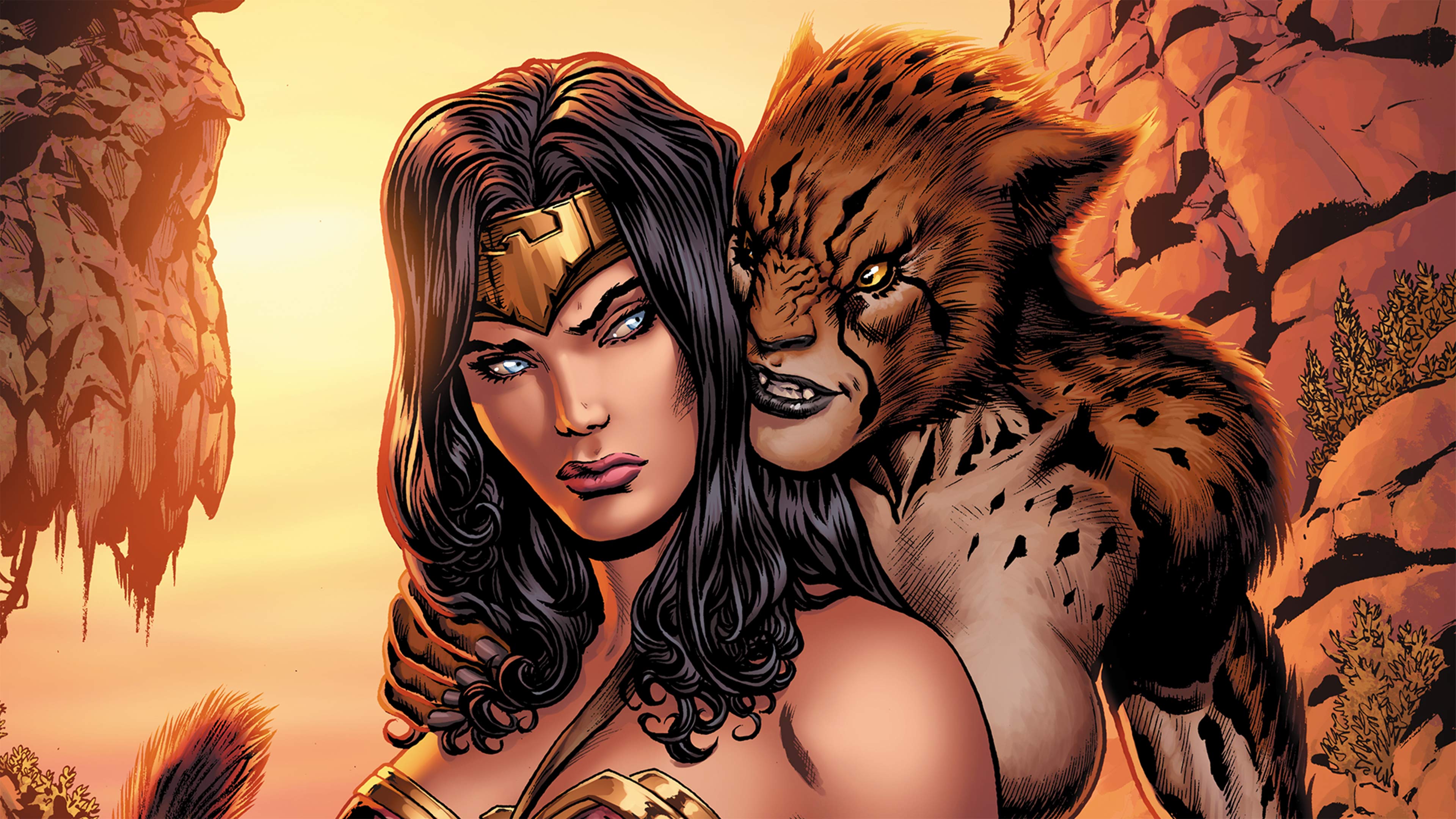 The 5 Lives of The Cheetah, Wonder Woman's Deadliest Enemy

It’s said that if you really want to know a person’s character, you should look to see who their enemies are. And of all the villains in Wonder Woman’s vast collection, none of them has been as persistent as that felonious feline known as The Cheetah. But of all the gods and witches and mad scientists to oppose the Champion of the Amazons over the years, how has this orange agent of evil stayed at the forefront since 1943? The answer may be this: understudies. Through the decades, there have been five entirely different villains to oppose our warrior princess under the “Cheetah” name. But just who are they, and how can one tell them apart? And which one is the “real” Cheetah? Consider this your handy field guide to spotting Cheetahs in the wild. 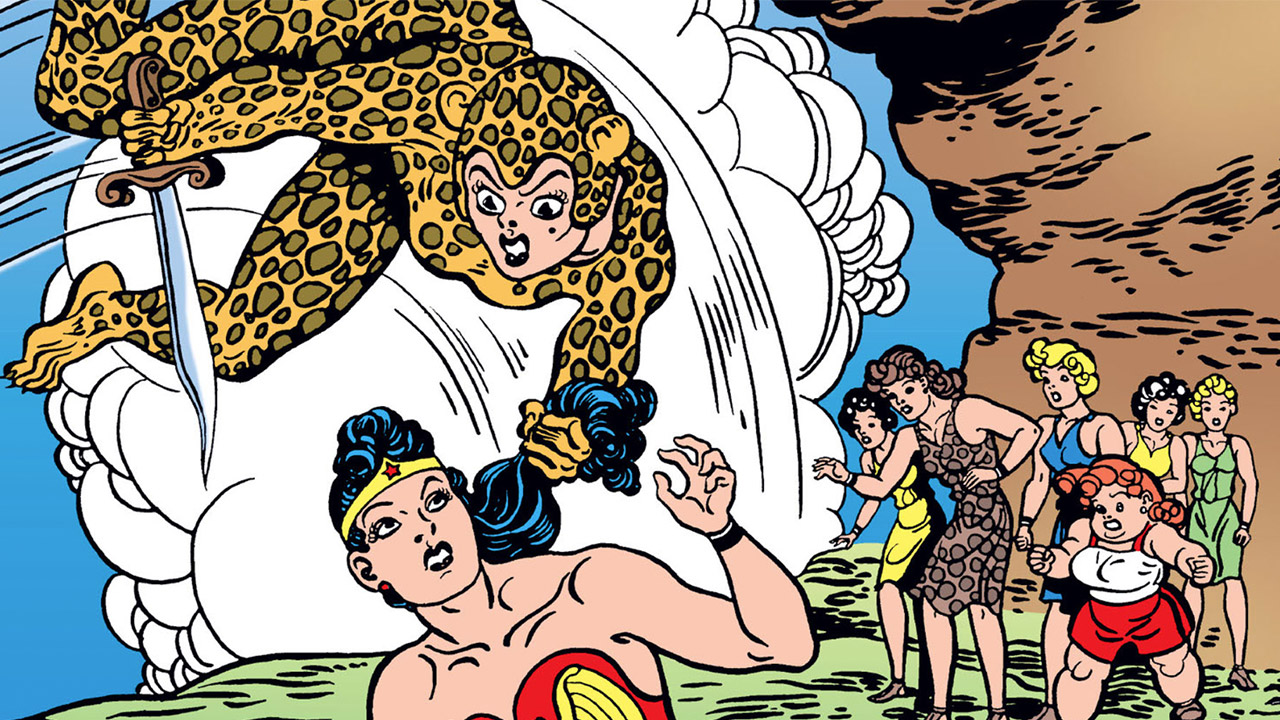 The original Cheetah is still the longest to hold the title — or at least she will be for another five years. Priscilla was a wealthy gadabout, thrill-seeking socialite, beloved by all for her beauty and charm. She also suffered from two major problems: a red-hot jealousy streak, and multiple personality disorder. When Wonder Woman made her debut in man’s world and became the talk of the season, Rich became so incensed that she developed a super-villain persona to dispose of her.

HOW TO SPOT: The face is the giveaway. Priscilla wears a full body suit, but keeps her face uncovered. 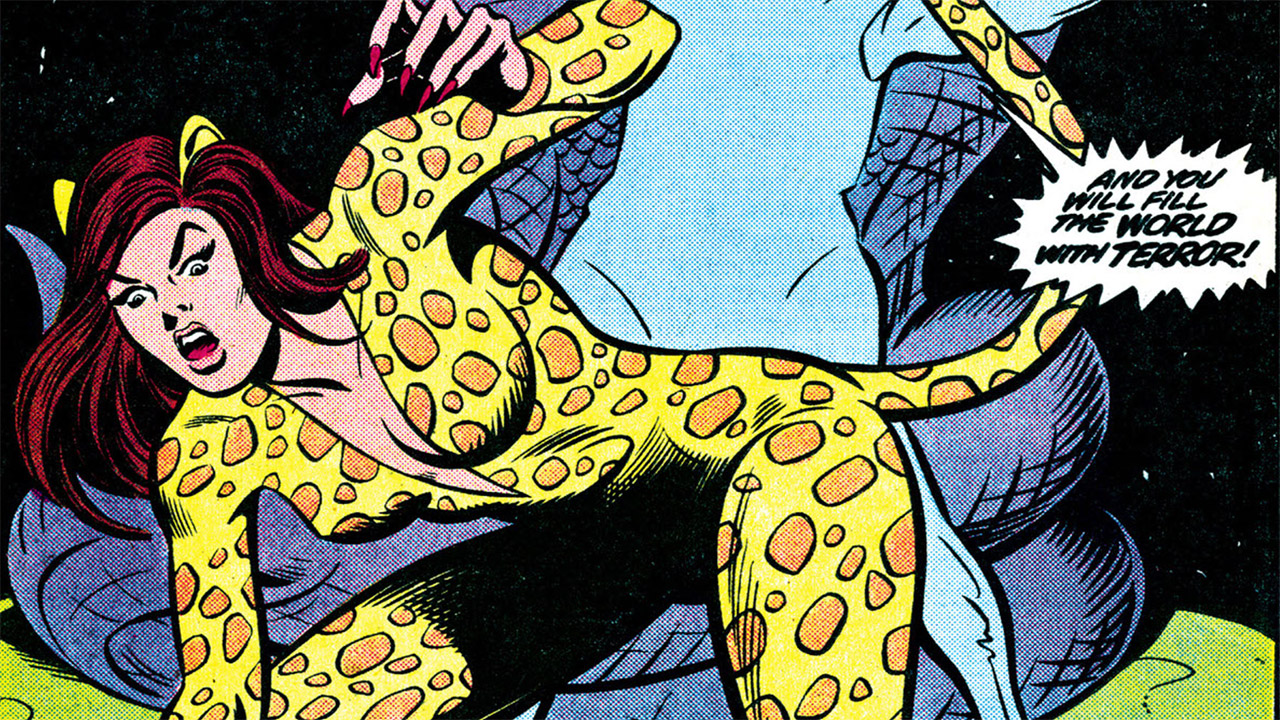 “Debbi” Domaine was the niece of the original Cheetah, raised in luxury by Priscilla after she retired from her super-villain career. Debbi’s endeavors as a young woman were far more noble than her aunt’s -- devoting herself to charitable works and causes. Until, that is, the international terrorist cult of Kobra kidnapped and brainwashed the heiress into becoming a Cheetah of their own.

HOW TO SPOT: Like her aunt Priss, Debbi likes to keep her face uncovered, but sports the embellishment of a plunging neckline. Not to blame her...it can get pretty sweaty up in those catsuits. (Why do you think Selina Kyle started cutting out armpit holes?) 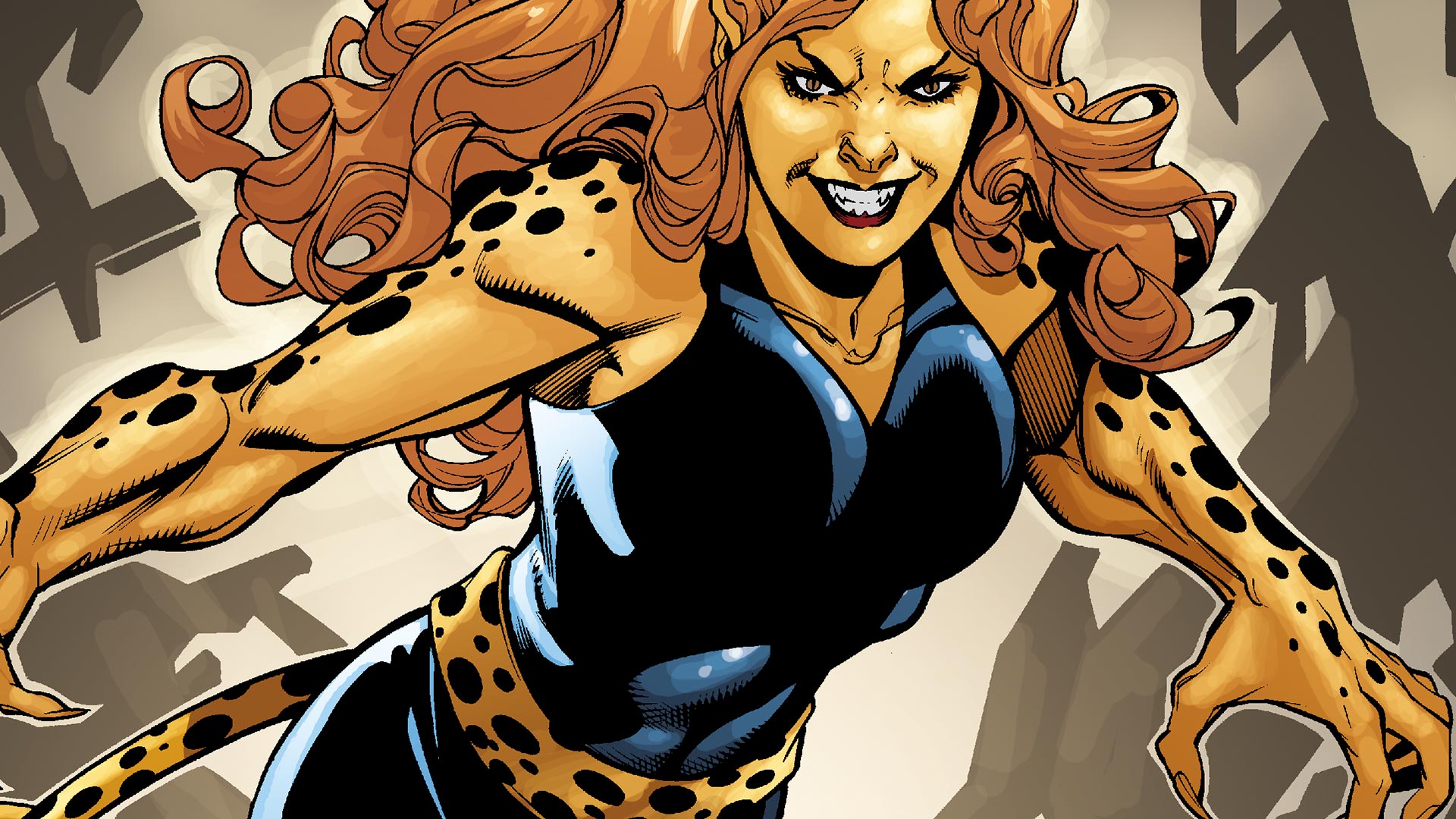 Though the third woman to hold the title, Barbara Ann Minerva was the first Cheetah to appear after the title was rebooted in Crisis on Infinite Earths — and to this day, she remains the most frequently appearing incarnation of Wonder Woman’s most dedicated enemy. In the New 52, “Priscilla Rich” and “Deborah Domaine” were even retconned as alternate identities used by Barbara Ann herself. Once a bright and daring archaeologist with a promising future, Barbara Ann fell into a raw deal with an ancient African plant god -- Urzkartaga, you know the one -- and transformed into The Cheetah, Urzkartaga’s bride and servant in the mortal world. Her first mission: to obtain Wonder Woman’s lasso. Diana and Barbara have been running at cross-purposes ever since. But as with so many of Diana’s enemies, Wonder Woman’s true goal is not to defeat this Cheetah, but to redeem her.

HOW TO SPOT: That’s no costume. If Cheetah’s face is as fuzzy as the rest of her, then we’re dealing with Ms. Minerva. 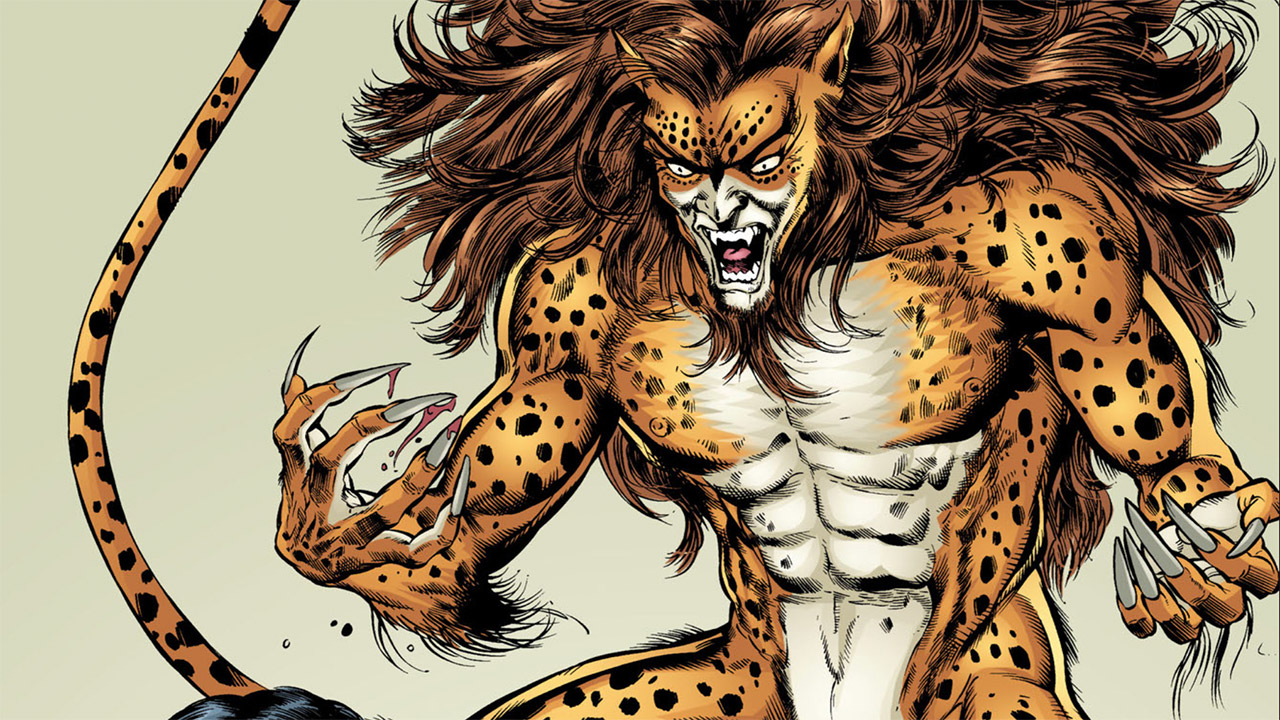 Aside from Cheetah, perhaps the most vexing villainess in Wonder Woman’s history is the sorceress Circe, the witch of ancient myth with a signature move of transmogrifying human subjects into her own animal hybrid slaves. One such servant was Sebastian Ballesteros, an Argentinian business tycoon, who took a brief turn at assuming the Cheetah mantle for himself — even appealing to the chauvinism of Urzkartaga for a while, arguing that a male agent would a more suitable representative of his power. But Barbara Ann killed this fool back in 2004 for stepping to her, and he hasn’t been back since. 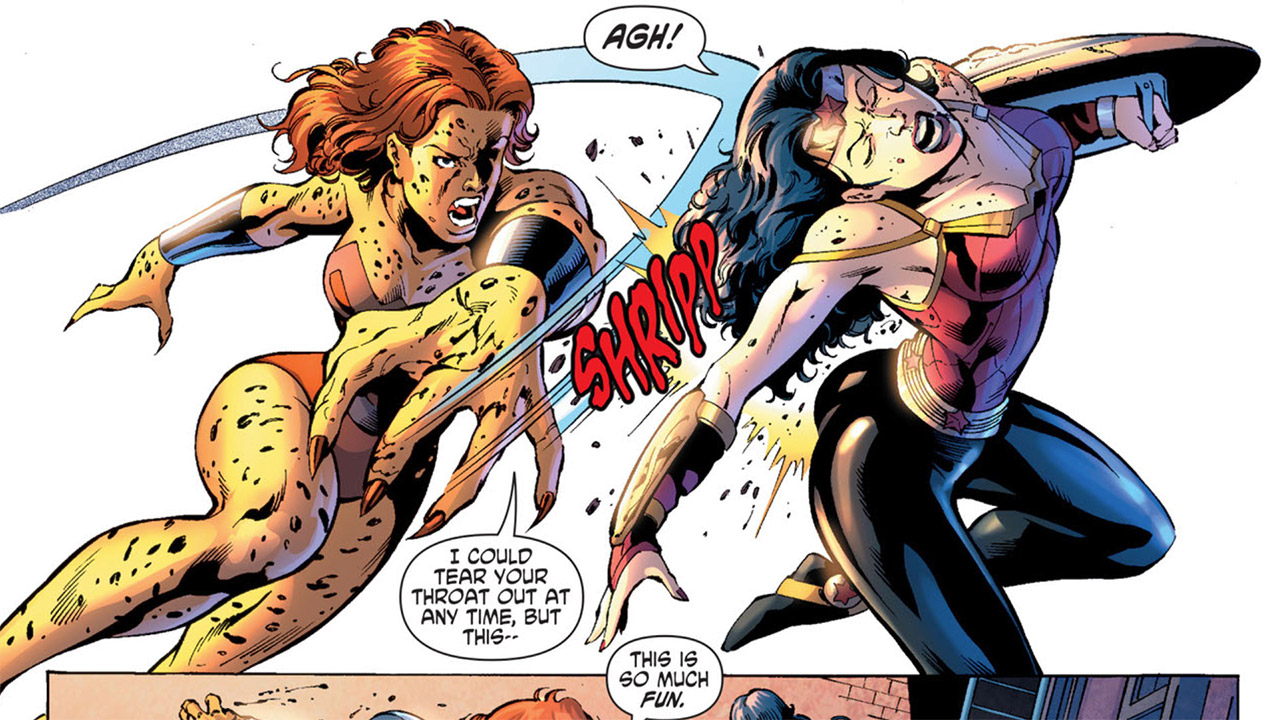 To commemorate the 600th issue of Wonder Woman (when all of her numbered titles thence far had been added together), and only scant months before the line-wide reboot of the New 52, writer J. Michael Straczynski changed up Diana’s entire history so nothing was as it seemed. In this new reality, The Cheetah was a nameless Amazon warrior who was raised from the dead and infused with an ancient spirit by The Morrigan, a coven which sought to eliminate all Amazons from the world, as their personal huntress — starting with Diana.

HOW TO SPOT: Is Wonder Woman wearing pants? Then this is Morrigan Cheetah.

Well, that’s 5 lives down, and 4 to go, if the old cat legend is to be believed. With over 75 years of history already under The Cheetah's fur, it may be some time before we see them all in action. But no matter what form she takes, you can rest assured that Wonder Woman will always be the one to claim victory.

After all… Cheetahs never prosper.