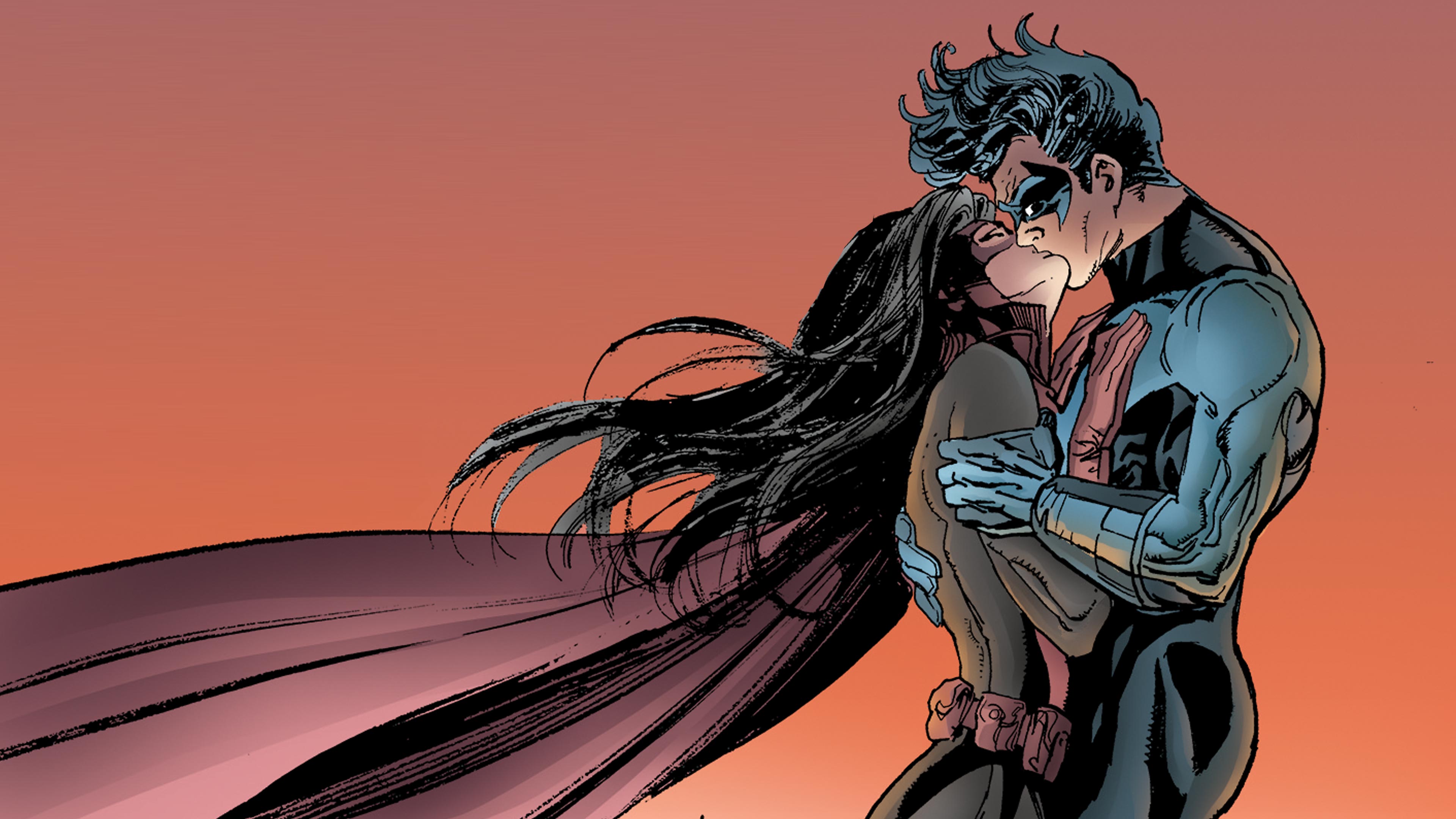 Who is the best Robin? Would it be ethical at this point to kill The Joker? Who would win in a fight: Batman or Superman? All easy questions in the DC fan community as a whole- cakewalks, really- compared to one particular point of contention that burns hotter than Earth's yellow sun: who is Dick Grayson's one true love? For most people, the answer comes down to Barbara Gordon- Dick’s on-and-off love interest through Batman Family titles since, well, 1975’s ‘Batman Family’- or Koriand’r, the Tamaranean princess whose relationship has grown and developed with Dick as members of the New Teen Titans since 1980.

But as the DC Universe’s most eligible young bachelor, Dick Grayson’s little black book extends far beyond the Batgirl and Starfire. Here are just five of Dick’s love interests over the years who just weren’t cut out for more than a fling. 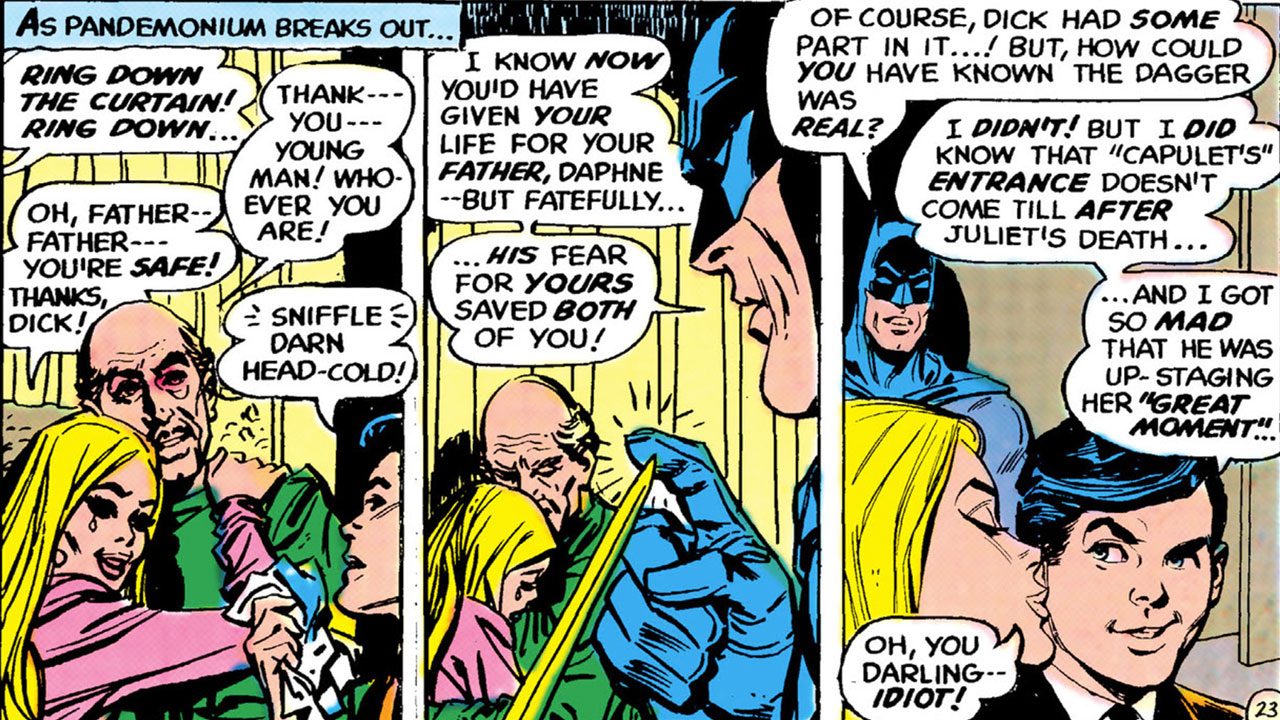 Alfred Pennyworth’s young niece was a girl who followed in her uncle’s footsteps, pursuing the stage acting career of Alfred’s own ambition in his younger days. On a trip to visit her uncle, Daphne enjoyed a brief flirtatious relationship with Bruce Wayne’s ward — but was discovered to be using them as part of a con by her theater troupe to steal an old folio of ‘Romeo and Juliet’ from Bruce’s collection. Seems like a dealbreaker to us, but hey: Bruce himself has been dating a burglar for decades now. 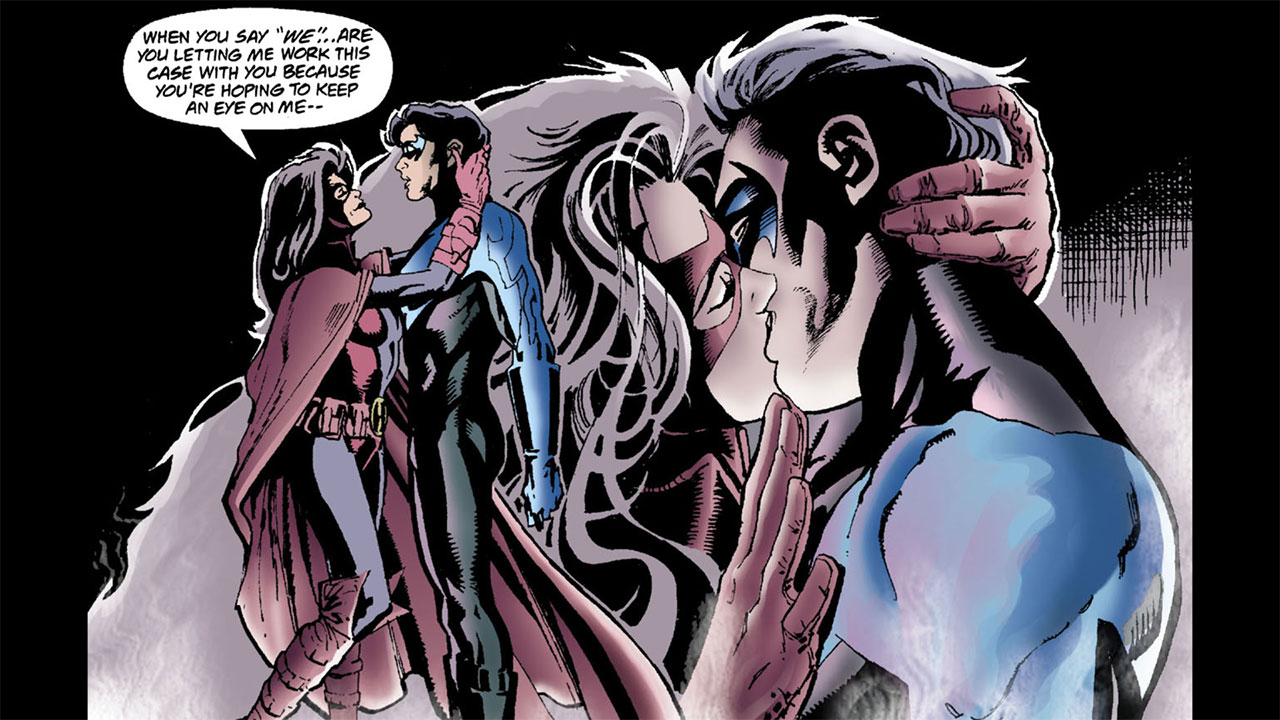 The Question, John Constantine, Catman… former mafia princess Helena Bertinelli’s colorful life as a vigilante has certainly been peppered with a long string of ill-advised hook-ups. But the longest and most fraught of them all may have been with Dick Grayson, with whom stakeouts gave way to makeouts in the ‘90s, much to the chagrin of basically everyone around them. While the physical chemistry between them is explosive, emotionally speaking neither does any big favors for the personal demons of the other. Tom King and Tim Seeley reunited this mismatched pair in the ‘Grayson’ series of The New 52, as super spy coworkers in flagrant violation of company policy. Rule #1 of spycraft: check your emotions at the door. 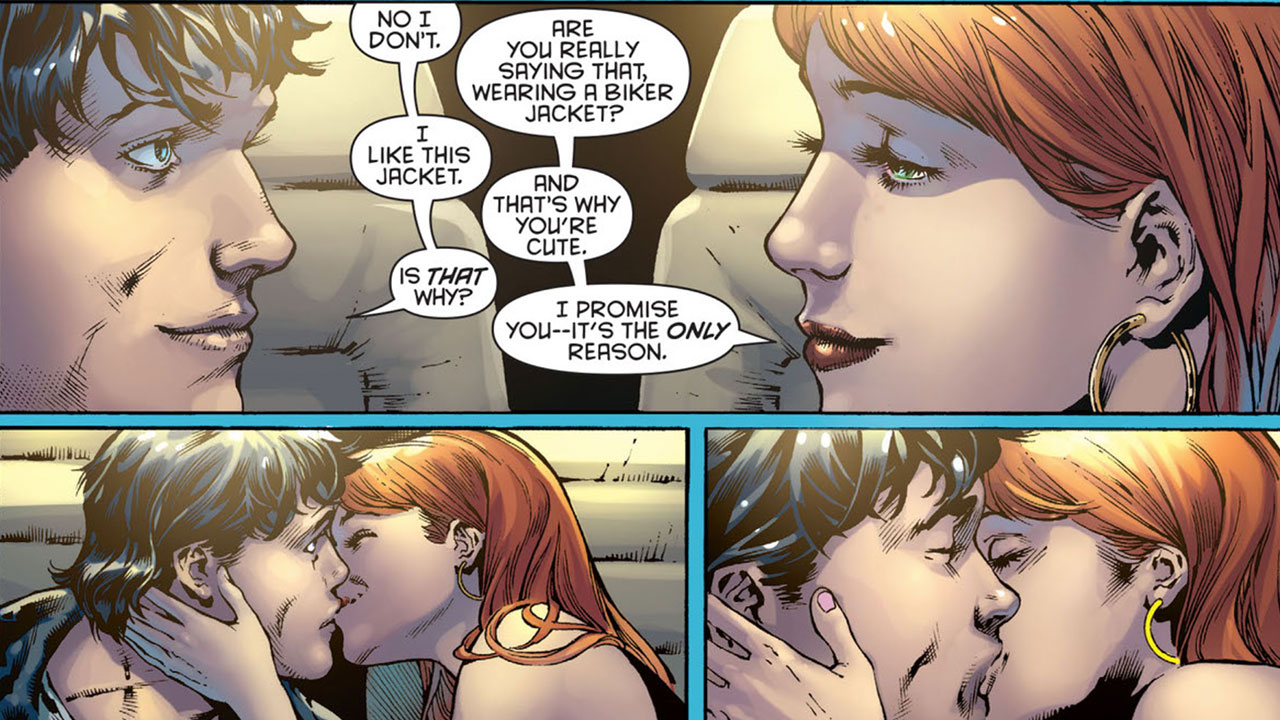 Professional acrobat Raya Vestri was introduced in The New 52 as Dick Grayson’s childhood sweetheart, growing up together as showbiz kids in the traveling Haly’s Circus. Though briefly reunited by the death of Mr. Haly, who entrusts the circus’s future to Dick, he is eventually betrayed by Raya who was revealed to have been working with fellow circus kid turned Super-Villain Saiko to engineer Dick’s demise. Though Raya seems conciliatory as Saiko’s scheme unfolds, her potential path to redemption is cut short when she meets her end at the hands of The Joker. 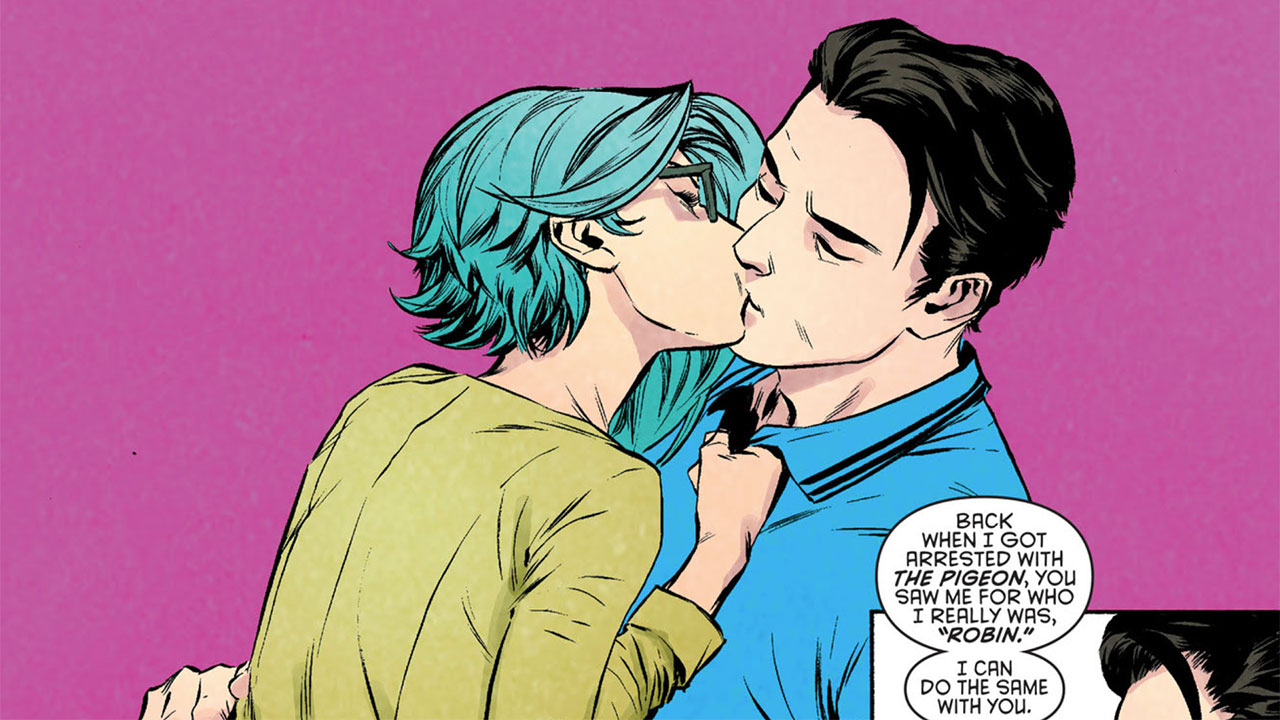 The street tagging artist Shawn Tsang was once the young accomplice of The Pigeon, a villain from way back in Dick’s tenure as Robin. Desperate for new direction in his own life, Dick moved back to Blüdhaven in the “Rebirth” era to rediscover the one-time “Defacer” as the leader of a support group for former super-villains and henchmen looking to go clean. Things got quite serious between them as they sought redemption in each other’s arms, but after a pregnancy scare and a kidnapping by Professor Pyg, Dick and Shawn parted ways to pursue their own paths. 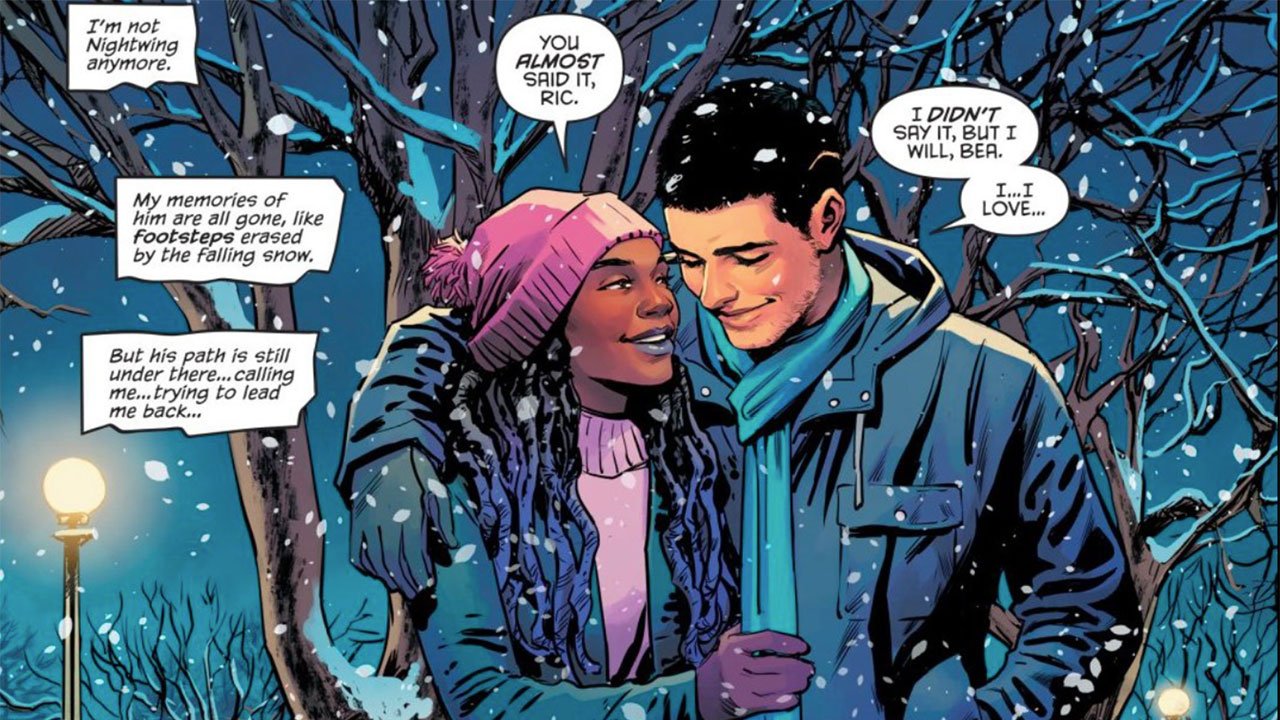 Nearly one year ago, Dick Grayson took a sniper bullet to the head, courtesy of KGBeast. For a while, it didn’t seem like Dick was going to make it — and, for the moment, it can be argued that he still hasn’t. Though Dick got out of his hospital bed, he suffered a severe amount of memory loss which also resulted in a drastic shift in his own personality. Now going by “Ric” Grayson, the amnesiac former Nightwing has returned once more to Blüdhaven to discover what it means to be himself without any emotional connection to the Bat Family. During this time, he’s begun a relationship with Blüdhaven bartender Beatrice “Bea” Bennett. But when Ric’s memories return… which should be… any day now… will his current fling survive the revelation? Vegas money says no. So while this relationship has not yet failed, we would say: just you wait.

Who are some of your favorite Nightwing hookups? Talk about it in our Community?