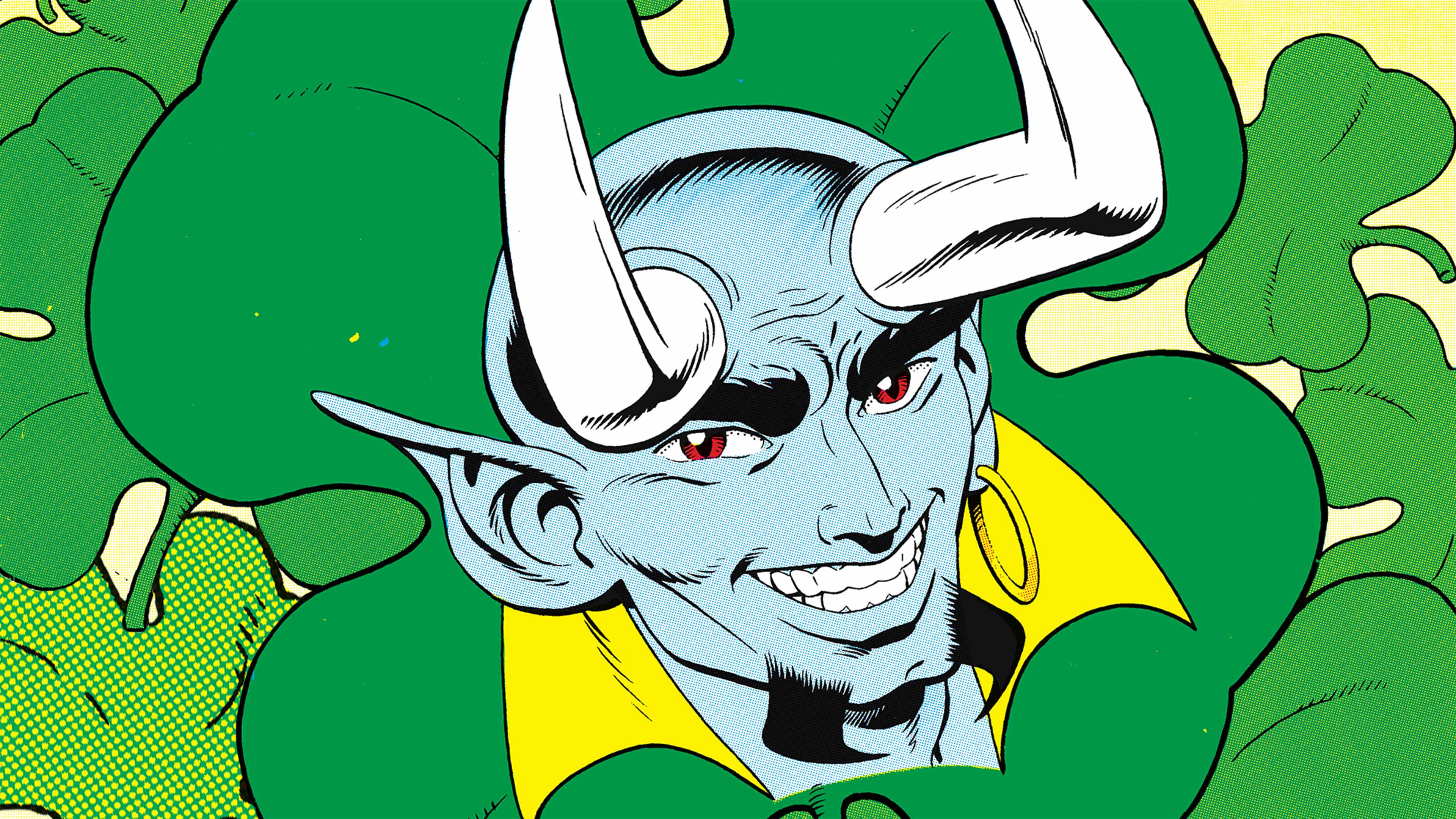 Who is that lurking in the shadows? It’s not Batman, it's not the Question, it’s a leprechaun! Today is St. Patrick’s Day, so it’s important to look out for those mischievous fellas. Who knows, they might lead you to their pot of gold. Some of you might be skeptical about the existence of leprechauns, but in a world with Kryptonians, Amazonians, and Kite Man, it’s not that far-fetched! In fact, there have been numerous leprechaun sightings throughout the DC Universe. To celebrate St. Patrick’s Day, here are 5 DC Universe leprechaun encounters… 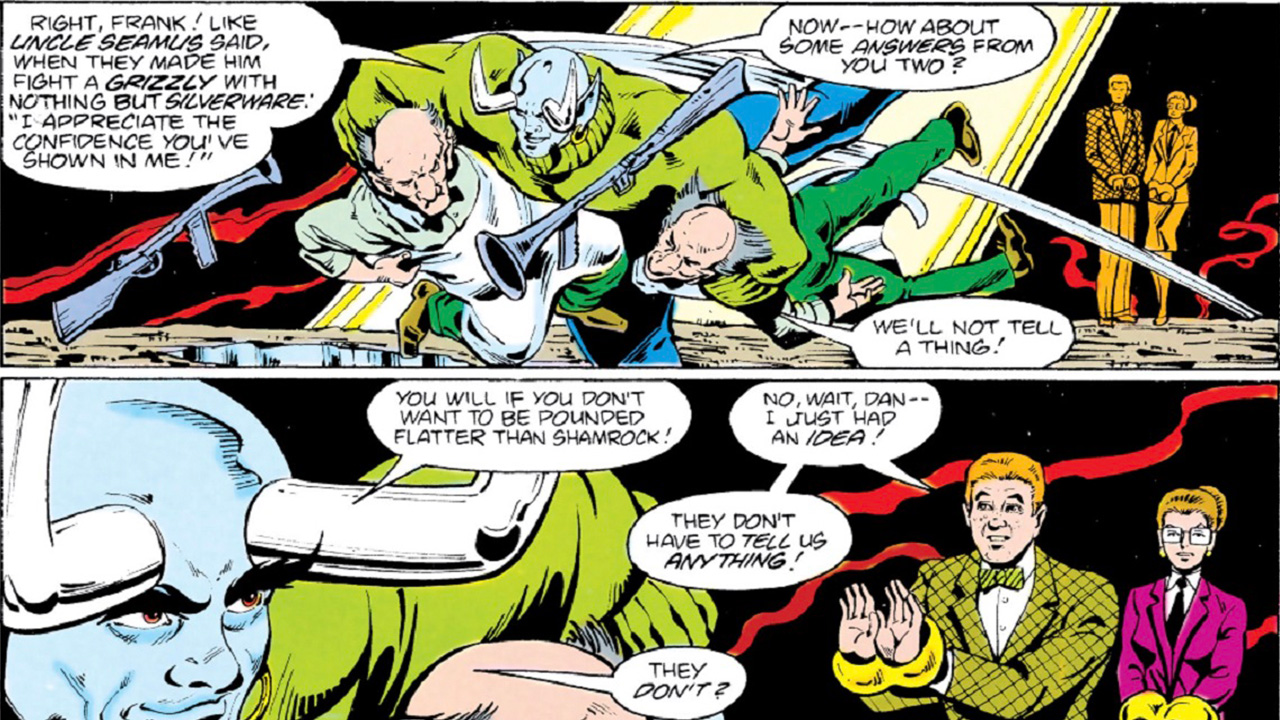 The Story: Blue Devil and Jimmy Olsen team-up to take on a terrorist cell made of leprechauns. These tiny terrors got tired of not being taken seriously so they sought to remake the world, and show the human race they meant business. If you think leprechauns are creepy, then imagine how chilling a leprechaun terrorist is! The story also contains a surprise twist as Blue Devil learns that his uncle Seamus is part-leprechaun.

Where the Leprechauns Were Hiding: The basement of an Irish pub.

Pots of Gold: These leprechauns used their pots of gold to fund a superweapon made from Alec Holland’s bio-restorative formula.

The Story: Wonder Woman’s friend falls down a hole in a tree and finds a secret colony of leprechauns. The leprechauns are mad that Etta won’t share her candy, so they get their revenge by using Wonder Woman’s lasso to make Diana hop around their underground cave. Also there’s a Nazi hiding in the caverns. Golden Age Wonder Woman is wild.

Where the Leprechauns Were Hiding: In their secret underground society called Shamrock Land, which can be accessed by falling through a hole in a tree.

Pots of Gold: Their village had lots of gold, which they used to create golden hammers, so they could build shoes. Regular hammers would’ve worked just as well, but why use regular hammers when you can make footwear with golden ones?

“THREAT OF THE TRUE-OR-FALSE SORCERER” 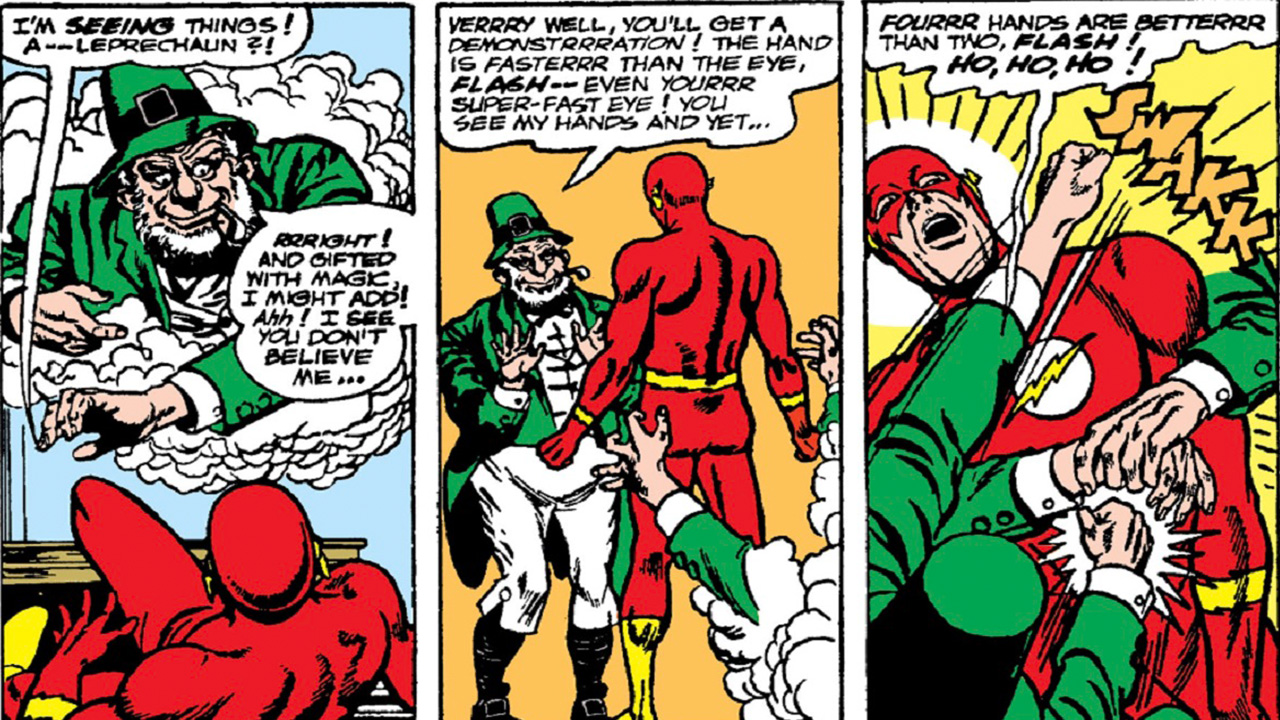 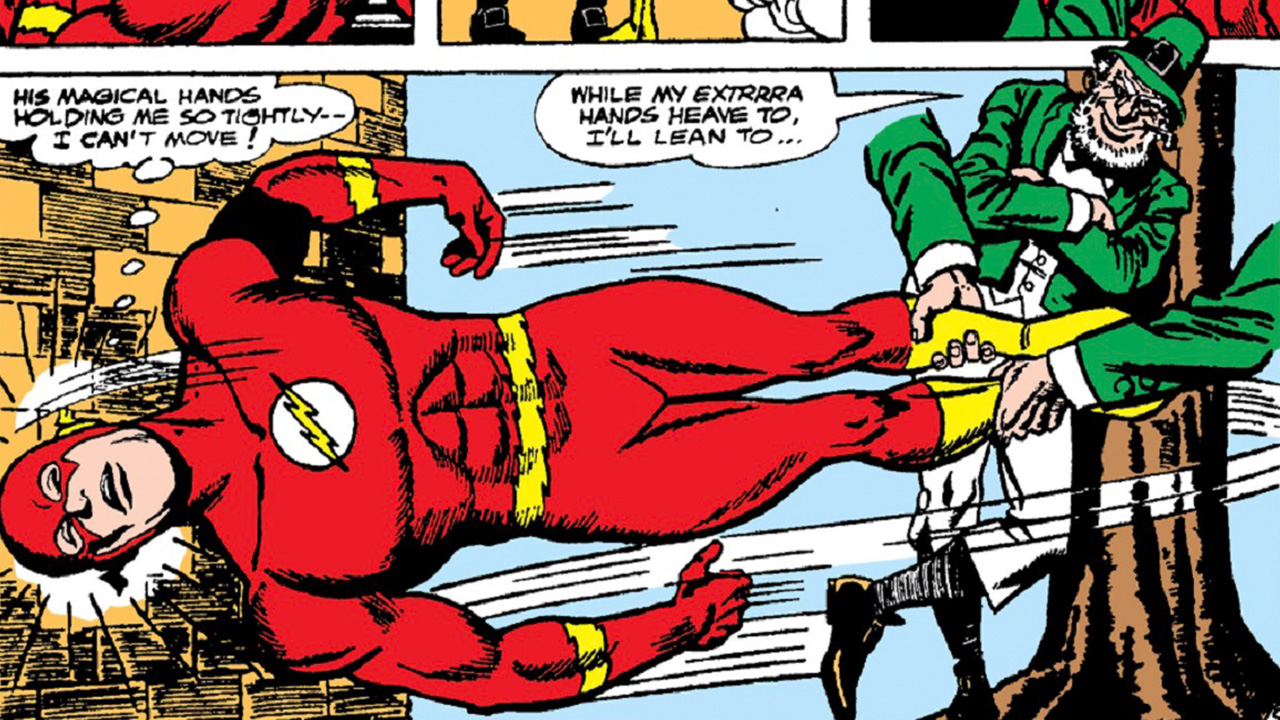 The Story: The mystic villain Felix Faust creates a double of himself, which gives him an identity crisis. Things spiral out of control, and the sorcerer tries to solve his problems by conjuring a group of magical creatures, including an angry leprechaun. The leprechaun takes on the Flash, and his speed his surprising to the hero. Flash has trouble keeping up with the leprechauns rapid punches, but is eventually able to land a good hit.

Where the Leprechaun Was Hiding: Conjured out of thin air by Felix Faust.

Pots of Gold: This punchy fella didn’t have any pots of gold, but he did offer the Flash some “headache pills” after walloping him. 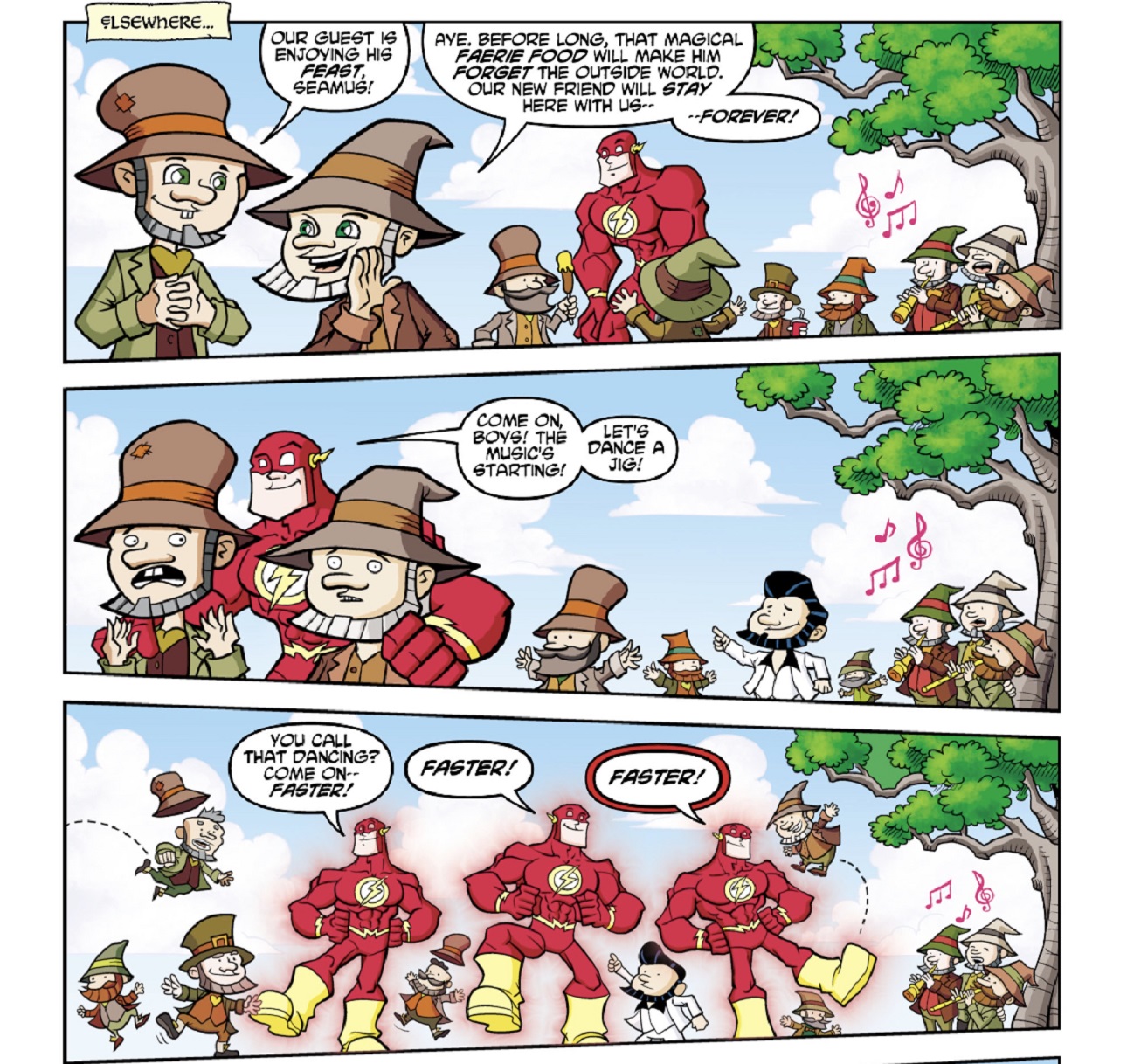 The Story: The Queen of Fables trapped the Justice League inside of a storybook, where the Flash was befriended by a gang of leprechauns. The tiny souls loved the Scarlet Speedster, and tried to use food to coax him into staying with them. Flash knew the food would hypnotize him, so he resisted the allure of the sweet Irish pastries.

Where the Leprechauns Were Hiding: No hiding here, just having a fun dance party with lots of tasty treats!

Pots of Gold: No pots of gold, and judging from the images, it’s probably because they used it all to fund their foodie lifestyle. 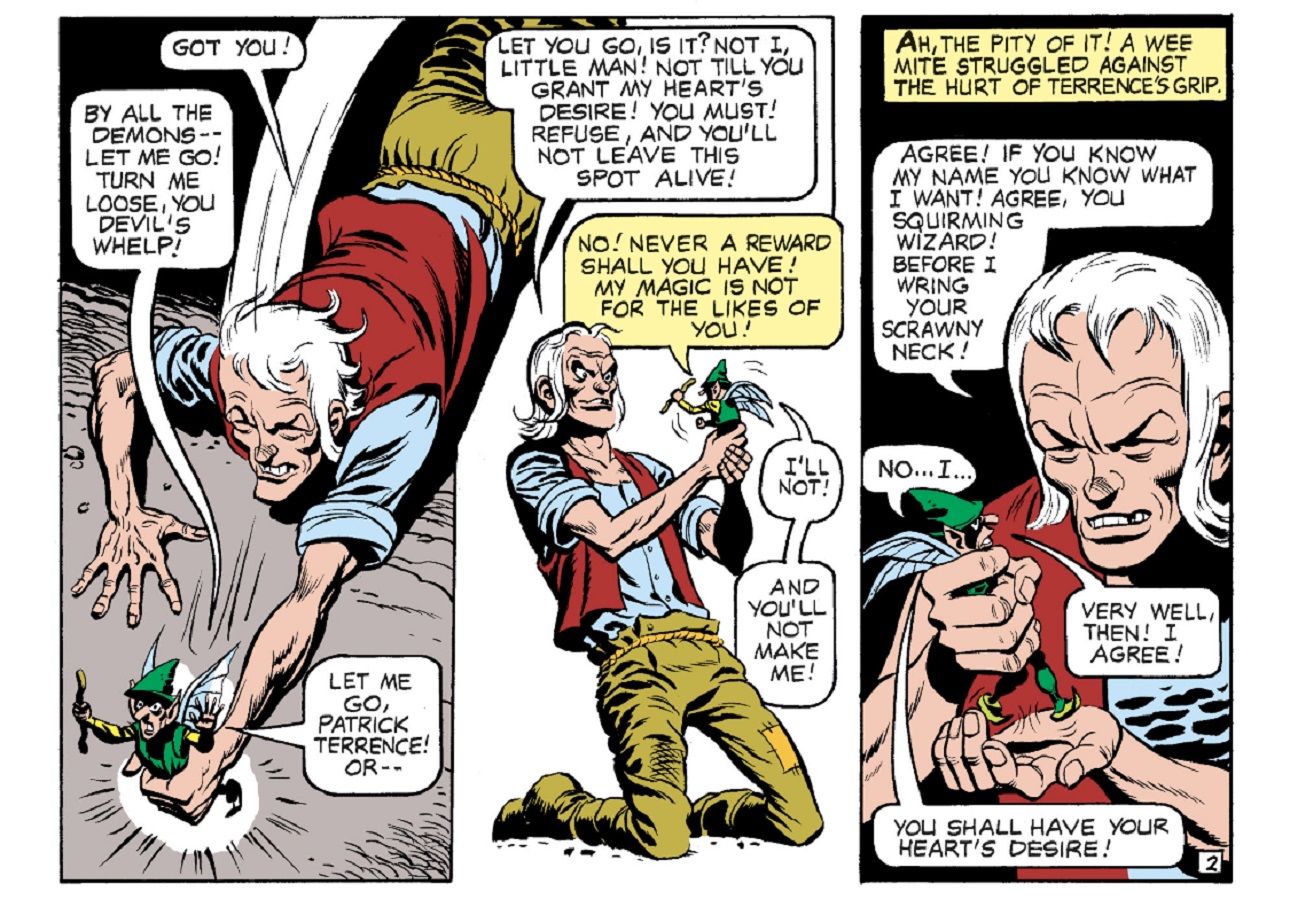 The Story: An impoverished man named Patrick Terrence catches a leprechaun in the woods, and demands that he grant him a wish. The leprechaun complies, and Patrick soon finds that his life is getting better, until his greed causes everything to crumble.

Where the Leprechaun Was Hiding: Deep within the woods of Ireland.

Pots of Gold: This leprechaun does lead Patrick to a fortune, but be careful what you wish for, because horror stories always have a twist!

HONORABLE MENTION: According to Green Lantern: Ganthet’s Tale, Earth leprechauns are descendants from Oa’s Guardians of the Universe. This technically means that most Green Lantern Corps books can be considered leprechaun encounters.

We’ve also received a request from Mister Mxyzptlk and Bat-Mite, who want people to stop asking them for their pots of gold. Mxy and Bat-Mite are imps, and not leprechauns. They may be short, and they may be pranksters, but they aren’t leprechauns and they’re tired of having to explain it. Thank you for coming to our TED Talk.

Would the Justice League improve if they had a leprechaun on their roster? Let us know on our Community!