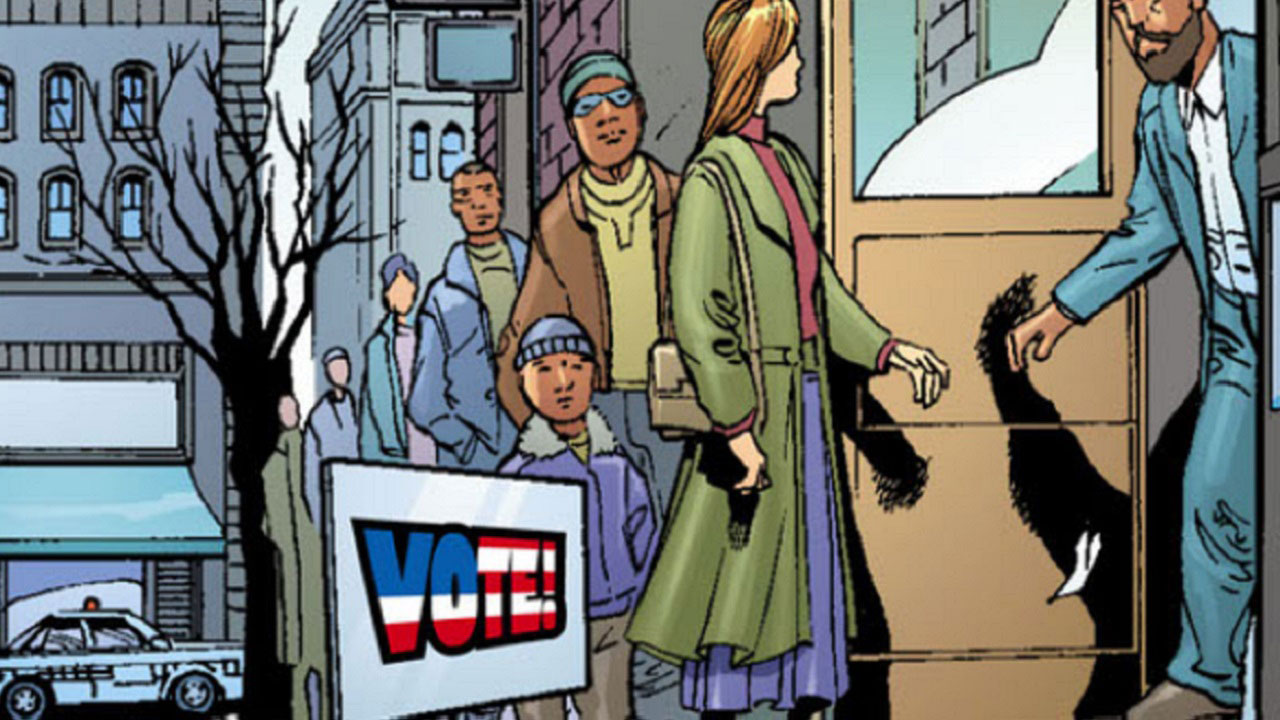 5 DC Moments to Get Out the Vote

Superman can melt metal with his eyes, Wonder Woman can deflect bullets with her bracelets, but every one of us has a power even greater – the power to vote! Voting can fundamentally change everything about your life, and elections have consequences. But the power only works if you use it, which is why it’s important to go vote! Tuesday, November 3rd, is election day in the United States, and hundreds of millions of people are choosing their lawmakers – will you be one of them? If you need some motivation, here are 5 DC moments that may inspire you to get out the vote! 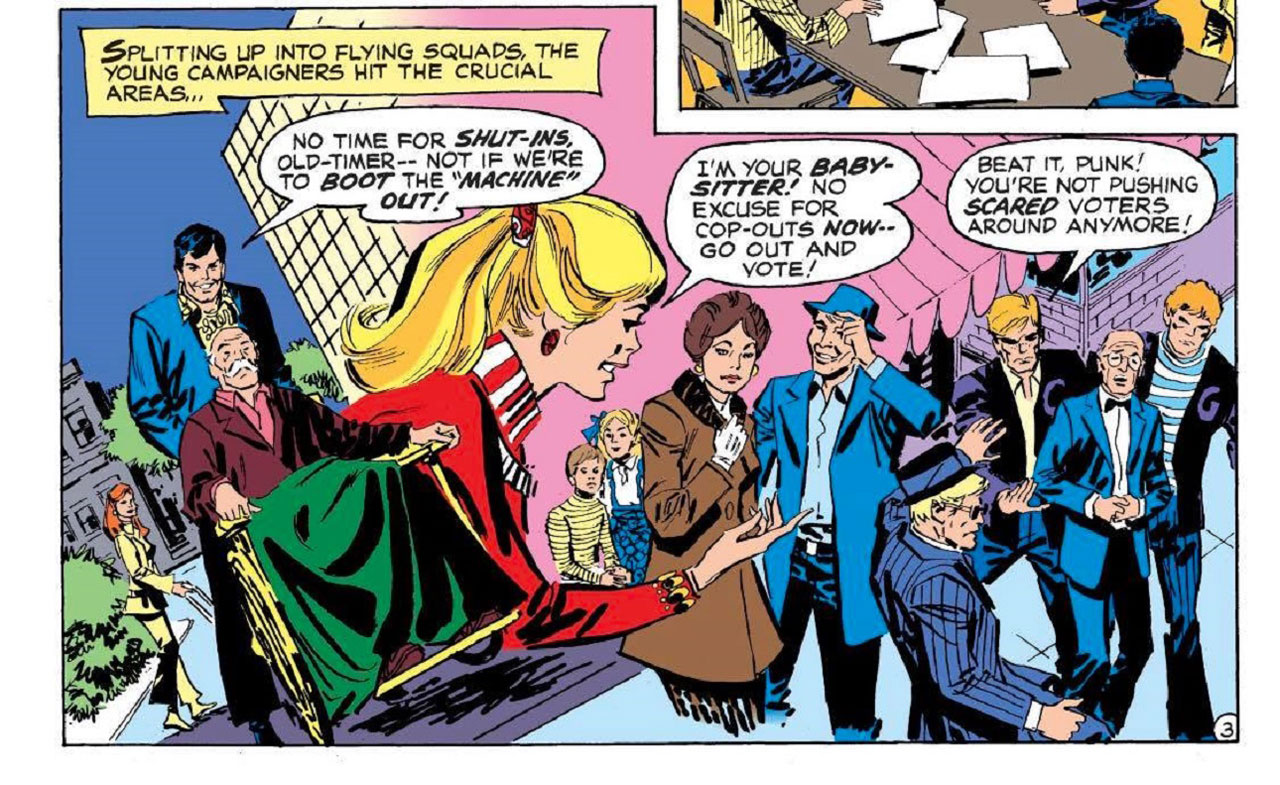 Being a superhero is extraordinary, but in Detective Comics #422 Batgirl realized that running for office is the best way to make a lasting change in her community. Barbara Gordon decides to run for congress, but a candidate is nothing without their voters. As a result, Barbara runs an aggressive “get out the vote” campaign in Detective Comics #424. Young campaign volunteers make sure that senior citizens have rides to their polling places, and babysit the children of busy parents. Phone calls are made with the goal of “multiplying her vote by thousands.” Thanks to the youth volunteers, and Barbara’s resonating message, Gotham City has their biggest voter turnout in years! Batgirl might not be on your local ballot this election, but it doesn’t make the messsage any less important – voter turnout makes a difference! Be a part of the process, and get to your local polling place. 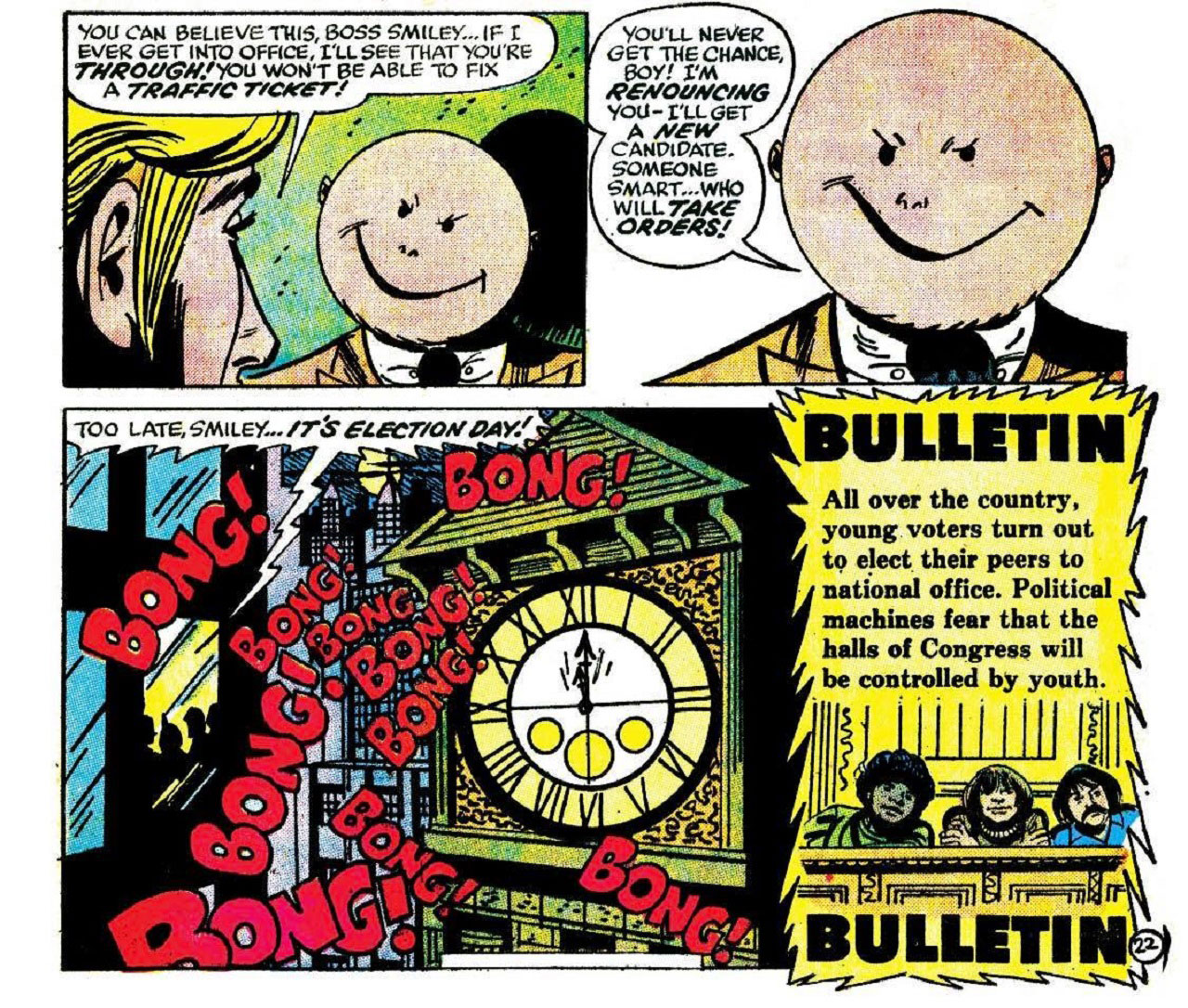 Prez Rickard is not an ordinary teenager. When the clocks in his town are broken, he personally repairs every single one. Sensing Prez’s potential star power, a corrupt mogul named Boss Smiley recruits the teen to make a senate run, hoping Rickard will be his puppet. When Prez learns of Smiley’s corrupted nature, he's more determined to win his senate seat. Prez wants to be a voice for the voiceless, and kick corruption out of Washington, even if elite members of the corporate world are against him. Not only does Prez win his senate seat, a later election makes him President of the United States! He makes his mother the Vice-President, which is just about the sweetest thing we’ve ever heard. To find out what happens when a teenager is elected president, read the 1973 series Prez. 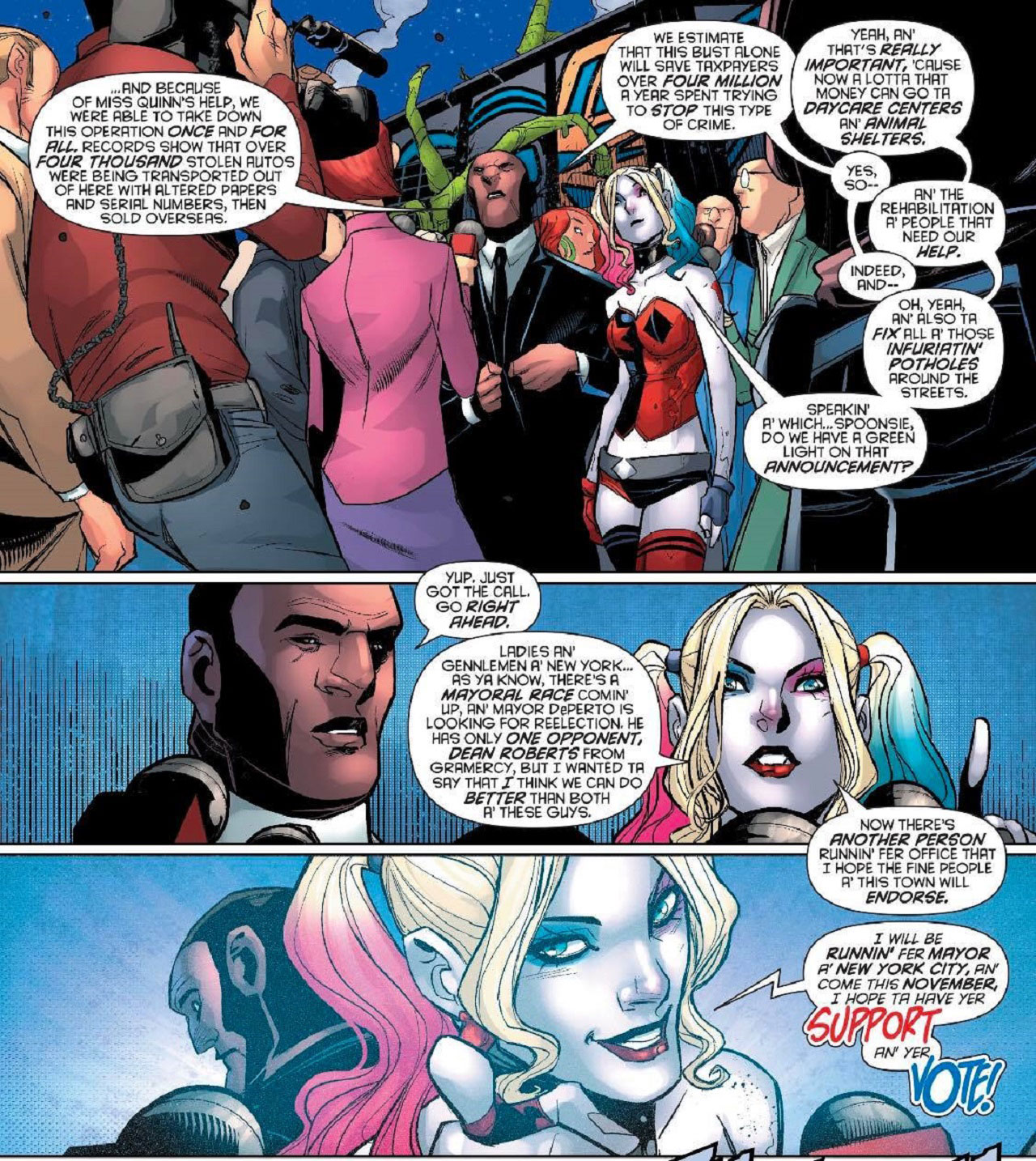 Harley Quinn might be a certifiable screwball, but even she knows the importance of voting. In 2017’s Harley Quinn #28 the Lady of Lunacy shocks the world when she announces she's running for Mayor of New York City. During her nutty campaign, Harley does everything to show voters she isn’t going to be a typical candidate. For example, she decides to make good on one of her campaign promises early, by using Poison Ivy’s powers to put more plant life in the city. Harley reasons that most politicians don’t make good on their pledges until after they’re elected, but Ms. Quinn is ready to put her money where her mouth is. That’s why voting is important – it’s us as constituents putting our money where our mouths are. If we’re not happy with the way things are being run, voting's the best and easiest way to make a change. As for the Lady of Lunacy’s campaign, you can see how that roller coaster turned out by reading 2017’s Harley Quinn #28-32.

YOUNG JUSTICE FOR ALL 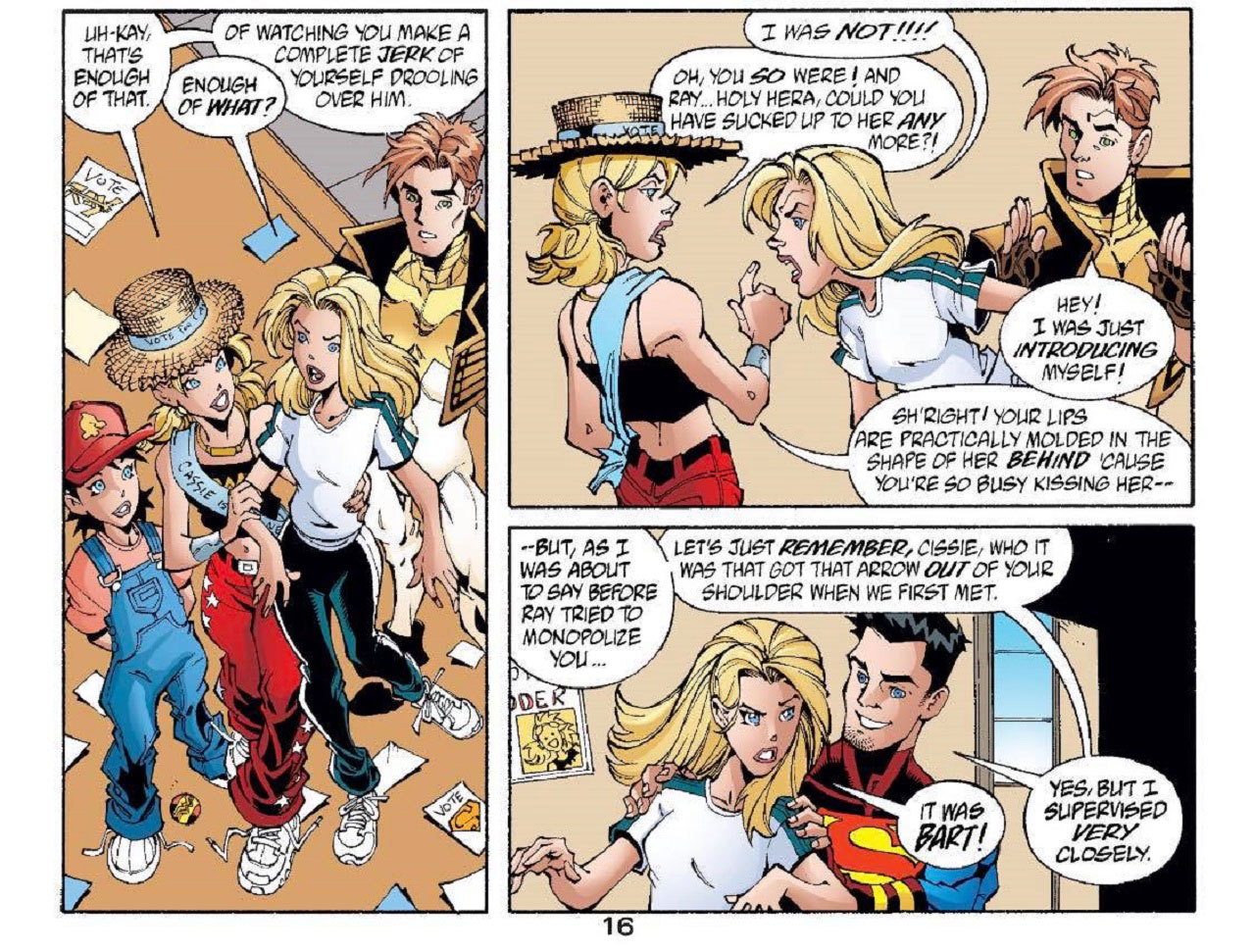 In Young Justice #46 the titular team of teenage heroes have a dispute over who will be their leader, and they decide to settle things by holding an old-fashioned election. The young heroes get caught up in the process, making campaign paraphernalia and aggressively encouraging their friends to vote. Poor Cissie King-Jones has the shock of her life when she stops by their headquarters and immediately has every candidate trying to win her favor. Robin, Superboy, Wonder Girl, and the Ray resort to every dirty trick in the book to get Cissie’s tie-breaking vote, and in the end they become disillusioned with the democratic process. Nevertheless, they persist with the election and Wonder Girl becomes their new leader. The moral of the story? Elections may take a lot out of you, but don’t let yourself get discouraged. The democratic process only works if you vote, so make sure you do it for the sake of your country! 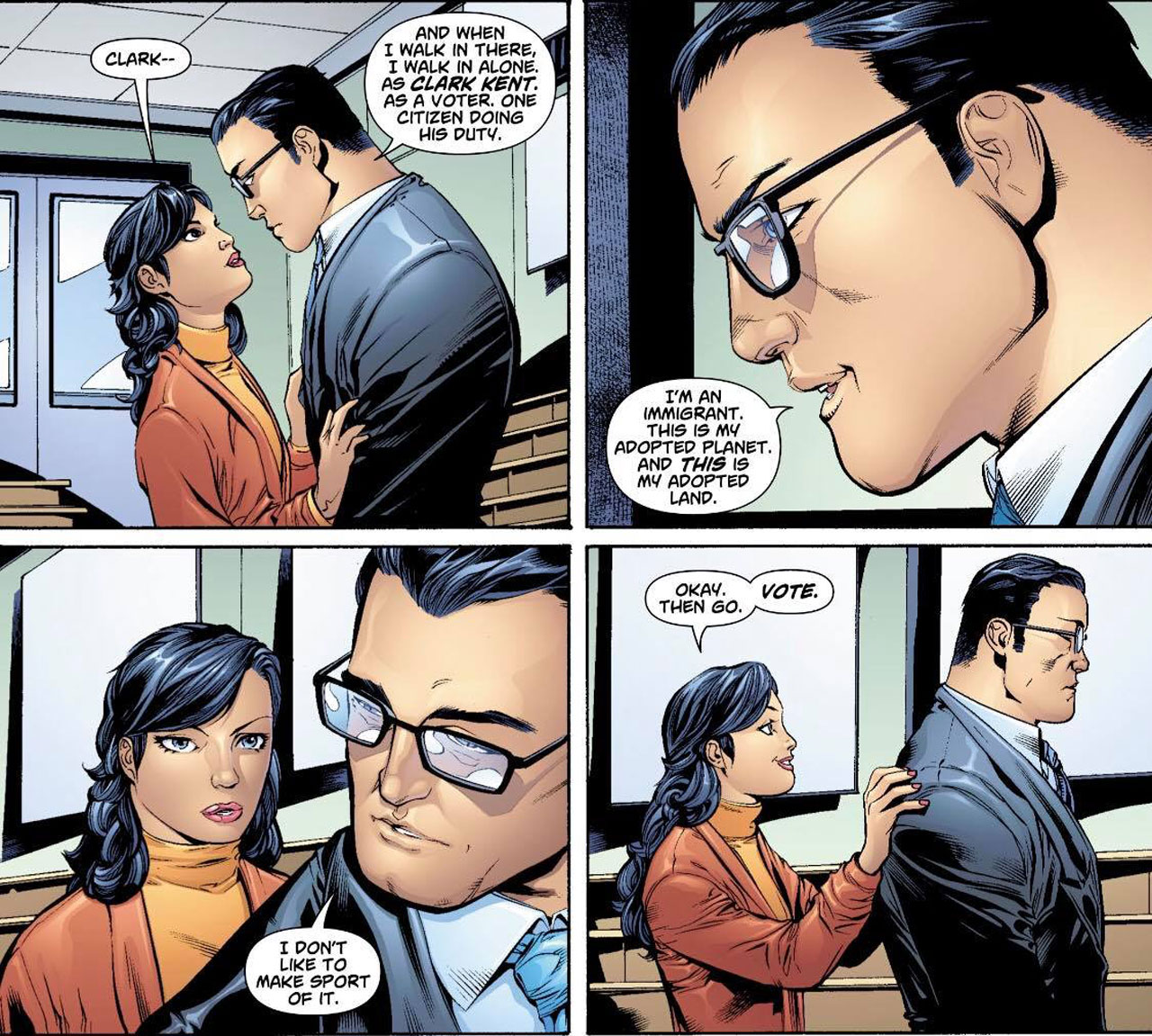 Superman has many powers, but none as powerful as the ability to vote. His strength can be used to lift a city bus, but it can’t shape amendments or decide who our lawmakers will be. This is made clear in the limited series DC Universe: Decisions, which focuses on the effect superheroes can have on presidential elections. During the final chapter, Superman explains to Lois what voting means to him in a heartfelt speech: “When I walk in there, I walk alone. As Clark Kent. As a voter. One citizen doing his duty. I’m an immigrant. This is my adopted planet. And this is my adopted land. I don’t like to make sport of it.”

So don’t let Superman down -- get out there and vote!

Have you made a plan to vote yet? Let us know in our Community!