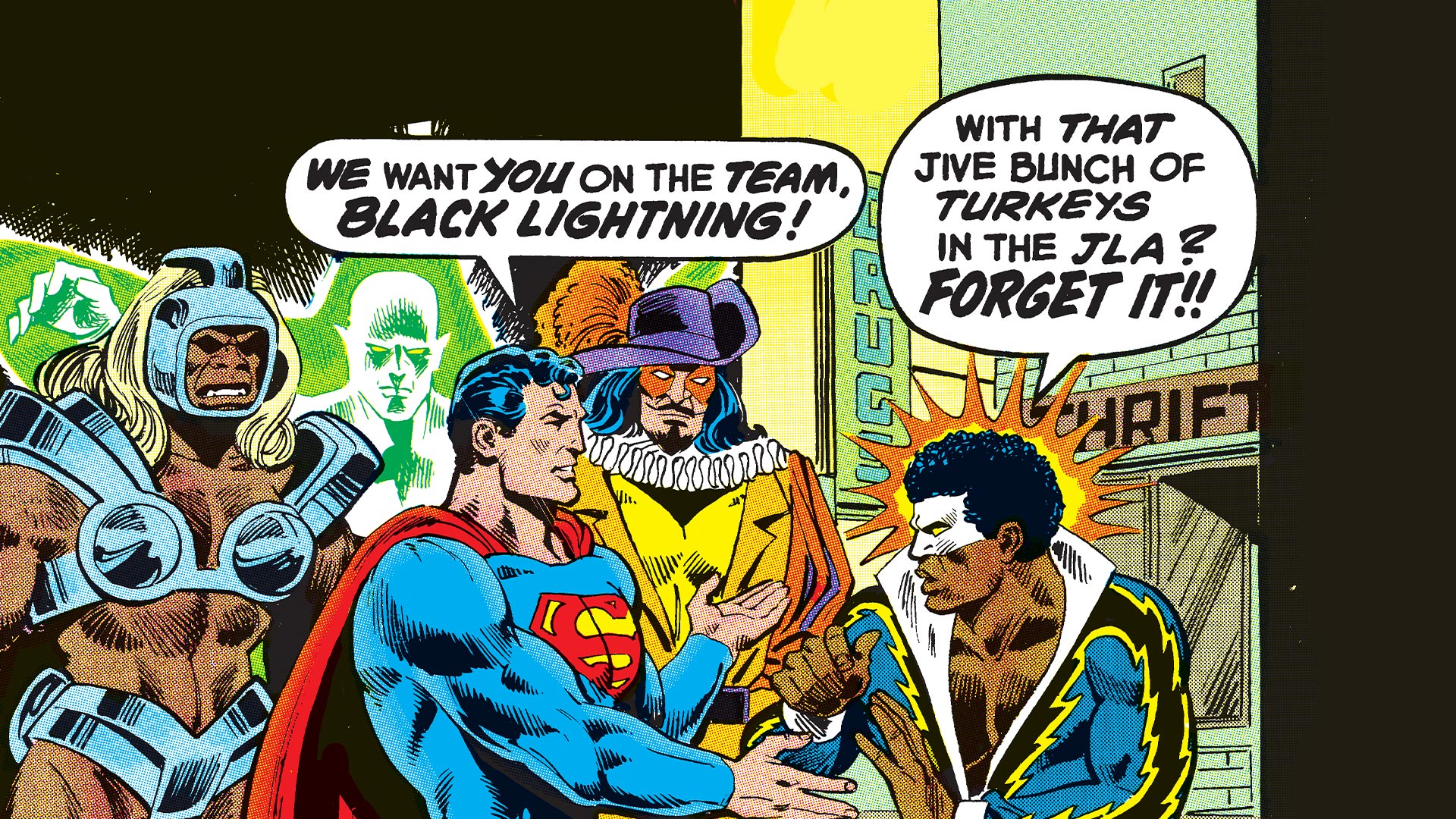 Throughout DC’s storied history, we examine 5 times when the creators and characters made race real for their black readers.

As with all fiction, superhero media has run the race of minority representation in fits and starts. In DC Comics, black characters were introduced in earnest in the early '70s with characters such as Mal Duncan, John Stewart, and The Black Racer. Inclusion is good, but consistency is better, and that’s difficult to find in the early attempts at black representation. For instance, an early story featuring Mal Duncan had him chased around by the ghost of a slave owner. John Stewart had a memorable first appearance in Green Lantern/Green Arrow #87, only to disappear for years at a time. And then there’s Tyroc, an infamous inclusion to the Legion of Super-Heroes that the creators themselves reportedly weren’t very proud of.

Representation is only meaningful when it’s accurate. Color-blind writing risks falling into problematic storytelling, making diversity perfunctory. So we can appreciate the times throughout DC history when the creators and characters made race real for their black readers. Let’s look at a few examples when they did just that. 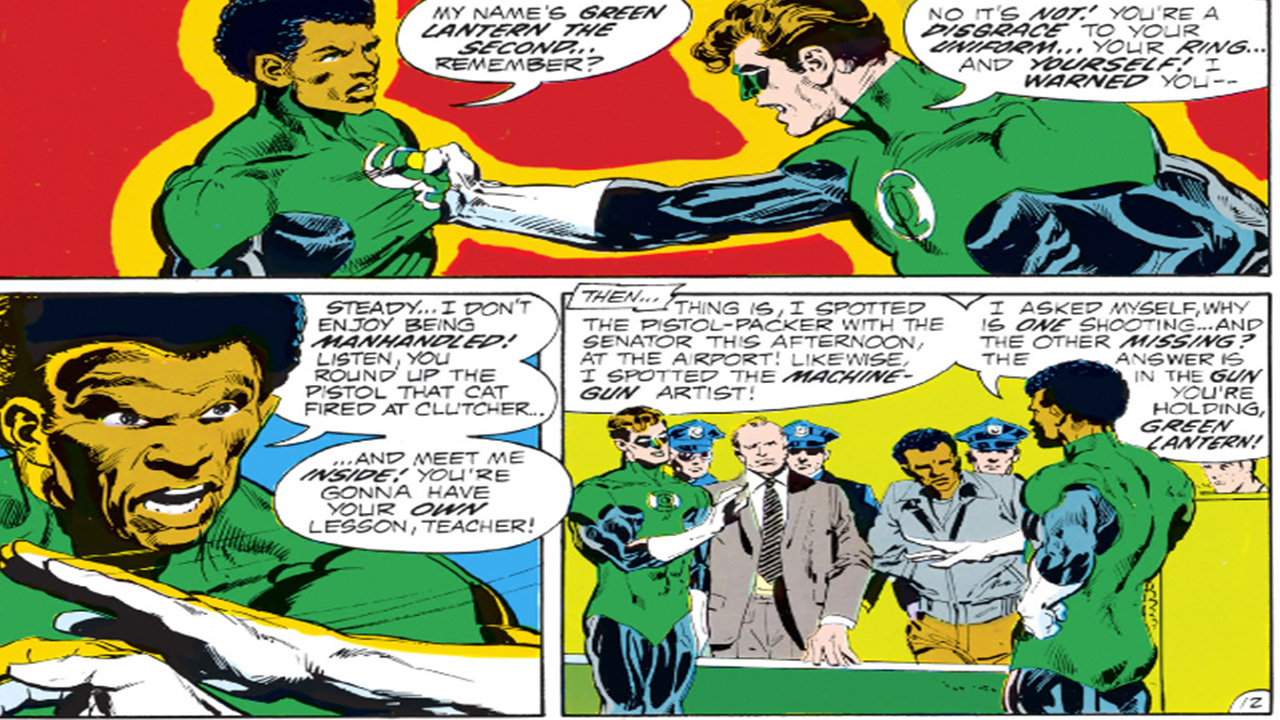 We’ve talked before about this particular Green Lantern, but there’s a lot to take from his early days. In John’s first appearance, he saw the Power Ring as an opportunity to root out real crime and corruption. Hal Jordan first mistook him for arrogant, angsty, and stubborn. But the difference in perspectives meant the saving of lives when John saw a faked assassination attempt from a corrupt senator as the start of a potential race war This became a trend with John throughout the years. While Hal spent his career battling his own inner demons, and Kyle Rayner fought to make himself worthy of the Green Lantern legacy, John sought to use his powers responsibly, even when he wasn’t an active Lantern. He took care of the assimilated alien world Mosaic, watching over different alien races, and later became a member of the Darkstars – a galactic peacekeeping force. This made him a hero to look up to, from future Green Lanterns to Static, as depicted in the Static Shock season four episode “Fallen Hero.” 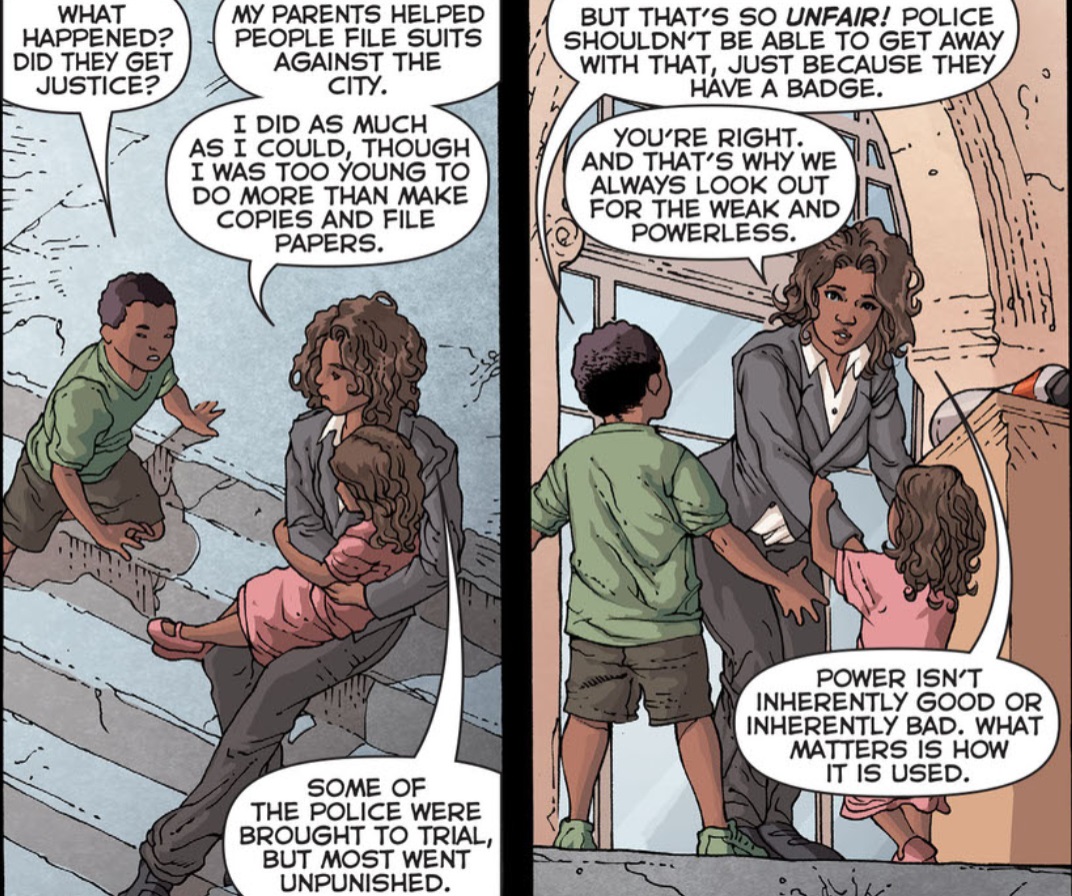 In the New 52 era, we saw what informed John’s moralist beliefs. Green Lantern Corps #25 (2011) depicts him as a young marine, remembering the teachings of his community organizer mother during the "Zero Year," when he saved lives by disobeying command. Authority and threats from authority have surrounded him all his life, but John Stewart has historically used those instances to follow what he saw was the right path to justice.

Black Lightning: His Own Man

Jefferson Pierce became Black Lightning to help clean up his neighborhood in Suicide Slum. Battling the crime gang The 100, he made enemies with both the mob and the police, who saw him as a harmful vigilante. Soon Black Lightning caught the interests of the JLA, who considered him for membership. Green Arrow believed his qualifications, including his race, would benefit the team. The Flash, however, wasn’t interested in bringing in heroes simply on the merit of their race. The team decides to “test” the hero, by disguising as villains and attacking him on his way home. When Black Lightning successfully defended himself, he was less than impressed with the League’s patronizing attempt to qualify him, and shoved their offer back in their faces. 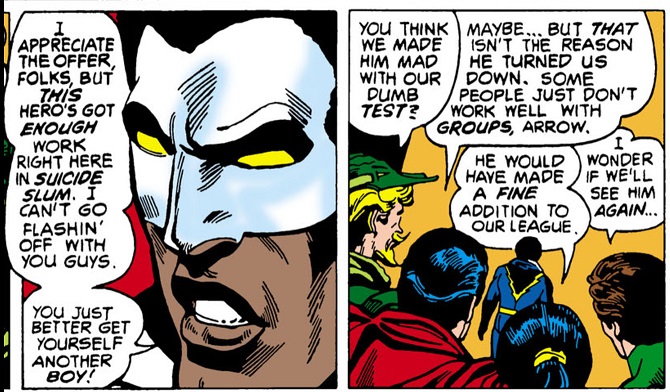 Though Pierce would later join the JLA, his wariness of the other heroes’ intentions would follow him throughout his career. He joined Batman’s Outsiders team in the 1980s, and recently did so once more. But those experiences have left him even more affirmed to only trust himself, remembering his first impression of the DC heroes as one of duplicity.

When John Henry Irons took upon his specially created armor to battle crime in the wake of Superman’s death, some people thought he may have been imbued by the very soul of Superman. Since then, Steel has fought not only to protect his family and his streets from evil, but to stay true to his ideals and not succumb to the presumptions of others. There’s lots of homogeneity in the superhero genre, among many different mantles, identities, and universes. Becoming a member of the Superman Family helped place Steel north in that direction, but is he just like Superman? People took issue over his use of the red cape and “S” shield, asking if he had Superman’s permission to use them. 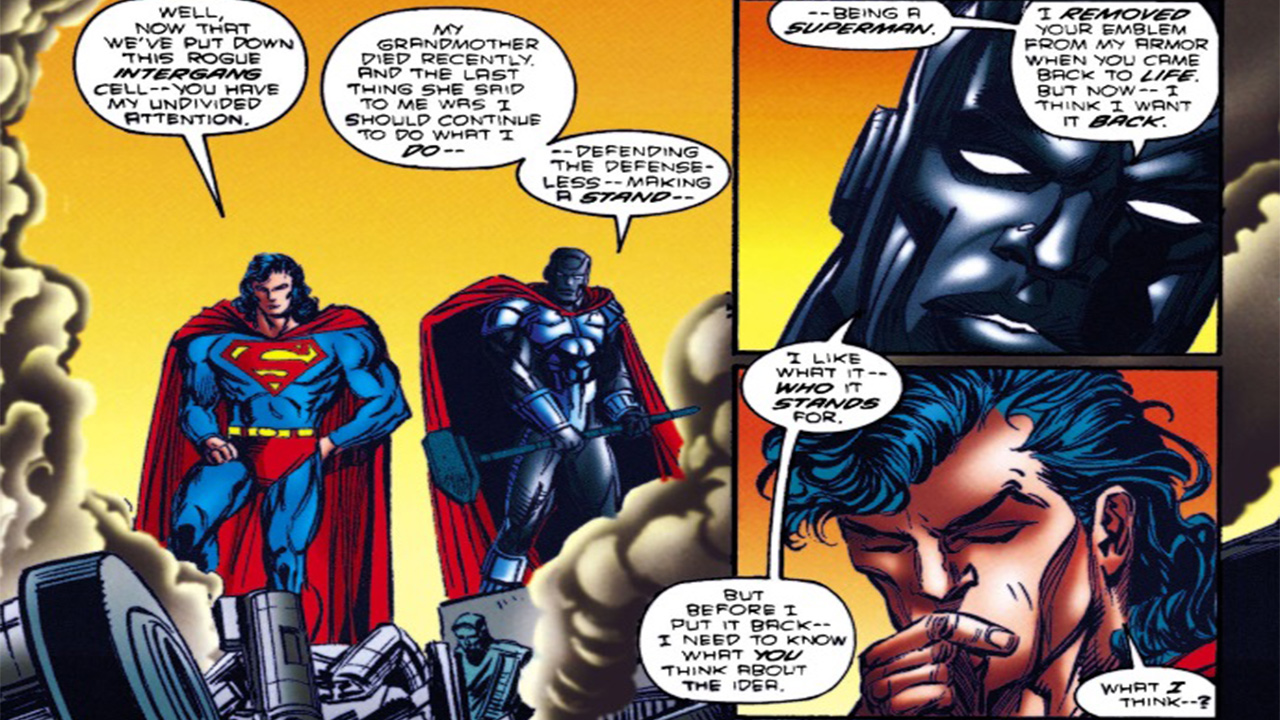 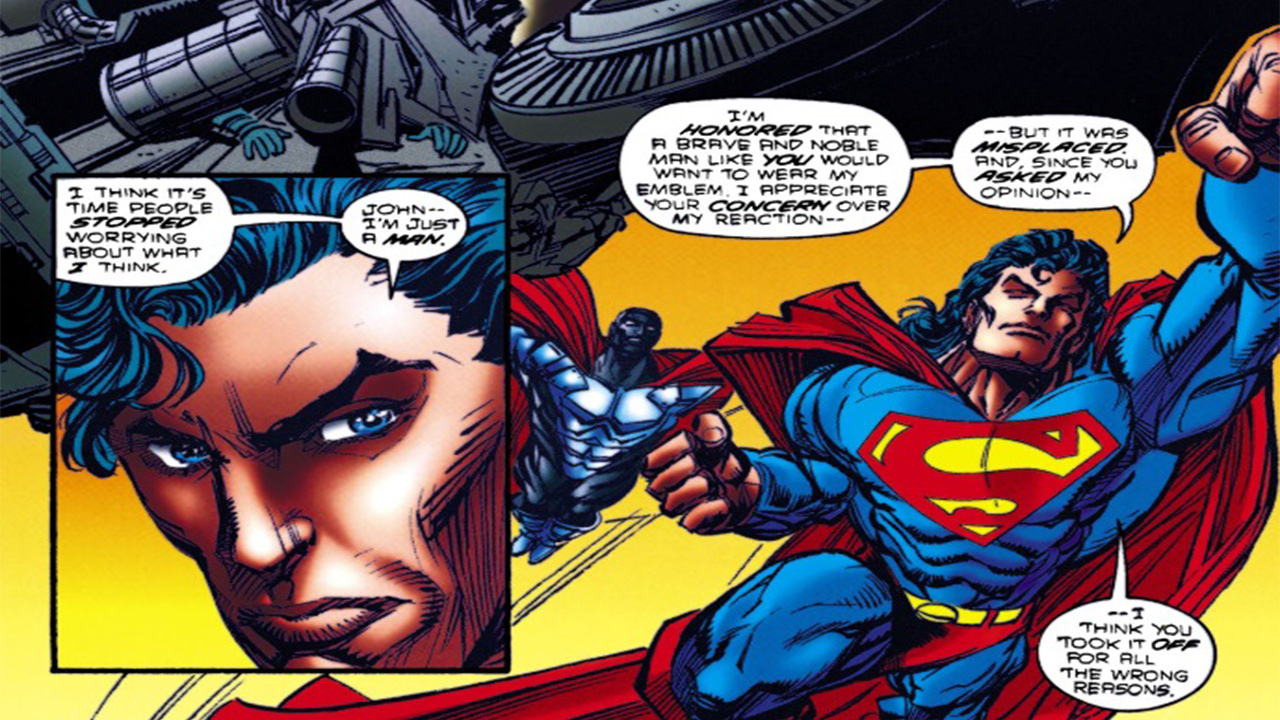 There are obvious parallels to Affirmative Action and the cause for Black Americans to be twice as good as whites with this example. Once Superman returned from the dead, some people didn’t find the need for Steel to stick around, even if he moved away from Metropolis. Others didn’t expect much from him at all, hoping to label him a menace to further their own agenda. In Steel #25, he’s arrested after publicly battling the villain Hazard, and reveals his identity in the hope of giving people a name to know. But this only causes media harassment and attempts on his life, one of which results in the death of his grandmother. Everyone sees John as a cog in their own personal cause, using his superhero identity or technological brilliance for their own goals. It’s a similar track with the Milestone hero Hardware, who teamed up with Steel in the Worlds Collide storyline. Here, John found a darker image of himself who was willing to kill to exact justice. Eventually Steel centers himself after moving to New Jersey and becoming the head of a medical center previously ran by a villain. He joins the Justice League and is even made the reserve leader when the original seven members go missing. Despite everything he's endured, from imposter syndrome to being hunted as a criminal, John has created his own worth and proved he is his own hero. 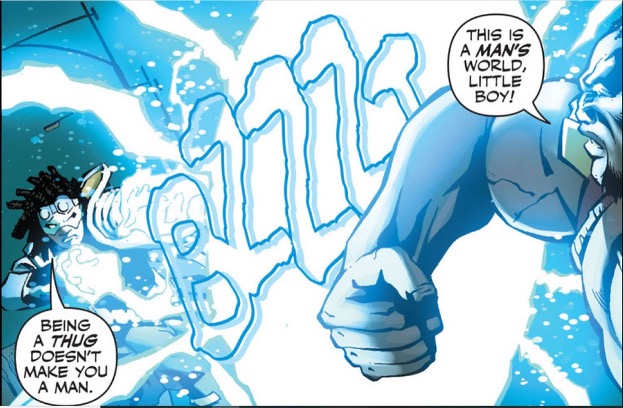 Static was created to be a teen hero every reader could relate to. He was geeky, intelligent, inexperienced with girls, and a wisecracker. He also dealt with real-world issues, such as racism and homophobia. When the character was given an animated series, producer Alan Burnett sought to carry over the core appeal of Virgil Hawkins, including episodes that dealt with real world issues. Here, Static/Virgil dealt with topics like racism, homelessness and mental issues, addiction and gun violence. Part of the realism of these episodes comes from acknowledging the proximity young people, especially young people of color, have to these issues. These themes may have been touched on in Batman or Superman comics, but rarely to the fullest extent. It’s difficult to balance morality tales with superhero narratives and get them right. Fortunately, Static’s relatability has made him a reliable go-to for superhero fans who want to see themselves and their world reflected in the supercharged city of Dakota.

Naomi: Learning Her Past, Present, and Future 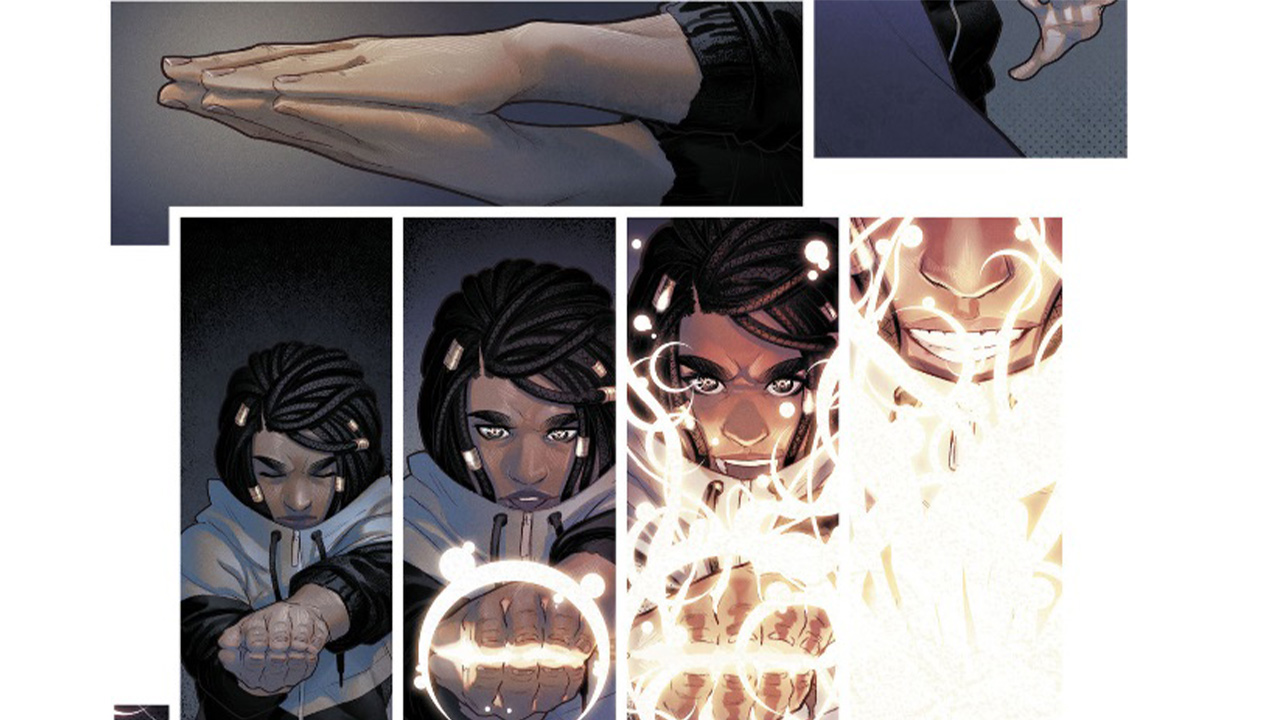 With the above-mentioned DC Heroes, there’s a shared theme of knowing who they are as people in spite of outside pressure from authority figures, the media, racist presumptions, or the trials of everyday life. Naomi’s story is different. As an adopted child, she doesn’t know who she is, and that unsettles her as a resident of a small Oregon town where nothing happens. Until the day Superman arrives, which leads her to search for her own background. As an orphan, Naomi feels a connection to Superman and hopes to learn that she too comes from someplace special. She has friends and loving adopted parents, but none of these settle the anxiety and frustration she feels deep down. Also, as one of the few black residents in a white-majority town, her feelings of displacement complement her sense of confusion and uneasiness. What if she’s from someplace bad? How would that further isolate her?

As it happens, Naomi discovers she's an alien from a parallel Earth, imbued with super powers like flight and strength. Overjoyed from learning her origins at last, Naomi heads to the one place where she believes she can learn to control her abilities from a kindred soul: Metropolis.

Because the superhero genre has and remains historically white, it’s important to note the attempts when diversity is given true effort. The consistency of certain characters’ portrayals is always in flux, making those moments of successful characterization resonate all the more strongly in the hearts of readers who share their likeness. Together, those moments form a kind of template with which to keep the superhero world meaningfully diverse and reflective of a world we yearn to see in all forms of media.

What are your favorite moments of diversity in the DCU? Talk about it in our Community!