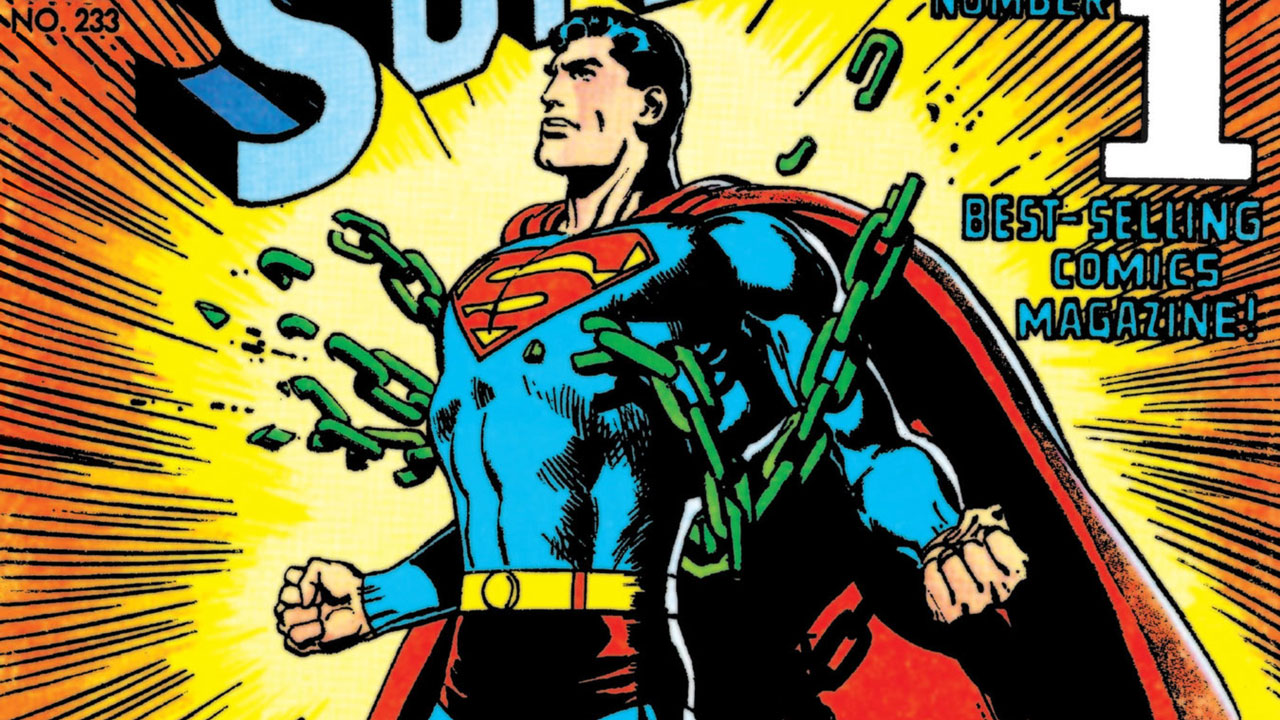 In June of this year, the world lost a titan of the Comic Book Industry. Dennis O’Neil was a writer, editor, and journalist whose decades-spanning career resulted in some of the most popular character concepts and creations that the superhero genre has ever seen. O’Neil worked for both of comics' "Big Two" publishers and affected the world’s most famous titles, but it's with his definitive takes on Batman, Green Arrow, and others that his creativity is best remembered. With his DC writing, O’Neil took familiar concepts, discarded them, and gave new life to popular characters. Let’s look at five DC characters that O’Neil reinvented. 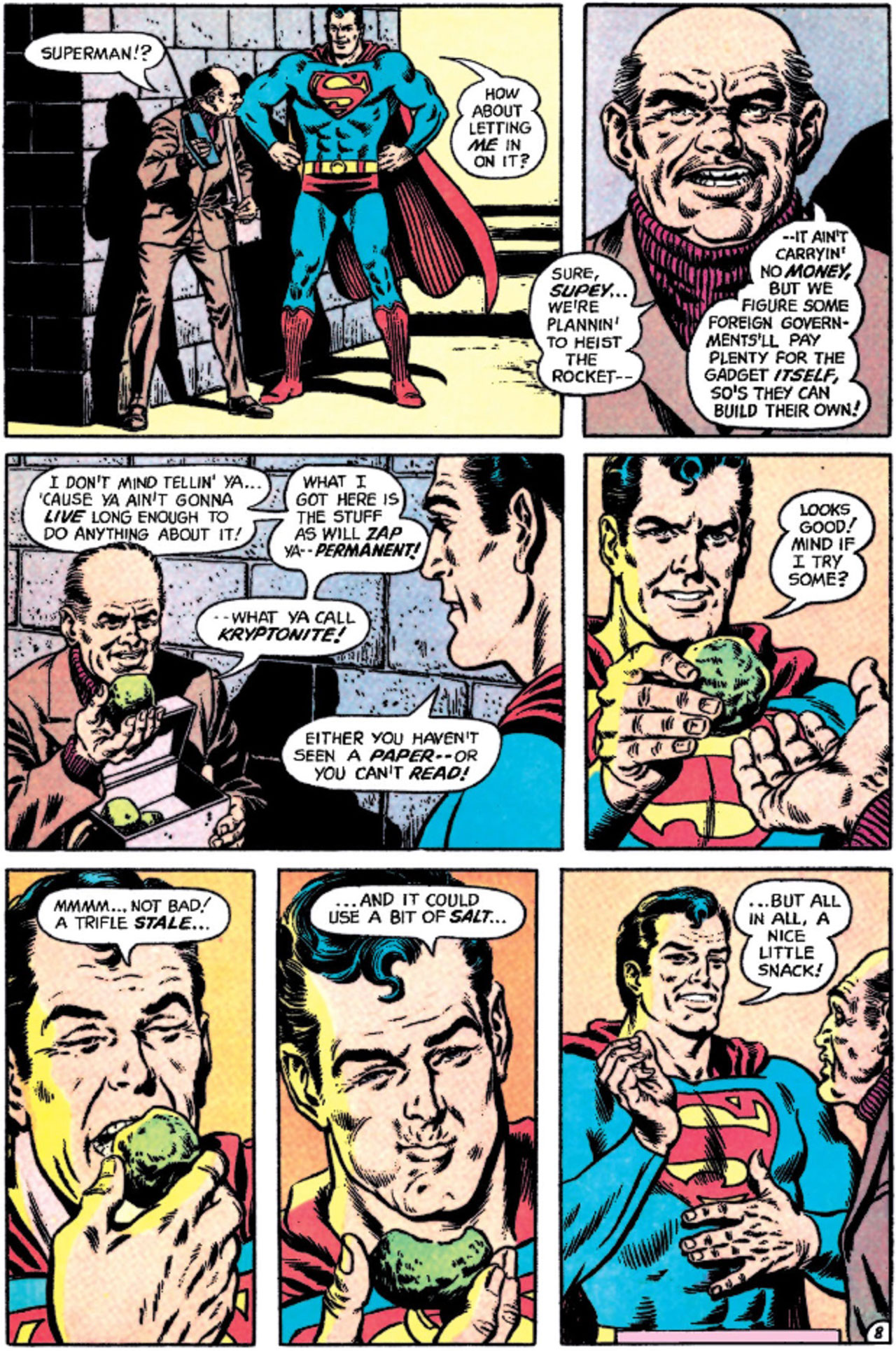 The 1970s were a decade of major change at DC, and the Superman titles were no exception. After enjoying thirty years of sci-fi adventures and the limits to his power a long-gone thing of the past, O’Neil, along with editor Julius Schwartz, sought to put a cap on Superman’s abilities and change the status quo. In Superman #233, an experiment involving kryptonite goes predictably haywire, and the result mutates the alien mineral into harmless iron. Although the incident also depowers him, the Man of Steel is overjoyed at the loss of his most well-known weakness. But that was only the beginning. Morgan Edge, the new owner of the Daily Planet, reassigned Clark to his WGBS television network, changing his occupation from investigative journalist to TV news achorman. Clark wound up responding to crises incognito before reporting on them.

The storyline, later collected as both “Kryptonite Nevermore” and "The Sandman Saga," had a mixed reception with fans, and both kryptonite and Superman’s power levels were restored before long. However, Clark’s job as a TV anchor was kept intact well into the '80s, until the continuity-altering Crisis on Infinite Earths. 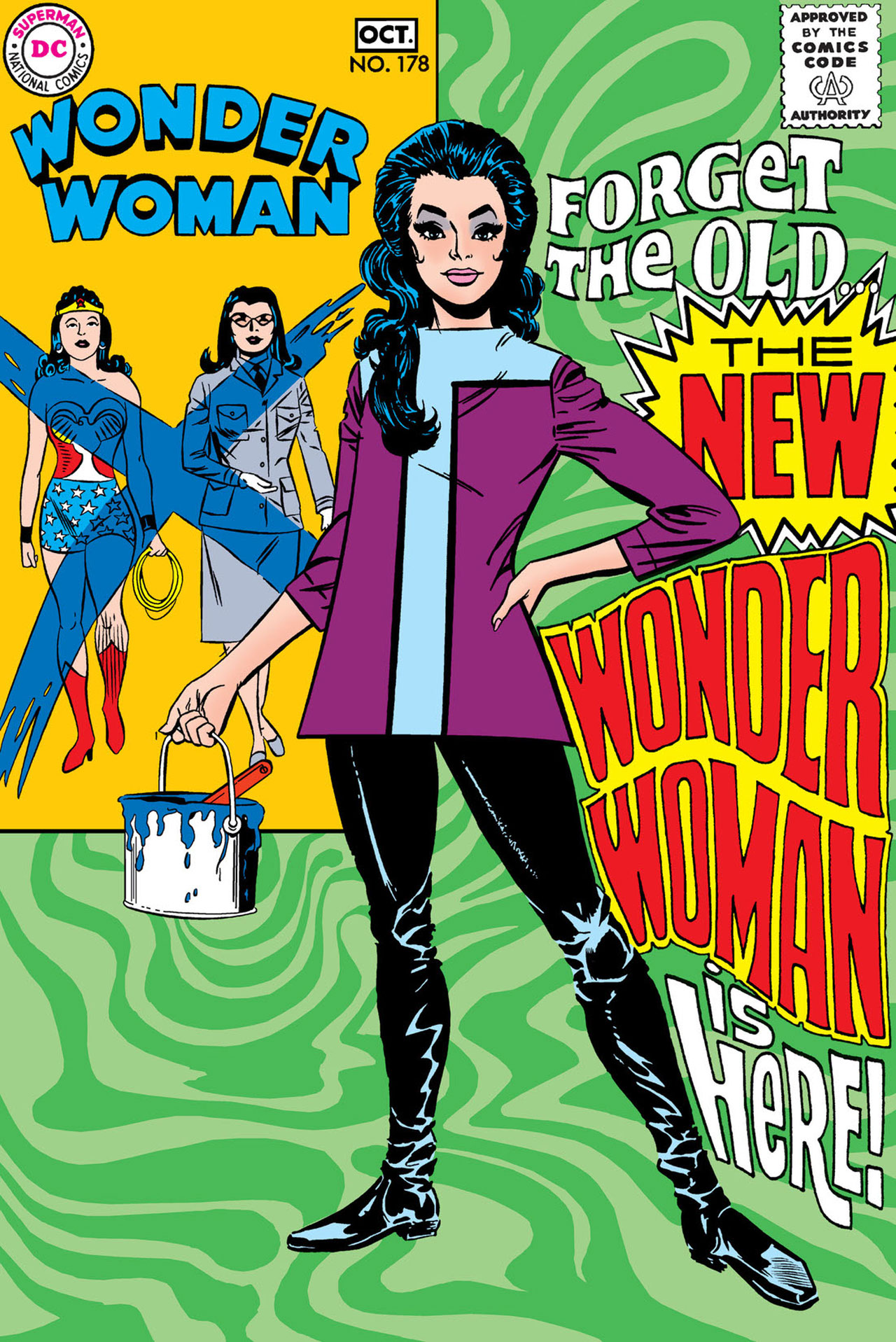 O’Neil’s contribution to the Wonder Woman mythos proved even more controversial. Working with artist Mike Sekowsky, O'Neil saw the princess of the Amazons altered from super-powered warrior to a depowered martial artist. In Wonder Woman #178, Steve Trevor is framed and arrested for murder. A guilt-ridden Diana goes undercover at a hippie commune, receiving a complete image makeover as part of her investigation. Later, she’s called by her Queen mother to return to Paradise Island and join the Amazons in journeying into another dimension. Diana refuses, and is forced to relinquish her Amazonian abilities. Without her powers and costume, she meets a blind man named I-Ching who trains her in the martial arts in exchange for her assistance in taking down Doctor Cyber, a mysterious new villain. Diana soon opens up a mod fashion boutique, employs a young runaway girl, and begins going on international missions with I-Ching, mirroring the spy craze of the late 1960s.

To date, O’Neil and Sekowsky’s Wonder Woman remains polarizing. Some readers took to the more independent and grounded Diana. Others, including – famously – feminist icon Gloria Steinem, took DC to task for depowering their most prolific female hero. O’Neil later conceded this was an oversight on his part, maintaining that his intentions were always to come up with a fresh, interesting way to challenge how Diana had been depicted in the years since her creator William Marston’s death. 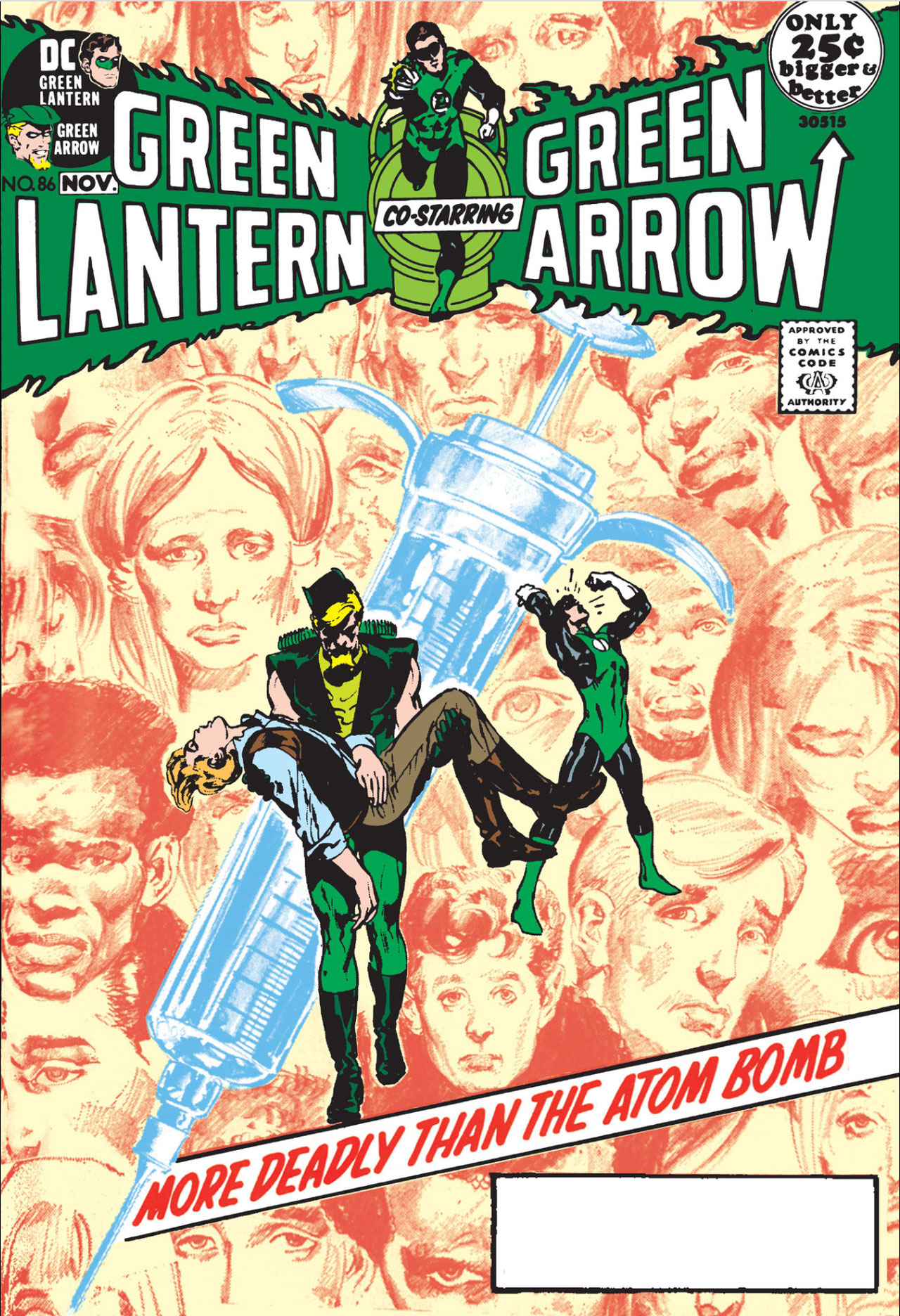 As O’Neil’s career progressed, he became invested in how the country was changing. Racism, environmentalism, overpopulation, and economic woes were at the forefront of the news in the early 1970s. Beginning a new run on the flagging Green Lantern book by pairing Hal Jordan with Green Arrow, O’Neil – along with artist Neal Adams (who'd recently redesigned the blonde bowman with a goatee) – used the title to address the problems of the country. As a result, the character of Oliver Queen – once a thinly veiled Batman pastiche who bobbed around superhero teams – became a deeply conflicted crusader for the little guy.

Losing his fortune, Oliver relocates to a low-income slum, battling drug pushers, greedy landlords and sleazy businessmen. Arrow not only fought their influence over the masses, but he often fought against his own friend Hal Jordan. Rejecting Hal’s allegiance to authority, Oliver convinced him to travel cross-country, learning how people from different walks of life live. While the book didn’t sell well, this version of Green Arrow quickly became iconic. It was continued in writer Gerry Conway’s Justice League of America, where Oliver quit the League for overlooking the smaller problems of society. Since then, Green Arrow has developed into a flawed, complicated hero who always wears his heart on his sleeve and his sense of justice on the tip of his tongue. 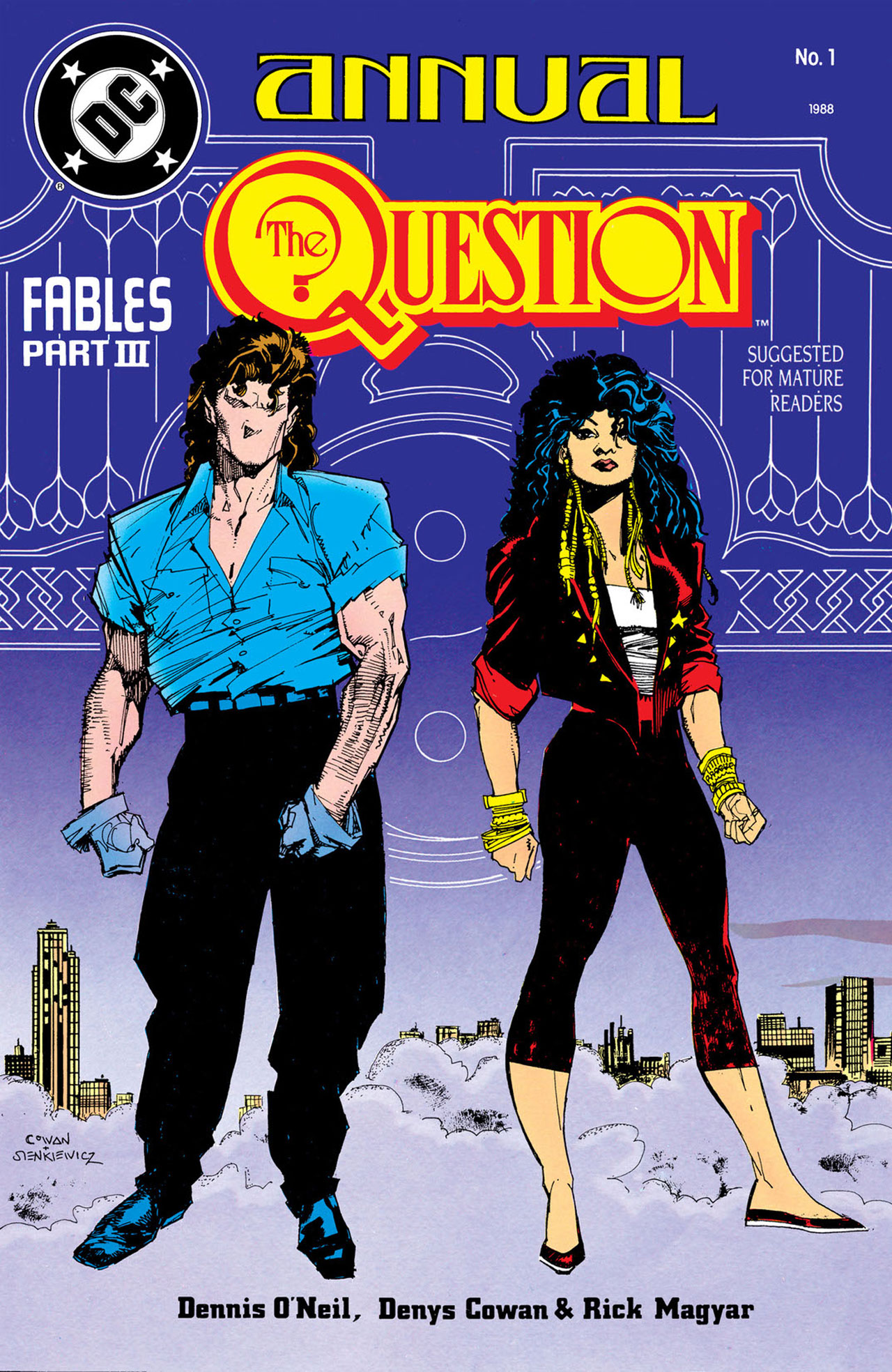 In 1986, DC acquired several characters of the Charlton Comics Universe, one of them being the Question. Created by objectivist writer-artist Steve Ditko, the character was a two-fisted crimefighter whose sense of right and wrong was buoyed by his job as a news anchor reporting on the crimes he’d combat at night. With the first issue of The Question (1987), O’Neil and artist Denys Cowan have the character pulverized, shot in the head, and left to drown. Saved by Lady Shiva, a creation of O’Neil’s from his '70s series Richard Dragon Kung-Fu Fighter, the Question undergoes a spiritual death and rebirth. Receiving training from Dragon, the man also known as Vic Sage emerges with a sharper focus on justice, seeking out corrupted officials in Hub City.

The Question is arguably O’Neil’s most personal work. While Batman is certainly his most popular and Green Arrow his most emotional, each storyline of The Question tackled topics like eastern philosophy. An infrequent element in the series was the reintroduction of Lady Shiva, who was reimagined by her creator as an indomitable force of nature who neither condones nor condemns the actions of good or evil, seeking her own interests that are rarely made clear beyond a simple martial arts challenge. It was through this series that Shiva became a staple of the Bat books in the following decade, which O’Neil edited. 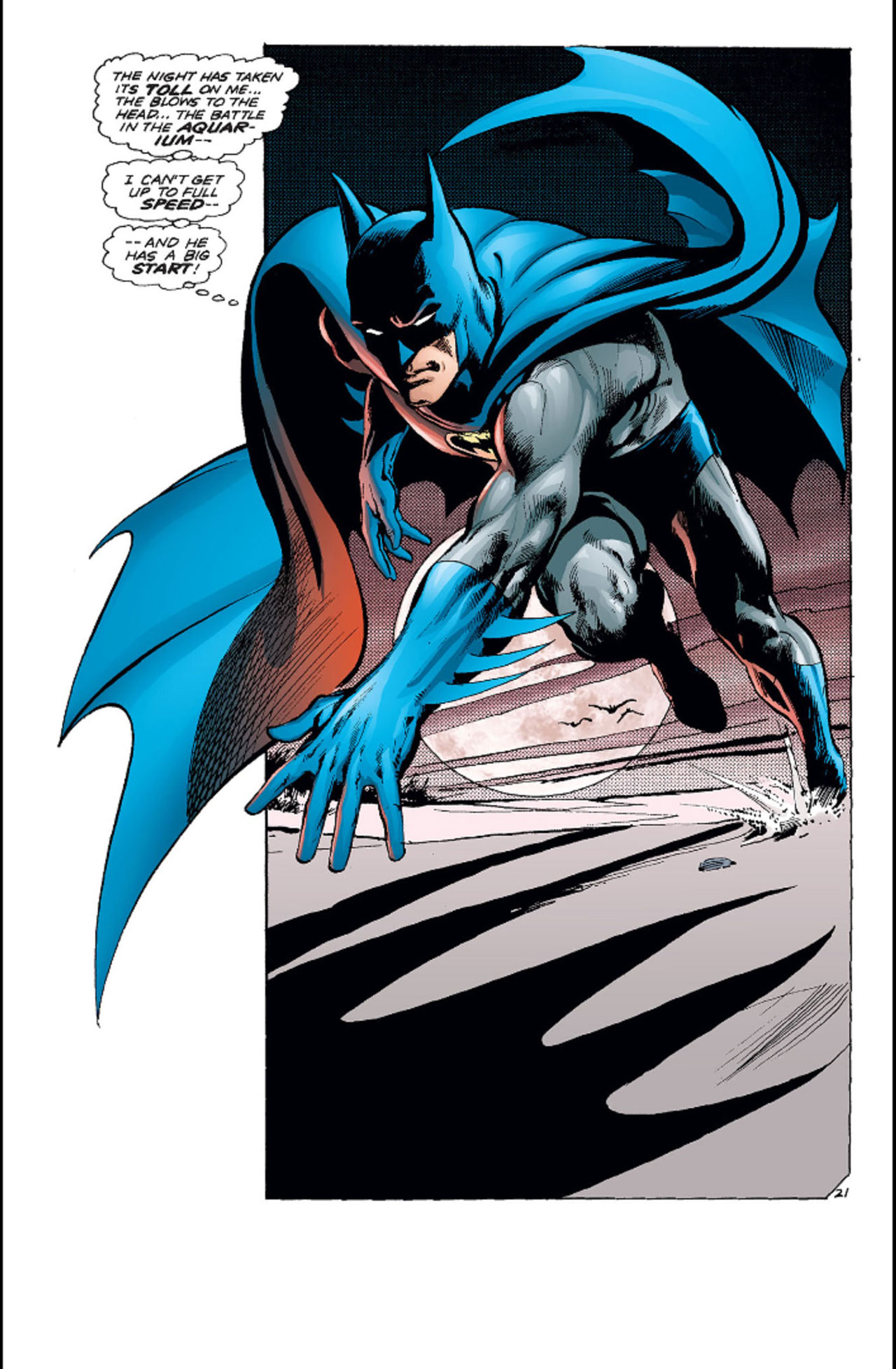 Of course Batman is O'Neil's most famous work. After the cancellation of the Adam West-starring TV series, the Bat books were in danger of ending. Yearning for a return to the grim avenger of the Golden Age, O’Neil began altering Gotham City with each story. From the reintroduction of the Joker as a mad serial killer to sending Robin to college, away from his mentor, O’Neil’s focus was on restoring Batman as a solitary figure of legend. He also brought his detective skills to the forefront of every story. Batman #251 “The Joker’s Five-Way Revenge!” had the Caped Crusader employ Holmesian levels of deduction as he pursued the Joker. Batman #232 showed Batman outwit a mythological figure in the form of "The Demon’s Head" – Ra’s al Ghul.

O’Neil would write Batman over the course of the 1970s, returning to edit the Bat books in the late '80s. Throughout his tenure he shepherded titles such as Birds of Prey, Nightwing, Robin, Catwoman, Legends of the Dark Knight, and some of the most iconic Batman storylines, like Death of the Family, Knightfall, and Contagion. O’Neil retired in 2000 after wrapping up the mega-storyline No Man’s Land, making the Bat family titles a cohesive, interconnected unit which influenced readers and writers for a generation. His influence is felt through various media, from Batman: The Animated Series to films such as Batman Begins and The Dark Knight.

Who’s your favorite Denny O’Neil hero? Let us know in our Community!