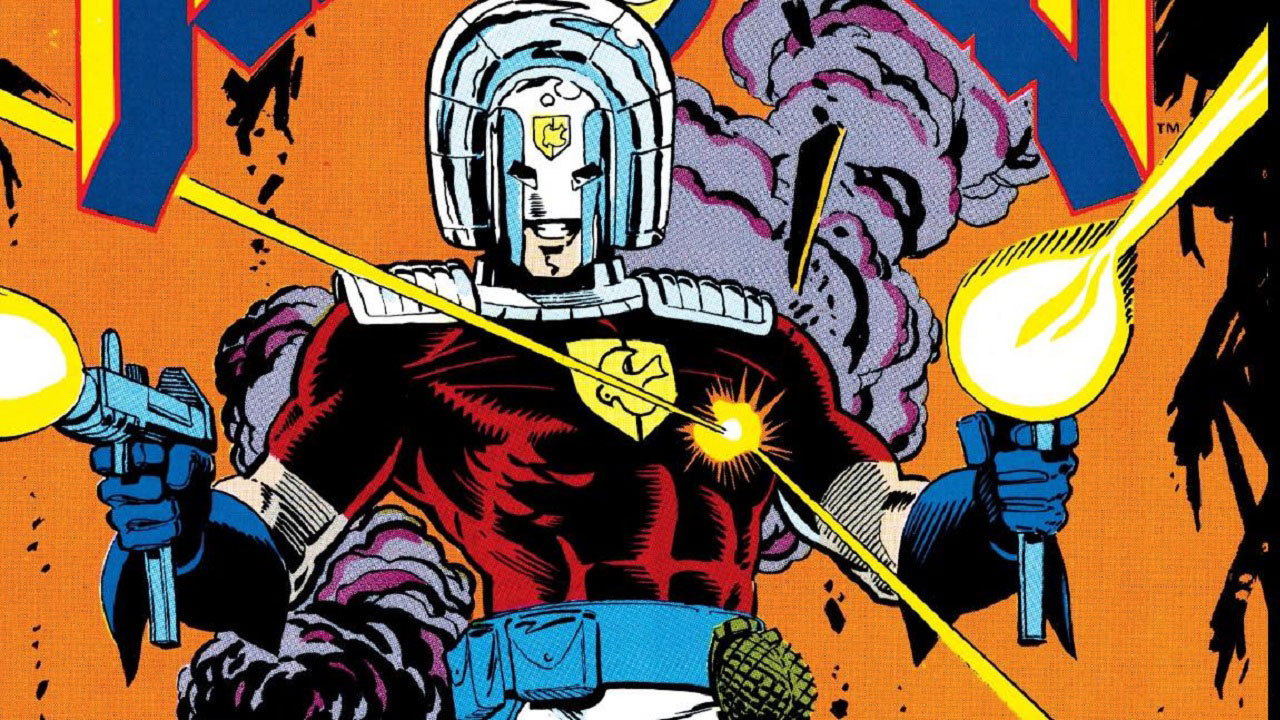 War, what is it good for? Absolutely nothing, which is why Christopher Smith fights to maintain harmony as Peacemaker. In a world full of endless wars, Peacemaker is here to make sure everyone lays down their arms – even if he has to kill everyone to make that happen! We recently learned that wrestling legend John Cena will play Peacemaker in director James Gunn’s upcoming film The Suicide Squad. If that isn’t enough to get you excited, HBO Max has announced it's ordered a live-action Peacemaker TV series, where Cena will reprise his role. To help prepare us for the live-action debut of the infamous Christopher Smith, here are 5 conflict resolution tips from Peacemaker.

MAKE SURE EVERYONE IN THE ROOM IS WILLING TO NEGOTIATE 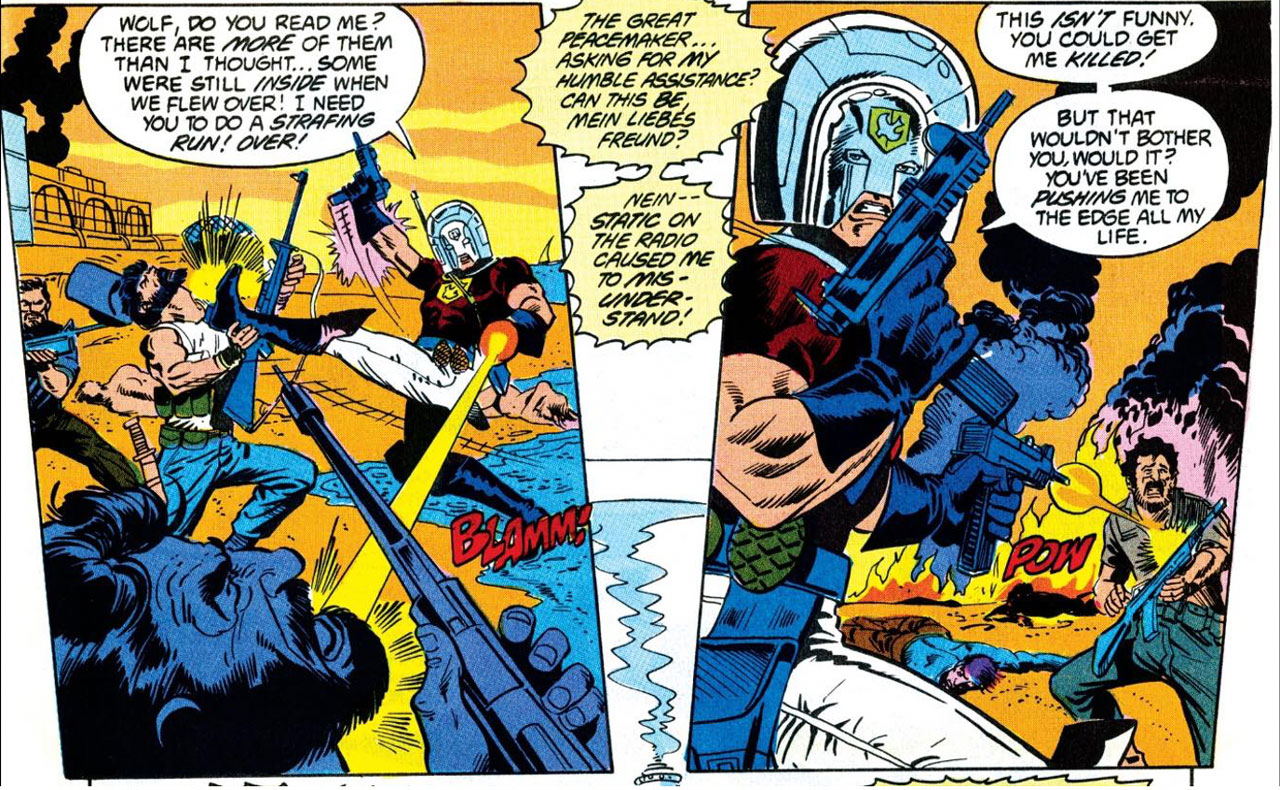 Christopher Smith knows peace is within our grasp. We just have to be willing to negotiate. How do you get all sides to the table? According to Peacemaker, you do it by killing everyone trying to escalate the violence. That way the only people left are the pacifists who work for peace. As Smith slaughtered a group of terrorists in Peacemaker #1, he believed each bloodied corpse put the world one step closer to peace. It’s an extreme measure for sure, but nobody can ever accuse the Peacemaker of being subtle.

SHOW THE ENEMY HOW DESTRUCTIVE WAR IS 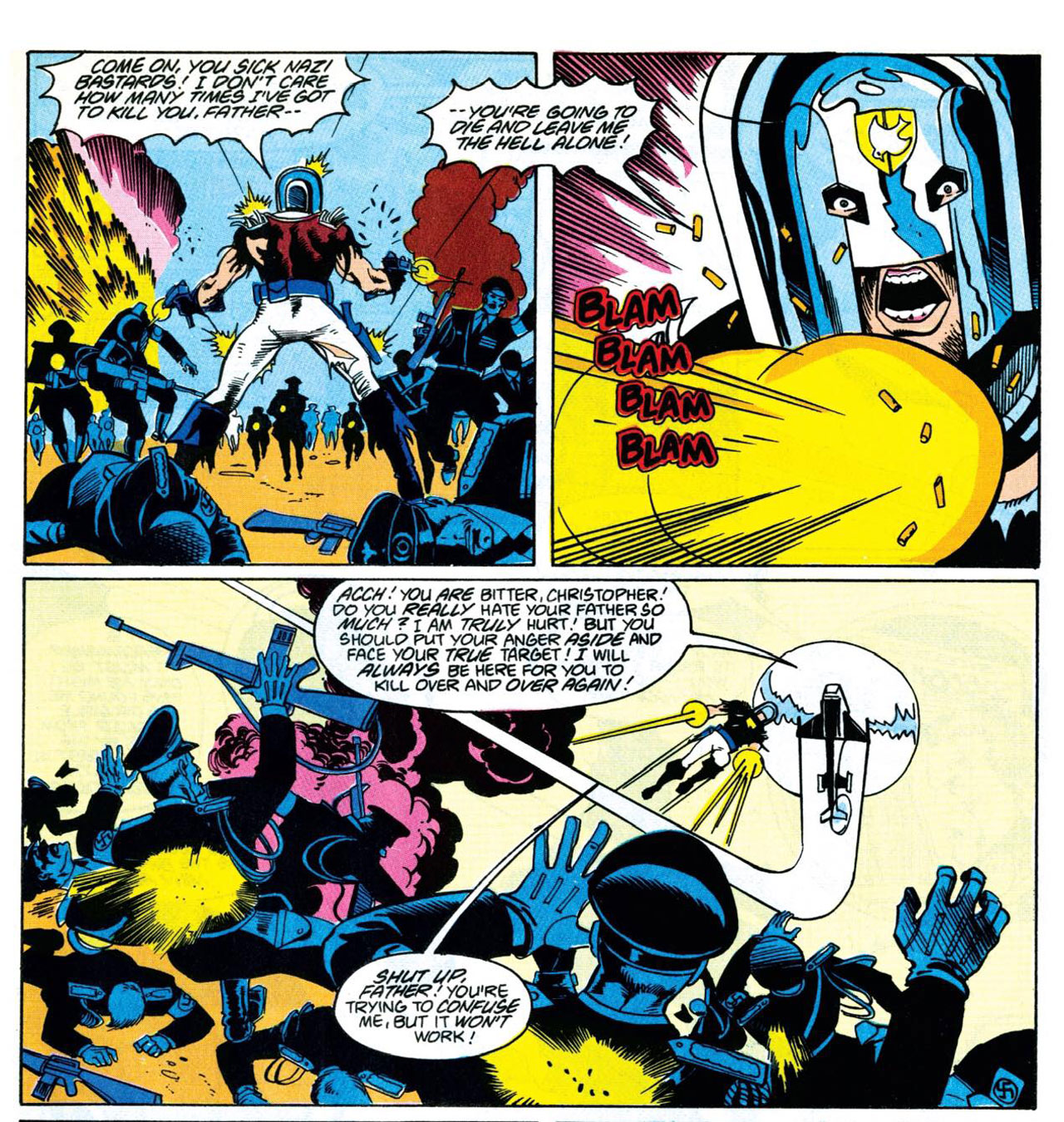 If you want peace, you have to be prepared to show the other side how bad war is. Christopher gave a good demonstration of this in Peacemaker #4, when he took out an enemy camp with an aerial assault. The carnage that Peacemaker caused was traumatizing enough to put even the most bloodthirsty general off of fighting. We can argue about how harmful violence is, but until it’s experienced firsthand, villains can't comprehend the full horror of their actions.

DON’T BE AFRAID TO MAKE A MESS 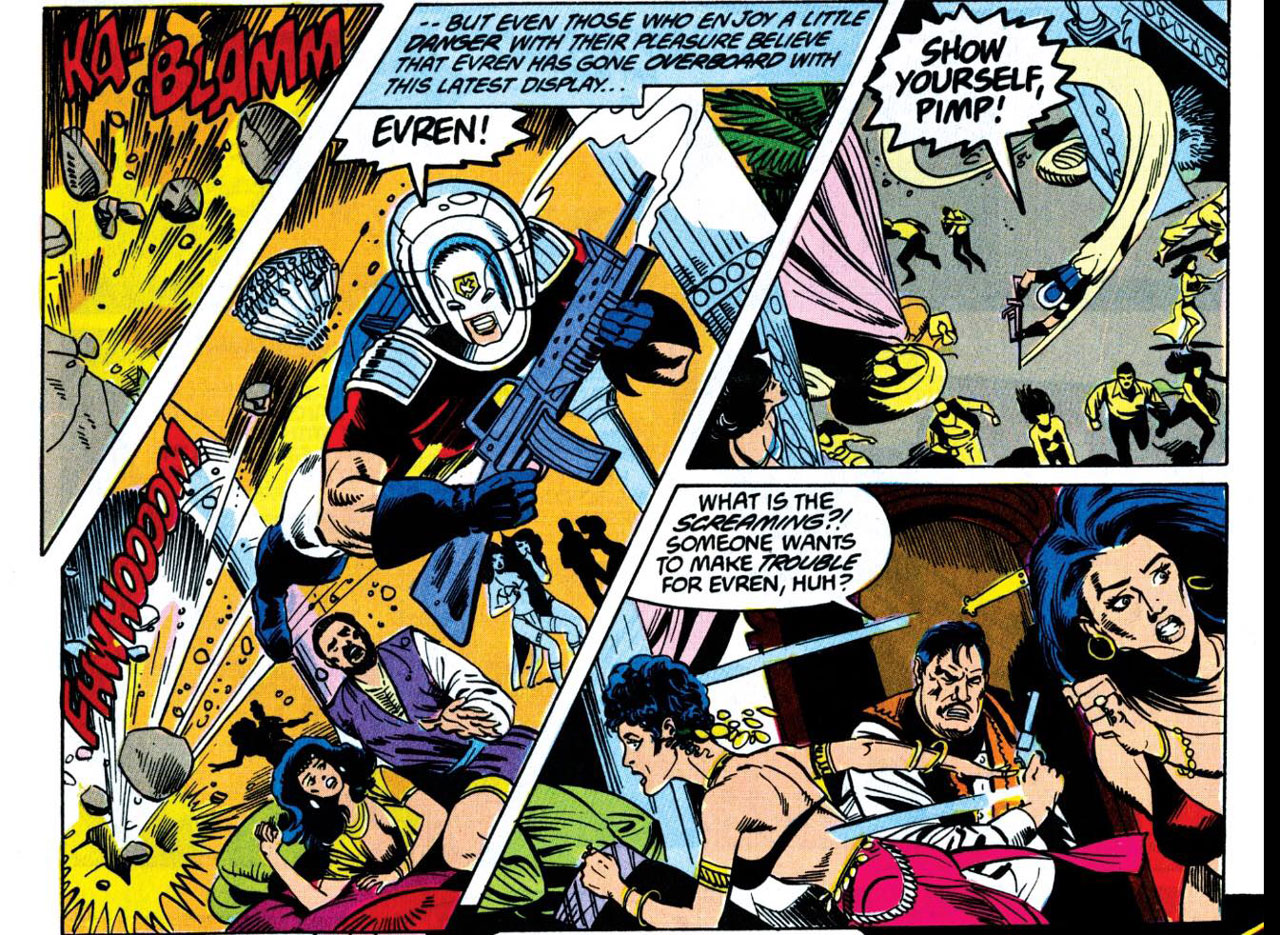 The path to peace can be a bit uncomfortable, and that’s okay. Peaceful negotiations can get uncomfortable, but sometimes you have to make a mess to achieve peace. For example, in Peacemaker #2, Smith smashed through a wall shouting, “Show yourself, pimp,” before blasting his target. Was it a messy way to make an entrance – absolutely! But Peacemaker knows that sometimes a broken wall, an angry shout, and a barrage of bullets is the only way to start a peaceful discussion.

HAVE A BIGGER WEAPON THAN THE OTHER GUY 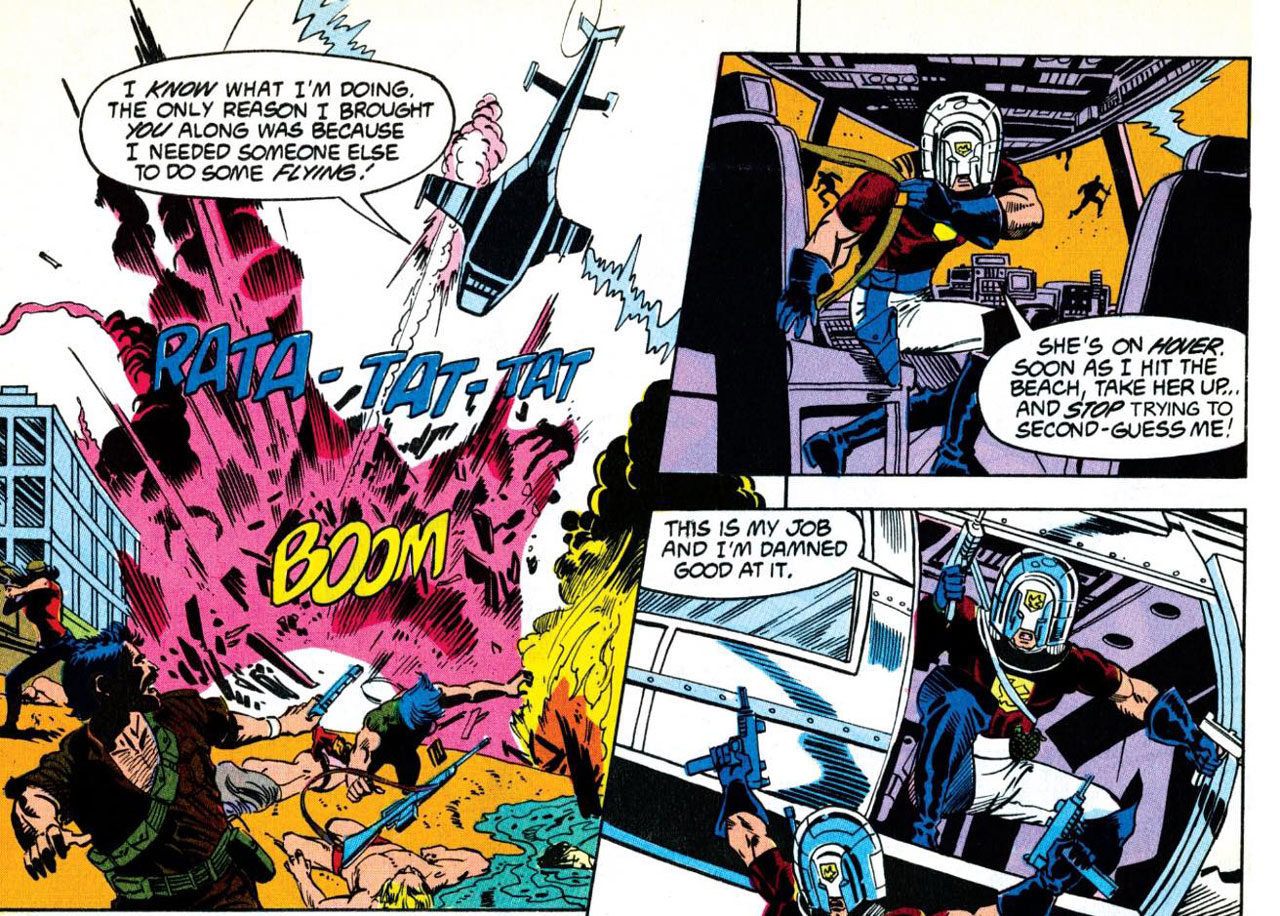 One great way to resolve a conflict is by making sure your weapons are bigger than everyone else’s. And according to Christopher Smith, you need big guns to defend the peace. That’s why Peacemaker flies his own fighter jet, complete with a state-of-the-art missile system, machine guns, and heavy armor. Think of it as the Peace-Plane, if “peace” means flying through the air blasting everything in your path.

IGNORE ANY NAZI GHOSTS SCREAMING IN YOUR BRAIN

We admit that not all experiences are universal, but sometimes the best way to maintain peace is to ignore the ghost of your late Nazi father screaming in your head. As detailed in Peacemaker #1, Smith’s father was a Nazi warlord who operated one of the biggest death camps in Europe. Wolfgang Schmidt took his own life when his Nazi past resurfaced, traumatizing his young son. Ever since then, Christopher has heard his father’s voice in his head, criticizing him during his missions. Thankfully Smith knows better than to follow the advice of a murderous Nazi, and he doesn’t let it get in the way of his quest for world peace. While that’s admirable, we’d still be a bit more comfortable if he saw a therapist.

Disclaimer: Don’t try any of these peacekeeping methods, you'll get yourself and others hurt. It turns out that Peacemaker is a psychopath, whose pacifist methods leave a lot to be desired... We wish James Gunn’s The Suicide Squad luck, because with this guy on their team, they’re going to need it! To see more of Christopher Smith’s questionable conflict resolution methods, check out the 1987 Peacemaker limited series.

What are your best conflict resolution tips? Let us know in our Community!