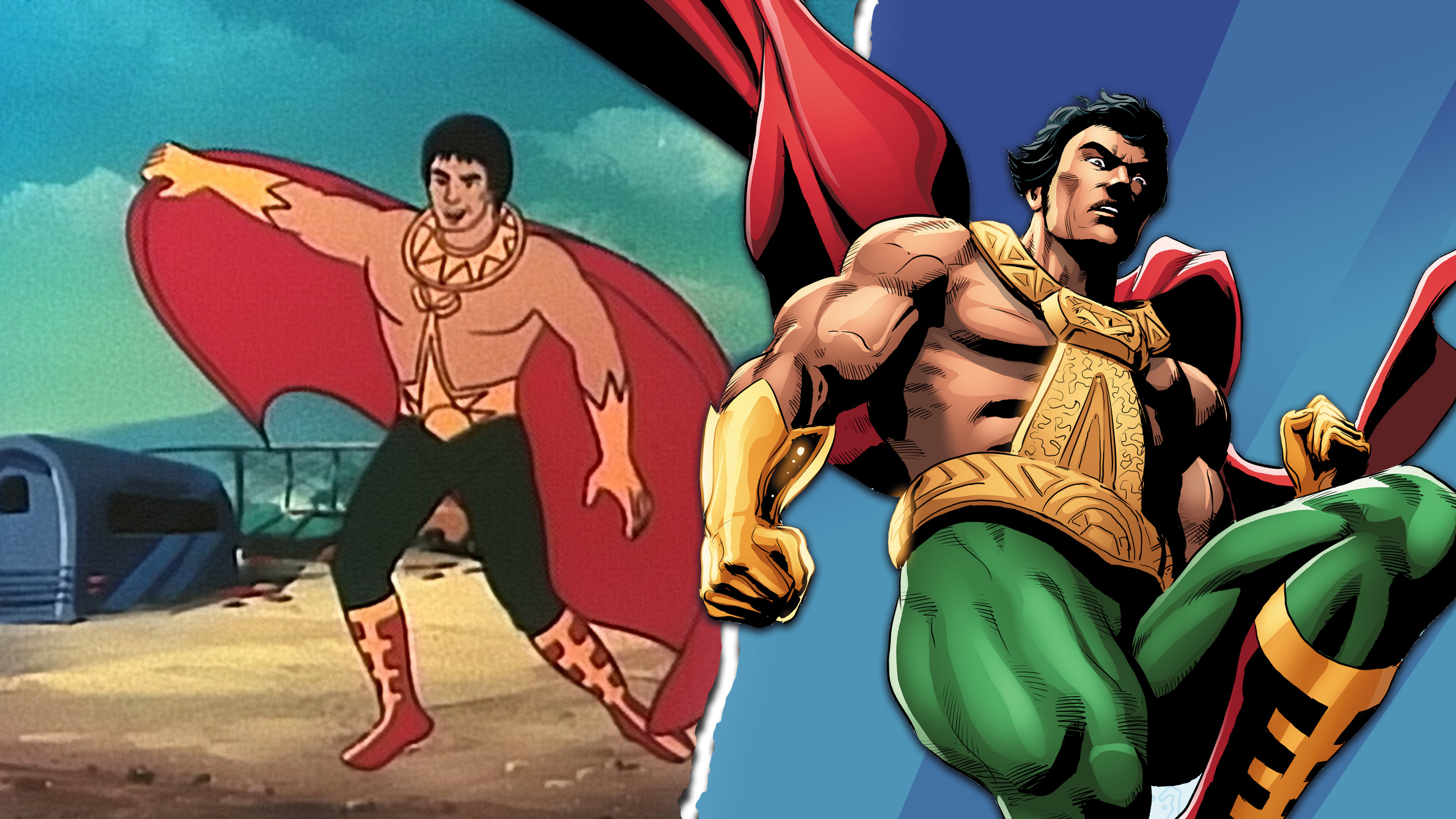 ‘Super Friends’ was the first animated iteration of the Justice League. They gave screen time to many undersung characters and introduced several new ones to the ranks. Their styles were mired in the 70s and the characters often had one note personalities. However, times have changed and so have many of these heroes. Open your eyes as we reveal these Fab 5 Super Friends glow-ups! 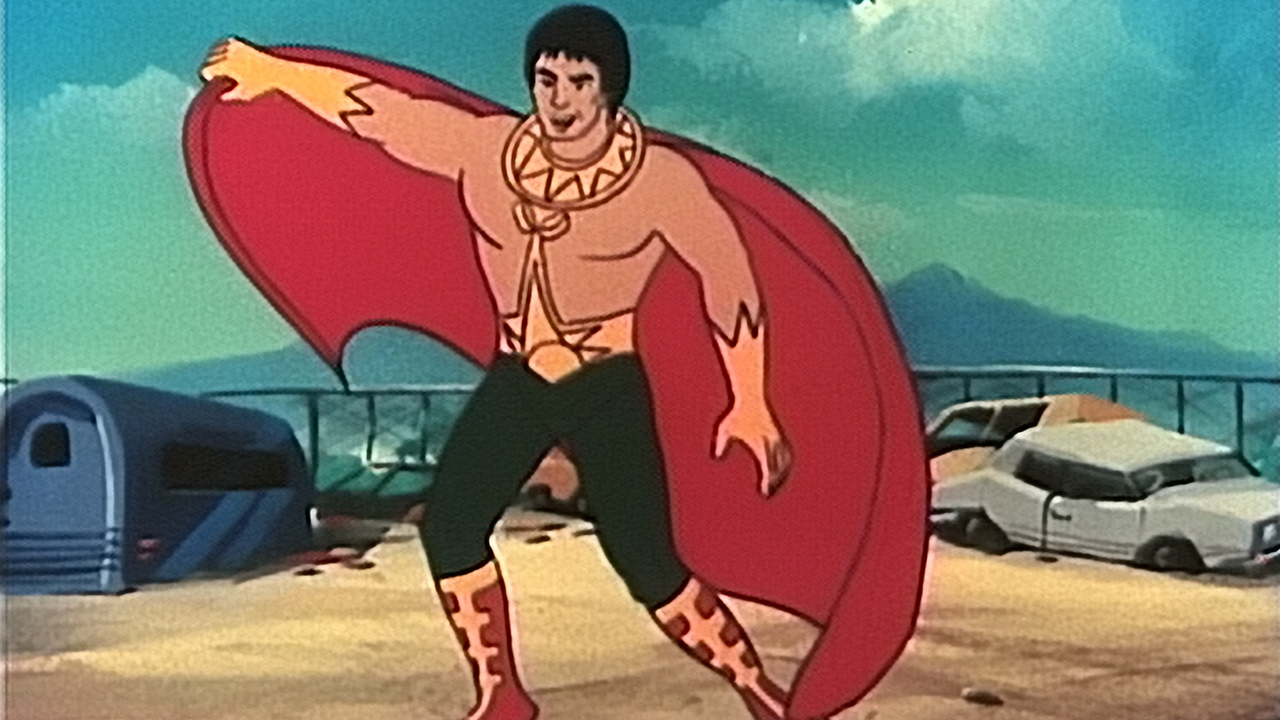 Created for the show, El Dorado makes his debut in the episode “Alien Mummy” with the powers of super strength, teleportation, telepathy, and the ability to conjure illusions. It’s possible that he has the power of flight (that’s levitation, Holmes), but in the cartoon he was only ever seen just landing or hovering for a bit. He was a minor character in the series and didn’t have much screen time or lines compared to some of the other Super Friends. 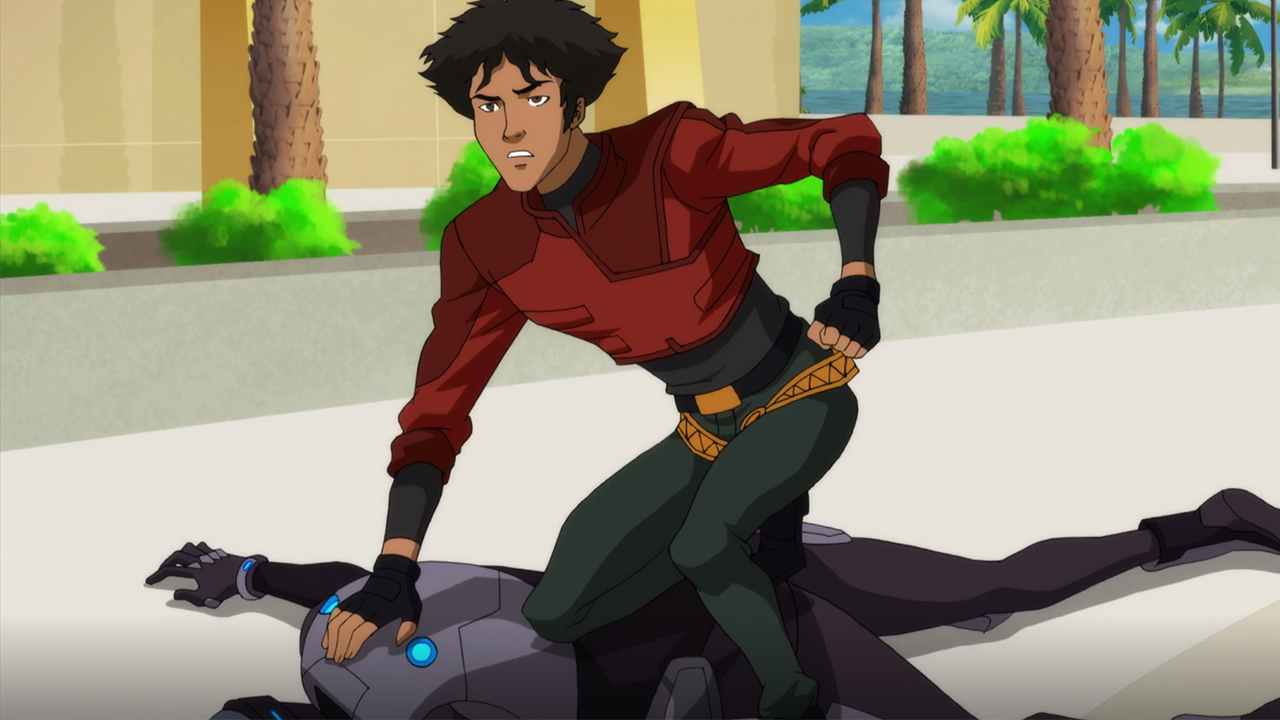 ALL GLOWN UP: A version of the character appeared as one of the teens kidnapped by the Reach in the “Runaways” episode of ‘Young Justice: Invasion.’ Eduardo “Ed” Dorado Jr. only has teleportation powers in this modernized version. Although he’s covered up his pecs with a v-neck, he’s still in tremendous shape, and take a look at that new Spike Spiegel hairstyle! In By Season 3, he officially becomes part of the Outsiders team, complete with a fresh new lewk. 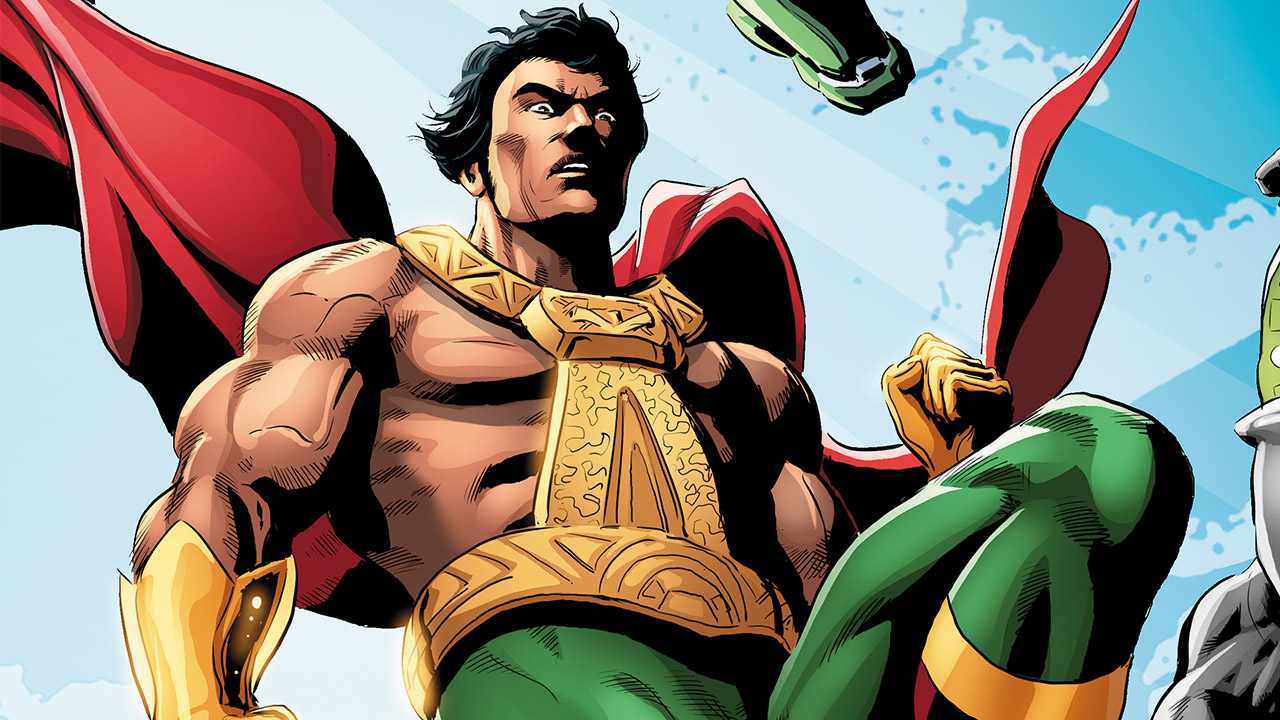 BONUS GLOW: His comic appearances are few and far between, but in 2016, he is shown as part of the Mexican super-team, Justica in ‘Suicide Squad Most Wanted: El Diablo and Amanda Waller #5.’ He retains his shirtless look and we finally get a confirmation on his flight abilities. 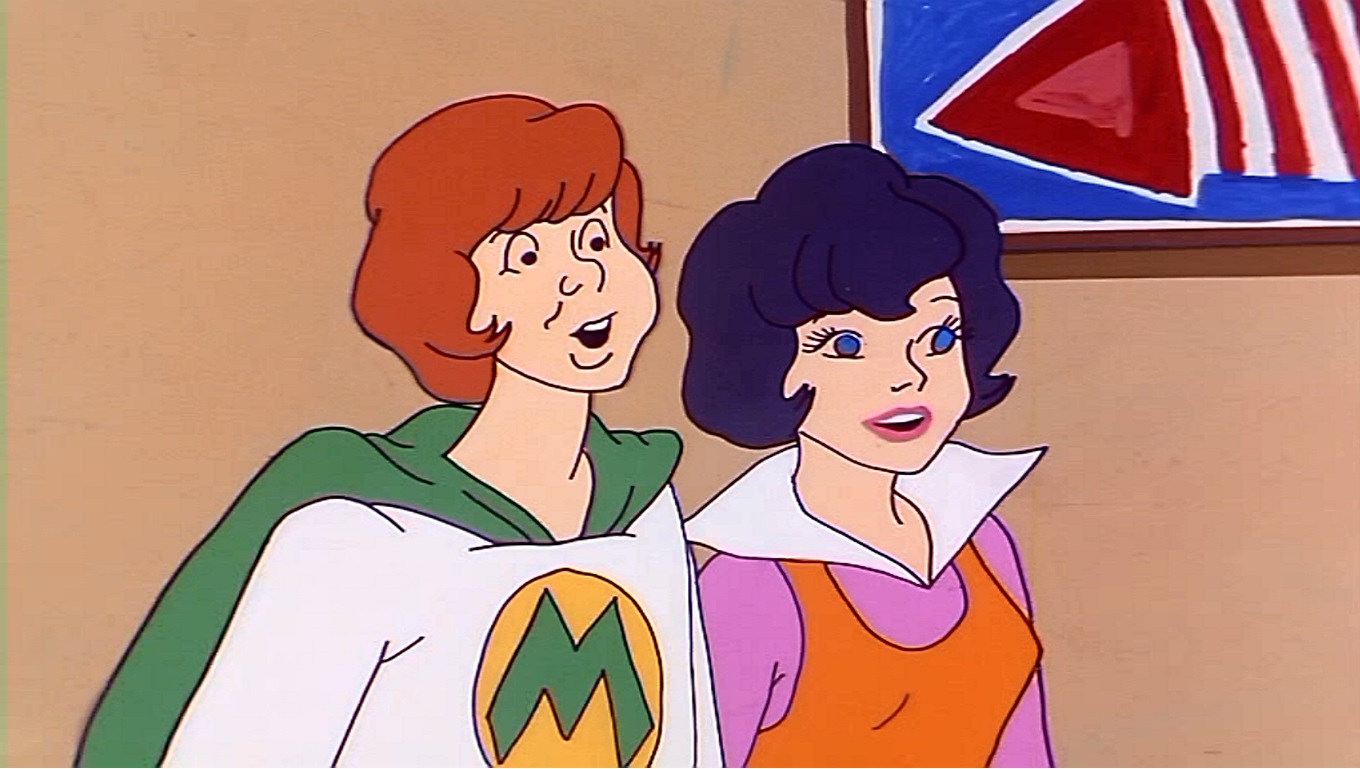 SUPER FRIENDS: Originally conceived as recognizable comedic fodder, Wendy and Marvin were friends of the Super Friends. Although it’s never explicitly stated why these powerless teenagers hang out with the team, they get to be in the Super Friends intro along with their trusty Wonder Dog. Wendy is the niece of the detective who trained Batman, but Marvin’s role was to be a bumbling character who often learned a vital lesson in the episode. 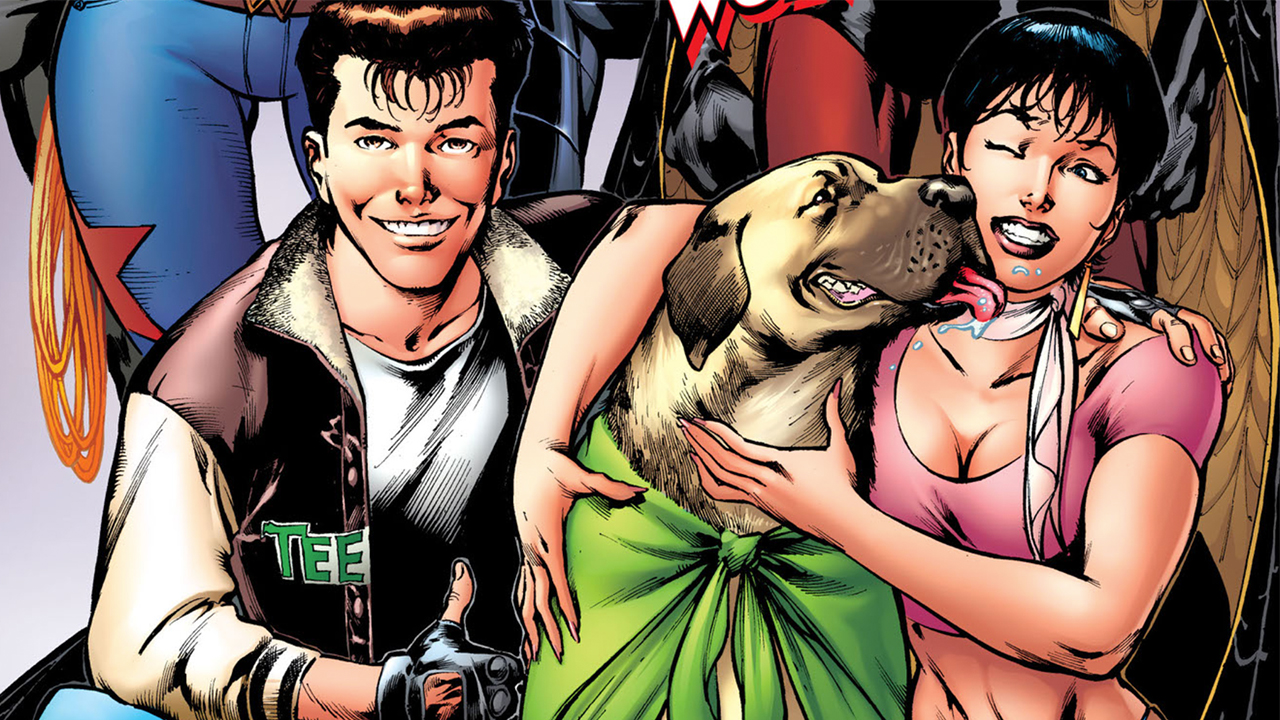 ALL GLOWN UP: Wendy and Marvin get a massive make-over in future installments. They are no longer just friends, they’re now twins and specifically the children of the villainous Calculator. In 2009, Wendy gets more of a connection to Batman in ‘Oracle: The Cure #3’ when she becomes Barbara’s partner, codenamed Proxy. And uh, Marvin gets mauled and partially eaten by a demonic version of Wonder Dog. Not every glow up can be good, people! 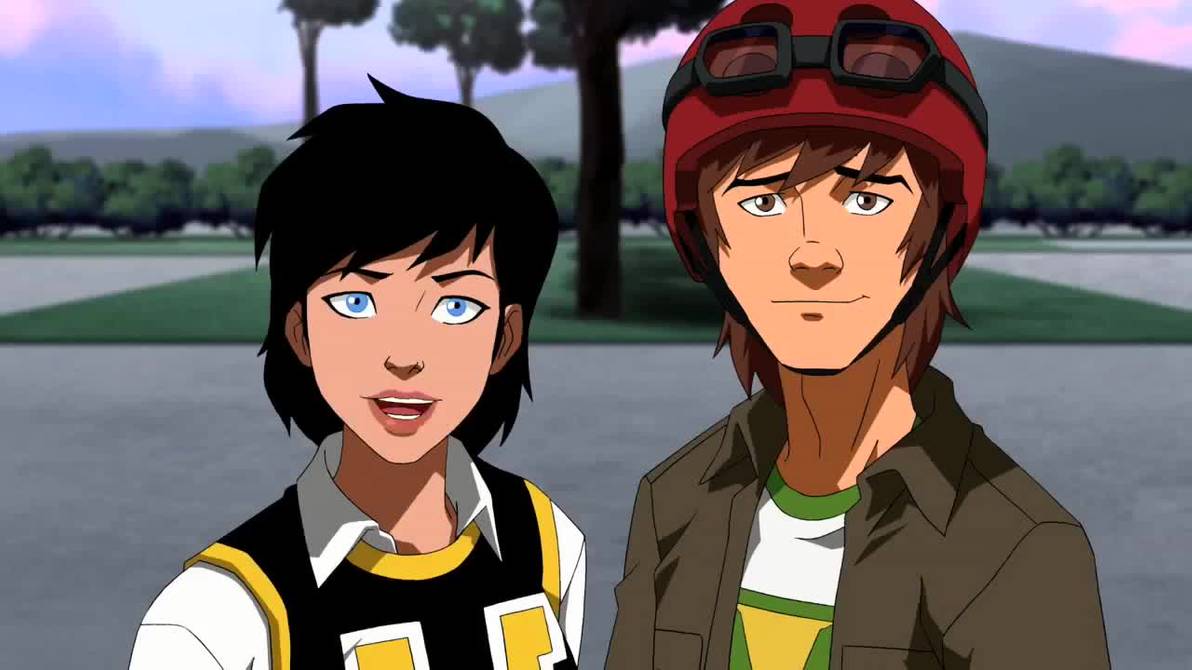 BONUS GLOW: These two also appear in ‘Young Justice’ as a high school couple (rest assured, they are no longer twins) who become fast friends with the young sidekicks. In the episode “Secrets” they attend a Halloween dance as Black Canary and Batman. Marvin, ever the prankster, plans a War of the Worlds style hoax. Seems like he never did learn his lesson, but thankfully he remains unmauled. 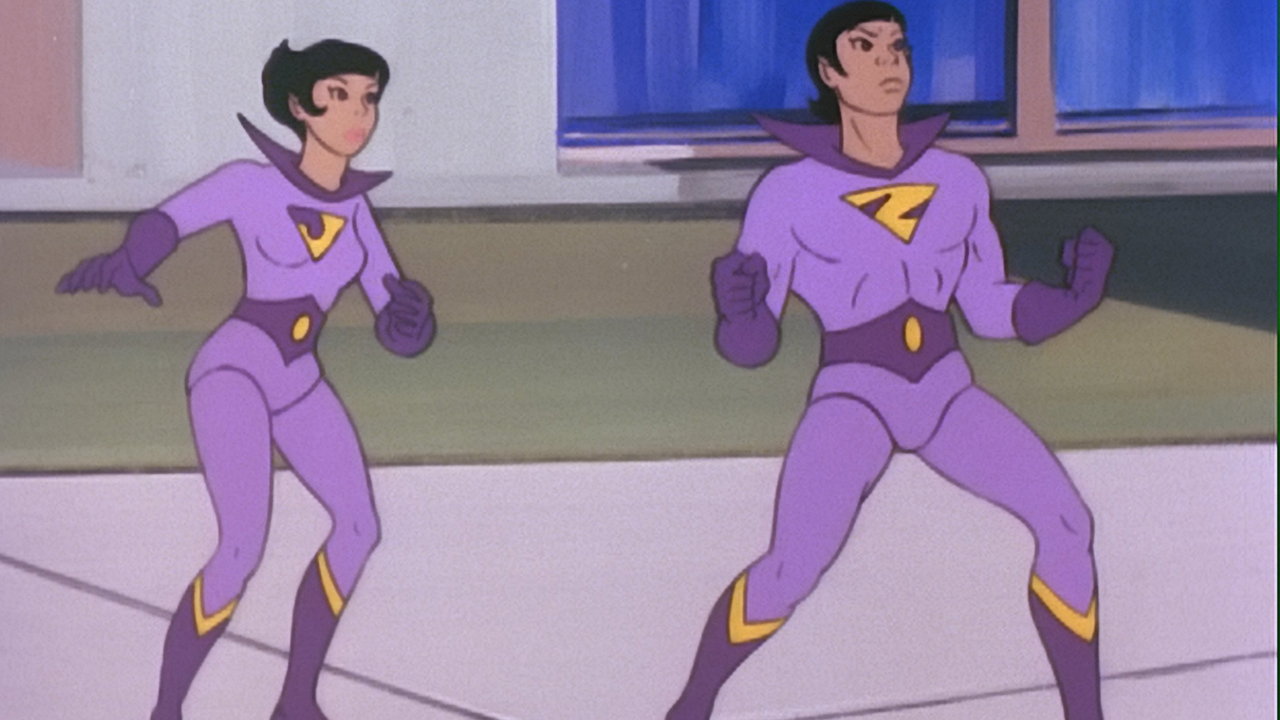 SUPER FRIENDS: No relation to Wonder Woman, Zan and Janya are from the planet Exxor with the power of water and animal transformation respectively. Originally, these two were heroes in training with the Super Friends. After a few seasons, their presence in the show evaporated faster than Zan on a hot day! 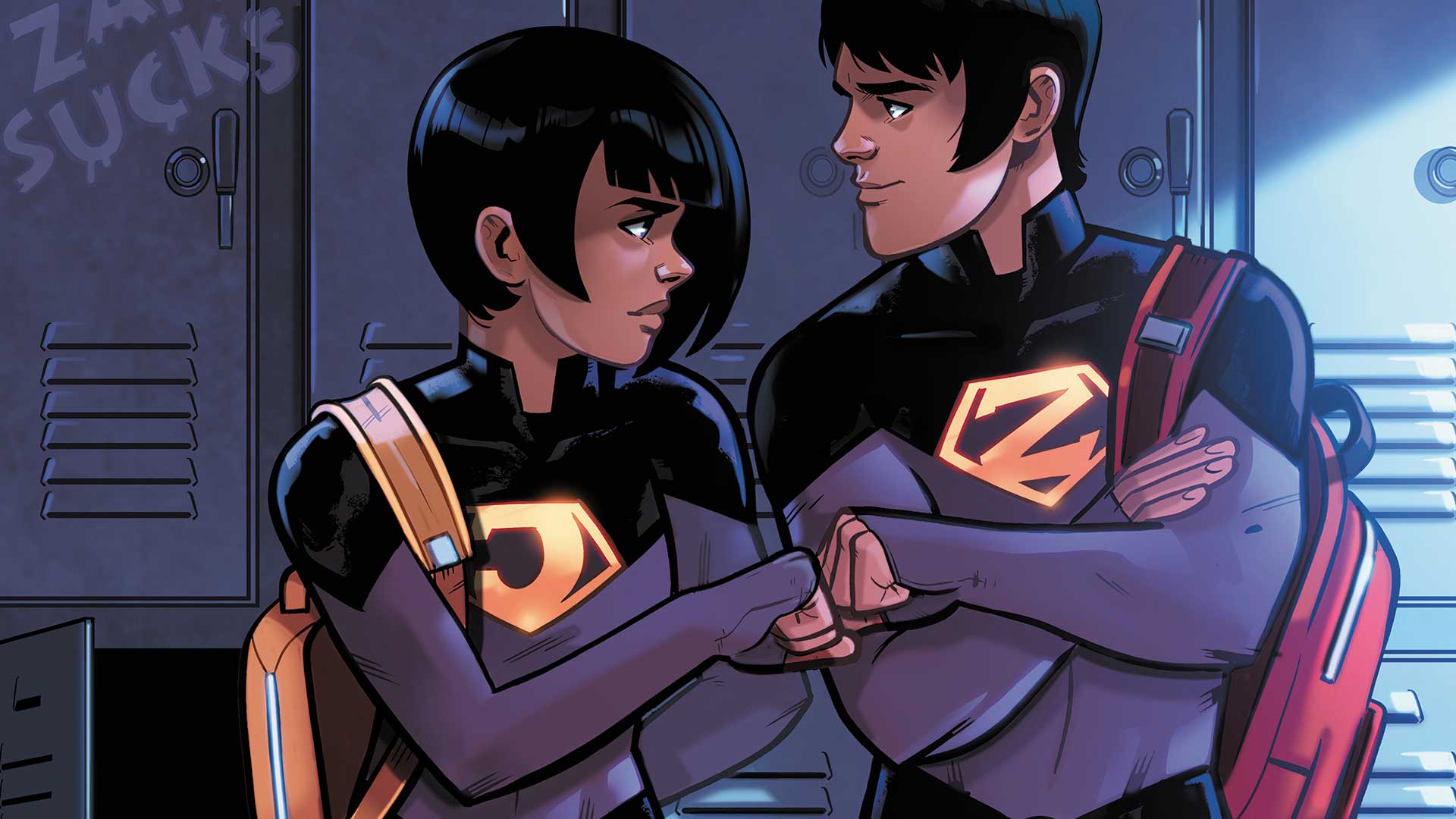 ALL GLOWN UP: Wonder Twin powers activate! Form of a makeover! The first fashion faux pas they ditched were their popped collars in favor of sleeker suits and more stylish haircuts (well for Jayna at least) and showed up in Peter David's 'Young Justice' series. The twins have become fast fan favorites and as of 2019, have their own limited series ‘Wonder Twins.’ The ‘Justice League Unlimited’ episode “Panic in the Sky” had a nod to these two as Project Cadmus creations, Shifter and Downpour. 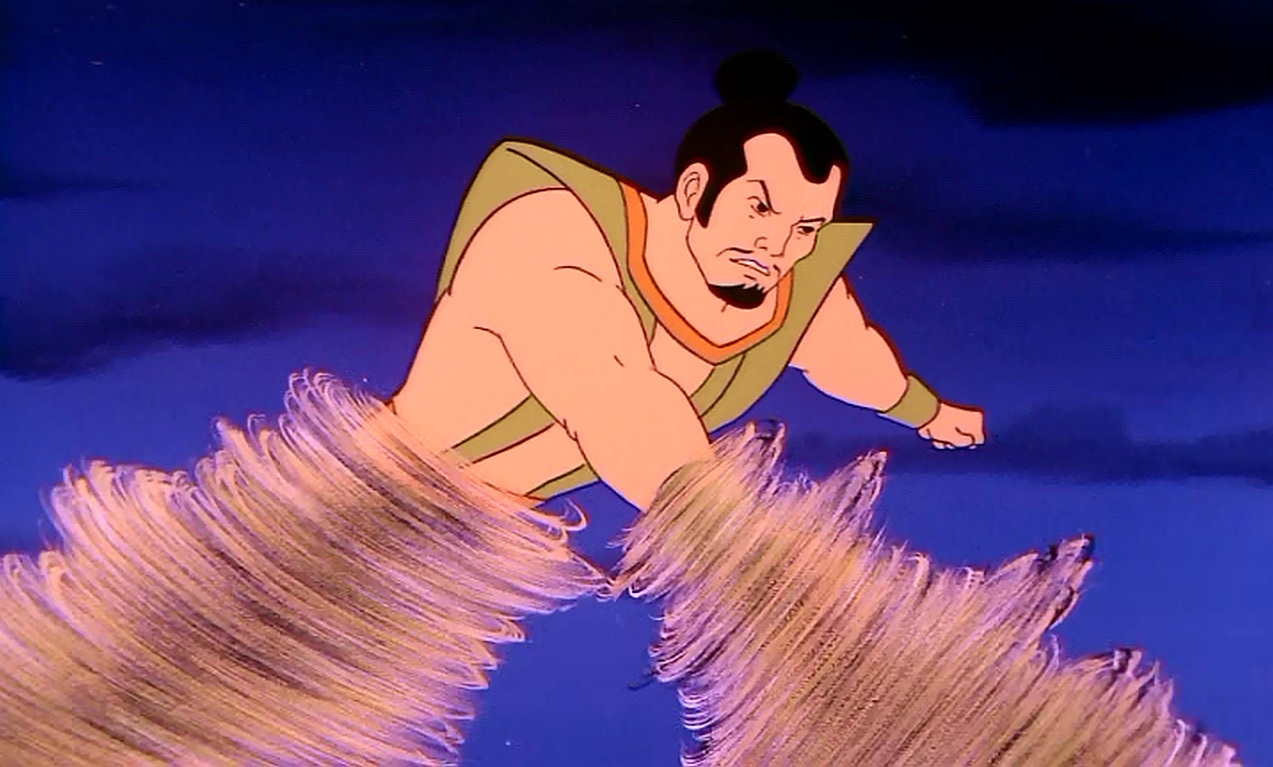 SUPER FRIENDS: Another creation specifically for the Super Friends was Samurai. With the powers to turn invisible, control the wind, manipulate fire, and transform his body into a centaur-nado (half man, half tornado), Samurai was a useful and versatile member of the team. 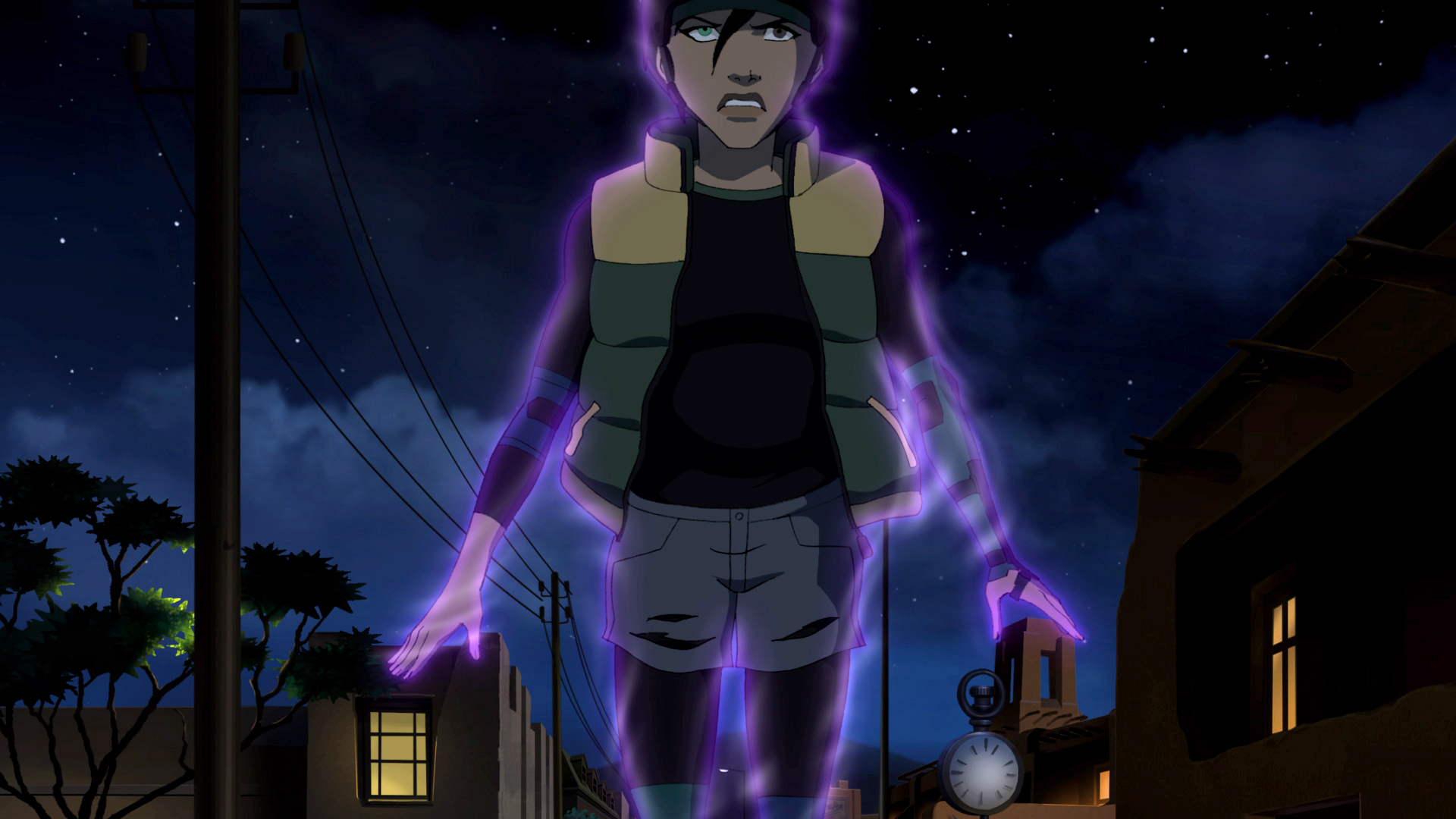 ALL GLOWN UP: Samurai hasn’t been in too much, but his appearances have been well received by fans, including his brief stint in 2010’s Brightest Day storyline. Most recently, Samurai has appeared alongside El Dorado in ‘Young Justice: Invasion.’ This time, Samurai is a genderbent version named Sam. She looks super cool and is tough as nails! Hopefully we’ll see more Samurai in the future and her appearance won’t just be dust in the wind. 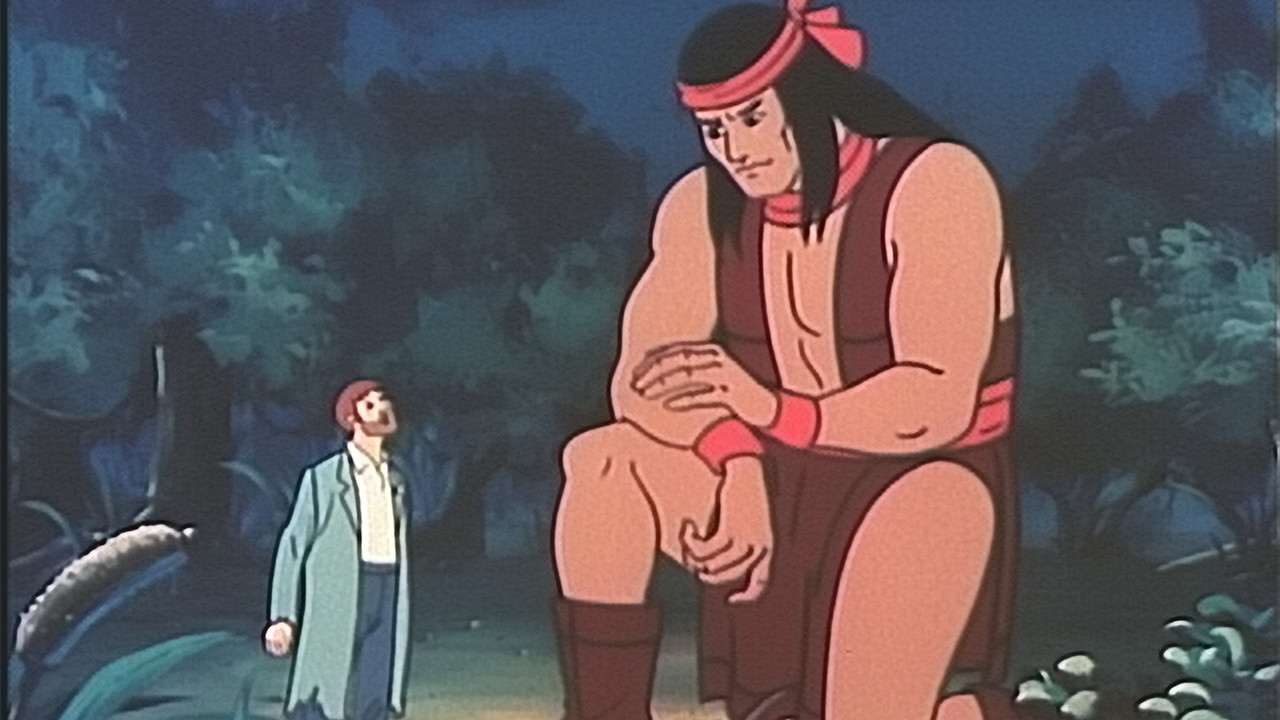 SUPER FRIENDS: We’ve saved the biggest (in size) for last. Apache Chief was known for growing taller so he could hold off Giganta or save cats from trees. He didn’t do much in Super Friends, but that didn’t stop him from getting a 50 story makeover from head to toe. 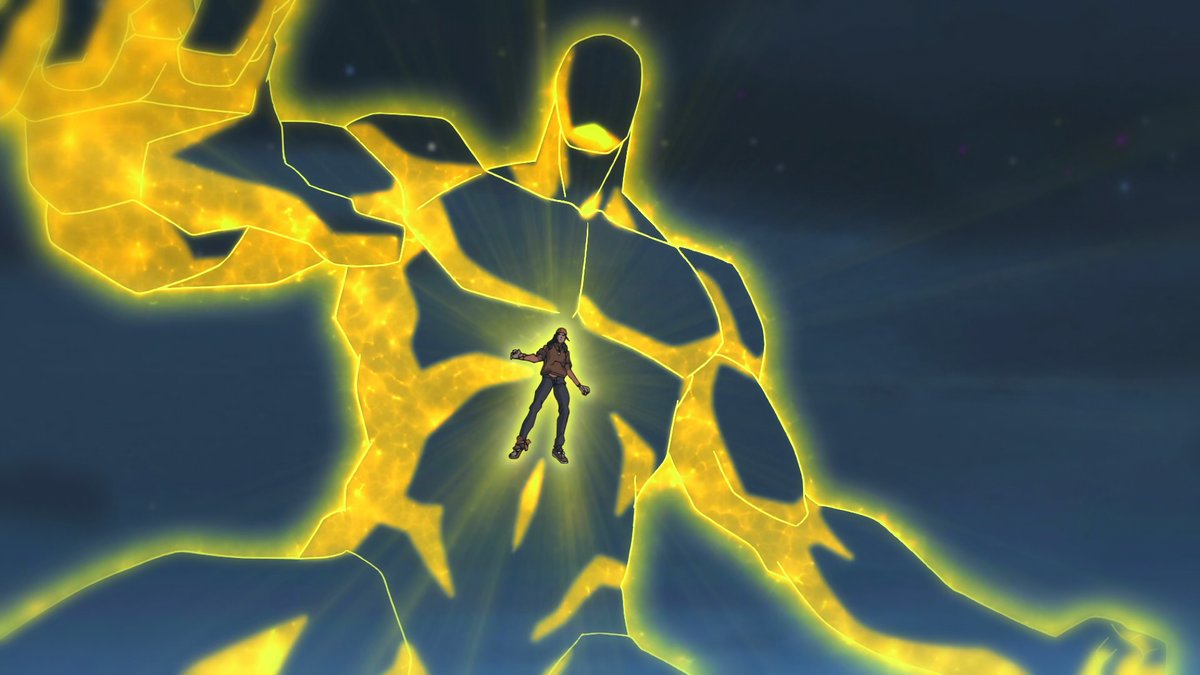 ALL GLOWN UP: Another character reimagined for ‘Young Justice: Invasion,’ this version is named Tye Longshadow. Not only does he get an updated look, but he has a brand new power set. He can still grow enormous, but now in an astral form instead of a physical one. Not only does this  look way cooler, but his astral form packs a serious punch! Fun fact: his grandfather is featured in an episode and looks very much like the Apache Chief from the Super Friend days. Will we see a future episode where he and Superman reminisce about the good ol’ days?

What was your favorite Super Friend adventure? Talk about it in our Community!