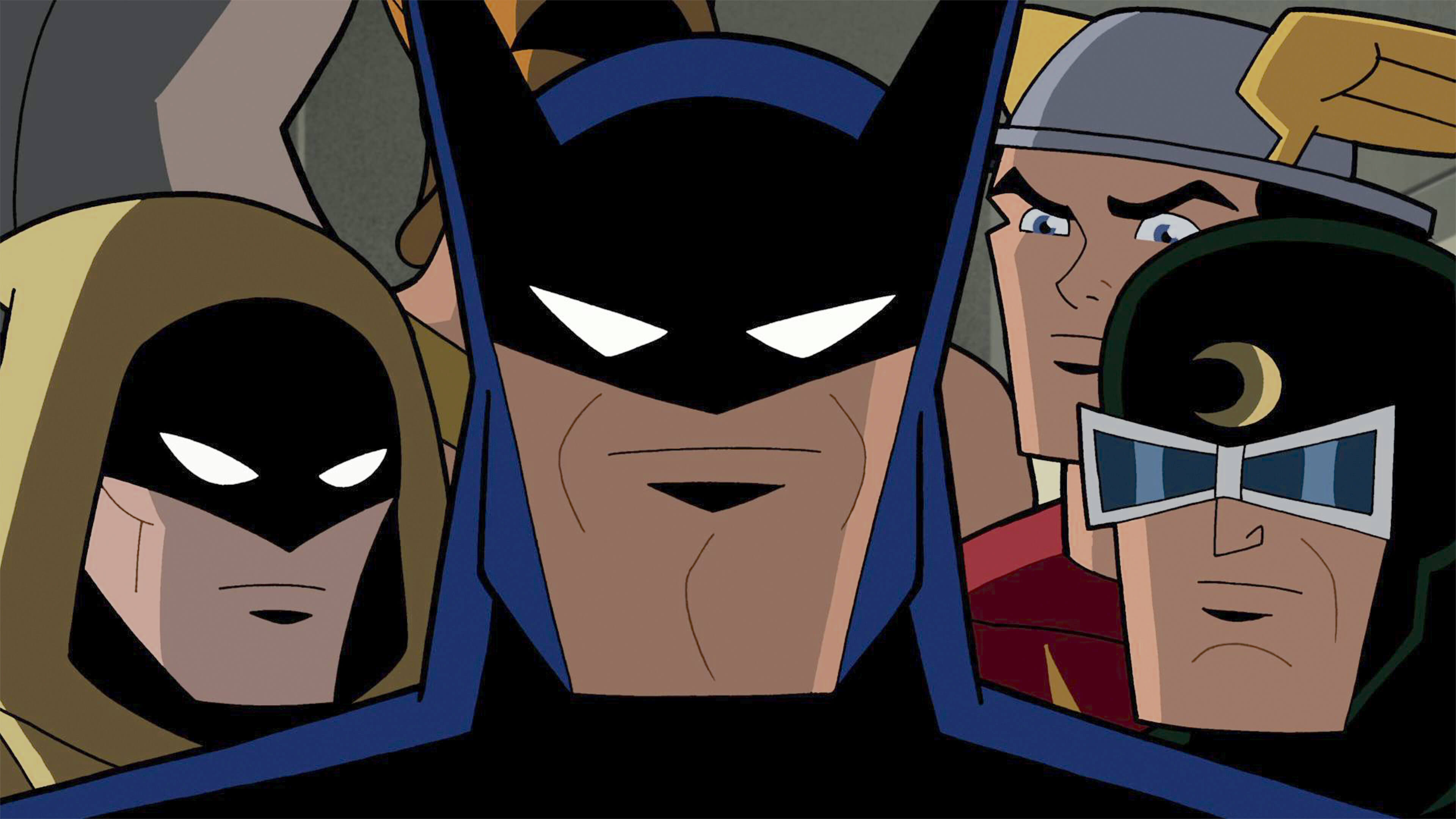 The current DC Universe is built on the backs of Golden Age characters. These young smiling heroes of the '30s and '40s paved the way for today’s champions. While these heroes have appeared in live-action series like Smallville, Legends of Tomorrow, and Stargirl, many of DC's animated series have also featured characters from this era. Let's look at the top 5 Golden Age guest stars in animation! 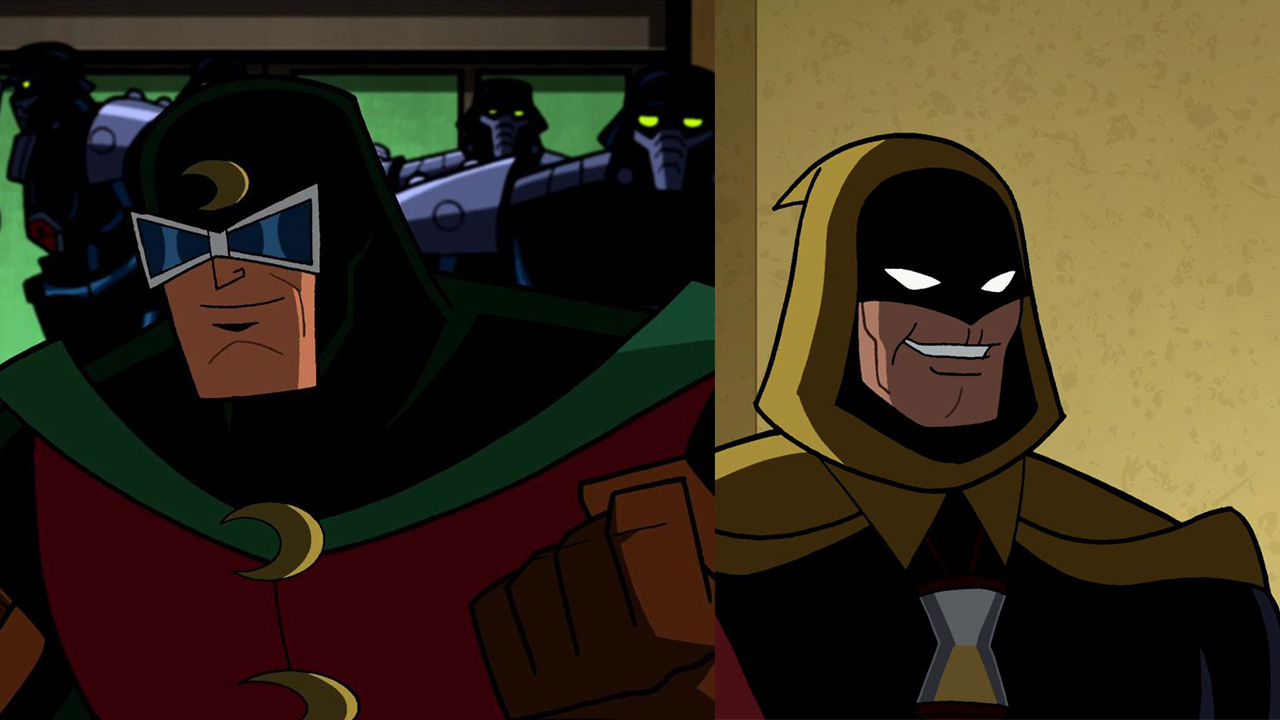 Arguably, Batman: The Brave and the Bold is the animated series that did the most to showcase Golden Age heroes. The aptly named “The Golden Age of Justice!” gave a lot of screentime to the original JSA members: Black Canary, Doctor Mid-Nite, The Flash, Hawkman, Hourman, and Wildcat.

This episode gives a lot of love to two often overlooked characters: Hourman and Dr. Mid-Nite. These two serve as more than just fan service -- they become an integral part of the story in helping Batman defeat Per Degaton. This episode is also unusually heavy given the show's typically light tone, as it deals with the death of the original Black Canary and Wildcat’s guilt surrounding it. 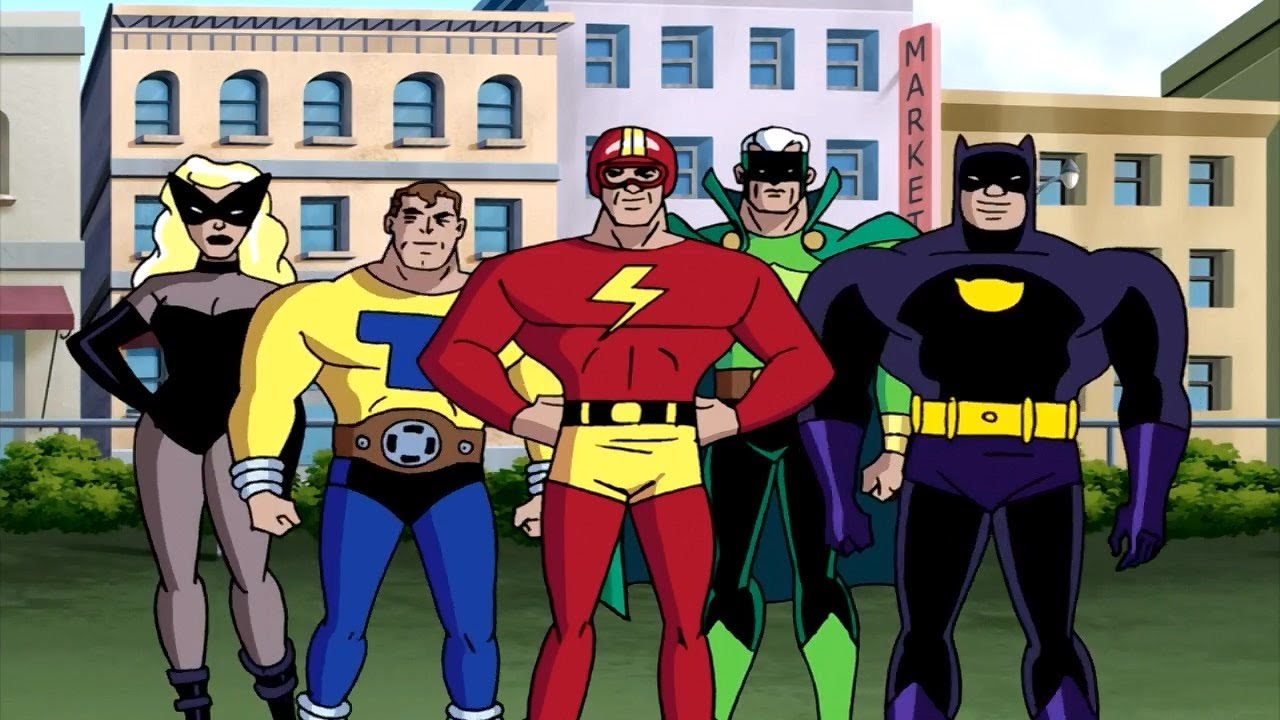 In the episode Justice League episode “Legends,” the League are transported to a parallel Earth. This world is populated with comic-book heroes from Green Lantern’s childhood: Black Siren, Cat Man, The Green Guardsman, The Streak, and Tom Turbine. While they do not have the same names, the heroes represent their JSA counterparts: Black Canary, Wildcat, the Green Lantern, The Flash, and The Atom.

It’s an interesting way to bring these characters to the screen. Trapped in an idealistic '40s/'50s town, they seem a little off. And the quaint homage soon turns into a twisted Twilight Zone episode after it's revealed that the Justice Guild is dead and the team the Justice League has met are psychic manifestations of Ray Thompson, the sole survivor and the Justice Guild’s #1 fan. 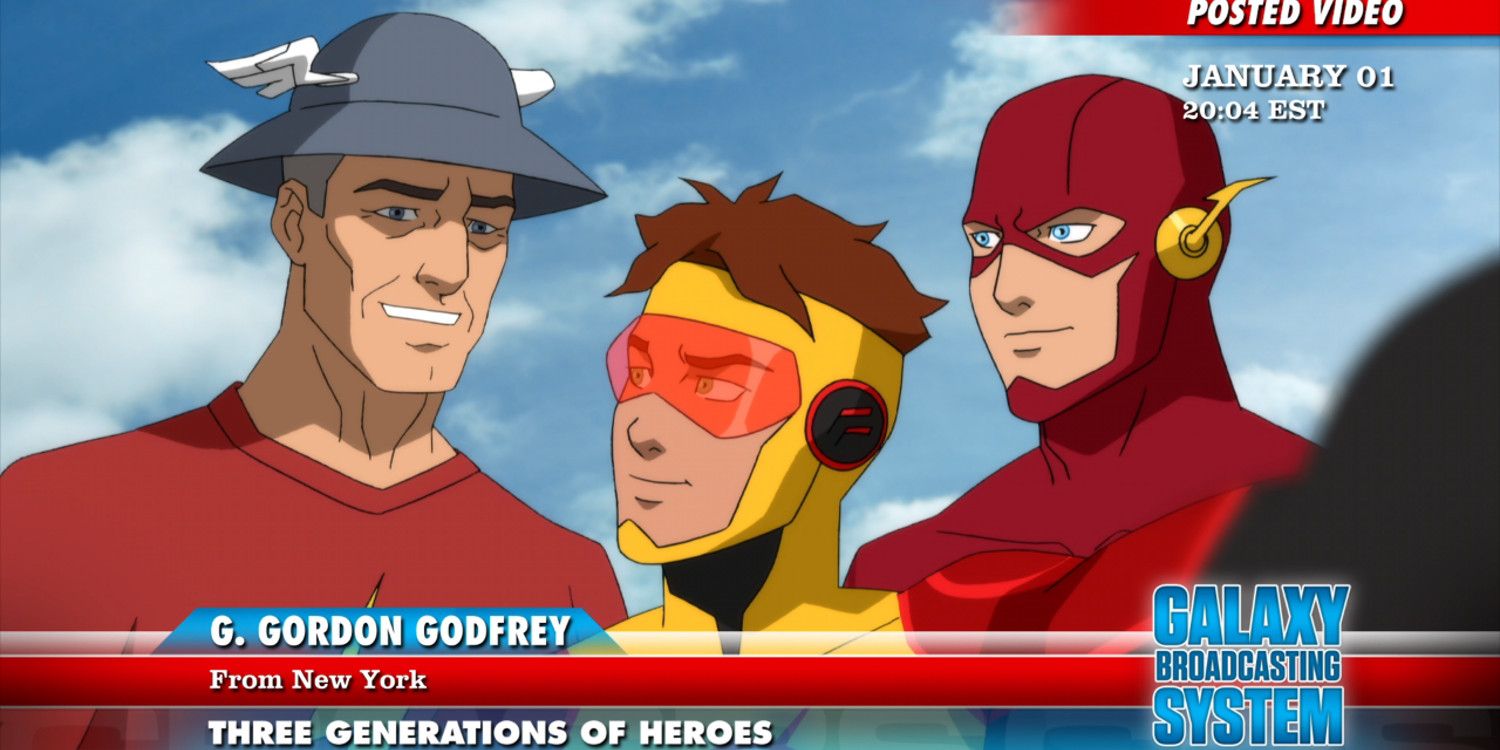 In a show called Young Justice, one wouldn’t expect old-school heroes, but "Bloodlines" delves into the Flash mythology by featuring the original Scarlet Speedster. Jay Garrick might be retired, but that hasn’t slowed him down.

During Jay and Joan’s 70th wedding anniversary, Impulse arrives from the future to visit his young grandparents—Barry and Iris. Jay helps the fellow speedsters defeat Neutron and save Central City (for the umpteenth time). He isn’t worried about his old suit fitting him, but he will have Joan to answer to when he gets home. 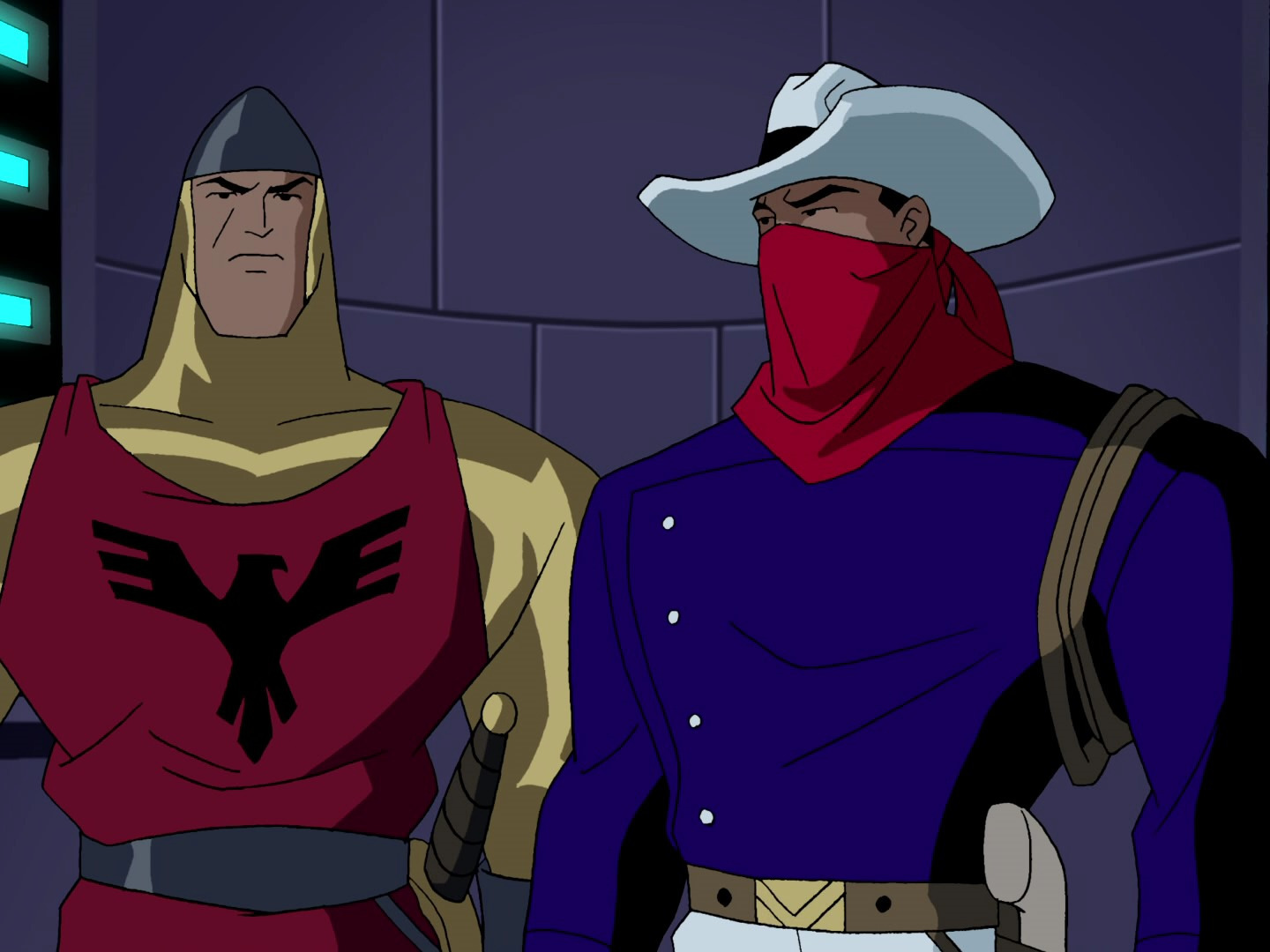 Justice League Unlimited exponentially expanded the Justice League roster. With this expansion came many brief cameos, often mere glorified extras. One of these heroes, however, had an entire plotline devoted to him. In the episode “Patriot Act,” Shining Knight -- a founding member of the Golden Age's Seven Solders of Victory -- is not only responsible for saving the day, but also given a brief backstory.

While serving on King Arthur’s court, he was given an order to destroy a village. Though he refused, Shining Knight was rewarded for succeeding the test of protecting the innocent at all costs. This story ties in beautifully with the present-day threat of General Eiling. It’s really great to see one of the extras getting his long overdue screen time. 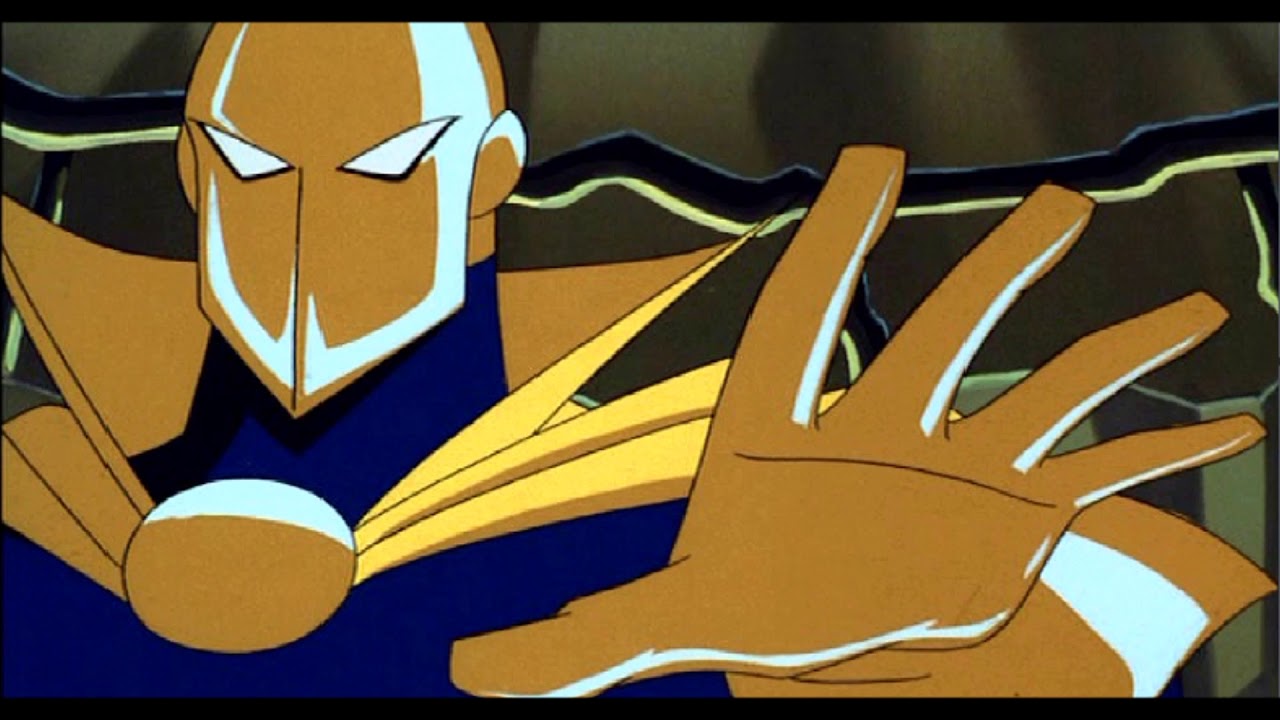 Superman: The Animated Series featured some great DCAU team-ups, including the Flash and Green Lantern. One of the best Golden Age guest stars is Dr. Fate in the episode “The Hand of Fate.”

Superman seeks the aid of the magic user to defeat the evil Karkull, who has taken over The Daily Planet. Though Fate is retired, he dons the Helmet of Nabu once more to help Superman. It’s great to see Superman a little out of his element and forced to rely on a magic wielder to save Metropolis. Plus, Dr. Fate always looks awesome!

Who is your favorite Golden Age guest star? Let us know in our Community!