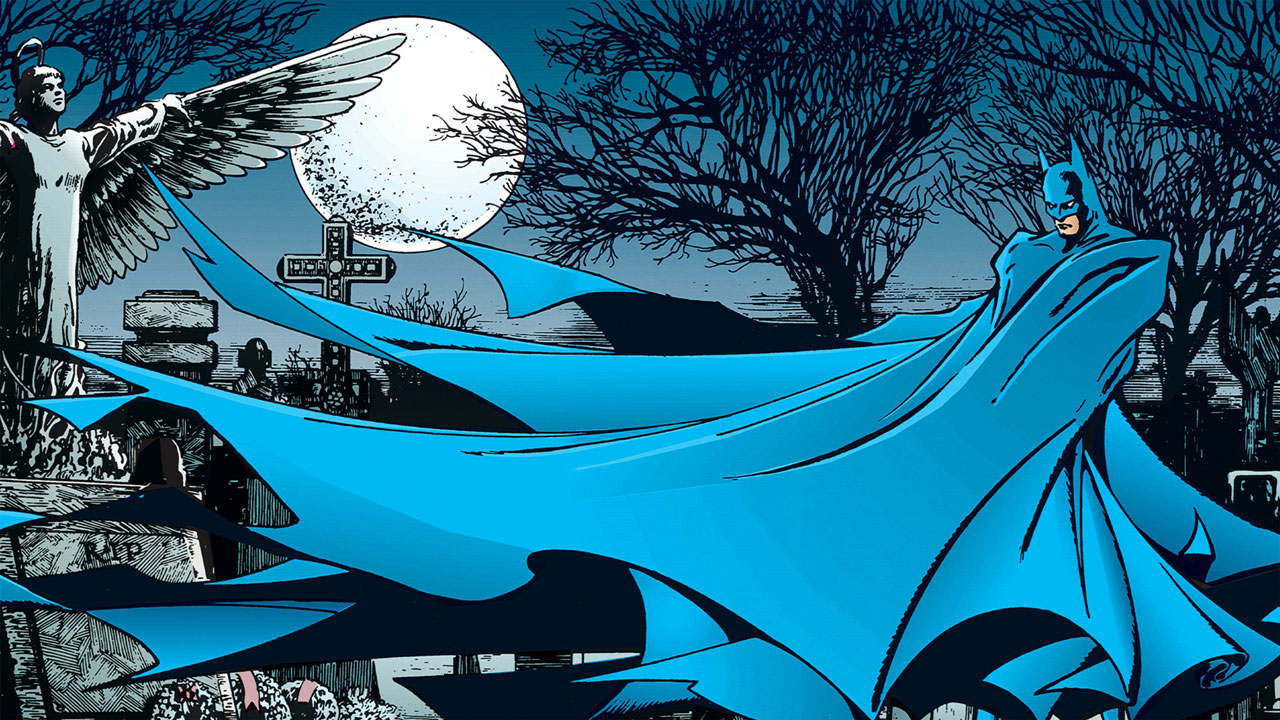 5 Batman Facts You Think Are True (But Aren’t)

Do you consider yourself a Batman expert? Have you spent hours in DC Universe's comics library reading everything related to the Caped Crusader? Well, if you think you know Batman, think again. There are many misconceptions floating around about the Dark Knight and his world, and we’re here to clear some of them up. Here are some of the biggest myths about Batman lore.

MYTH: ALFRED RAISED BRUCE FROM CHILDHOOD AND HELPED HIM BEGIN HIS VIGILANTE CAREER 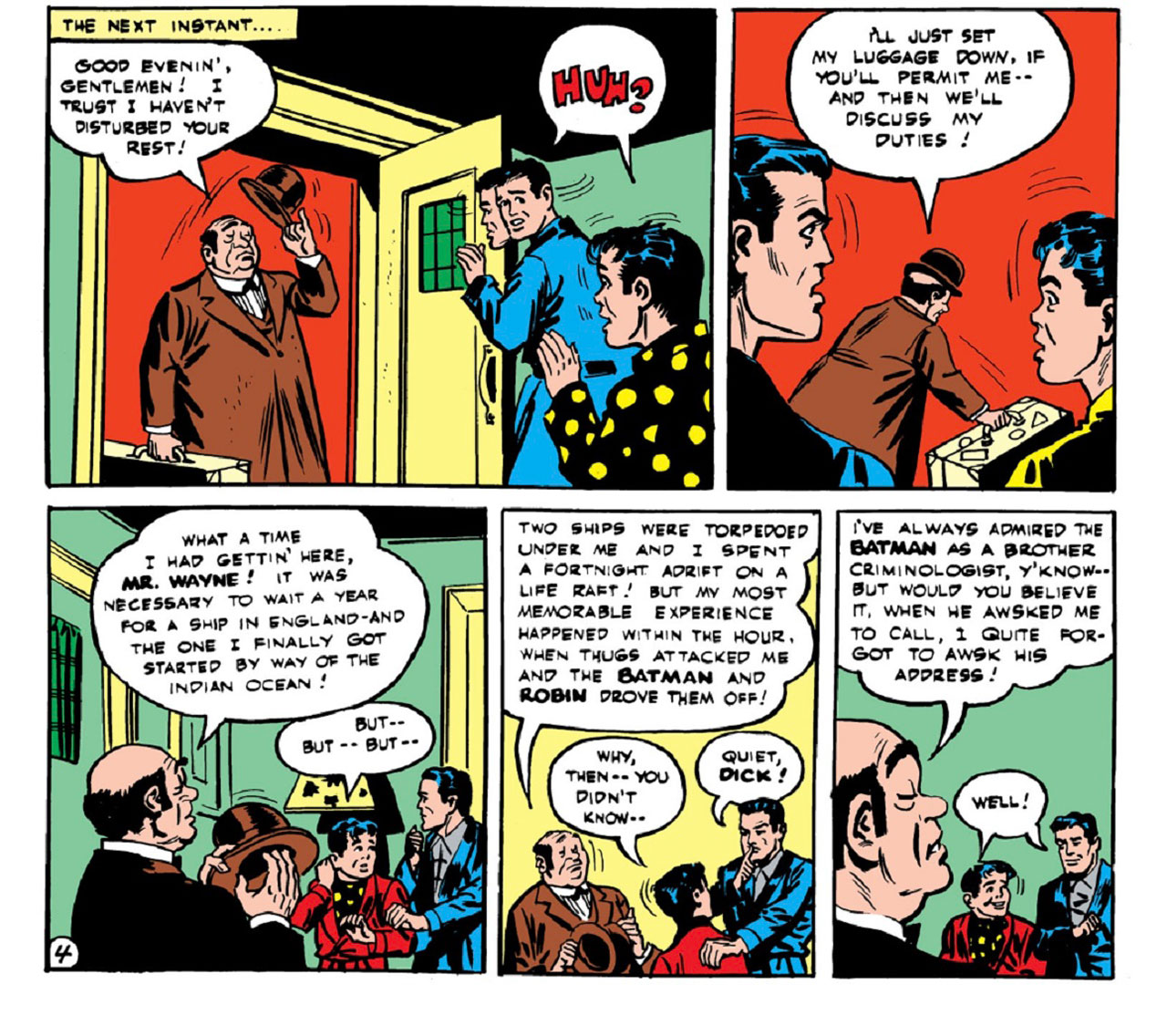 The Truth: Pretty much everything you know about Alfred is wrong. Alfred is a late addition to the Batman saga. He wasn’t introduced to the story until Batman had already met Robin, Joker, Catwoman, and most of his rogues gallery. By the time Alfred met Bruce Wayne, in 1943’s Batman #16, he had already been operating as the Caped Crusader for years. In fact, Alfred was initially unaware of Bruce’s double life until he accidentally discovered the Batcave. If your understanding of Alfred hasn’t been shattered yet, you should also know that for a long time the beloved butler was treated as a joke. While modern books portray Alfred as Bruce’s wise, dry-witted surrogate father, for years he was somewhat dimwitted and not all that great at his job. Check out 1944’s Batman #22 for an example of how Alfred was initially portrayed.

Why the Myth Persists: The idea of Alfred raising Bruce was first seen in the Super Friends episode “The Fear” and then became part of comic book canon in Modern Age continuity. This backstory was also used in the 1989 Batman movie, Chris Nolan’s Batman Begins, and the television series Gotham. Most of the world has known Alfred as the man who raised Bruce, and comic book fans have known no other version since 1987. So it’s not hard for fans to mistakenly believe this has always been the case. It’s probably the best version of the story anyway.

MYTH: WAYNE MANOR IS THE HOUSE BRUCE WAYNE GREW UP IN

The Truth: Bruce didn’t purchase Wayne Manor until he was an adult. In Detective Comics #205, Bruce tells Dick about the day he bought his luxurious home. Readers are treated to a flashback where a realtor shows Bruce the mansion, and the millionaire secretly muses about how this will be the home that launches his crimefighting career.

Why the Myth Persists: We all love continuity, but in the early days of comics it wasn’t strictly observed. Stories were inconsistent on the origins of Wayne Manor, and it was later established as the Wayne family home for generations. "The Return of Bruce Wayne" details the construction of the Manor and what it meant for Bruce’s ancestors. Most flashbacks to Bruce’s childhood show him growing up in Wayne Manor, making the Detective Comics #205 flashback puzzling to today's Batfans. 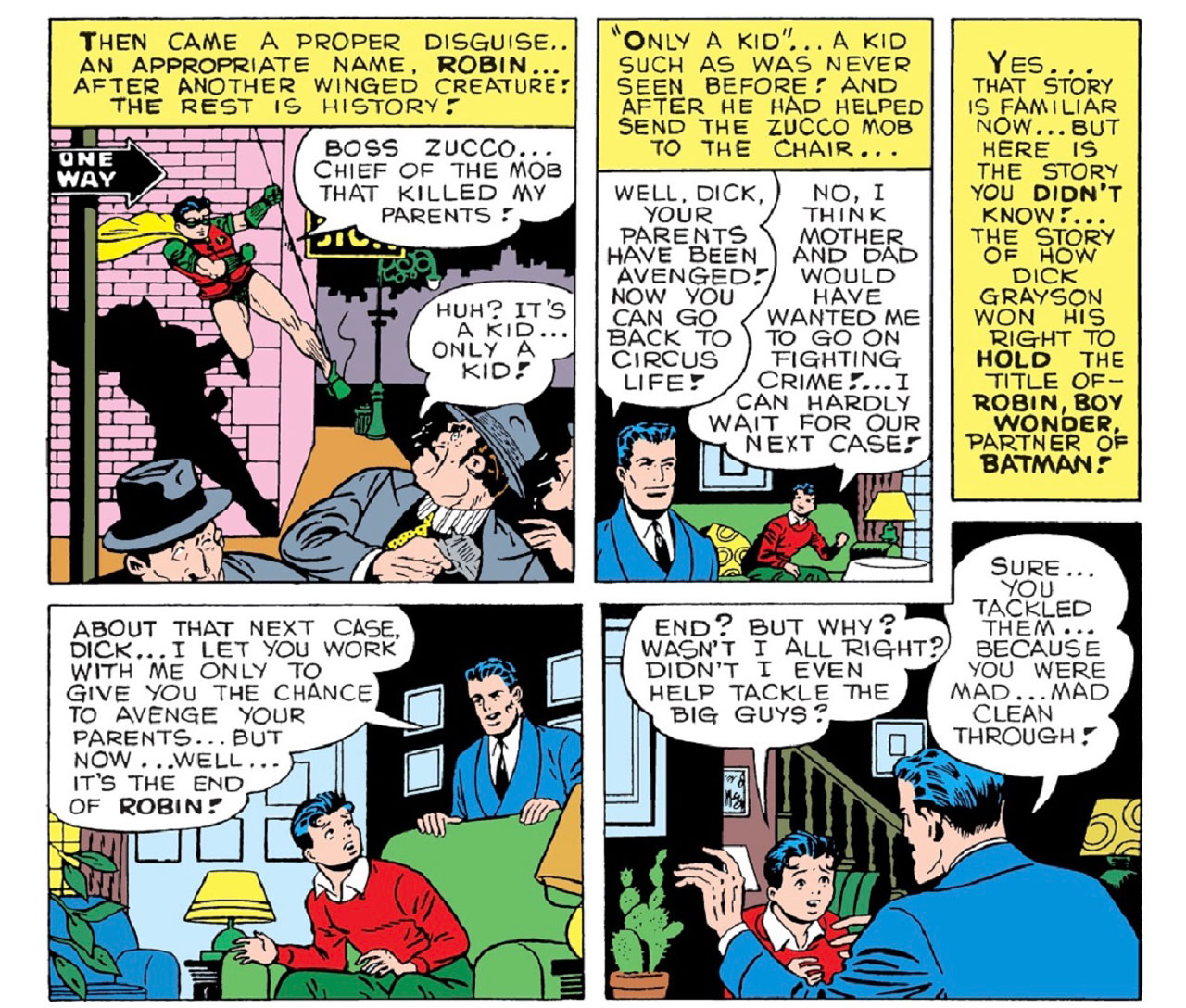 The Truth: When Bruce began training Dick as Robin, he had no intention of keeping him. Robin existed to help catch Boss Zucco, then Dick was supposed to return to his life as a traveling acrobat. Check out 1940’s Detective Comics #38 if you think we’re making this up. After Boss Zucco is arrested, Bruce tells Dick he’s going back to the circus, and the only reason Robin sticks around is because he insists on it. Nowhere in the story is there any mention of Dick being Bruce’s ward, or long term plans to raise the boy. In fact, if you check out the original story, Bruce never gets custody of Dick, Batman just takes the orphan into his car and they drive away from the circus without telling anyone. 1945’s Batman #32 expanded upon the origin story with Bruce forcing Dick to retire as Robin after he avenged his parent’s death, and the Boy Wonder going to great lengths to convince Batman to make him his permanent partner. 1969’s Batman #213 is the first version of the origin story that shows Bruce legally gaining custody of Dick.

Why the Myth Persists: Robin’s origin has been retold many times, and most versions have cleaned up some of the bugs in the Golden Age narrative. In most cases, Bruce takes Dick in because he sees a kindred spirit and wants to give the orphan a better life. Dick becoming Robin is usually an afterthought to the adoption process. This was the case in "Batman: Year Three", Batman: The Animated Series, Batman Forever, and DC Universe’s Titans. These retellings have played such a big part in how fans perceive Robin’s history that it’s easy to be unaware of the original story. 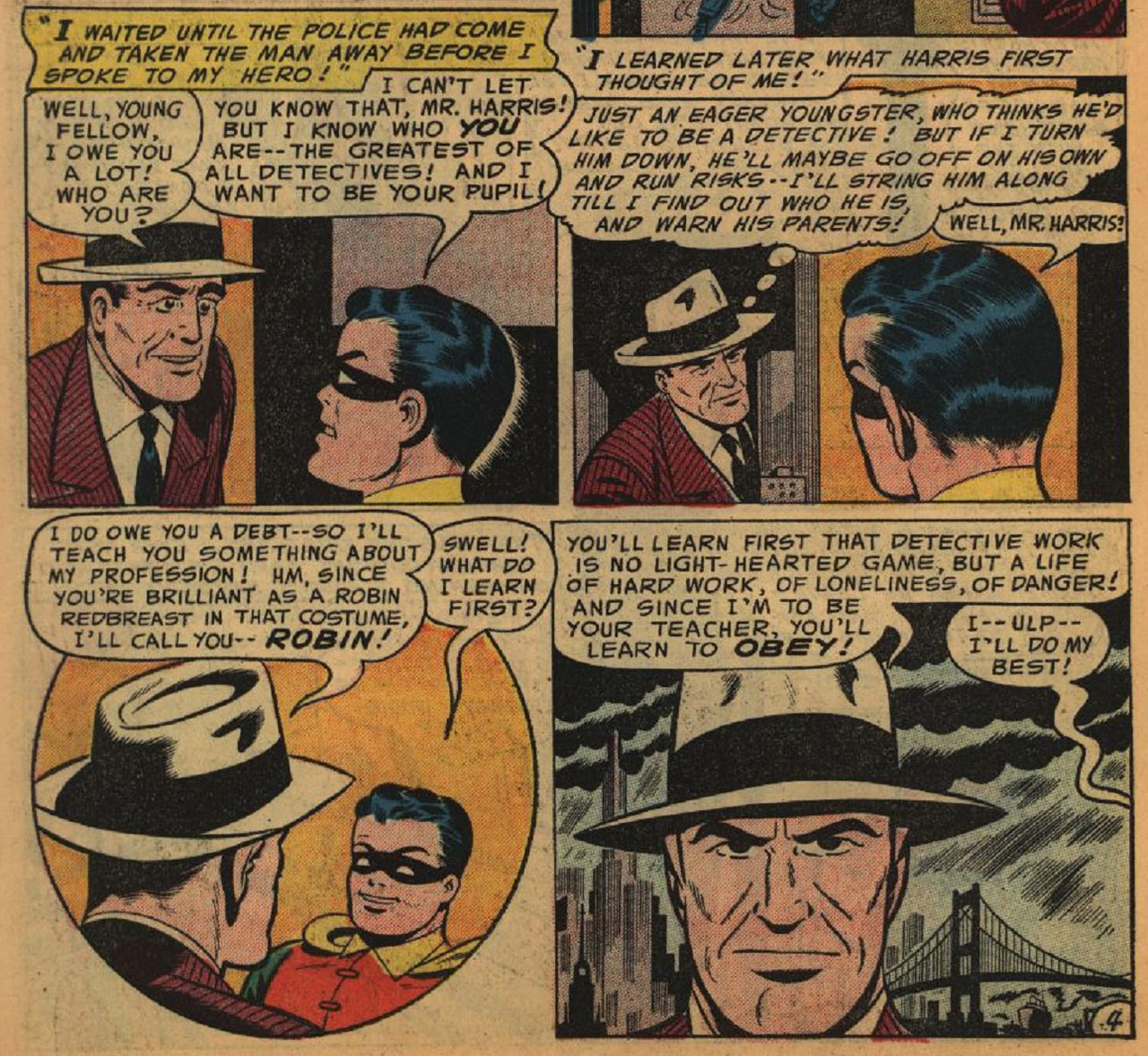 The Truth: Some fans argue over how many Robins there are (and if Carrie Kelley counts), but every debate has left out the original Boy Wonder. Dick Grayson was not the first Robin, Bruce Wayne was! Years before he became Batman, a young Bruce stanned a superstar detective named Harvey Harris and approached the man about becoming his apprentice. The billionaire boy didn’t want Harvey to recognize him, so he wore the iconic Robin costume. Harris agreed to train the mysterious boy, and gave him the name Robin. This wasn’t a one-off forgotten story either. Bruce’s tenure as Robin was revealed in Detective Comics #226, and later stories like Batman #213 and Untold Legend of Batman #1 referenced it.

Why the Myth Persists: Although Harvey Harris was reimagined for Modern Age continuity (in Detective Comics Annual #2), the story was altered so that Bruce never became Robin. This continuity has positioned Dick Grayson as the first Robin, and media retellings followed suit, making Bruce’s tenure as the Boy Wonder a forgotten chapter in Bat lore. Heck, we even left out Bruce in our comprehensive Robin history for the Boy Wonder’s 80th anniversary.

MYTH: JOKER FELL INTO A VAT OF CHEMICALS IN THE KILLING JOKE 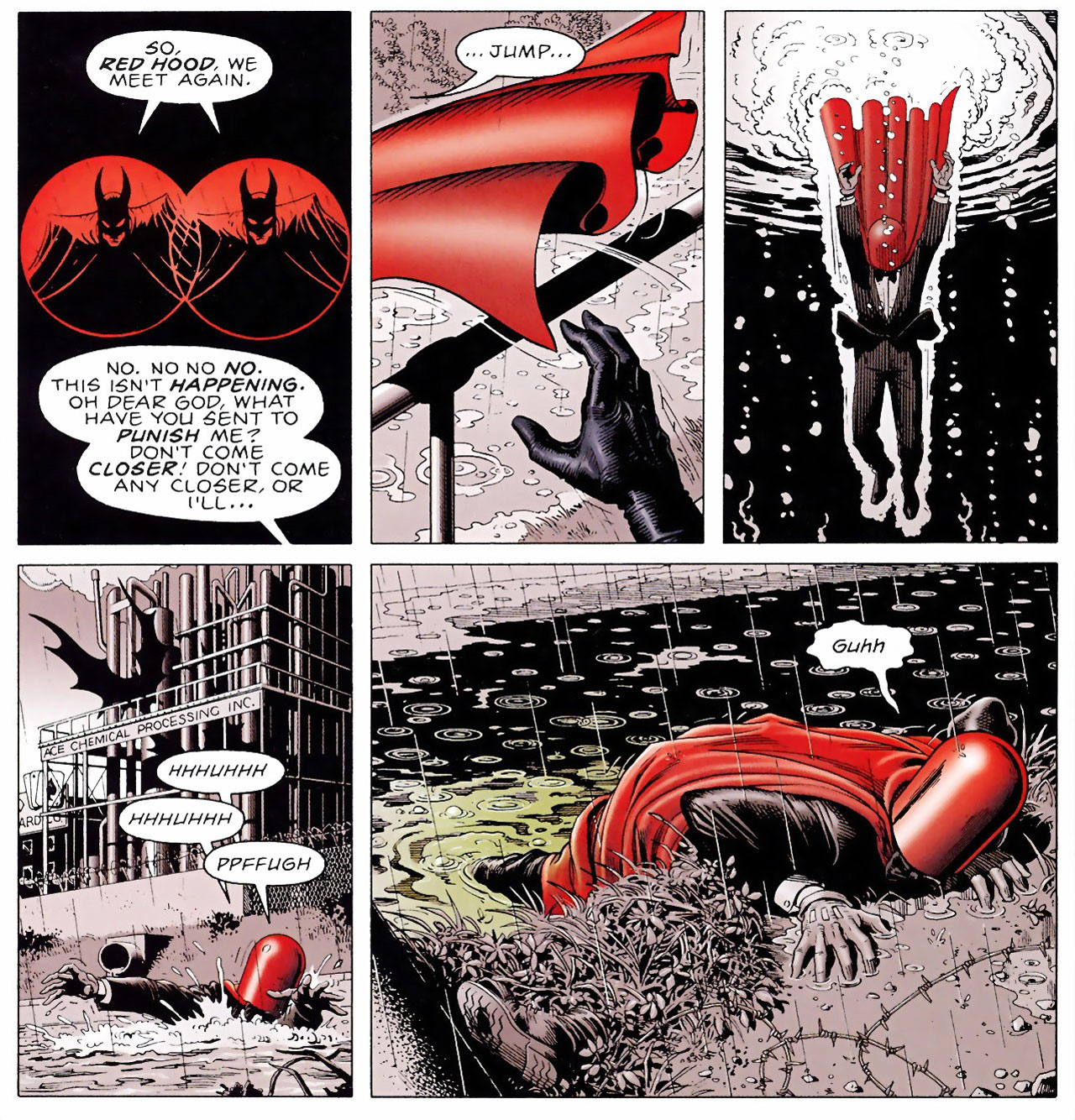 The Truth: If you think the Joker fell into a vat of chemicals in his origin flashback in 1988's The Killing Joke, then you’re experiencing a case of the Mandela Effect. Despite what numerous summaries and fan recollections say, the man who would become the Joker didn’t fall into a chemical vat during his origin flashback. Don’t believe us? Check your copy and you’ll find that Joker ran from Batman, and jumped over a railing into a body of water. Since the water was filled with chemical waste, the unnamed man became the Joker. Many people recall the Joker falling, but in the Killing Joke version -- and in the original version of his origin in Detective Comics #168 -- he jumps intentionally. Although the future Clown Prince was at a chemical plant, he didn’t fall into a vat.

Why the Myth Persists: One year after The Killing Joke was published, director Tim Burton’s first Batman film was released, ushering in a new wave of Batmania. Most moviegoers fondly remember the cinematic Joker’s origin, which involved a mobster named Jack Napier (played by Jack Nicholson) accidentally falling into a vat of chemicals after a confrontation with Batman. Because both origins involve a chemical plant caper, and Joker receiving his clown complexion after being submerged in toxic waste, fans have merged the stories in their head. Subsequent Joker origin stories in the media used the “accidentally fell into a chemical vat” version, and it’s become the standard. When writer Scott Snyder and artist Greg Capullo retold the Joker’s origin once more in 2013’s Batman #24 they had the Red Hood deliberately fall into a chemical vat, bringing the more familiar version into canon.

How many of these Bat myths have you believed? Let us know in our Community!