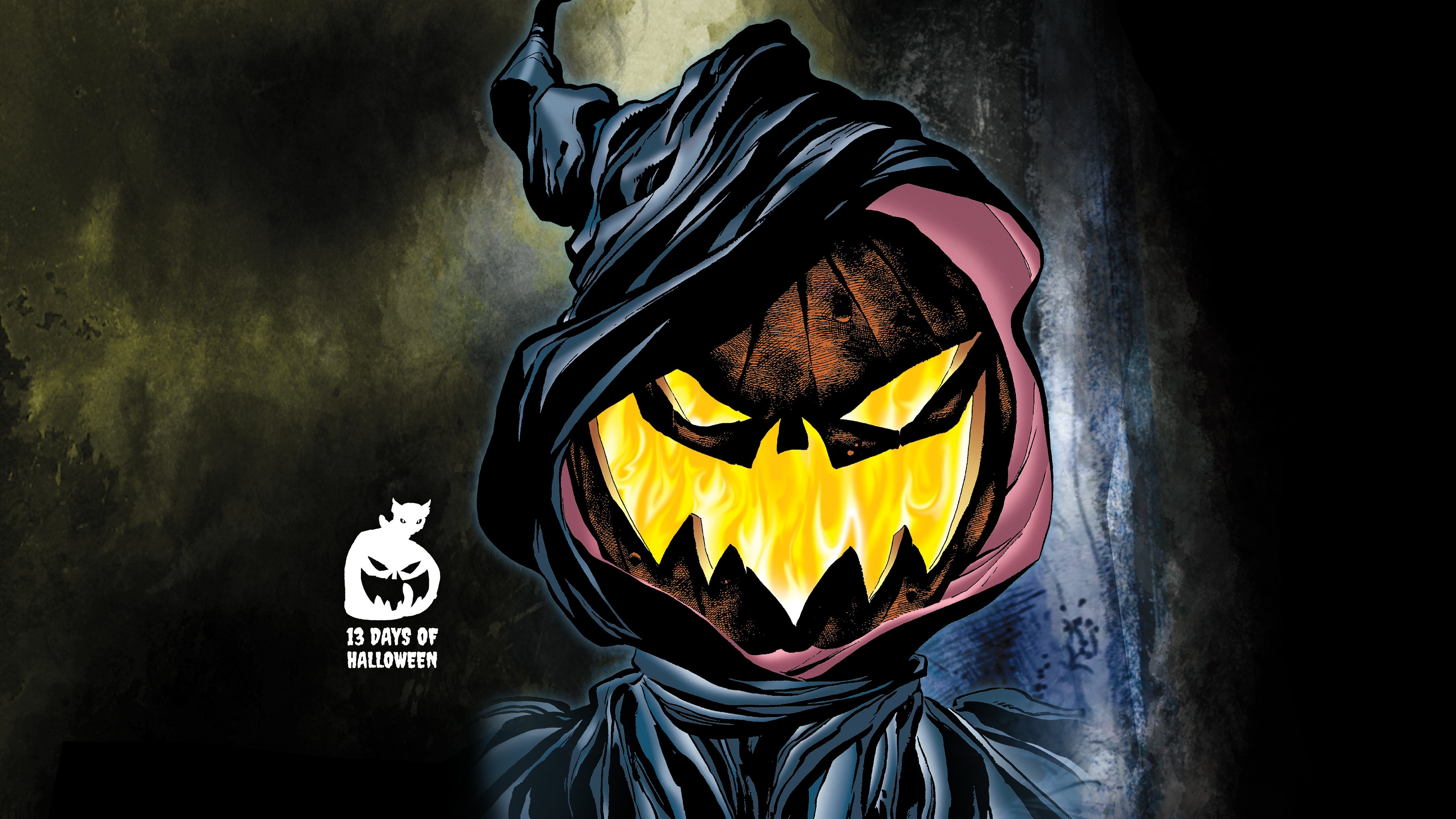 DC Super Heroes are no strangers to celebrating good old-fashioned American holidays, and Batman is no exception. From the Denny O’Neil penned/Frank Miller illustrated Christmas story in DC Special Series #21 to twelve different holidays in The Long Halloween, one can find an adventure for every major national celebration in the year. But ask this, how many stories kill two birds with one stone? 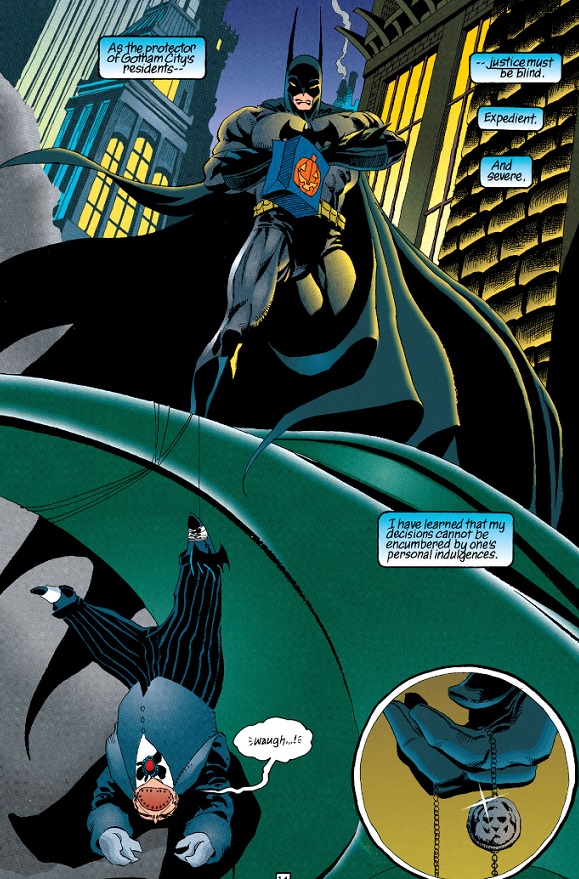 Bruce and Lucius Fox are attending a charity event when it's crashed by the Penguin looking to rob its wealthy attendees. As Batman leaps into action to battle the Penguin, he comments on how unyielding his life’s mission is, and how that requires he be as severe and dispassionate as possible. This includes turning down Lucius’ offer to work with him and help diversify Wayne Enterprise’s fortune in order to help the lower-class population in Gotham. Additionally, the crowd’s reactions to the brutal beating Batman doles out to the Penguin speak to the inhuman creature of the night persona he’s adopted through his violent methods.

Returning home after the battle, Bruce falls into a restless sleep and is visited by the ghostly image of his father, adorned by chains. 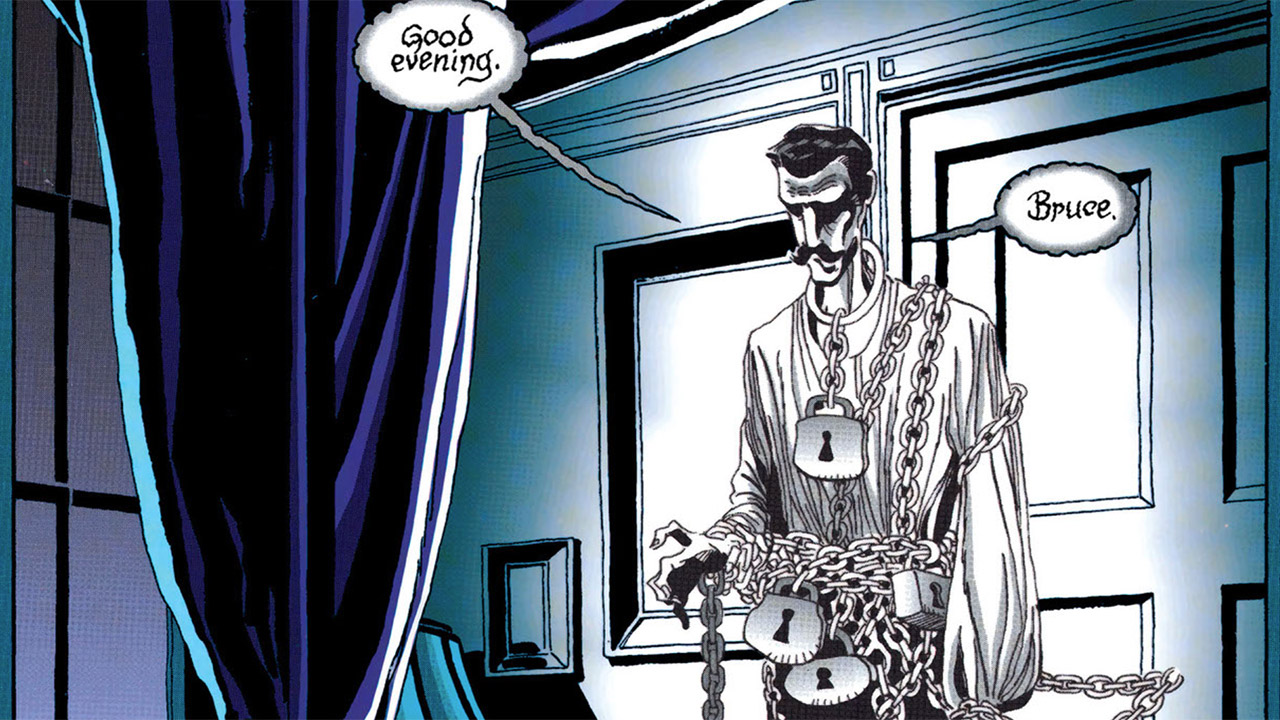 Like Jacob Marley warning Scrooge, the ghost of Thomas Wayne tells Bruce that he will be visited by three spirits sent to rid his soul of the foulness brought on by his life as the Batman.

The first specter arrives in the form of Poison Ivy, who reminds Batman of a past memory, where a child-aged Bruce grew disillusioned with his father after a cancelled trick-or-treat trip due to a medical emergency. Later, during a time when Bruce was training in Paris as a young adult, he saved Lucius Fox from a mugging who in gratitude offered a financial partnership.

Bruce awakens and goes downstairs where he finds the Joker lounging in his home. In a twist, Joker shows Bruce how haunted and threatening Wayne Manor – and by extension Bruce Wayne – has become in the hearts of children. They, rather than criminals, have become a "cowardly and superstitious lot." 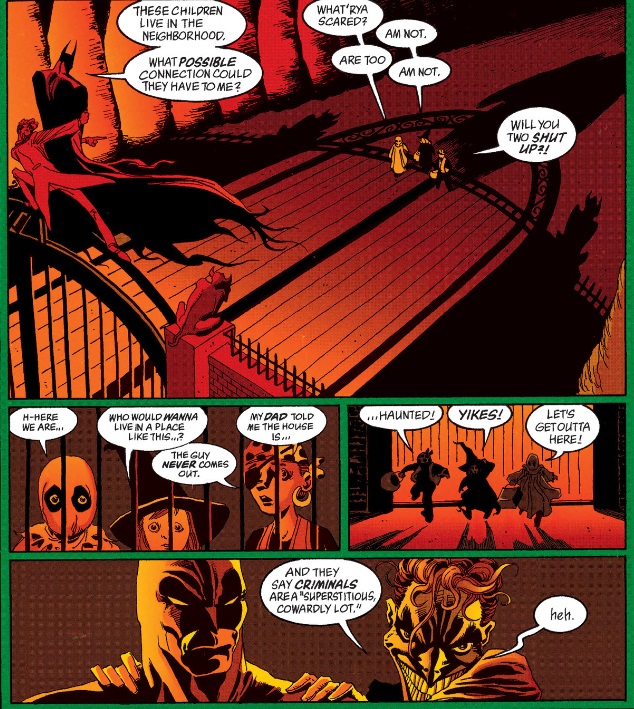 The final spirit is a haunted, reaper-looking figure that takes Bruce to a ghastly future – one in which Wayne Manor is decayed and an aged Alfred visits the graves of the Waynes, including Bruce’s. Bruce unmasks the spirit and sees the skull-faced image of a bat-cowl. 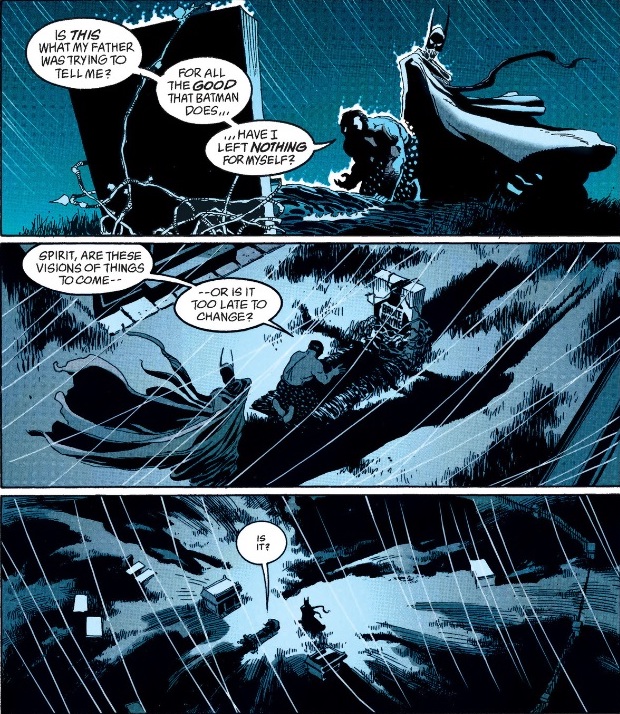 Coming to terms with the spectral warnings, Bruce pleads for a second chance. as he’s awakened by Alfred on Halloween morning. He immediately meets with Lucius to arrange a partnership in forming The Wayne Foundation in order to help the less fortunate. The story ends with Bruce staying home for a change and handing out Halloween candy to the children of Gotham. Armed with the understanding that his single-minded war on crime resulted in dark ramifications on his name as the last living heir to the Wayne fortune, he resolves to use his wealth to help the city by day, while continuing his caped crusade by night. With the spirit and theme of goodwill instilled through the Christmas holiday by Dickens and weaponized through the Halloween holiday by Loeb, Ghosts remains a unique take on the character and heroism of Batman, and a special story for DC in how it manages to develop the central character through the use of two holidays.