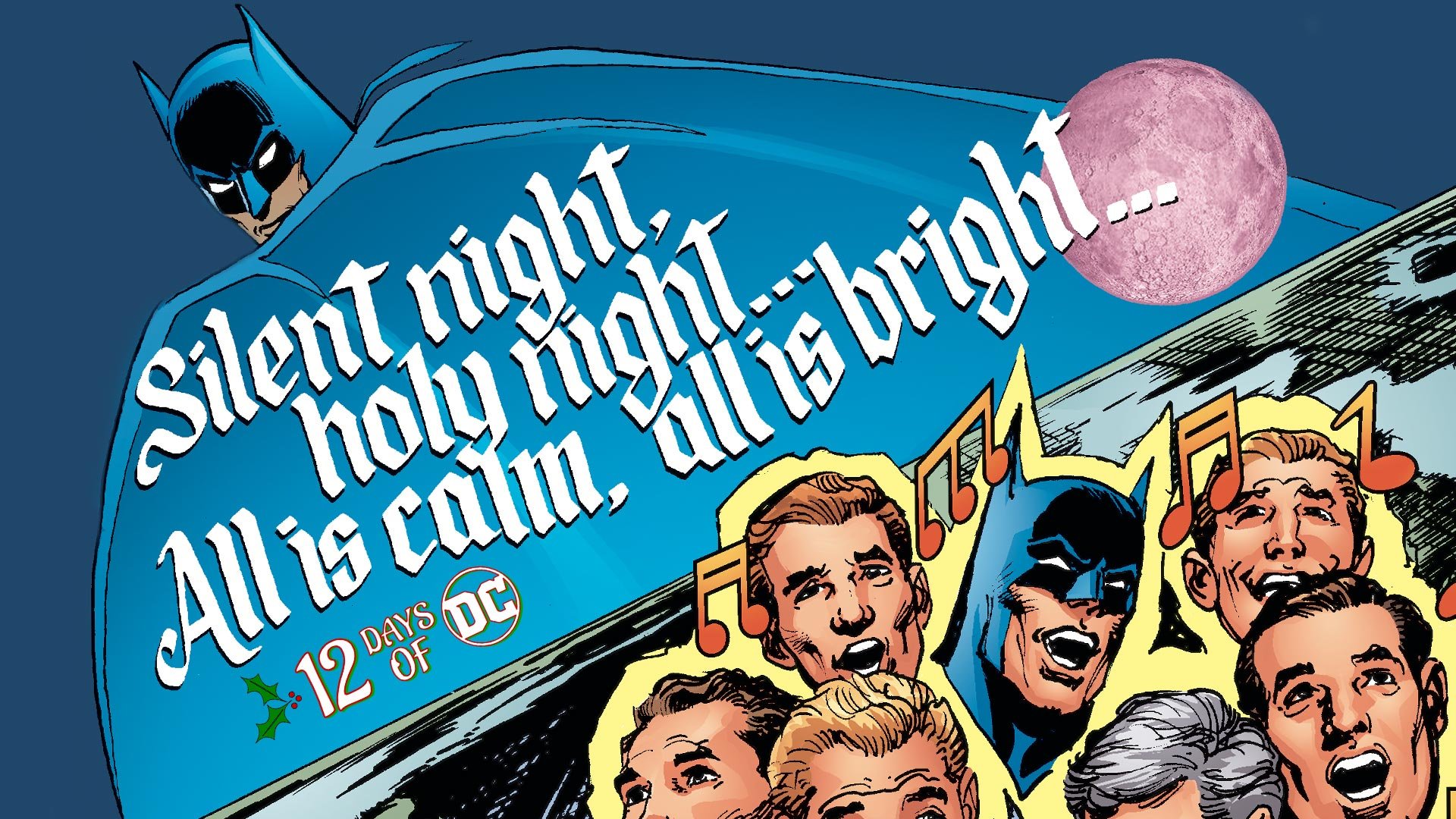 Merry Christmas DC fans! We hope you’ve enjoyed our 12 Days of DC. We’ve celebrated with Larfleeze, enjoyed Hanukkah with Static, and now it’s time to end our journey by stopping by Gotham City for Christmas Eve. We know what you’re thinking – isn’t Gotham a dangerous place to spend Christmas Eve? Sometimes the magic of Christmas can make the impossible come true, and that’s just what the Dark Knight learned in “The Silent Night of Batman,” published in Batman #219.

The story opens with Batman spending his Christmas Eve exactly as you would expect him to – patrolling the streets. Commissioner Gordon calls Batman to police headquarters, and tells his old friend to take a break and enjoy the GCPD Christmas party. If you know Batman, then you know how ridiculous that request it. Crime doesn’t care what holiday it is, so how can Batman take the night off? 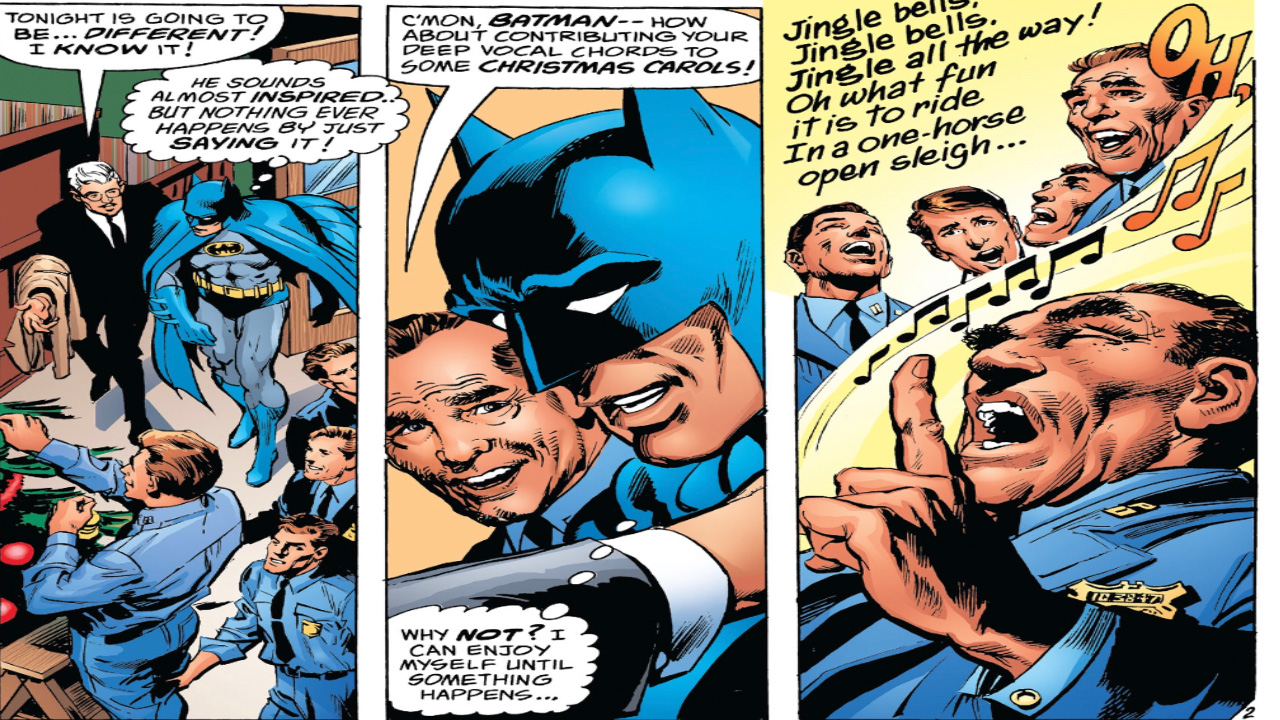 Yet something compels Batman to listen. He justifies it by telling himself that he’ll celebrate until someone radios in about a crime. The Dark Knight throws caution to the wind and joins the party. He even carols with the cops. The unforgettable sight of the usually stoic Dark Knight singing his heart out is worth the price of admission. As the Caped Crusader parties at the GCPD, the story cuts to various Gothamites and shows how they’re spending the holidays. 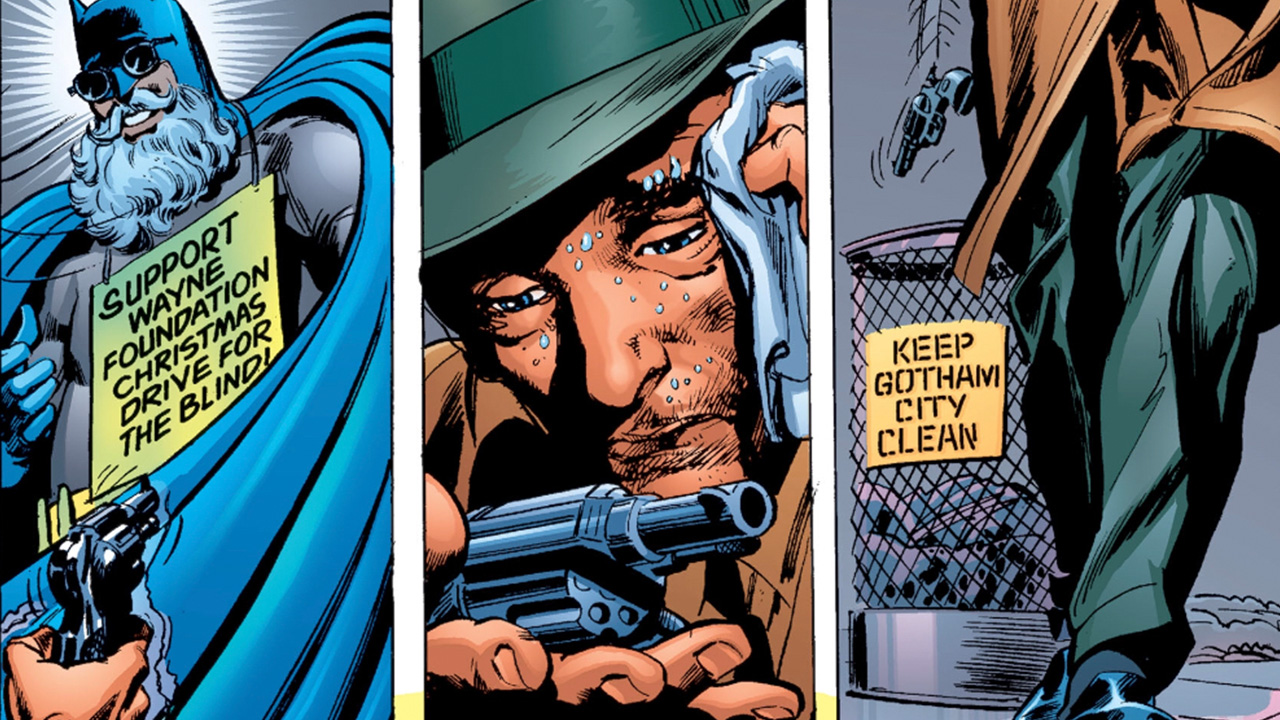 Citizens on the verge of committing crimes are stopped by their conscience. People begin doing good deeds for their neighbors. A suicidal woman is reunited with her husband. For one night goodness reigns over Gotham, and Batman is able to enjoy himself. By the time the Christmas sunrise arrives, the Dark Knight realizes he’s been singing all night and no crimes have been reported. The Gordon Batman was conversing with fades away, as if he was an illusion. The real Commissioner soon speaks with Batman, leading the Dark Knight to wonder what he just witnessed. 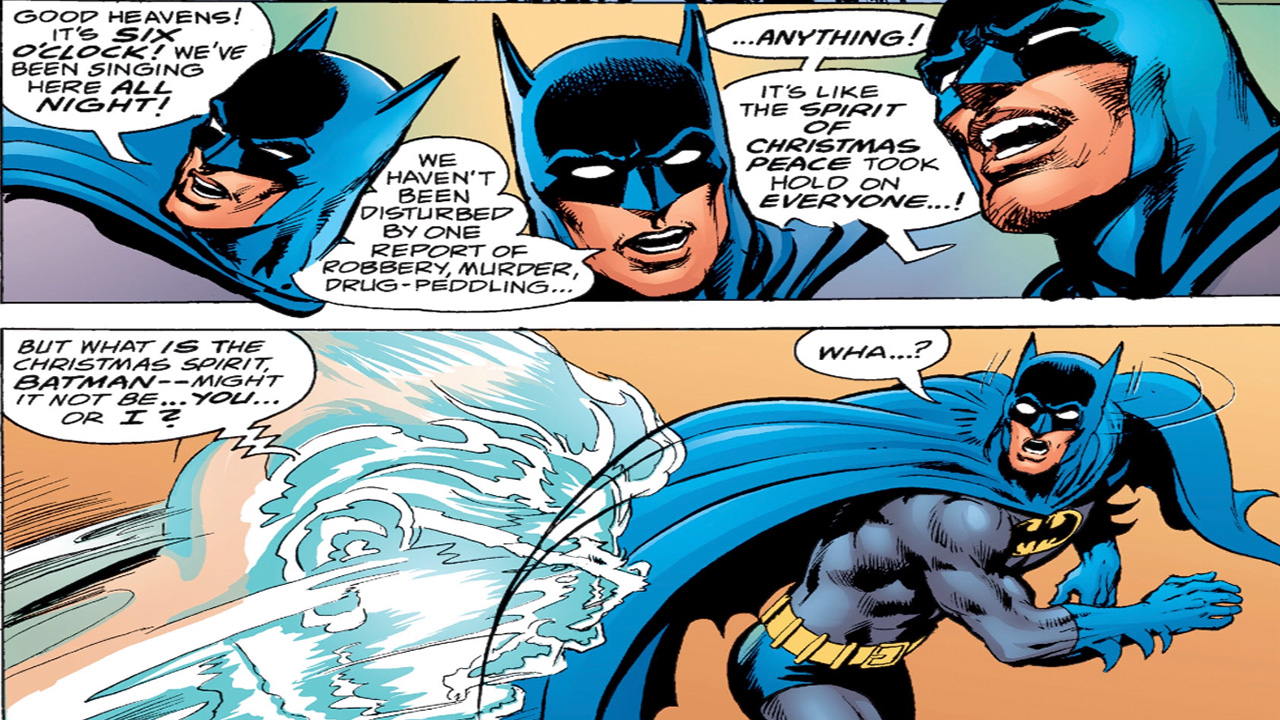 What was keeping Gotham safe? If Gordon faded away like a ghost, then who was he really? The story suggests that perhaps it was the Christmas Spirit. Some of you might think the concept is far-fetched for the realistic world of Gotham City, but is it really? Batman has dealt with beings like the Spectre, the Phantom Stranger, and traveled to multiple planes of existence. Is the Christmas Spirit guarding over Gotham City really that hard to believe? And isn’t believing one of the cornerstones of Christmas?

Some of you might look at the sight of Batman singing and say “Well that was 1969, times have changed and he would never do that in a modern book.” Well hang onto your tinsel because this story had a sequel in 2016 where the Dark Knight sang again. “Harley’s Not So Silent Night,” published in 2016’s Batman Annual #1. The story features a little bit of carpool karaoke between Batman and Harley, but let’s not get ahead of ourselves. 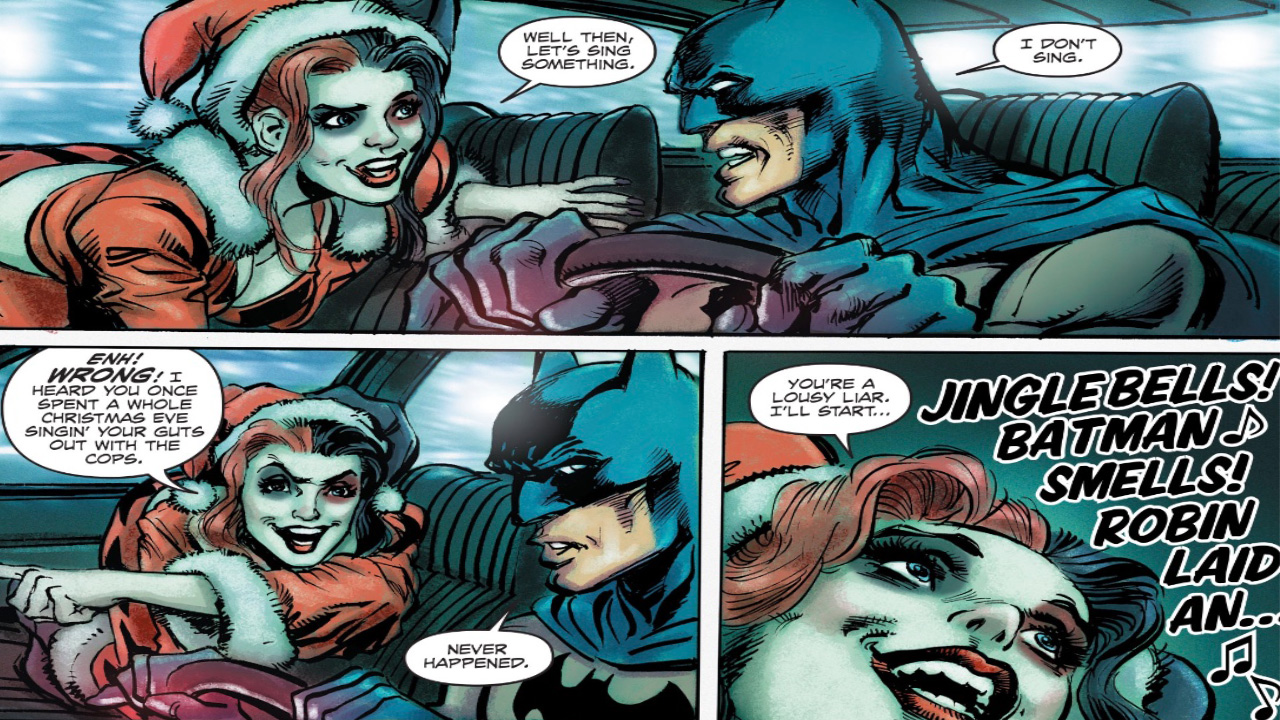 It’s Christmas Eve and Batman has caught Harley prowling Gotham. The Dark Knight takes Harley for a ride in the Batmobile and informs her that he’s dropping her off at the city limits. She insists that she only had good intentions, and tells Batman that she’s now a heroic inspiration for people around the world. Usually we wouldn’t consider Harley to be a reliable narrator, but the story cuts to various scenes of women taking charge, defending themselves from injustice, helping their friends, and emulating the more positive aspects of Harley’s eccentric personality. Harley’s influence extends to Batman, who finally breaks down and sings for her – even if it’s just one line. 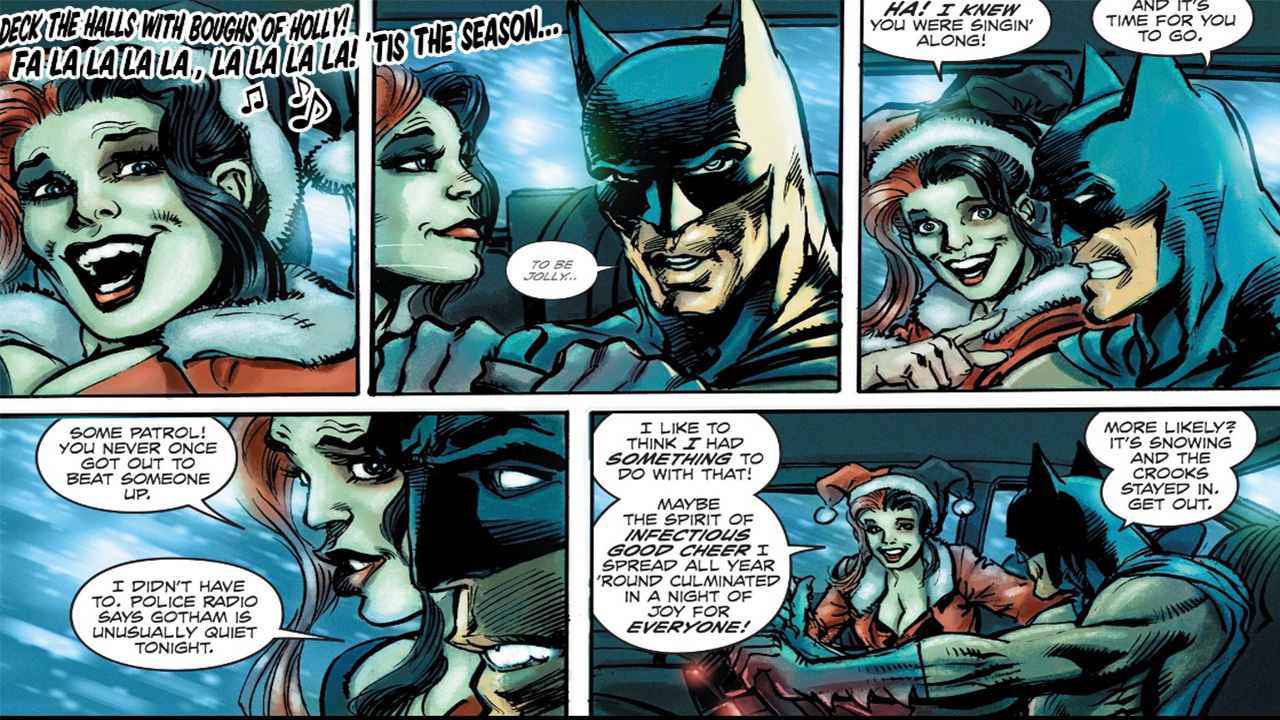 “Harley’s Not So Silent Night” is a great companion piece to “Batman’s Silent Night.” Both stories feature art by Neal Adams, one of the greatest artists to have ever worked on the Caped Crusader. His noir and moody style helped bring the Dark Knight into the Bronze Age, and evolved the Caped Crusader into a more serious character after the Silver Age zaniness of the previous era. The original story was written by Mike Friedrich, whose contributions are underrated and touching. Harley’s story was written by Paul Dini, who co-created her for Batman: The Animated Series. Between her current animated series, and upcoming feature film, the Lady of Lunacy has come far and it’s only fitting that Paul Dini’s story is a commentary on her evolution. 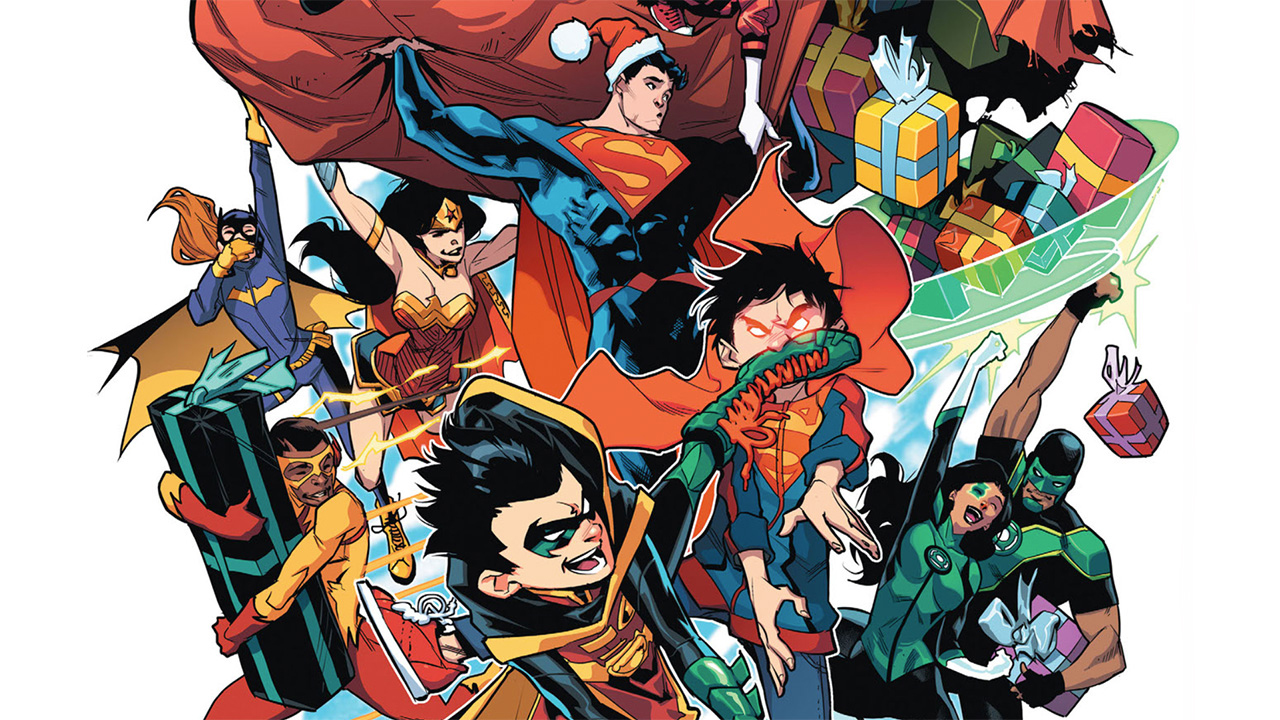 Whether you celebrate Christmas, Hanukkah, Kwanza, Festivus, or your own tradition, we hope that you enjoy your holiday season. DC Universe would be nothing without its members, which makes you the greatest gift we could ever hope for. Thank you for making us a part of your holiday, and we look forward to all the great fun ahead of us for 2020!

What Christmas Carol would you sing with Batman? Let us know in our Community!