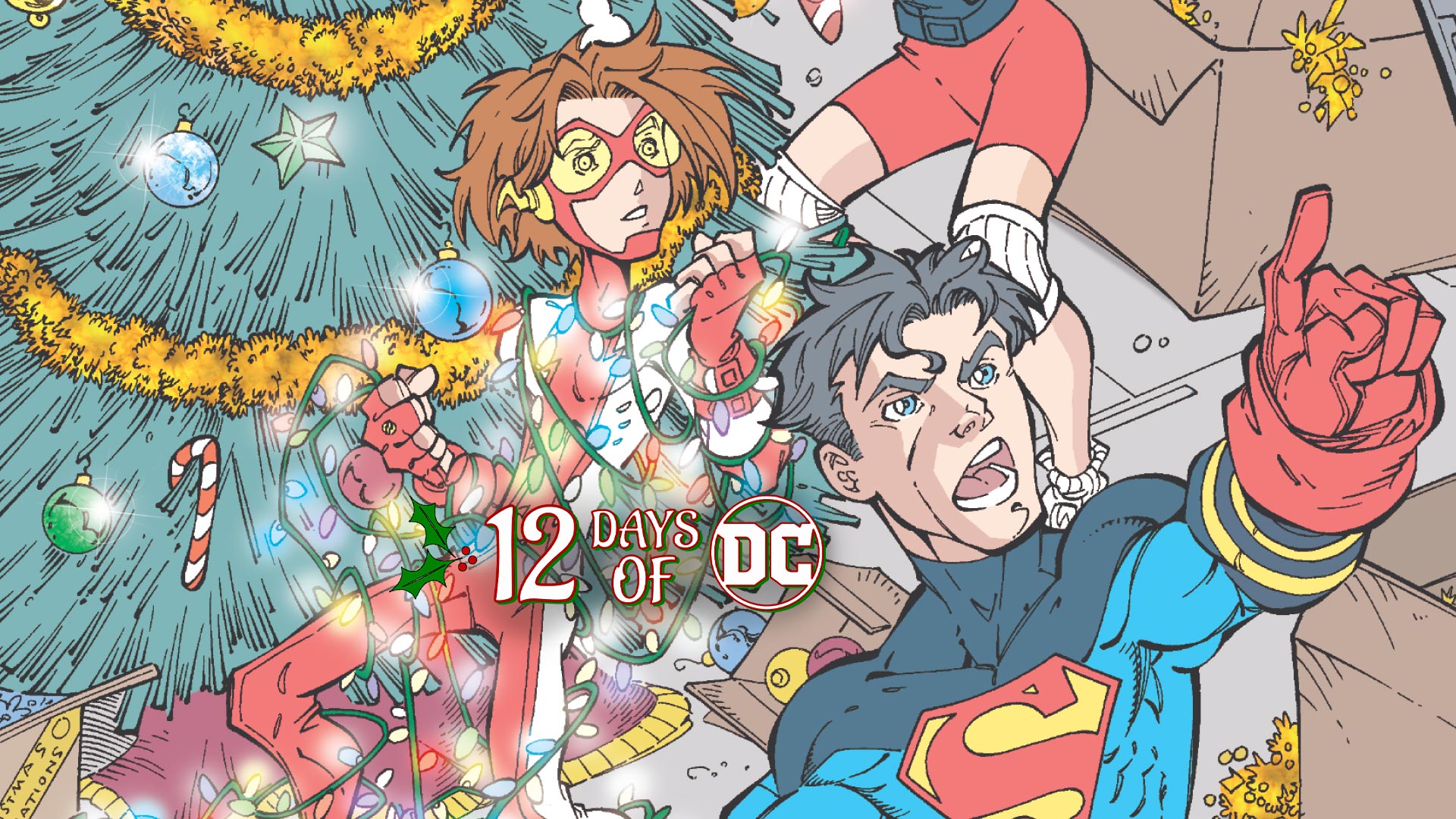 12 Days of DC: “The Night Before Doomsday”

On the second day of DC, Alfred read to me…a Young Justice story! 12 Days of DC continues, and today we’re spotlighting “The Night Before Doomsday” from Young Justice #40. It’s got everything from bowel movements to kamikaze Santas!

Years before it was a critically acclaimed animated series, Young Justice was a fun team book starring the teenage heroes of the DC Universe. The plots were mostly humorous in nature, but the book wasn’t afraid to deal with serious issues as well. One issue could deal with Impulse going up against monks and mimes (Young Justice #31), while another could tackle xenophobia (Young Justice #43). This particular story is an untold tale set early in the team’s career, before Arrowette left the group.

Instead of using traditional comic book storytelling techniques, this story is told with splash pages, and a narrative scroll in place of speech balloons. The comic is narrated by Robin, and tale is told in rhyme as a parody of the classic poem “A Visit from St. Nicholas” (more commonly known as “The Night Before Christmas”). The credits page reads “With apologies to Clement Moore…or maybe Major Henry Livingston” as a humorous reference the debate over the poem’s original author.

The story begins with Robin on the toilet, and this is probably the ONLY DC Christmas story that opens so. Arrowette had recently asked the Boy Wonder to sample her cooking, and let’s just say her culinary skills aren’t as good as her archery abilities. Somebody, probably Impulse or Superboy, has taped a sign saying “Bat-Room” on the restroom door.

The team soon learns that a homicidal alien named Mordrek is on a collision course with Earth. The brute intends to destroy the planet, even if he it means he won’t survive the impact. The team then tries to contact everyone from the Justice League to the Doom Patrol, but everyone is either off-planet or having their own Christmas party.

In a touching moment, the team decides the only way to save the planet is to collide with Mordrek themselves. They know they won’t survive the encounter, but they’re prepared to make that sacrifice. It’s great moment for a group then known best for its humor. While characters like Impulse were mostly seen as goofballs, they knew what true heroism was and were as prepared as any adult hero to lay down their lives.

But before the team’s flying Super-Cycle can reach Mordrek, Jolly Old Saint Nick himself appears in the sky. He’s on his way to deliver toys to the children of the world and….well….let’s just say he’s in the wrong place at the wrong time and when the debris clears the team no longer has to worry about colliding with Mordrek.

But it’s now up to Young Justice to save Christmas by delivering Santa’s gifts. (Didn’t we see a Tim Allen movie like this?) Even with the help of a speedster like Impulse the task still took two months, three weeks, and 5 days. The heroes told the ungrateful recipients to use FedEx next time. Remember kiddos, this was years before Amazon Prime.

There’s a lot of great gags and story beats we’ve left out, but we want you to still have some surprises when you check out the issue yourself! It’s written by Peter David, one of DC’s most underrated writers. Todd Nauck, who penciled the majority of the series, brings the characters to life with cartoony and expressive penciling and some great visual humor.

Spend your holiday with the Young Justice gang, just make sure you look both ways before flying your sleigh -- and don’t eat anything that Arrowette cooked!

What are your thoughts on the original Young Justice run? Let us know in our Community!