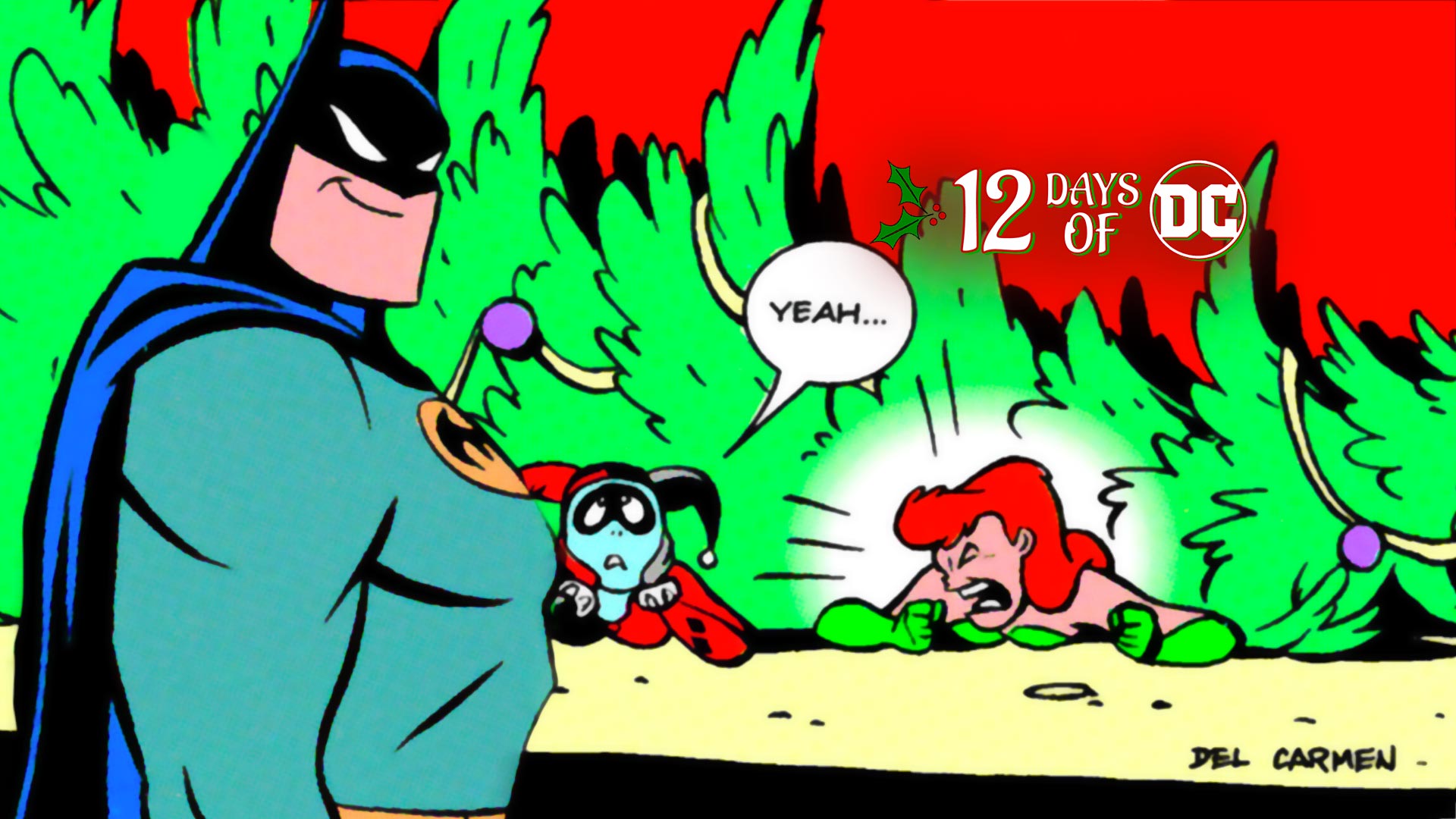 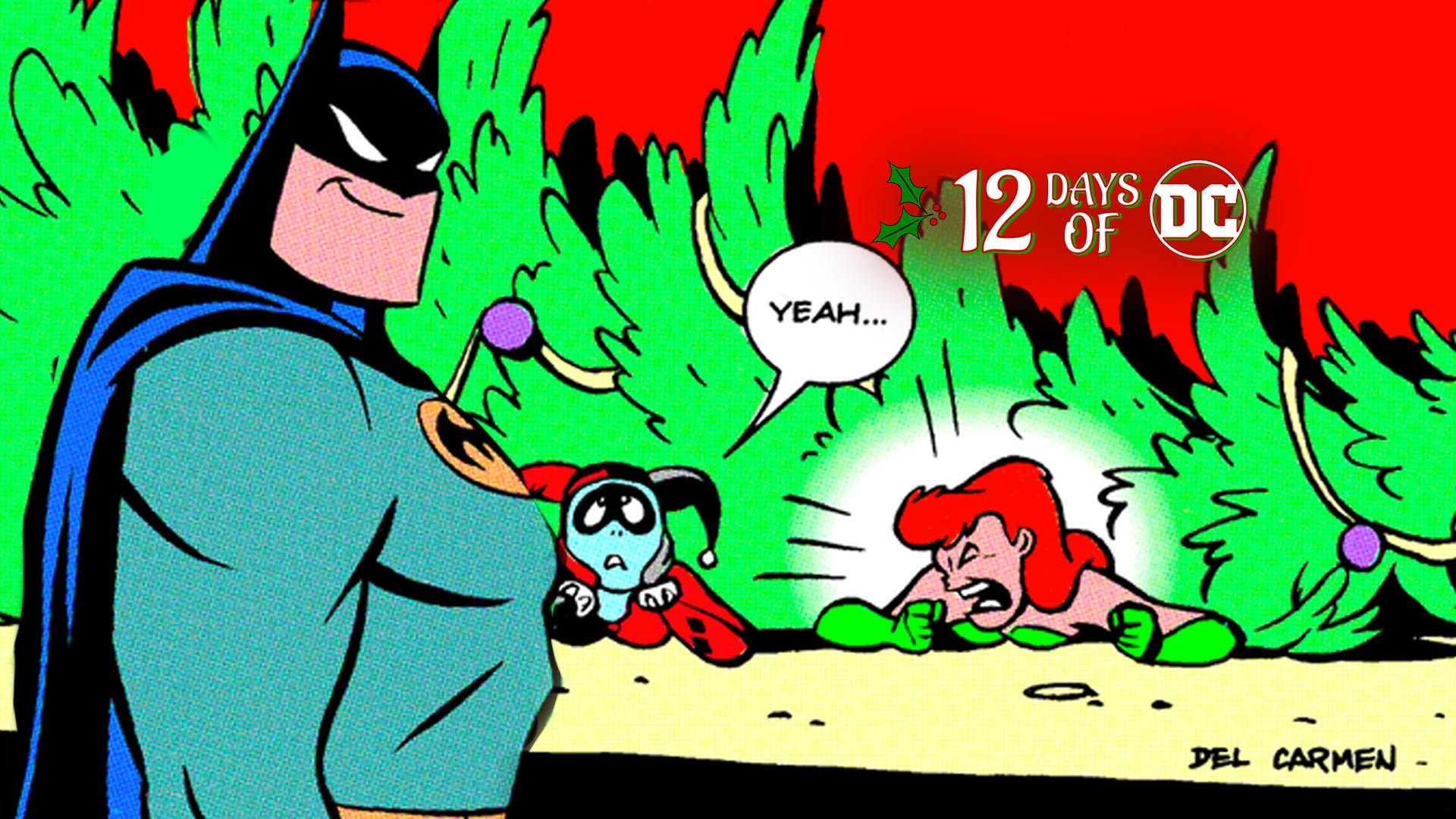 The crew behind the acclaimed Batman: the Animated Series often described their episodes as “mini movies”. In those eighty-five stories, they got around to telling a Christmas tale, but that was their introduction of the Joker, which carried double duty in terms of requirements. They would stretch their holidays muscles further in the 1995 Holiday Special of The Batman Adventures, a comic book adaptation of the animated series. As luck would have it, the stories came together so nice, they ended up telling them twice! 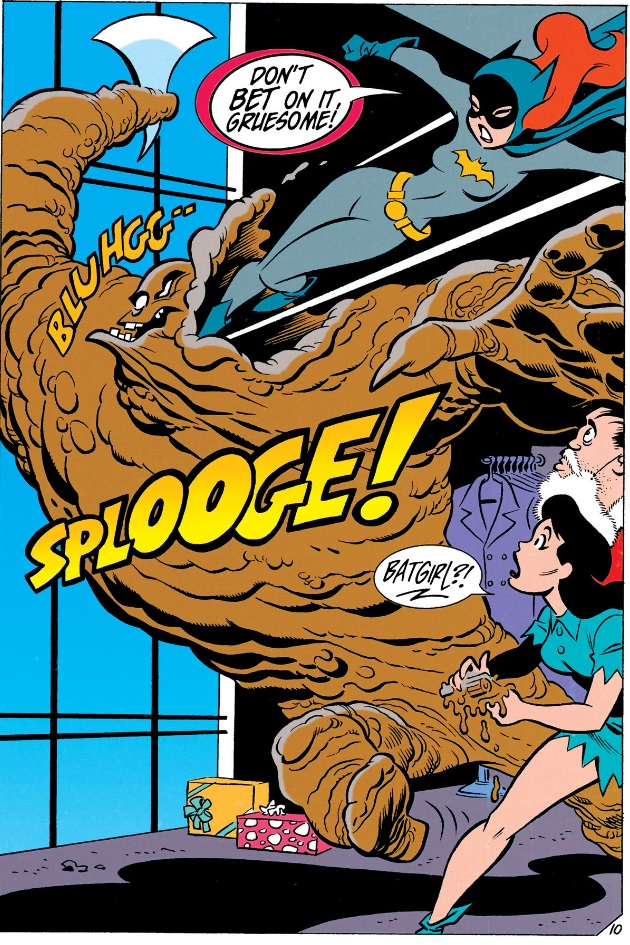 In the first story, "Jolly Ol’ St. Nicholas," it’s Christmas Eve and Barbara Gordon is shopping for her father at the mall, while Dets. Bullock and Montoya are undercover as Santa Claus and his elf, on the lookout for holiday bandits. Babs spots not one, not two, but four thieving children, who all converge and form the monstrous villain Clayface. Quickly changing into her Batgirl costume, Babs takes the fight outside and – with an assist from the detectives – shocks Clayface into submission, leaving Bullock to recover all of the stolen evidence from his muddied insides. 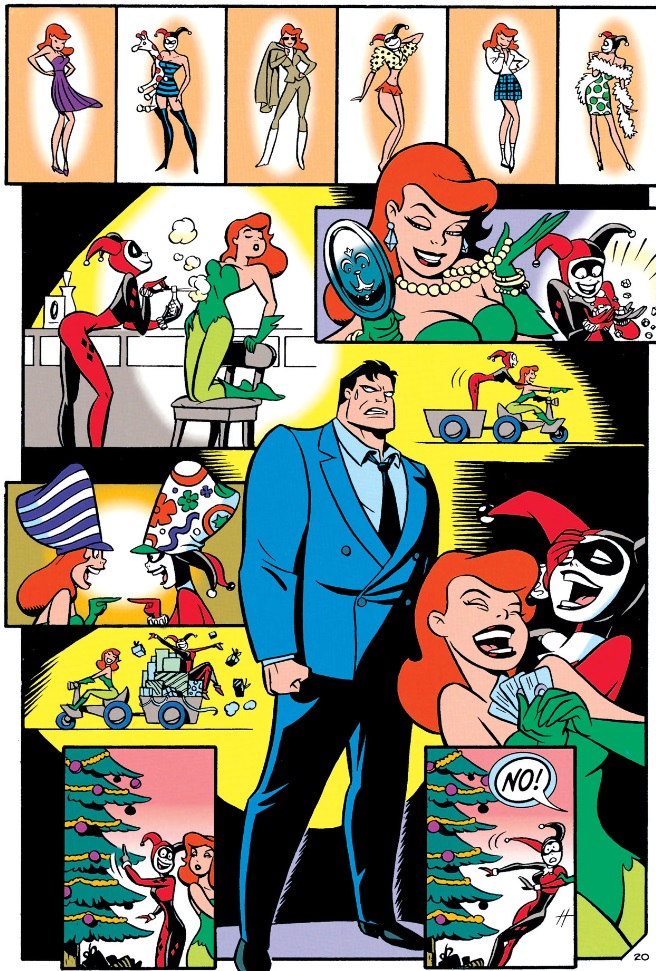 The second story, "The Harley and the Ivy," has Gotham’s Femme Fatales take control of Bruce Wayne through the power of Ivy’s lipstick and through him go on a crazed shopping spree. They hit the stores, buying dresses, hats, jewelry and are about to haul off with a piano before Bruce begins to resist the drug. He fakes an exit down an empty elevator shaft, and the ladies leave – assuming that they’ve killed him. Soon after, Batman is on their heels, and the fight is taken to a nearby toy store where he defeats the two by capturing them underneath a giant Christmas tree…which is what Harley wanted for Christmas all along. 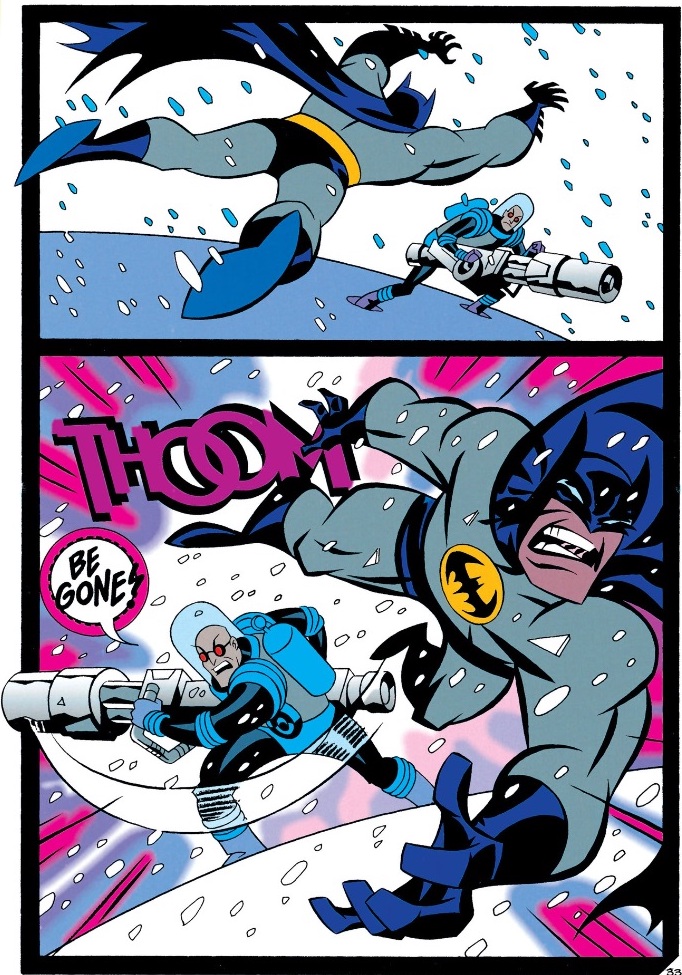 In “White Christmas,” Mr. Freeze has broken out of Arkham and thrown Gotham into a sudden snowstorm. Batman tracks him down to the cemetery, and the two engage in a brutal battle. After Batman destroys his Freeze Cannon, he asks for Freeze to surrender quietly due to the holidays. Freeze acquiesces, stating he only created the snowstorm because it was his late wife’s favorite wish to see snow during the Christmas season. 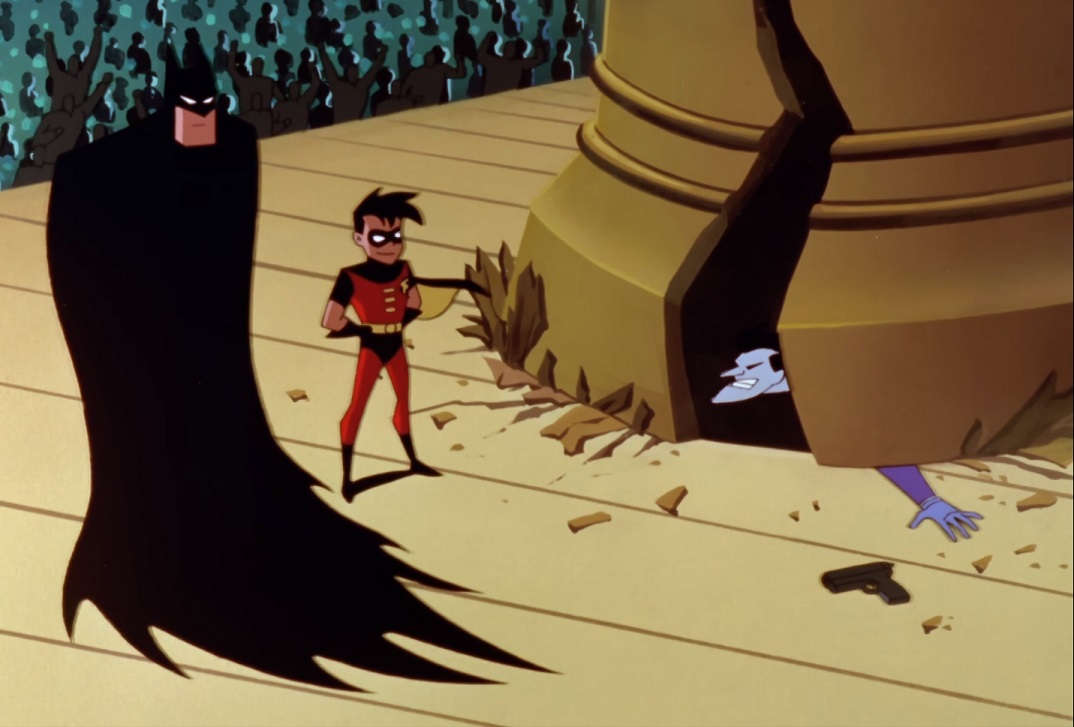 Finally, in “What Are You Doing New Year’s Eve?”, Joker has stolen a bomb and promises to set it off at midnight on New Year’s Eve. Batman tracks him down to Gotham Square, where everyone at the celebration is wearing Joker masks. A fight ensues and although Batman is shot in the arm for his troubles, he blows the counter which was set atop a giant bell which falls onto the Joker, knocking him out for the count. 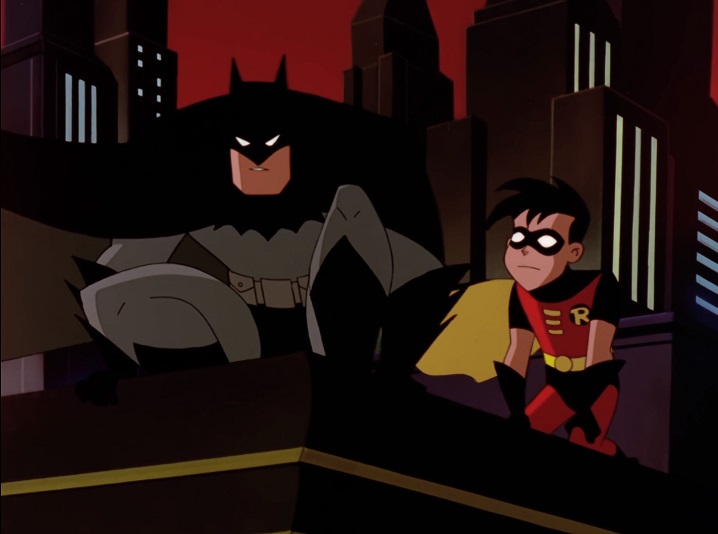 This special was released in 1995, but two years later it would be seen by many more as the introduction to the new look of Batman in The New Batman Adventures’ premiere episode “Holiday Knights.” A first for the animated series in showcasing three stories instead of one, The Harley and Ivy, Clayface and Joker stories were all faithfully adapted with minor changes, including the first on-screen appearance of Tim Drake, who had become Robin in the interim between this series and the preceding season of Batman: the Animated Series. Despite the slight changes in design, the reintroduction of classic voice actors Kevin Conroy and Mark Hamill among others showed fans that the iconic animated Batman was back, and just in time for the holidays.

What's your favorite Batman holiday tale? Talk about it in our Community!