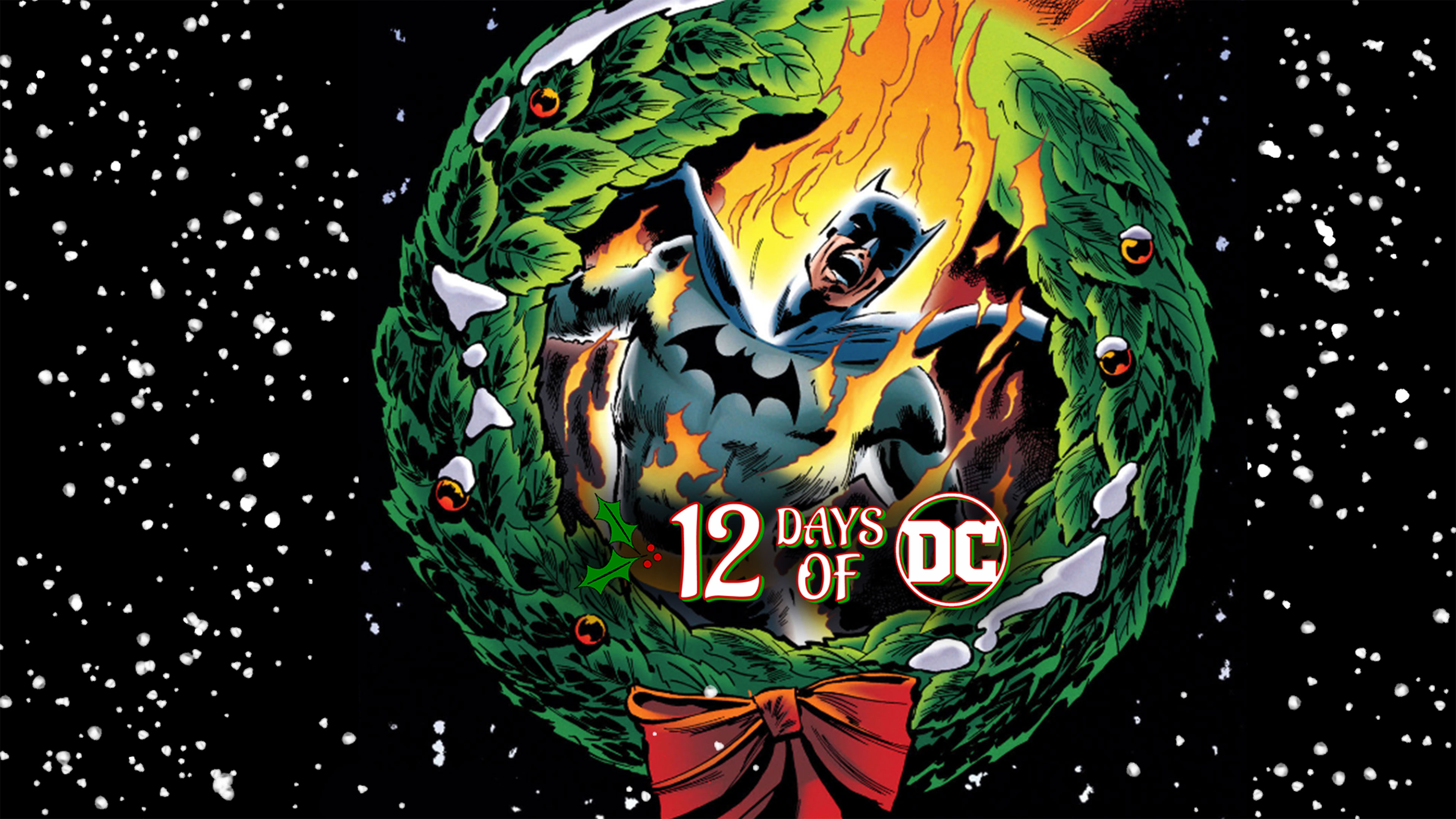 What are the Batman’s favorite things? What’s something he’d scour the city for, never resting, never pausing until he located and returned that most precious to him? And how would that search carry itself out? Batman: Legends of the Dark Knight #79 posed that question. Set around the holiday season in the early pre-Robin days of Bruce Wayne’s war on crime, the story begins with Batman already engaged in a furious pursuit of what was stolen from him, right out from Wayne Manor itself. 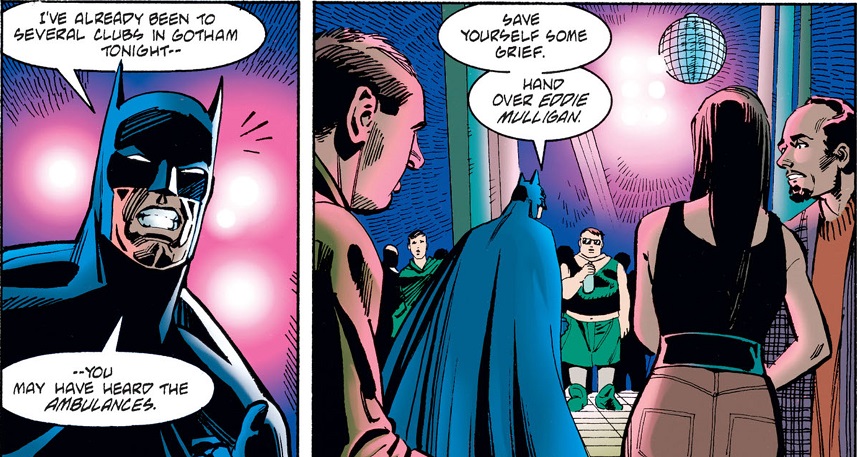 Batman's quest first takes him to a local nightclub where he accosts Eddie Mulligan, a fence for stolen goods. Batman throws him into a toilet, flushing his head while shouting what he knows about the recent uptick in high society home robberies. Mulligan swears ignorance and is left shaking on the men’s room floor. Batman's next stop is outside of a showgirl strip joint where a blind performer named Tabitha carries flowers that she tells a cabbie are from the Batman. Just then,Tabitha is attacked by Joy Boys – a teenage gang who idolize the Joker (and perhaps the inspiration for the Jokerz gang in Batman Beyond.) They’re about to assault her before Batman swoops in and quickly dispatches them. He compliments Tabitha’s beauty before kindly inquiring about the robberies. 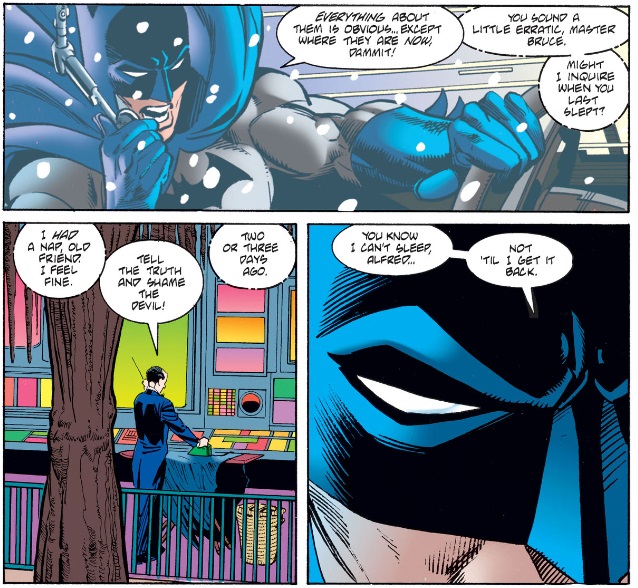 Batman learns of the Chessmen – the outfit behind the break-ins, and soon answers a call from Commissioner Gordon that an anonymous tip led the police to the Chessmen’s hideout, only for one cop to get killed and another get taken hostage. Batman makes short work of the gang, systematically taking down each “player” one by one until their “King” is left. He overwhelms the King with an onslaught of bats summoned by a trigger in his utility belt, a callback to the same gadget in Batman: Year One, and leaves the crew to be picked up by the police. 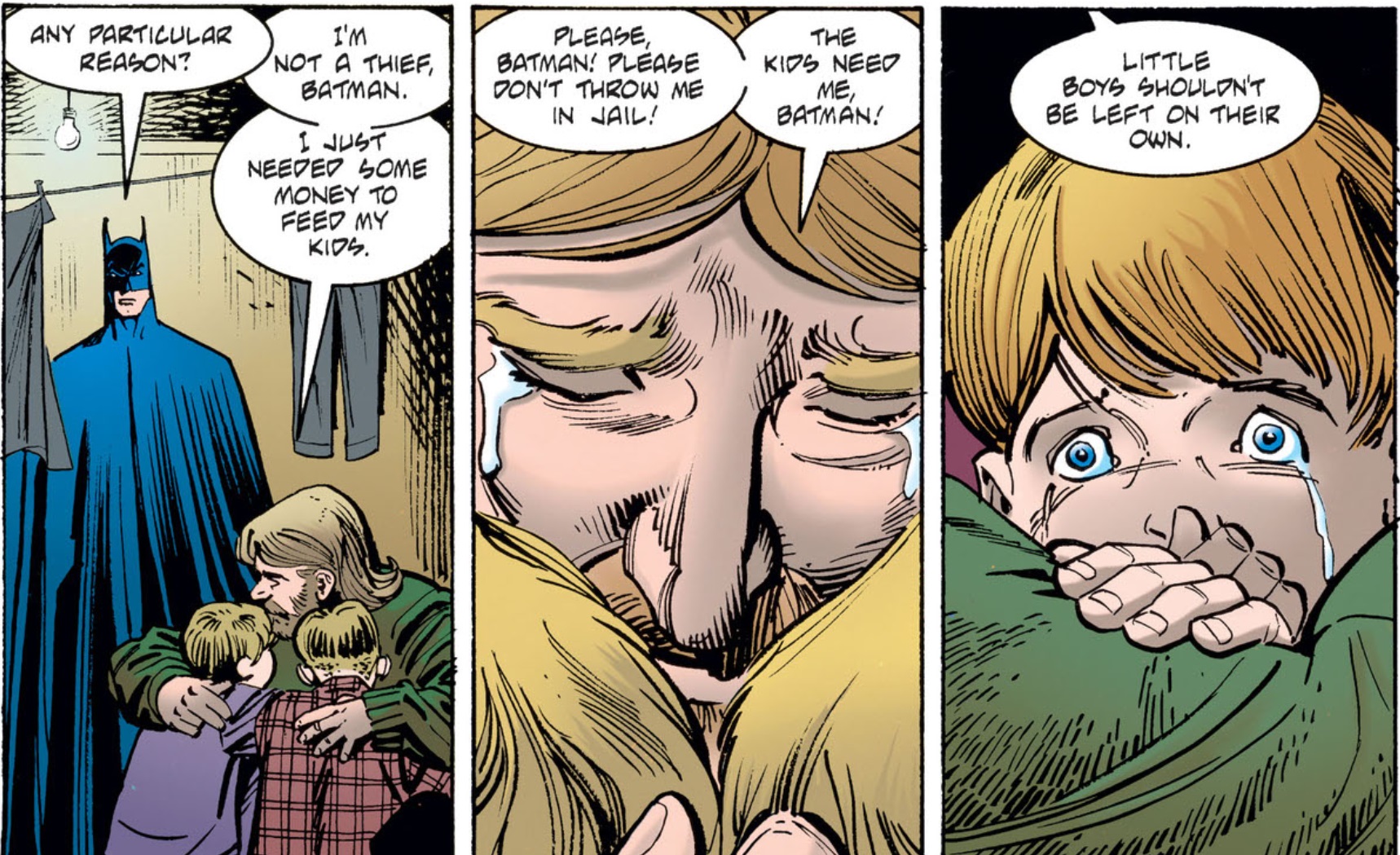 Finally, Batman tracks down the man holding the stolen goods, who is sitting expectantly in front of a window, quietly waiting while two small boys play on the floor in a small, drafty apartment. The crook admits to Batman he held the stolen property for money but says he returned them before long because they weren’t his to keep. He needed the money for his children, he explains, and softly begs Batman not to separate him from his boys, especially during the Christmas season. Batman about-faces out the door, warning the man not to do anything of the like again. When the man opens his weeping eyes he sees a roll of hundred-dollar bills freshly left on his table.

Back at Wayne Manor, an unmasked Batman sits and admires his returned treasure: a small toy train – the final gift given to him by his late parents. He frets at the notion that he almost lost the gift, but Alfred reminds him it’s now safely returned in the comfort of his old childhood room. Batman agrees and the two men go to sleep as the sun rises. 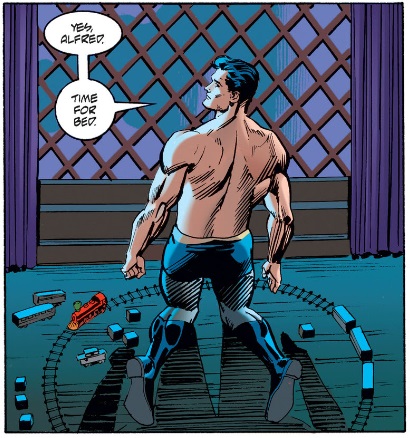 While Batman is typically presented as cool and collected in his costumed crusade, in this story his desperation, short temper, and bursts of violence speak to his childish need to hang on to every remaining keepsake his parents bestowed upon him. That the conclusion to the mystery ends with a desperate father looking out for his children is a stark wake-up call. It brings Batman’s mad passion to an end, and his emotions cooled when he contemplates what he’d been ready to do: separate a young boy from his father. It’s a somber, chilling story for the season, but keeps the spirit of giving intact by showing how Batman’s compassion fuels his determination not to have anyone go through the hardship of losing their family as he did.

What are some of your treasured Batman memories? Share them in our Community!