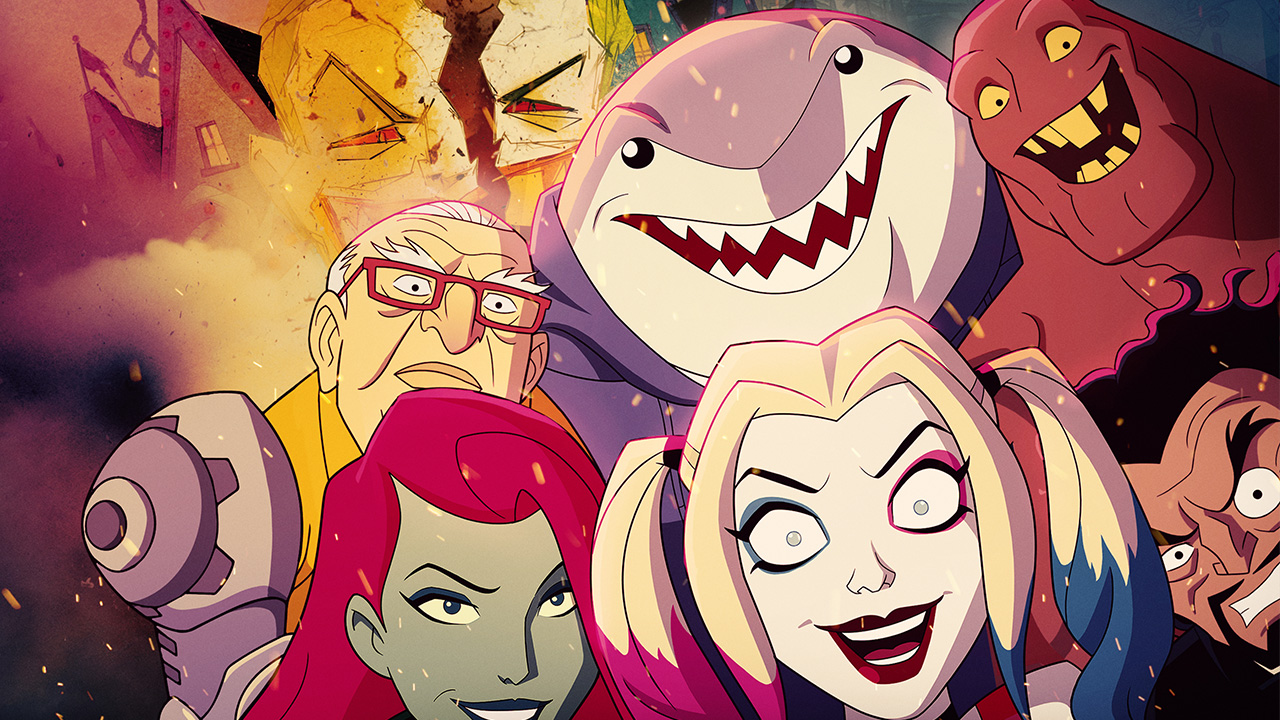 Is it April 3rd yet? The second season of DC Universe’s Harley Quinn will be dropping in a few short weeks, and we’re more excited than Clayface at a screen test. We’re counting every minute until the Lady of Lunacy and her crew return for more mayhem, and we’ve found that the best way to occupy our time is binging the first incredible season over and over again. We’ve enjoyed reliving all the f’d up moments, awkwardness, and gratuitous violence. Here are 10 moments from Harley Quinn season 1 that made us go “……..WTF.” 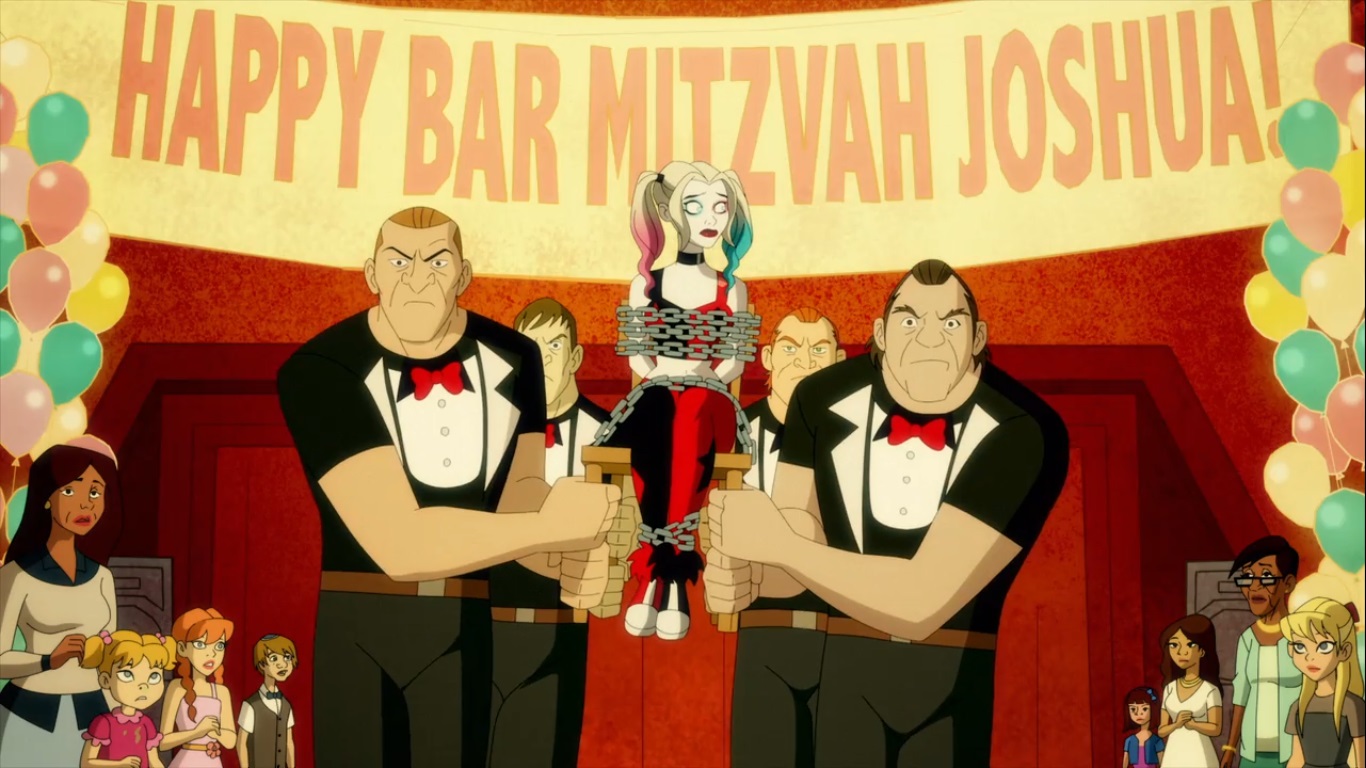 What does a newly single girl do to show her ex that she’s living the best life possible? She crashes a party his friends are attending! Of course, Harley didn’t realize the party in question was a bar mitzvah. The Penguin’s nephew Joshua had an unforgettable celebration as Harley beat up the acting trope he was supposed to fake-rob. Things got more humiliating for poor Joshua (who has an awesome name) as Harley forced the boy to admit he lied about a carnal experience at summer camp. Plus, let’s not forget the fact that Kite Man accidentally roofied a bunch of children at the party. Hell no. 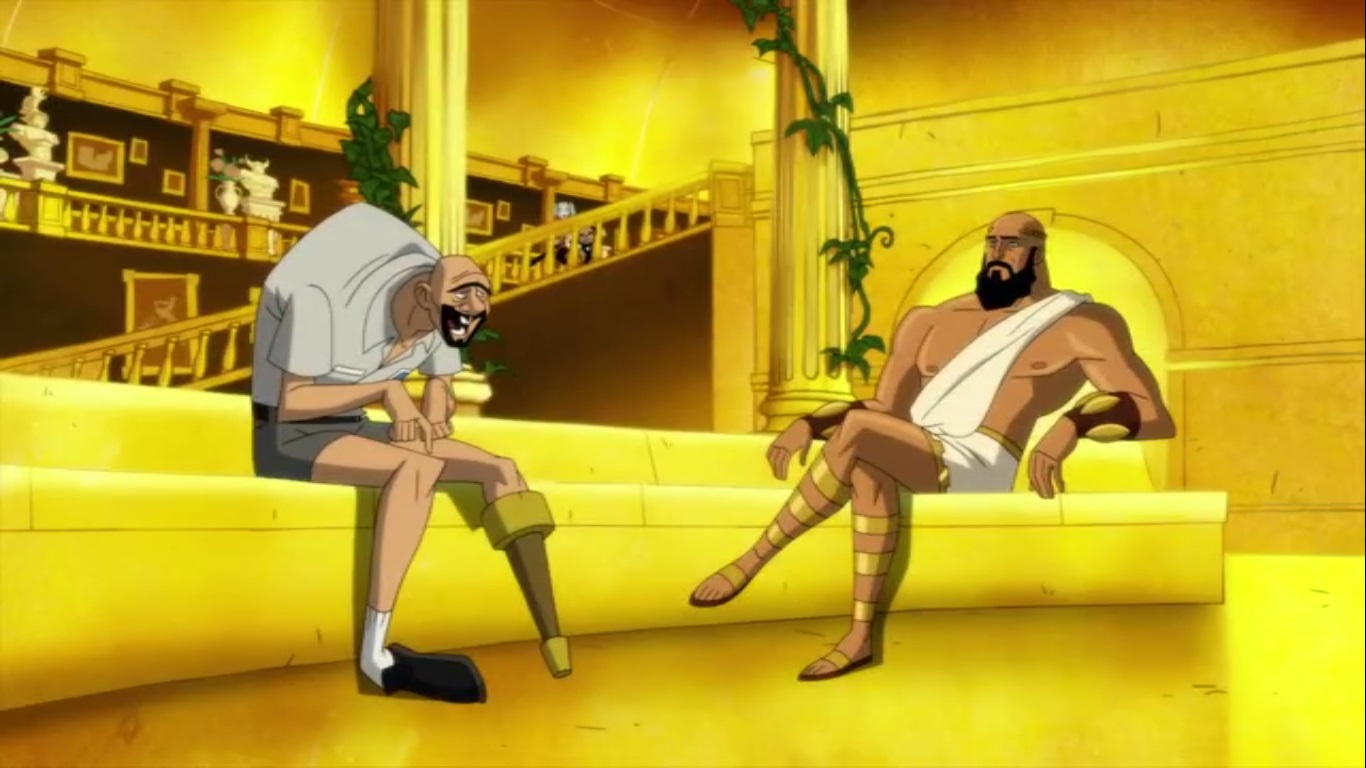 Episode: EVERY. SINGLE. EPISODE. HE. APPEARED. IN.

Remember when you were a kid and people told you to dream big? Clayface more or less lives his life by that philosophy, and fancies himself the next great actor. Anytime the shapeshifter was given a task by Harley, he would take the instructions a bit too far and would use their capers as an opportunity to polish his thespian chops. For example, when the crew robbed Maxie Zeus in the episode “So You Need a Crew” Clayface was suppose to be a simple mailman, but instead he gave the postal worker an elaborate backstory as Zeus’s long lost son….who got more deformed as the conversation went on. While Clayface’s constant overacting was a great source of embarrassment, you can’t help but admire the commitment he shows to his dream. 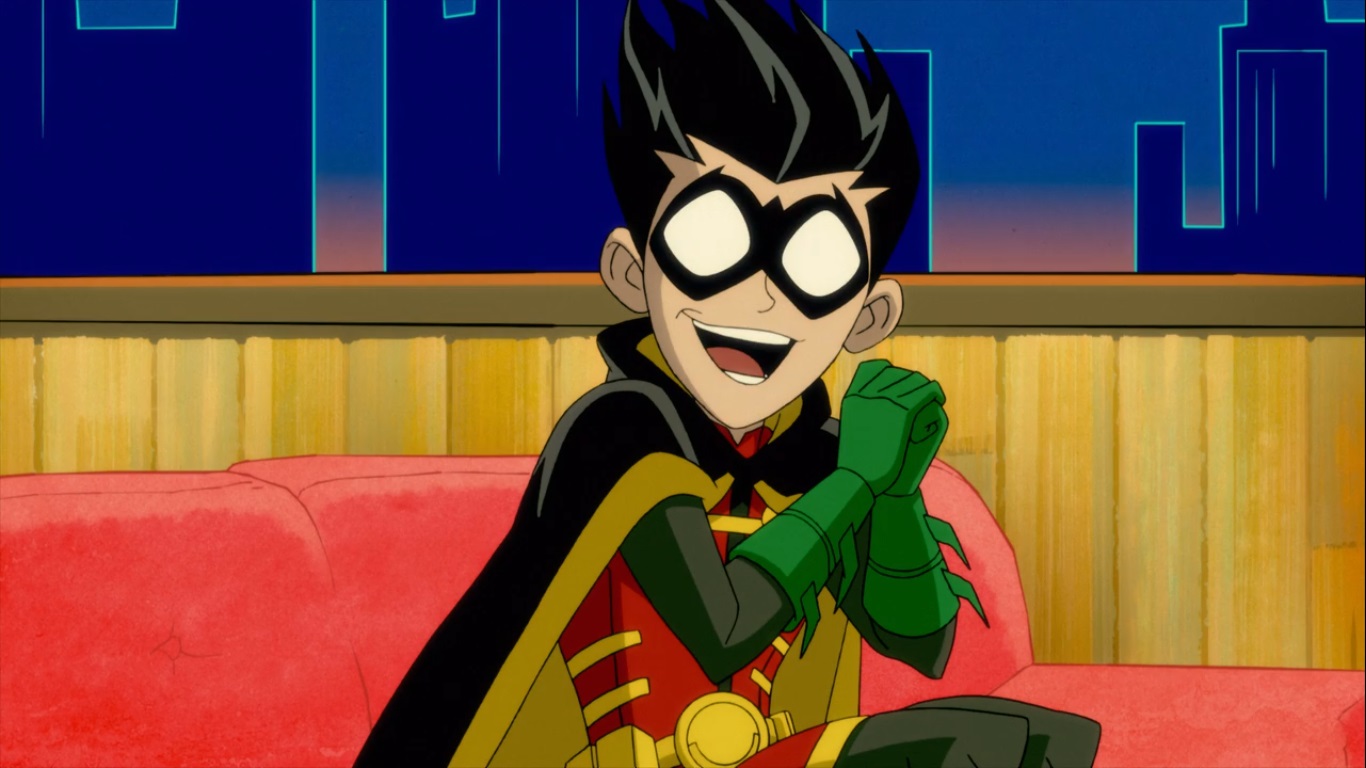 If you’ve ever read a comic book with Damian Wayne, you’d know he’s the Robin who takes himself way too seriously. He thinks he’s the toughest customer out there, and it’s probably because he was raised by the League of Assassins to be an unstoppable fighting machine. This made his appearance on the series even funnier. It was a strange sight to see Robin appear on a daytime talk show, make sweet eyes at the camera, and call himself a “sweet potato pie.” Plus, anybody who thought that the comics version of Robin needed to be taken down a peg will enjoy seeing the Boy Wonder cry and beg for his life as King Shark almost eats him. The cherry on top was his conversation with Batman, where he asked his father how old he had to be to have sex. We’ve never seen Batman disappear so fast! 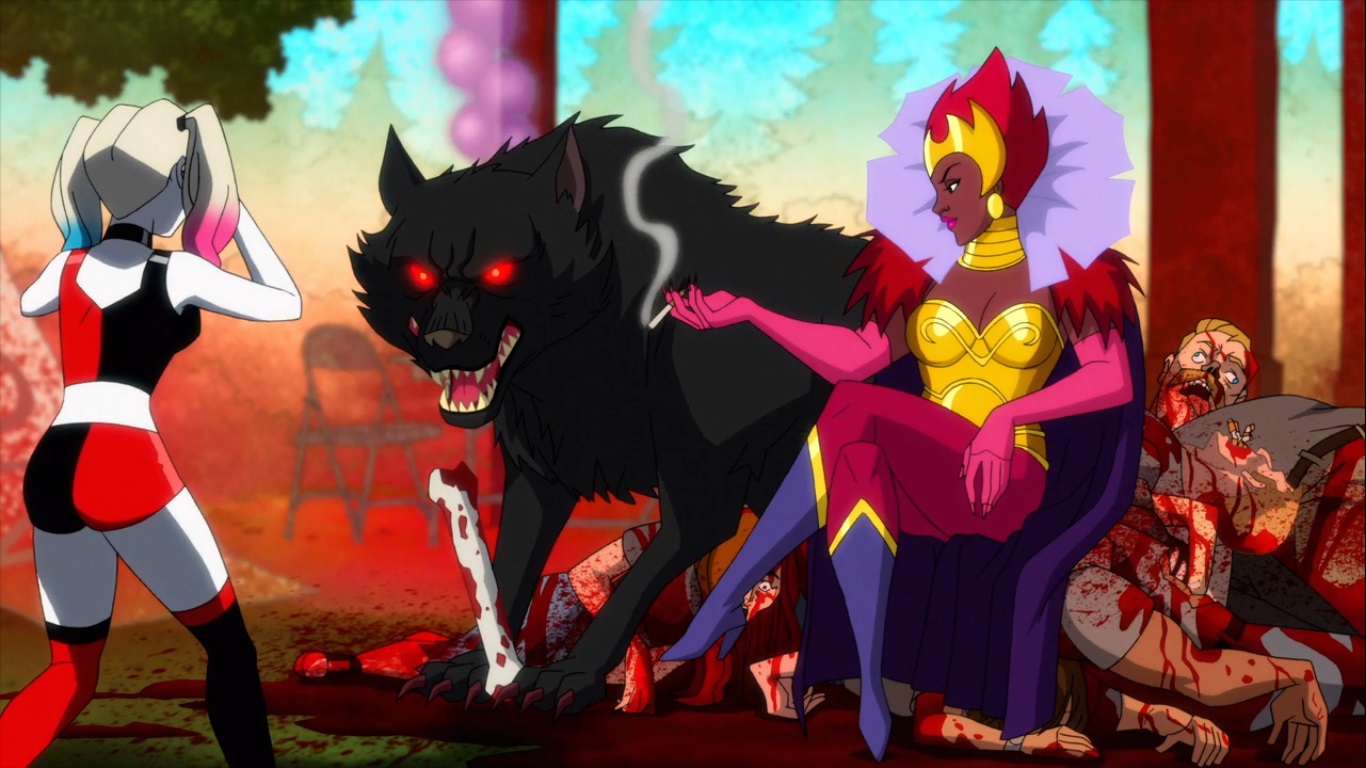 Harley learned a lot of important lessons this season, like “never take the Queen of Fables with you on any capers.” Fables had one job; distract a nearby family picnic while Harley and her crew performed the heist. When Harley returned she was horrified to see the dismembered corpses of the Praxis bloodline. Fables had sent the Big Bad Wolf to rip them apart. We can’t undersell the gore of this scene, there was blood, bones and intestines everywhere. The Queen of Fables doesn’t believe in leaving witnesses behind, and she apparently doesn’t believe in respecting the dead either, as she used the empty eye sockets of one of the corpses for an ashtray. Afterwards she had the Three Little Pigs eat up the corpses. At least she cleans up after her messes. That’s a plus, right? 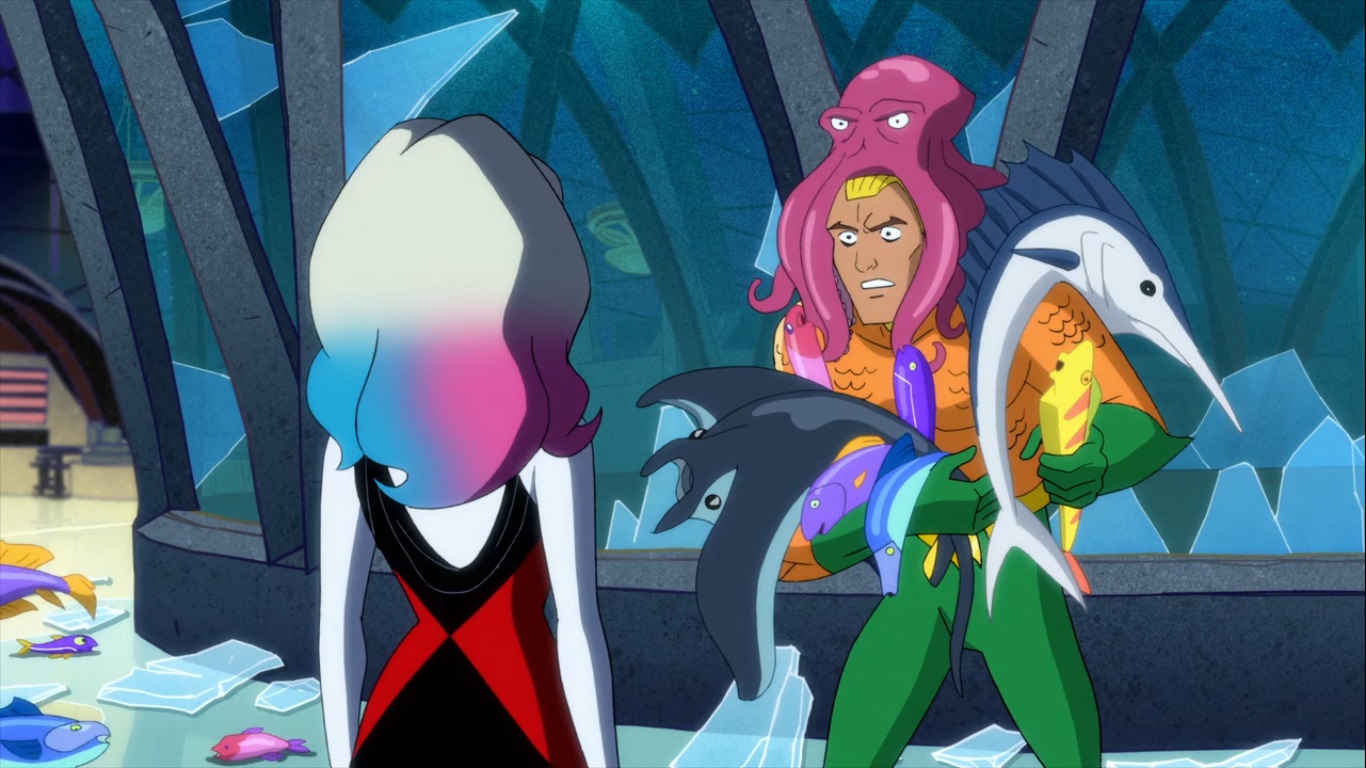 After weeks of trying to get their attention, Harley was finally invited to the Legion of Doom’s headquarters for an audition. Aquaman crashed the party, because he was a bit sore about Harley and her crew stealing his family jewels earlier in the episode. Don’t worry folks, in this case we’re talking about literal family jewels. Harley tricked Aquaman into smashing a nearby fish tank, dooming his undersea buddies. As the fish gasped for water, Bane gleefully stomped a few to death, while Aquaman panicked at the sight of his little friends dying. Tricking Aquaman into killing defenseless fish is a twisted level of evil. As messed up as this was, it was a creative way to defeat Aquaman. Why didn’t anybody think of this before? 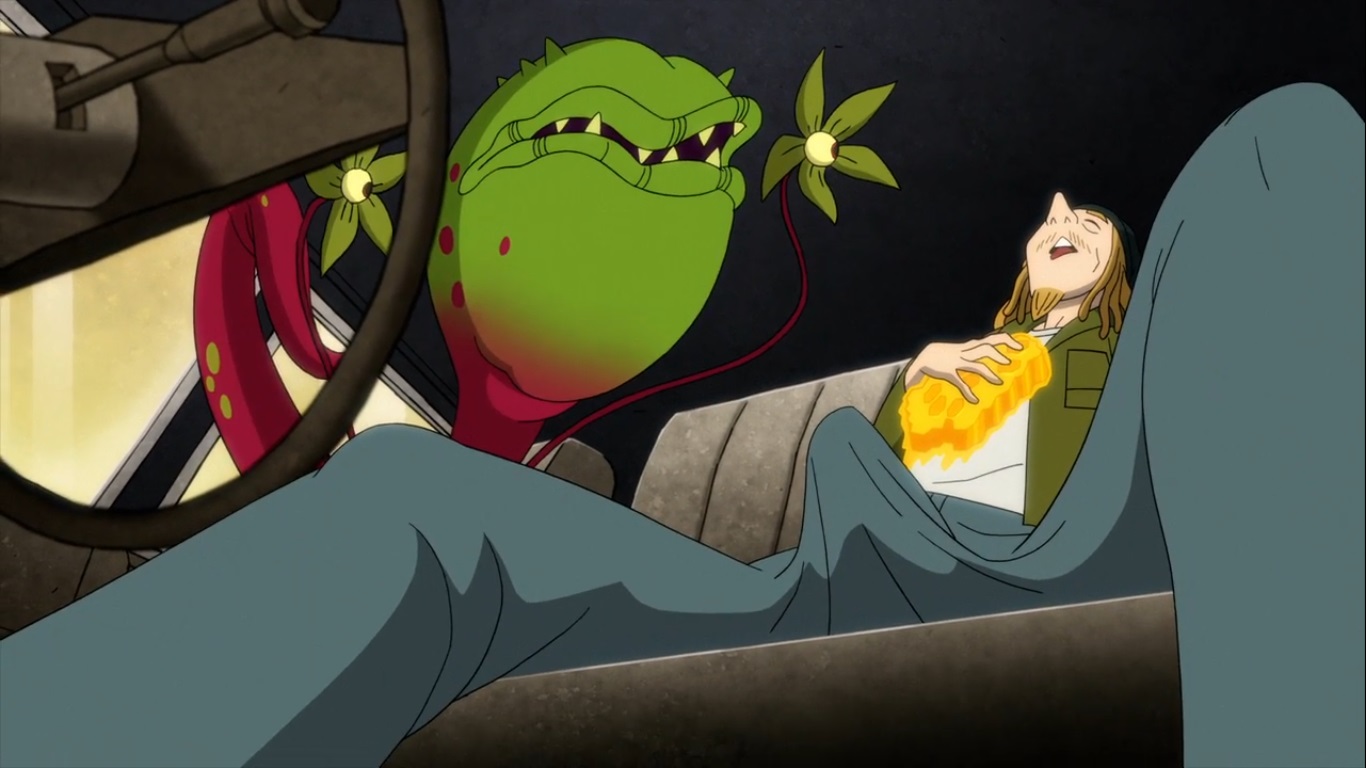 We can’t believe we’re about to type this, but do you remember the episode where Frank the Plant’s pot guy licked hallucinogenic honey, which gives a – um….pelvic salute…as you pass out? Yes, that’s something that happened, and we still can’t believe it. Usually in cases like this context makes the situation better, but not here. Frank’s “pot guy” (long story, he misunderstood an ad) decided to start dealing in hallucinogenic honey, but a deal gone wrong led to a shootout. Driving away from gun-wielding drug dealers isn’t the best time to lick your products, but has anybody on this series ever made the right decision? 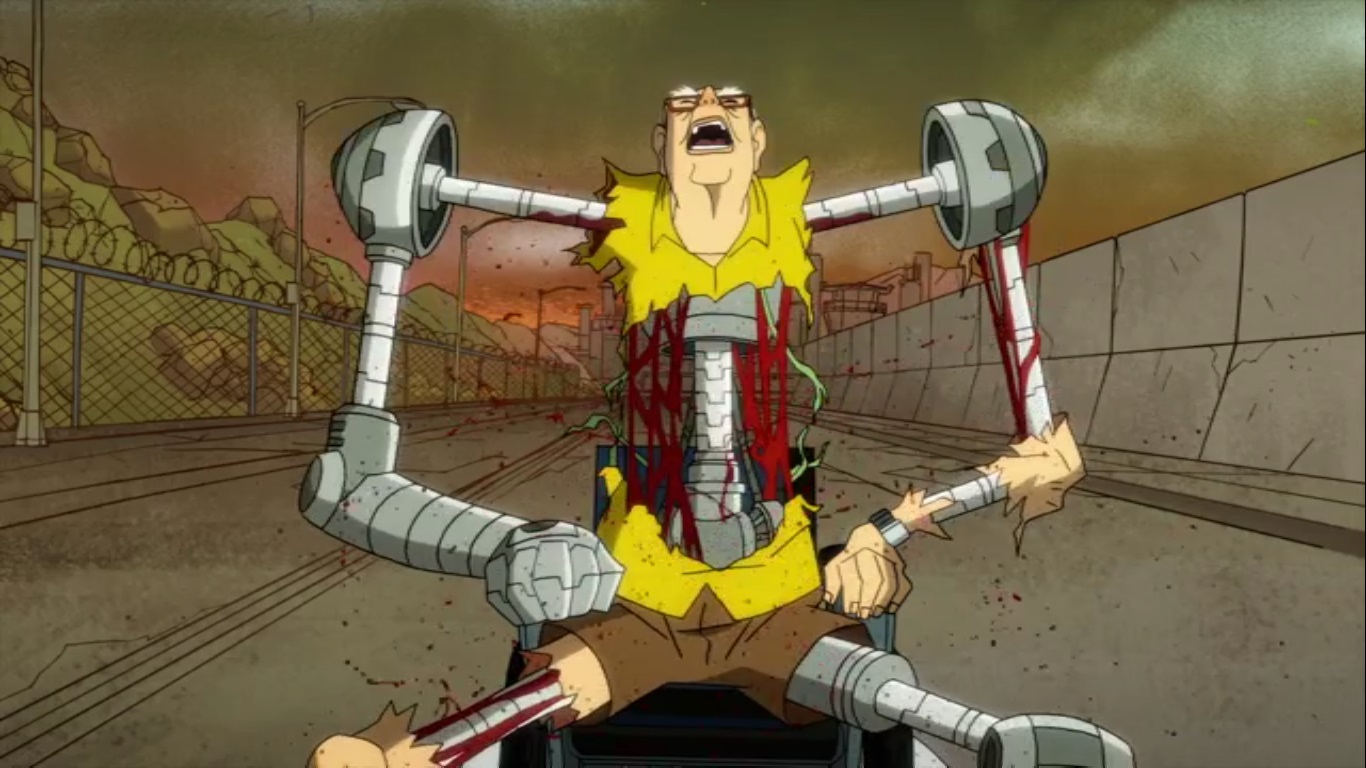 When you were a kid, did you ever dream of being a Transformer? We don’t judge you, but after seeing what Sy Borgmanwent through, you’ll be glad your childhood dream never came true. After rescuing Ivy from Scarecrow, Harley and the crew needed to catch up with the villain before he poisoned the entire city. Since their getaway car was towed, the crew was forced to literally ride Sy. Apparently the cyborg ex-spy had been experimented on years ago, and he had the ability to change into a car, which sounds cool in theory until you consider what that would be like. Imagine what it would feel like if the bones in your body separated, rearranged themselves, and expanded. Sy’s body was being ripped apart before his eyes, and judging from his painful groans, it probably didn’t feel good. The entire experience was horrifying to watch, and will probably make most of us feel a little more sympathy the next time we spot Optimus Prime.

A HARLEY IN WOLF CLOTHING 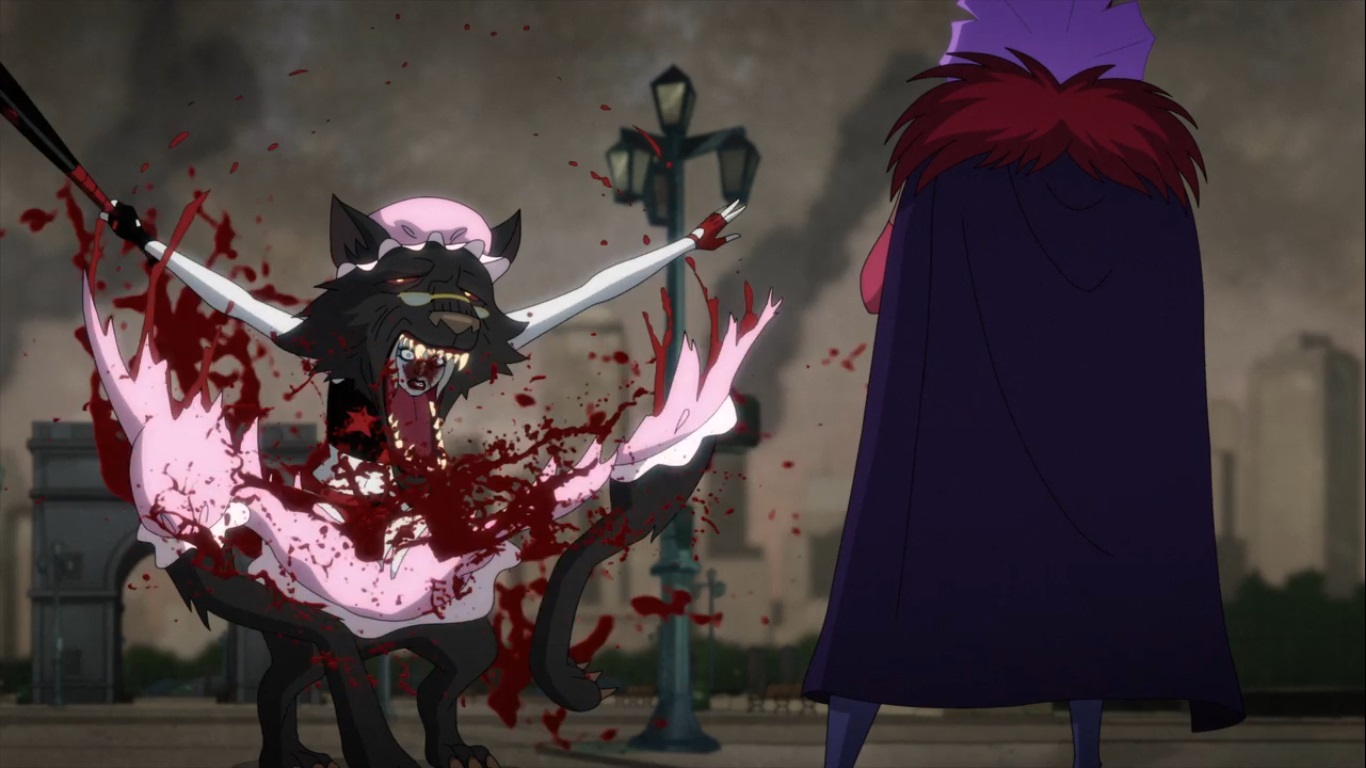 What does Harley Quinn do to her enemies? She wears their dead hollowed our carcass as a suit to surprise her other enemies. That’s Harley Quinn style. In the episode “Devil’s Snare”  Harley and the crew were being chased by the Big Bad Wolf, but King Shark was able to overcome the beast. The Lady of Lunacy decided she would surprise the Queen of Fables by wearing the dead body before ripping it open to reveal herself. That was a pretty sick moment, which even impressed the Queen of Fables – right before Harley knocked her head off with a baseball bat. 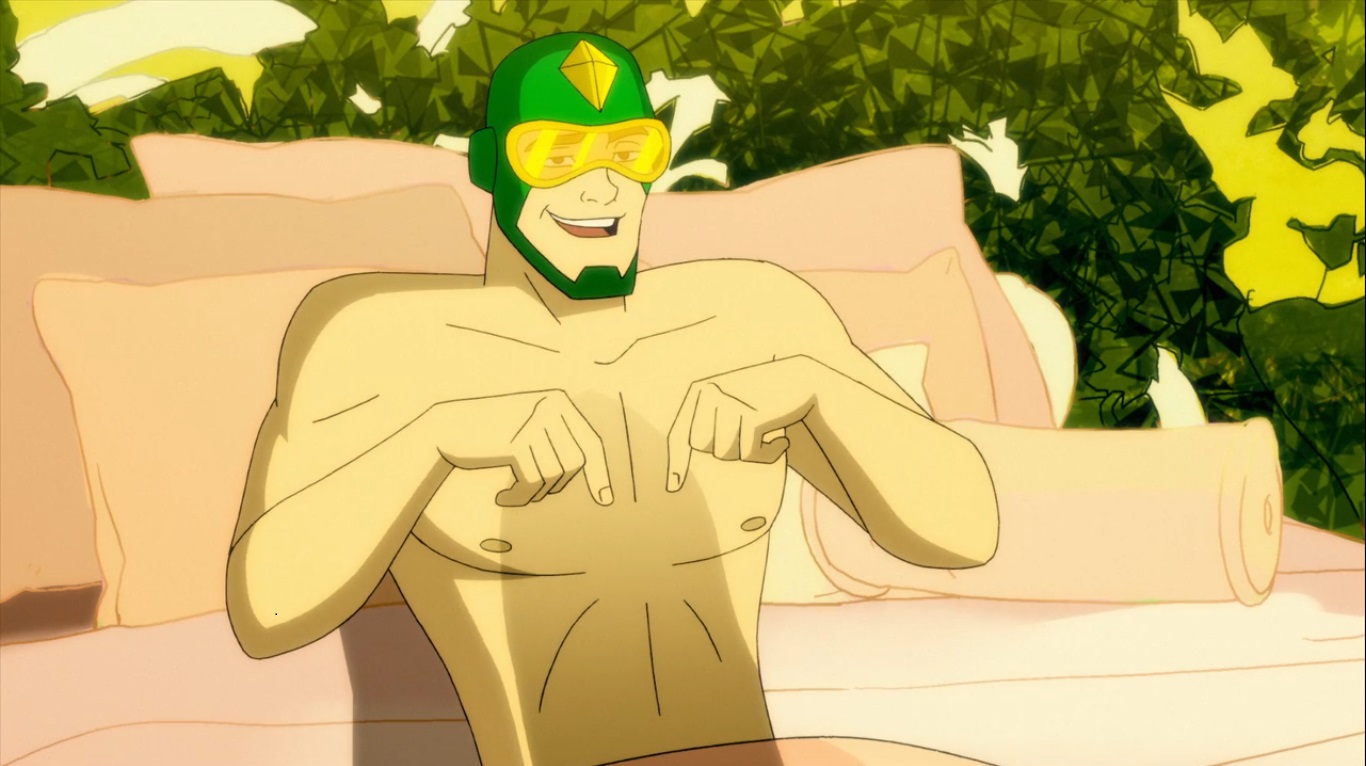 Episode: Where to begin?

The D-lister Kite Man had so many odd moments throughout the season, that it’s hard to pick just one. He misread the signals during his first meeting with Ivy and took off all his clothes (“A High Bar”). When we say “misread the signals” what we really mean is there were no signals in the first place, but that didn’t stop Kite Man. In the episode “Devil’s Snare” he proposed to Ivy, even though all signs were telling him to stop. It was like watching a car crash, except the car is going 3 miles per hour and has plenty of time to avoid the collision, but crashes anyway. Then the car explodes. That’s what dating Kite Man is like. Hell yeah. 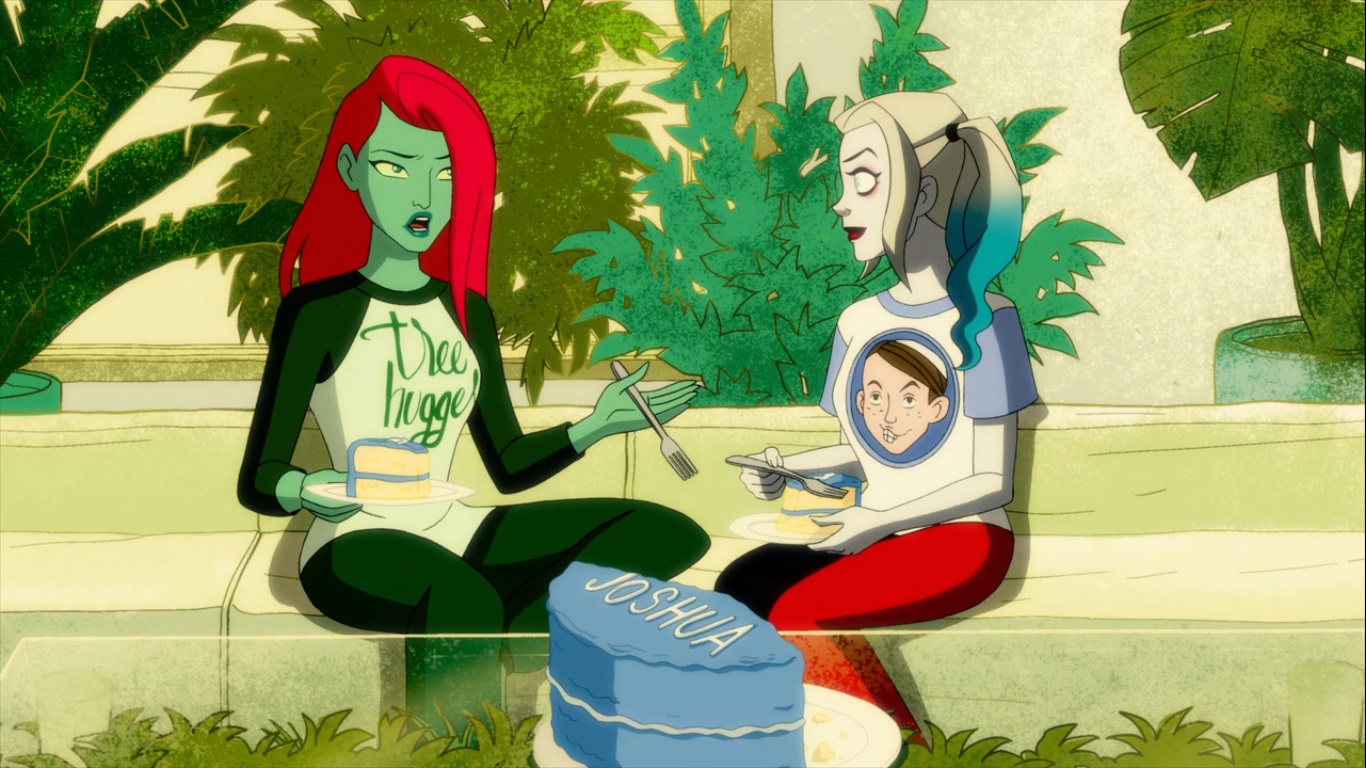 The Episode: The entire series, and we loved every moment of it.

Some of the most f’d up stuff that’s happened on the show has been events that occurred offscreen. Sometimes a character will make an offhand remark about something that happened without the audience present, and it’s usually something shocking. The next time you binge Harley Quinn season 1, pay attention to these jokes, because they come at you fast. For example, in the episode “Being Harley Quinn” Clayface implies that he killed famous movie dog Air Bud. In the episode “So You Need a Crew” a gingerbread boy talks about turning tricks on the street corner. The most messed up one was in “The Final Joke” where Joker telling Scarecrow about how he and Harley once ate Sushi off of Jim Gordon’s naked body. Truth be told, it’s probably for the best that we didn’t see that one.

What were your favorite moments from HARLEY QUINN season one? Let us know in our Community!