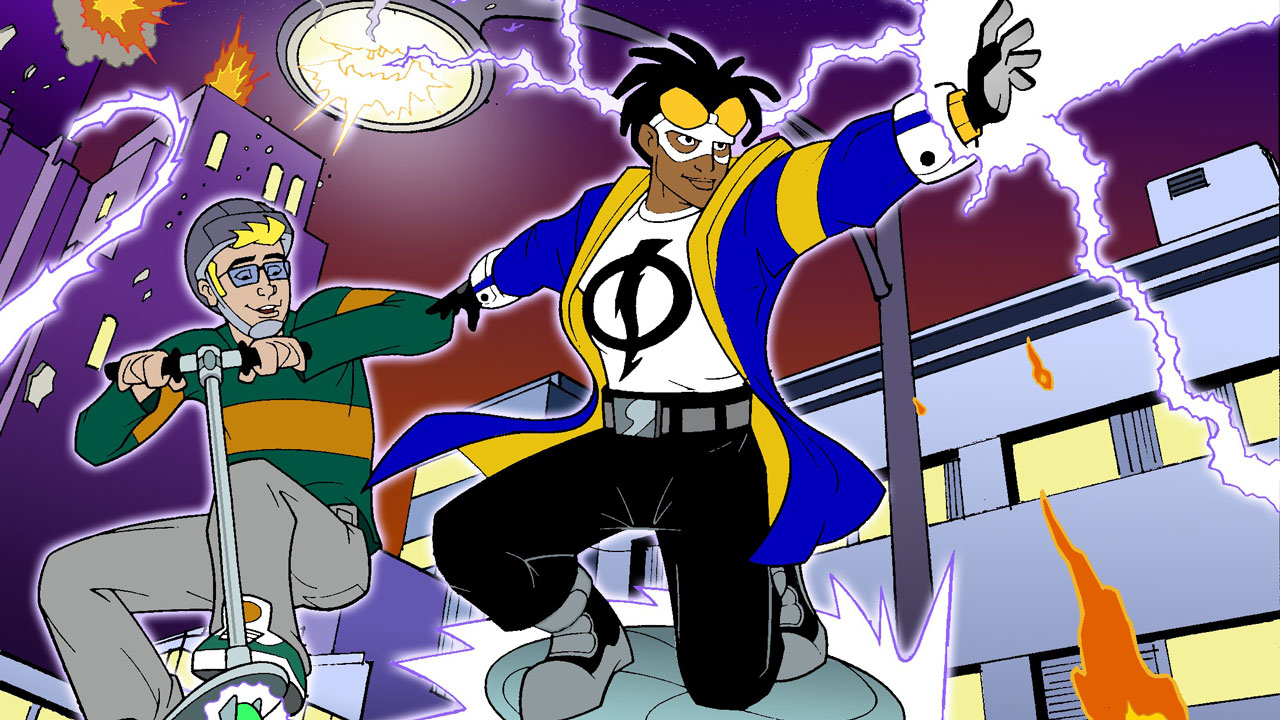 In the year 2000, the DC superhero Static made his way to the Kids WB Saturday morning lineup, electrifying audiences with 52 episodes that ran over the course of four seasons. Based on the Milestone Comics series, Static Shock (every episode of which is available to view on DC Univese) was a show that balanced all the light-hearted fun of being a teenage superhero with the serious problems that face today’s youth. Its episodes dealt with racism, bullying, gun violence, and more. Along the way, Static was even visited by a few of the DC Universe’s other iconic heroes. While there are many great episodes to choose from, here are some of the highlights…

Shock to the System

The first episode of the series features the “Big Bang” which gave Virgil and many of his rogues their powers. In addition to presenting an entertaining superhero origin tale, the episode does a great job of showing the trials and tribulations of an American teenager. Virgil is forced to dodge bullies at his high school, while facing peer pressure to join a gang. The episode is a great introduction to Static, and a preview of what viewers can expect from his electrifying series.

Sons of the Father

When Virgil wonders why his best friend Richie never invites him over to his house, Static’s buddy apprehensively invites him for a sleepover. During his time at Richie’s house, Virgil discovers that his friend’s father is a racist, quickly causing the night to get uncomfortable. Embarrassed by his father, Richie runs away from home and finds himself captured by super-villains. Richie’s father must overcome his racism and work with Virgil’s father Robert. This is a great episode of the series that opens up a dialogue about racism in a very emotional way.

When Mark Hamill’s Joker comes to Dakota, Kevin Conroy’s Batman isn’t far behind! Static has the first of his several team-ups with the Caped Crusader, bringing Virgil into the greater DC Animated Universe. The Joker is just as fun and dangerous as ever, injecting his own brand of comical mayhem into the show. Static struggles to live up to the Dark Knight’s standards, hoping to impress the elder hero -- and he winds up doing a great job. This is a must-watch episode for all Batfans.

While the series was known for dealing with serious topics, it also had its fair share of fun episodes. Like this one featuring NBA superstar Shaquille O’Neal (who'd already portrayed the DC Super Hero Steel in the hero's 1997 live-action film debut). Static gets to live every fanboy’s dream when Shaq visits Dakota and all the basketball star wants to do is hangout with Virgil and Richie. Although some super-villains get in the way of their fun, Shaq manages to impart some life lessons onto Static, including some tips about leading a successful double life. Seeing Shaq fight villains alongside Static is one of the most unforgettable sights of the entire series.

Virgil and his sister Sharon experience mixed feelings when their widower father Robert begins dating again. To make matters worse, Robert’s new girlfriend is a cop and she suspects Virgil is involved in the theft of a formula that has the potential to recreate the Big Bang. The superhero show quickly becomes a family drama as everyone is at odds with one another, forcing Virgil and Sharon to put aside their feelings so their father can be happy again. One of the greatest things about the series was how real the family drama was, and this episode is one of the best examples.

This episode focuses on Virgil’s classmate Jimmy, a boy who faces daily harassment from the school bullies. Virgil is horrified to find a manifesto which reveals Jimmy’s sinister plans to get revenge on the bullies with his father’s gun. The episode is told through a framing sequence where Virgil recounts the events to a school counselor. Although the episode was produced almost twenty years ago, the issues it addresses are, sadly, every bit as relevant today.

When a bigshot producer offers to make a reality show centered around Static, fame goes to his head and his crime-fighting is affected. Static’s partner Gear tries to bring his friend down to Earth, but the allure of the cameras can be a tough distraction. The episode is a fun look at reality tv, while focusing on the friendship between Richie and Virgil.

Static and Gear meet a new “Bang Baby” named Time-Zone, who has the power to time travel. Virgil, who is still grieving for his late mother, asks Time-Zone to take him 5 years into the past so he can have the chance to save her. The heroes travel back to the Dakota riots, where Virgil hopes to get his mom safely off the streets before a stray bullet claims her life. The episode features an emotional reunion between Virgil and his mother, and a bittersweet ending that will move fans to tears.

A time-travel mishap places Static 40 years into the future where he finds himself in the world of Batman Beyond! Static teams up with Terry McGinnis, who has little patience for the teenage hero as the duo work their way through the Gotham of tomorrow hoping to save Virgil’s future self. Batman Beyond fans get to see their favorite characters again, and Static Shock fans get a hint at the heroic future that’s in store for Virgil.

There's trouble in Dakota, and all signs point to Green Lantern John Stewart turning to crime. Static couldn’t be more devastated, having long idolized the Justice League star. Seeing his crime spree makes Virgil question everything he knows about heroism and idols. Angry about the betrayal, Static goes after his former idol hoping to bring him in once and for all, but is there more to the story? On the surface this is a great Green Lantern team-up episode, but beneath it’s a great story about what happens when idols don’t live up to the pedestal we put them on.

What are your favorite episodes of Static Shock? Let us know in our Community!