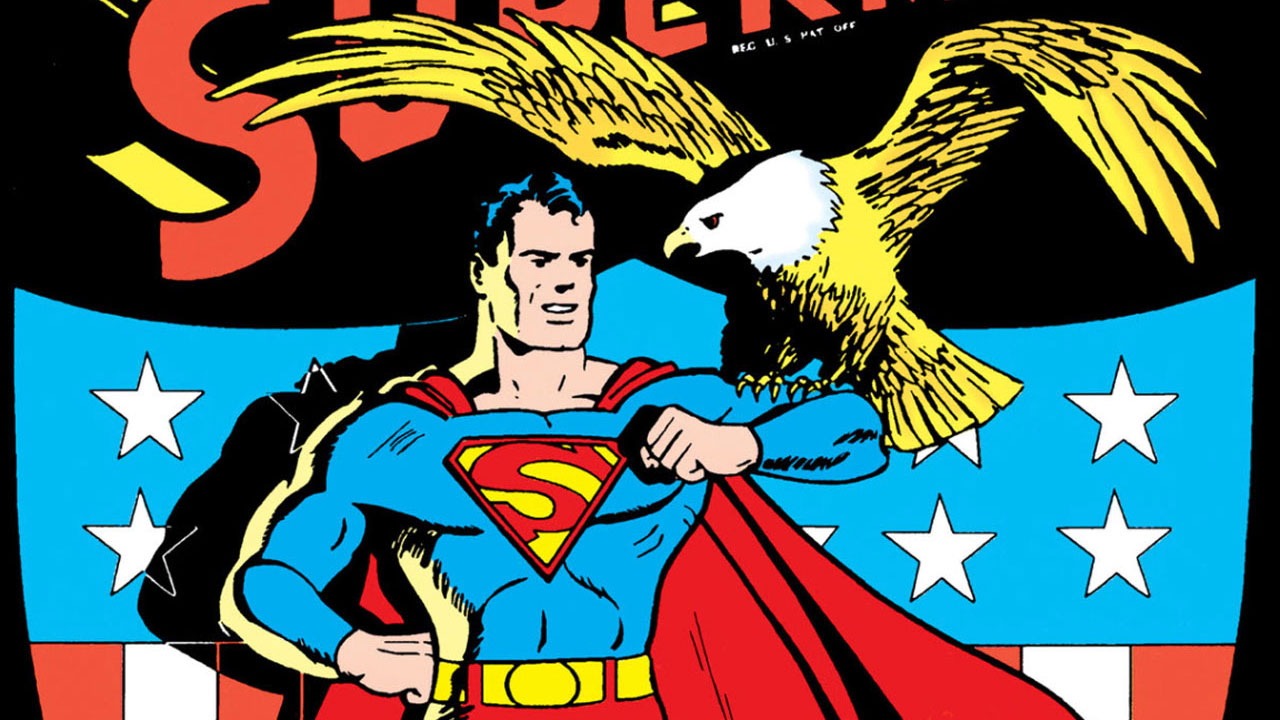 The 10 Most Patriotic DC Comics Covers Ever

Whether you’re talking the Justice League of America, the Star-Spangled Kid, or truth, justice, and the American way, the American ideals of independence and individuality have always been a guiding light for the DC Universe. This 4th of July weekend, let’s take a look at some of the best comic book covers to pay tribute to our nation. 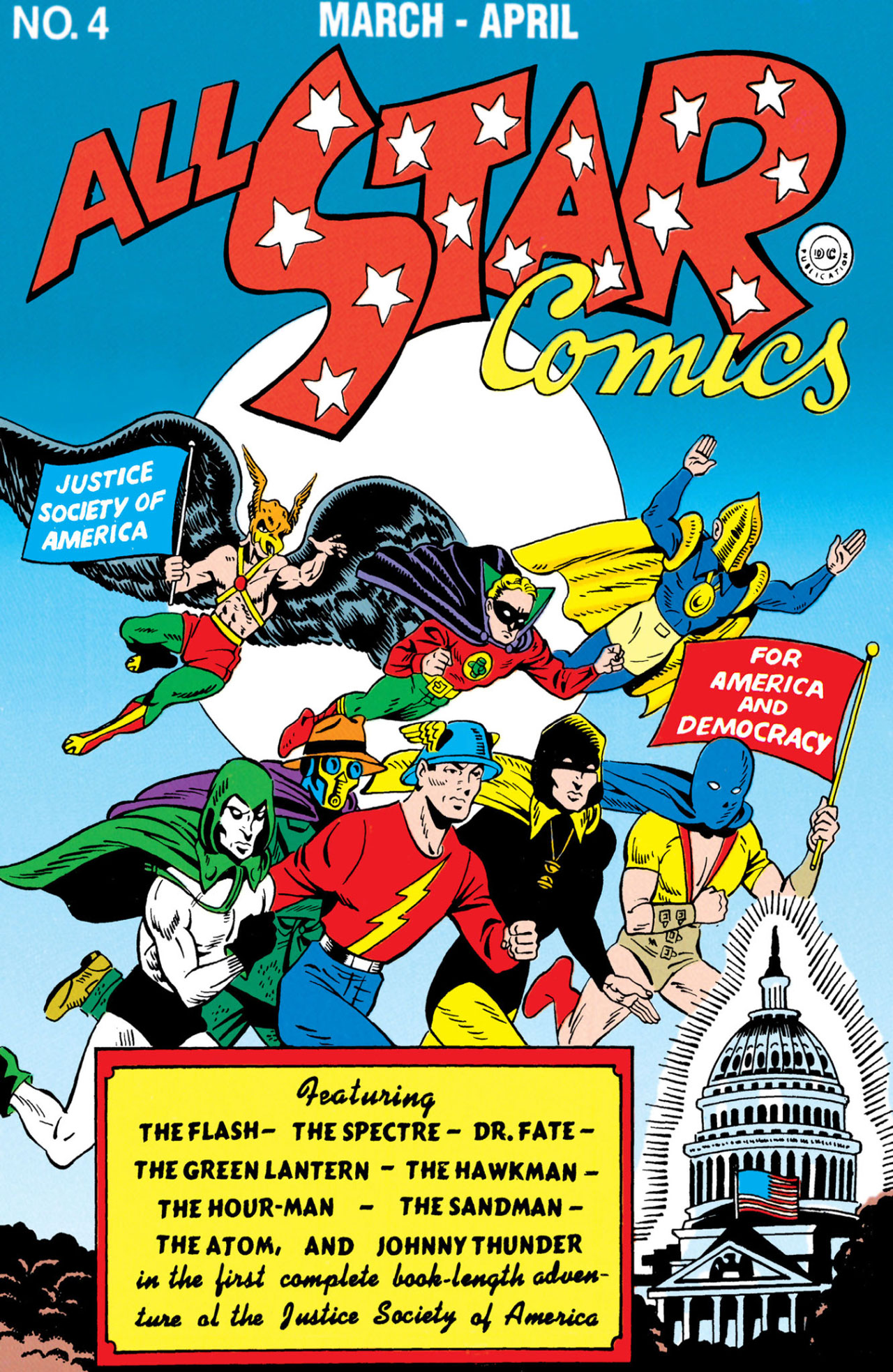 It’s no fluke that the first team of Super Heroes in comic book history called themselves the “Justice Society of America.” In their first full issue length adventure together, the team is seen marching together in front of America’s Capitol building, waving flags to show you exactly what they stand for. Only the inspiration of American values could bring the nation’s greatest heroes all together. Just as these 50 states are united, so too are the Justice Society. 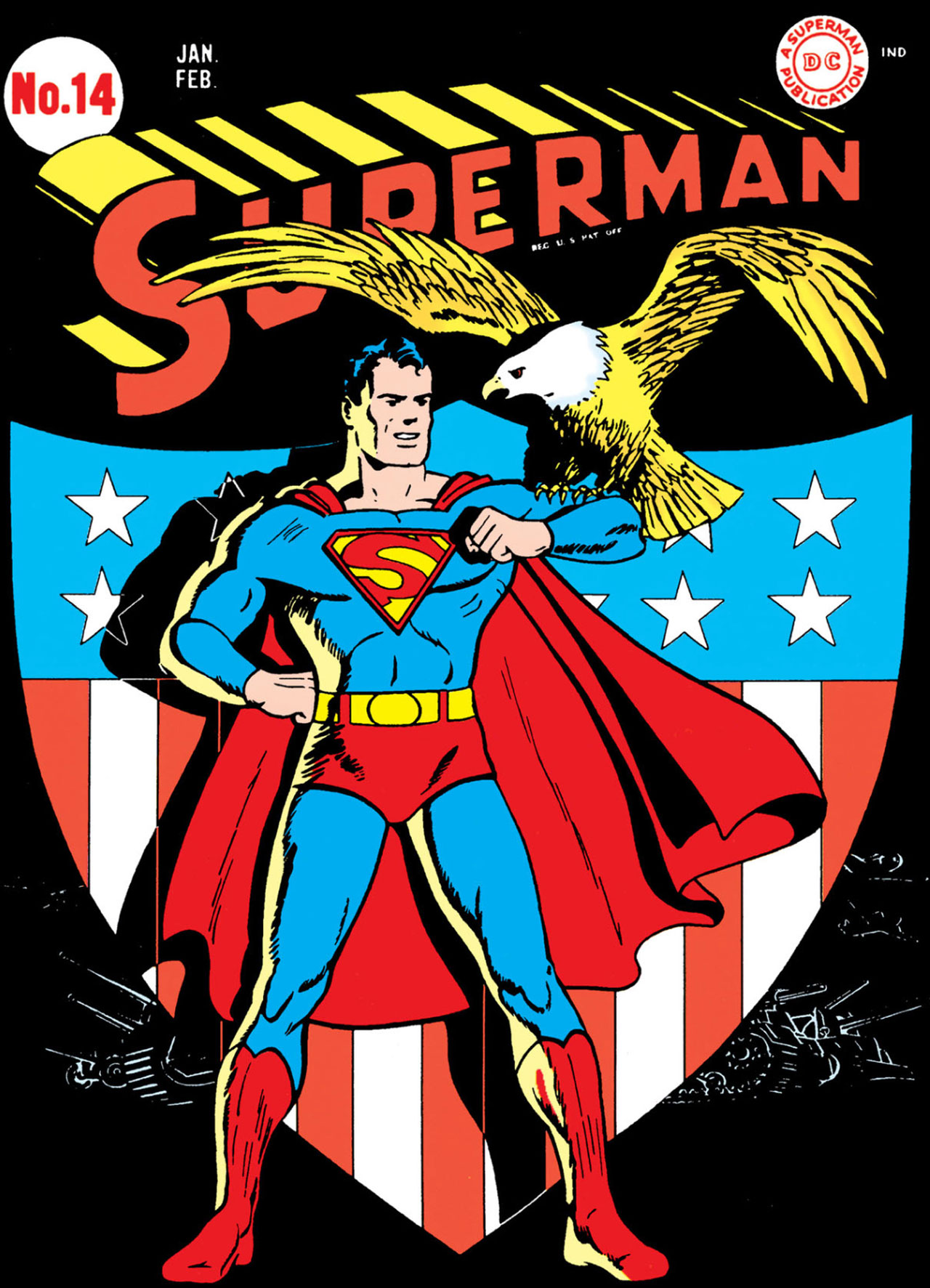 Only a few short years after the founding of DC Comics, America was embroiled in the greatest crisis of the 20th century: the battle of freedom and fascism we know today as World War II. In December of 1941, Axis forces struck their first and greatest attack on America with the tragic bombing of Pearl Harbor. The very next month, in an inspiring show of solidarity, America’s greatest hero appeared on the cover of Superman #14 with a bald eagle on his arm and an American shield at his back. 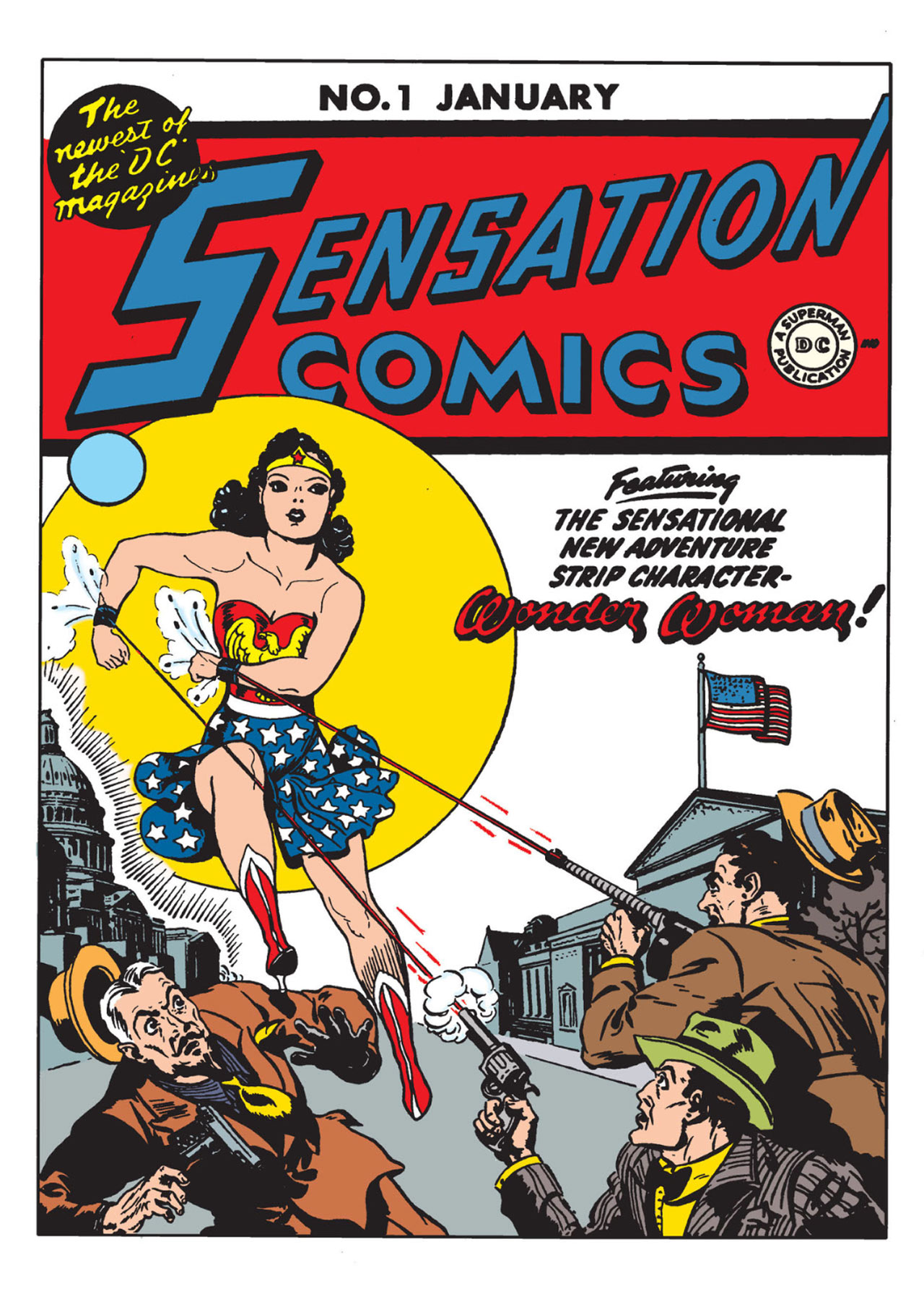 Clad in a skirt straight from Betsy Ross’s sewing room, DC’s first lady of heroism arrived on the scene with stars on her dress and an eagle on her breast. This sensational first issue in her first ongoing series tells us that Wonder Woman has arrived, and by God, she is American. 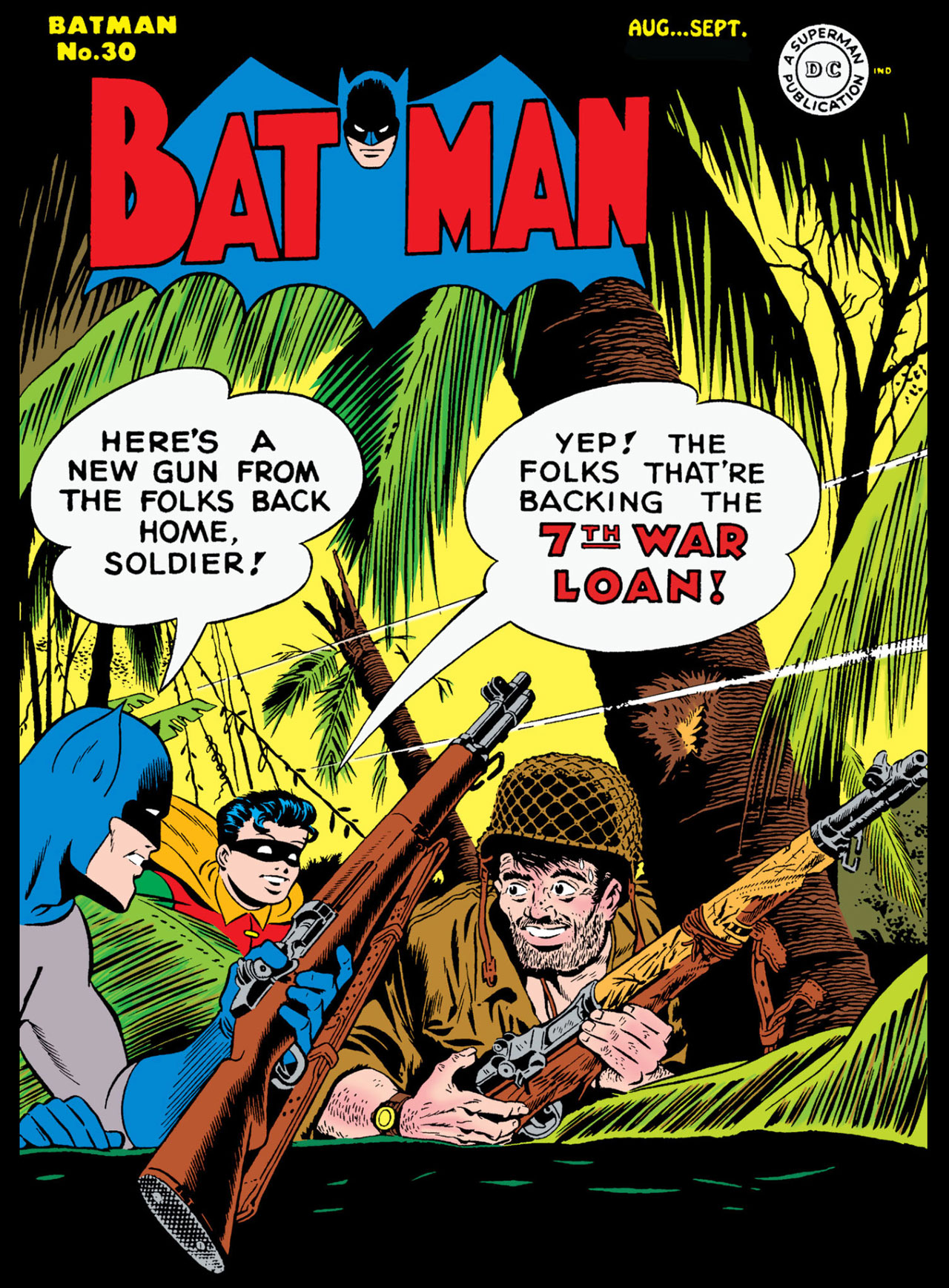 Caped Crusader purists, take note: just because Batman himself doesn’t use guns, doesn’t mean he won’t support our troops. Following the early symbolic example of Superman, all of DC’s heroes spent the war beseeching its readers to pitch in and help the war effort however they can, whether it was saving stamps, or recyclables, or buying war bonds to keep America in a costly battle of freedom against fascism. Here, Batman gets into the thick of it himself, to directly deliver the fruits of YOUR patriotic donations to our fighting forces across the seas. 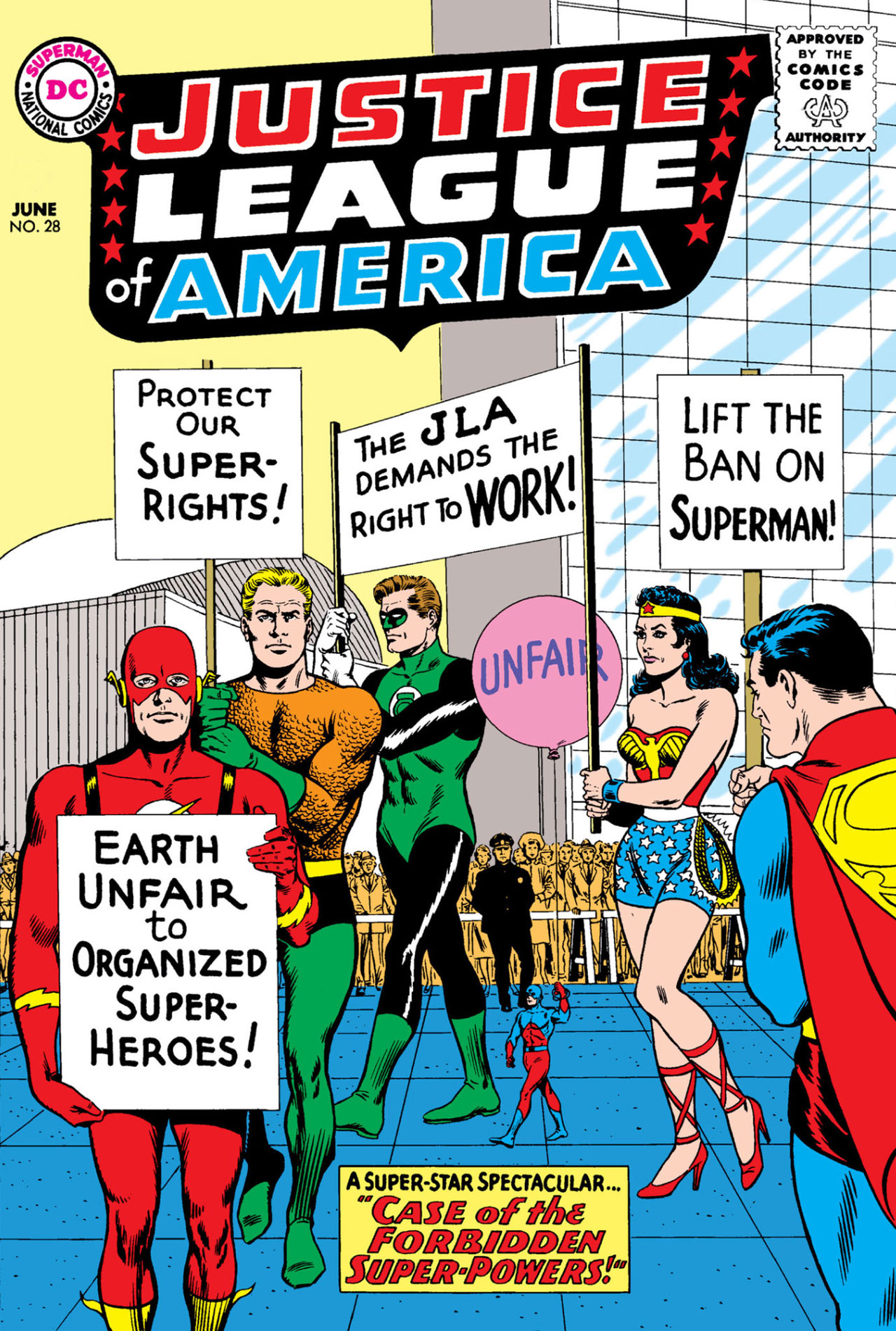 While there’s not a flag to be seen (save perhaps Wonder Woman’s costume), Justice League of America #28 should be considered one of the most patriotic DC covers of all time. What makes this country special isn’t our iconography of stripes and stars and eagles; it’s our freedom to take the powers at be to task when the people are treated unfairly. The right to organize and the right to protest are cornerstones of what makes America truly great. Here, the Justice League demonstrates that making your voice heard in America goes far beyond the polling place every election. The democratic process occurs every day. 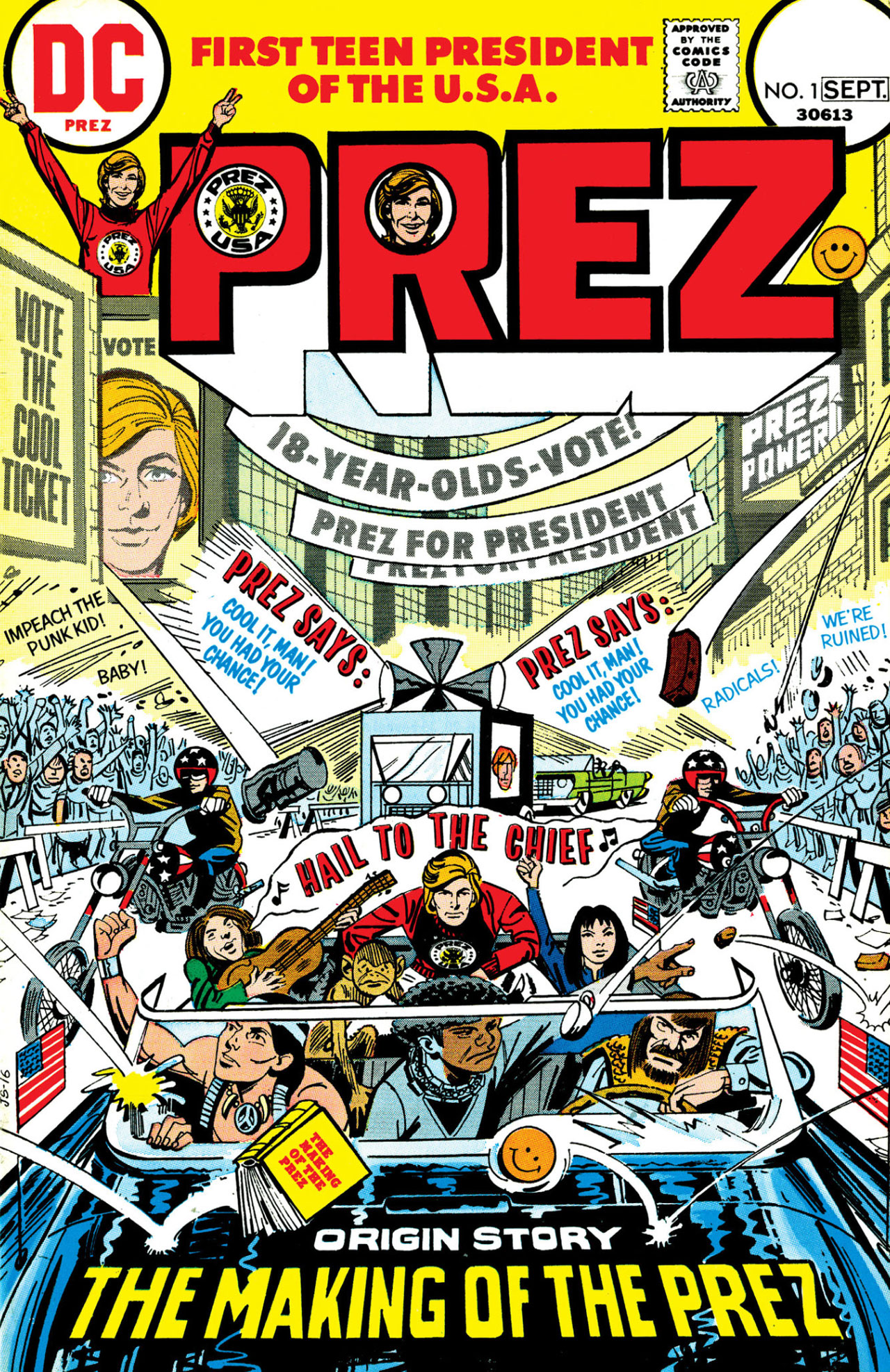 Nothing is more important to the progressive evolution of democracy than its youngest participants. As society moves forwards, the needs of the American people change with each generation, and new long buried or ignored injustices are uncovered and confronted. At its face, “Prez: Teen President” is a whimsical concept; but underneath the surface lies a message that it’s America’s youth which will drive our nation towards its future. Cool it, man! You had your chance! 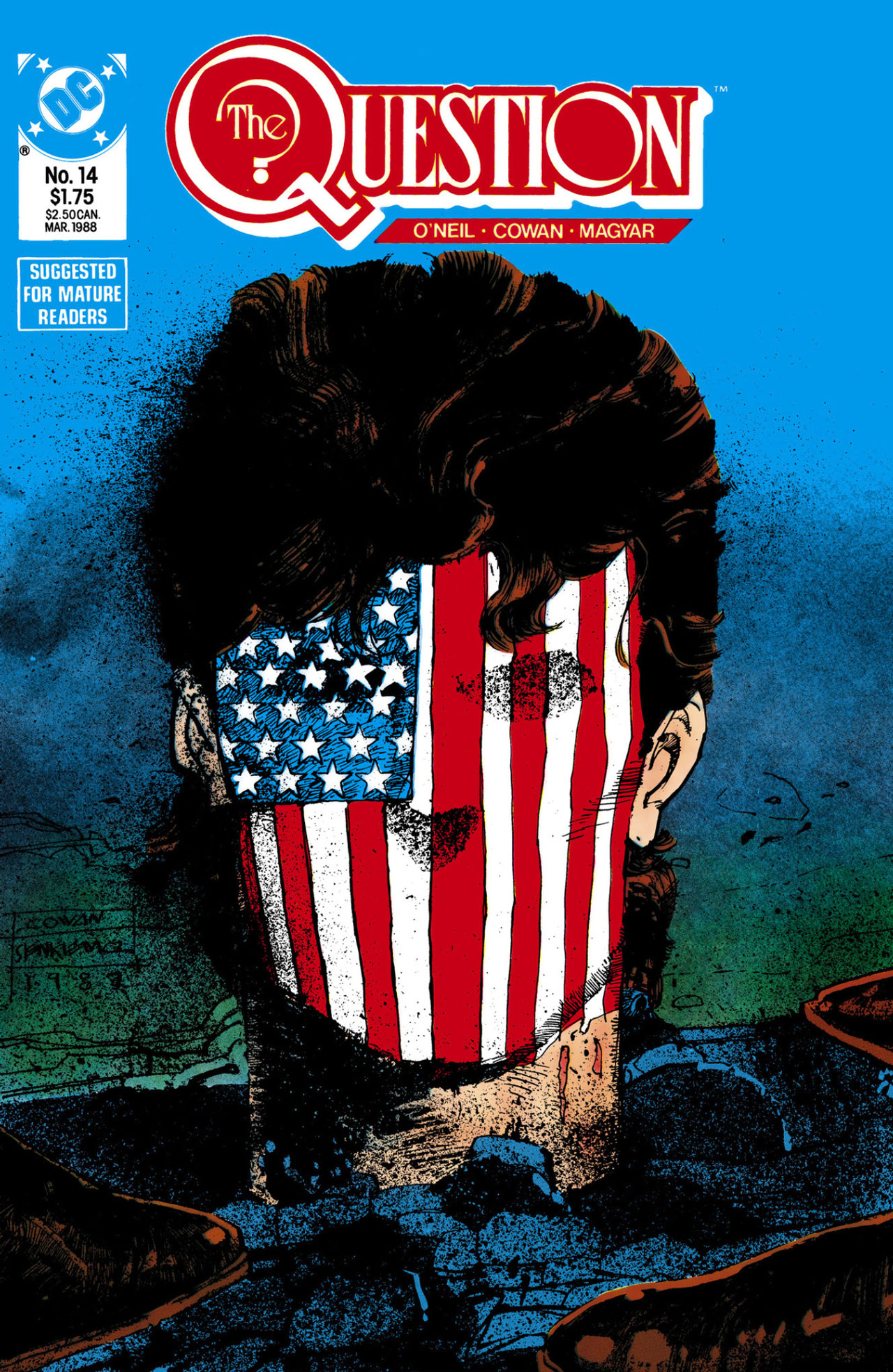 I mean, come on. It doesn’t get better than this. 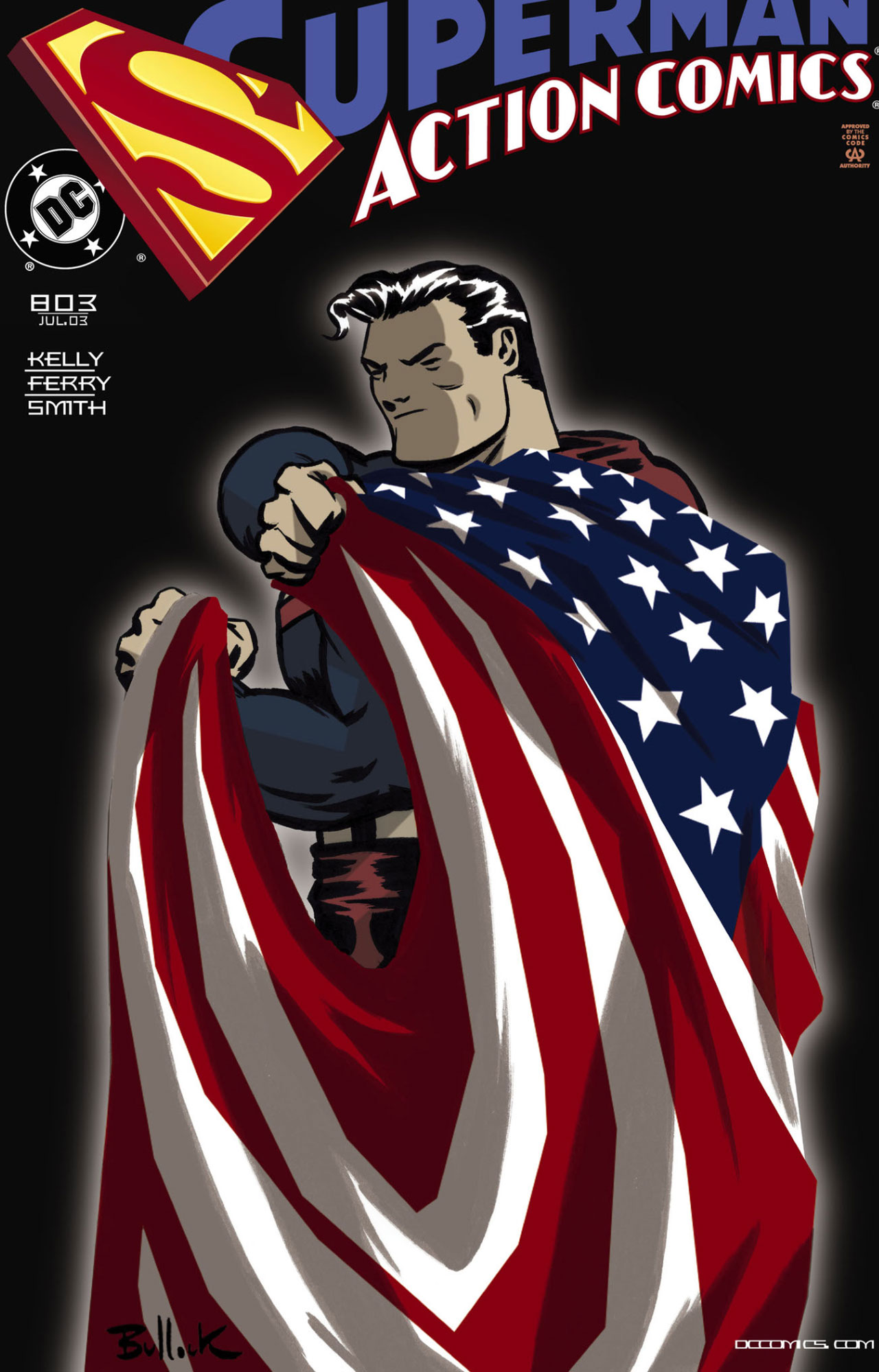 It’s hard to imagine now, but there was a period in Superman’s history when General Zod wasn’t Kryptonian. From 2001-2003, Zod was reimagined as a Soviet cosmonaut, continuing to wage war against America with cosmic powers. Here, draped in the American flag, Superman shows us what side he’s on in a cold war reignited. 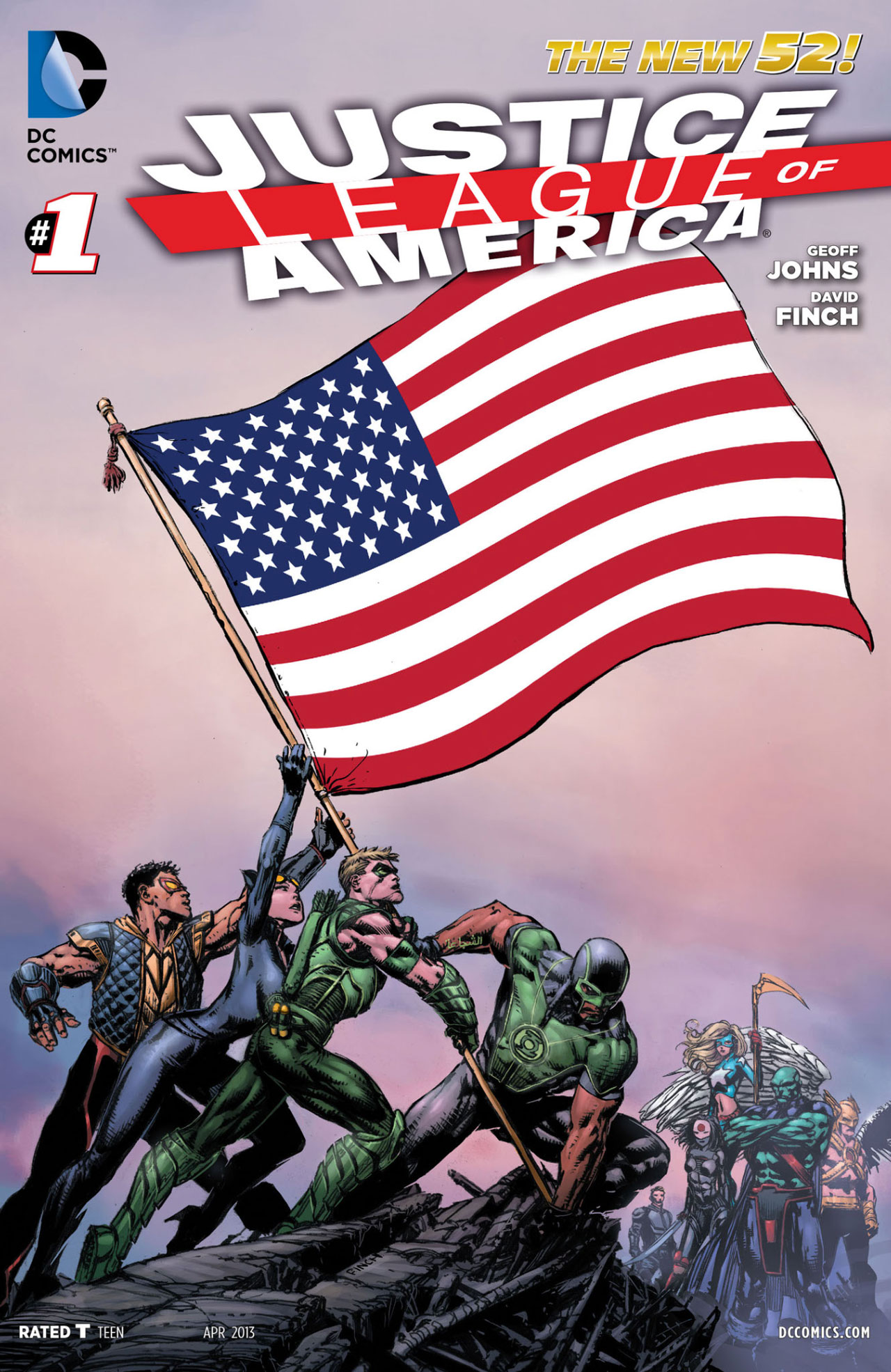 This tribute to the Iwo Jima Memorial statue in Arlington, Virginia was used to introduce a new incarnation of the JLA for the New 52. But what’s really special about this issue was that it was shipped with 52 different variant covers: each one depicting the flag of a US state, plus the flags of Washington DC and Puerto Rico. 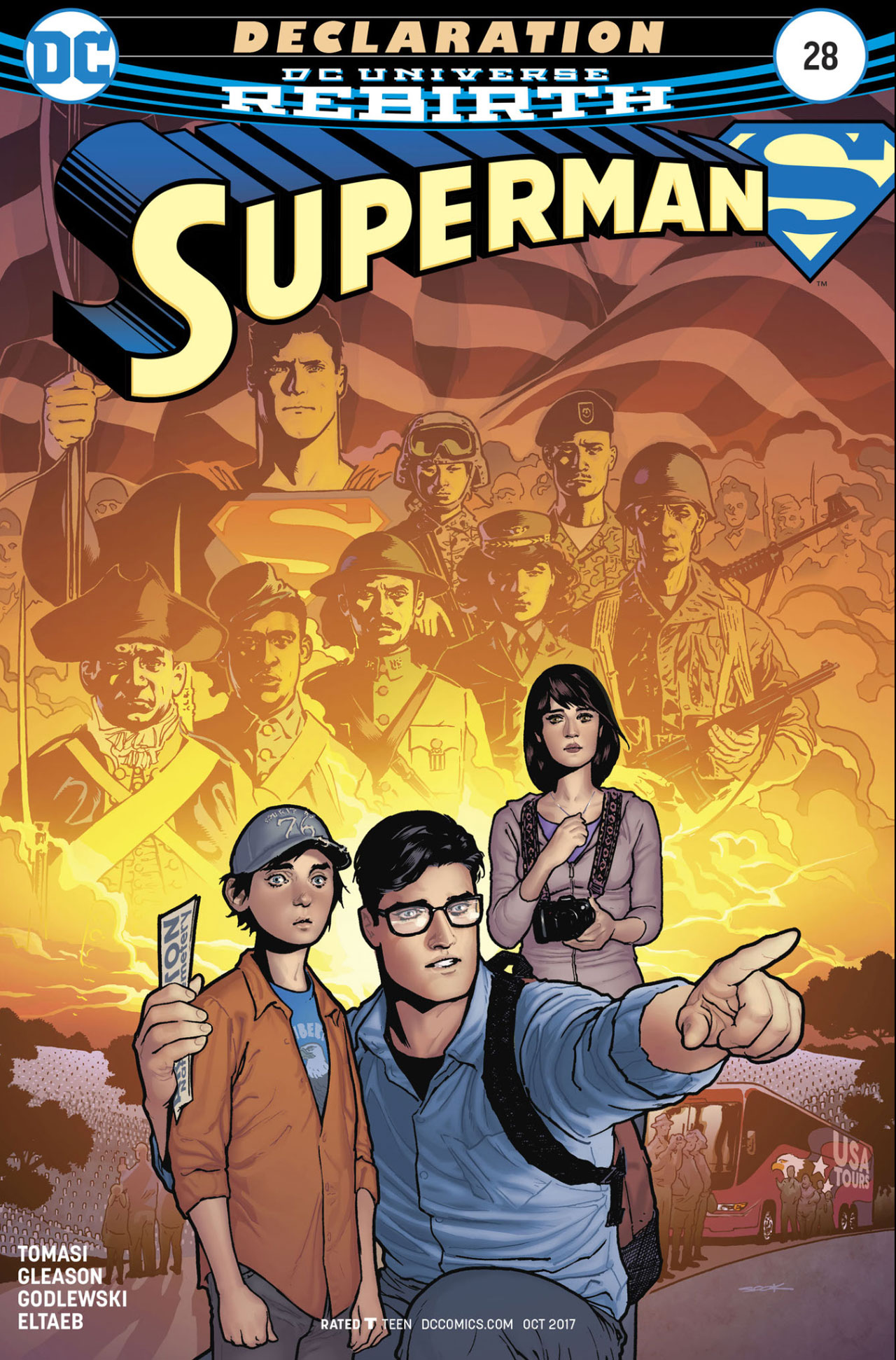 Peter J. Tomasi’s tenure on Superman from 2016-2018 dedicated to his role as a husband and father is one of the most beloved runs on this American icon in recent memory. Clark spends this Rebirth series instilling in his son Jonathan the same values which made him into the Superman he is today, but issues 27 and 28 are particularly poignant--where Clark takes Jon and Lois on a family trip to show them exactly what makes America special to him, an immigrant from beyond the stars.

What are your favorite patriotic moments in DC history? Let us know this 4th of July weekend in our Community!