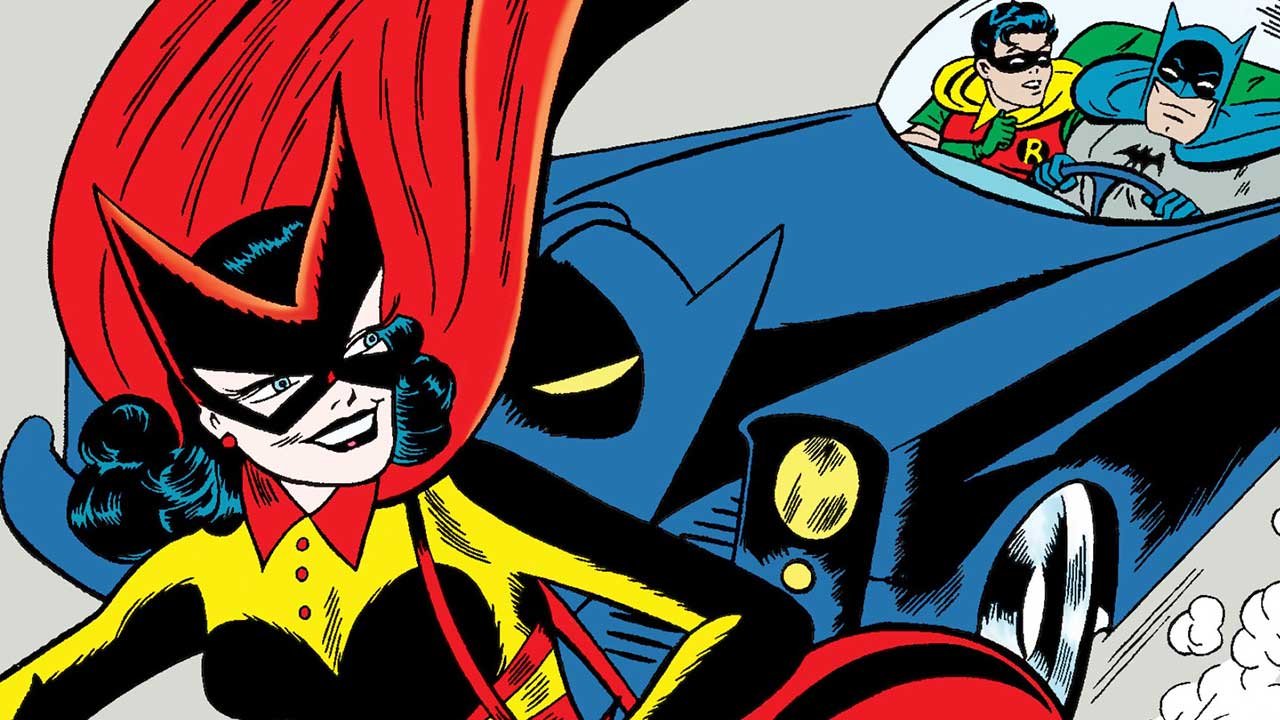 In the Silver Age of Comics, Batman reached new heights of popularity -- thanks to new characters, new concepts, and the 1966 Adam West-starring live-action Batman series. Much of this history was made in the pages of Detective Comics, the very same book in which the Dark Knight debuted during the Golden Age. To celebrate Batman’s 80th anniversary and release of Detective Comics' 1000th issue, we're taking a look at some of the title’s most defining moments. Here are ten from the Silver Age of the 1950s and '60s… 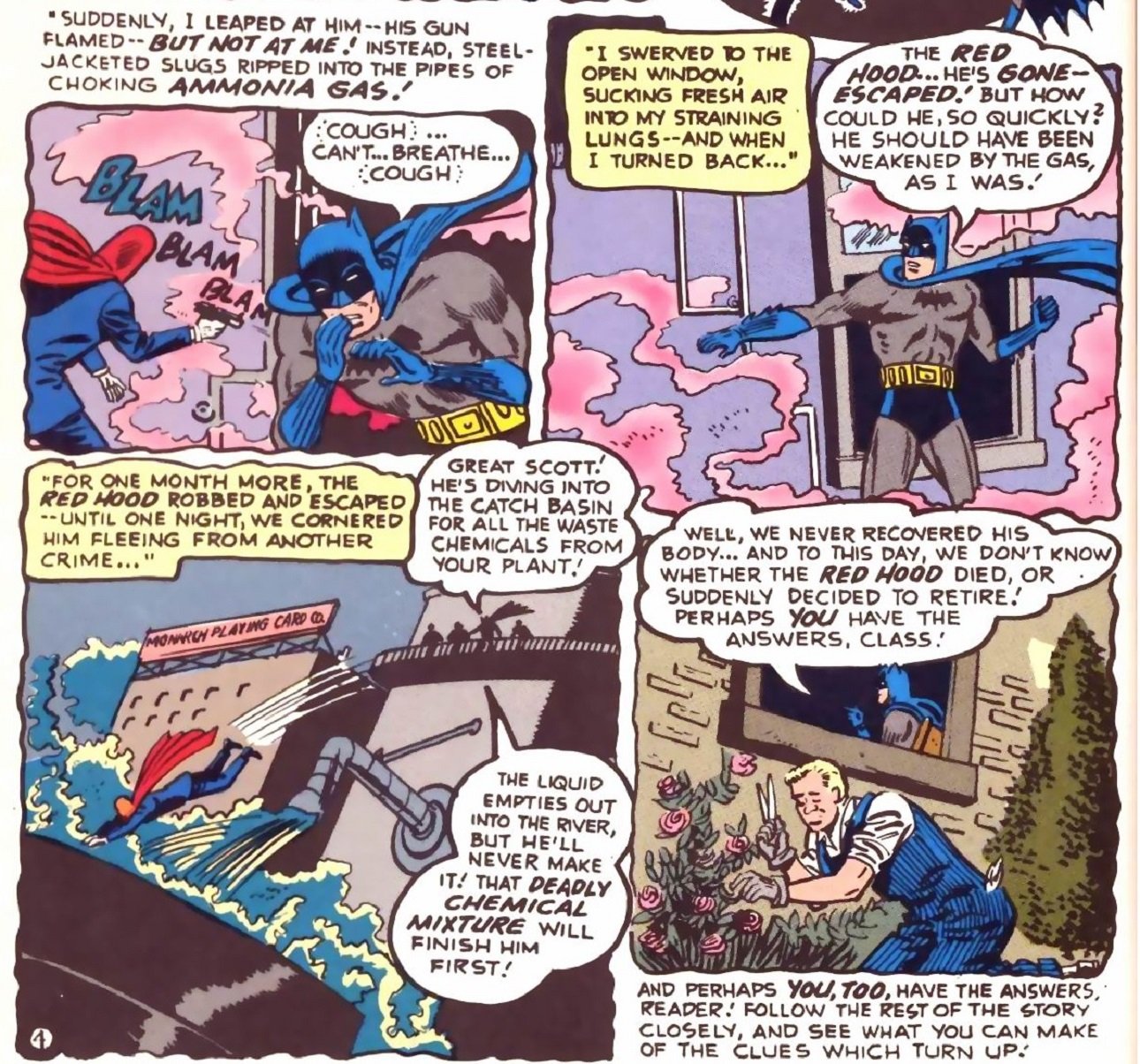 1951's Detective Comics #168 (written by Bill Finger, penciled by Lew Sayre Schwartz and Win Mortimer) has two important contributions to the Batman mythos. The story is the first appearance of the Red Hood, a criminal revealed in this story as an early identity of The Joker. The Red Hood identity has since evolved and is currently used by Jason Todd. This issue also presents the Joker's origin, as he dives into a vat of chemicals. This origin was used in the 1989 Batman film, and more recently in Fox’s Gotham. The effects of this classic story can still be felt in Batman comic books today, making this issue a treasured classic.

Meet the Batmen of All Nations 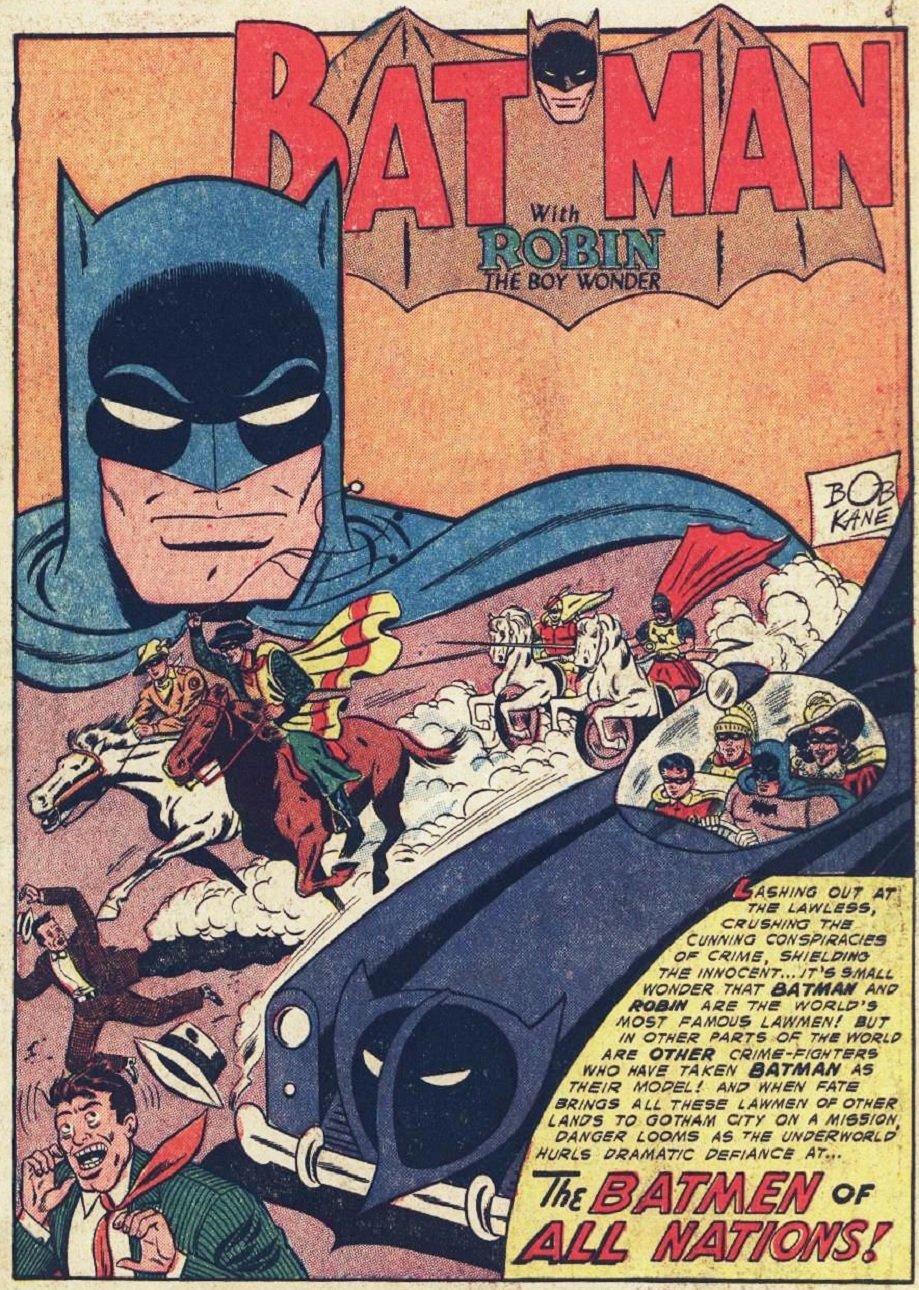 In 1955's Detective Comics #215 (written by Edmond Hamilton and penciled by Sheldon Moldoff), the Dynamic Duo discover they've inspired an international group of heroes known as the Batmen of all Nations. Each hero represented a different country, including Knight and Squire who protected the streets of England. The culturally diverse group of heroes teamed up with Batman throughout the Silver Age and returned during Grant Morrison’s epic run, inspiring the Dark Knight to form Batman Incorporated. The group was later seen in the Batman: The Brave and the Bold episode “Powerless”.

Before Stephanie Brown, Harper Row, Helena Bertinelli and Barbara Gordon – there was Kathy Kane, the first female vigilante to join the Dynamic Duo’s crusade for justice! Kathy Kane first suited up as Batwoman in 1956's Detective Comics #233 (written by Edmond Hamilton and penciled by Sheldon Moldoff), and despite Batman’s desire to get rid of her, she was a constant presence throughout the 1950’s. Batwoman was originally created to add a female presence to the male dominated issues. In the days before the women’s lib movement, Batwoman’s arsenal consisted of weapons modeled after makeup products. Yet Kathy helped pave the way for all of Gotham’s female crimefighters who followed her, including Kate Kane who currently appears as Batwoman in the CW’s Arrowverse shows. A variant of Kathy Kane’s Batwoman appeared in the Batman: Brave and the Bold episode “The Criss Cross Conspiracy”.

The Murder of the Waynes is Finally Solved 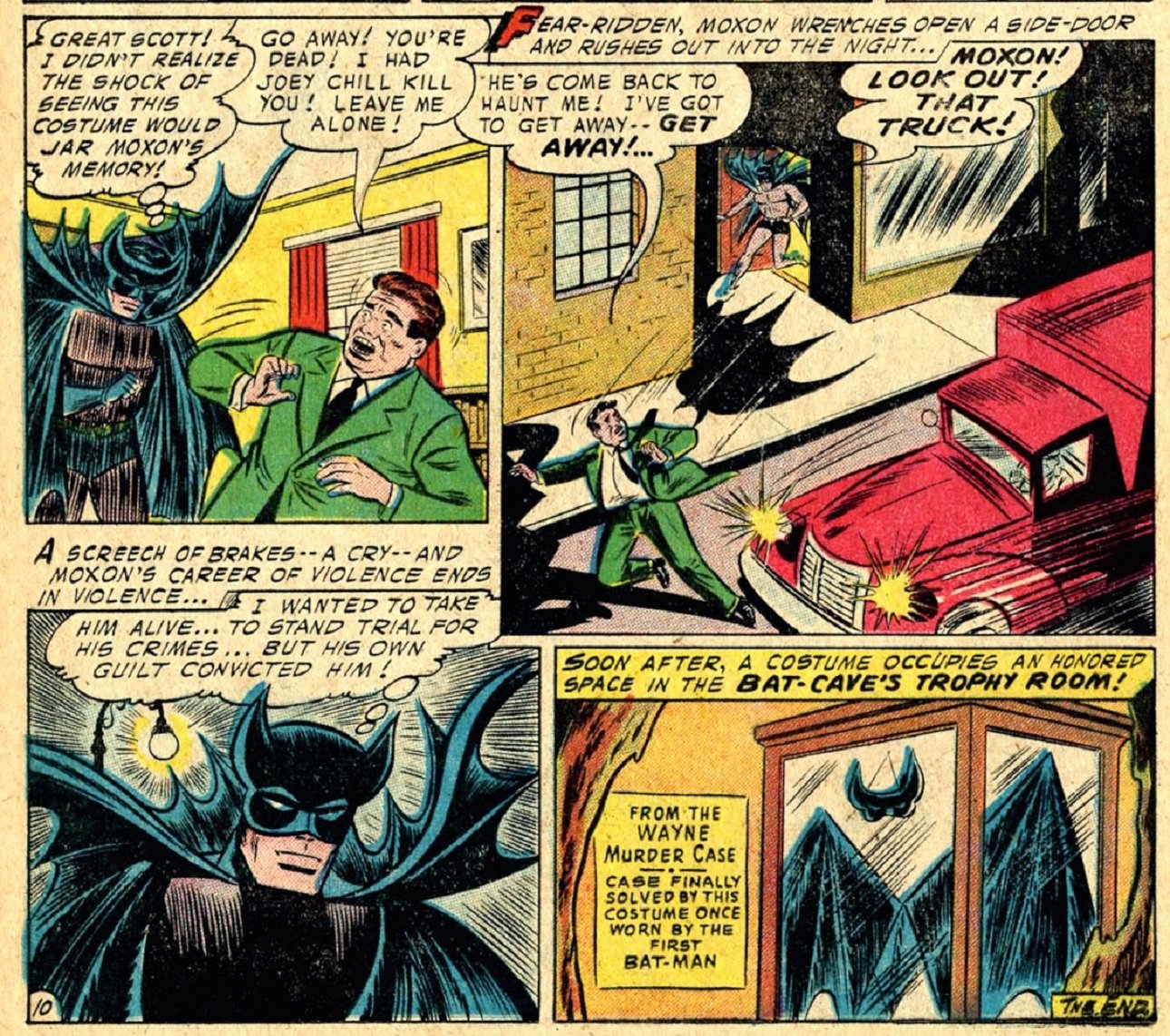 Everything Bruce Wayne thought he knew about his father’s past and eventual murder was turned on it’s head in 1956's Detective Comics #235 (written by Bill Finger and penciled by Sheldon Moldoff). While going through old home movies, Bruce learns that his father once dressed as “Bat-Man” at a costume party, where he wound up taking down mobster Lew Moxon. After some digging, Batman discovered that Lew Moxon had hired Joe Chill to murder his parents, proving their deaths were part of a larger criminal conspiracy. Batman confronted Moxon dressed in his father’s old costume, but the mobster was killed by oncoming traffic when he ran away in fear. The story gave Bruce closure on the death of his parents and helped him feel more connected to his father. This story also established that Thomas Wayne was a physician, which has remained a consistent part of his backstory ever since! Elements of this story were later adapted in the Batman the Brave and the Bold episode “Chill of the Night”.

Batman is one of the most patient heroes in the DC Universe, but in 1959's Detective Comics #267 (written by Bill Finger and Sheldon Moldoff) he met someone who tested that patience like no other! Like Mxyzptlik, Bat-Mite is an Imp from the Fifth Dimenson – but Mxy annoys Superman out of malice, whereas Bat-Mite just wants to help and winds up annoying Batman anyway! Despite his Fifth Dimension powers, Bat-Mite’s efforts to assist the Dynamic Duo usually wind up making things worse! Bat-Mite took a hiatus when the “New Look” era retired some of the series sillier elements, but the Imp has made a comeback in comics and has even taken his campaign to help Batman to other media! Bat-Mite can be seen in every episode of The New Adventures of Batman and had a few memorable episodes on Batman: The Brave and the Bold. 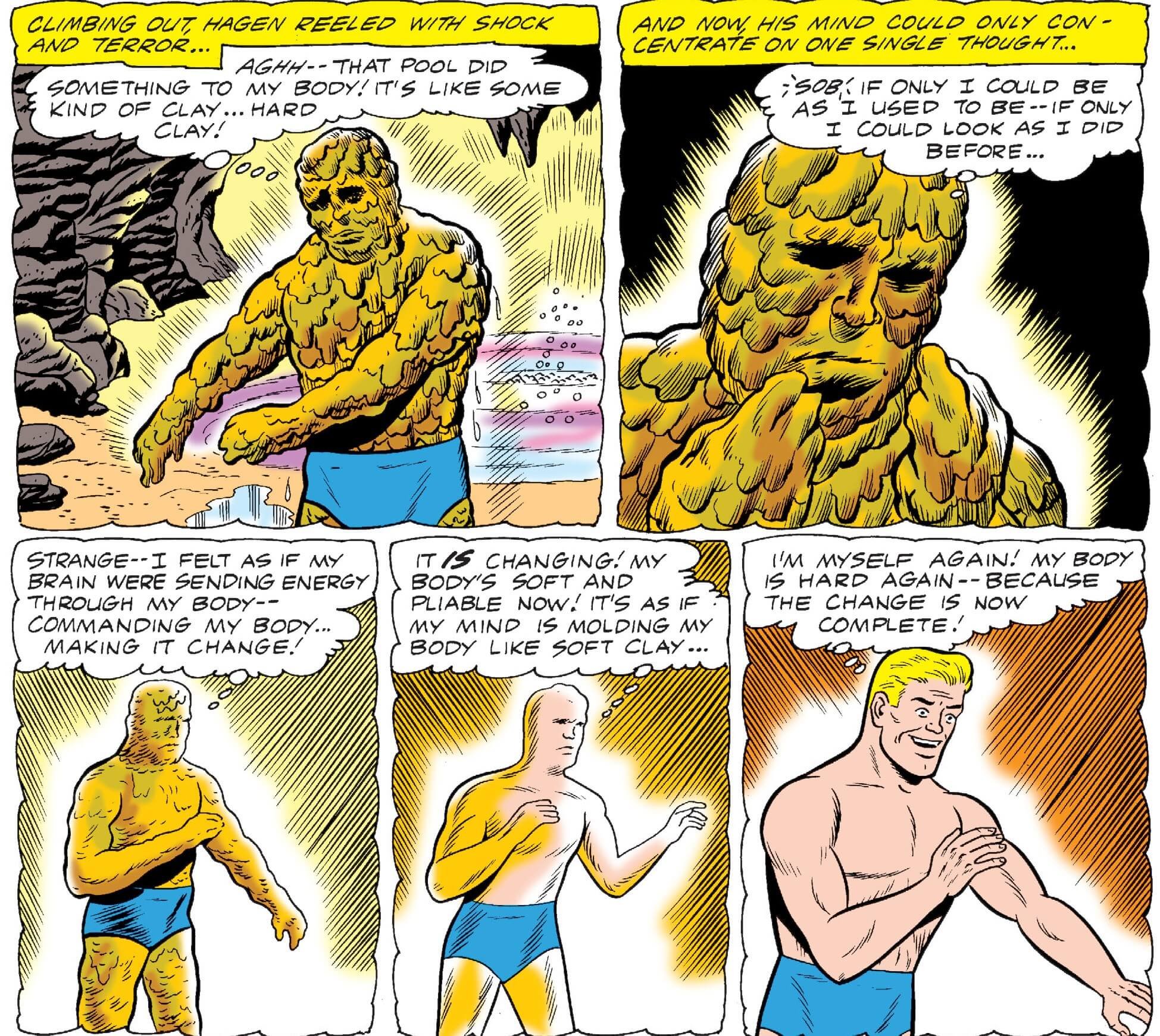 Although Batman had first fought a version of Clayface in Detective Comics #40 (written by Bill Finger and penciled by Bob Kane), the malleable villain didn’t get his iconic powers until 1961's Detective Comics #298 (written by Bill Finger and penciled by Sheldon Moldoff). The original version of Clayface was a disgruntled actor in a mask, but Matt Hagen changed everything when he came across a mysterious pool in a cave. Bathing in the liquid, Hagen discovered he was now able to transform his body into various shapes. Since then, the protoplasm mud-man has been the form Clayface is most known for. When Basil Karlo (the original Clayface) returned, he was given powers and a look like Matt Hagen, cementing Clayface (no pun intended) as the shapeshifter we know him as today. Without this story, we never would’ve had the classic Batman: The Animated Series two-parter “Feat of Clay”. 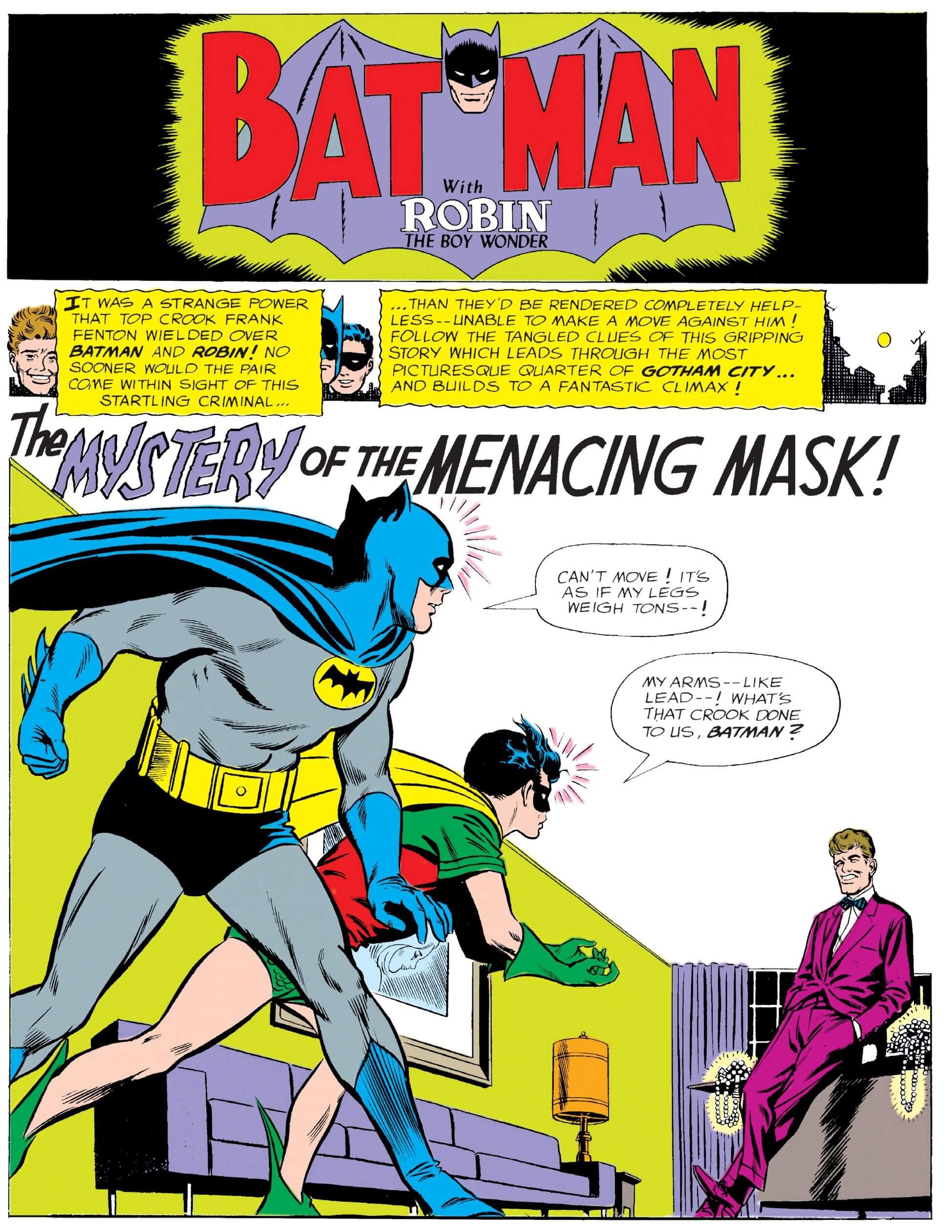 In 1964 the Batman titles went through a creative overhaul, first seen in Detective Comics #327 (written by John Broome and penciled by Carmine Infantino), exactly 300 issues after the Caped Crusader’s debut! Julius Schwartz had recently become editor for the Batman titles and brought Carmine Infantino on as artist for Detective Comics, hoping he’d be able to recreate the same magic they found when they relaunched Flash. Schwartz encouraged Infantino to depart from the house style done in previous issues and make the style his own. As a result, Carmine Infantino became the first artist not to sign his name as “Bob Kane”. This era of Batman comics became known as “The New Look”. The “New Look” referred to more than just the art; the comics dropped some of the sillier elements like Bat-Mite, Ace the Bat-Hound and Batwoman. The Caped Crusader’s costume was given an update adding the iconic yellow oval over the bat symbol on his chest. This became Batman’s iconic look for decades, and the yellow oval was a cornerstone in many marketing campaigns. The “New Look” was incorporated into Adam West’s 1966 live-action Batman series, which brought Batmania to the entire world! 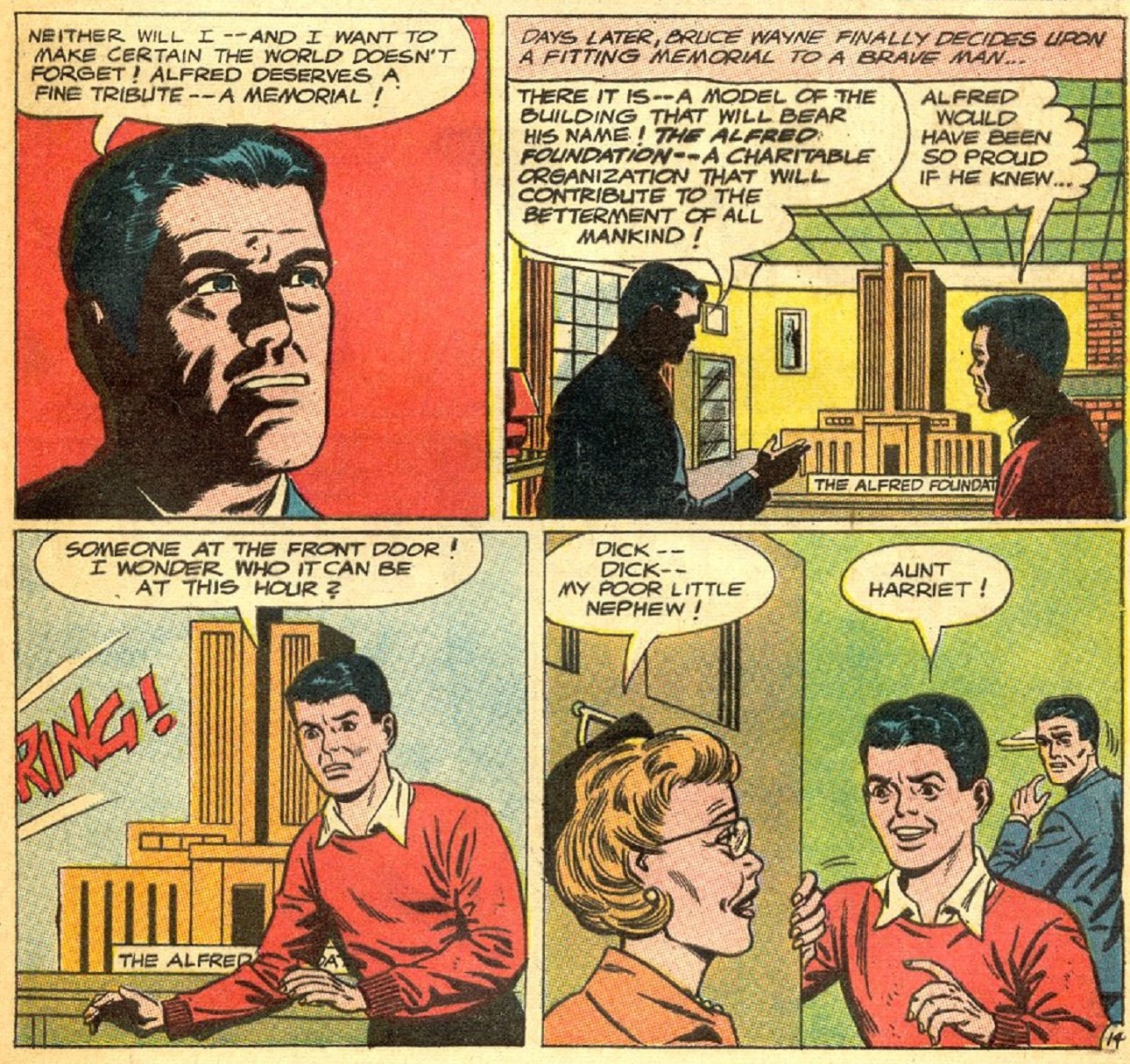 The Dynamic Duo faced one of their greatest tragedies when Alfred was killed in 1964's Detective Comics #328 (written by Bill Finger and penciled by Sheldon Moldoff). When the loyal butler saw some heavy boulders falling towards the Dynamic Duo, he pushed them out of the way at the cost of his own life. Heartbroken, Bruce Wayne and Dick Grayson started the Alfred Foundation to honor their friend’s memory. The story ends with the sudden arrival of Harriet Cooper, Dick Grayson’s aunt. Aunt Harriet sensed that the duo needed a caregiver now that Alfred was gone and moved herself into Wayne Manor. Aunt Harriet added some comic relief to Detective Comics, in addition to complicating Bruce and Dick’s home life since she was unaware of their double lives. This issue is also important because it sets up the Alfred Foundation, an organization that would later become a big part of Batman lore under a different name… 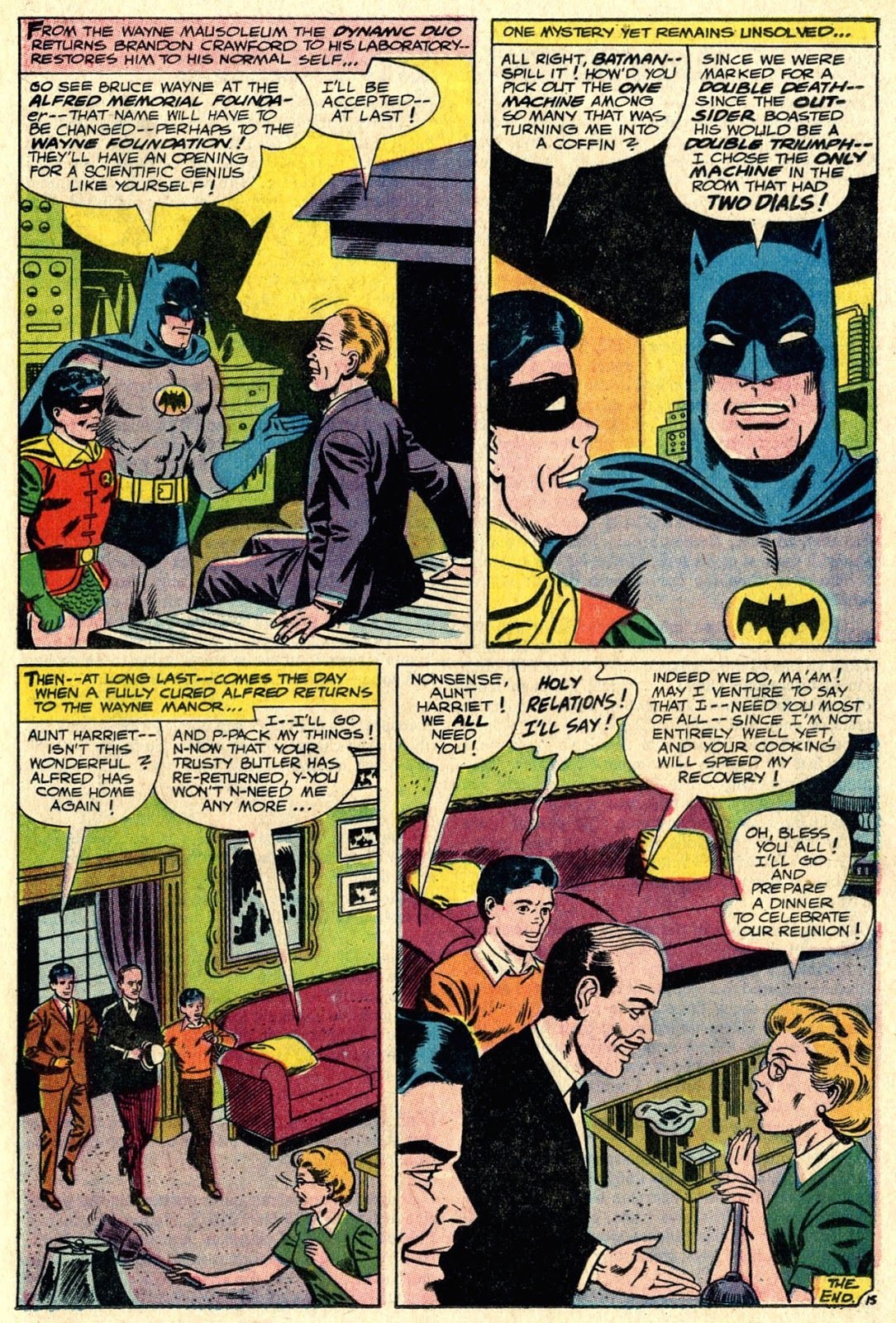 You didn’t think Alfred would stay dead did you? 1966's Detective Comics #356 (written by Gardner Fox and penciled by Sheldon Moldoff) not only featured the return of Alfred, but it also concluded the story of the Outsider! Previous issues of Detective Comics had featured a mysterious villain known as the Outsider, who the Dynamic Duo were never able to catch or learn his origins! In this story Batman was shocked to learn that the Outsider had the same fingerprints as his deceased butler Alfred! It turned out that Alfred had not been fully deceased when he was buried, and a scientist had attempted to revive him with radiation. The radiation treatment had transformed Alfred into the villainous Outsider, which Batman and Robin were able to reverse by giving him another dose. Since Alfred wasn’t dead, the Alfred Foundation was renamed the Wayne Foundation to honor Bruce’s fallen parents. It may be hard to believe, but before the Wayne Foundation, Bruce was an unemployed playboy with no direction in life aside from being Batman. The Wayne Foundation helped bring Bruce into the business world and eventually paved the way for Wayne Enterprises.

The Coming of Batgirl 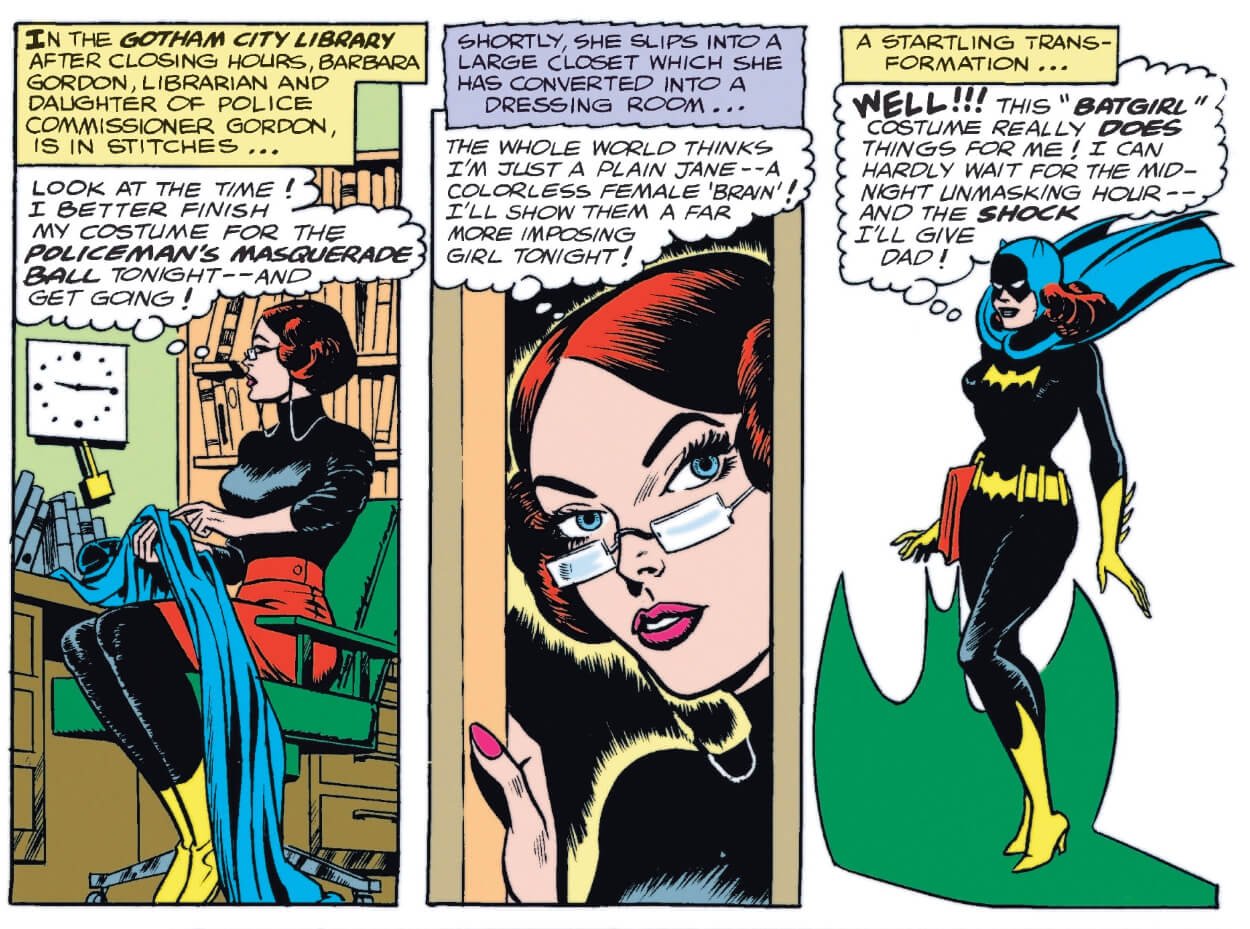 Barbara Gordon may not be the first person to call herself Batgirl, but she made the role her own! From the opening pages of 1967's Detective Comics #359 (written by Gardner Fox and penciled by Carmine Infantino), it was clear that Barbara was different. The commissioner’s daughter was an educated woman who ran the Gotham City library and her need to fight crime wasn’t driven by any romantic desire for the Caped Crusader. This Batgirl was her own person, working with the Dynamic Duo while maintaining her independence from them. Barbara Gordon has grown to become one of the most important members of the Batman family, and it all began here!

HONORABLE MENTION: While not Batman-related, 1955's Detective Comics #225 features the first appearance of the Martian Manhunter! J’onn J’onzz has gone on to become one of the most important heroes of the DC Universe, and was given center stage in the 2001 Justice League animated series!

What are you favorite Detective Comics stories? Let us know in our Community!