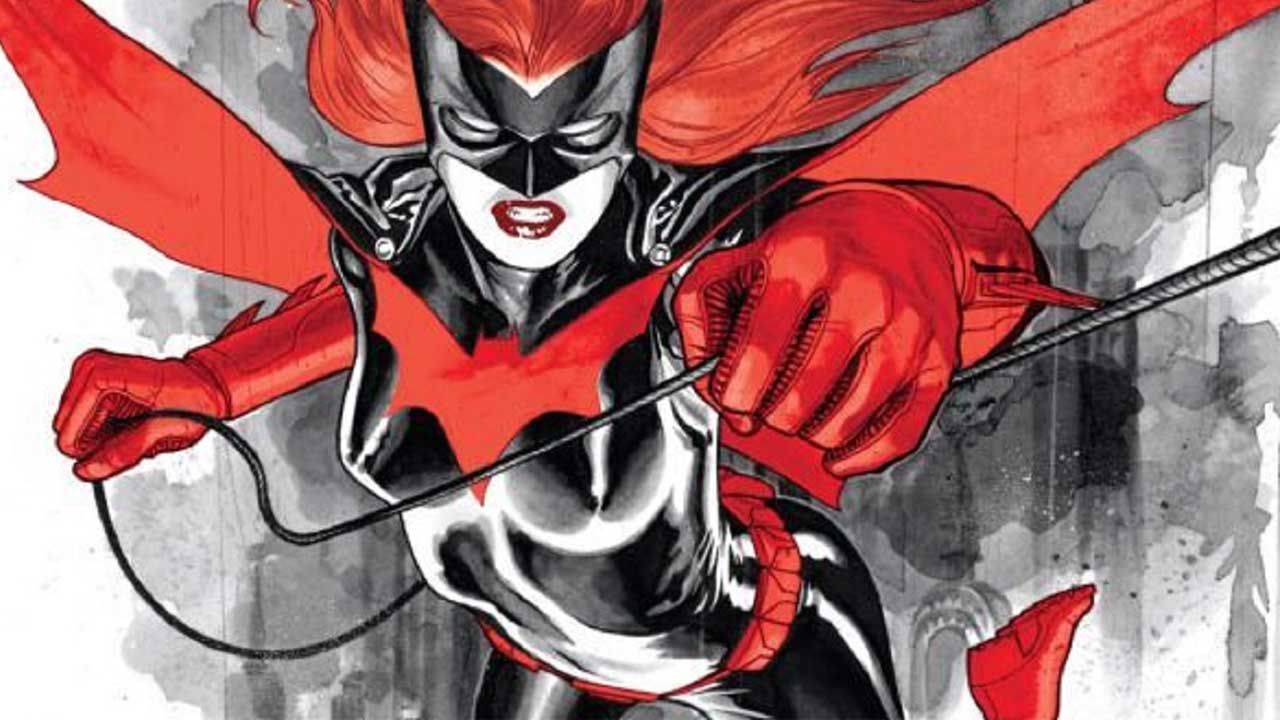 From James Gordon Jr.’s chilling murders to the daring new adventures of Batwoman, Detective Comics took the Modern Age of comics (and the New 52 and Rebirth eras of DC) by storm, introducing new characters and pushing the Dark Knight to the limit. As part of our continuing celebration of Batman’s 80th anniversary and Detective Comics 1000th issue, we’re taking a look at Detective Comics' most iconic moments. Let’s dive into the Modern Age…

Batman's Got a Gun 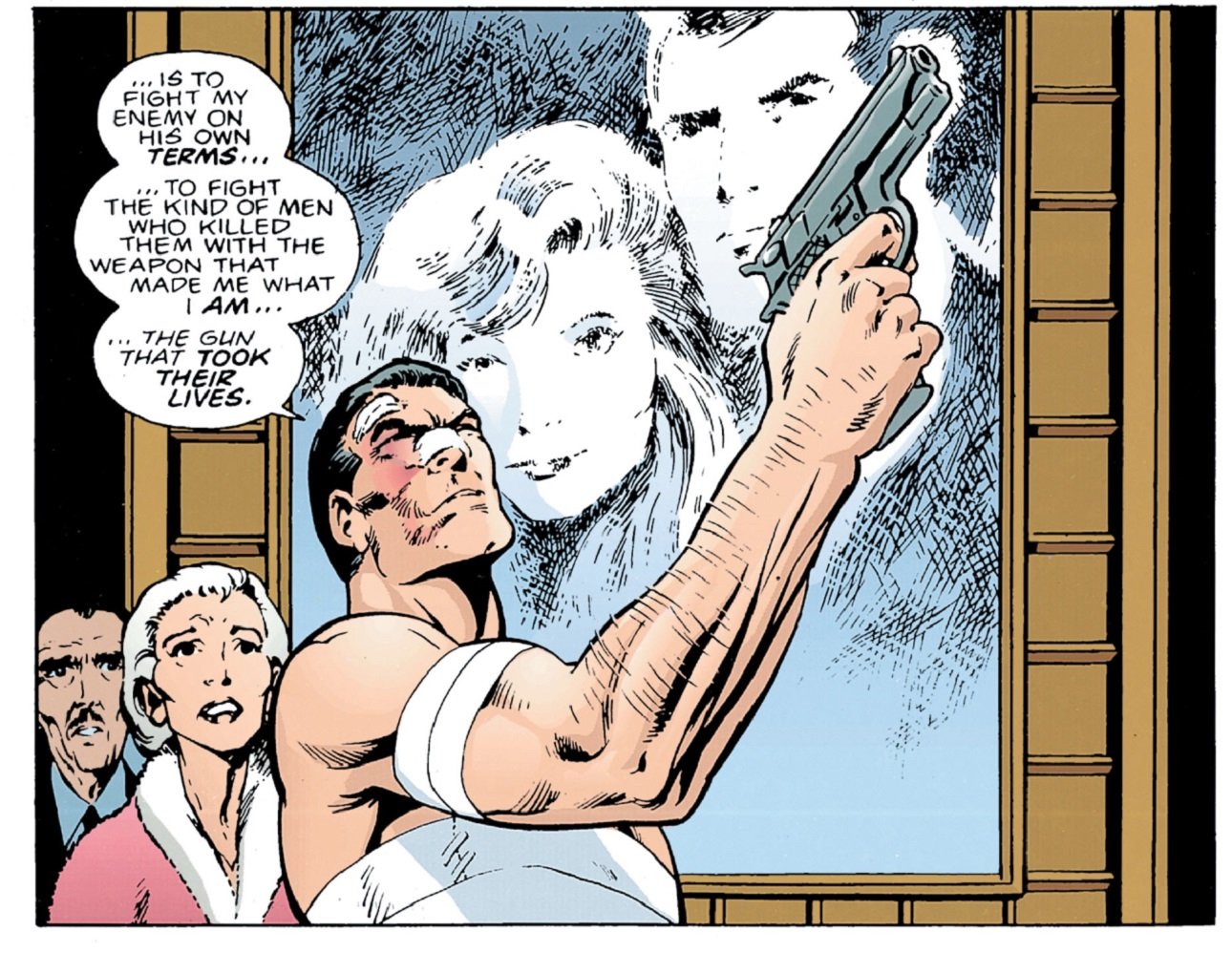 Following the events of 1987's gamechanging "Year One" storyline (presented in Batman #404-407), Detective Comics #575 (written by Mike W. Barr and penciled by Alan Davis) ushered the Dark Knight into the Modern Age by beginning a story that remains controversial to this day. In "Year Two", the Dark Knight is overwhelmed by a deadly new killer called the Reaper, causing him to re-examine his stance on using guns. Batman’s relationship with the GCPD crumbles and he turns to Gotham’s underworld for assistance with the Reaper. This puts him face-to-face with Joe Chill, the man who killed his parents... This classic deconstructs Batman like never before, and asks some new and difficult questions.

The Ventriloquist and Scarface's First Appearance 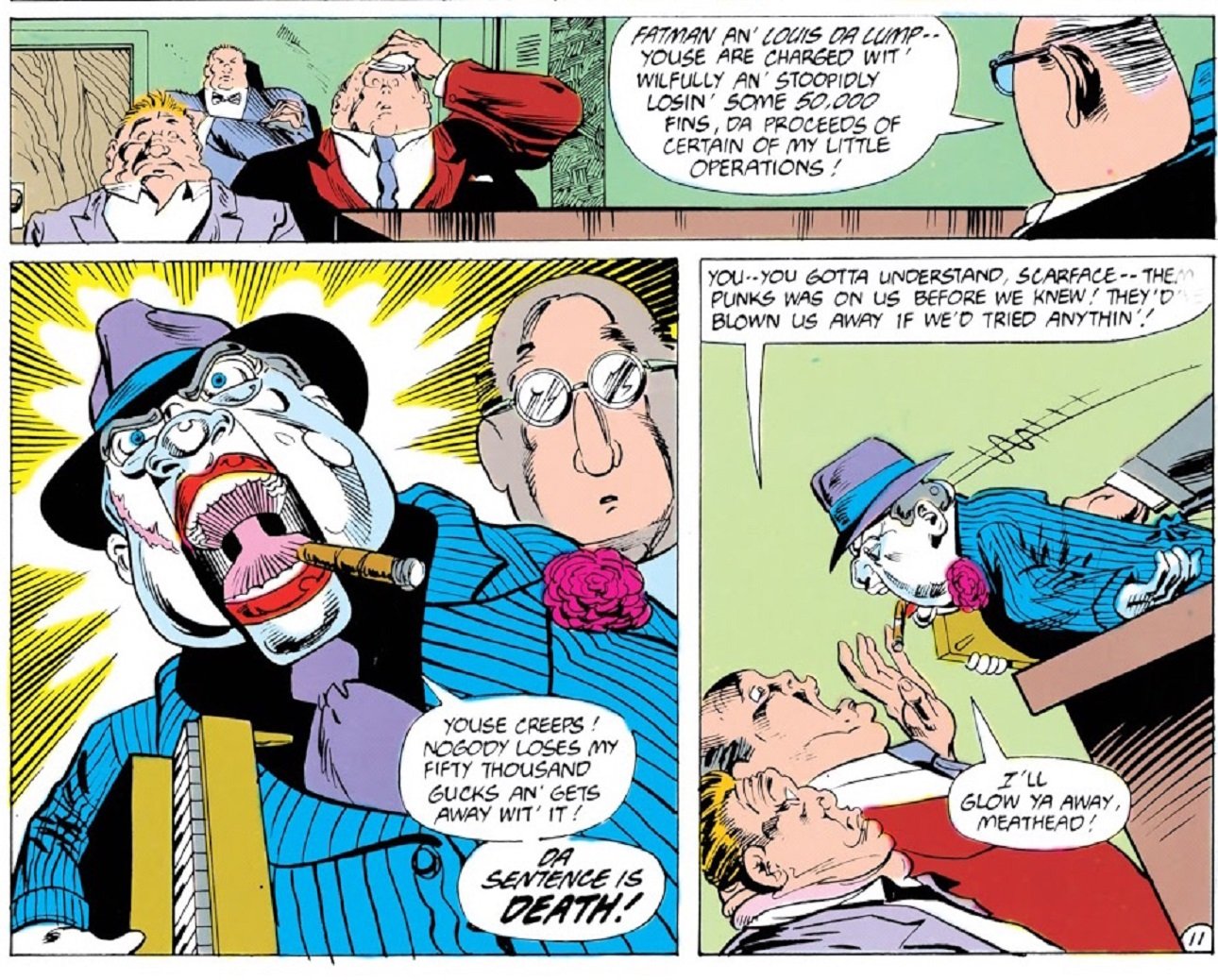 1988's Detective Comics #583 (written by John Wagner and Alan Grant, penciled by Norm Breyfogle) was the first issue teaming up writer Alan Grant with penciler Norm Breyfogle. Together, Grant and Breyfogle produced one of Detective Comics' most memorable runs, and they kicked it off by introducing one of Batman’s most offbeat villains. A new drug called Fever was sweeping Gotham City, and Batman was shocked to learn the supplier was a puppet named Scarface and his operator, the Ventriloquist. While Scarface has the short-tempered personality of a 1930s movie gangster, the Ventriloquist is a timid man. In his first appearance, Scarface murders one of his henchmen out of anger, proving that a lifeless puppet can be as deadly as any member of the Dark Knight's rogues gallery. The Ventriloquist and Scarface have subsequently appeared in Batman: The Animated Series, The Batman, and, most recently, Fox’s Gotham.

The Death of Janet Drake 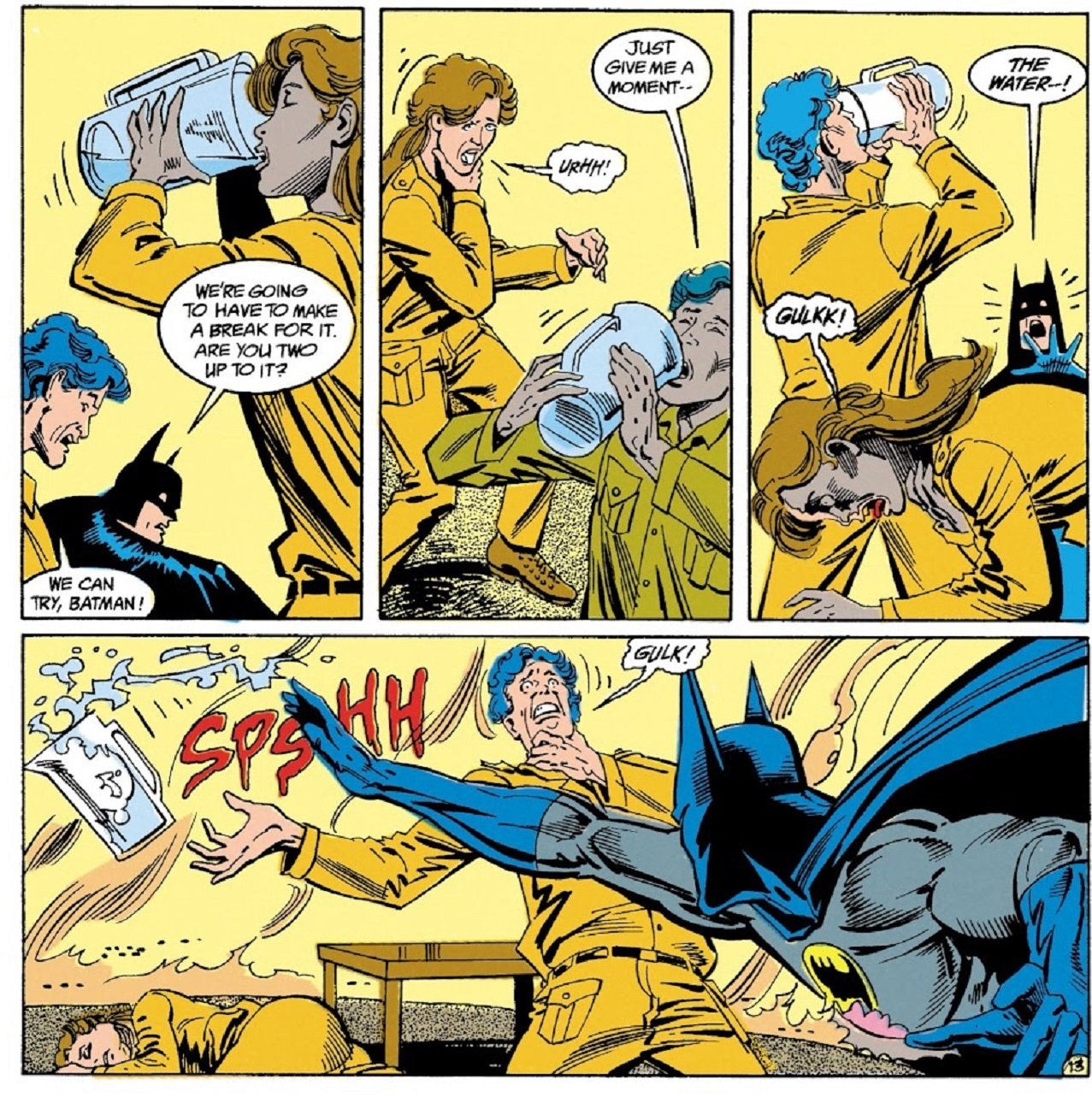 Tragedy has always plagued the Batman family, and Tim Drake found that he couldn’t escape it in 1990's Detective Comics #621 (written by Alan Grant and penciled by Norm Breyfogle). When the Robin-in-training discovered his parents had been kidnapped, the Dark Knight worked tirelessly to rescue them. Batman had hoped he could spare Tim from losing his parents as Jason Todd and Dick Grayson had before him, but the voodoo-themed Obeah Man had other plans. Although Batman was able to free the Drakes, the Obeah Man had the last laugh, as Tim’s parents drank some nearby water he'd poisoned. When Batman realized the danger, he wasn’t fast enough to save Janet Drake. The loss of his mother hit Tim hard, stripping him of his innocence and making him more determined than ever to become Robin. The fallout from Janet’s death was felt for years. Jack struggled to raise his son as a single father, and her murder continued to haunt Tim’s nightmares... 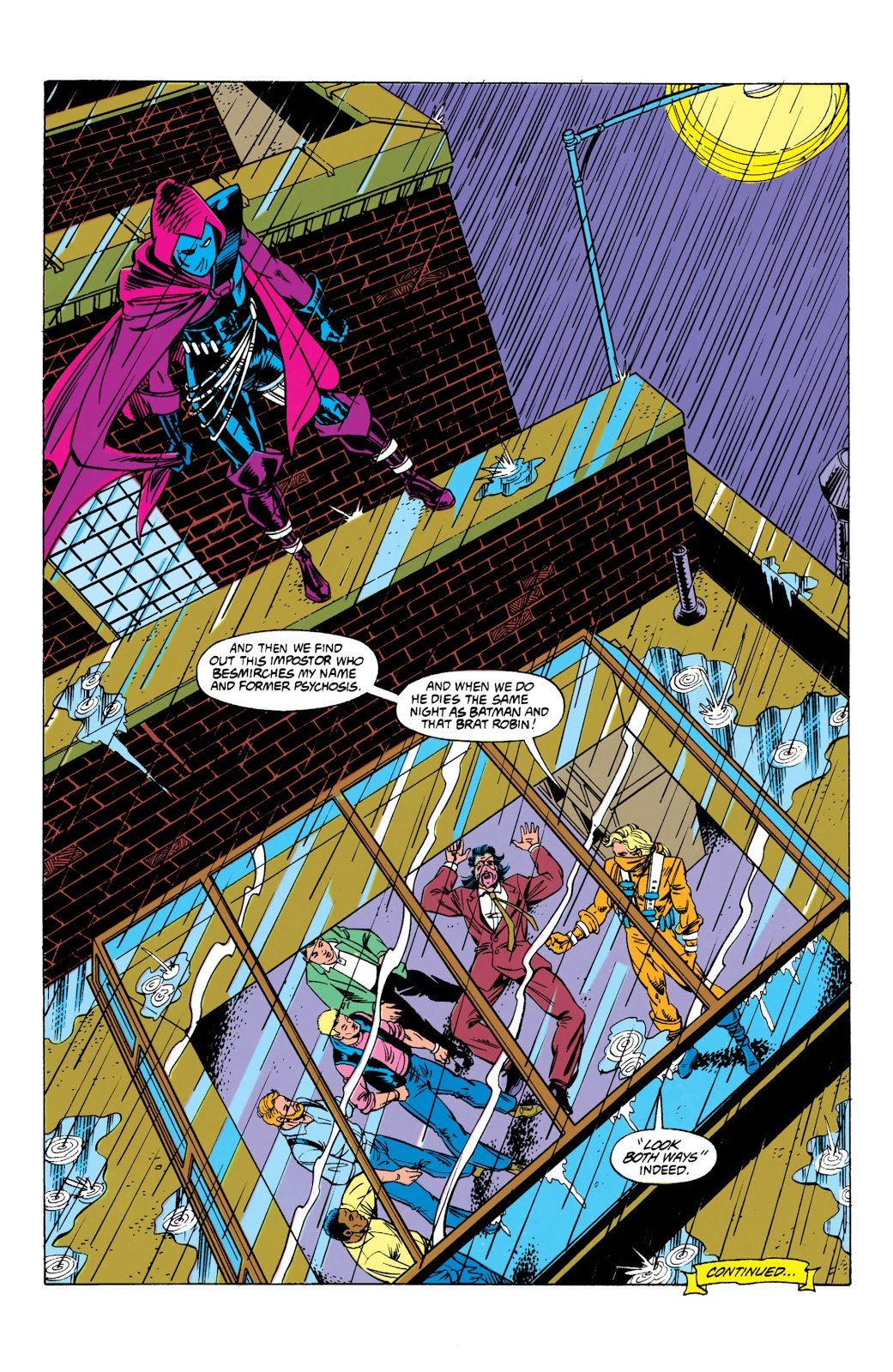 A new vigilante was introduced in 1992's Detective Comics #647 (written by Chuck Dixon and penciled by Tom Lyle), and she would go on to become one of the most important members of the Batman family. When the Cluemaster decided to drop his clue motif, a mysterious hooded vigilante sought to sabotage his plans by sending “spoilers” for his upcoming crimes to the Gotham City Police Department. Calling herself the Spoiler, the young crime fighter was revealed to be Cluemaster’s daughter Stephanie Brown. The story proved popular with fans, and Spoiler became a regular supporting character in Robin’s solo series. Stephanie would later serve as a substitute Robin during one of Tim’s absences, and had her own tenure as Batgirl. 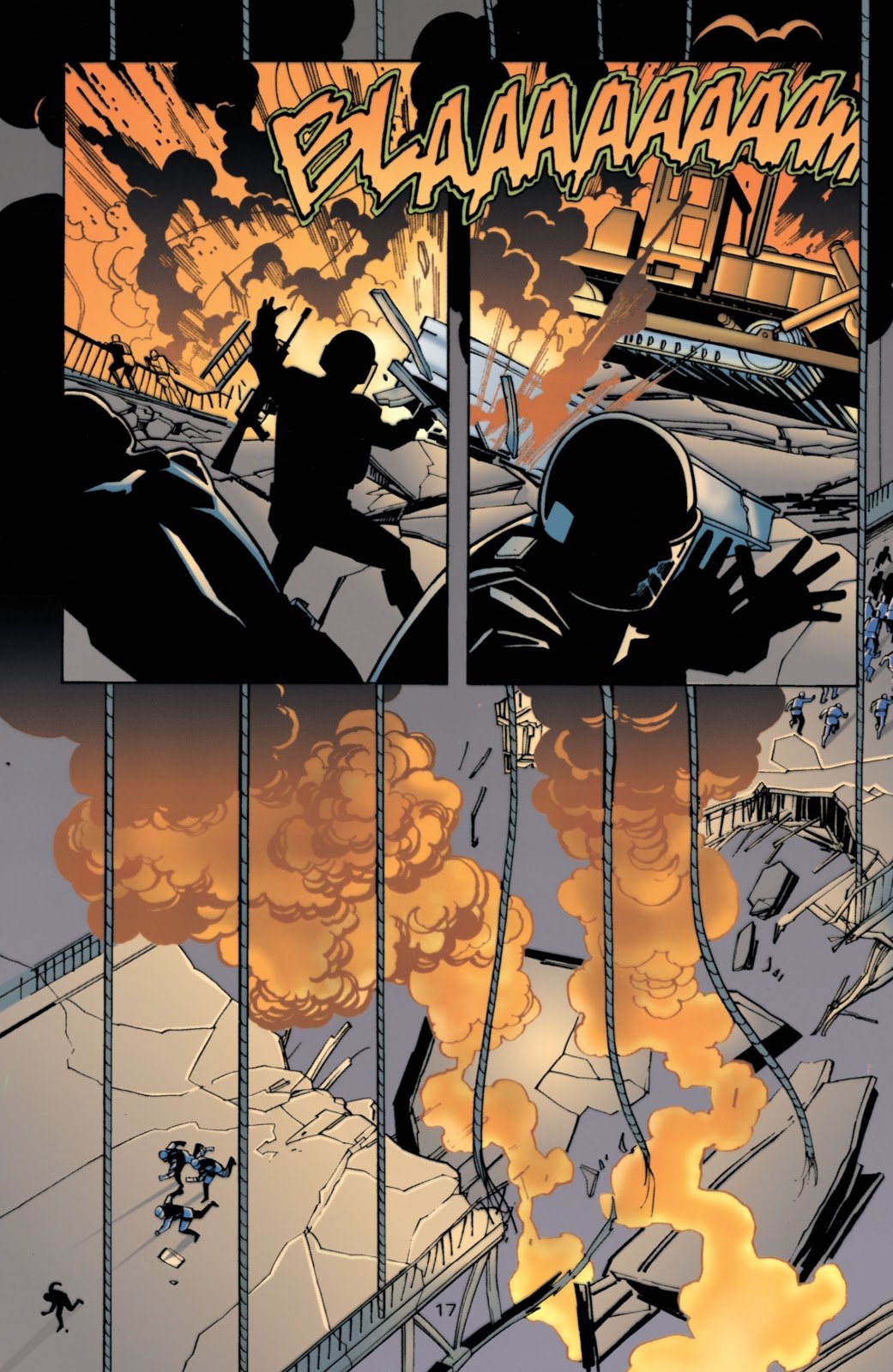 Gotham City’s darkest chapter began in 1999's Detective Comics #729 (written by Chuck Dixon and penciled by William Rosado) when the bridges to the city were destroyed, and the territory was officially declared a "No Man’s Land." A deadly plague had recently swept through Gotham, followed by a devastating earthquake that destroyed much of the city’s infrastructure. Despite Bruce Wayne’s pleas to Congress, the government voted to abandon Gotham. Detective Comics #729 proved to be a huge turning point for the Batman family, and set up the epic "No Man’s Land" crossover event. It would eventually inspire Christopher Nolan's The Dark Knight Rises, as well as the current season of TV's Gotham. 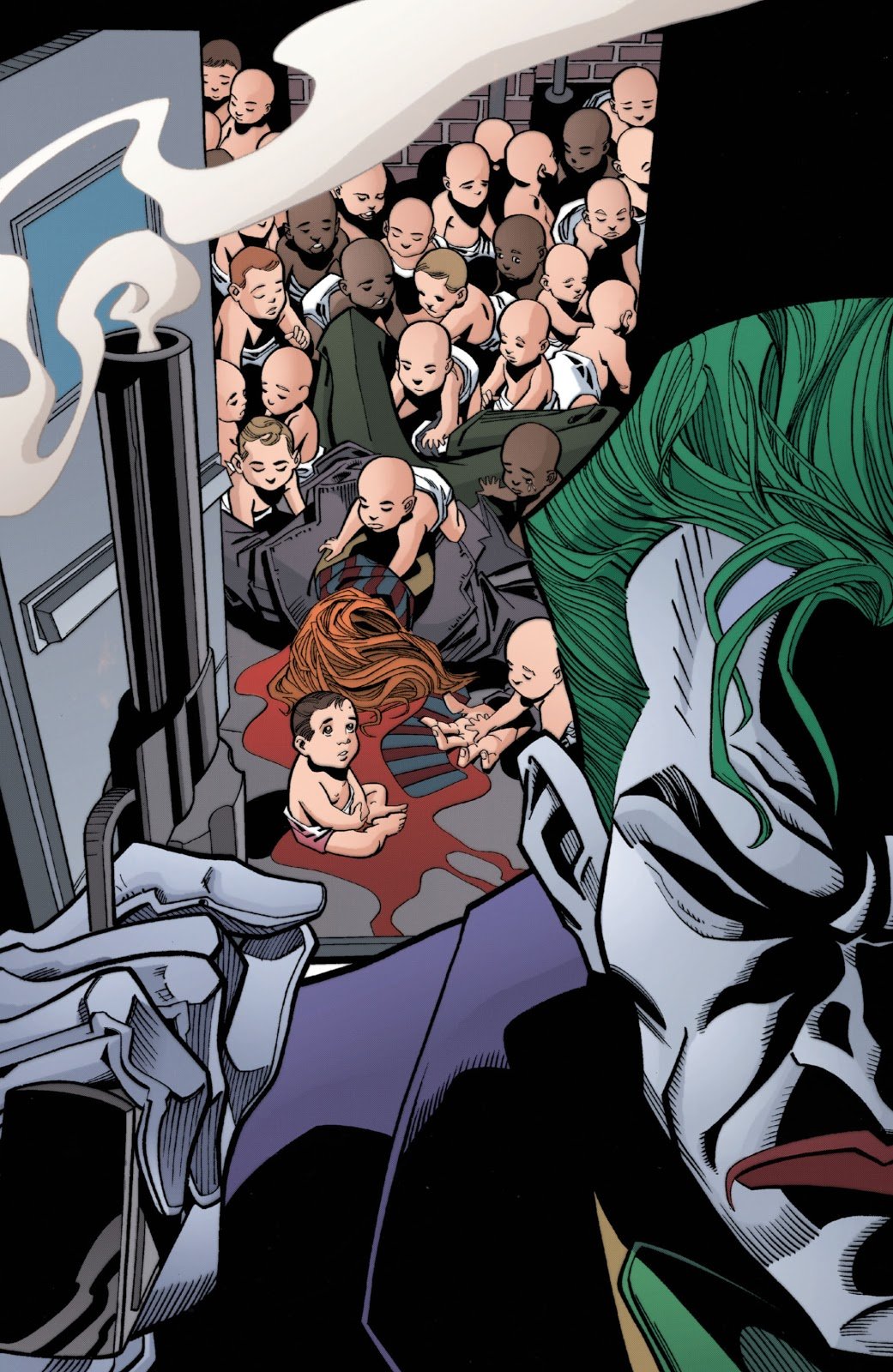 Tragedy struck the Gotham City Police Department in 2000's Detective Comics #741 (written by Greg Rucka and Devin Grayson, penciled by Damion Scott and Dale Eaglesham). In the final days of the "No Man’s Land" storyline, the Joker had taken Gotham’s babies hostage. The Batman family and the GCPD searched for the Clown Prince of Crime and his captives, little realizing he was hiding in the police department the whole time. When Jim Gordon’s wife Sarah Essen returned to the station to replace her radio, she heroically confronted the Joker on her own. Sarah dropped her gun to save one of the babies, and the Joker fatally shot her. Jim was enraged and Batman had to talk his friend out of ending the Joker’s life. Sarah’s sacrifice was remembered for years to come, and this chilling moment remains one of the most tragic scenes ever depicted in a Batman comic. 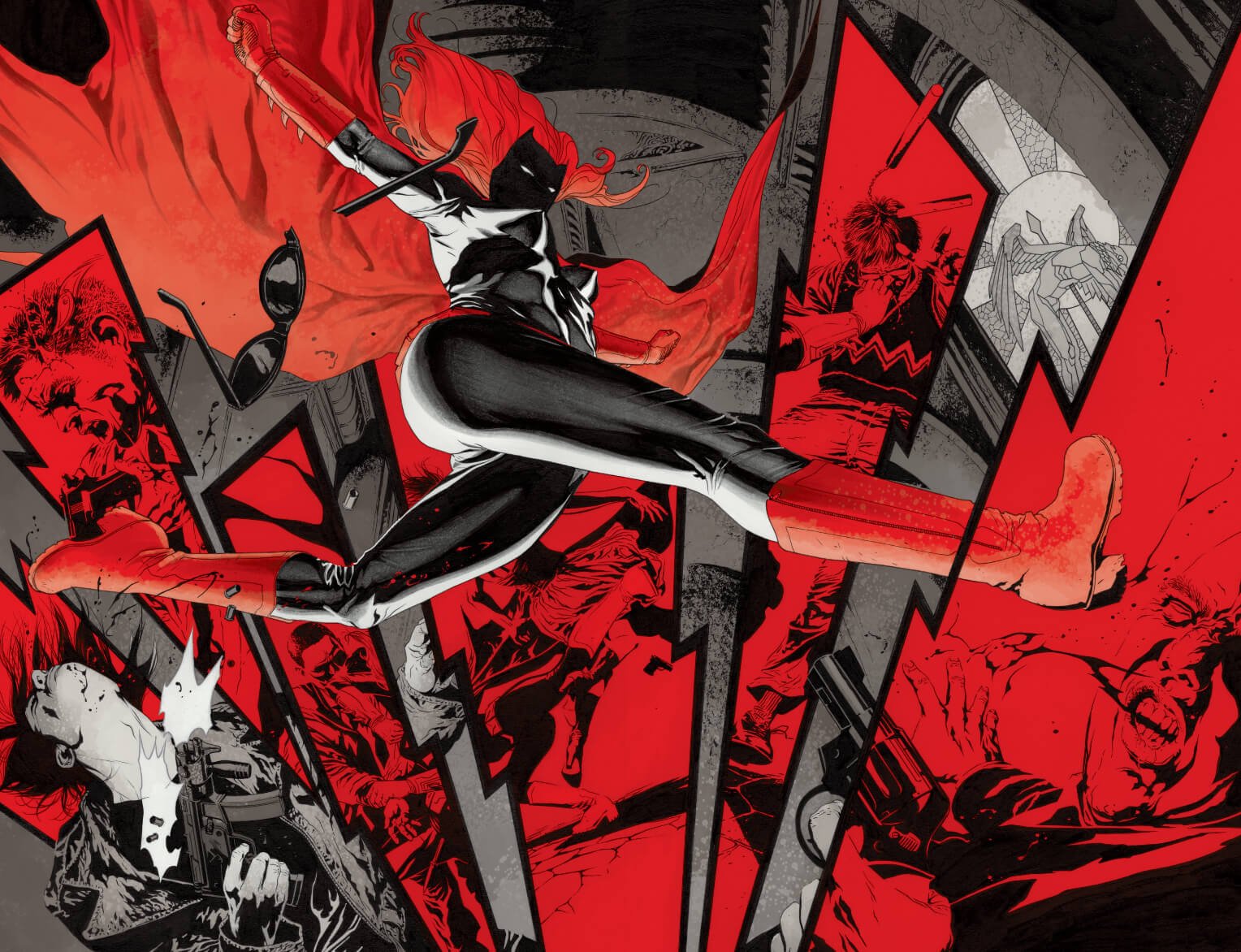 2009's Detective Comics #854 (written by Greg Rucka, penciled by J.H. Williams III) and Cully Hamner) may not be Kate Kane’s first appearance as Batwoman, but this issue radically reenvisoned her as a military-trained, openly gay heiress inspired by Batman's battle against crime. After the events of the "Batman R.I.P." storyline, the Batman titles went through a revamp. Since Bruce Wayne was absent (and believed dead), Batwoman took over Detective Comics as the lead feature! In this storyline, Kate’s father Jacob Kane is introduced and Batwoman faces Alice, a Lewis Carroll-inspired villain with secret ties to the Kane family... Brought to life by the eye-popping artwork of Williams, Rucka's Batwoman storyline (later collected as "Elegy") is nothing less than a masterpiece. 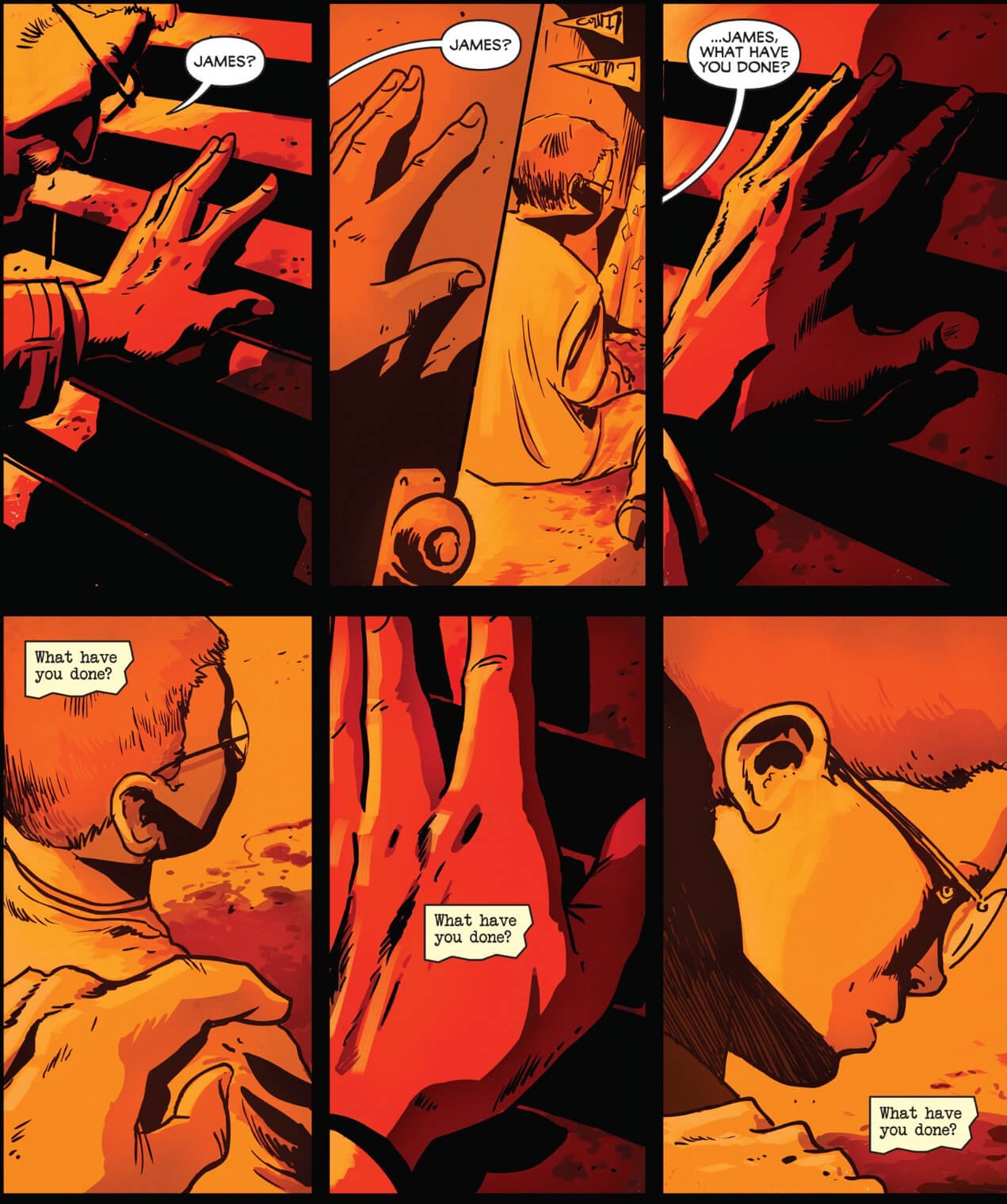 In 2011's Detective Comics #871 (written by Scott Snyder, penciled by Jock and Francesco Francavilla) readers learned who, out of all the villains in Gotham City, Commision Jim Gordon fears the most. When a local aviary is vandalized, Jim is horrified to see his son James Jr. on the security camera. Gordon’s son has had a history of sociopathic behavior, and bad things seem to happen when he’s around. Jim confronts his son, but James Jr. insists his medications have kept his violent tendencies under control. As the "Black Mirror" storyline progresses, James Jr.’s mind games bring unspeakable horror to the Batman Family. Detective Comics #871 is also notable for being writer Scott Snyder’s first Batman story, beginning the writer’s much-praised run on the character.

Face Off with the Joker 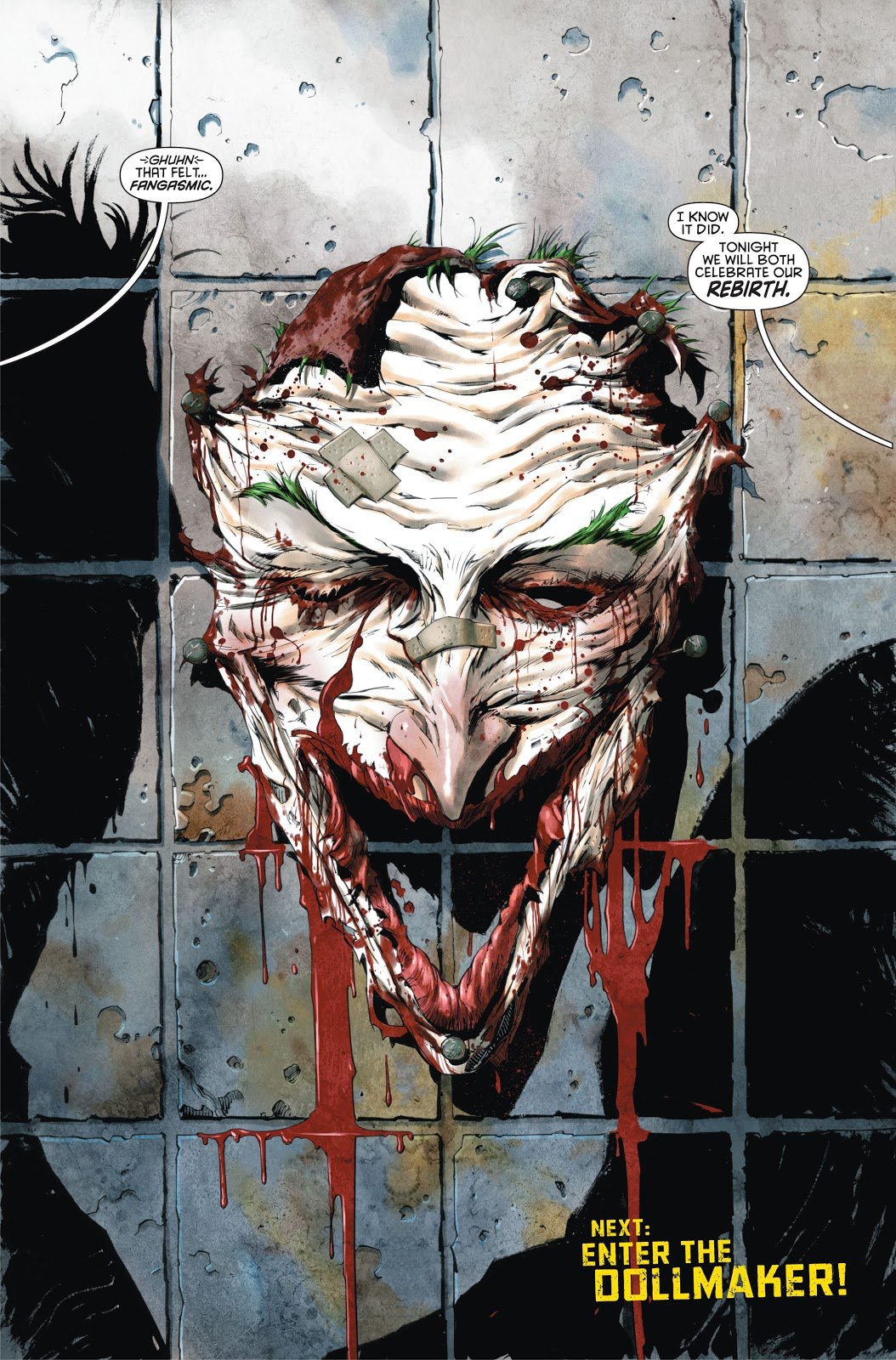 In DC’s line-wide New 52 reimagining, Detective Comics was temporarily renumbered. 2011's Detective Comics (vol. 2) #1 (written and penciled by Tony Daniel) kicked the new volume off with a gruesome bang by having the Joker remove his own face. This issue set the stage for the next few years of Joker storylines and introduced the Dollmaker, a mad villain who views surgery as a game. The cliffhanger image of the Clown Prince’s bloody face hanging on Arkham’s wall became one of the most iconic images of the New 52 and signified the Joker’s upcoming metamorphosis. 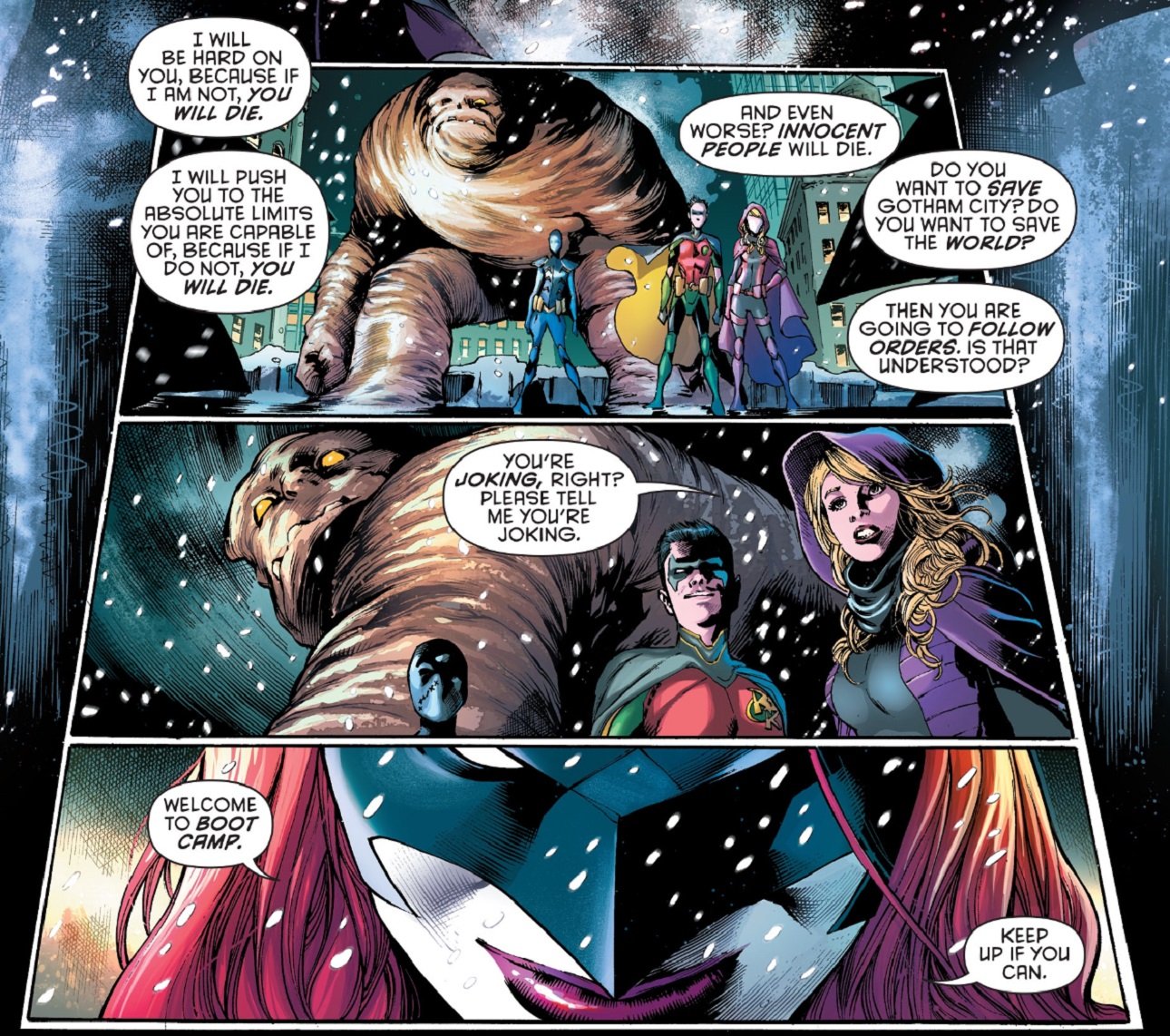 In 2016's Detective Comics #934 (written by James Tynion IV and penciled by Eddy Barrows), the series returned to its original volumes numbering, and began its DC Rebirth era. This new phase of 'Tec started with Batman reconsidering his approach to crime-fighting, as he recruited Batwoman to run a “boot camp” for Gotham’s heroes. In a moment of vulnerability, Bruce revealed his secret identity to Batwoman, who admitted she had figured it out a year ago. Batman and Batwoman’s new team consisted of Red Robin, Spoiler, Orphan and a newly reformed Clayface, seeking redemption for his past crimes. In keeping with DC Rebirth’s theme of legacy, the team’s roster was a perfect celebration of Detective Comics history while looking towards its future...

What’s your favorite issue of Detective Comics? Let us know in our Community!