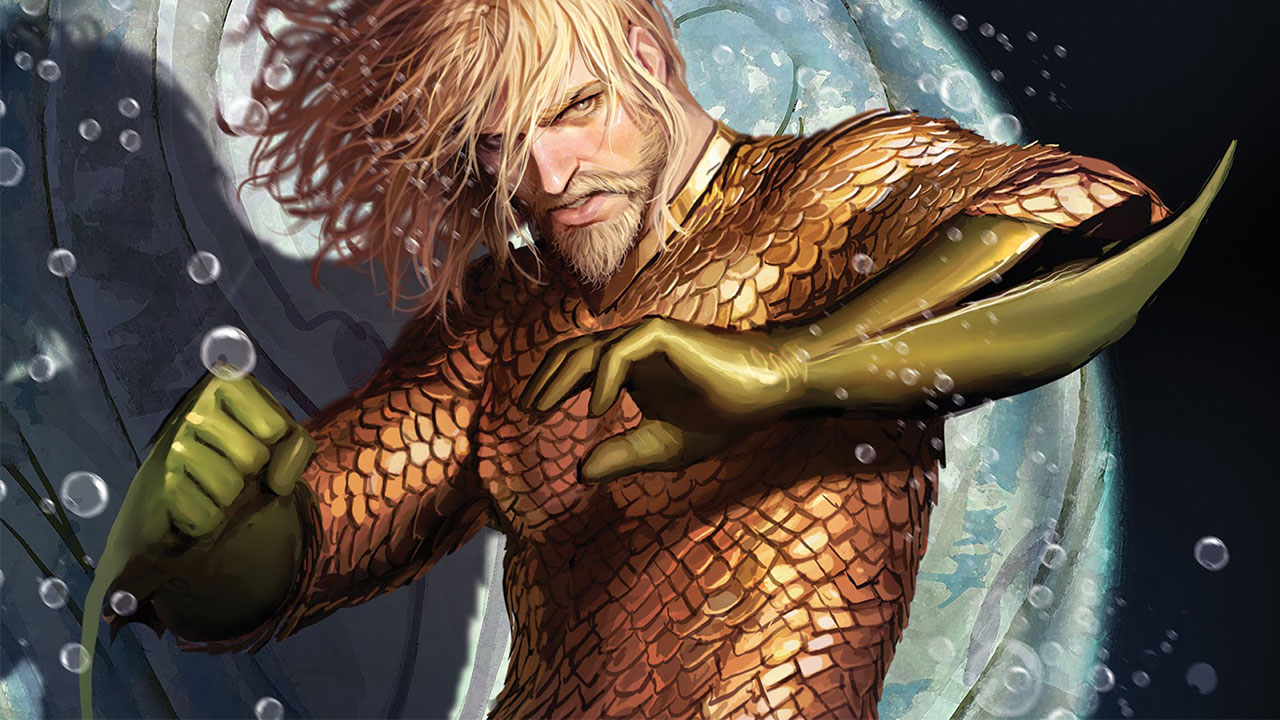 From the bottoms of the ocean to the sands of the surface world, Aquaman has thrilled DC readers with his adventures since his Golden Age debut. Throughout his adventurous history, he’s graced the covers of some awesome comics! Here are 10 of the best... 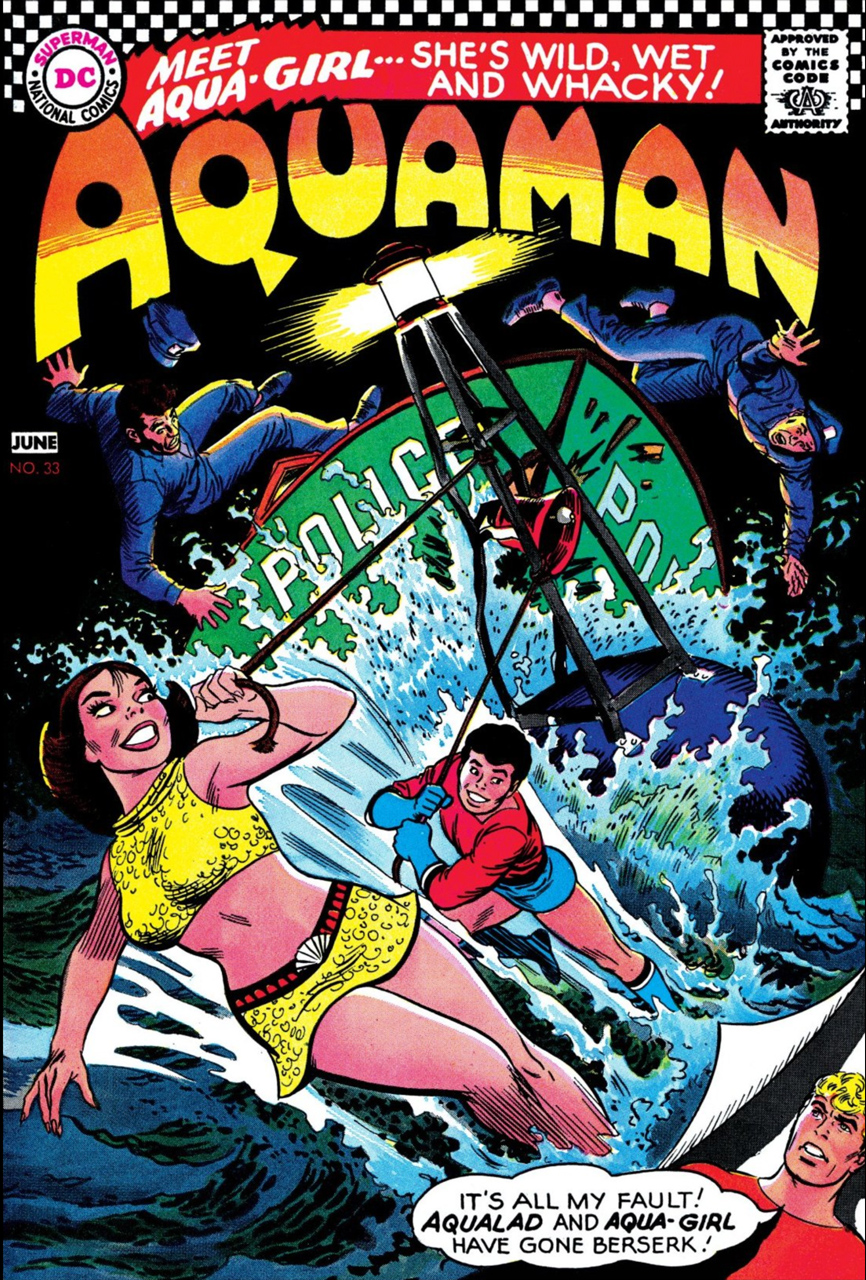 The cover of 1967's Aquaman #33 (written by Bob Haney, cover and interior by Nick Cardy) that just screams “Silver Age," in the best sense of the words. The cover oozes all the upbeat fun that the era had. We’re presented with an image of Aqualad and Aquagirl causing mischief while sporting goofy teenage smiles. The waves are flying, the policemen are falling, and all Aquaman can do is look on and say, “It’s all my fault! Aqualad and Aqua-Girl have gone beserk!" And we don't doubt it when the cover promises us that the new character of Aquagirl is “wild, wet and wacky”. It's the kind of glee you could only find in a 1960s DC comic. 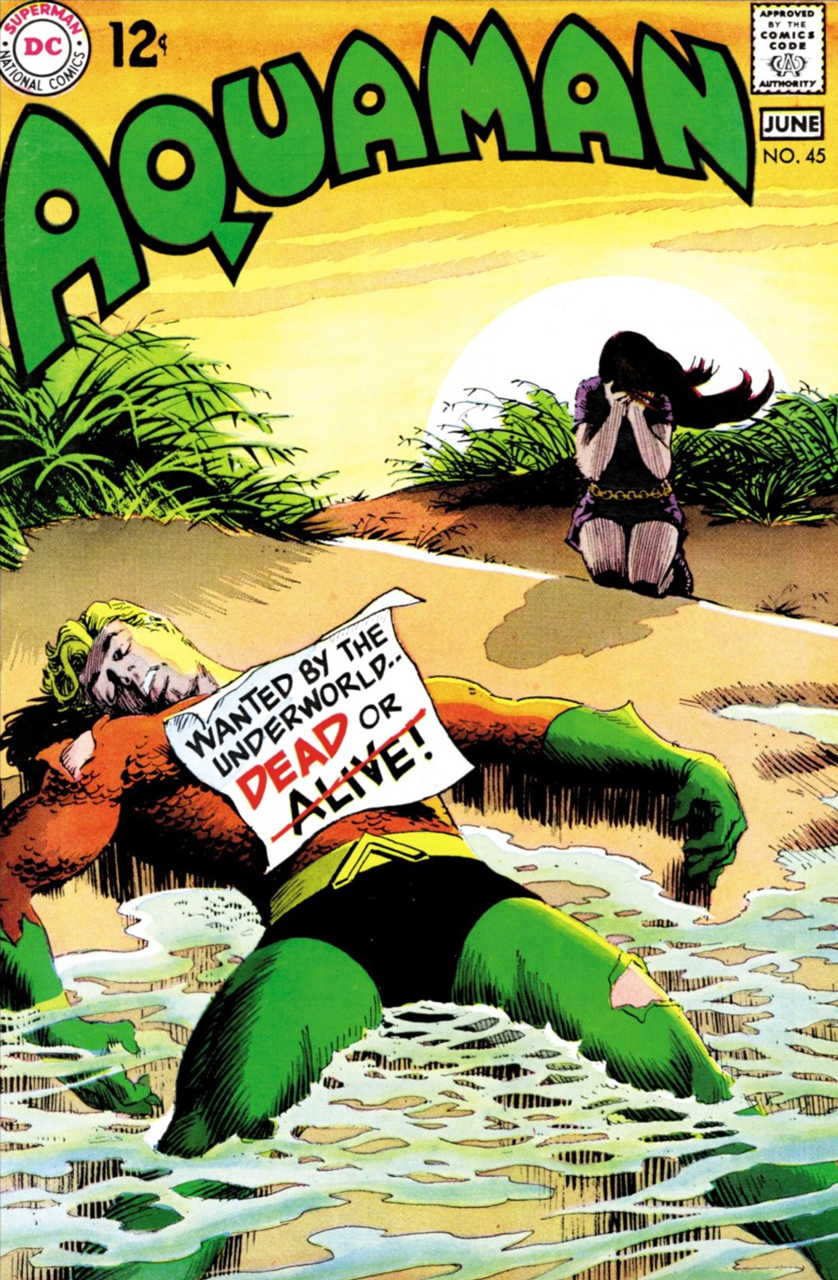 The cover for Aquaman #45 (written by Steve Skeates and penciled by Jim Aparo with cover art by Nick Cardy, read Aquaman #45 here) is an iconic classic from the Bronze Age. The year was 1969, and DC Comics was starting to move in a different direction by experimenting with some of their heroes. Instead of fighting undersea wizards, this story found Aquaman out of the ocean and up against the underworld. The cover presents a defeated Aquaman laying on the shore of the beach and mourned by a crying girl. The sun setting sun gives the scene some interesting lighting, and leaves readers curious how Aquaman ever got into this situation. Yet it's just one of the many unforgettable covers drawn by the great Silver Age artist Nick Cardy throughout his career. 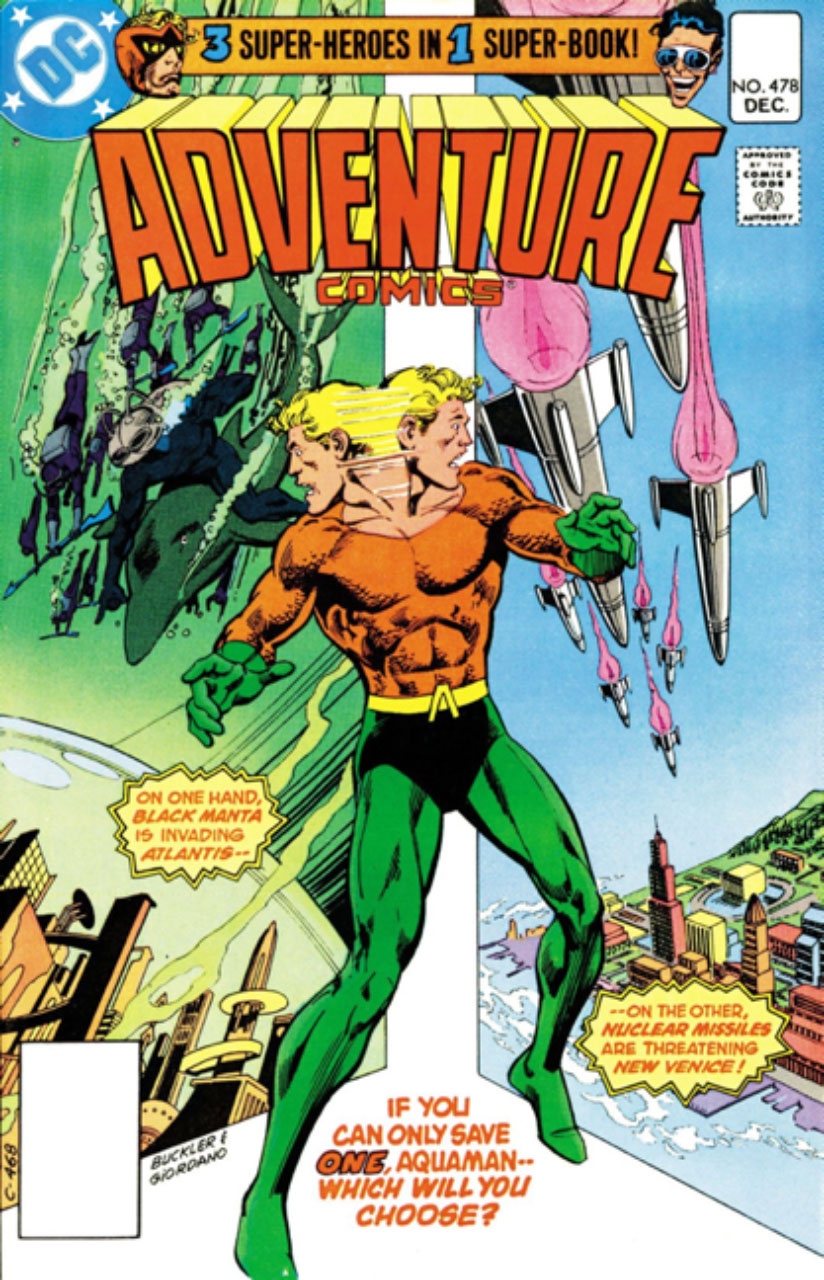 For much of Aquaman’s history, he’s been a hero torn between two worlds. It’s easy to forget that, while he’s fighting on land with the Justice League, he has an entire kingdom underwater that depends on him. The cover to Adventure Comics #478 (written by J.M. DeMatteis, penciled by Dick Giordano, cover art by Rich Buckler, Dick Giordano and Tatjana Wood) is one of the best visual representations of that struggle. Nuclear missiles are heading towards New Venice, while Black Manta and his army are invading Atlantis, and Aquaman is the only one who can stop both crises! His look of horror generates immediate empathy. Does he prevail? Of course! He’s Aquaman. 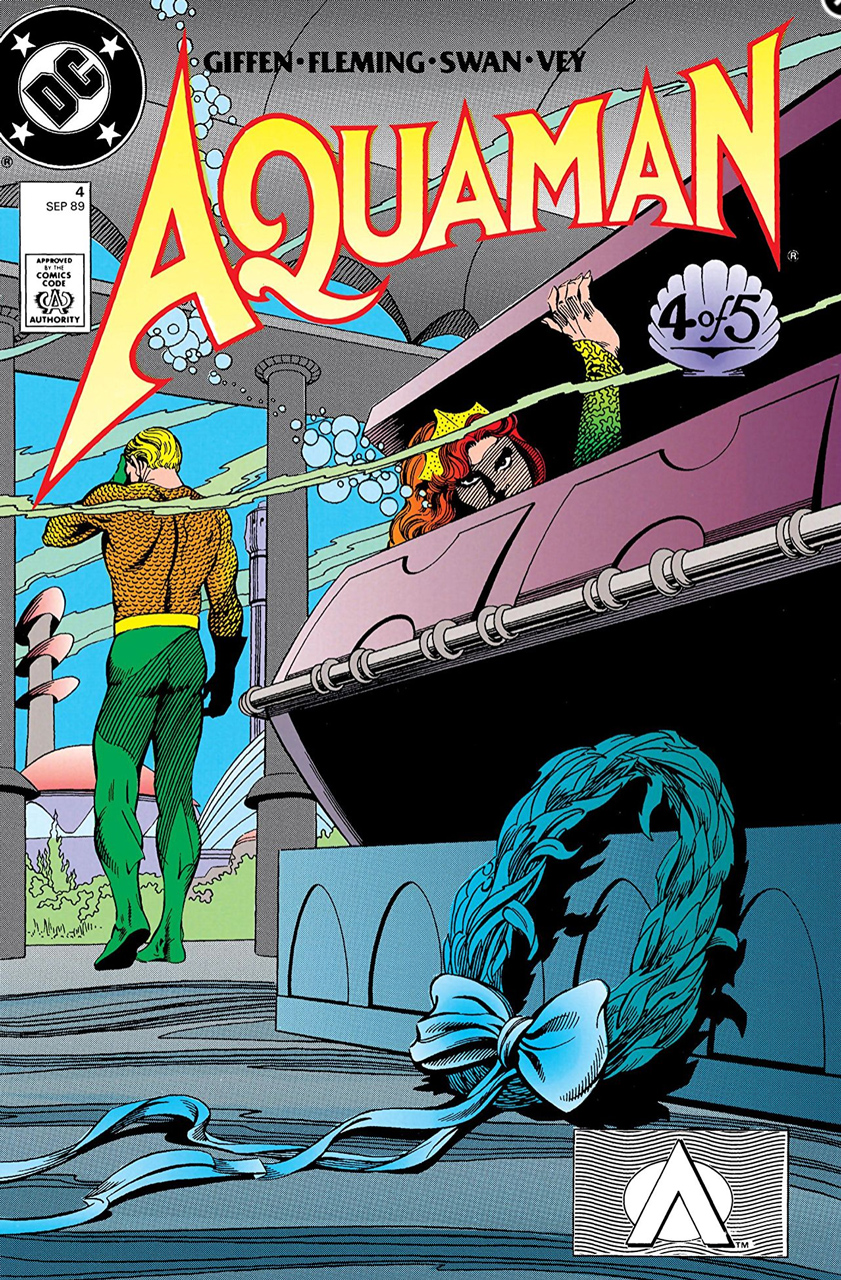 Arthur and Mera’s marriage had fallen on hard times by 1989's Aquaman #4 (written by Keith Giffen, interior and cover by Curt Swan). In the previous issue, Mera, in a deteriorating mental state, had violently attacked her husband with the intention of killing him. Aquaman accidentally impaled his wife while defending himself and believed her to be dead. As this cover shows, Mera (thanks to her unique Xebel biology) was far from dead. As she’s eerily rising from her coffin, her face remains in shadows while the fury in her eyes speaks volumes. Aquaman’s back is turned, leaving him unaware of the shock he’s about to receive… But the readers know, and that makes this cover all the more chilling. 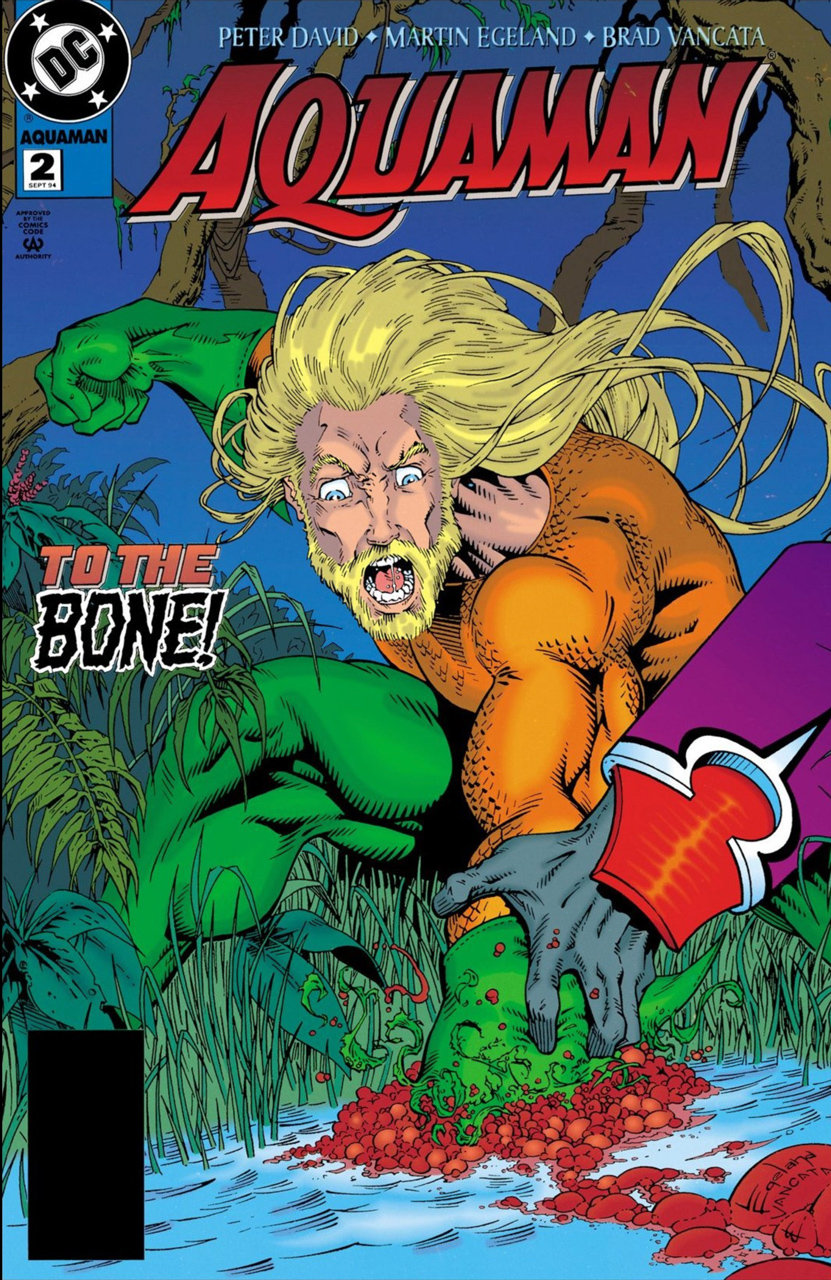 When writer Peter David kicked off his legendary Aquaman run, readers quickly learned he wasn’t playing around! The cover to 1994's Aquaman #2 (written by David, interior and cover by Marty Egeland and Brad Vancata, read Aquaman #2 here) showed fans just how high the stakes were, as they saw the sea king lose his hand to a pool of piranha. This cover was not a fake-out, and the moment carried real consequences for years. If you ask any DC reader about Aquaman in the 1990s, the loss of his hand will be one of the first things they mention. This cover shows that moment in all of it’s horrifying glory. 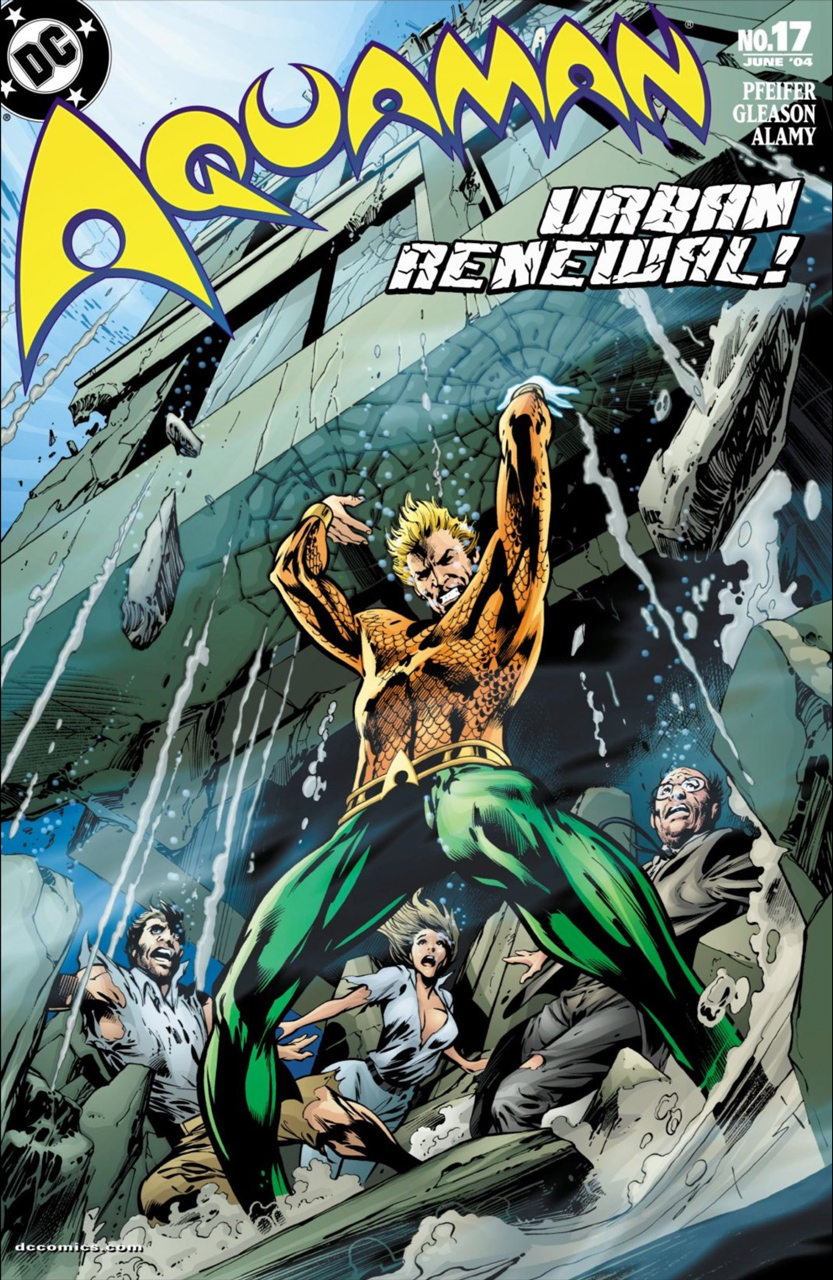 Arthur’s strength is on full display in the cover of 2004's Aquaman #17 (written by Will Pfeifer, penciled by Patrick Gleason, cover by Alan Davis). The city of San Diego has sunk, and Aquaman heroically lifts buildings over his head in order to free the survivors. The struggle is beautifully captured in his face, as the impact of his hands on the building clearly illustrate the difficulty of his task. It’s impossible not to respect Aquaman a little bit more after seeing this cover. 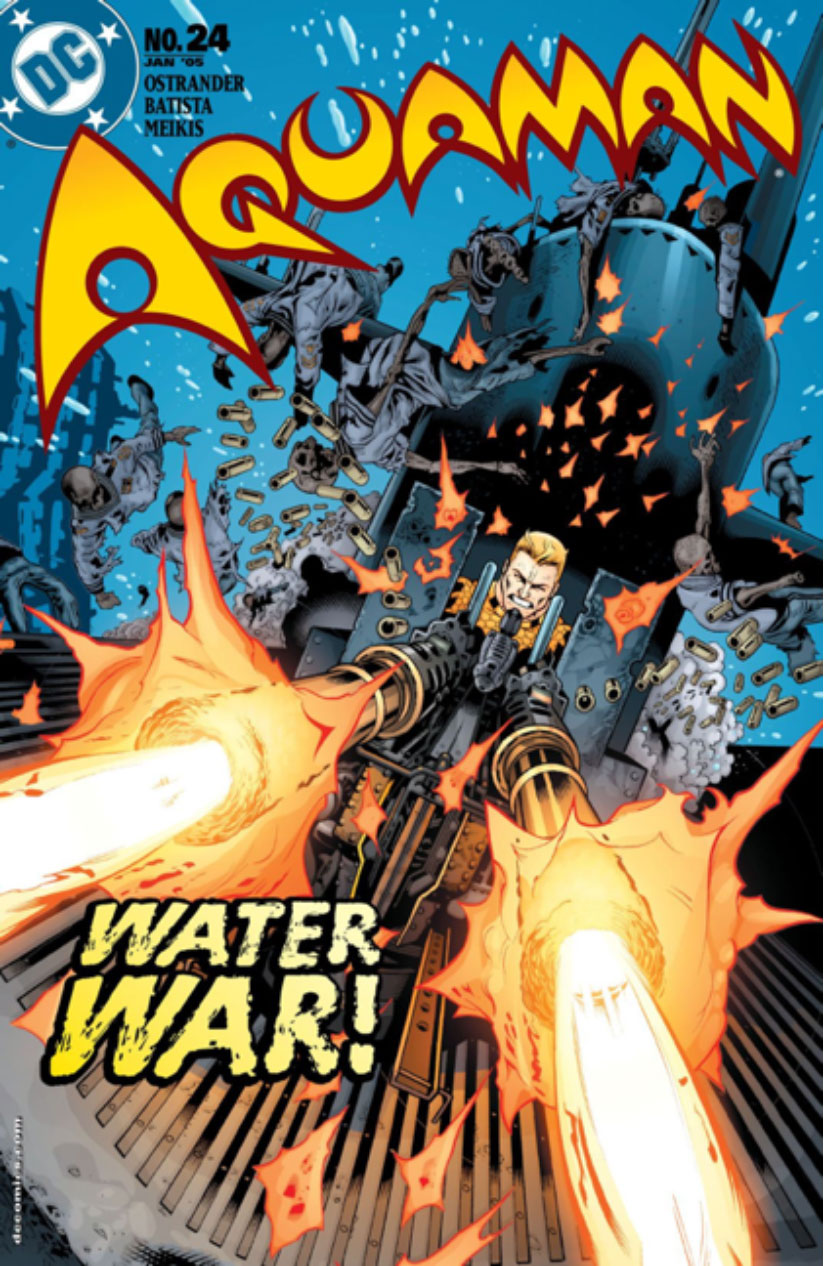 Some of the best covers are the ones where Arthur is taken out of his element, and 2005's Aquaman #24 (written by John Ostrander, penciled by Chris Batista, cover by Patrick Gleason) is no exception. Here, he commands a war machine and lets loose a hail of gunfire! It’s daring, it’s exciting, and there probably isn’t another Aquaman cover quite like it. 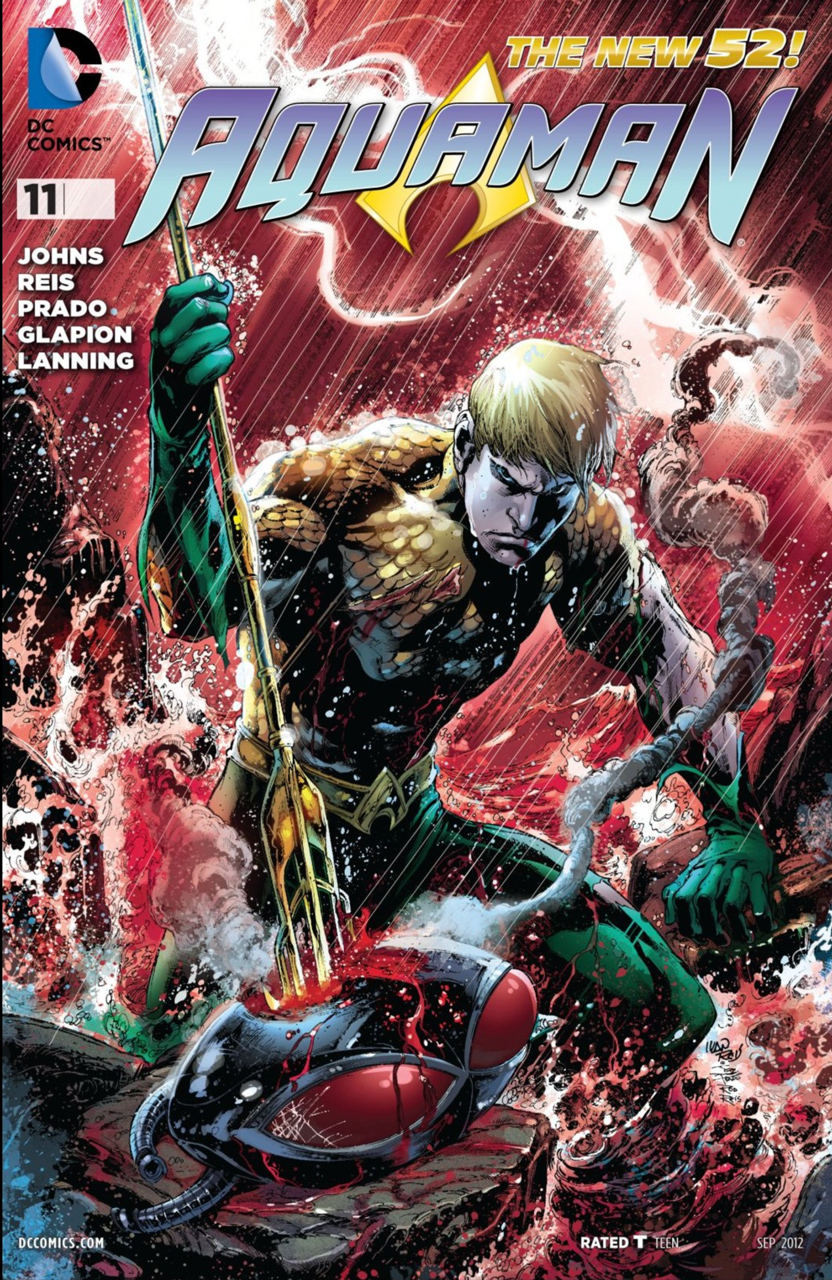 In 2012's Aquaman #11 (written by Geoff Johns, interior and cover art by Ivan Reis), Aquaman and his former team the Others went up against Black Manta, and the cover let us know that Arthur wouldn’t be taking any prisoners! From the dark skies and thunderstorm to the blood soaking the ocean, Ivan Reis draws a violent and scary place, ruled by someone even more terrifying. Aquaman’s trident piercing Manta’s helmet should tell you everything you need to know.

Aquaman and the Others #11 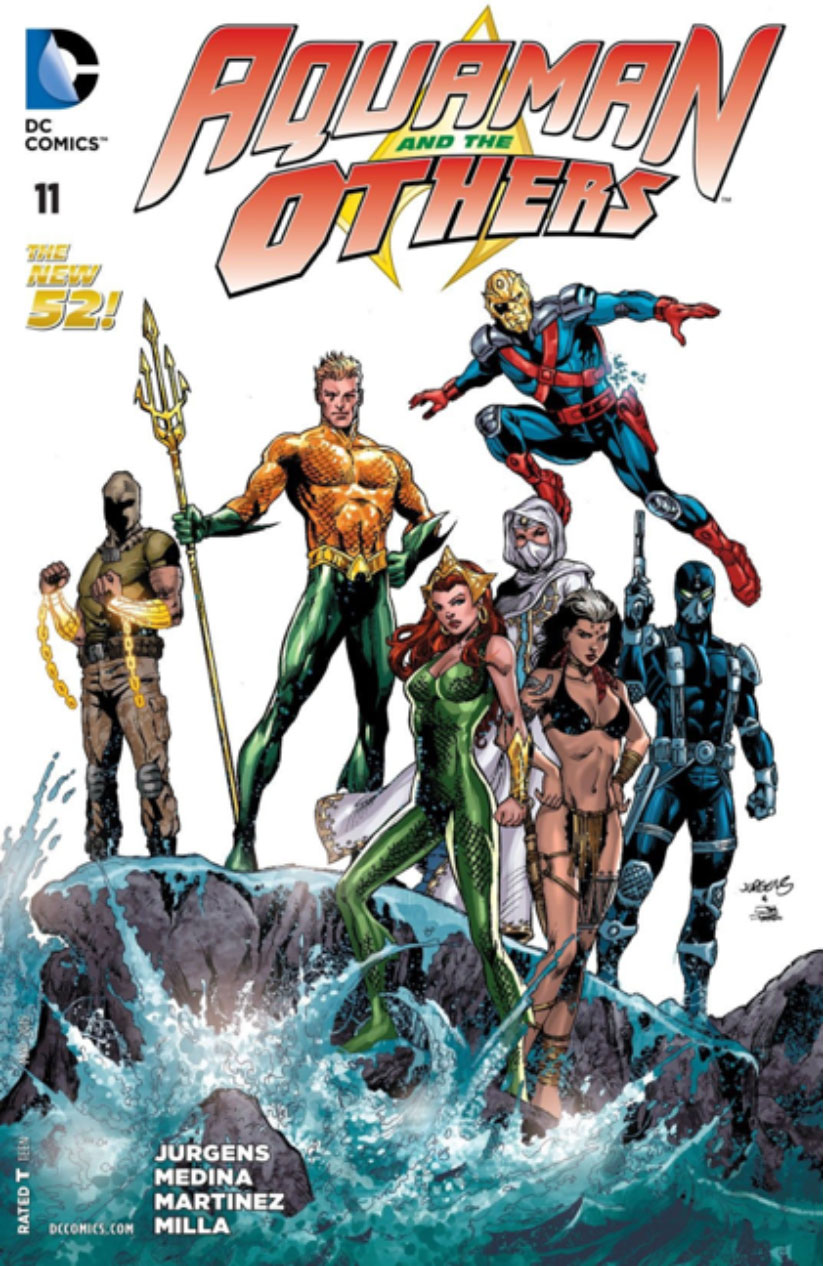 And speaking of the Others... After their launch in the pages of Aquaman’s New 52 title, the team received their own comic. The final issue of the series, Aquaman and the Others #11 (story and cover by Dan Jurgens, interior by Lan Medina, read Aquaman and the Others #11 here), features a dynamic image of the group standing triumphantly on an islet. The waves are crashing, the characters are intriguing, and artist Dan Jurgens is firing on all cylinders. 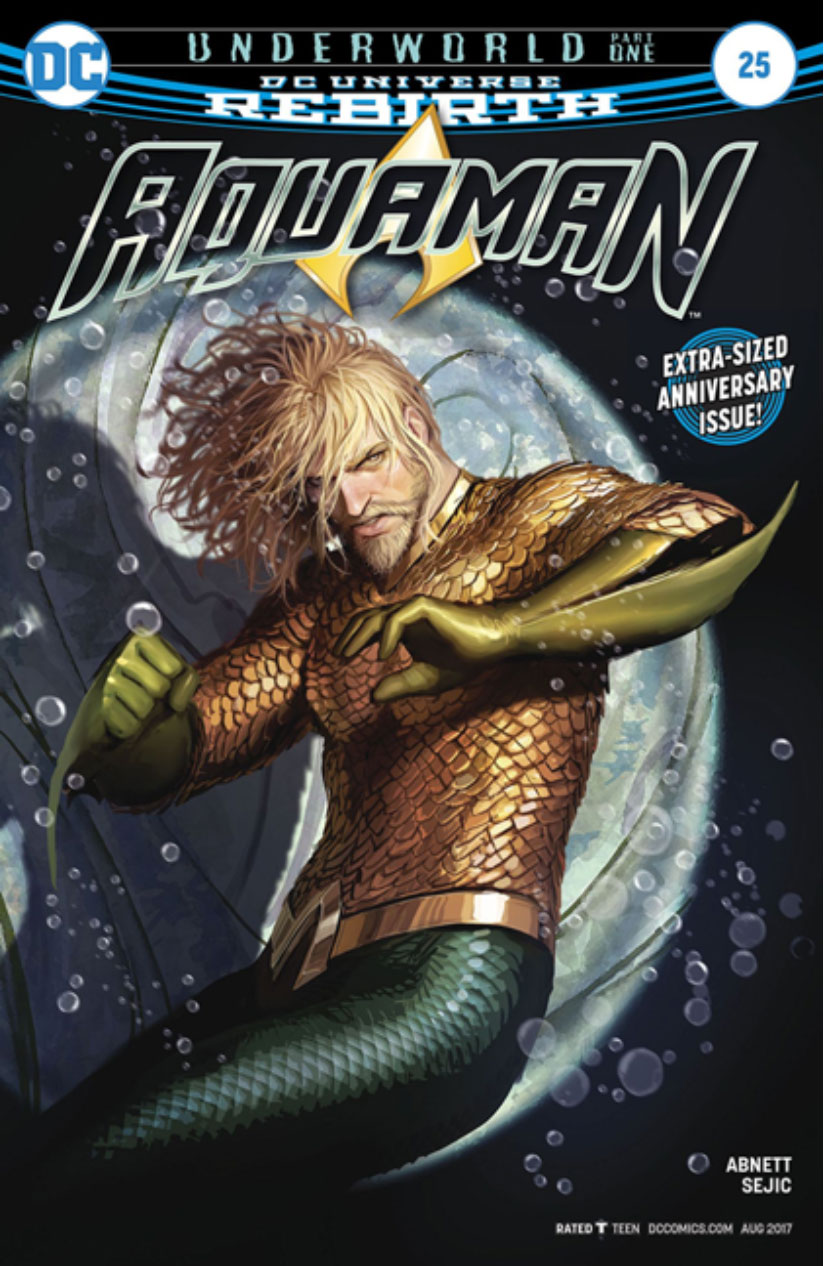 The Rebirth era's Aquaman #25 (written by Dan Abnett, interior and cover by Stjepan Sejic) has one of the most badass images of the King of the Seas ever! Arthur is photorealistic, while the cover captures what's great about the Silver Age, Peter David's '90s era, and even Jason Momoa at the same time! Not only does Aquaman look cool, but there are some great subtle touches by Sejic which remind readers this is an underwater environment. Aquaman’s hair floats in different directions, bubbles surround him, and the area that's out of the spotlight is in pure darkness. As colorful as Aquaman’s world can sometimes be, it’s easy to forget that the bottom of the ocean is an intense place. This cover makes Aquaman and his world look both fascinating and dangerous.

What's your favorite Aquaman cover? Let us know in our Community!