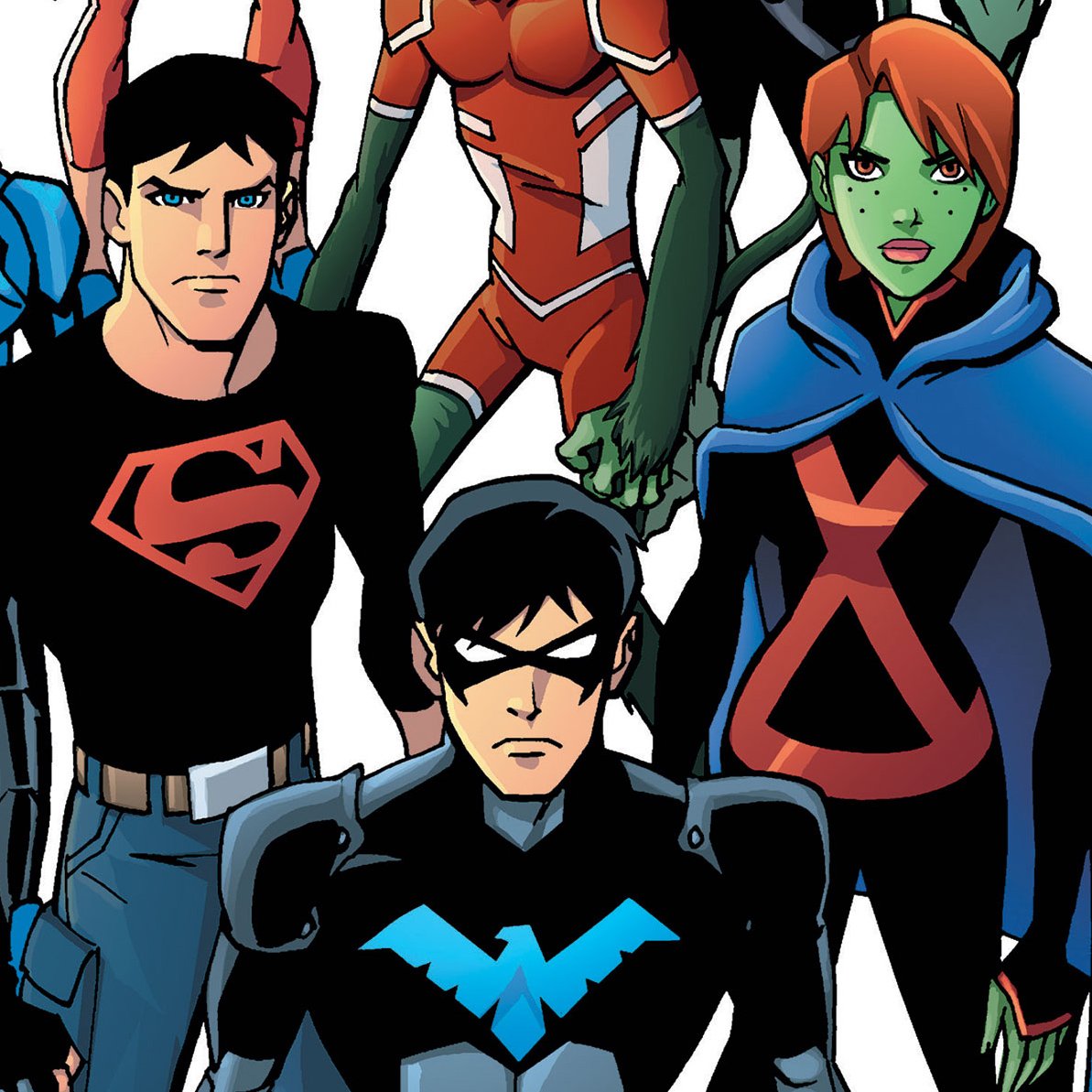 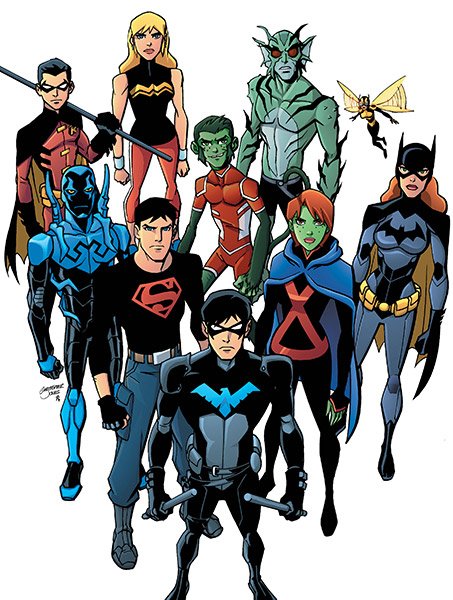 Before they were Teen Titans, Conner Kent, Tim Drake, Bart Allen, and their friends were the brightest young stars in the DC universe -- Young Justice. 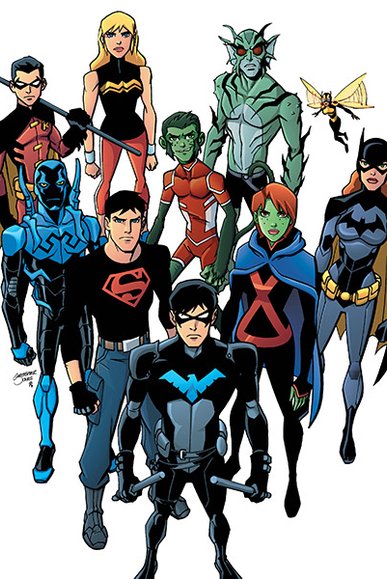 Before they were Teen Titans, Conner Kent, Tim Drake, Bart Allen, and their friends were the brightest young stars in the DC universe -- Young Justice.

Kids. Adults think they have it too easy. But there’s nothing easy about being a teenage superhero. Just ask the members of Young Justice. Along with the usual growing pains facing all teenagers, they’ve confronted some of the galaxy’s wickedest villains. All the while trying to prove themselves to their mentors in the Justice League.

But then, that’s why the team first banded together. After all, grown-ups have trouble understanding normal teenagers, let alone metahuman ones. So Robin, Kid Flash and Superboy were grateful to find in each other some friends who understood their unique situation.

While the roster of Young Justice swelled over the years, the team never lost sight of the fun in simply being young. 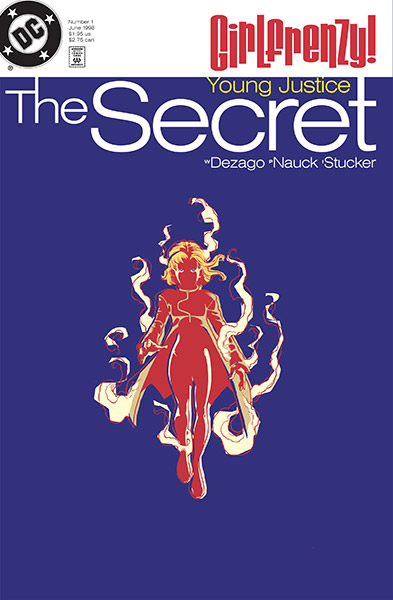 The three founding members of Young Justice—Tim Drake’s Robin (the third to partner with Batman), Bart Allen’s Impulse (a grandson of the Flash Barry Allen) and Kon-El’s Superboy (a half-clone of Superman)—first worked together when they teamed up to save the wraith-like Secret from the clandestine government agency known as the D.E.O. (Department of Extranormal Operations). Shortly afterward they united again, to save the world from a new Super-Villain named Bedlam; who’d used his godlike powers to banish Earth’s adult heroes to another world. The heroes then decided to form a team of their own.

They took up residence in the Justice League’s original mountain headquarters (dubbed “The Justice Cave”) in Happy Harbor, Rhode Island. But they accidentally awoke the dormant android Red Tornado, who would mentor/chaperone them in an effort to become more human. Referencing Freudian analysis in describing the trio, the Tornado called Impulse the id, Superboy the ego and Robin the superego. Soon after, the boys were joined by three girl heroes: the Secret (whose identity would remain a mystery for years), the second Wonder Girl (Cassandra “Cassie” Sandsmark) and the second Arrowette (Cissie King-Jones). Eventually, most every young hero in the DC Super Heroes Universe would join their ranks. 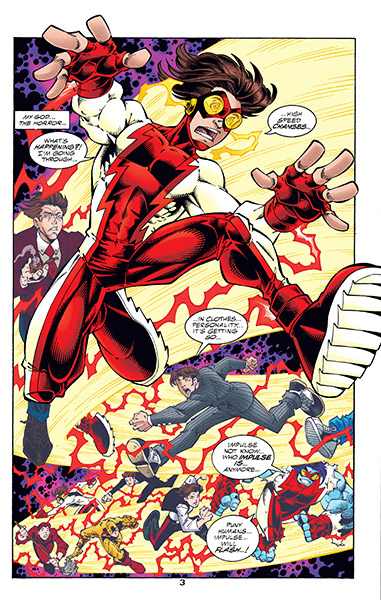 The original leader of Young Justice, Robin, possessed a genius-level intellect in addition to his martial arts and acrobatic skills. Superboy wielded a limited version of Superman’s powers. Impulse, like the Flash, had super-speed. The Secret held ethereal powers similar to those of the Spectre. Arrowette’s archery skills earned her an Olympic gold medal. And Wonder Girl possessed super-strength and speed, as well as invulnerability and the power of flight. 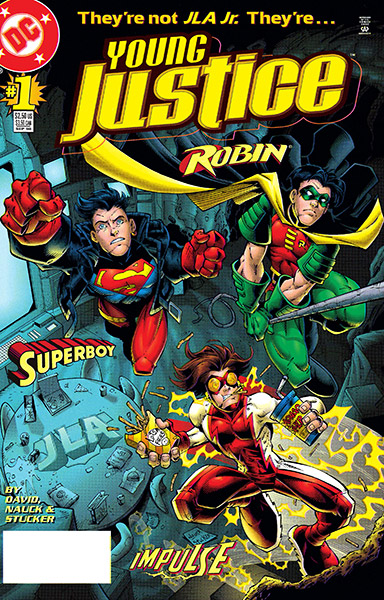 Young Justice first appeared in the one-shot YOUNG JUSTICE: THE SECRET #1 (1998), followed by the two-issue limited series JLA: WORLD WITHOUT GROWN-UPS (1998), in which the group was officially formed. In the first issue of their self-titled monthly comic, they received their name when reporter Ace Atchinson believed he heard Impulse refer to the group as “Young Justice,” when the hero said they were “young, but just us,” i.e. not a young version of the Justice League. Such comedy was typical for the title. More lighthearted than most of the contemporary DC Super Hero teams, Young Justice, in just their first issue, covered their headquarters in graffiti, fought the top-heavy villain called “The Mighty Endowed” and discovered their chief mode of transportation, the sentient, galaxy-cruising Super-Cycle.

Their adventures would come to strain the fourth wall, but the team also found themselves in serious storylines. Their first extended tale saw the Red Tornado about to lose custody of his daughter after his wife entered a coma. Before Secret awakened Red Tornado’s wife, Young Justice helped him evade the authorities and fly off with his daughter. Coupled with Arrowette almost murdering a killer in cold blood, their actions fueled the public’s mistrust of young heroes, along with some apprehension on the part of the Justice League. A team of embittered, elderly former sidekicks, dubbed “Old Justice,” tried to capitalize on this mistrust by asking the government to disband Young Justice.

Arrowette blamed herself for the situation and quit the group, leaving her best friend Wonder Girl heartbroken. She was replaced by a new member, the agile acrobat and martial arts expert Empress, a.k.a. Anita Fite—the daughter of Young Justice’s frequent foe Donald Fite; an agent of the All-Purpose Enforcement Squad (A.P.E.S.).

Things started looking up for Young Justice in the Sins of Youth storyline. Here, the Justice League, Justice Society, Titans and Young Justice switched ages, with the adult heroes suddenly reduced to children and the kid heroes aged into adulthood. It was the result of a revenge plan spawned by Lex Luthor’s ex-wife, “The Contessa.” In their adult bodies, Young Justice ended up saving their more experienced counterparts, and turned the tide of public opinion by proving they’d someday mature into responsible grown-ups. Following Sins of Youth, the adult antihero Lobo remained a youngster. He joined Young Justice and became known as “Li’l Lobo.” 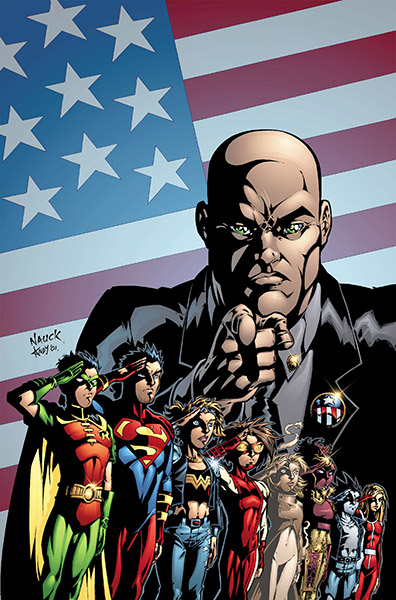 The Our Worlds at War storyline saw Young Justice end up on Apokolips. There, following the events of the JLA storyline Tower of Babel (in which the Justice League learned Batman didn’t completely trust his teammates), Superboy, Wonder Girl, Arrowette and Impulse became distrustful of Robin. Young Justice split in half, and experienced an atypically dark adventure. Those who remained loyal to Robin were captured and tortured by Granny Goodness while Darkseid tried to woo Secret to his side. Fortunately, the team escaped with the aid of an army of Li’l Lobo clones. Alas, the clones were killed with the exception of one—a teenaged version dubbed “Slobo,” who became the group’s mechanic.

Upon their return to Earth, Impulse and Robin quit the group. And the Secret partnered with Spectre, finally revealing her real name (Greta Hayes) and that her adoptive brother had killed her; rendering her a ghost and causing her to take on the role of a gatekeeper between life and death.

The team was then reunited, with Wonder Girl was appointed its leader and Robin its chief tactician. Empress learned her father was killed by the Baron Agua Sin Gaaz, her corrupt grandfather, who’d made the island nation of Zandia his home. A legion of teen heroes from across the DC Universe was henceforth recruited by Young Justice to invade Zandia and bring down the tyrant. When Empress arrived, she confronted her grandfather, who was prepared to kill her. But the original Arrowette (Cissie’s mother, Bonnie King-Jones) appeared and shot an arrow through his heart. At the conclusion of this storyline, Empress was left with two infant babies, her parents, reincarnated by her newly deceased grandfather.

In the team’s final extended storyline in their own monthly book, Secret learned her dad was on death row for murdering her brother. She asked her teammates for help in freeing him, but they refused. So she freed her father herself, earning her friends’ scorn. Secret then left Earth for Apokolips, where she allied herself with Darkseid. While preparing for battle with the two, Wonder Girl and Superboy began their long-teased relationship. When Secret attacked, Robin apologized, and Secret forgave him and her other teammates. Then Darkseid attacked, turning Slobo into a statue and stripping Secret of her powers, which granted her heart’s desire—to become an ordinary girl. 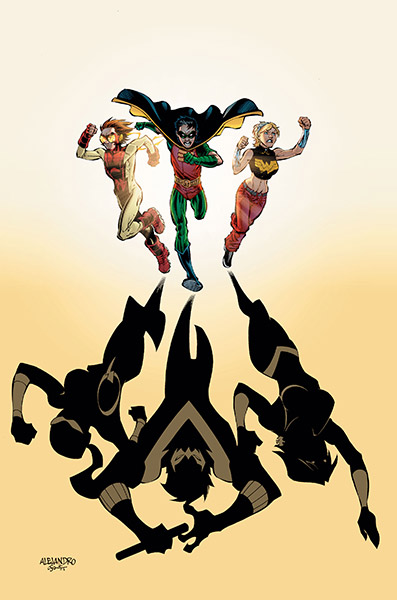 During a business meeting between the Titans and Young Justice, the teams were attacked by a berserk Brainiac-controlled robot named Indigo, landing half of each group in the hospital. The android then unleashed a robotic duplicate of Superman, which proceeded to kill Omen and Donna Troy—the original Wonder Girl and Cassie’s friend and mentor. In the aftermath of this battle, Young Justice disbanded…But Cyborg, Beast Boy, Starfire and Raven later decided to take the young heroes under their wings, and formed a new Teen Titans that same year.

After disbanding, the core members of Young Justice would eventually form a new version of the Teen Titans.