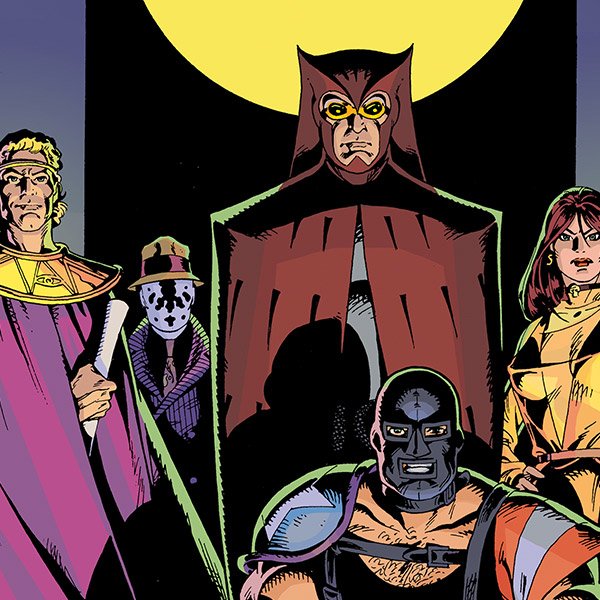 At the height of the cold war, a group of heroes and antiheroes act to prevent the Doomsday Clock from striking midnight. Who watches the Watchmen? 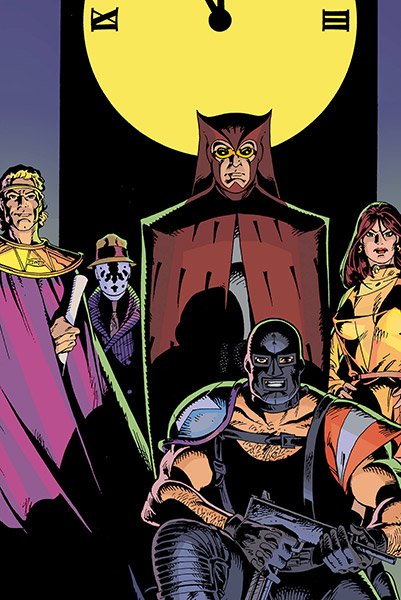 At the height of the cold war, a group of heroes and antiheroes act to prevent the Doomsday Clock from striking midnight. Who watches the Watchmen?

The universe of the Watchmen— an alternate Earth, populated by alternate DC Super Heroes—is a bleak and harrowing one.

The Watchmen story depicts an America that saw the rise and the fall of costumed vigilantes, as well as the birth of the first-ever metahuman, Dr. Manhattan—a nuclear-powered being, nearly omniscient and indestructible. It’s an unflinching account of all the things that could go wrong in a world inhabited by caped crusaders.

Rather than referring to an official team of superheroes, the name "Watchmen" refers to the quote "Who watches the watchmen?" And the Watchmen world is home to several different teams in various states of organization and disbandment, chiefly the Minutemen, a group of superheroes who operated predominantly in the 1940s. 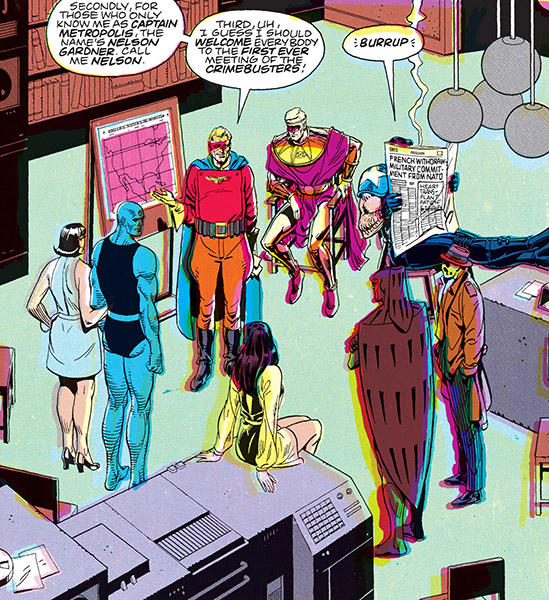 In the mid-1980s, a group of related but not formally organized superheroes followed in the footsteps of the Minutemen, a team of masked crime-fighters who largely worked in the 1940s and ’50s.

The Minutemen were among the first publicly recognized superheroes, though, as the years progressed, they each succumbed to the vices or the violence of their lifestyle, leaving the group in shambles. The Minutemen were made up of vigilantes known as Silk Spectre, the Silhouette, Dollar Bill, Hooded Justice, the Comedian, Mothman, Nite Owl and Captain Metropolis.

Later, the protégés of Nite Owl and Silk Spectre took up their mentors’ mantles, while the Comedian became a mercenary for hire. Nite Owl II and Silk Spectre II (the daughter of the original Silk Spectre) were joined in their new, unofficial team by Rorschach, Dr. Manhattan and Ozymandias.

Dr. Manhattan is the only superhero in the Watchmen universe with metahuman abilities, including almost limitless power. After being caught in a nuclear reaction, Dr. Jon Osterman became a walking reactor, completely untethered from human perceptions of time and space. As such, he is able to replicate himself, teleport, destroy objects and manipulate energy without so much as a passing thought.

The rest of the vigilantes in the Watchmen universe rely on their technology (principally Nite Owl II), fighting skills (Silk Spectre II), cunning (Rorschach), weapons training (the Comedian), or wealth (Ozymandias) to assist them in their respective missions. 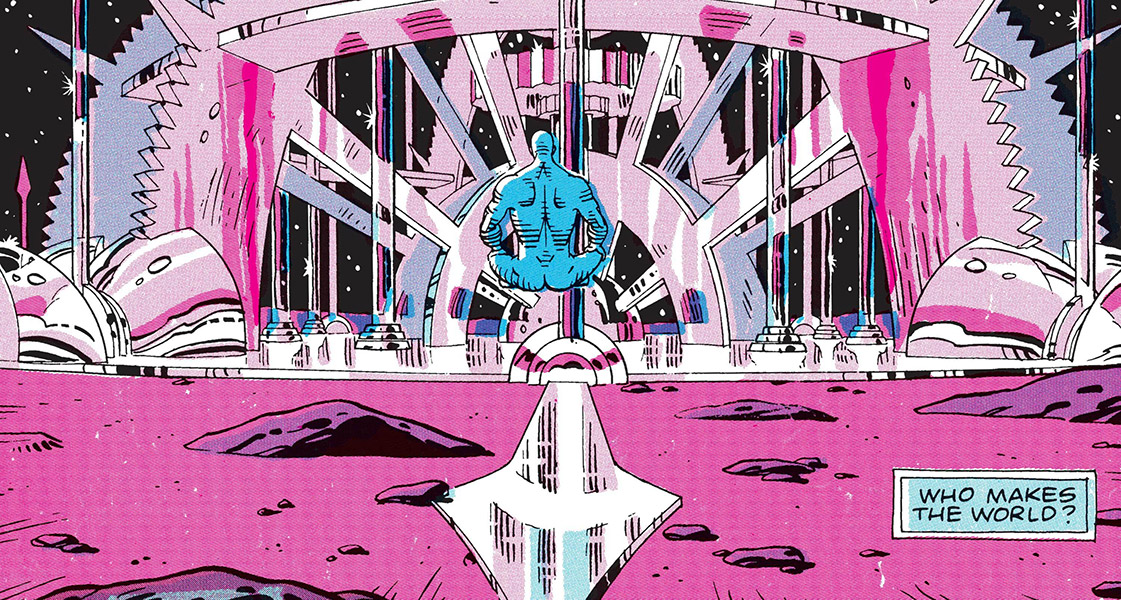 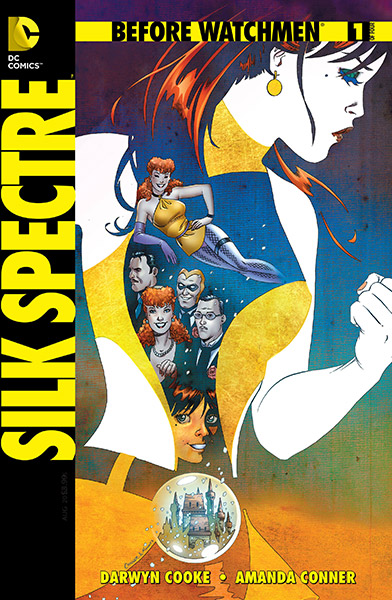 A prequel to 1986’s WATCHMEN, BEFORE WATCHMEN consisted of eight different limited series. Each limited series, set in various decades of the 20th century, focused on the early careers or lives of characters from the prior series.

The twelve-issue WATCHMEN limited series is sparked by the mysterious murder of an original Minutemen member, the Comedian. Paranoid conspiracy theorist Walter Kovacs, also known as Rorschach, took up the case, believing it to be a plot on behalf of some external agency designed to take out costumed avengers.

Rorschach’s conspiracy theory proved to be not entirely groundless. The murder of the Comedian prompted a more critical look at costumed superheroes from the public, and the scrutiny began to expose cracks in their close-knit community. Debates about whether there’s a place in society for masked vigilantes, and the responsibilities of actual metahumans like Dr. Manhattan, increased in volume, forcing Manhattan to retreat from the public eye.

As Rorschach proceeded further down the rabbit hole of the mystery, he enlisted the help of the second Nite Owl and the second Silk Spectre, despite both of them having officially retired from the superhero business. Silk Spectre began the series romantically involved with Dr. Manhattan, but the two became estranged when, no longer able to relate to or identity with humanity, he left Earth for Mars. She then began a new relationship with Nite Owl. 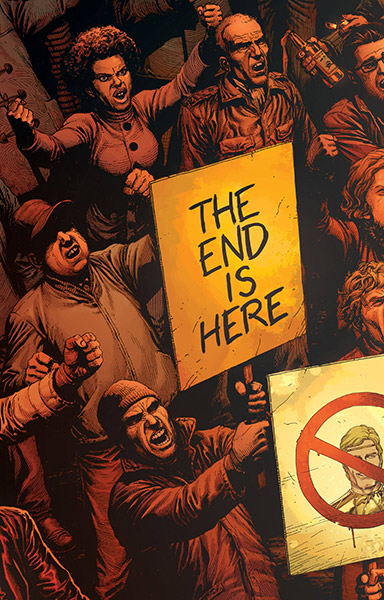 Their quest eventually brought them face to face with Adrian Veidt, a.k.a. Ozymandias, another former superhero who’d since become a business tycoon and futurist. Eventually, Rorschach was able to uncover the truth of Ozymandias' plans, hidden behind his public humanitarian efforts. Believing it the only way to "save" the world, Ozymandias had engineered a fake "alien invasion" to hit downtown New York, creating mass chaos and costing millions of lives. Ozymandias assumed that, in the fallout, humanity's sense of purpose and belief in the place of heroes within society would be reinvigorated. Thus, his one crisis would ultimately save millions of lives.

The revelation came too late, however, and Ozymandias was able to carry out his plan, leaving the city in ruins and the remaining heroes in disarray.

Following the events of 2016’s DC UNIVERSE: REBIRTH #1, it was revealed that Dr. Manhattan had actually managed to escape the Watchmen universe and arrive within the main DC Universe. His presence greatly disrupted the timeline and inspired the remaining heroes in the Watchmen universe—Ozymandias, a new Rorschach, and two new masked vigilantes, Mime and Marionette—to attempt the same cross-dimensional move.

The twelve-issue limited series DOOMSDAY CLOCK takes place after the events of WATCHMEN, in a world ravaged by Ozymandias's plan, more destabilized than ever.