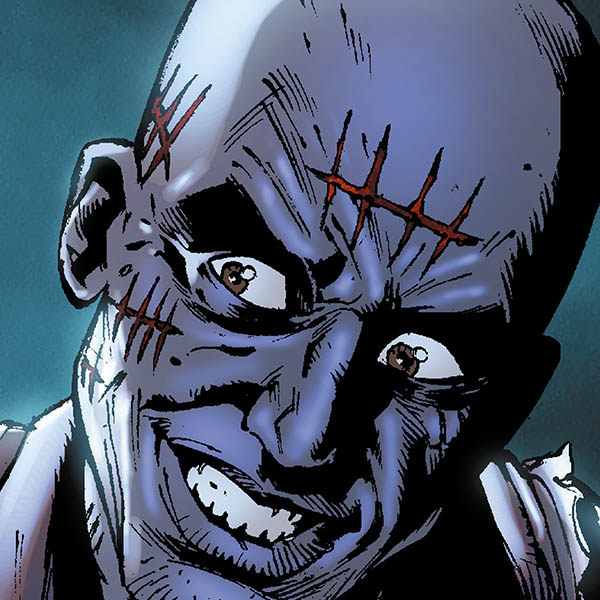 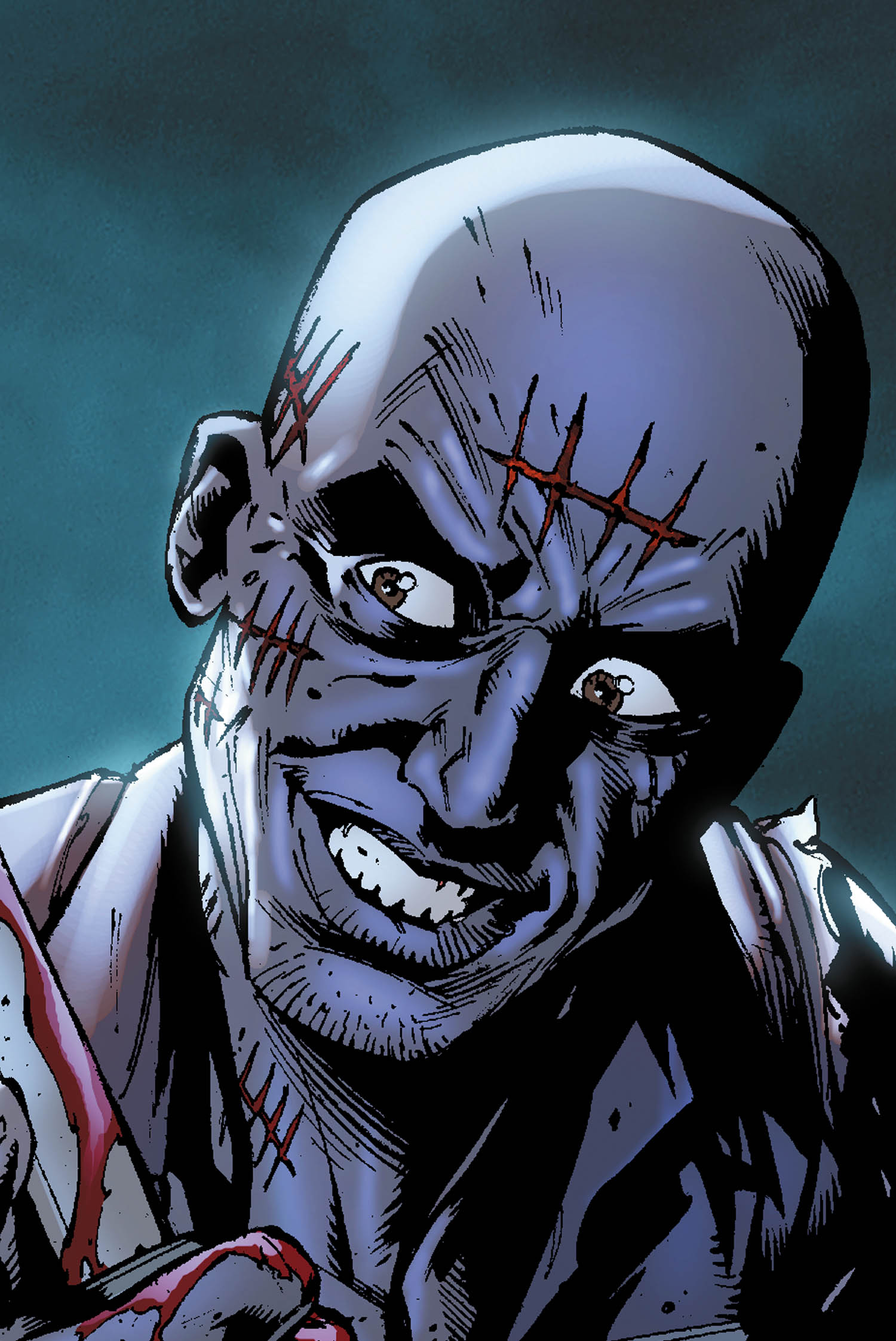 There’s nothing charming or eccentric about this wanton, knife-wielding serial killer who stalks Gotham City. His only affectation: a fresh tally mark carved into his own skin for each new life he claims.

There’s nothing charming or eccentric about this wanton, knife-wielding serial killer who stalks Gotham City. His only affectation: a fresh tally mark carved into his own skin for each new life he claims.

Victor Zsasz is not a super-villain. He doesn’t wear a costume, he doesn’t have themed henchmen, he doesn’t leave clever clues for Batman to find. He needs no money, and no fame. His only desire is to kill and kill and kill and kill and kill and kill. Zsasz knows that he only has so much time on this meaningless world. And the more people he can take with him before he goes, the better. As with all of the most notorious killers, his grim game comes with a set of rules: first, each murder is personal, and committed with the cuts of a knife. And second, for every “zombie” he ushers towards oblivion, a new accounting is made by the edge of that knife upon his own skin. Often depicted as completely hairless, the only way to tell who Zsasz is at a glance is by the dizzying number of tally marks on every inch of his skin. Each one, the death of a person whose only crime was breathing the same air as Victor Zsasz. 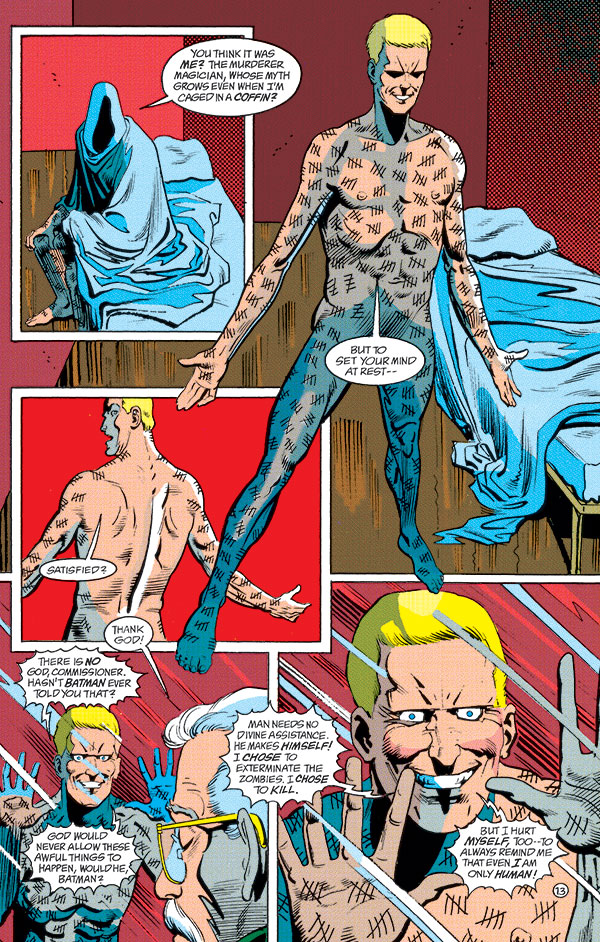 Victor Zsasz was an exceptionally bright child born into exceptional wealth, which he compounded at a young age as the head of his own international company. But when his parents died in a boating accident during his mid-twenties, Zsasz succumbed to a gambling addiction, losing everything up to the shirt on his back to The Penguin. With everything he loved and everything he owned gone, Zsasz was about to take his own life when he was assaulted by a homeless person - who Zsasz killed in retaliation with the man’s own knife. Sinking into his own tragedy, Zsasz reasoned that because all life was pain, the only true act of charity is to liberate others from it. To keep track of his “good deeds,” Zsasz carved a tally mark into his skin for every life he “liberated” from the mortal world. And thus, one of the most notorious serial killers in Gotham City’s history was born. 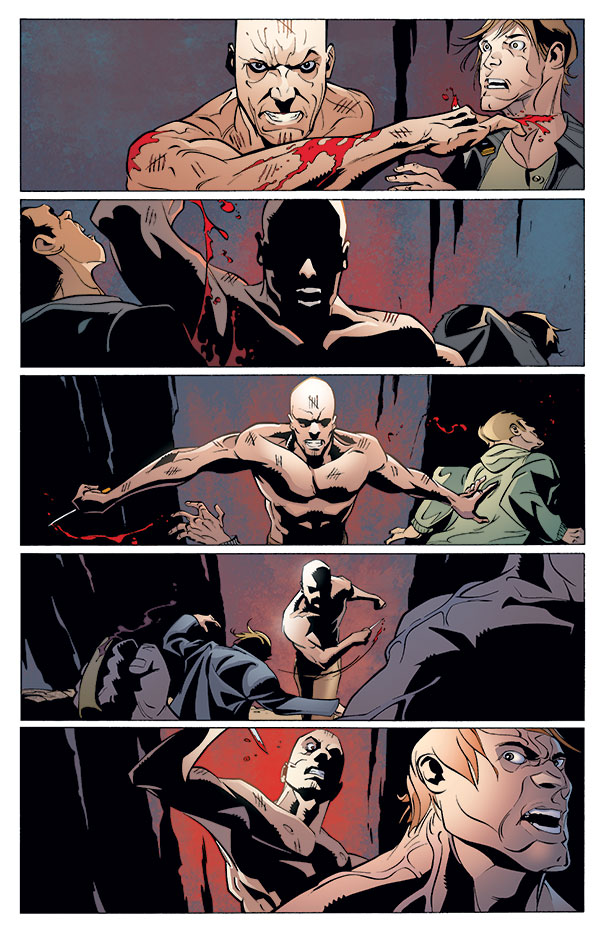 Victor Zsasz has no special powers, and no superhuman abilities. All he has is a finely tuned mind and physique dedicated to one sole purpose: to personally kill as many people as humanly possible.

As his weapon of choice, Zsasz is quick and proficient with knives, wielding them with agility and efficacy even against the likes of Batman and his allies.

Batman’s first documented encounter with Zsasz occurred after he was already incarcerated at Arkham Asylum, in connection with a series of four murders which fit his modus operandi during his incarceration. Examining his body for new tally marks yielded no results — although they failed to check the bottom of his foot for four new cuts. It was eventually discovered that Zsasz had used the remains of his fortune to bribe a contractor into including secret passageways out of Arkham during the facility’s last remodeling, allowing him to come and go as he pleased to claim new victims. When Batman discovered this by going undercover as an Arkham inmate himself, Zsasz hastily killed the contractor in order to cover his tracks, but was outed nonetheless thanks to the assistance of Nightwing. 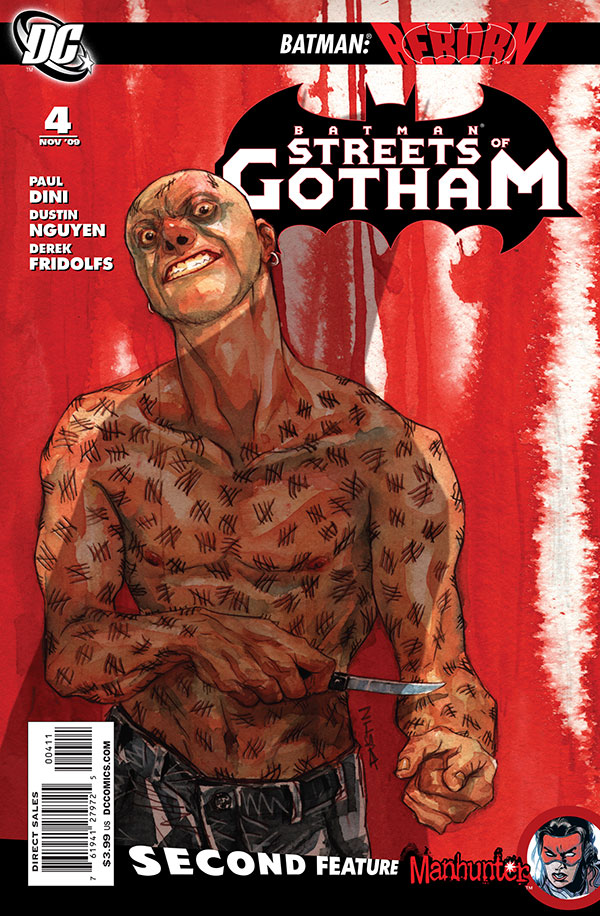 Despite blocking off Zsasz’s secret passageway out of Arkham, the killer managed to escape the facility several more times over his career. When Bane freed all the Arkham inmates during “Knightfall,” Zsasz took an entire girls’ boarding school hostage before a beleaguered Batman arrived to stop him (BATMAN #493, 1993). When the city was plunged into the chaos of “No Man’s Land,” Batman’s frequent ally, critic, and confidante Dr. Leslie Thompkins took him under her care, refusing to shirk responsibility to help any Gothamite in need, no matter how depraved (BATMAN CHRONICLES #18, 1999). But perhaps Zsasz’s most notorious attack came after he escaped during a psychiatric evaluation to attack a charity event hosted by Bruce Wayne, where he managed to stab Bruce’s stalwart butler Alfred Pennyworth — and hastily marked himself for the kill’s credit. Fortunately, Bruce was able to get Alfred medical attention in time to save his life. But that unearned tally mark would crawl forever on Zsasz’s skin, not letting him rest until Alfred was dead, and the count made right (DETECTIVE COMICS #815-816, 2006). 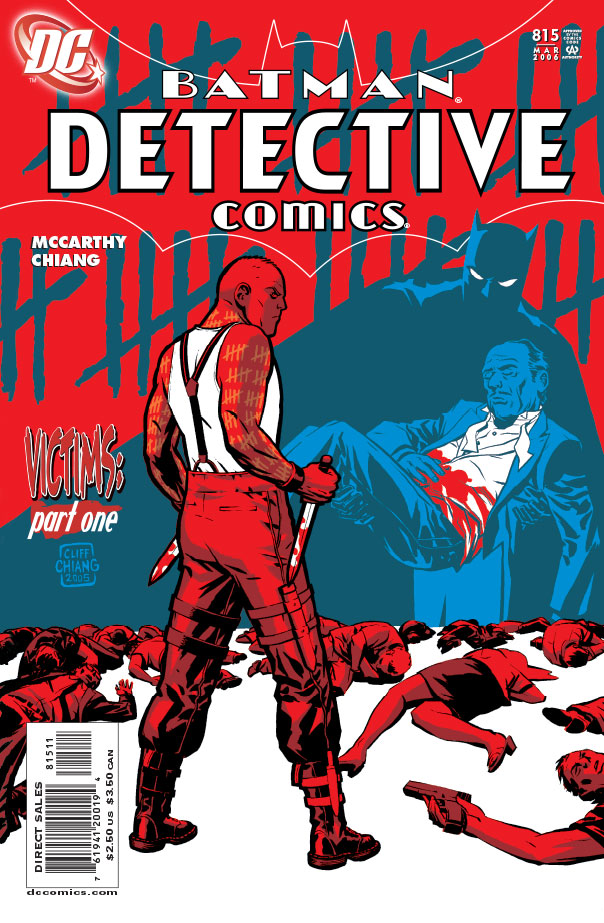 After the disappearance of Batman in FINAL CRISIS, a new Black Mask arose to take control of Gotham City (BATMAN: BATTLE FOR THE COWL, 2009). As part of this bid, the new Black Mask- later revealed to be Arkham Asylum director Jeremiah Arkham- employed Zsasz to oversee a child trafficking operation where abducted minors would be forced to fight each other to the death. In return, Black Mask provided the means for Zsasz to continue his mission to bring death to the citizens of Gotham by the edge of his blade. This child death pageant was eventually infiltrated and broken by the newly minted Robin, Damian Wayne — who, in a new level of personal restraint contrary to his upbringing with the League of Assassins, defeated Zsasz while allowing him to live (BATMAN: STREETS OF GOTHAM #2-11, 2009-2010).

Even after the universe altering events of FLASHPOINT, Zsasz’s nature as a self-marking serial killer remained virtually unchanged. When The Penguin’s majordomo Ignatius Ogilvy executed his play for the big bird’s nest egg as Emperor Penguin, Ogilvy hired Zsasz to keep the Bat-Family busy with a specially treated knife which would transform his victims into Man-Bats (DETECTIVE COMICS #18, 2013). Later, Zsasz redeveloped his methods to kill his victims in extreme ways which brought them to new levels of pain (ALL-STAR BATMAN #1-5, 2016-2017). As such, Zsasz found himself the subject of one of the very first cases undertaken by Batman and his newest crime fighting partner, Duke Thomas — later known as The Signal.