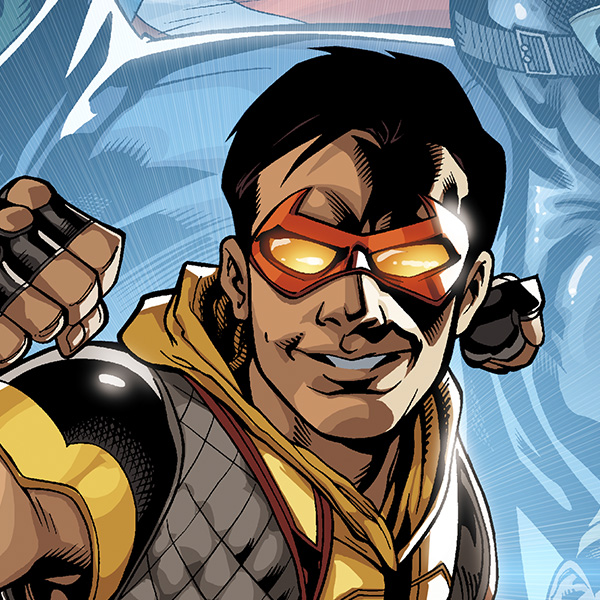 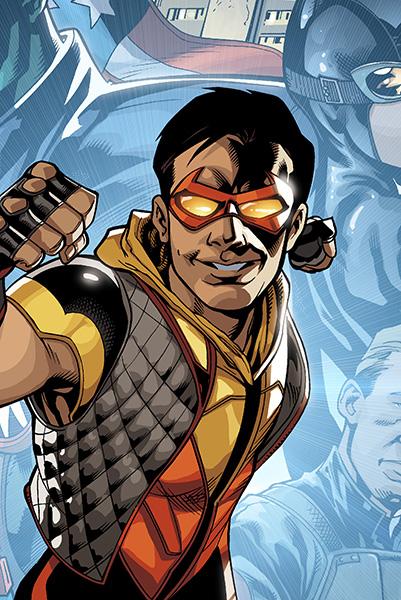 Possessing vibratory powers as well as the ability to open interdimensional portals, Vibe was the first Latin America hero to join the Justice League,

Possessing vibratory powers as well as the ability to open interdimensional portals, Vibe was the first Latin America hero to join the Justice League,

Despite his humble origins, Francisco Ramon (alternately nicknamed Cisco or Paco) has left behind quite a legacy. He was the first Latin-American DC Super Hero to become a member of the Justice League of America, when he and several other young heroes joined what has been referred to as “Justice League Detroit.”

Growing up in Detroit, Michigan, Ramon was a metahuman with the ability to emit intense vibratory shockwaves. At first, he ignored the calling of a hero, and resigned himself to be the leader of a local street gang called Los Lobos. But when the original JLA disbanded, and was later reformed and set up shop out of his hometown, Ramon took on the codename Vibe and joined the team, where he quickly earned the respect of veteran Leaguers like Aquaman and the Martian Manhunter.

Although his time with the League was brief, he proved himself a true hero, and was fondly remembered by his teammates after he was killed in action. When the history of the DC Universe was reimagined after the events of 2011's FLASHPOINT, Ramon lived again. In this new history, Vibe's powers came from being caught in the event horizon of a Boom Tube during an invasion from Apokolips, during which interdimensional forces rewrote his DNA. Not only did the new Vibe have vibratory powers, but also the ability to create interdimensional portals! 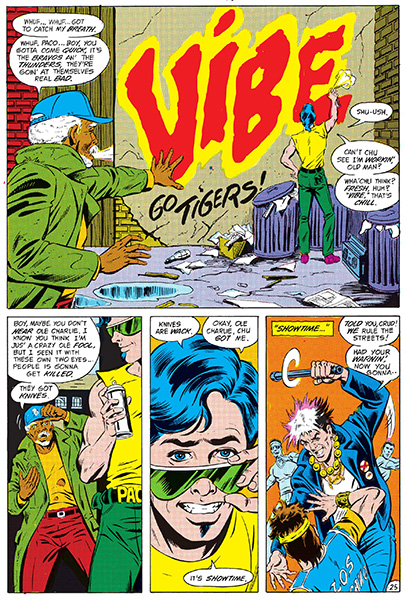 Growing up in the streets of Detroit alongside his brothers Armando and Dante, Cisco Ramon, or Paco as he was most commonly referred to, fell in with a bad crowd at an early age. He joined a street gang called Los Lobos, and eventually became the gang’s leader. Although he had super powers – the ability to create seismic waves – for as long as he could remember, he only used these powers for selfish reasons. And despite his natural talent as a dancer, Ramon never saw a life for himself outside of the streets of Detroit.

That all changed when the fabled Justice League of America broke up. Following an attack that left their satellite headquarters in tatters, their most prominent members quit the team. Founding member Aquaman disbanded this iteration of the League, but soon after reformed the JLA as a more grounded operation, operating out of Detroit. When Ramon learned of this, he saw an opportunity. Along with several other young heroes, he volunteered to join this new iteration of the Justice League as Vibe.

Although the young break dancer was looked at skeptically by the veteran Leaguers, he proved himself in battle against the likes of the Cadre, Anton Allegro, and Amazo. But he really showed his mettle when he helped defeat the alien conqueror Despero, one of the first villains the League ever faced. Vibe also served the League with distinction during one of the DC Universe’s darkest hours, the CRISIS ON INFINITE EARTHS…

In the wake of 2011's FLASHPOINT event, the history of the DC Universe was reimagined, giving Ramon a second chance at life. This iteration of Ramon gained powers much later in life. He was caught up in the event horizon of a Boom Tube during Darkseid's first invasion of Earth, the event that led to the formation of the Justice League in the post-Flashpoint reality. Ramon’s exposure to interdimensional forces rewrote his DNA, giving him vibrational powers as well as the power to open portals to other dimensions and realities. Taking the name Vibe, Ramon helped the government agency A.R.G.U.S. find and detain dangerous fugitives from other realities. When A.R.G.U.S. formed their own branch of the Justice League, Vibe became the second-youngest member of the League ever.

Vibe’s super powers are based around an innate, metahuman control of vibration and resonance. Cisco Ramon can create massive shock waves, enough to destroy concrete and steel. Somewhat similar to the former Teen Titan named Terra, Vibe’s powers could also affect the seismic vibration of the Earth. In his post-Flashpoint incarnation, Vibe’s powers were greatly amplified, and included the ability to resonate his frequency to open portals to other dimensions. 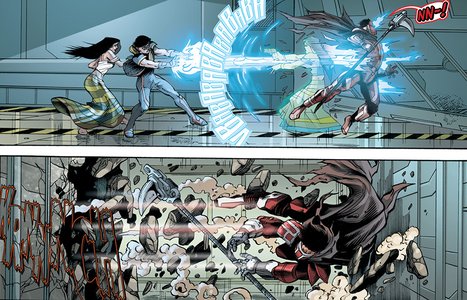 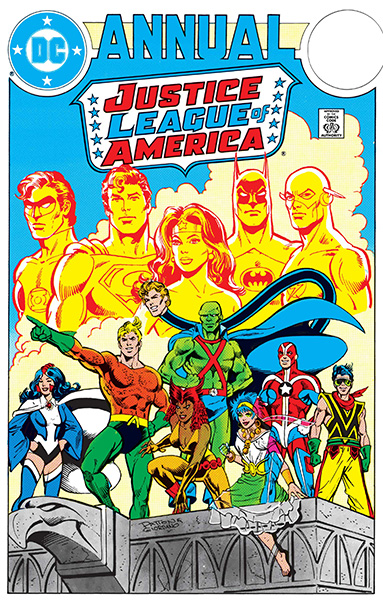 In Vibe’s first appearance, he was a street tough and a break dancer, who saw an opportunity when the Justice League of America moved its base of operations to his hometown of Detroit. Although the elder members of the team scoffed at the idea of a young punk from the streets joining the team, Vibe proved himself in battle. So the JLA welcomed him into the group, along with new members Steel, Gypsy, and Vixen. 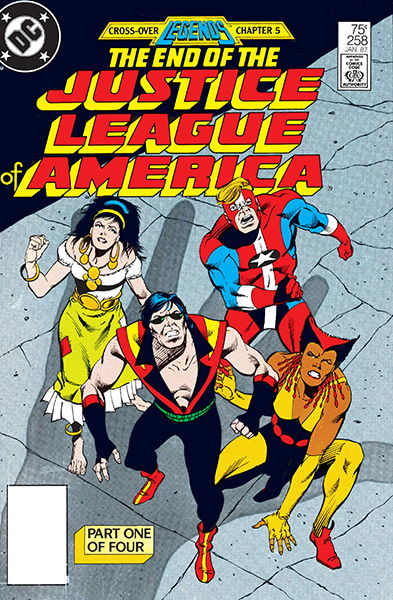 Two years later, Darkseid orchestrated a crisis, turning public sentiment against Super Heroes and forcing the Martian Manhunter to disband the League. Vibe went to New York, to a crime-ridden area of the South Bronx. There, he met a young Latino child drawing pictures of Superman. When Vibe told him he should look up to Hispanic heroes and not just white men, the child pointed out he’d never even heard of Vibe, which both angered and saddened the hero. At the same time, the League’s old enemy Professor Ivo attacked Vibe with his androids. As the child cheered Vibe on, telling him he was his new favorite Super Hero, an android killed Vibe in battle, making Francisco Ramon the first member of the team to die in the line of duty.

During the event known as the Blackest Night, the evil entity Nekron raised the corpses of the dead all over the galaxy and gave them Black Lantern rings. These undead beings held the memories of their former bodies, but did not have their souls. They then attacked the hero community. Vibe was among the fallen heroes risen by Nekron, and together with the body of his JLA teammate Steel (who’d died soon after Vibe), attacked his old friends Vixen and Gypsy in the Hall of Justice. Eventually, his body was destroyed by Doctor Light. 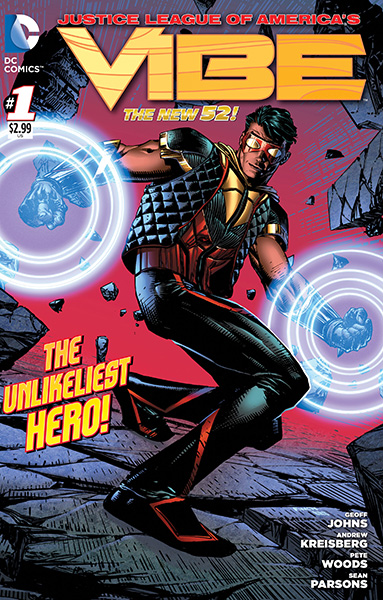 In the reimagined timeline of the DC Universe post-FLASHPOINT (popularly known as the New 52), Francisco Ramon was alive again, never having joined the JLA. In the altered timeline, Cisco Ramon found himself in the vicinity of an Apokoliptian Boom Tube during Darkseid's first invasion of Earth. This prolonged exposure gave him his super powers, including the power to create transdimensional portals, an ability he’d never had in the previous timeline.

This Vibe was later invited to join a version of the Justice League of America backed by the government agency A.R.G.U.S. This JLA was intended as a countermeasure should the original League ever go rogue. Vibe was picked because his powers interfered with the Flash’s use of the Speed Force. He wound up fighting a version of his brother Armando from another dimension. This Vibe left Earth with the metahuman Gypsy, his teammate in the pre-Flashpoint reality.