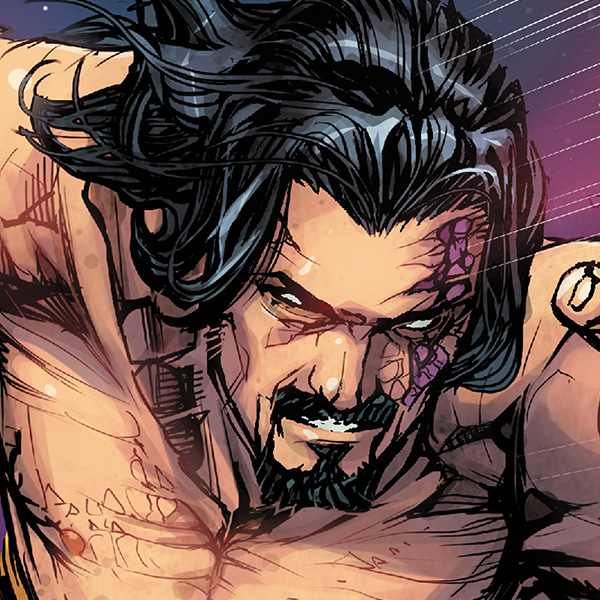 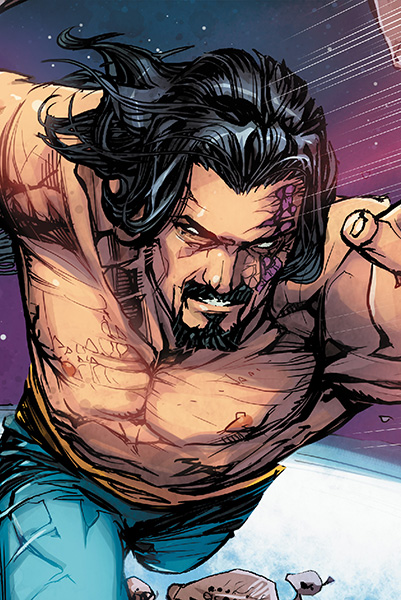 A Cro-Magnon caveman turned conquerer, the near immortal Vandal Savage has brought incalculable suffering throughout the millennia in his quest for world domination.

A Cro-Magnon caveman turned conquerer, the near immortal Vandal Savage has brought incalculable suffering throughout the millennia in his quest for world domination.

Immortality can be a blessing or a curse but to Vandal Savage, it’s a never-ending opportunity to reach his ultimate goal of global domination. A resilient villain and threat, he has plagued virtually every single hero in the DC Universe from the Golden Ages to the Modern Ages and beyond. With several lifetimes under his belt, Savage has trained in combat and all things war including military tactics, weaponry and various fighting styles. Brute as he is, it’s his brains that pose the greatest danger. Enhanced with genius-level intellect from the meteor and as life long student of history, Savage has been around to see great leaders rise while others fall to their demise and knows what should and shouldn’t be repeated.

Over time, Savage has been a part of some of the most powerful and deadly groups to ever exist. He was the driving force behind the Illuminati, a secret society that dates back to several hundreds of years. In the Dark Ages, Savage came together with the likes of other sorcerers, demons and warriors to form the Demon Knights and fight the mighty sorcerer, Mordu. More recently, Savage has headed the Secret Society of Super-Villains and even had a short stint on the good side, reluctantly joining forces with Justice League United.

While heroes and villains come and go, one thing is certain, Savage, not just his evil legacy, will live on forever. 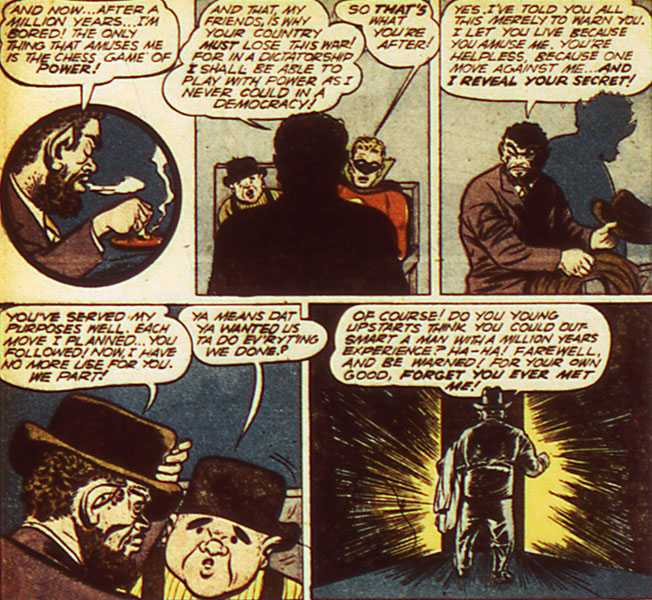 More than 40,000 years ago when a meteor hit earth, a Neanderthal caveman named Vandar Adg (who would become Vandal Savage) was exposed to its radiation and absorbed incredible power and immortality. The radiation not only enhanced his physical abilities, it also afforded him superior intellect that far surpassed the intelligence of his Cro-Magnon tribe. Stemming from that singular event, Savage has claimed to be the backbone of several empires and civilizations under the names of now famous historical figures such as Alexander the Great, Julius Caesar and Genghis Khan. He also said he has been a close confidant and advisor to people like Erik the Red, William the Conqueror and Napoleon Bonaparte.

Vandal Savage has left his mark on the timelines of nearly every super hero on Earth beginning with Alan Scott, the first Green Lantern. He would join the Injustice Society of the World to become a recurring foe to Justice League of America and was a prime adversary of the Flash. But Savage’s eternal nemesis was and always will be Immortal Man whose ancient heritage was much like his own. When the meteor hit, Savage was directly affected but Immortal Man had fashioned an amulet out of a piece of the comet from whence his powers derived. The two clashed for years after and only grew to cement their status as sworn and ancient enemies. 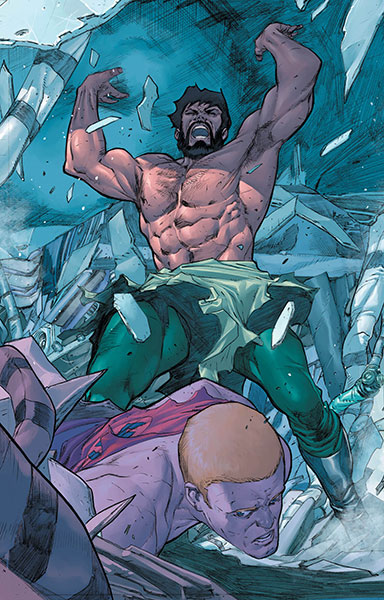 Thanks to the radiation exposure of a meteor that crashed on Earth, Vandal Savage has been gifted with some of the most extraordinary and dangerous abilities the world has ever seen—immortality possibly the crux of his entire being. He has remained un-aged for over thousands of years. He cannot die through traditional means and even when wounded, Savage has the ability of advanced healing regardless of severity. Since becoming immortal, he has developed a high threshold for pain. In ways, he most definitely is “savage” as he must partake in ancient blood rituals and drink the blood of his victims to restore his powers.

The radiation has also enhanced his intellect, strength and stamina. Savage’s ancient connections, especially with villainous groups across the globe put him at an advantage to exercise influence and control over mankind as he wishes. Having lived so long, Savage is well versed in a number of fighting styles but still prefers to wield bladed weapons when he can get his hands on one. 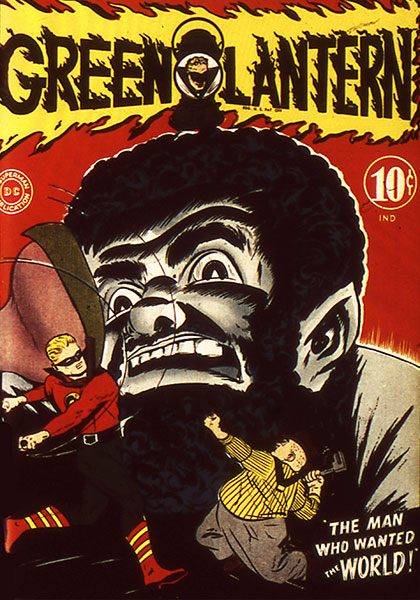 While Vandal Savage had tangled with Barry Allen’s Flash, this is the first storyline that introduced him to Wally West, who assumed the mantle after Barry. While trekking across the north pacific with a mission to deliver a donor heart, Flash encountered Vandal Savage. He had just killed a private investigator that was close to discovering who Savage really was. He disappeared before Flash could apprehend him. Arriving at Seattle Hospital, Flash delivered the heart and the transplant with the patient was a success.

When he got home to New York, Savage was waiting in his apartment. He had used the computer to gather information about Flash saying he wore the same costume as his greatest enemy and was compelled to know who he was. Savage told Flash he killed to protect his anonymity and to take his force by drinking his blood so that he may live. They began to brawl and as Flash kicked him through the bedroom door, there was a loud blast.

Later, Wally hopped on the computer to do a little investigation of his own. He found that Vandal had an antique salon called Villers Gallery. While out on the town with his gal, Francine, a waiter handed him a business card bearing the name Villers Gallery. Savage was there on the Mezzanine. Taking a chair, he broke the window and proceeded to toss a patron out of it. Wally dashed off as the Flash, able to save her before she hit the ground. Savage now had Francine cornered but Flash kicked him from behind. Francine rolled the dessert cart his way and Flash slammed Savage down onto it and pushed it out the window. While the cart was found, Savage never landed. 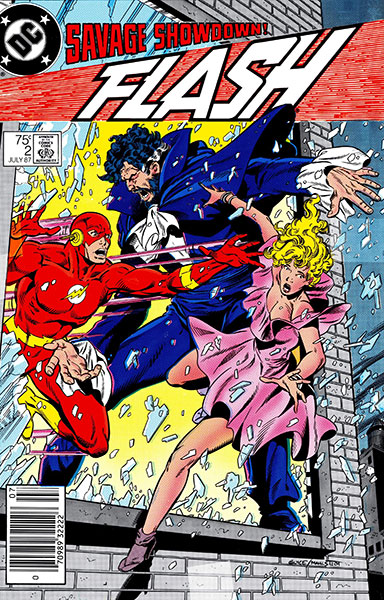 Scheming in a dark castle in Scotland, Vandal Savage was trying to pry information from his prisoner whom he called “sources”, a cloaked figure with the powers of telepathy. The first name it fed him was Siren, a voodoo spirit who could take the shape of a mermaid and who had previously fought the Titan, Tempest. Savage continued to brainstorm with his prisoner, needing a person who could rival Roy Harper as Arsenal. The prisoner answered with Gorilla Grodd and Savage sought him out in the depths of a city sewer. Promising immortality, world domination and the defeat of the Titans, Grodd was more than interested to comply. As Savage, Siren and Grodd were chatting about their budding team of villains, Savage mentioned Red Panzer and his powerful armor. He took the two to meet their latest member wearing the costume and the one who could be potentially beat Donna Troy.

Later, in search of a matching adversary for nightwing, Savage recruited Lady Vic. To round out his team called Tartarus, after the ancient underworld prison that housed the Titans of myth, a dangerous assassin named Cheshire entered the chambers requested to join, as she was ready to battle the Titans. With his team formed, Savage brought out the prisoner, the one person who helped make Tartarus possible. Her name was Omen and she was a former Titan. 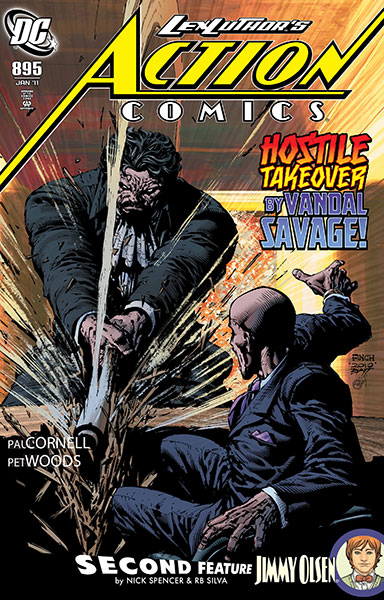 On a quest to find the Black Lantern energy, having had a taste of true power as an Orange Lantern, Lex Luthor found himself in the company of the immortal crime lord Vandal Savage. He had in his possession, two of the black spheres Luthor was desperately searching for. Believing that Luthor and the spheres were the key that would lead him to eternal happiness, he would stop at nothing to keep them under control.

But Luthor had a plan B that included putting The Secret Six into play, a mercenary team consisting of super-villains, who counted Scandal, Savage’s own estranged daughter as one of their members. During their rescue mission of Lex, he knew that by leveraging Savage’s daughter and threatening her life, he would have the upper hand. During Luthor and Savage’s back and forth, Savage was about to throw Luthor off the ledge of a building but Scandal stopped him. Then she punched Luthor for trying to kill her. 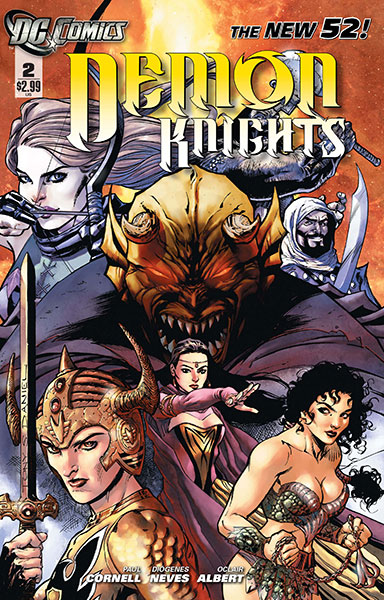 Following the fall of Camelot, a mass of barbarians known as the Horde of the Questing Queen were pillaging the land and had its sight set on the small village of Little Spring. Brought together by fate, Vandal Savage along with Jason Blood, bonded to Demon Etrigan, Madame Xanadu, Al Jabr, Exoristos and Sir Ystin were the only hope to stop the horde from descending upon the village. Vandal Savage, a burly, dragon-devouring warrior became the medieval group’s captain. As the horde neared, Savage escaped through a door that led to the privy tunnel to confront the queen herself. Little did the other Demon Knights know; he once served in the Queen’s ranks. She received him with open arms and appointed him General of her barbarian army. But soon Savage revealed his true intentions as they unfolded on sorcerer Mordu’s crystal ball. Savage attacked the Horde’s baggage train containing their food and wages. Tricked by her own General, the Queen attacked her very forces resulting in chaos and destruction. With Alba Sarum’s riders on her tail, her only course of action was to retreat.