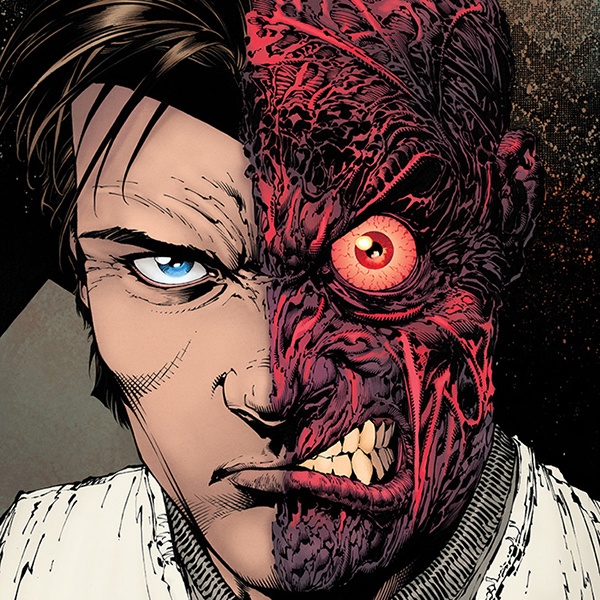 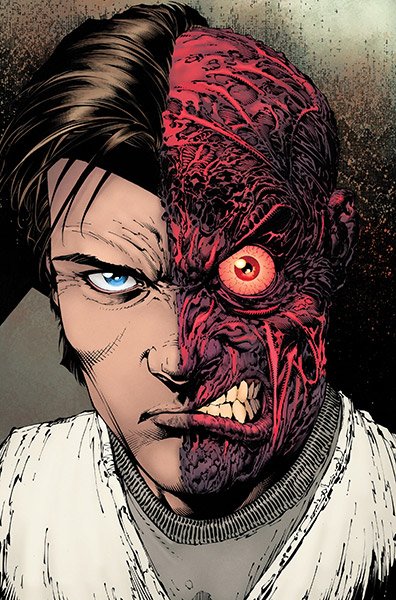 The literal personification of humanity's dual nature -- its capacity for good and evil -- former Gotham City district attorney Harvey Dent challenges the cruel randomness of fate with the toss of a coin. 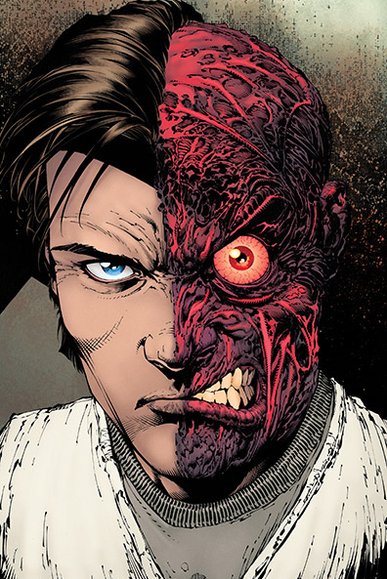 The literal personification of humanity's dual nature -- its capacity for good and evil -- former Gotham City district attorney Harvey Dent challenges the cruel randomness of fate with the toss of a coin.

Harvey Dent was the son of an abusive alcoholic. At times, Harvey’s father would flip a coin in front of the boy to determine if he would beat Harvey that night or not. As he grew older, Harvey repressed his memories of these beatings, and this led to a second personality growing within him…and a second mind that didn’t believe in following rules and refused to trust people.

Harvey became a daring district attorney, unafraid of Gotham’s corrupt politicians and mobsters. He worked alongside Batman and Commissioner James Gordon, as well as businessman Bruce Wayne, to improve Gotham City. But when vengeful criminals threw acid in his face, it scarred him horribly. The incident bought back memories of his childhood trauma. Soon, his second, darker persona emerged as the cunning criminal Two-Face, who makes all important decisions and determines which of his personalities will dominate those actions with the flip of a coin, scarred on one side. Whatever his coin decides, Gotham City will have to deal with the consequences.

There have been a few reinterpretations of Two-Face over the years, with various takes on his past. In his very first story in 1942’s DETECTIVE COMICS vol. 1 #66, he was an attorney who was scarred during a courtroom trial by the criminal Boss Maroni. The trauma mentally and physically scarred him for life, leading him to embark on a life of violence and crime.

Harvey Dent’s origin was retold in BATMAN ANNUAL #14 (1990) and BATMAN: THE LONG HALLOWEEN (1996-1997), both of which included his childhood abuse inflicted by his alcoholic father, a cruel man who flipped a coin to tease the boy’s fate. The boy would eventually discover that the coin had been double-headed. BATMAN ANNUAL #14 explained that even before the acid attack by Maroni, Dent’s second, more violent persona would sometimes take over, prompting him to attack criminals. The acid attack didn’t give birth to this other personality, it merely served as a catalyst for Harvey to regress.

DC rebooted much of its history in 2011 with the New 52 and again in 2016 with Rebirth. As a result, Harvey’s early history has been altered, and his scars have resulted from different circumstances. 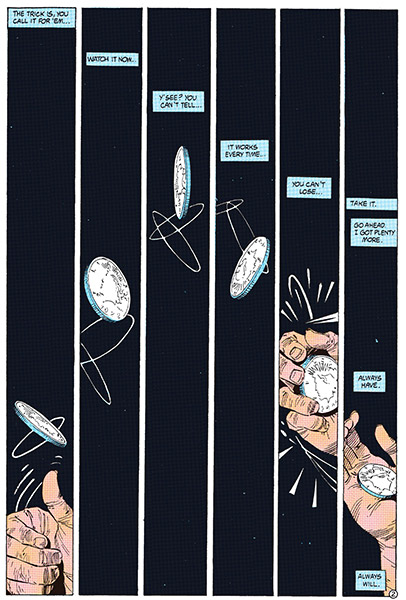 Though Harvey Dent has no superpowers, he possesses a genius-level intellect and is an expert in criminology and police procedures, helping him predict how the Gotham City Police Department will try to stop his crimes. His split personality, genius intellect and reliance on flipping a coin to make decisions make him an extremely unpredictable opponent.

Though no longer considered official canon in the DC universe, BATMAN: THE LONG HALLOWEEN and its sequel, BATMAN: DARK VICTORY (1999-2000), trace Harvey’s slow decline into his criminal persona, as well as his crumbling friendship with Batman and Commissioner Gordon, and his first experiences as one of Gotham’s Super-Villains.

War with the Robins 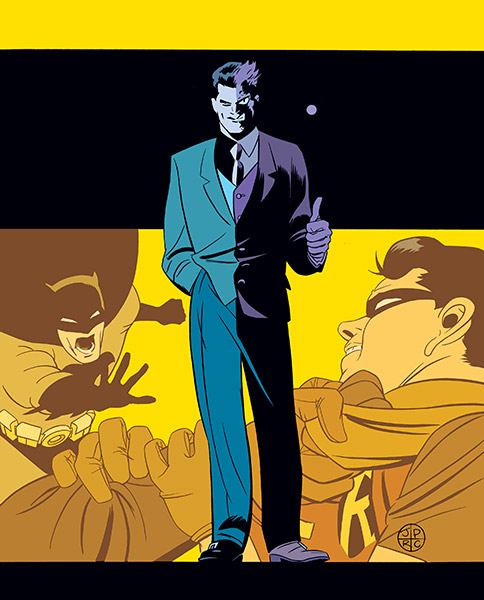 In 2001’s ROBIN: YEAR ONE, Two-Face nearly kills the first Robin, Dick Grayson, during the early days of his career as Batman’s apprentice. This leads to Batman initially firing the boy from crime-fighting in order to protect him, establishing a strong animosity between Two-Face and Grayson.

The second Robin, Jason Todd, also had a personal vendetta against Two-Face. Jason’s father, Willis, vanished before Jason became Robin, but the young crime-fighter discovered in BATMAN vol. 1 #411 (1987) that the man had taken a job as one of Two-Face’s henchmen. He paid for this alliance when he was eventually shot dead by the villain.

In the 1989 storyline “A Lonely Place of Dying,” Two-Face was manipulated by The Joker into a new crime spree soon after the death of the second Robin, Jason Todd. This resulted in Tim Drake beginning his career as Batman’s newest apprentice, the third Robin.

In 1999’s “No Man’s Land” storyline, in which Gotham was leveled by an earthquake, Two-Face took over a portion of the city. Later, he put Jim Gordon on trial for what he believed were crimes against Gotham, and acted as both prosecutor and judge. But Gordon then coaxed the true Harvey Dent personality into acting as his defense. This locked Two-Face in a mental battle with himself until he acquitted Gordon.

During “No Man’s Land,” the unscarred side of Two-Face’s coin came up several times, resulting in him helping GCPD Detective Renee Montoya with her efforts to protect several people and rebuild a neighborhood. Two-Face developed an affection for Montoya. Later, in GOTHAM CENTRAL #6-10 (2003), he fell in love with Montoya. When she rejected him, he publicly outed her as a lesbian and attempted to frame her for murder.

In the “Hush” storyline (BATMAN vol. 1 # 608-619, 2002-2003), Harvey Dent’s personality re-emerged; his face restored by the brilliant surgeon Thomas Elliot. With his sanity seemingly restored, he attempted to live a better life. But not before shooting the villain Hush. Following the events of 2005’s Infinite Crisis, Harvey aided Batman in defending Gotham City. But in 2006’s “Face the Face” storyline, the Two-Face persona reappeared. Here, Harvey scarred his own face and resumed his criminal life. 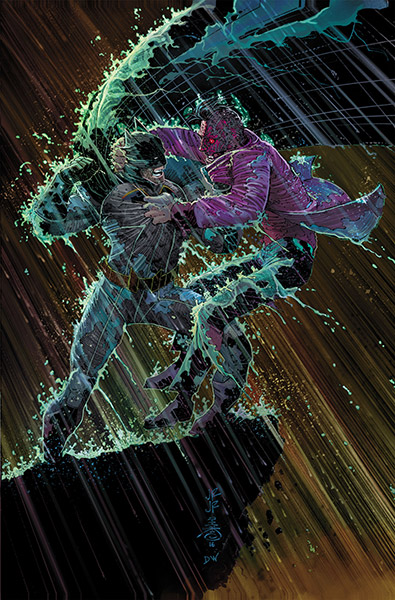 Two-Face tried to kill Erin McKillen in “The Big Burn” (BATMAN AND ROBIN vol. 2 #24-28, 2013-2014). But his attempt failed, and he wound up nearly killed by McKillen’s mob, only to be rescued by Batman, at which point Two-Face revealed he knew the Dark Knight’s true identity. After parting ways with Batman, Two-Face attempted suicide by shooting himself in the head.

In “My Own Worst Enemy” (ALL-STAR BATMAN vol. 2 #1-6, 2016-2017), Two-Face was revealed to have survived his suicide attempt. Though the bullet missed his brain, his mental instability worsened. The Harvey persona reached out to Batman, claiming there was a physical cure for his condition. The two then embarked on a 500-mile journey back to Arkham Asylum.

At the end of this journey, Harvey revealed he’d given up hope and wanted to end his war of personalities. He explained that the cure would actually destroy him and allow Two-Face to dominate. Batman then injected Harvey with a chemical compound that made him immune to the cure, forcing Harvey to deal with his traumas and someday earn victory over his Two-Face persona.

• The Secret Society of Super-Villains