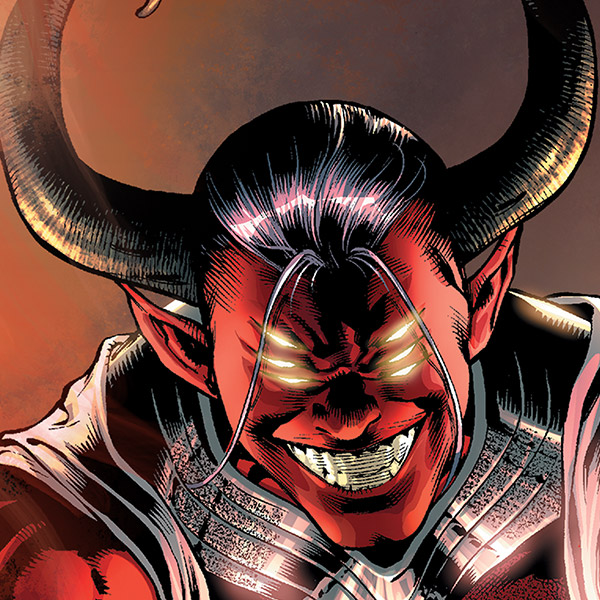 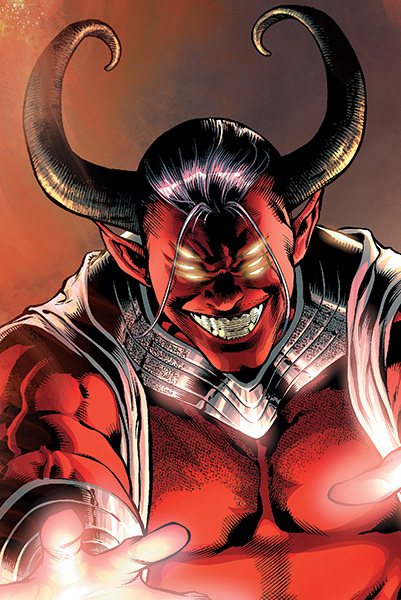 The living embodiment of evil itself, Trigon has tried numerous times to conquer reality, but has been thwarted by his daughter Raven and the Titans.

The living embodiment of evil itself, Trigon has tried numerous times to conquer reality, but has been thwarted by his daughter Raven and the Titans.

Aliases: Trigon the Ravager, The Lord of Madness, Skaath, Ddrez, Trigon the Terrible

Born from the unholy union between evil cast out of human souls and the mystical energy of the realm of Azarath, Trigon is the physical manifestation of the darkness that lurks in the worst parts of humanity. A tyrant and a monster, Trigon rules over hundreds of worlds from his home in Azarath, but is always looking for more to conquer.

Over the years, the demon lord has spawned a number of children to use as weapons in his endless thirst for domination. Fortunately, at least one of those offspring – the DC Super Hero Raven – has other ideas about her destiny. 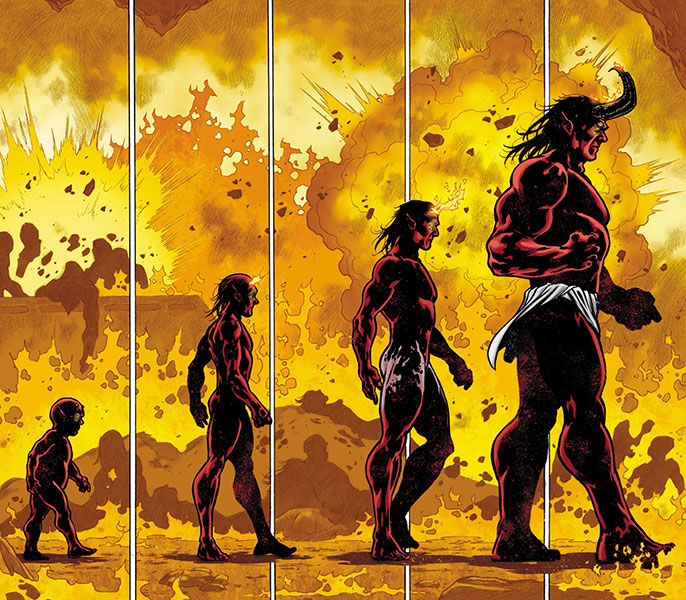 Despite his nearly limitless power, Trigon has not always existed. He was summoned into being when a cult of humans abandoned life on Earth hundreds of years ago to start anew on Azarath.

Seeking peace within themselves, the cult conducted a ceremony to exorcise the darkness in their souls and cast it through the Great Door, an extradimensional portal in Azarath, thinking they would be rid of it forever. Instead, the formless darkness traveled the cosmos until it coalesced into a physical form, an unborn child, who came into the world through a human mother.

The infant Trigon wasted no time in slaughtering the human cult responsible for his creation. As he grew, he conquered any world he set his sights on. 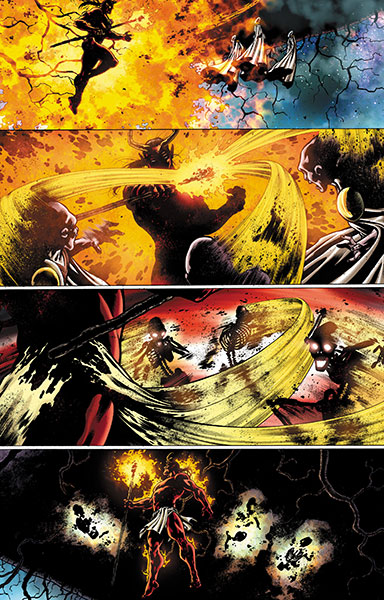 A demon lord and the literal embodiment of evil, Trigon wields nearly limitless power. He is immortal, indestructible and able to telekinetically manipulate energy to create or destroy anything around him. He is capable of interdimensional travel and of teleporting himself and anyone he chooses. 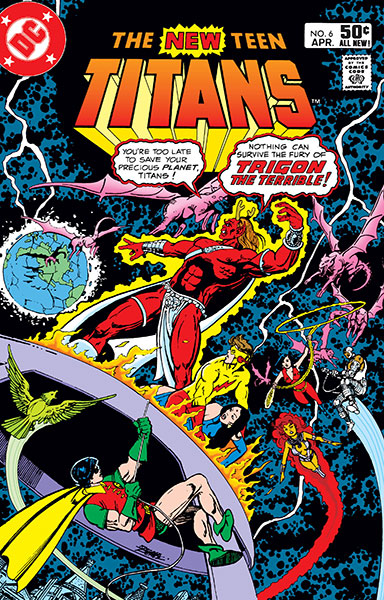 It was Trigon who inspired his daughter, Raven, to first re-form the Teen Titans (in 1981's THE NEW TEEN TITANS #1). Knowing her father was aiming to conquer Earth, Raven did everything in her power to rally Earth's Super Heroes against him. But she found all too few of them believed his threat to be serious. Desperate, Raven relied on her powers – passed on to her from her father's demonic blood – to trick the Teen Titans into believing they knew and trusted her.

Trigon, undeterred by his daughter's efforts, tried to press his invasion. But the combined efforts of both the Justice League and the Teen Titans put a temporary end to his threat against Earth (THE NEW TEEN TITANS #5, 1981). Unfortunately, Trigon's defeat eventually left Raven adrift and lost in the realm outside of Azarath, cut off from her friends and pinned beneath her father's endless power.

Years later, Trigon attempted to invade again. He started by launching an assault on Azarath; and the psychic unrest his attack caused was enough to prompt the Teen Titans to search for Raven's lost soul. They set out on a mission to infiltrate Azarath, only to allow, inadvertently, Raven's soul to be completely corrupted by her father's influence.

Trigon was able, at that point, to manifest on Earth, taking over Titans Tower and remaking whole swaths of the planet in his image. But Lilith, the Teen Titan psychic, took control of a mystical artifact known as the Rings of Azar; through which the team dethroned and defeated Trigon completely (THE NEW TEEN TITANS #1-5, 1985).

Though defeated, Trigon was not destroyed. He returned to his own dimension outside of Azarath and began designing a new plan. He fathered several children known as the Sons of Trigon, each of them empowered with an ability reminiscent of the seven deadly sins, and launched a new attack – with Raven in his crosshairs (TITANS #3, 2008). His children’s goal was to use Raven's power to create a portal so their father could return to Earth at last. Though they succeeded in temporarily turning Raven evil, they were ultimately defeated through the use of the Ramat Stone, an artifact Raven had given the Titans to stop her should she ever be swayed to her father’s side. 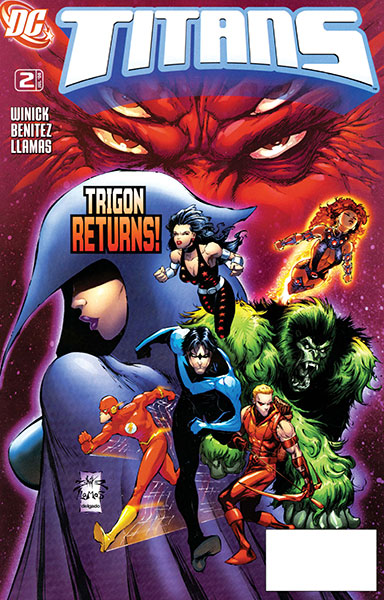 In the continuity of DC's New 52, Trigon (in 2013's TEEN TITANS #23.1: TRIGON) began as a demon who was fed to the Heart of Darkness -- the sum of all evil drawn from nearly one hundred galaxies -- by the three beings who created it, the Divine, in an effort to eradicate the very concept of evil. But Trigon proved stronger than the Heart of Darkness, and instead siphoned all of its power and used it to destroy the Divine. Summoning women from across time and space to serve as his "brides," he was reborn on other worlds. Eventually, his followers brought him Arella, an Earth woman with whom he sired the Titan known as Raven.

Though Trigon's followers eventually captured Raven and used her soul-jewel to bring her father to Earth, the Daughter of Darkness successfully imprisoned  him in his home dimension with the aid of her mother and Trigon's other children, her long lost sisters, with whom she forever stands guard against him.

• The Church of Blood

In the film Justice League vs. Teen Titans, Ra's al Ghul reveals that it was Trigon who originally created the Lazarus Pits. (Submitted by @HubCityQuestion)

Despite his demonic appearance, Trigon has never been portrayed with any connection to Hell as it exists in the DC Universe, and thus may not even be technically considered a demon. However, Trigon is not above using his superficial resemblance to the devil to his advantage. (Submitted by @HubCityQuestion)