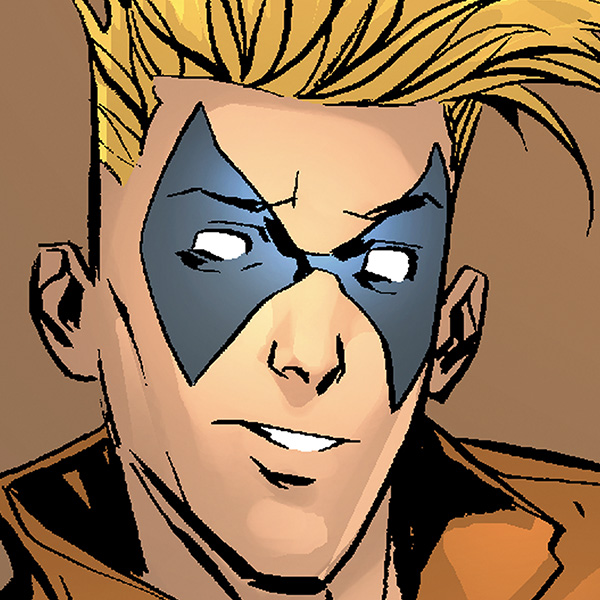 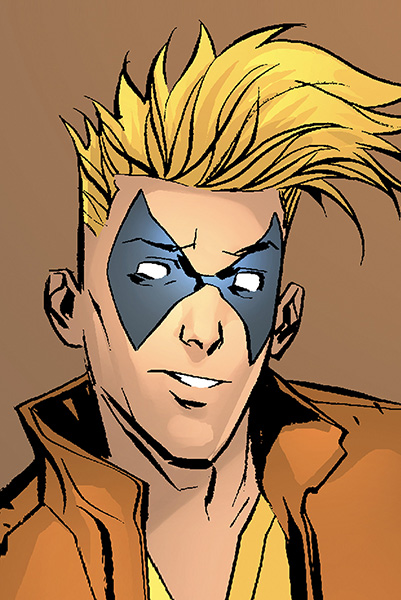 Though not the most infamous member of Central City's Rogues, with his  deep-rooted love of theatrics, the Trickster nevertheless cuts a memorable figure.

Though not the most infamous member of Central City's Rogues, with his  deep-rooted love of theatrics, the Trickster nevertheless cuts a memorable figure.

If there’s one thing DC Super-Villains have in abundance, it’s creativity. That’s certainly the case for the Trickster. A card-carrying member of the Central City Rogues, this foe of the Flash prides himself on a near-limitless repertoire of gizmos and gadgets that allow him to perform his devious “tricks.”

A circus acrobat turned con man, James Jesse was only trying to make an extra couple bucks when he first pursued a life of crime. Using his ingenuity and show-business background, he designed himself an arsenal of devices to help him pull off various heists, most of which brought him into conflict with the Scarlet Speedster.

Jesse, however, was far from all bad. Mostly motivated by a yearning for thrills, he was able to turn a corner and become a force for good more than once. But the temptation of another big score always drew him back to crime. 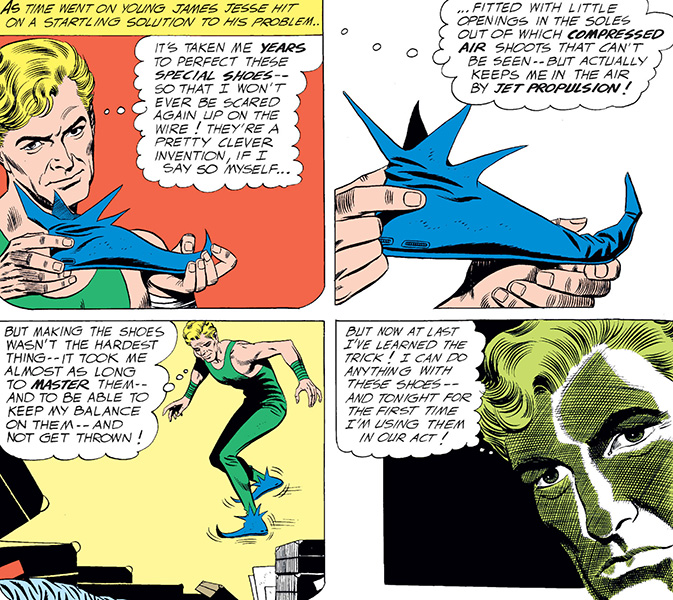 The original Trickster went by the stage name James Jesse and worked as a circus acrobat. His family’s act centered on the trapeze, so to enhance his performances, Jesse invented a pair of gag shoes to make it look as though he was walking on air. When he turned to crime to make some money, Jesse became known as the Trickster, a rival of the Flash and a member of the Rogues—a band of costumed criminals operating in Central City under a strict code of conduct.

Much later, Jesse experienced a change of heart and began working with the FBI to help catch criminals like himself. He put his old tech in storage, which allowed newcomer Axel Walker to break in and steal it. With Jesse’s old tricks at his disposal, Walker became Central City’s new Trickster.

Neither Axel Walker nor James Jesse is a metahuman. They rely on their repertoire of technological gadgets and gags to give them the upper hand in any fight they may find themselves in. Most famously, Jesse invented a pair of shoes to allow him to literally walk on air, which he employed in a great number of his heists. These shoes were later stolen and used by Walker. 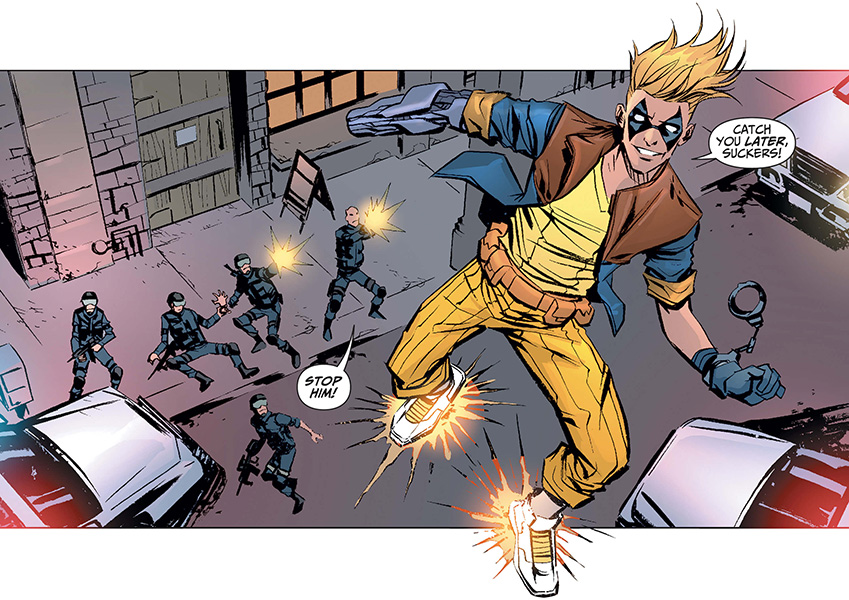 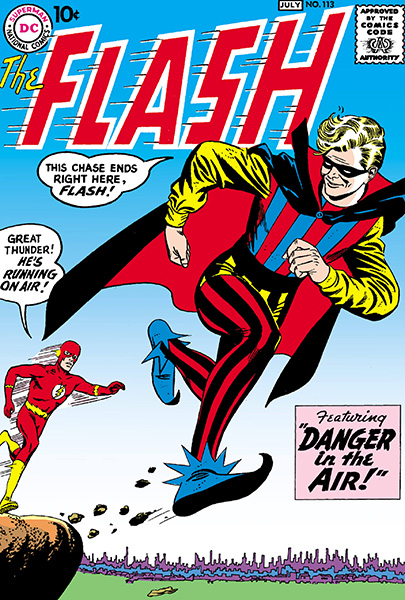 Giovanni Giuseppe adopted the name James Jesse as a tribute to his favorite Western character, Jesse James. He and his family worked as circus performers. For anyone else, this may have been enough excitement, but not Jesse. He wanted more, and a quick and easy way to make some extra bucks.

Jesse invented technology that allowed him to pull off fantastic cons. He attempted to rob Central City blind and became a member of the Rogues, the enemies of the Flash, though his early alliance with them didn’t last long. Seeking even more excitement, Jesse left town for still bigger rewards. He zeroed in on the production of a film called Blue Devil, aiming to steal the costume of the actor playing the title role. But something went awry during filming, and the actor, Dan Cassidy, wound up fused to the suit. Cassidy became the DC Super Hero known as Blue Devil (FIRESTORM #24, 1984). Jesse and Cassidy reconnected several times over the years. The two bonded over their mutual interest in stunt work, and Cassidy’s benign influence helped Jesse move away from crime.

Unfortunately, Jesse’s change of heart wasn’t permanent. During the events of 1995’s UNDERWORLD UNLEASHED, he returned to Central City and began plotting a new grift that would put him back on the map. This con involved the summoning of a demon lord named Neron. When Jesse realized the true scale of Neron’s threat, he conned the demon back into Hell—pulling off the greatest “trick” of his career, but one unknown and uncelebrated by the public.

Later, Jesse wound up working closely with the FBI, trying to prevent the confiscated gadgets and weapons of Super-Villains from falling into the wrong hands. Unfortunately, karma would have the last laugh, as Jesse’s own weapons were eventually stolen and his mantle taken over by Axel Walker, the second Trickster.

His “replacement,” however, was short-lived, and Jesse operated as the Trickster once more after placing Walker behind bars.

After stealing Jesse’s gear, Axel Walker took on the role of the Trickster, which almost immediately brought him into conflict with Jesse himself. The two fought for the name and identity, and Jesse was eventually victorious, though Walker was anything but deterred.

After breaking out of prison, Walker came face to face with the Flash in Keystone City, and was quickly defeated (TEEN TITANS #7, 2004). But the events of 2008’s FINAL CRISIS left Jesse dead, and Walker seized the opportunity to become the Trickster again. He attempted to join the Rogues, but unfortunately for him, his efforts were cut short by 2011’s FLASHPOINT, which reset the continuity of the DC Universe. 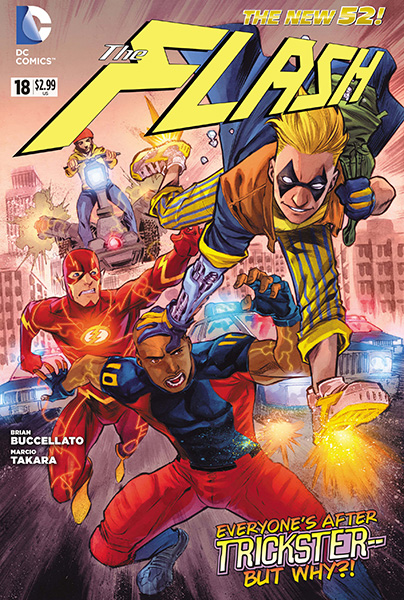 Following FLASHPOINT, Walker became the only Trickster operating within the DC Universe. His backstory was modified slightly so he’d no longer stolen Jesse's gadgets, and instead was recruited by the Rogues as a young man.

Eventually he was fired from the team (THE FLASH ANNUAL #1, 2012) and joined a criminal organization called Mob Rule, in which he worked as a henchman. He returned to the Rogues in 2013’s FOREVER EVIL event.

Following the events of 2016’s DC UNIVERSE REBIRTH #1 (in which DC Universe continuity was again reset), Walker has been seen as an inmate in Iron Heights Penitentiary, maintaining his identity as the Trickster.