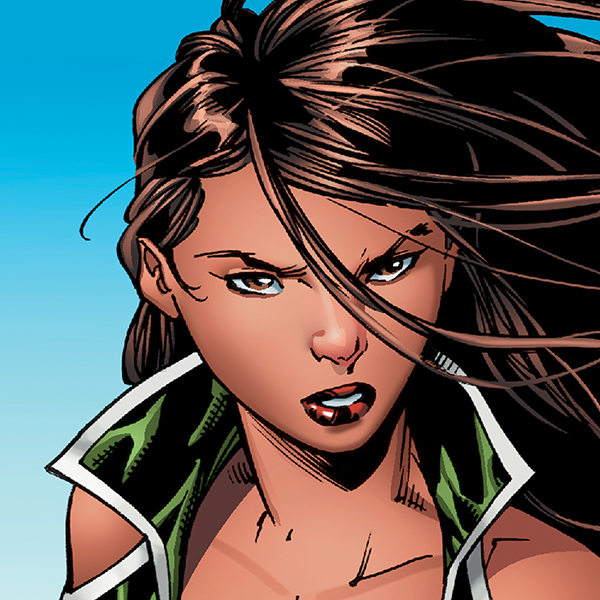 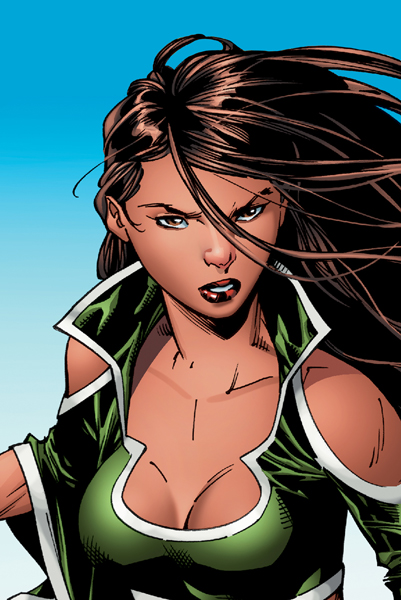 One of the world’s greatest spymasters, Talia is a woman perpetually caught between the visions of the two most important men in her life: her father, Ra’s al Ghul, and her Beloved, Batman.

One of the world’s greatest spymasters, Talia is a woman perpetually caught between the visions of the two most important men in her life: her father, Ra’s al Ghul, and her Beloved, Batman.

“Talia,” as The Demon’s Daughter has simply been called for most of her history, has lived an extremely gendered life. Born into the highest echelon of the ancient and patriarchal League of Assassins, Talia could have had all the power in the world if not for the unfortunate happenstance of being born a girl. For most of her life, Talia was led to believe that the only way to secure the power lost to her by birth was to find a suitable male partner, and produce a son. But having accomplished both romance with her perfect man and the birth of a perfect heir, Talia was still left wanting. Once Talia took her destiny into her own hands, she became something more far powerful than even her venerable father could ever imagine. 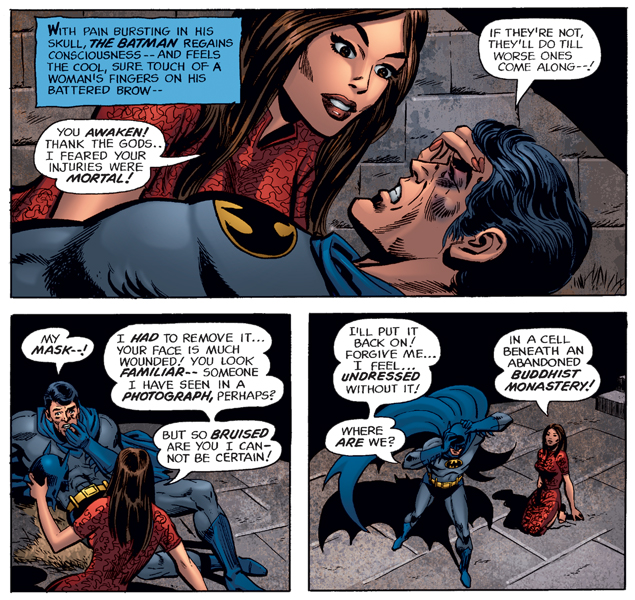 In the Summer of Love, Ra’s al Ghul, the impossibly ancient leader of the League of Assassins, conceived a child with a vibrant, epicurean hippie he encountered at the Woodstock music festival. The child born from their union was named “Talia,” an old semitic name for the morning dew. When Talia’s mother died from a drug overdose, it was up to the lord of this ancient order who turned the world over the centuries to his grand design to raise his child himself. As the product of a patriarchal society, Ra’s al Ghul knew that he could not give the world he had built to his daughter, and spent years seeking a man of mythic quality who could even begin to be worthy of the value he placed so highly upon his daughter. Ra’s al Ghul found that man, one of singular skill, strength, mental fortitude, and razor sharp vision, in Gotham City’s Dark Knight Detective: the Batman. 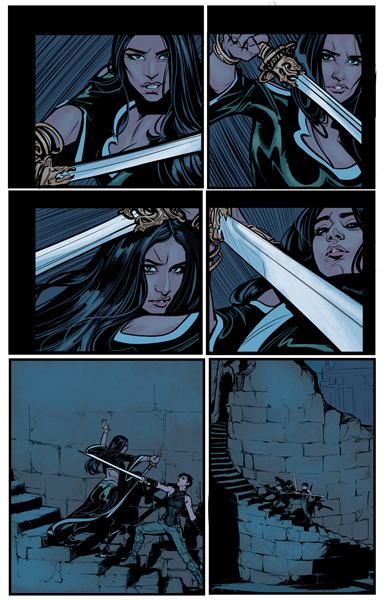 Raised in the shadow of her father, Talia is a natural born leader and would be in charge of one of the oldest and most powerful orders in the world today if not for the circumstances of her gender. On her own, Talia built the global super spy network of Leviathan, holding the world’s intelligence in her hands. Thanks to her background with the League of Assassins, Talia is also exceptionally proficient in martial arts and many forms of weaponry. 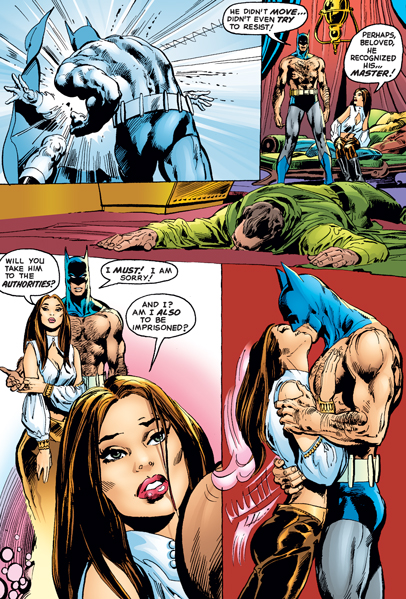 Batman actually encountered Talia for the first time in 1971’s DETECTIVE COMICS #411, before even meeting her more famous father. Talia first appeared in her “Beloved’s” life playing the role of damsel-in-distress, as a captive of Dr. Darrk — the supposed leader of the League of Assassins, later revealed to be an upstart underling. Talia was immediately smitten by the dashing Caped Crusader, and it would be a lie to say he didn’t quickly harbor feelings for her in turn.

In BATMAN #232, Talia’s father Ra’s al Ghul casually strolled into the Batcave to inform the detective that both his daughter and his own sidekick Dick Grayson had been captured by a malicious third party, and only together could he and Batman recover them safely. After braving a series of challenges, Batman came to the discovery that it was Ra’s himself who had organized the kidnapping as a final test of Batman’s worthiness to marry his daughter. Batman rejected Ra’s al Ghul’s offer to become his new heir to the League of Assassins, but elected to begin a romance with Talia on his own terms — one which would eventually lead to the birth of his son.

With Batman too obstinate to take Ra’s al Ghul’s place, the Demon’s Head sought a new suitor for Talia: the monstrous Bane, who proved himself capable by infamously breaking Batman himself in “Knightfall.” Though rejected by Talia, Bane too was smitten by the lovely Demon’s Daughter, and has held a candle for her ever since. (“Batman: Legacy,” 1996)

After their passionate union, Talia’s unrequited love for Batman was sublimated by a chance to redeem his greatest failure: the death of Jason Todd. After the cosmic accident of “Infinite Crisis” retroactively returned Jason’s body, but not his spirit, Talia spent years nurturing Jason back to physical and mental health before he was ready to return to Gotham (with, naturally, a little bit of help from the League of Assassins’ notorious life-restoring Lazarus Pits). Bonds were formed, a few mistakes were made, and Jason was reunited with Batman — truly alive, but not quite the same. (RED HOOD: THE LOST DAYS, 2010) 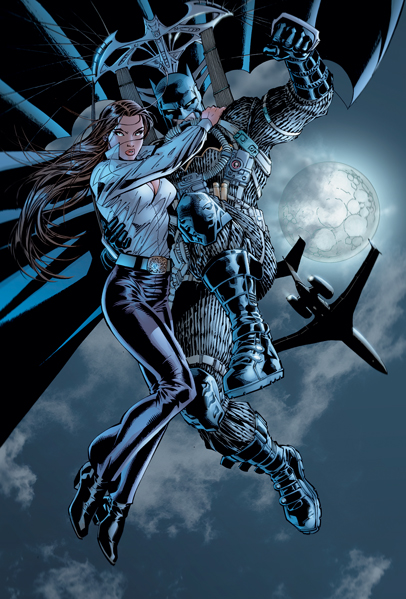 Eventually, Talia tired of being a pawn in her father’s game with Batman, and moved to Metropolis to make a new life away from either of the men who loomed over her existence. She took on the name Talia Head, a cheeky reference to her father’s chosen sobriquet. She had no idea that she would find the chance to define her purpose from the proposal of yet another man: presidential hopeful, Lex Luthor. With the need to divest himself of private interests as he ran for the highest office in the land, Luthor offered Talia the chance to run LexCorp in his stead — finally allowing her to grasp the status and power denied by her chauvinistic father. (PRESIDENT LUTHOR: SECRET FILES AND ORIGINS #1, 2001)

Talia agreed to this proposal, though perhaps not for the reasons Luthor imagined. With all of Luthor’s assets under her control, Talia worked behind the scenes to undermine Luthor’s power, using his misplaced trust in her to ultimately end his presidency with the assistance of Batman and Superman. (SUPERMAN/BATMAN #6, 2004)

A major turning point arrived in Talia’s life with the resurgence of her older half-sister, Nyssa (BATMAN: DEATH AND THE MAIDENS, 2003-2004). With a vendetta against their father for destroying her family, Nyssa captured and brainwashed Talia into seeing both her father and her Beloved Batman as her enemies: a notion which she would never quite completely shake ever again. Together, Nyssa and Talia were successful in burying their father — though the Demon’s Head has a habit of returning from death.

In Ra’s al Ghul’s absence, Talia assumed control of the League of Assassins, and represented their interests in the Secret Society of Super-Villains formed to stage a war on all heroes. (VILLAINS UNITED, 2005) 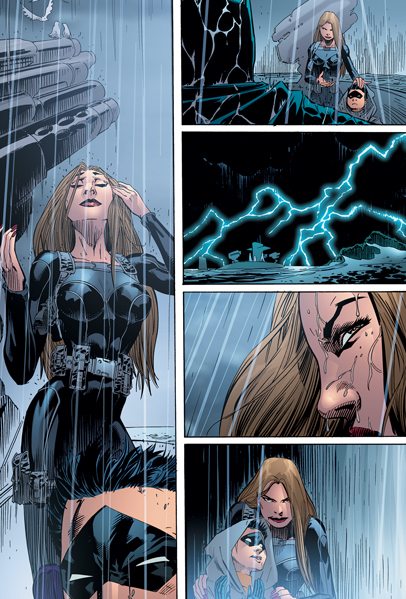 Years after Batman and Talia’s tryst in the desert lands of her father, Talia allowed Batman to learn the result of their union: a child who had been trained thoroughly as the perfect heir to the legacies of both Ra’s al Ghul and Batman himself. His name was Damian Wayne. With his training under the League of Assassins complete, Damian left his home to study the ways of the Bat under a father who had never known him. Their first mission together: an attempt to stop Talia herself from an attack on the British government using a fleet of bioengineered Man-Bats. (“Batman: Son of the Demon,” 2006)

Talia’s relationship with Bruce and Damian was rather complicated thereafter, torn between her bids to expand her father’s influence, and the love she still felt for Batman and her son — one which was complicated further still by Ra’s al Ghul’s inevitable return from the dead, where he once again assumed ultimate control of the League of Assassins. In “Batman R.I.P.,” the estranged Talia and Damian put their differences aside to rescue a Batman in peril at the hand of the Black Glove organization. But while they were successful in their rescue in that case, Talia and Damian were unable to save Batman from being hurled into the time stream by Darkseid’s Omega Beams in FINAL CRISIS. With Bruce’s disappearance, Talia left Damian in the care of Dick Grayson as she refocused her own plans for a future without Batman — but not before secretly embedding a chip in Damian’s spine which would ensure his obedience in a twisted desire to hold onto her son. While Dick and Damian eventually disabled the chip, Talia was not without a backup plan: a cloning facility filled with genetic copies of her son whom she could raise as her own. (BATMAN AND ROBIN, 2009) 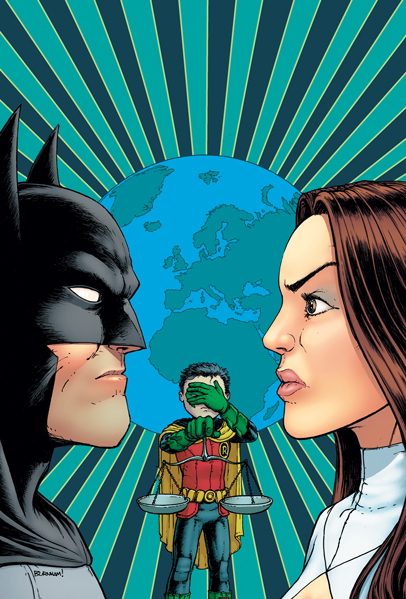 Talia’s long laid plans came to fruition just in time for Batman’s return from the time stream and his formation of the international “Batman, Incorporated”, in the form of a spy network whose power and influence eclipsed that of even her father’s League of Assassins. Talia named this organization “Leviathan,” for the great ancient scriptural beast who lurks beneath the murky depths. Batman, Incorporated waged battle against Leviathan and its many subsidiaries across the world. This global shadow war came to a head when Damian was killed by an agent of Talia’s called “The Heretic” — one of Talia’s flash-grown adult clones of Damian himself. Despite acting on Talia’s orders, the spymaster of Leviathan killed The Heretic for murdering her trueborn son. Following the tragedy of Damian’s death, Batman, Incorporated brought the battle to Talia’s doorstep. The fatal blow against Talia herself was struck unexpectedly by Kathy Kane, the original Batwoman.

Following the deaths of Damian and Talia, Batman and Ra’s al Ghul embarked on parallel quests for the return of their children. Damian was returned to life after a journey which took Batman to Apokolips and back, while Ra’s returned his daughter to life upon an expedition to the mystical city of Nanda Parbat. (ROBIN RISES: ALPHA, 2014) 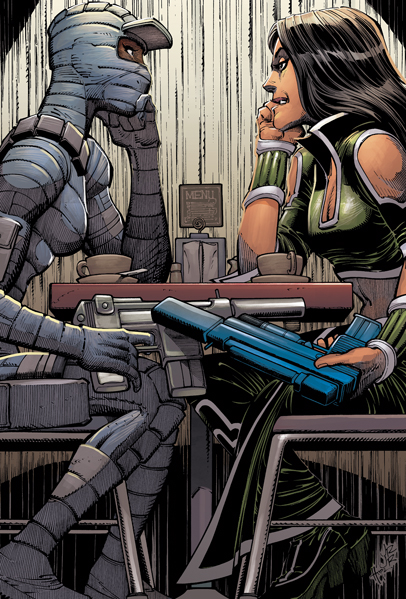 Talia returned from the dead to find that the Leviathan she had built was in complete disarray following her death. The Spyral organization it oversaw had been infiltrated by Dick Grayson and commandeered by Helena Bertinelli (GRAYSON, 2014), and her former lieutenants were locked in a bloody internal struggle for dominance. Talia’s first order of business, however, was to mend bridges with her resurrected son, and join him in the battle against a mutual enemy — the Lazarus Pit hunting order known as the Lu’un Darga (ROBIN: SON OF BATMAN, 2015). Second was her approval of the relationship between Batman and his new beloved, Selina Kyle, which she granted upon testing her devotion in combat (BATMAN #33-35, 2017).

With her amendments made, Talia returned to the task of reassuming control of what she had lost, by calling a long lost operative back onto the field... her most capable pupil, Honor Guest — alias, The Silencer. But Honor Guest had already built a family of her own, and fought Talia tooth and nail to hang onto her hard-won freedom (THE SILENCER, 2018).

Ultimately, Leviathan was united as an even more powerful force than ever before, eliminating rival spy networks across the world in a quest for global transparency. But Talia, surprisingly, had nothing to do with it: the organization that the Demon’s Daughter had so carefully crafted with her own hands was now under the control of Mark Shaw, formerly the vigilante known as Manhunter (EVENT LEVIATHAN, 2019). In the meantime, Talia had assumed control of another group which the League of Assassins feared even more than Leviathan: Lady Shiva’s infamous internal organization, the League of Shadows. With the shadows at her back and a reforged relationship with Damian at her side, Talia now faces the great beast of Leviathan she bore into the world.