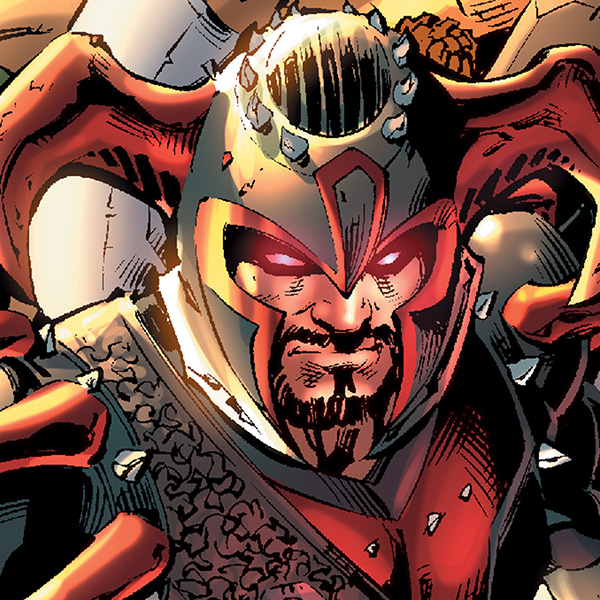 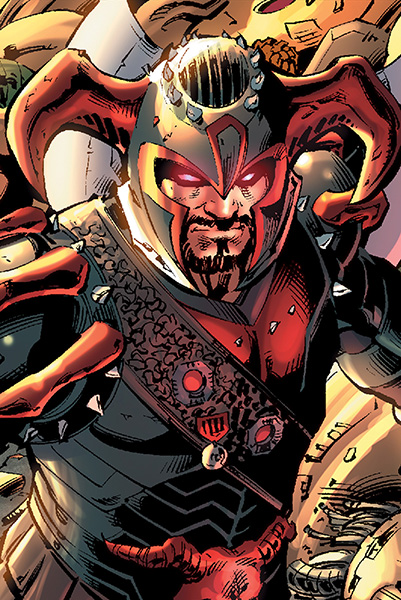 The uncle of Darkseid, and one of his most fearsome allies, Steppenwolf is the war-hungry military leader of Apokolips.

The uncle of Darkseid, and one of his most fearsome allies, Steppenwolf is the war-hungry military leader of Apokolips.

Darkseid might be the most corrupt villain in the DC universe, but if there’s a close runner-up, it’s the ruler of Apokolips’ uncle, Steppenwolf. The commander of Darkseid’s military forces, it’s Steppenwolf’s hands most worlds feel around their throats before Darkseid claims them as his own.

The younger brother of Queen Heggra of Apokolips (Darkseid’s mother), Steppenwolf is a loyal servant to his monstrous nephew. He was therefore made a high-ranking member of Darkseid's Elite, along with the likes of Granny Goodness and DeSaad. When Darkseid arranged Heggra’s death, Steppenwolf had no problem switching allegiances to her twisted son.

There is nothing that Steppenwolf enjoys more than the brutal subjugation of others. For hundreds of thousands of years, he’s led armies of winged Parademons, with his electrically charged ax in hand, making sure world after world fell under Darkseid. Although he’s been killed in battle many times, Darkseid always uses his power to bring his favorite uncle back to life, insuring Steppenwolf is ever ready to crush more innocents in his name.

One of the ancient cosmic beings known as the New Gods, Steppenwolf is the brother of Queen Heggra of Apokolips, and was the commander-in-chief of Apokolips' military forces during her rule, just as he had been during the reign of Heggra’s husband, Yuga Khan. Their son Uxas, who would eventually become known as Darkseid, would also place Steppenwolf in charge of Apokolips’ military.

On one occasion, Darkseid sent Steppenwolf to their sister world of New Genesis, where he killed their leader Izaya's wife, a woman named Avia. Izaya, later known as Highfather, swore revenge, and later killed Steppenwolf in the resulting war between Apokolips and New Genesis. Ultimately, however, Steppenwolf was resurrected, and resumed his command. 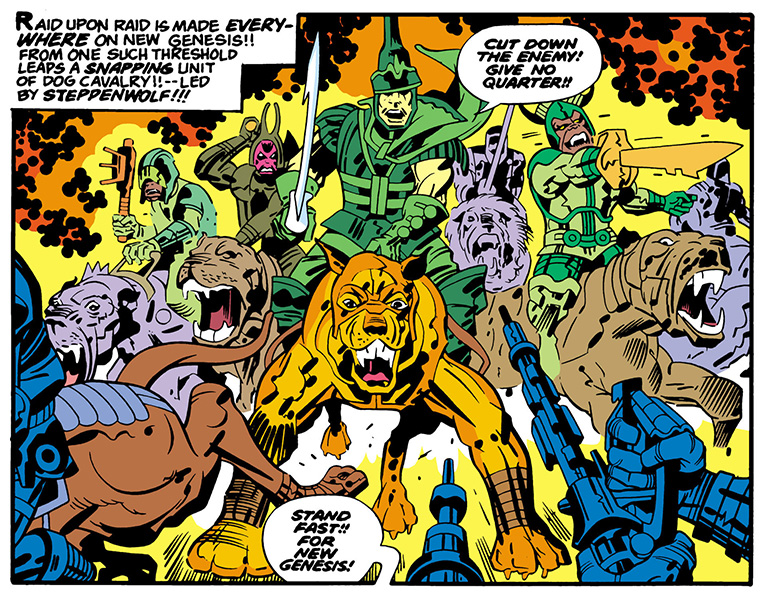 Steppenwolf's chief role as commander of Darkseid's army is his training and deployment of the Dog Calvary, a fierce legion of giant demonic canines, sometimes called the Hunger Dogs. Steppenwolf trained the huge Apokoliptian beasts as well as the slaves who work in Darkseid's military. His best fighter in the Dog Calvary was Canis Major. When Canis Major had a son, Canis Minor, he attempted to train the boy how to be a warrior. Eventually the boy killed his father and took his place as the second Canis Major, giving Steppenwolf a remorseless new perfect soldier. 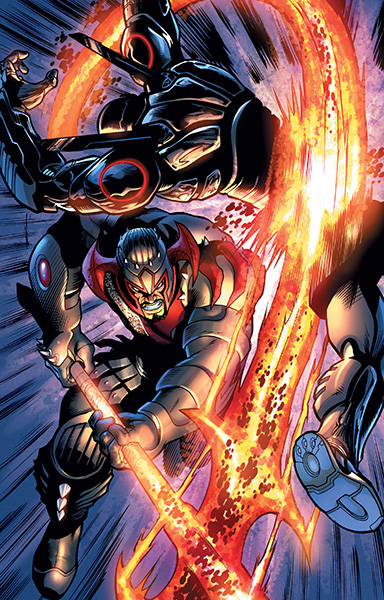 Steppenwolf is a member of the race of beings known as the New Gods. Thanks to his people’s close proximity to the Source Wall, he’s an immortal who exhibits superhuman strength, speed, reflexes and stamina. He’s also an incredible fighter and a master of the art of swordsmanship. As a military commander and strategist, he has almost no equal in the known universe.

For an eternity, Steppenwolf has served as the leader of Darkseid’s military forces, and usually commands his army, the Dog Calvary, into battle himself. Steppenwolf uses many different kinds of weapons when conquering planets for his master, including a cable-snare with which he can trap his enemies. His favorite weapon, however, is his electro-axe. It is an instrument of death that is always by his side, ready to strike terror into the hearts of those his master has chosen to be conquered. 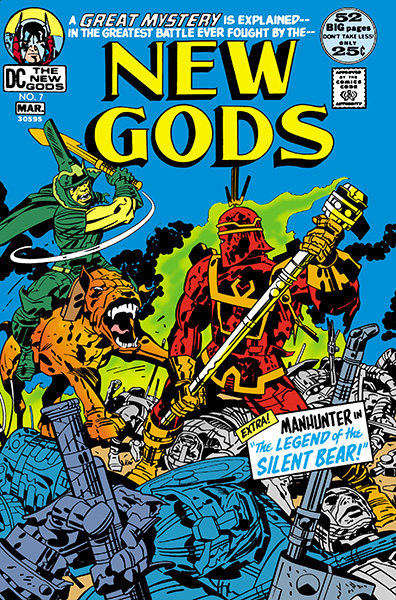 Steppenwolf’s first appearance (in 1972’s NEW GODS #7) is actually a story told in flashback. Here it was revealed how Darkseid manipulated Apokolips into war by having his uncle Steppenwolf murder Avia, the wife of New Genesis’s ruler Izaya. A bloody conflict then arose between the worlds of New Genesis and Apokolips. In New Genesis’s retaliation, Darkseid’s world was devastated, and Steppenwolf was killed. Nevertheless, Darkseid would later resurrect Steppenwolf using his Omega Effect whenever he pleased, assuring that he would always be around to command his forces.

During the countdown to the cosmic event known as the Final Crisis, the New Gods of New Genesis and Apokolips were killed off in a long-foretold conflict. Not long after, all of them were reborn on Earth in new forms, as a gang of criminals operating from a place called “the Dark Side Club.” 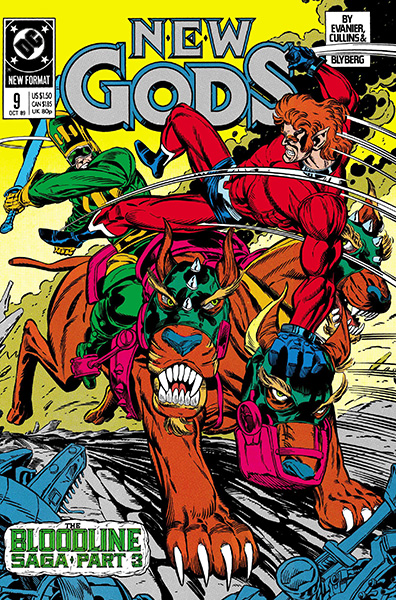 Among the cruelties on display at the Dark Side Club were metahuman gladiatorial fights. Steppenwolf, a member of the club’s board, did not appreciate the way the criminal known as Clock King had been using unpredictable metahumans as fighters in his arena. But Clock King, weary of the once proud warrior, decapitated him. It was an ignoble end to such a planetary terror. But Steppenwolf would rise again in a new universe, more fearsome than before.

In the wake of 2011’s Flashpoint event, the history of the New Gods was altered. In this new reality, Darkseid invaded the universe of Earth 2 before setting his sights on the Prime Earth, and it was his uncle Steppenwolf who led an armada to the parallel world in what would eventually be named the Apokolips War. Steppenwolf’s invasion of Earth was so thorough, that he killed Earth 2's Wonder Woman and Superman during their final attack against him.

Steppenwolf retreated after Batman sacrificed his life to send all of Steppenwolf's legion of Parademons back to Apokolips through the Boom Tubes. Stranded on Earth 2 and unable to return home, Steppenwolf spent the next five years in hiding. 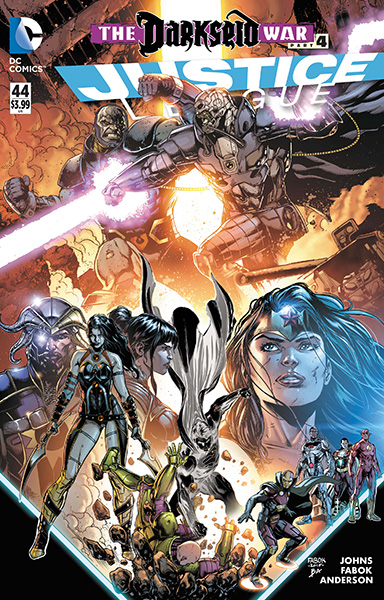 With the help of his half-Amazon daughter Fury, Steppenwolf conquered and declared himself absolute ruler of Earth 2. But, moments after doing so, he was killed by Brutaal, a twisted clone of Superman. Darkseid would later find a way to resurrect his evil uncle during the Darkseid War.

Following the continuity-changing events of 2016’s DC UNIVERSE REBIRTH #1, Steppenwolf has not yet been seen in the DC universe. Though it’s only a matter of time before Darkseid resurrects his favorite uncle to lead his forces once more against the heroes of Earth.