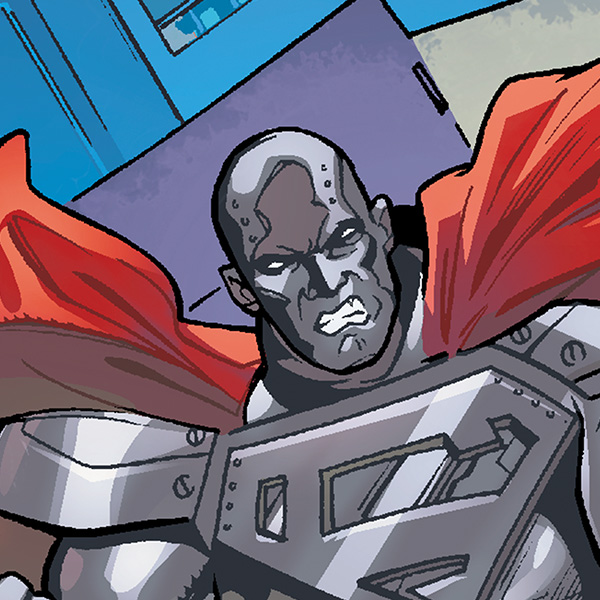 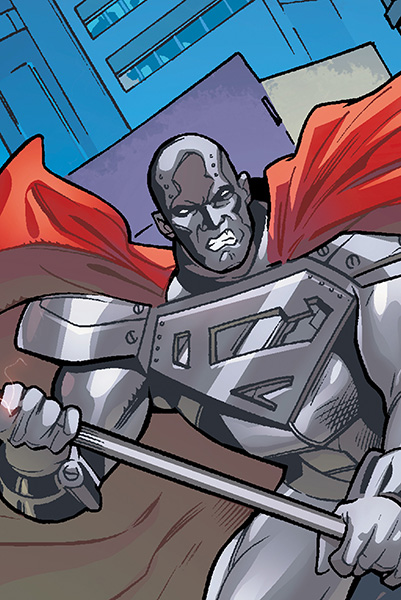 Inspired by Superman's selflessness, John Henry Irons used his engineering genius to reinvent himself into a champion in his own right.

Inspired by Superman's selflessness, John Henry Irons used his engineering genius to reinvent himself into a champion in his own right.

The perfect combination of brains and brawn, John Henry Irons was one of four different people to take up the mantle of Superman when the World’s Greatest DC Super-Hero lost his life while saving Metropolis from the monster known as Doomsday. Initially referred to by the media using Superman’s nickname “The Man of Steel,” Irons simply went by Steel when Superman came back from the grave.

A former weapons engineer, John Henry Irons moved to Metropolis to start a new life. There, on one fateful day, Superman saved his life. Forever grateful, John Henry paid it forward when the city’s protector died. He took up the fight to protect the innocent in Superman’s name, wearing his iconic “S” Shield in tribute.

Irons used his scientific genius to construct a suit of armor that allowed him to fly and gave him superior strength. He also created a giant metal hammer in homage to his namesake, the African-American folk hero John Henry. Now a permanent member of Superman’s extended family, Steel is living proof that anyone can be a Superman. 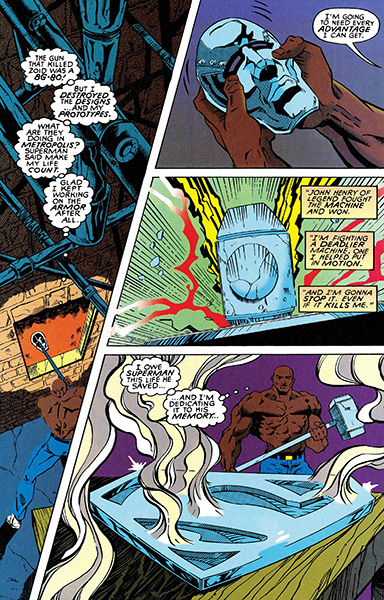 In his younger days, John Henry Irons was a brilliant weapons engineer for the AmerTek Company. As he realized the massive destructive power his inventions had, he decided to abandon his trade. Fearing AmerTek would never let him go, Irons faked his own death and moved to Metropolis. There, he chose the simpler life of a construction worker. One day, while working on a high-rise building, John Henry fell to a certain death – but was saved by Superman. As he wondered how he could ever repay him, Superman told him, “Live a life worth saving.”

John Henry Irons took those words to heart. When Superman fell in battle fighting the alien creature Doomsday, he used his scientific genius to create a suit of armor – a highly advanced exoskeleton that mimicked Superman’s strength and invulnerability. He took it upon himself to carry on as Superman, instantly winning the hearts and minds of millions of Metropolis citizens as the new “Man of Steel.” Even Superman’s fiancé Lois Lane had to wonder if somehow Clark Kent’s spirit had manifested itself in this new hero.

When the real Superman returned to life, John Henry Irons quickly became his staunch ally, rechristening himself Steel.  Along with Superboy and Supergirl, he helped protect Metropolis whenever Superman was indisposed, and became a part-time member of the Justice League. 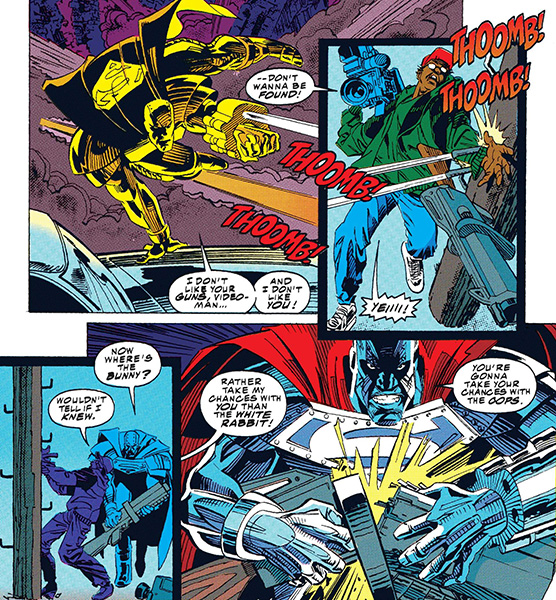 John Henry Irons is an ordinary man with no known metahuman powers. Because of his genius-level intellect, however, he was proficient in the field of engineering, and able to build a high-tech suit of exoskeletal armor, which gave him super-strength and the ability to fly.

John Henry also wields a large metallic "smart hammer.” This weapon hits harder the farther it is thrown, can fly on its own, and even has its own on-board computer guidance system. The giant hammer is an homage to his namesake John Henry, the African-American folk hero.

During the events of 2006's 52, Lex Luthor injected Steel with the formula of the Everyman Project, and he developed an invulnerable organic steel skin which had the ability to superheat at will. In time, John Henry lost his organic steel powers, and created a new suit of armor. He updated and upgraded this suit whenever new technologies became available to him. 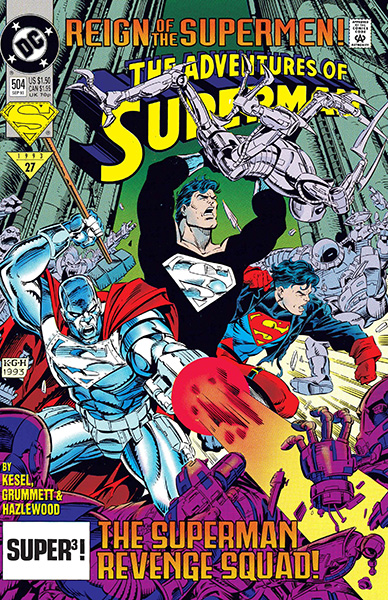 When Superman died in battle with Doomsday, Metropolis needed a new hero to continue his legacy. Although his identity was originally shrouded in secrecy, John Henry Irons quickly emerged as the new Man of Steel, covered in armor that approximated Superman’s super-strength and power of flight.

He also wielded a giant hammer against his enemies. Although there were three other heroes who claimed Superman’s title, Irons was the one who most exhibited the original Man of Steel’s empathy and compassion, earning him the trust of Superman’s friends Lois Lane and Perry White. 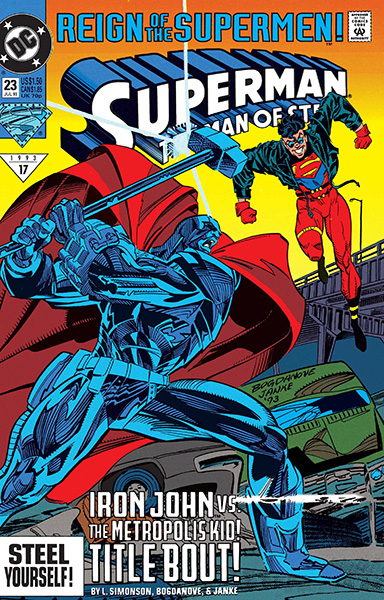 John Henry Irons wasn’t the only hero take on the mantle of Superman after his death. Metropolis also saw the alien-like “Last Son of Krypton,” a youthful new Superboy, and the cybernetic “Man of Tomorrow.” But Cyborg Superman wound up destroying an entire city to show off his power. The three other Supermen teamed up to defeat the cyborg, and were aided by the original Superman when he returned from death. Afterwards, Irons decided to continue his career as Steel. 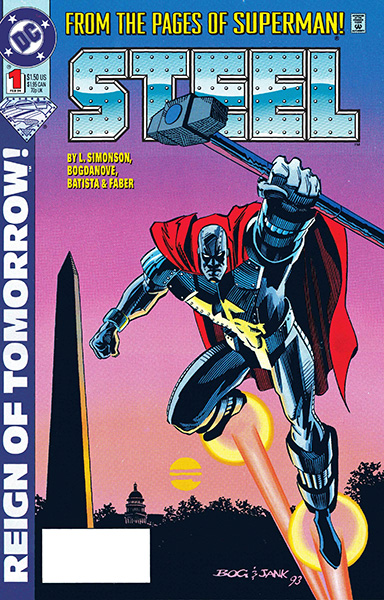 After Superman returned to the land of the living and again became Metropolis’s primary protector, John Henry Irons decided to move back home to Washington, D.C. Believing his old company AmerTek had perhaps forgotten about him in the five years since he’d faked his death and left town, he soon learned how wrong he was.

During this time, John Henry reconnected with his family, including his grandparents Butter and Bess, his sister-in-law Blondell, her second son Paco, and her foster kids Tyke and Darlene. Most importantly, he reconnected with his young niece Natasha Irons, whose scientific genius equaled his own.

But life did not go smoothly in his hometown. After many fights with AmerTek and other criminal groups like Black Ops, John Henry’s life was turned upside down when his true identity was revealed to the public. Moreover, his grandmother Bess was killed while caught in the crossfire of a battle. With his life in shambles, John Henry Irons decided to leave Washington D.C. for good. After he returned to Metropolis, Natasha Irons eventually took up the mantle of Steel. 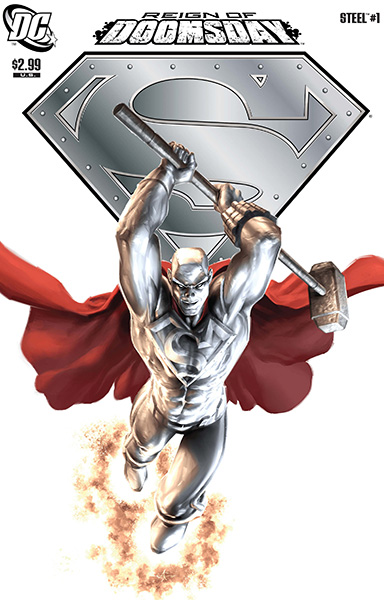 In the post-Flashpoint DC universe, John Henry Irons had a very different introduction to the world of being a DC Super Hero, and to Superman himself. This John Henry Irons was introduced as a scientist under the employ of General Sam Lane for the government’s Metal-0 Project, which sought to create an armored super-soldier who could go toe-to-toe with Superman (who’d just debuted in Metropolis).

John Henry, however, was so disgusted when he saw how the project’s newly hired scientist Lex Luthor tortured the recently captured Superman, that he quit. Not long after, the alien intelligence known as Brainiac attacked Metropolis. In response, John Henry Irons decided to don the prototype Metal-0 suit, and managed to stop him with a computer virus of his own making. Thus began his career as the New 52’s Steel.

After the events of 2016’s DC UNIVERSE: REBIRTH #1, much of Steel’s original history appears to have been restored. In the Rebirth universe, he wore a variation of his original armor, and dated Clark Kent’s childhood best friend Lana Lang – who acquired powers of her own, and became the adventurer known as Superwoman. 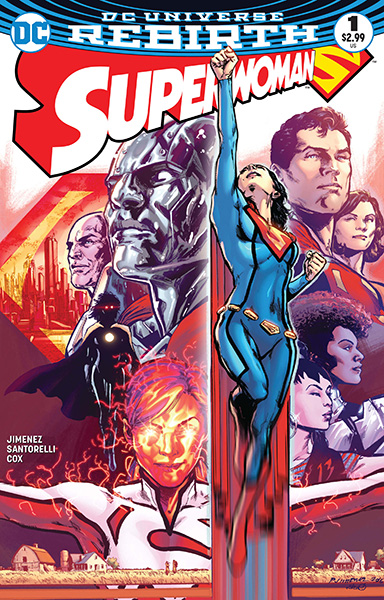 When Lana lost these powers, John Henry and his niece Natasha created a power suit that replicated her previous abilities, allowing her to continue in her role as super hero.