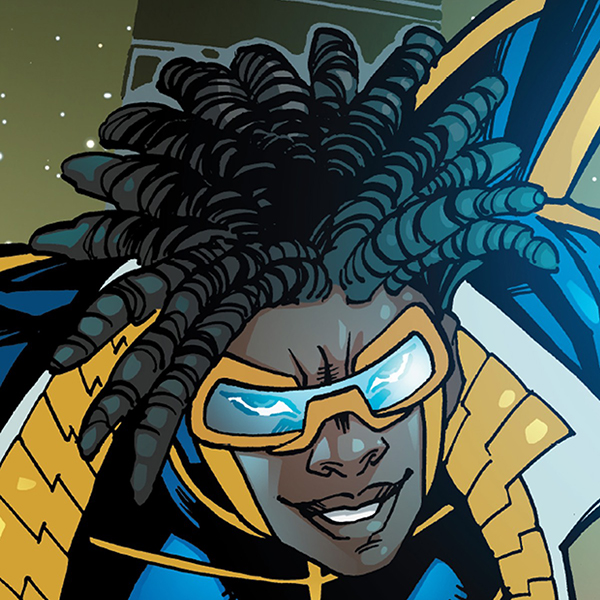 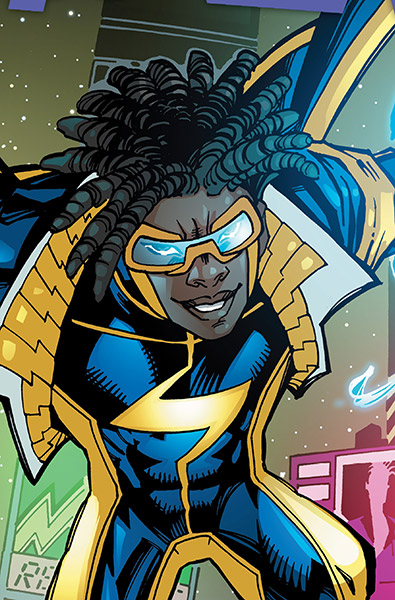 A former Bang Baby who wields the power of electromagnetism, Virgil Hawkins helps the helpless as a solo hero and as a member of the Teen Titans.

A former Bang Baby who wields the power of electromagnetism, Virgil Hawkins helps the helpless as a solo hero and as a member of the Teen Titans.

Electromagnetism isn’t your everyday superpower. But the ability to manipulate electrically charged particles is exactly what powers Virgil Hawkins. In between his studies and his after-school internship at S.T.A.R. Labs in New York, this brilliant but at times awkward high school student finds his extracurricular time taken up with rescuing his friends and saving the city as the DC Super Hero Static.

In his hometown, the midwestern city of Dakota, Virgil was once affected by nerve gas used by police in a street fight. The gas contained Quantum Juice, a toxin that infused Virgil with electrifying powers, enabling him to control and create electromagnetic phenomena.

Virgil is as dedicated to his family as he is to stopping crime. Armed with sick burns to equal his high voltage, this dynamo uses humor to keep his cool even while hurling electrified smackdowns at anyone threatening his turf. His intellect and electrical capabilities make him a high-tech superstar, as well as a prime target for technically advanced Super-Villains, complicating his relationships with friends and potential girlfriends. 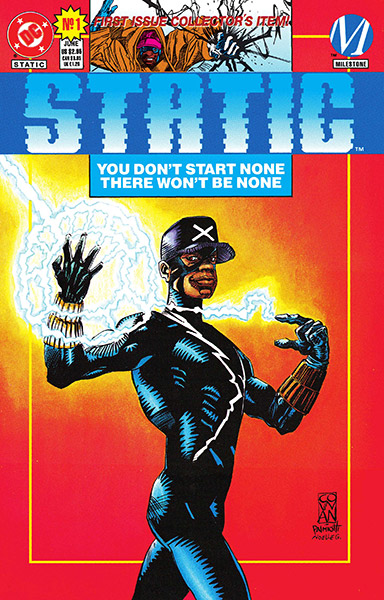 Virgil Ovid Hawkins was a gifted teen growing up in Dakota City, but his smarts often made him the target of bullying. A friend’s wayward advice on how to handle his bully problem landed Virgil in the middle of “The Big Bang,” a massive gang fight. The police quelled the riot with tear gas laced with Quantum Juice, a deadly chemical capable of altering the laws of physics. The deadly gas killed most of the rioters, but Virgil survived, and gained the superhuman ability to control, generate and even absorb electricity. With his new powers, he began a crime-fighting career as an electrifying Super Hero called Static.

The young hero’s abilities attracted the attention of Super-Villains, especially Clock King. Static was captured and brainwashed into serving as a prizefighter for the Dark Side Club. Though he stood as a top competitor, even besting Ravager (a.k.a. Rose Wilson) and her precognizant abilities, his power was hard for his handlers to control, necessitating that he be kept under heavy sedation and locked away. When Miss Martian infiltrated the Dark Side Club and freed the prisoners, Static, fully conscious and fully charged, helped round up the fighting ring’s patrons.

This victory, however, rang hollow for Static. Feeling uncertain about his own identity as a result of being forced to fight against his will, Static was not yet ready to return to his family until he’d fully recovered from his ordeal. Luckily, Static’s heroic efforts didn’t go unnoticed, as Wonder Girl offered him a chance to join the Teen Titans. Seeing an opportunity to connect with a new super-powered family, Static accepted Wonder Girl’s offer and reclaimed his life.

Static possesses the power to generate, manipulate and absorb electromagnetic energy. Such complete control over electricity gives him a wide range of skills. Offensively, he can fire bolts of energy from his body, and his electro-charged punches can knock out even the toughest Super-Villain if they somehow manage to get too close. He can utilize his electrical powers for defensive strategies, too. Static can materialize protective force fields to deflect bullets and energy attacks. The teen hero’s control over electromagnetic fields allows him to levitate the heaviest of metal objects and even to fly, as long as he’s got a metal object to stand on. Even more astounding, Static is in some instances able to heal himself with his electrical powers. His limbs can automatically reattach themselves on the off chance that he loses one in a fight.

In his secret identity as Virgil Hawkins, he’s often unable to use his powers at work or school. But he’s always armed with his intellect, book smarts and sharp sense of humor. His capacity for empathy makes him an emotional cornerstone for his network of family and friends, as well as a valued part of any crime-fighting clan. 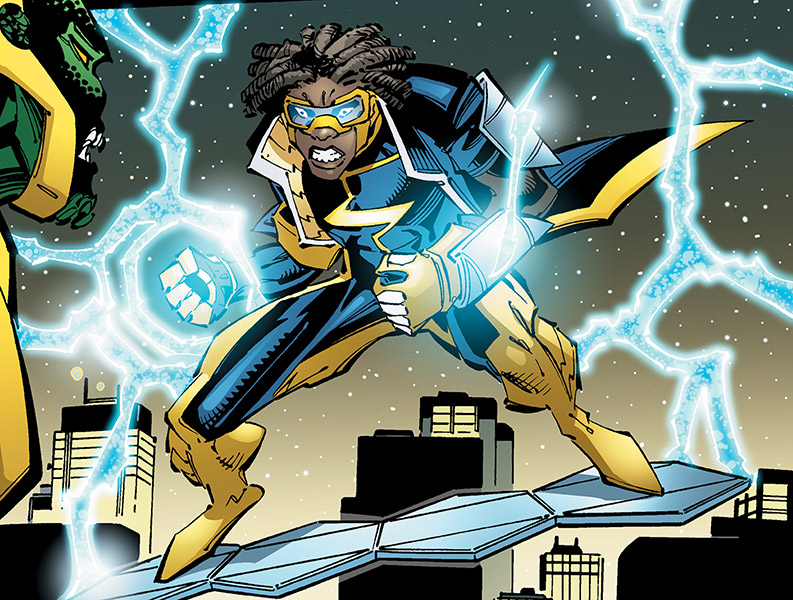 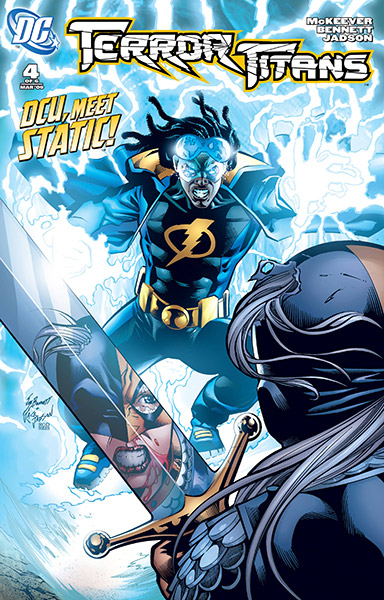 In the buildup to the Final Crisis event, Darkseid enlisted the Terror Titans to capture Static so he could be used as a superhuman gladiator in the Dark Side Club’s metahuman death matches. Forced to enter the tournaments, Static stood out as one of the most powerful fighters, quickly dispatching foes with his ferocious strength. He soon became the club’s ultimate champion. Undefeated, the high-voltage hero proved difficult to control. Static was kept heavily sedated within the lowest levels of the club’s prison.

In an attempt to stage the most sensational match ever, Clock King released Static and set him against Rose Wilson in the ring. The two engaged in an intense battle where Static's lightning-fast punches impacted Rose more than expected, despite her precognitive abilities. After a grueling battle, Static emerged victorious after absorbing all the power from the prison. He momentarily broke free of control only to be sedated once more. Rose freed him, and Static lashed out against his former captors, electrocuting them as they attempted to flee. He then dueled with the electricity-wielding Dreadbolt, ultimately binding him and his fellow Terror Titans in metal.

After escaping the Dark Side Club’s prison with the aid of Miss Martian, Static and several other freed teen metahumans were offered sanctuary with the Teen Titans. During his first visit to the team’s tower, Static struck up friendships and playful rivalries with his fellow visitors. The camaraderie the team offered him, coupled with his belief that his family must think him long dead, convinced Static to accept a position as a Teen Titan.

Shortly after his arrival, the young hero found an opportunity to prove himself a contributing member of the team. When Jericho, a former Titan, set out to kill the Teen Titans by usurping control of Titans Tower, Static saved his teammates by overloading the whole building with his signature electrical charge. Later, a trip down to the ocean went terribly awry when a Super-Villain team called the Fearsome Five kidnapped Wonder Girl. In order to rescue her, Static defeated the villain Rumble by manipulating him into water, thereby increasing the shocking effect that Static’s electrical powers had on him. Static further proved his worth to the Titans by helping his fellow Super Heroes defeat a fearful entity that was wreaking havoc within the soul of former Titan Raven. 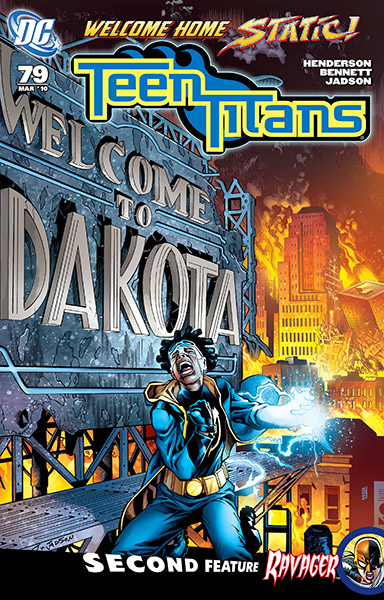 Having learned that a deadly virus ravaged the city of Dakota and infected his sister Sharon, Virgil decided to see his family again. While investigating the source of the virus, he was ambushed by the Super-Villain Holocaust. Imprisoned along with his fellow Teen Titans (Aquagirl, Wonder Girl and Bombshell), Static and the other heroes were rescued by the combined efforts of Cyborg, Kid Flash and Superboy. Static decided he still wanted to be part of the Teen Titans and returned to San Francisco with his Super Hero family.

After expending much of his electromagnetic energy helping Raven, Static returned to Titans Tower only to discover that his powers had completely vanished. Frustrated and frightened by his loss, as well as by his inability to help Miss Martian awaken from the coma she fell into while helping Raven, Virgil attempted to leave the Tower and return to Dakota. With Cyborg’s encouragement, however, Static ultimately decided to travel to Cadmus Labs, partially to support Miss Martian in her recovery, but also in the hope of regaining his powers.

Following the continuity-altering events of Flashpoint, Virgil Hawkins returned with his powers fully restored and resumed his crime-fighting efforts in New York. This time, however, he had to adjust to life in a new school and a new internship at S.T.A.R. labs. He soon uncovered metahuman gang activity, when a technologically sophisticated suit was stolen from S.T.A.R. Static stepped in to help, effectively putting himself in the crosshairs of several vicious crime gangs, all seeking to enhance their standing in the metahuman arms race. Such sinister masterminds as the brutal Piranha and the unpredictable Pale Man all jockeyed to gain the secret behind the Darkstar Defense Force. The battle hit home when the gangs kidnapped Static’s sister Sharon. Virgil’s resolve was doubly tested when he learned his secret identity as Static had been compromised.