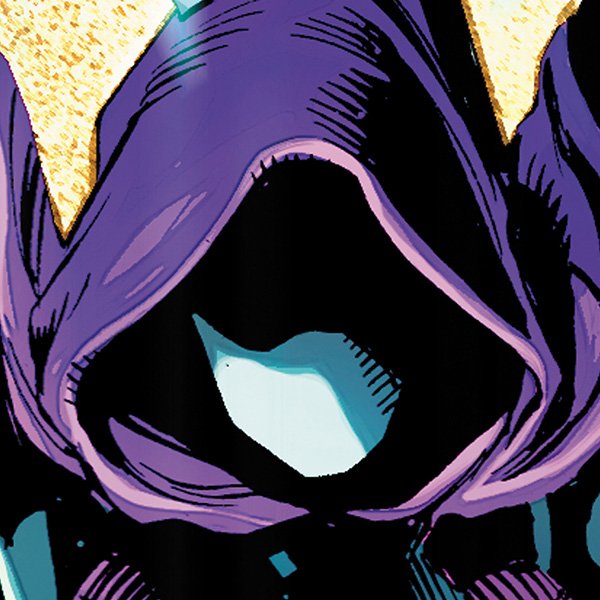 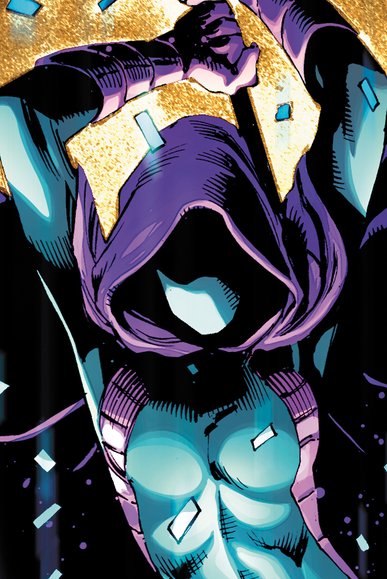 The daughter of a Super-Villain, Stephanie Brown escaped her father's legacy to wear the mantle of Robin, Batgirl, and the Spoiler.

The daughter of a Super-Villain, Stephanie Brown escaped her father's legacy to wear the mantle of Robin, Batgirl, and the Spoiler.

Seeing eye-to-eye with your parents can be a challenge for any teen, but when your father happens to be a Super-Villain in Gotham City? That’s a whole other level of awkward.

Stephanie Brown’s father, Arthur Brown, spent most of Stephanie’s childhood in prison for crimes he committed as the Cluemaster—a second-rate version of the Riddler who could never quite make a name for himself. When he was finally released, claiming he’d been “rehabilitated,” he jumped right back into the Super-Villain game, with no regard for the safety or stability of his family. So Steph decided to take things into her own hands and “spoil” her father’s schemes.

She crafted a Super Hero identity for herself, the Spoiler, and began working to sabotage Cluemaster behind his back, leaking info about his plans to Batman, Robin and even the Gotham City Police, intent on putting her father back behind bars for good. But what started as a mission became her passion: Stephanie fell in love with the Super Hero lifestyle and the people she met. Growing stronger as Spoiler became Steph’s number-one goal.

Headstrong, outgoing and upbeat, Stephanie’s a bit of an outlier in Gotham City’s Super Hero community, but she’s quick to make friends and unwilling to take no for an answer. Her determination and stubbornness has proven both an asset and a detriment as she strives to make a name for herself.

Stephanie began her life as a Super Hero with the goal of putting her father, Cluemaster, back in jail. She did her best to undermine his plans, improvising her way through life-threatening situations—a habit that caught the attention of Batman and Robin. Concerned for her safety, they urged her to leave crime-fighting behind. 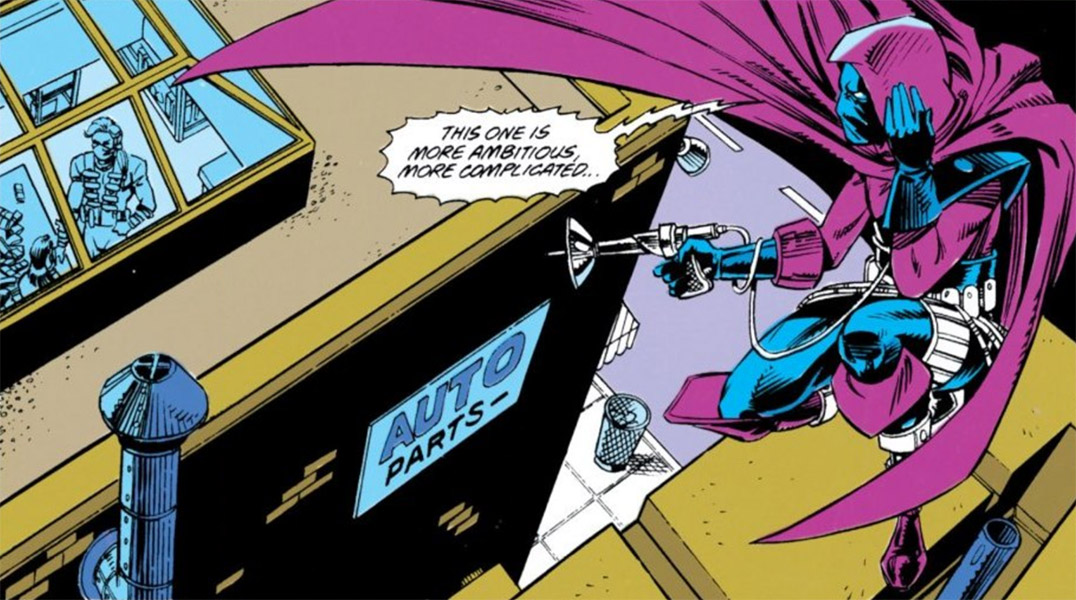 Stephanie, however, was anything but deterred. After shutting down the Cluemaster for good, she began working even harder as a Super Hero. She became close friends with Robin (Tim Drake), whom she had a crush on. The two developed an on-again-off-again relationship that culminated in Batman bringing her into the fold, inviting her into the Batcave and revealing his and Robin’s real identities to her.

From that point on, Stephanie committed herself to her Super Hero lifestyle, briefly adopting the mantle of Robin, and later that of Batgirl, before returning to Spoiler full-time.

Stephanie has no metahuman abilities and instead relies on her acrobatic skills and intelligence to survive in Gotham City. She’s a mostly self-taught martial artist, but her upbringing with Cluemaster taught her far-above-average problem-solving skills. Her weapon of choice is a bo staff, but she’s comfortable using any number of Batman’s gadgets, from Batarangs to the Batcomputer. 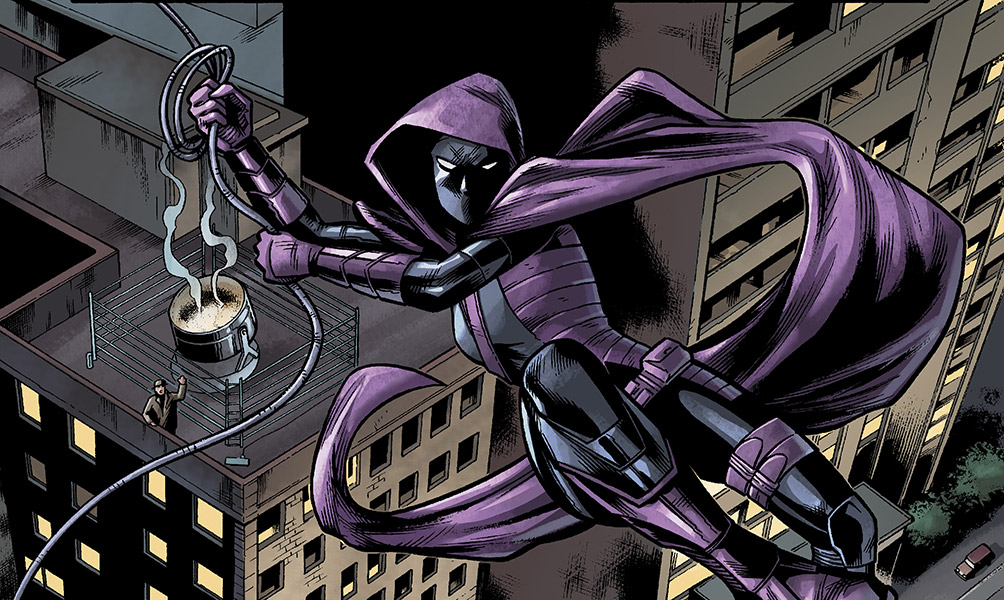 Following her introduction in DETECTIVE COMICS #647 (1992), Stephanie became a recurring character in ROBIN as a love interest and sidekick for Tim Drake. Steph wasn’t shy about her infatuation with the Boy Wonder, and often tried to pressure him into revealing his true identity to her, as she continually showed up uninvited on his patrols around the city. 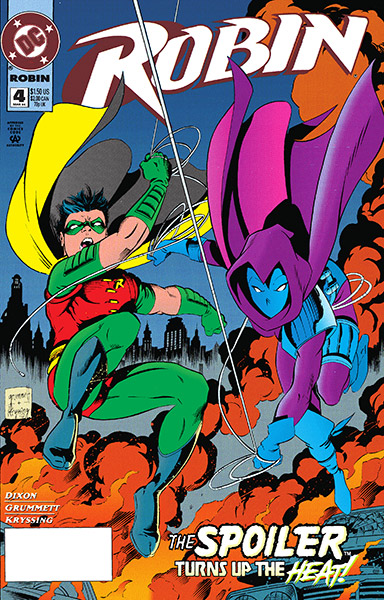 Despite the constant rejection, Steph doubled down on her desire to become a Super Hero on par with Robin, intent on getting him to return her feelings. Eventually he began to see her as an equal—and despite his steady refusal to share his real identity, the two began a strictly in-costume romance as Spoiler and Robin, while Tim Drake continued to live a private life without Stephanie.

But when Steph unexpectedly became pregnant with an ex-boyfriend’s child, Tim was forced to reevaluate his priorities and their relationship. Under an assumed identity, he helped Steph cope with her pregnancy. But before the baby could be born, Gotham City was rocked by a massive earthquake (BATMAN: CATACLYSM, 1998-1999), which caused it to be shut down and cut off from the outside world (BATMAN: NO MAN’S LAND, 1999). These events resulted in Tim and his family moving to Keystone City, leaving Stephanie behind.

Stephanie put the baby up for adoption after it was born (ROBIN vol. 4 #65, 1999) and continued to operate in Gotham City until the No Man’s Land restrictions were removed and things returned to relative normalcy.

Batman took notice of Stephanie’s tenacity, as well as her relationship with Tim. Shortly after the Drake family’s return to Gotham, Batman told Steph that Robin was Tim Drake (ROBIN vol. 4 #87, 2001) and offered to train her alongside the Birds of Prey. The violation of trust caused a rift between Tim and Stephanie, as well as between Tim and Batman.

Stephanie trained for a brief time before Batman decided she was too impulsive and “fired” her, requesting she stop being Spoiler altogether.

But she decided to continue operating as Spoiler in secret. During this time, she and Tim finally reconciled and for the first time began a relationship in their civilian identities. 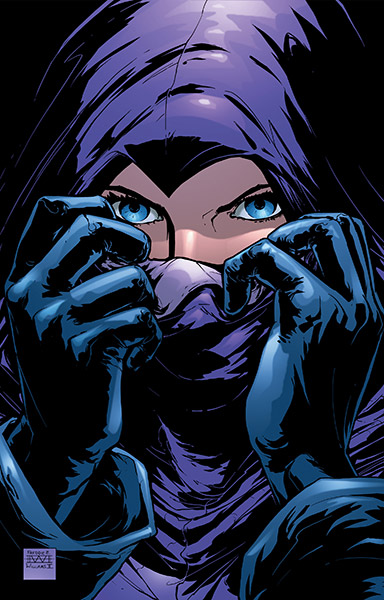 When Tim Drake’s father discovered he’d been acting as Robin, he forced his son to quit the Super Hero business altogether, leaving Batman without a partner. Stephanie jumped at the opportunity. Despite her and Bruce’s rough history, he begrudgingly agreed to take her on as Robin (ROBIN vol. 4 #124-126, 2004).

Steph’s tenure as the Girl Wonder, however, was short-lived. Bruce fired her yet again for disobeying direct orders in the field. Furious and desperate to prove herself, Steph then stole a contingency plan from the Batcomputer in a desperate bid to concoct a scenario in which she could be a hero—not realizing the plan was designed to create a power vacuum in the underworld of Gotham City. The catastrophic BATMAN: WAR GAMES (2004) was the result.

Through WAR GAMES, a new criminal kingpin arose in Gotham: the Black Mask. As Black Mask solidified his position, he caught Spoiler and tortured her for information on Batman.

She refused to break, and Batman soon found Stephanie and brought her to a hospital, but she died from her wounds.

Or so it was believed. It was later revealed (in ROBIN vol. 4 #174, 2008) that Stephanie’s death had been a cover-up orchestrated by Dr. Leslie Thompkins to keep Stephanie and her family safe after the events of WAR GAMES. She’d since been living under an alias in Africa, but was unable to fight the urge to return to being a full-time Super Hero. She returned to Gotham to take up the mantle of Spoiler. 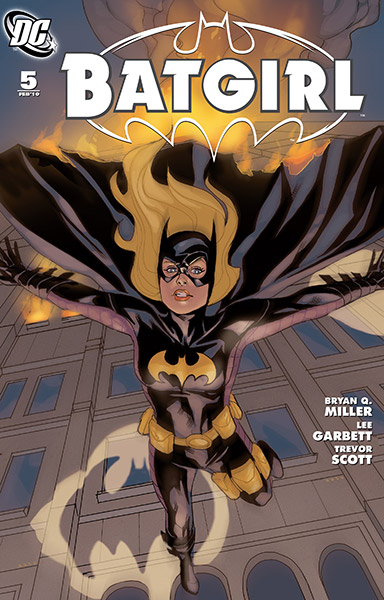 Following the massive shake-up in the wake of Bruce Wayne’s “death” (FINAL CRISIS, 2008-2009) and the resulting BATTLE FOR THE COWL (2009), Stephanie found herself taking on a new role in Gotham City. When the second Batgirl, Cassandra Cain, gave up her mantle, Stephanie stepped in and became the third Batgirl.

She worked closely with Barbara Gordon, the original Batgirl. She maintained her new role until the events of FLASHPOINT (2011) rebooted the continuity of the DC universe.

Stephanie made her first appearance in the New 52 continuity in the BATMAN ETERNAL event (2014), in which she was reintroduced as Spoiler. Most of her original backstory remained, but her time spent as Robin and Batgirl was removed. 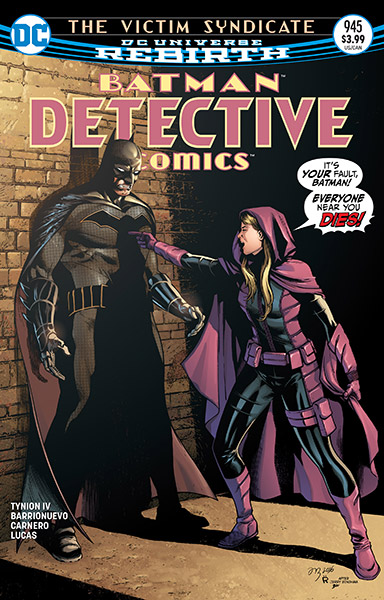 Following DC UNIVERSE REBIRTH #1 (2016), Stephanie joined a team of Gotham-based heroes in REBIRTH: DETECTIVE COMICS. She, Red Robin, Orphan, Batwing and Clayface were mentored by Batman and Batwoman to be the city’s next generation of Super Heroes.

During this time, she and Tim Drake rekindled their romance from the pre-FLASHPOINT continuity.