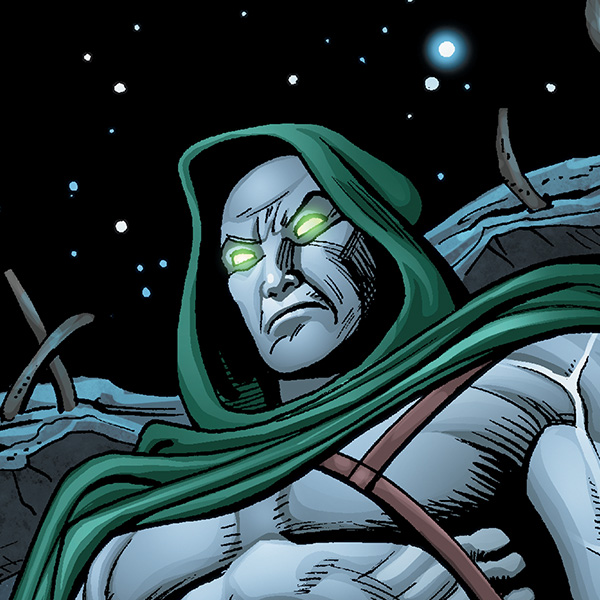 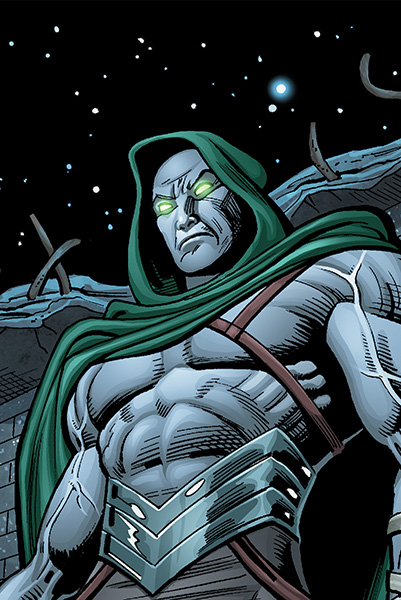 The godlike antihero known as the Spectre has aligned himself with several human spirits in his unending quest for vengeance against the wicked.

The godlike antihero known as the Spectre has aligned himself with several human spirits in his unending quest for vengeance against the wicked.

When someone uses the phrase “Biblical wrath,” whether they know it or not, they are making reference to the mysterious being known as The Spectre. Although he first appeared as one of the so-called “mystery men” in the early 1940s, the Spectre has actually existed since the dawn of time, so referring to him merely as a Super-Hero seems reductive. He is, quite literally, the embodiment of God’s Wrath.

In the mid-20th Century, the Spectre bonded with the spirit of murdered 1940s police officer Jim Corrigan, creating a bond between the human ghost and the eternal spirit, and becoming a crusader for those seeking ultimate justice. Since then, the Spectre has bonded with other human hosts, most notably former Green Lantern Hal Jordan, as well as murdered Gotham City cop Crispus Allen.

This Spirit of Vengeance has used his supernatural abilities to bring about bloody justice to those who have committed heinous crimes. Being an agent of the Presence, his power levels are quite truly off the charts. Even if you are just an average criminal just looking to make a score, pray you never run into the Spectre. Batman will break your bones, but the Spectre will break your soul. 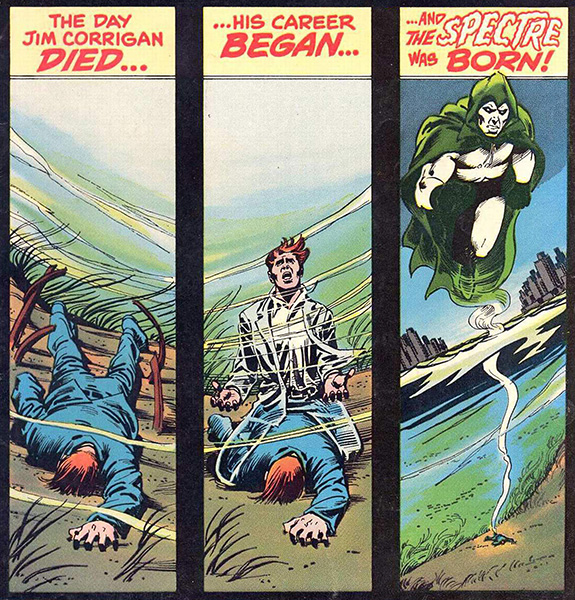 When Lucifer Morningstar rebelled against God, he did not do so alone. Several Angels joined him in his rebellion, and when they lost their battle, they were cast down to Hell, becoming what we now call Demons. One of those demons was known as Aztar, and he went to the gates of Heaven and begged forgiveness for joining Lucifer’s rebellion. The Presence then chose for Aztar to become a vessel for one of his Divine aspects, and this case the Divine Wrath. The Divine Wrath combined with Aztar to form a new being – the Spectre.

From that point forward, the Spectre was God’s instrument of vengeance. He destroyed Sodom and Gomorrah, killed the first-born sons of Egypt, and brought down the walls of Jericho. He was banished to Limbo upon the birth of Jesus, as aspects of God's vengeance and his forgiveness could not co-exist on Earth at the same time. When Christ died on the cross, the Spectre was released from Limbo, and sought vengeance on mankind for killing him. But because of the example set by Jesus, it was decreed by God that all aspects of Himself were now to be bound to human souls. He bonded with an Indian man, and that would be the first of many souls who cried out for vengeance and bonded with the Spectre.

It was in the 1940s that the most well known host bonded with the Spectre. His name was Jim Corrigan, and he was a hard-nosed detective in New York City. Corrigan grew up under an abusive, fundamentalist preacher father, who often taught him that God’s wrath was coming for those who sinned – especially for young Jim. Eventually running away from his father, Jim became arrogant and mean spirited, finding work in the police department. Eventually, Corrigan was murdered by mobster Gat Benson in 1940. As his soul cried out for vengeance, it bonded with the Spectre. After getting revenge on those who had killed him, the Spectre was tasked on bringing vengeance to those who had committed evil acts. Although technically undead now, Jim Corrigan returned to the police department, and also started fighting crime as the DC Super Hero the Spectre. He was even a founding member of the Justice Society of America.

After World War II, The Spectre seemed to vanish from Jim Corrigan, who continued his work as a detective for the next two decades. During a séance, the Spectre was released from Corrigan’s body, where he admitted that he had been trapped inside of him by the demon Asmodus. Now free, the Spectre defeated Asmodus, and he and Corrigan formed a symbiotic relationship again, which they retained for several decades.

Eventually, Corrigan grew weary of the responsibility of being the host to the Spectre, and let his spirit pass away to Heaven, leaving the Spectre without a host. The rogue Angel Asmodel tried to bond with the Spectre, which caused Earth’s mystical defenders to beg Corrigan to resume his role. He refused, and chose to remain at peace, so the Spectre was bonded to the soul of Hal Jordan, the recently deceased Green Lantern of Earth. Jordan, who had committed great evil while under the influence of the Parallax entity, sought to transform the Spirit of Vengeance into the spirit of the Spirit of Redemption.

Eventually, Hal Jordan returned to life and to the role of Green Lantern, and he and the Spectre were separated for good. The Spectre then bonded with the soul of another murdered detective, this time Gotham P.D.’s Crispus Allen. In the altered reality of the New 52, the Spectre found yet another host, interestingly enough a police officer named Jim Corrigan. It is unknown if this Jim Corrigan is an alternate reality version of the ‘40s Corrigan, or somehow maybe his relative. 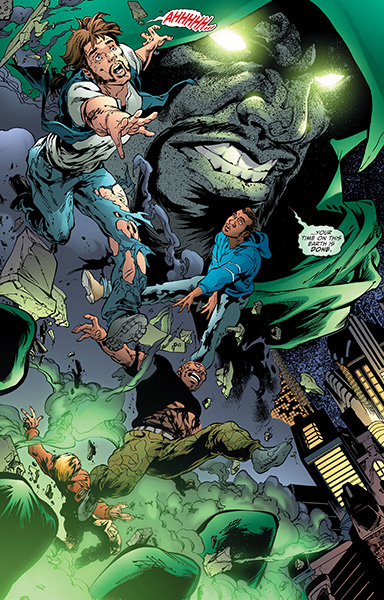 Simply put, the Spectre is arguably the most powerful Super Hero in the DC Universe. Essentially granted omnipotence by the Presence, another name for God, the Spectre can control time and space, control matter, not to mention exhibit mastery over “basic” super powers like energy manipulation, super strength, and flight. He can turn invisible, phase through solid objects, and has been known to grow to enormous size. He has vast mental powers which include creating hallucinations among his victims. He doesn’t seem to have any known weaknesses, although those who use magic and can wield it well could pose a threat to him, at least for a little while. He can also resist all forms of mind control. Only the being alternately known as “The Presence” or “The Voice” seems to have any true control over the Spectre’s abilities. 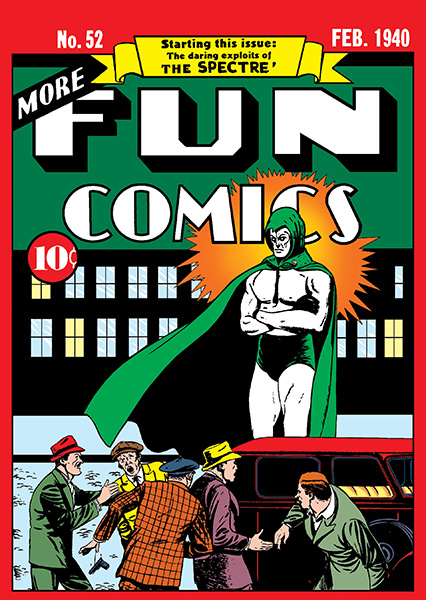 In the Spectre’s very first appearance, he is seen as a “mystery man” style hero, appearing as an angry, pale ghost clad in a green cloak. His first comic book appearance tells his origin story, how police detective Jim Corrigan ran afoul of the local mobster named Gat Benson, who ended up murdering him in a grisly fashion. As Corrigan cried for vengeance from beyond the grave, the mysterious “Voice” – now believed to be the Presence - bonded him to the Spectre. Jim Corrigan’s undead form was now home to a powerful entity, and the Spectre became one of Earth’s first Super Heroes, becoming a founding member of the Justice Society of America. 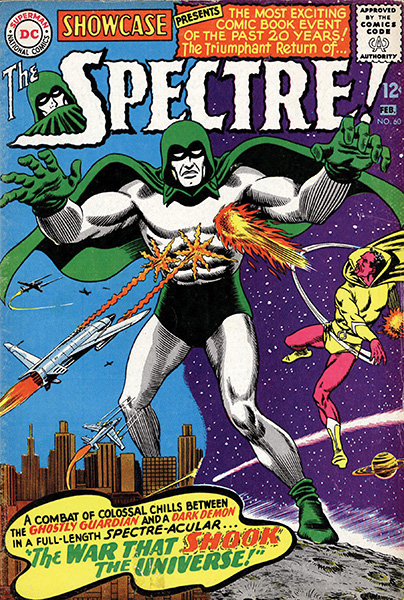 After serving with the Justice Society of America in the Second World War, the Spectre seemingly vanished, although the undead Jim Corrigan remained “alive” and continued to work as a New York City detective. Twenty years later, in the pages of SHOWCASE #60 in 1966, The Spectre returned, bonding once again with Corrigan. In this new incarnation, the Spectre was far more powerful, bordering on omnipotence. After several more appearances throughout the next few years, The Spectre finally received his own ongoing series, which lasted for ten issues. He then receded into the background of the DC Universe once again. But you can’t keep a good ghost down. 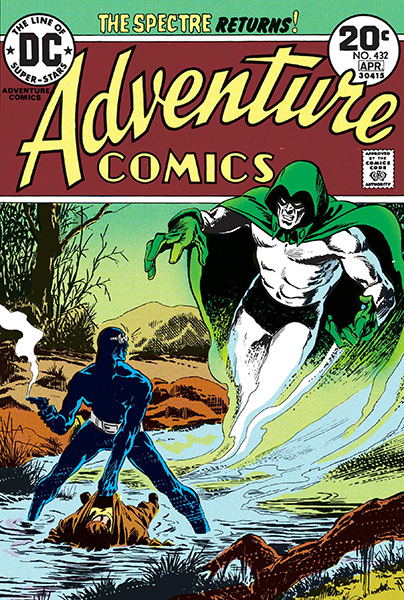 During the gritty 1970s, the Spectre returned again, this time in the pages of the long-running series Adventure Comics. In this latest incarnation of the character, the vengeance he took out on criminals was much more grotesque and harsh than it had ever been in the past, disturbing many longtime readers. Many of those stories were then shelved until the 1980s, when they were finished and released as THE WRATH OF THE SPECTRE limited series. 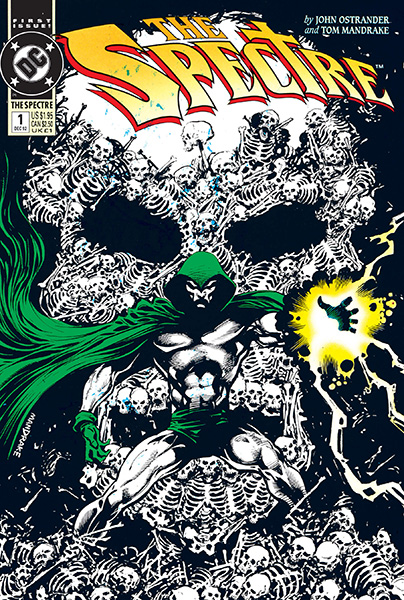 The Spectre, who by this point was nearly a God himself, was crucial in defeating the Anti-Monitor during the Crisis on Infinite Earths, by going back to the very dawn of time and preventing the creation of the Multiverse. After the Crisis, he received his longest running solo series starting in 1992, which ran for five years and 62 issues. In these new series of adventures, the Spectre’s role as the embodiment of the Wrath of God was more fully explored, as was the Spectre’s history going back to pre-Biblical times. We learn in this series that the Spectre was not the first embodiment of God’s anger, but the classic DC villain Eclipso was. 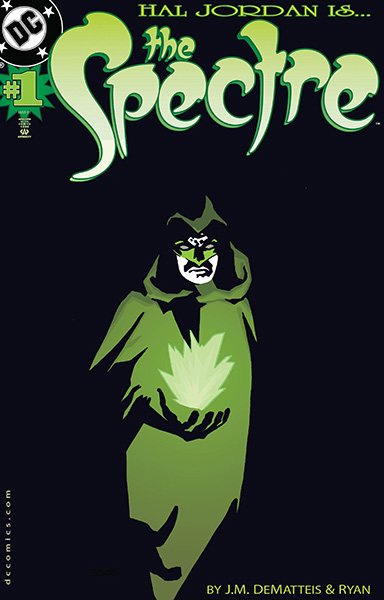 Eventually, Jim Corrigan grew tired of his extended life span on this plane, and decided to shuffle off this mortal coil and go to the afterlife. This caused his bond with the Spectre to be severed, and the Spirit of Vengeance to exist without a human host. At the same time, during the so-called Day of Judgment, the fallen Angel named Asmodel sought to add to his power by bonding with the Spectre. A group of magic users tried to persuade Jim Corrigan to return from the afterlife and become one with the Spectre again, but he refused, content with eternity.

This is when the soul of the recently departed former Green Lantern Hal Jordan, who sacrificed his life to save the Earth during the Final Night crisis, chose to bond with the Spectre. Hal now saw his role differently than previous hosts – he saw himself as a Spirit of Redemption, not Vengeance. After a brief time as the Spectre’s host, the spirit’s true purpose for bonding with Jordan become clear: he was to purge the last vestiges of the evil Parallax entity from his soul, allowing Jordan to return to life and to his role as the Green Lantern. But once again, the Spectre was left without a human host. 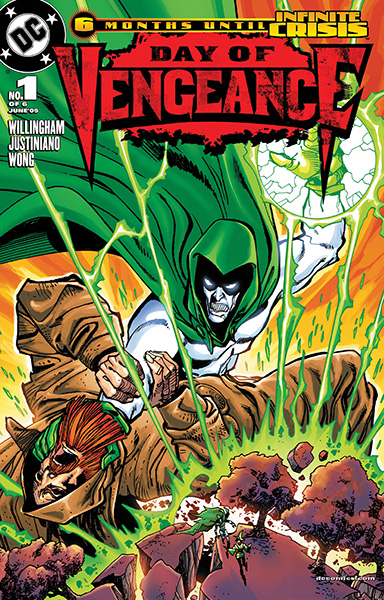 Without a human host once again, the Spectre becomes unhinged. He not only kills murderers, but he begins to kill people for much less serious crimes like stealing. Without a human host, he simply has no context for what punishment is fit for which crime. It is then that his old nemesis Eclipso seduces him into destroying all magic, as magic defies the laws of physics, which are God’s laws. Convinced of this course of action, the Spectre begins killing magic users of all kinds, coming into conflict with the community of mystical heroes on Earth.

When he kills the ancient Lord of Order named Nabu, the Presence intervenes, and once again bonds the Spectre to a human host, that of recently slain Gotham City police officer Crispus Allen. With his new host, the Spectre’s crusade against magic comes to an end, and the world has a new hero. The spirit of Crispus Allen remains as the host to the Spectre until the events of the Multiverse shattering Flashpoint event. 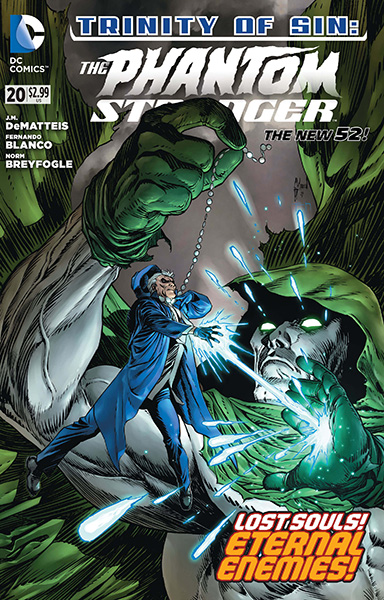 After the events of 2011's FLASHPOINT, the history of the DC Universe was reimagined, and it seems that the previous versions of the Spectre were erased from history. In what is known as the New 52 timeline, Jim Corrigan is now a modern day Gotham City Police Detective whose girlfriend is kidnapped. Corrigan is then guided by the ancient entity known as the Phantom Stranger on the instructions of “The Voice” to the abandoned warehouse where Jim's girlfriend is being kept. Sadly, this turns out to be a trap. Both Corrigan and his girlfriend are murdered by the kidnappers, and just as in previous realities, Corrigan’s cries for vengeance draw the attention of the Spectre.

Accusing the Phantom Stranger of betraying him, the Spectre is about to attack him, but the Presence intervenes, and sends the Spectre off to serve justice on those whom God thinks are more deserving of his swift and terrible vengeance. Jim Corrigan is forced to oblige. Corrigan eventually joins Gotham City’s task force on crimes with a supernatural bent to them. No one at the GCPD suspects that Jim Corrigan isn’t exactly alive anymore.