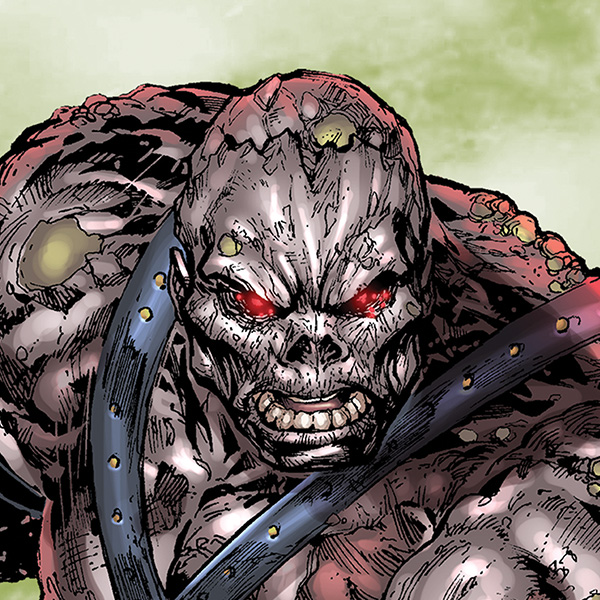 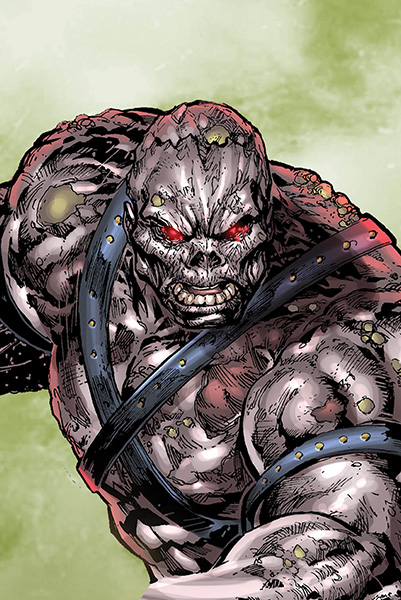 Cyrus Gold was murdered in Slaughter Swamp and transformed into the shambling, undead Solomon Grundy, cursed to endlessly resurrect time and time again.

Cyrus Gold was murdered in Slaughter Swamp and transformed into the shambling, undead Solomon Grundy, cursed to endlessly resurrect time and time again.

It started, bizarrely, with a nursery rhyme. Or rather, it started with a murder and a swamp and a resurrection. Either way, the story of Solomon Grundy is a strange and harrowing tale full of magic and mystery. Once a rich, corrupt merchant who was killed and left to rot in Slaughter Swamp, now a shambling, unstoppable undead monster, Grundy isn't so much a DC Super-Villain as he is a force of nature. Completely unaware of his past life, virtually immortal and imbued with the endless power that resides deep within the Swamp, Grundy doesn't want much in his un-life, but what he does, he usually gets.

Solomon Grundy, born on a Monday, christened on Tuesday, married on Wednesday, took ill on Thursday, grew worse on Friday, died on Saturday, buried on Sunday -- and that was not the end of Solomon Grundy. 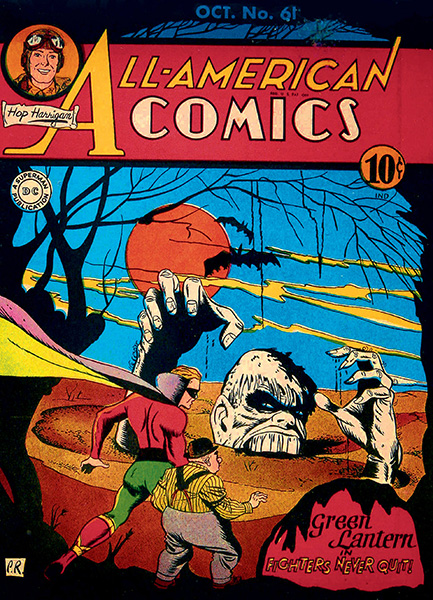 Not much is truly know about the earliest days of Solomon Grundy. Once a wealthy criminal merchant named Cyrus Gold who was killed and disposed of in Slaughter Swamp, Grundy immersed decades later as a shambling reanimated corpse imbued with the powers of the swamp's elemental magic.

With all his memories of his human life rotted away, Grundy constructed a new "identity" for himself upon hearing a band of unlucky travelers reciting the nursery rhyme which contained his new name. Without much in the way of wants or needs, Grundy fell into a life of crime almost accidentally, functioning more on pure instinct and what scattered impulses he retained from his past rather than any desire for material or social gain.

Later, it was revealed that Grundy had been cursed by Slaughter Swamp because he hadn't actually been murdered, but had taken his own life. But the validity of this story, much like everything to do with Grundy's past, remains murky at best. 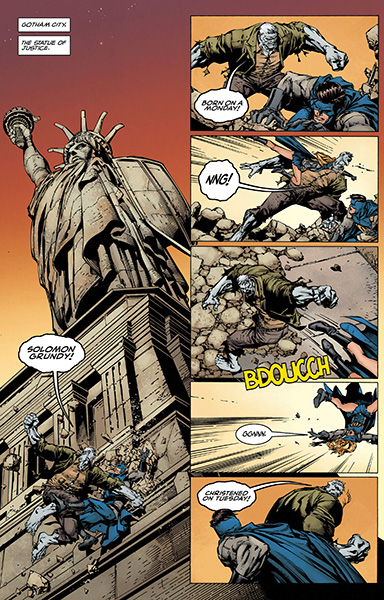 Undead and functionally immortal, Grundy is a virtually unstoppable force with enhanced strength, stamina, and endurance. He is invulnerable to nearly every form of physical attack, including forms of magic, and possesses a healing factor that allows him to regenerate through the damage he does sustain.

Resurrected versions of Grundy have been shown to have actual human intelligence, but these incarnations are typically more rare and his level of sentience is generally temporary.

For a brief time, Grundy was the avatar of "The Grey," an elemental force which connected him to Earth's energies and opposed the life giving "Green," a power wielded by Swamp Thing.

The Golden, Silver, and Bronze Ages 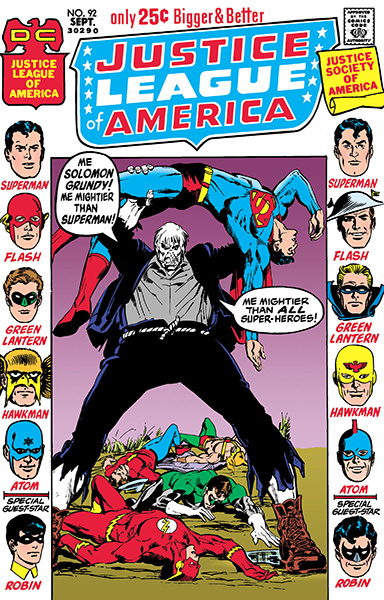 Grundy was introduced as a repeated adversary of the Golden Age Green Lantern, Alan Scott, who struggled against him thanks to his universal invulnerability which rendered the magic of Scott's Green Lantern ring all but useless.

As the DC Universe expanded through the '40s and '50s, Grundy became a foe for more heroes, including the roster of the Justice Society of America, which occasionally forced him through the multiverse and onto different versions of Earth. Grundy's healing factor and strength made him a difficult creature to keep contained for any amount of time. One of the favorite "prisons" for Grundy was actually the moon, where he would be deposited after a defeat before he inevitably found a way to return to Earth either under his own power or at the behest of someone else hoping to use him as a weapon.

Grundy's base instincts and traditional lack of free thought made him an easy target for manipulation and on-again-off-again ally of villainous cabals like the Injustice League. However, he was equally likely to switch sides if given proper motivation by any Super Hero. Jade, the daughter of Alan Scott, once saved Grundy's "life" when he became stranded on a glacier, causing him to become loyal to her for a time -- an ironic twist considering his historical grudge against her father.

During 2006's INFINITE CRISIS, Grundy was forced by Gorilla Grodd into joining the Secret Society of Super Villains, where he acted as the muscle of the team. Later, he gained temporary sentience and engineered a plot to draw Red Tornado's creator, Dr. Ivo, out into the open. Grundy, exhausted by his endless cycle of "resurrection" and un-death, believed Ivo could help build him a body that would actually live forever, rather than die and regenerate in an endless loop. His plan did not succeed.

During 2009's BLACKEST NIGHT event, Grundy's human form, Cyrus Gold, is resurrected in Slaughter Swamp by the death-raising powers of a Black Lantern ring. Gold, however, doesn't survive for long before he's shot and killed, transforming back into Grundy while in the morgue -- at least, temporarily. During the event, Grundy reverted back and forth between forms several times, with the promise that he will be free if he can solve the mystery of his own death. It was eventually revealed that Gold actually took his own life, however, and would be cursed to remain Grundy forever because of his selfishness. 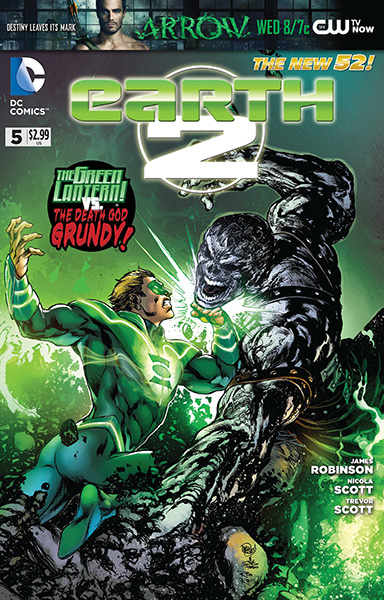 Following the continuity-altering events of 2011's FLASHPOINT, Grundy's story was given a slight change. Rather than gaining his undeath and immortality from the inherent magic of Slaughter Swamp, he was empowered by an elemental force known as The Grey, which opposed The Green, the force protected by the avatar Swamp Thing.

To defeat the forces of The Grey, Alan Scott was forced to exile Grundy to the Moon where his connection to the elemental energies of Earth would be severed.

Following 2016's DC UNIVERSE REBIRTH #1, Grundy was returned to his traditional role as an undead swamp creature. He could be seen amongst the Joker's forces during the "War of Jokes and Riddles" which tore through Gotham City shortly after the "Zero Year" event.