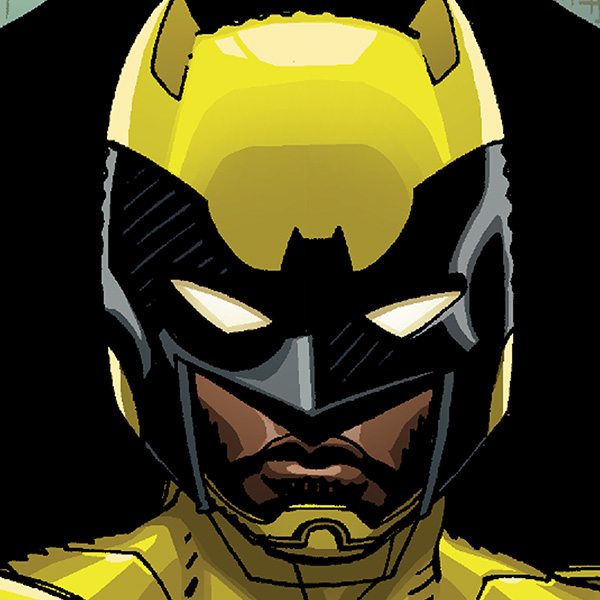 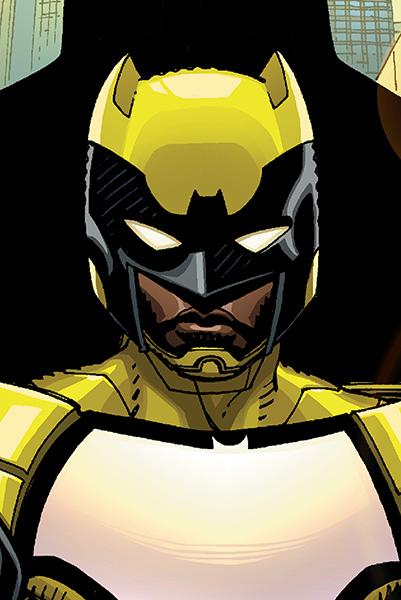 Duke Thomas is the daytime protector of Gotham City, and his metahuman light sensory powers make him unlike any of Batman's other crimefighting partners.

Duke Thomas is the daytime protector of Gotham City, and his metahuman light sensory powers make him unlike any of Batman's other crimefighting partners.

While Batman and most of his allies operate at night, crime in Gotham City is quite different in the daytime, and so requires a different kind of crime-fighter. That’s why the Dark Knight has recently taken a new protégé under his wing, training Duke Thomas—a.k.a. the Signal, the brightly colored agent of the Bat when the sun is out, and the Batman is asleep in his cave.

Duke Thomas grew up in a Gotham City that idolized the Batman, and he met his hero at a young age. When Batman vanished for a time, Duke took up with a youth movement inspired to become Robins in his absence. This “We Are Robin” group was short-lived, but Duke made an impression on Batman once the hero returned to Gotham City. He made Duke his latest partner, but promised him a different destiny than previous Robins.

Making good on his promise, Batman gave Duke a new costume and code name, and Duke became known as the Signal. Unlike most of Batman’s previous young partners, Duke has discovered he is a metahuman, with light-sensory powers in his eyes. Now he’s uniquely positioned to defend Gotham City in a way no other member of the Batman Family has. 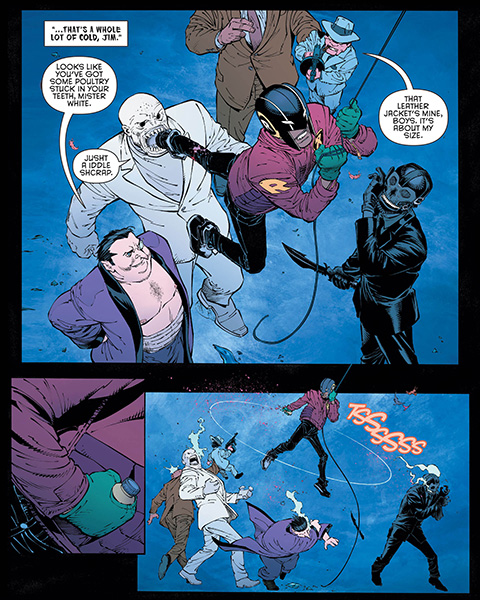 When the Riddler shut off all the power in Gotham City during the crisis known as the Zero Year, the criminal issued a challenge: citizens needed to start improving their brains, or die by natural selection. The Riddler promised that if anyone could ask him a riddle he couldn't answer, he would restore power to Gotham. A whip-smart young student named Duke Thomas began training his mind in order to take down the Riddler and save his city. When a hurricane pummeled Gotham, Duke’s family rescued an unconscious Bruce Wayne. Wayne remembered the young boy after he went on to save the city from the Riddler.

Many years later, Batman and The Joker had their ultimate battle, as the Clown Prince of Crime learned Batman’s true identity. The Joker then kidnapped Duke Thomas and his family and planned to re-create Bruce Wayne's parents' murders in front of him using the Thomas family. Although Batman rescued Duke from The Joker, Duke's parents fell victim to the mind-controlling gas The Joker had released. They disappeared.

Duke was placed in the foster system. Eventually, he learned The Joker’s toxins had been found in the Gotham City sewers, and he escaped from foster care to go down to the sewers to look for his missing parents. While down there, he found a group of Gotham City kids inspired by Batman and Robin to follow their example, during a time when Batman had gone missing. For a time, Duke was a member of this “We Are Robin.”

After Bruce Wayne returned, he offered Duke a position as his new protégé, an offer which Duke accepted under one condition—he didn’t want to be another Robin, as there had already been four, and he had already been part of a Robin movement. Instead, Batman gave him a bright yellow suit and began training him. He promised Duke he wouldn’t be another Robin, but instead would become something new.

After months of rigorous training, Batman revealed Duke’s name would be the Signal, after the Bat-Signal that lit the skies of Gotham at night. Duke’s role would be to protect Gotham City during the day, when Batman and his partners tended not to operate. During this time, Duke realized he was a metahuman, with superpowers related to his new role.

When he was younger, Duke showed considerable skill at fighting, a skill that was amplified when he joined the We Are Robin movement. He was trained by the four Robins: Dick Grayson, Jason Todd, Tim Drake and Damian Wayne. When he became Batman’s new protégé, the Batman taught him even more fighting techniques.

Unlike Batman’s previous young partners, Duke Thomas has recently discovered he is a metahuman. Duke’s superpowers allow him to take in light through his eyes and see things most people can’t see. His eyes absorb light much faster than normal humans, and he’s learned to manipulate the way his eyes process light. In addition, Duke can look back at the history of how light interacted with a specific place and see a few minutes of what happened before by seeing the afterimages of the light that hit the objects within that space.

Duke Thomas first appeared as a young child during the flashbacks to Batman’s New 52-era origin story, called “Zero Year.” A bright student, Duke strived to become smart enough to take down the Riddler, who had Gotham City under his control. At this time, young Duke and his family nursed an injured Bruce Wayne back to health. Wayne would go on to have a profound impact on Thomas’ life. 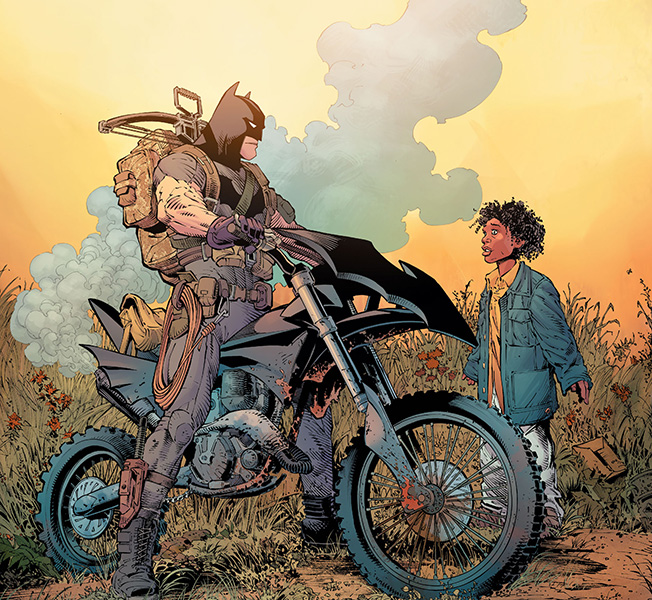 When The Joker finally learned the truth about who Batman really was, he tried to break Batman down to nothing. He kidnapped an innocent family, the Thomases, and planned to murder them in front of Bruce, re-creating Bruce’s own parents’ slaying. Batman was able to prevent The Joker from harming Duke, but the boy’s parents fell victim to the mind-controlling gas The Joker had released. They subsequently vanished. 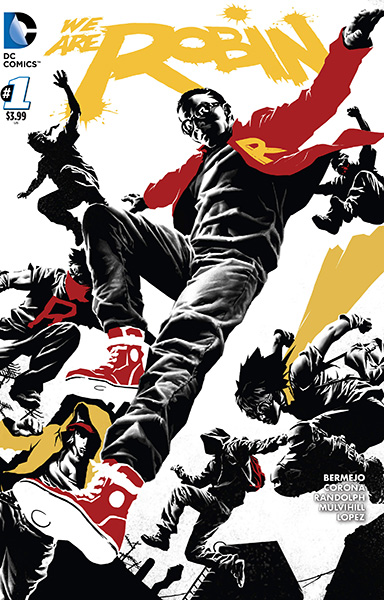 While searching for his missing parents, Duke joined a group of other youngsters fighting crime in Gotham City. Inspired by the legacy of Batman’s partners, they called themselves the Robins. This “We Are Robin” movement operated out of a place called the Nest. During a time when Bruce Wayne wasn’t able to be the Batman, they helped keep the peace in Gotham City. The Robins were even trained for a time by the actual Robins who had been Batman’s sidekicks.

After a time, one of the Robins was implicated in the shooting of a police officer and a thief in a local convenience store, and the We Are Robin movement found itself under intense scrutiny from the public. This led a member of the city council to enact “The Robin Laws,” which made it illegal for anyone in Gotham to wear Robin attire and allowed the police to detain anyone wearing the Robin insignia. This ended the We Are Robin movement.

After the dissipation of the We Are Robin movement, Batman realized Duke’s potential as a crime-fighter. He rigorously trained him and gave him a yellow and black costume, unlike those of the Robins in its design. He would not, however, give him a code name, making him wait until his training was complete.

During this time, Duke realized he had metahuman abilities and could see things other people could not. These abilities gave him an extra edge when it came to crime-fighting. Soon after this discovery, Batman gave Duke a code name—the Signal. It would be his job to represent Batman in Gotham City during the day, fighting the crime threatening Gotham when the sun is up and the night creatures are resting.