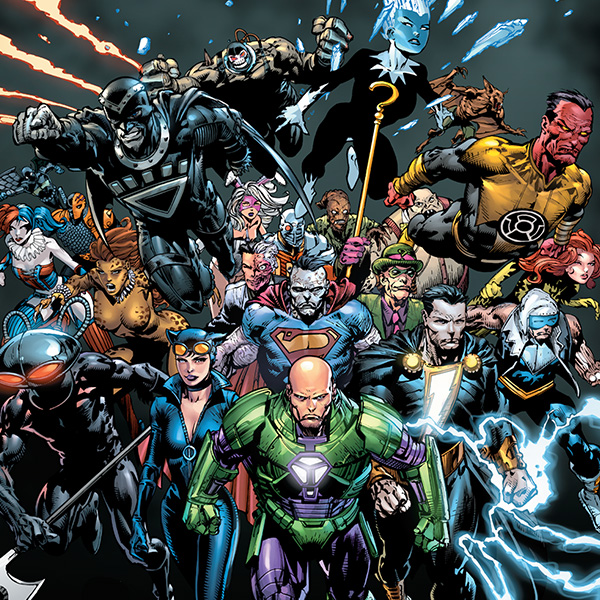 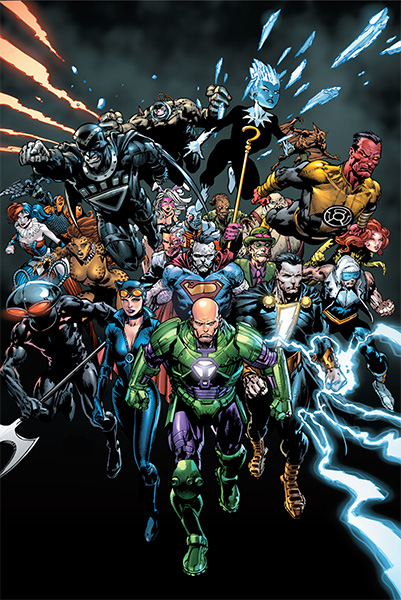 A collective of the world's deadliest super-villains, "The Society" will stop at nothing to conquer their enemies, the Justice League.

A collective of the world's deadliest super-villains, "The Society" will stop at nothing to conquer their enemies, the Justice League.

As soon as DC Super Heroes first arrived in the Golden Age of the 1940s, so too did DC Super-Villains. And just as heroes joined together to form groups like the Justice Society of America, their enemies also found strength in numbers by forming enclaves of their own, like the Injustice Society of the World, and later, the Injustice League. But these teams of high profile criminals were always soundly defeated by the good guys. So one day, they decided to form a clandestine society, one better equipped to defeat their adversaries once and for all. And thus, the Secret Society was born.

Originally gathered together by the intergalactic despot known as Darkseid as a way of eliminating the heroes of Earth, so it would be that much easier for him to conquer it, the Society eventually rebelled against their master, and struck out on their own. Almost every major villain in the DC Universe has been a part of the Society at one time or another over the years. The SSoSV has boasted well over a hundred members over the years, from legendary felons like Lex Luthor and Vandal Savage, to lower ranking hoodlums like Matter Master and Icicle. As long as the heroes of the DC Universe all stand together to help mankind, then the Society will continue to exist as their terrible counterpart.

Although there had been Injustice Societies and Injustice Leagues, it was the Lord of Apokolips who brought the original incarnation of the Secret Society together. Realizing that the heroes of Earth could possibly stop him in any planned invasion, he gathered eight villains together: Captain Boomerang, Captain Cold, Copperhead, Gorilla Grodd, Mirror Master, Shadow Thief, Sinestro and Star Sapphire. They eventually discovered they were being manipulated by Darkseid, and soon after, they struck out on their own.

Not long after they became an independent operation, the Golden Age villain known as the Wizard joined the group, and quickly took over as leader. Under his guidance, the team fought both the Justice League and the Justice Society, but ultimately dissolved. Another Secret Society was formed by the criminal genius called the Ultra-Humanite, but this roster also did not last long. All together, these early version of the Society boasted a membership of over some forty super criminals.

When the JLA reformed with of their most powerful line-ups ever, their villains followed suit. The Secret Society reformed with a roster of dozens of formidable criminals, many of which were members of the previous Society, along with several new recruits. This new iteration was brought together by the telepathic rogue known as Brainwave. Or at least that's what everyone thought. "Brainwave" was actually the Martian Manhunter in disguise, and his new Society was actually a way to trap as many of the League's enemies at once. 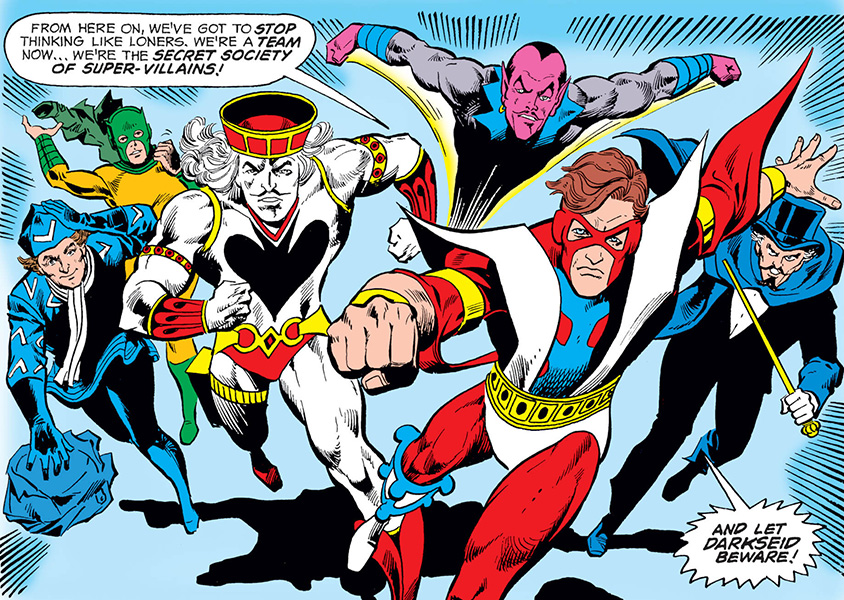 Another SSoSV was formed under false pretenses a few years later, when criminal mastermind Lex Luthor brought a new cadre of villains together. Only this wasn't the Lex Luthor everyone knew, but Alexander Luthor, from the parallel world of Earth-3, the only survivor of his entire universe, which was destroyed in the Crisis on Infinite Earths. He promised this new group of villains that he would make the JLA pay for the mind-wipes they did to several of their ilk years earlier, erasing their memories and, in some cases, altering their personalities. And most of the JLA's foes were more than eager to sign up to get revenge.

Alexander Luthor led many assaults against Earth's heroes during this time, in the months leading up to the cosmic even known as the Infinite Crisis. Despite their numbers swelling to include almost every major costumed criminal, Alex Luthor made the fatal mistake of not asking the Joker to join his Society, and the Clown Prince of Crime got his revenge for this slight, and murdered him. With Luthor gone, this iteration of the Society fell apart quickly, with many of the members either being captured or simply going back to being solo operatives. During this time, many of these same criminals also formed more public groups like the Injustice League or the Legion of Doom, although these are considered separate teams to the Society.

After Alexander Luthor's death, most of the world's Super-Villains were rounded up and sent to a distant planet by government agent Amanda Waller, as a way of permanently getting rid of the problem of super powerful criminals. However, once they made it back to Earth, these villains once again reformed as the Secret Society, under the leadership of the mastermind Libra, who promised this new version a chance for revenge for their exile. Libra's inner circle for this latest incarnation of the group was Lex Luthor, Vandal Savage, Talia al Ghul, Gorilla Grodd, Doctor Sivana, and the Ocean Master, making it truly their most deadly.

Libra, it was revealed, was an acolyte of Darkseid, so the one who formed the SSoSV in the first place all those years ago was actually behind this latest version as well, in a sense. Not wanting to be anyone's puppet, Lex Luthor took control of the team away from Libra, and actually helped Superman and the JLA defeat him during the so-called Final Crisis, a nearly Apocalyptic event engineered by Darkseid in his search for the Anti-Life Equation.

Following the history-altering events of 2011's FLASHPOINT, the Secret Society began when the mysterious villain known as the Outsider arrived on Earth, not long after Earth's heroes defeated Darkseid's invasion and formed the Justice League. About a year after the League came together, Outsider began contacting their enemies, and began to form a Secret Society of his own to counterbalance the League.

What no one knew was that the Outsider was the evil Earth-3 counterpart to Batman's butler, Alfred Pennyworth. This version of the Secret Society was by far the largest ever, with over 100 members. It was the Outsider's plan to have the Society act as an extension of the Crime Syndicate from Earth-3, villainous version of the Justice League from his home dimension, once they arrived on the Prime Earth. Although many served the Syndicate, many also rebelled against them, and became unlikely heroes. When the Justice League managed to defeat the Syndicate, the SSoSV once again collapsed. But you can't keep a bad idea down, and a new, smaller version currently exists, under the leadership of Vandal Savage. 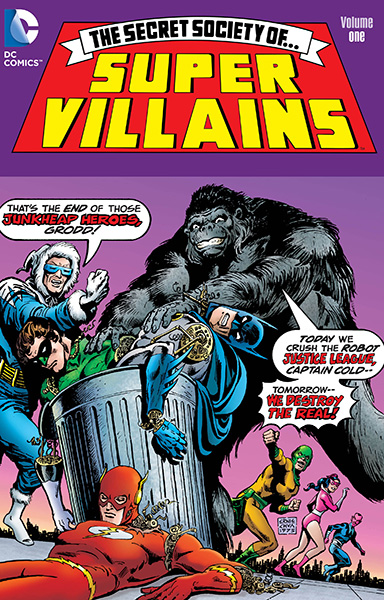 Various costumed villains are brought together by special invitation to a strange location called the Sinister Citadel, and are invited to become members of the brand new Secret Society of Super-Villains. As soon as they are introduced to each other, the Justice League attacks them, but they discover they were actually lifelike robots. Although initially brought together by an evil clone of the hero called Manhunter, in truth, he was working for none other than Darkseid himself.

When the criminal mastermind known as Brainwave invites dozens of the world's deadliest villains to join his new Secret Society, most of the most famous names in villainy show up for their chance to join up, and create a force to defeat the newly re-formed JLA. But "Brainwave" turned out to be the Martian Manhunter in disguise, and used the invitation for a new Society as a way of rounding up all the League's enemies. 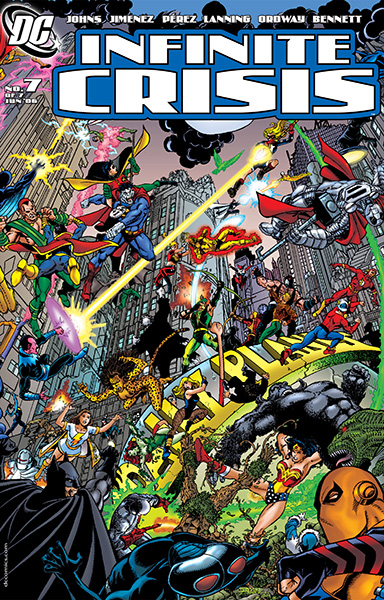 In the lead up to the event known as 2005's INFINITE CRISIS, the Alexander Luthor of the original Earth-3 formed a new Secret Society of Super-Villains for his own ends. He told the membership they were being brought together for revenge against the JLA, but in truth they were part of his ulterior motive to bring back the original Multiverse. His plan nearly worked, but when he didn't invite the Joker to join up, the maniacal clown got his revenge and killed Alex Luthor in cold blood, for not inviting him to "play along." 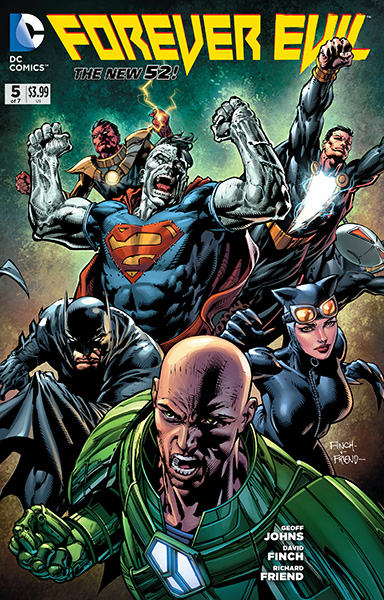 Following the history-altering events of 2011's FLASHPOINT, the Secret Society was formed by a mysterious man in a bowler hate named "Outsider", during the events of 2013's FOREVER EVIL. He gathered as many of the League's most dangerous enemies over a period of several years, and finally unleashed their full might on Earth's heroes, during a time when the League was banished to another dimension. It was revealed that he was an alternate version of Alfred Pennyworth, Bruce Wayne's loyal butler, and he was preparing the Earth for the Crime Syndicate from his world to take ours as their own.