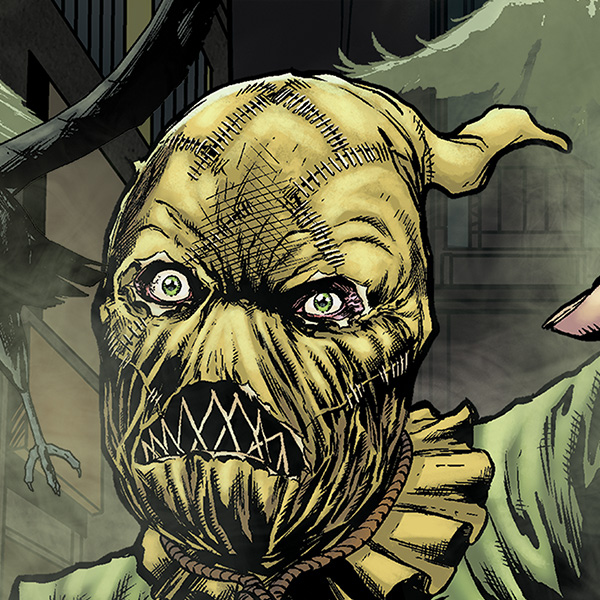 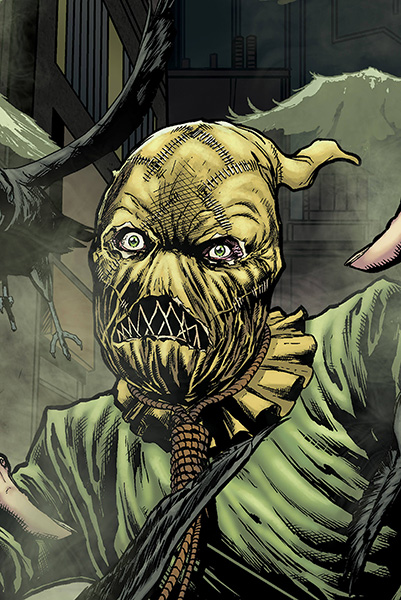 In another life, Jonathan Crane may have been a promising psychologist, but his obsession with fear drove him from medicine into costumed crime.

In another life, Jonathan Crane may have been a promising psychologist, but his obsession with fear drove him from medicine into costumed crime.

Few have mastered the human brain as thoroughly, or maliciously, as Dr. Jonathan Crane, a.k.a. the Scarecrow. A brilliant though troubled psychologist, Crane dedicated his life to understanding exactly how the emotion of fear works in the body and mind.

Once a doctor at Arkham Asylum, Crane's obsession with fear led him to conduct unethical experiments on inmates, creating his own chemicals and drugs to cause mass hallucinations and panics, all in the name of his research. It wasn't long before he ended up on the other side of the straitjacket, after he crafted himself a costume and alter ego and terrorized Gotham City at large as the Scarecrow.

The Scarecrow is one of Batman's most dangerous enemies. After all, how do you inspire terror in the heart of a man who has mastered fear itself?

Jonathan Crane's father was a failed psychologist who was obsessed with fear. A cruel and abusive man, broken by the loss of his wife, his father subjected Crane to countless psychological experiments, searching for a way to overcome and master the ability to feel fear. These experiments often involved locking poor young Jonathan alone in the dark in the basement of their house, despite Jonathan screaming and crying to be let out, and testing his psychoactive chemicals on his son.

At school, Jonathan was bullied and tormented by his fellow students for his gaunt appearance and social awkwardness, resulting in an overwhelming sense of isolation throughout his childhood. On one occasion when Jonathan was locked in the basement, his father had a heart attack and died, forcing Jonathan to breathe the fear gas his father had pumped in until the police finally arrived. Jonathan was rescued, but severely traumatized. 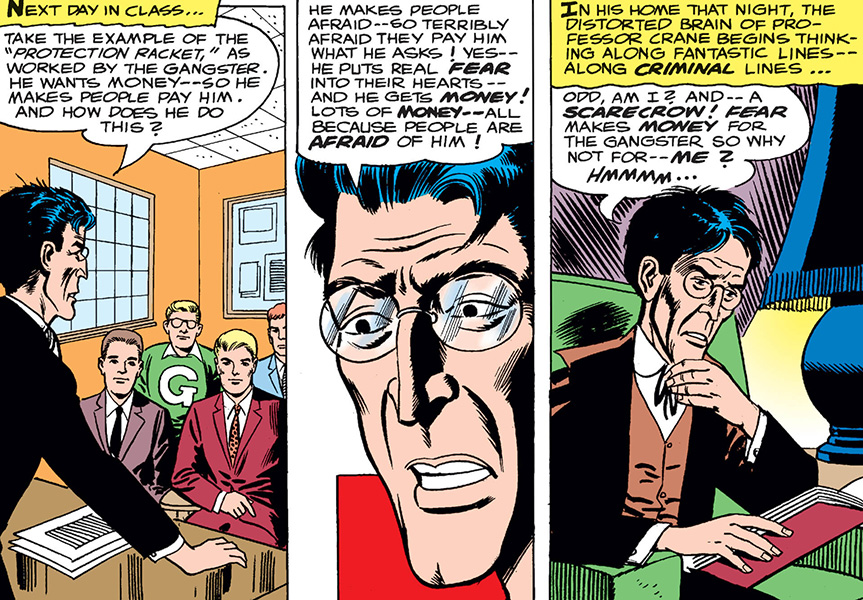 Jonathan grew up to become a professor of psychology at Gotham University, but was fired for his unorthodox methods, which involved abusing students with his own experiments in fear. Later, he attempted to become a practicing psychologist, but he flew into a rage when one of his patients refused to see the value of overcoming their fears; Jonathan murdered them. From that point onward, he dedicated himself to using the most extreme methods imaginable—pursuing his obsessions as the Scarecrow. 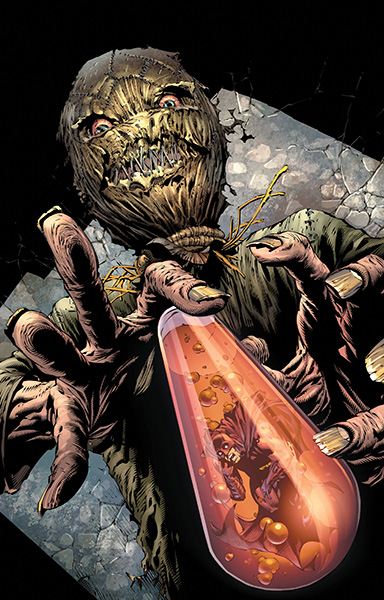 Though he is a human with no powers or abilities, Jonathan Crane has a remarkable intellect and an almost limitless supply of fear toxin, a hallucinogenic chemical of his own design that prompts panic in the human brain by exposing its subjects to their darkest nightmares. Crane himself is largely immune to the drug's effects, though from time to time he has inadvertently exposed himself to it and suffered psychoactive consequences.

In addition to his fear toxin, Crane's background in psychology makes him a master manipulator and criminal mastermind, though largely in service to his "research," rather than any material gain. 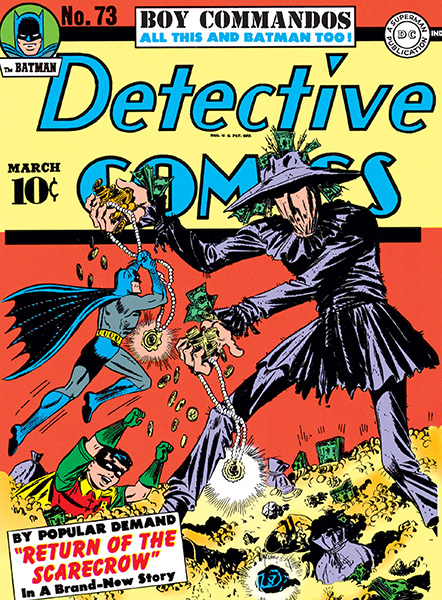 In his first appearance, in 1941's WORLD’S FINEST COMICS #3, Jonathan Crane was introduced as a lanky, bookish, introverted university professor who, as a child, had enjoyed frightening birds, and was labeled a "scarecrow" by his faculty colleagues. His lessons in the psychology of fear saw him firing a gun in the lecture hall, terrifying his students and resulting in his dismissal.

With no income, Crane dressed as “a symbol of poverty and fear combined! The perfect symbol—the scarecrow!” He entered the criminal racketeering business, but was thwarted by Batman and Robin. At this point in his career, the Scarecrow's principal weapons were smoke bombs. He appeared only once more in the Golden Age of comics.

The Silver and Bronze Ages

The Scarecrow resurfaced late in the Silver Age of comics, in 1967’s BATMAN #189. Here he first wielded his fear toxin to instill and amplify phobias in the minds of his victims. The Scarecrow reappeared often throughout the 1970s, joining other DC Super-Villains in the Injustice Gang. In 1983’s THE BRAVE AND THE BOLD #197, the Batman and Catwoman of Earth-Two united to defeat him, and, in so doing, realized their love for one another, which led them to marry. 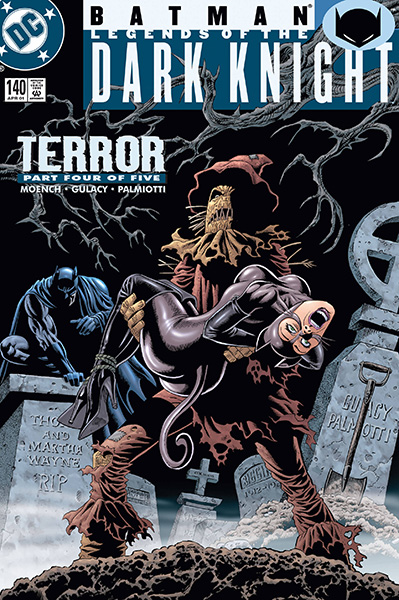 In 1995's BATMAN ANNUAL #19, the Scarecrow's backstory was revised and expanded. Tormented and mocked throughout his teenage years, Jonathan Crane decided to terrify his bullies. This led him to construct a makeshift version of his Scarecrow costume and force two of his peers into a car accident by frightening them as they tried to leave their high school prom. Neither survived the incident and Crane got his first taste of the power fear has over the human body.

Crane was never charged in the accident and continued feeding his obsession, studying psychology and eventually becoming a professor at Gotham University. He was fired, however, after firing a loaded gun in class to demonstrate terror in real time. Rather than find a new job, Crane murdered the professor responsible for reporting him, and then devoted himself full-time to his criminal pursuits.

Throughout his history, Crane has forged a number of alliances with other criminals. One of his earliest partnerships was with Hugo Strange, as detailed in the 2003 storyline "Terror," which retroactively told the story of Crane as he was beginning to get a foothold in the city's underground. Strange attempted to manipulate Crane into helping him unmask Batman, but the scheme failed due to their egos and mistrust of one another.

It was later revealed that Crane had played a major role in the evolution of Bruce Wayne's childhood friend Tommy Elliot into the super-villain Hush. Elliot, it turned out, had come to Crane for treatment shortly after the deaths of his parents, but, rather than providing genuine aid, Crane had used the opportunity to encourage Elliot down a darker path. The two reunited to enact Elliot's master plan in the 2002 storyline "Hush."

Crane partnered with the Penguin in the 2004 storyline "As the Crow Flies," but he was betrayed by the wicked waterfowl. Penguin doused Crane with a mutagenic chemical, transforming him into a hulking creature known as the "Scarebeast," which possessed enhanced strength and the ability to emit fear toxin gas. The transformation was not permanent, however, and Crane reverted back to his human form following his defeat by Batman.

In 2009's "Blackest Night" storyline, Crane was temporarily deputized as a Yellow Lantern of Earth, but lost his ring, and subsequently his powers, when the deputized Orange Lantern Lex Luthor stole it from him. 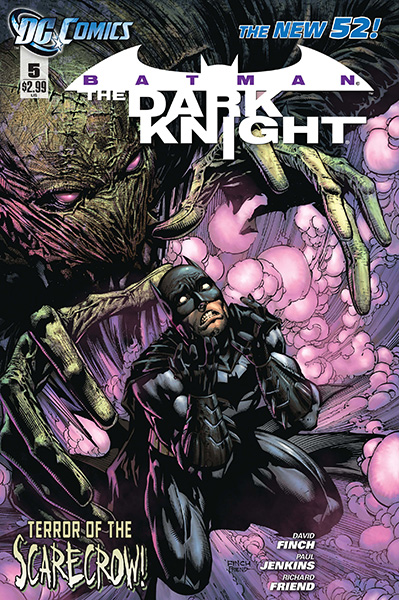 In the New 52 era, following the events of 2011's Flashpoint event, Jonathan Crane's origin story was reimagined in 2012's "Cycle of Violence." This storyline explained how he was the son of a disgraced doctor who was obsessed with fear and terror. Crane's father would often experiment on him, subjecting him to hallucinogenic chemicals and periods of isolation that led Crane to develop severe trauma. One night, when Crane had been locked in isolation, his father had a heart attack and died, leaving Crane alone until the police recovered him days later.

In his adult life, Crane devoted himself to "perfecting" his father's experiments and chemicals, seeking to inflict the same pain on others that was inflicted on him. To that end, he abducted children and subjected them to the same torture his father would inflict on him. Thankfully, he was defeated by the Batman.