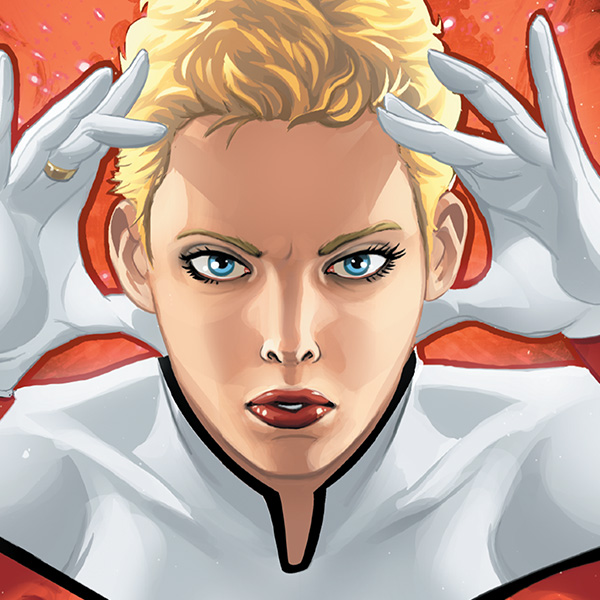 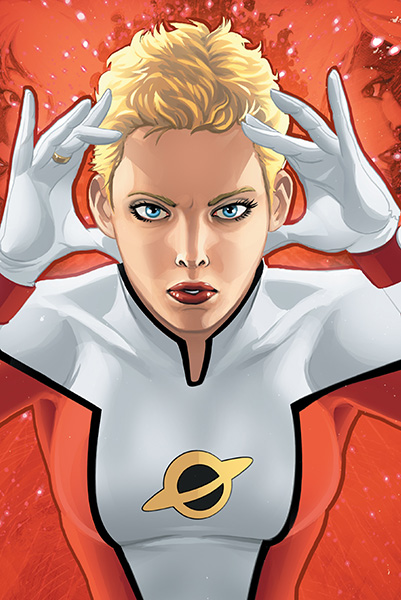 The telepathic Titan known as Saturn Girl is one of the founding members of the Legion of Super-Heroes.

The telepathic Titan known as Saturn Girl is one of the founding members of the Legion of Super-Heroes.

One of the three founding members of the Legion of Super-Heroes, young Imra Ardeen hails from the planet Titan, one of the moons of Saturn, and was one of her homeworld's most powerful telepathic minds. Imra left Titan at a young age to join the Science Police, but on the way to Earth she and two other super-powered teens were able to prevent an assassination attempt on fellow starship passenger and billionaire, R.J. Brande. After saving Brande's life, he asked Imra and the other two teens -- Garth Ranzz and Rokk Krinn -- to form a team which he would fund. Thus the Legion of Super-Heroes was born, with Imra adopting the codename Saturn Girl.

During her time with the Legion, Imra would begin a long relationship with fellow founder Garth Ranzz, a.k.a. Lightning Lad. She was instrumental in reviving Garth when he was presumed dead, and the pair would eventually marry. Imra gave birth to twins, Graym and Garridan, and later the telepathic sisters Dacey and Dorrit.

Although she eventually left active duty with the Legion, Saturn Girl is always available to lend a hand to the team in times of great upheaval. 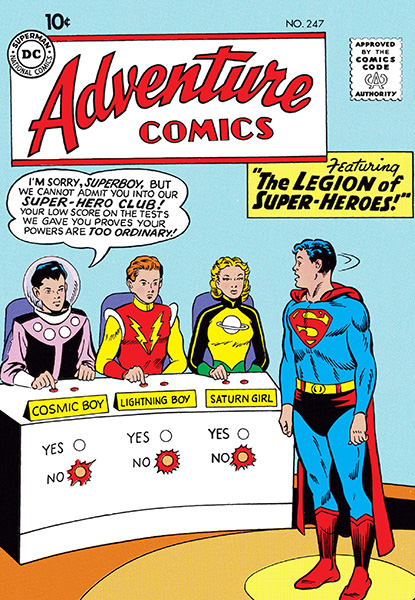 Born among a race of telepaths on the planet of Titan, one of Saturn's moons, Imra Ardeen was always a prodigy, even among her own people. Deciding to use her abilities for good, she applied for membership in the Science Police. However, on a passenger ship to Earth, she used her incredible powers to read the minds of a group of terrorists secretly on board who were planning to assassinate billionaire RJ Brande, who was also on their flight. She thwarted the attempt, along with two other teens -- Rokk Krinn of the planet Braal, and Garth Ranzz of the planet Winath. After saving Brande's life, the eccentric mogul asked the trio to form a Super-Hero team he would fund, and Imra became the Legion of Super-Heroes' Saturn Girl.

She would soon fall in love with fellow Legionnaire Lightning Lad, and the two would begin a very long courtship. When Lightning Lad died, Saturn Girl went to great lengths to bring her boyfriend back to life, creating an elaborate scheme in which she would sacrifice her own life to bring him back. Luckily, the creature called Proty died in her place, allowing Saturn Girl and Lightning Lad to pick up right where they left off. Eventually, after many adventures together with the Legion, Imra and Garth were married, and Legion bylaws were changed so that a married couple was allowed to remain on the team.

During a brief time in which the couple were on sabbatical from the Legion, Imra gave birth to twins, Graym and Garridan. But Garridan was kidnapped and taken back in time by the Lord of Apokolips Darkseid, where he was transformed into the deadly Legion villain Validus, member of the Fatal Five. He was later returned to normal when Imra begged Darkseid to return him to his true form. Imra came back as a full-time Legionnaire in 2987 when the villainous Universo enslaved the Earth, and it was Saturn Girl's mental powers which were key in liberating the planet. She became a full-time member of the Legion again, while her husband Lightning Lad stayed home on Winath as a full-time dad. Saturn Girl eventually retired again, and began running a plantation, which became very successful. She gave birth to twin girls, Dacey and Dorrit. During emergencies, she would continue to aid the Legion.

After the events of ZERO HOUR, a new version of a young Imra Ardeen was introduced. This version of the telepathic teen was actually a Science Police interrogator, and when she helped save RJ Brande under similar circumstances as in her previous incarnation, she was asked to join the Legion of Super-Heroes, which in this reality was a government-sponsored diplomatic peacekeeping force. Unlike before, this Imra was part of a love triangle with her fellow Legion co-founders, Cosmic Boy and Lightning Lad. This version of Saturn Girl and her Legion were later revealed to be part of the parallel Earth-247.

Another Saturn Girl appeared on yet another parallel Earth, Earth Prime. This version of Imra Ardeen was actually mute, as her race of Titanians were so advanced in their mental abilities they did not speak vocally. To talk to her teammates, she always used telepathic communication. Earth Prime's Imra has a hard time opening up to fellow members of the team, except for her beloved Lightning Lad.

After the events of INFINITE CRISIS, it was revealed that the original Legion still existed in the Multiverse. Imra was a member once more, and helped Superman when he traveled to the future to reunite with his childhood friends when the xenophobic Earth-Man threatened the planet. During the epic known as FINAL CRISIS: LEGION OF 3 WORLDS, it was Imra's telepathy which united three different Legions from across the Multiverse to join in battle against the monstrous villain the Time Trapper. She has appeared recently in the post-REBIRTH reality as a patient in Arkham Asylum in the 21st Century. 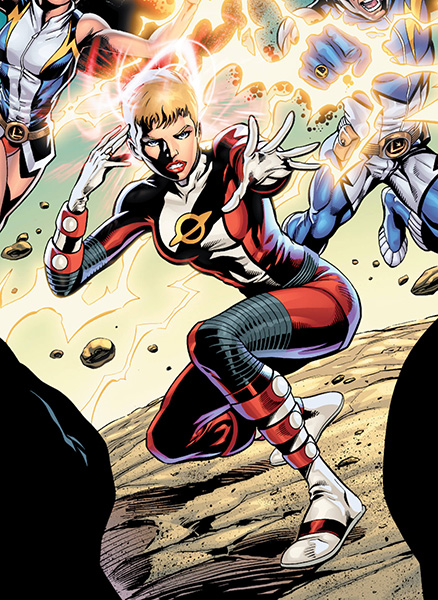 Saturn Girl is a telepathic prodigy, seen as exceptional even among her race of telepathic beings who reside on Titan. Saturn Girl has an in depth knowledge of the humanoid brain and each of its specific functions. She has the power to read the minds of others and sometimes can pick up stray thoughts accidentally as her mind is so powerful.

She can place thoughts in the minds of others, and create a so-called "Telepathic Cloak," which she can use to mask herself from her enemies, including other telepaths. Her powers of mind control are extensive, and she has a psionic blast, as well as the power to create illusions. Some of the limitations on her powers might actually be self-imposed. One of her teachers, Dr. Aven, placed psychic blocks on her mind to limit her vast ability. As a member of the Legion, she has access to a Legion flight ring which allows her to fly.

In the Legion's first-ever appearance, Saturn Girl, along with her fellow Legion founders Cosmic Boy and Lightning Lad, go back in time to 20th Century Smallville, to recruit their inspiration, Superboy. Although they at first trick him into thinking he did not make the cut, they reveal by the end of this story that it was all a test, and Superboy made it in after all.

In this story, Saturn Girl is elected Legion leader, and quickly proves to be cruel and strict. She grounds members of the team and uses a device to steal their powers. It all turns out to be a scheme to sacrifice herself in her teammate's place, when she learned that Zaryan the Conqueror was predicted to kill a member of the Legion. But Lightning Lad learns the truth, and sacrifices himself in her place.

"The Millennium Massacre" (ALL-NEW COLLECTOR'S EDITION SUPERBOY AND THE LEGION OF SUPER-HEROES #55, 1978) 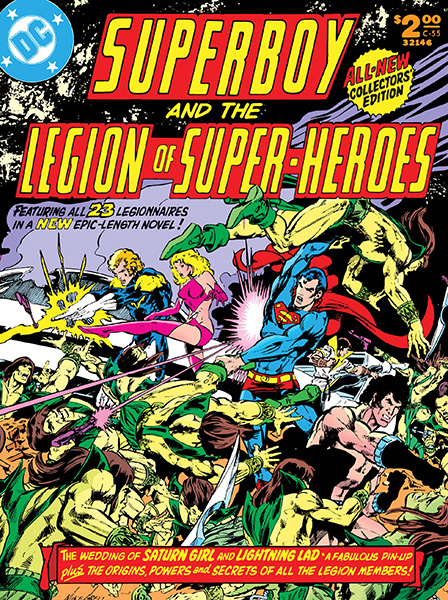 Saturn Girl and Lightning Lad become the first Legion members to get married in this special oversized issue. Superboy arrives in the future to celebrate the nuptials, only to find the future altered, thanks to the machinations of the Time Trapper. Once he is defeated, Saturn Girl and Lightning Lad leave the team, although their absence from the team was relatively brief. 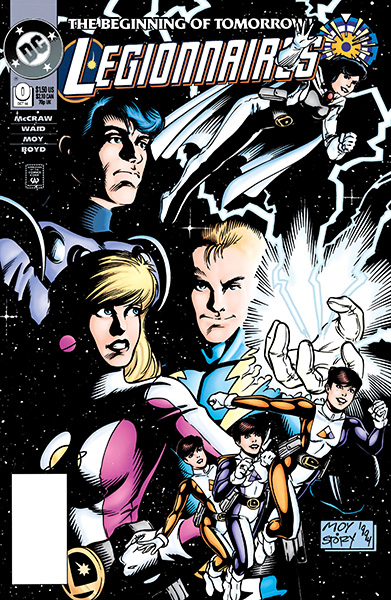 In the post-ZERO HOUR reality, Imra Ardeen is reintroduced as an an accomplished Science Police interrogator, who saves the life of billionaire RJ Brande, leading him to recruit her to become a founding member of his new project, the Legion of Super-Heroes. Although she was unsure of this new Legion at first, she quickly became a valuable member.

A woman with telepathic powers who seems to be Imra Ardeen appears in the 21st Century as an inmate of Arkham Asylum, where her powers have made her seem mentally unstable to the locals. How she arrived in the past, and her true intentions there are a mystery that remains to be solved.