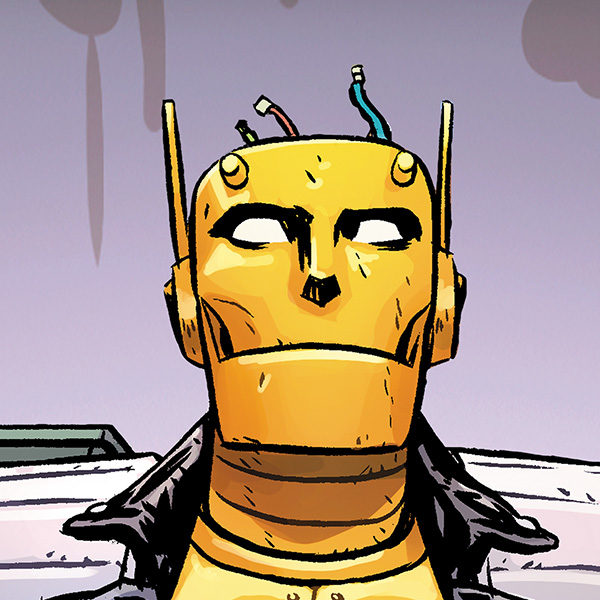 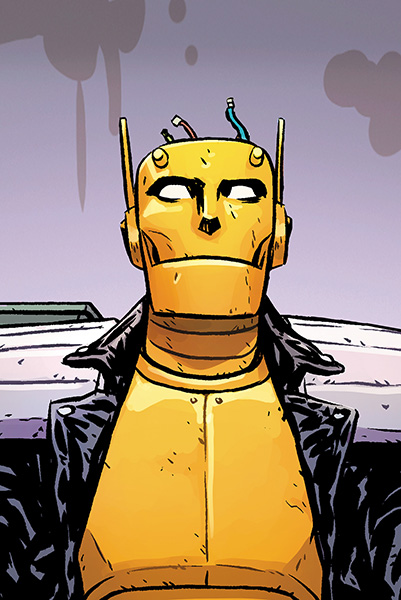 Cliff Steele was a racecar driver until a tragic accident nearly killed him. His brain survived, but only after it was transplanted into a mechanical body.

Cliff Steele was a racecar driver until a tragic accident nearly killed him. His brain survived, but only after it was transplanted into a mechanical body.

A bold risk taker all of his life, Cliff Steele's body was destroyed in a terrible accident, and when his brain was transplanted into a robotic form, he reluctantly became the Super-Hero Robotman. In his new heroic persona, Cliff became a founding member, and sometimes leader, of the team of super powered freaks and outcasts known as the Doom Patrol. Although there have been many incarnations of the team over the years, Robotman has always been at the heart of the group, since the very beginning.

Although appearing to most people as a gruff, working class guy trapped in an orange, metallic body, Cliff is actually a big softie underneath it all. He has always viewed his fellow teammates in the Doom Patrol as his family, and due to his nearly indestructible nature, has often found himself as the sole survivor of different versions of the team, carrying the weight of their loss with him for all time. Despite not really knowing if he is the "real" Cliff Steele, or merely a copy trapped inside a robotic body, Robotman continues to help those in need, always stoically carrying the weight of his tremendous losses with him. 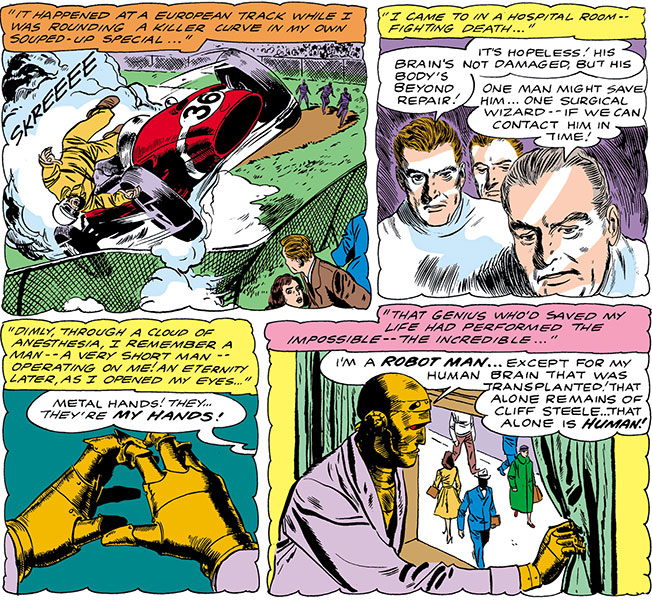 Cliff Steele was a man who lived life on the edge, and enjoyed putting himself in various dangerous situations just for the thrill of it all. He participated in extreme sports, and travelled to dangerous places across the globe. Eventually, Cliff became involved in the NASCAR circuit. Now a professional racecar driver, he ended up racing in the Indianapolis 500. This race would prove to be fatal for Cliff, and the day his luck would finally run out. During the race, his car slid across an oil slick, toppling over. The car exploded, completely destroying Cliff's body. However, his brain remained intact.

It was then that a brilliant and eccentric scientist named Niles Caulder, nicknamed “The Chief,” managed to save Cliff's brain, and he implanted it in an advanced robot body of his own creation. One of the cybernetic contacts to his brain comes loose however, which resulted in Cliff malfunctioning and going on a deadly rampage. Dr. Caulder is able to repair him, and once calm, he explains his new situation to him. Now dubbed "Robotman," and in a super strong and nearly indestructible body, Dr. Caulder introduces Cliff to other freaks he has recruited, and together they form the crime fighting team called the Doom Patrol.

Robotman's original mechanical body, created by Dr. Niles Caulder, possessed extraordinary strength, speed, and endurance, far greater than those of a normal man. Cliff Steele's body is now composed of multiple layers of a unique flexible ceramic metal. Among the many features of his robot body are electromagnetic feet which allow him to scale metal walls, heating coils in his hands that allow him to melt almost any metal he touches, and an oxygen tank that could sustain his brain in the case of an emergency. He also had a video communication device strapped to his chest that allowed Dr. Caulder to keep in constant contact with the Doom Patrol while they were on a mission.

Later bodies which have been created for Robotman, mostly by Dr. Will Magnus, have featured several other upgrades, including new tools and weapons. Cliff Steele was an expert hand to hand fighter in his human life, and that knowledge is retained as Robotman. In the post-FLASHPOINT reality, Cliff was turned into Robotman using nanobots, and he has a certain amount of mental control over these nanobots, which he can influence to perform different tasks for him. 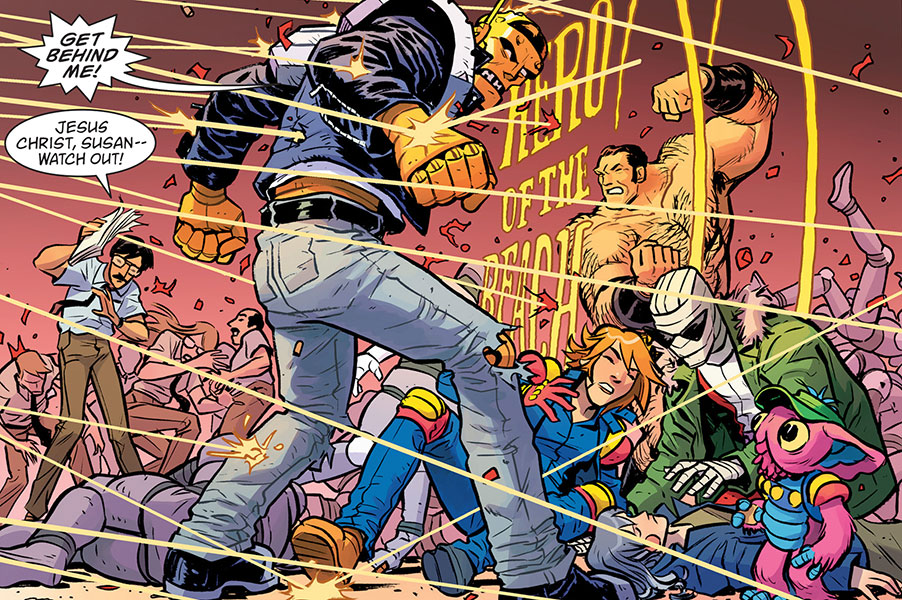 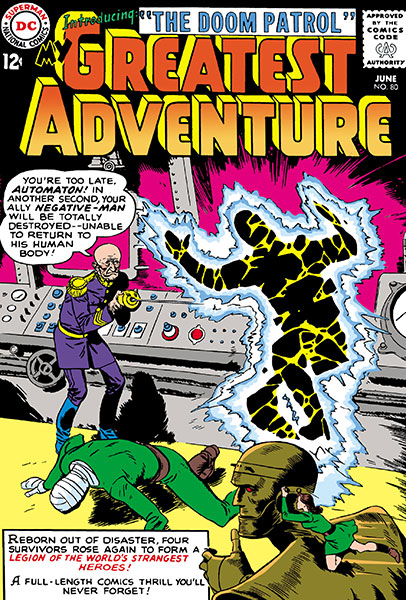 In an era when Super-Heroes always saved the day and walked away from a battle, the Doom Patrol sacrificing their lives to save a small town full of strangers was unprecedented. In this story, the Doom Patrol's enemies Madame Rouge and Captain Zahl force the team choose between saving their own lives or those of the tiny town of Codsville, Maine. Without a second thought, the heroes offer their lives in exchange for that of the townsfolk, and sacrifice their lives to save innocents. Robotman's "death" in this issue would remain for nearly a decade.

After being declared dead for years, Robotman returns, and is seemingly the only original member of the team to make it out alive. In an all-new robot body, Cliff goes back to his teammates' old headquarters, where he discovers a new team of super powered heroes going by the name Doom Patrol, including Celsius, Tempest, and Negative Woman. After briefly fighting them, feeling they had not earned a right to that name, he ends up joining their ranks after the original team's old foe General Immortus returns. 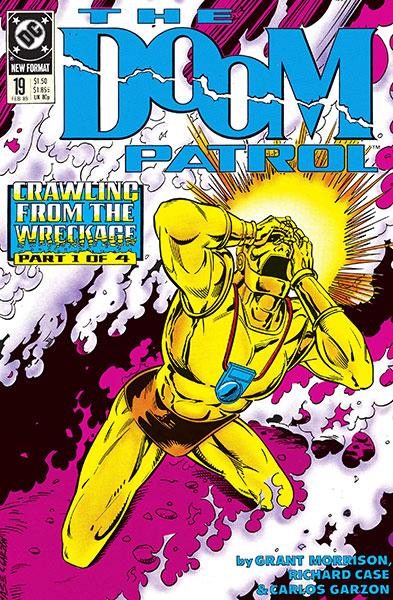 After being one of the only survivors of the Doom Patrol for a second time, Cliff accepts joining a new iteration of the team when asked by the Chief, a.k.a. Dr. Niles Caulder, the team's original founder. This strange new version of the group are pitted against the Scissormen, who are part of a volatile "philosophical location" that has escaped into our reality and threaten to destroy it. Realizing there are threats out there simply too bizarre for the likes of Superman and Batman to know how to handle, Robotman dedicates his life to the strangest version yet of the Doom Patrol, one which ultimately resides on a living street named Danny, who serves as both team member and team headquarters.

After several years having bizarre adventures with Crazy Jane and other members of the more surrealist version of the Doom Patrol, Robotman resurfaced, having sold the name and copyright of the Doom Patrol to the billionaire Thayer Jost, CEO of the Jost Corporation, which was looking to start their own corporately sponsored super team. As it turned out though, the Robotman who was a member of this version of the team wasn't the real thing, but a copy. The real Cliff Steele eventually turned up, and replaced his doppelganger on the team, which ultimately ended up being short-lived. 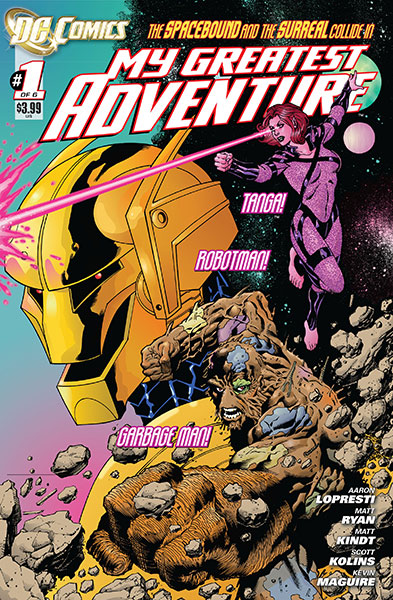 In the post Flashpoint DC Universe, we get the altered origin story of Robotman, which does not initially involve the Doom Patrol. In this new origin tale, we see how Cliff Steele was approached the scientific cooperative called U.N.R.E.A.S.O.N. to be injected with nanobots, which could repair his body when gravely injured. After a horrible accident, the nanobots kick in and transform Cliff into Robotman.

Some time later, a mysterious woman asked Cliff to find her husband, a man named Dr. Turing. He eventually found out that Dr. Turing was responsible for the accident that resulted into his transformation (which he would later find out also involved Dr. Niles Caulder.) When Cliff tries to kill the doctor, his Nano-bots won't allow him to murder. He returns to the Las Vegas area, and sets up shop as a private investigator. 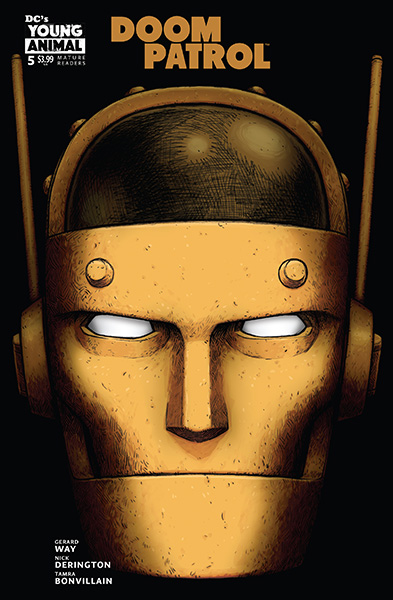 Following the events of DC Universe Rebirth #1, Robotman's origins seemed to revert to what they were prior to Flashpoint. When a young EMT named Casey Brink is witness to Robotman being hit by a garbage truck, she finds herself pulled into a new iteration of the Doom Patrol, one that evoked the team's surreal glory days of the '90s. And once again, Robotman found himself in the middle of it all, fighting side by side with the teammates he'd known for years.