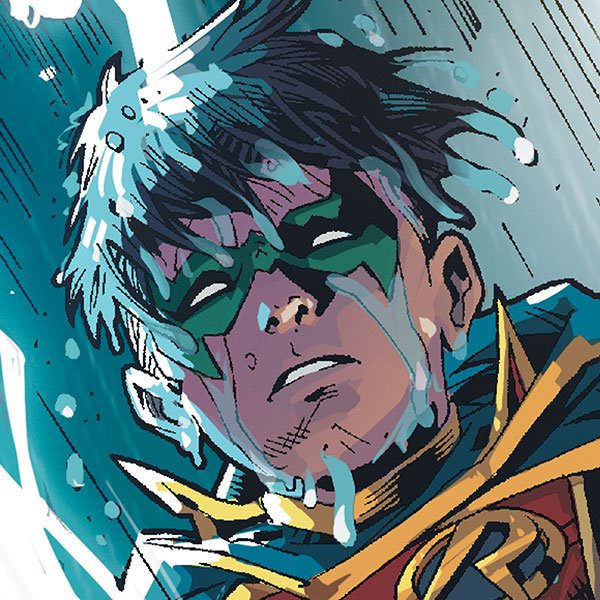 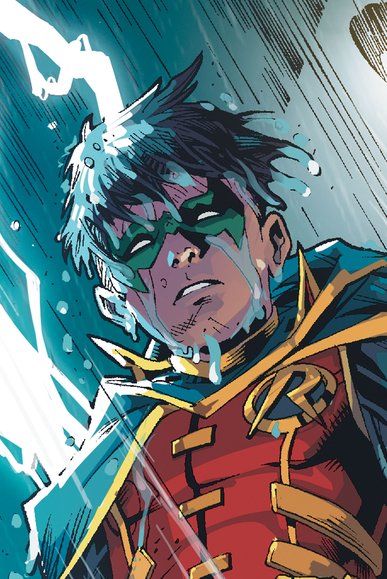 The son of Bruce Wayne and Talia al Ghul, Damian Wayne was born to a life of adventure, but he struggles daily against the lesser angels of his nature.

The son of Bruce Wayne and Talia al Ghul, Damian Wayne was born to a life of adventure, but he struggles daily against the lesser angels of his nature.

It’s not often that something takes Batman by surprise. But that’s what happened when he learned that not only had he fathered a son with famed assassin Talia al Ghul (the daughter of Super-Villain Ra’s al Ghul), but she’d been raising the child in secret within the League of Assassins. Kept away from Gotham City and his father until his adolescence, Damian Wayne exploded into the Dark Knight’s world in a flurry of violence, tossing the entire Batman Family into disarray.

Arrogant, cold and undeniably lethal, Damian found the transition from the unforgiving world of the League to Batman’s staunch moral code to be a long and trying process—but a worthwhile one, as Damian ultimately proved himself worthy of becoming Robin at his father’s side.

Though he sometimes struggles with his past and the legacy of his mother and grandfather, Damian now wants nothing more than to be a Super Hero like his father. 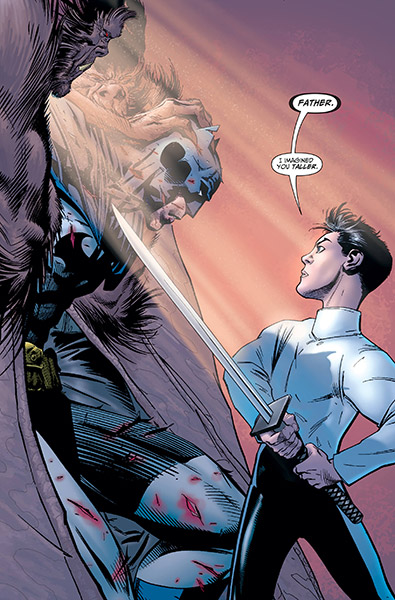 The first time Damian was featured in a comic, he was an unnamed baby in the 1987 graphic novel BATMAN: SON OF THE DEMON, a story that was supposed to exist outside of the main continuity of the DC Universe. He was conceived by Bruce Wayne and Talia al Ghul in a night of passion, but his birth was kept hidden from his father and he was left at an orphanage by his mother.

Years later, however, in BATMAN #655 (2006), it was revealed that Damian’s conception had happened within canon, and that Talia had raised the boy in the League of Assassins. After his conception, Talia had the embryo of Damian removed from her body and grown in an artificial womb, allowing her to manipulate his genetics to perfect his fighting skills.

Talia sent Damian to Gotham, intending for him to distract Batman from her criminal schemes. But things didn’t go as planned. Despite herself, Talia was concerned for her son’s future and wanted to get him away from her own father, Ra’s al Ghul. Damian’s integration into the Batman Family was tumultuous at best, full of brutal fights, harsh betrayals and no shortage of bad blood spilled. But in the end, the cruelty and rage that had calcified around Damian’s heart were chipped away.

Damian became Robin, first at the side of Dick Grayson, who’d taken up the Batman mantle in Bruce Wayne’s absence, and later beside his father, as one of Gotham City’s guardians.

Like his father, Damian has no innate metahuman abilities or powers. Due, however, to his mother’s biological engineering and his training by the League of Assassins and Batman, he’s a world-class martial artist, a brilliant detective, a master of weaponry and an Olympic-level athlete, despite his young age.

In addition to Damian’s physical and mental skills, the League of Assassins used advanced technology to engineer and modify his body from birth, meaning that they were able to transplant organs, bones and tissue to repair any damage Damian might sustain while he was under their care.

After he was killed by the League for betraying them, and his subsequent resurrection, Damian displayed temporary powers of flight and super-strength. But they dissipated shortly after he was returned to life. 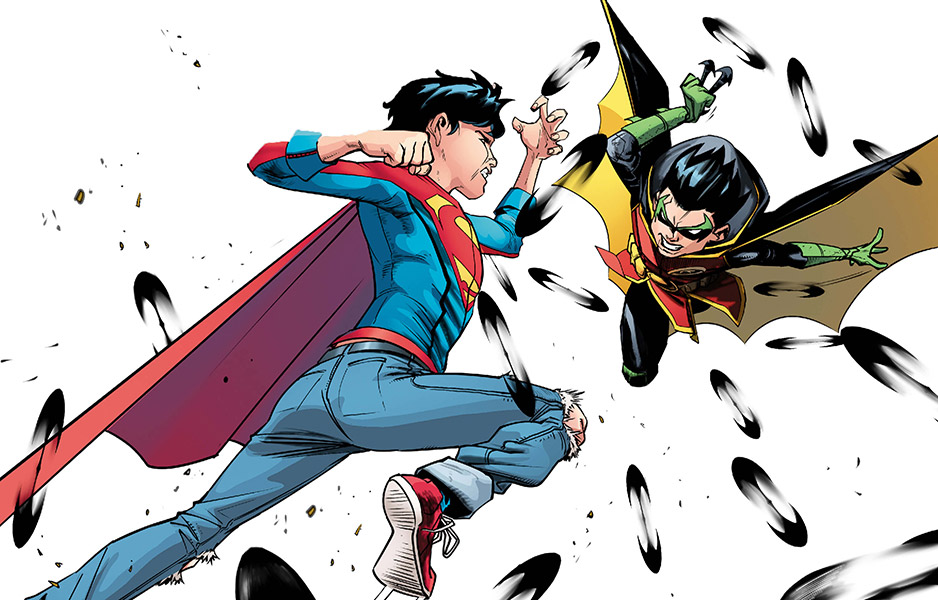 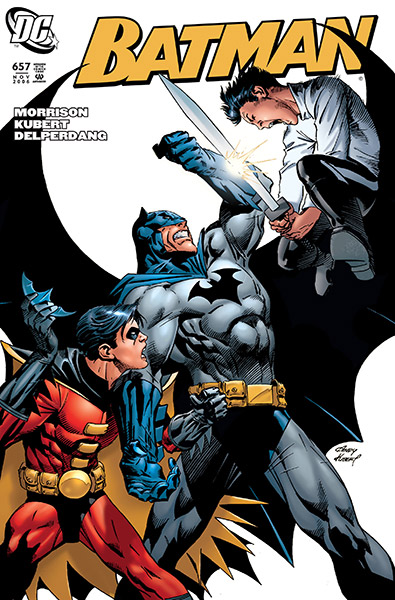 Damian’s introduction to his biological father did not go smoothly. Sent to Gotham by his mother, Talia, in an effort to disrupt Batman’s efforts in the city, Damian decided to stake his claim on his father’s legacy. Bruce and the rest of the Batman Family were unsurprisingly wary of the sudden addition to their ranks, but they were unable to turn the egomaniacal eight-year-old away.

Having been raised since birth in the League of Assassins, and manipulated by his own mother, Damian believed the only way to be accepted by his father would be to prove himself useful to Batman. But he was unable to understand Batman’s moral code. On his first mission to prove himself worthy, Damian caught and beheaded a low-level Super-Villain called the Spook and brought his head to the Batcave as a trophy (BATMAN #657, 2006).

Needless to say, Bruce, like the rest of the Batman Family, was horrified. But Damian was undeterred. Believing it was his birthright to be Robin, he attacked then-current Robin Tim Drake, intent on killing him and taking his place. He was unsuccessful, albeit barely, and the violence sparked a grudge between him and Tim that would last for years.

Initially skeptical of the boy’s heritage, Bruce eventually learned that Damian was indeed his son. Moments later a catastrophic explosion nearly killed both Damian and Talia. They survived, but not without extensive care from the League of Assassins. Talia then taught Damian more of his own history, and Damian learned that he’d been intended as a new “vessel” for Ra’s al Ghul to inhabit upon his resurrection—a process that would literally tear Damian’s soul out of his body.

In a rare moment of compassion, Talia stopped the ritual and allowed her son to escape. Damian fled back to Gotham to rejoin Batman and warn him of the League’s scheme to resurrect Ra’s. The League tracked him to the Batcave, forcing Damian, Robin and Batman to fight alongside one another against the assassins. In this moment Damian began earning the trust of his new comrades.

With the League deterred, Damian decided to stay with his father. 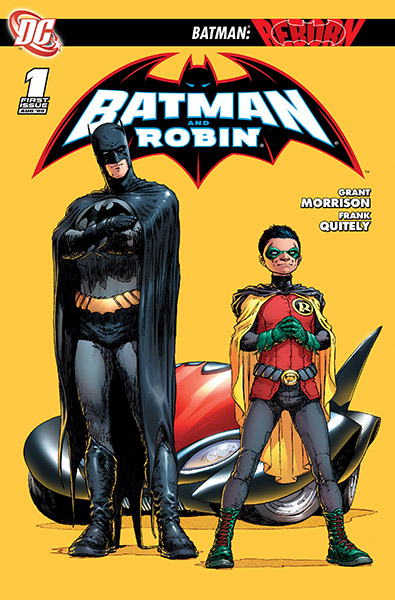 Unfortunately, Damian’s time fighting side by side with his father was limited. 2008’s FINAL CRISIS left Batman displaced in time and believed dead, and Gotham City without a protector. Dick Grayson eventually took on the mantle, much to Damian’s initial dismay.

Knowing the boy’s capacity for violence, Dick didn’t want to leave Damian unsupervised and alone. So he asked Tim Drake to step down from his role as Robin and allow Damian to take his place. Tim eventually acquiesced and took on a new role (that of Red Robin) while Damian officially became Robin.

Things did not go smoothly for the new Batman and Robin. Damian’s ego and penchant for violence made him unruly in the field. It took encounters with Super-Villains like Professor Pyg to make Dick and Damian a well-oiled crime-fighting machine. Though Damian was reluctant to admit it, he began viewing Dick as a big brother. After Bruce returned to Gotham, Dick and Damian continued to work closely with each other, until 2011’s FLASHPOINT rebooted the continuity of the DC Universe.

Following FLASHPOINT, Damian was made Bruce’s partner. Together, they patrolled the streets of Gotham as the Dynamic Duo, though Damian’s pre-FLASHPOINT history with Dick Grayson was not entirely deleted. In this new continuity, Damian still occasionally struggled with his League of Assassins history and often came to blows with his mother, Talia, but largely functioned as an accepted member of the Batman Family.

Damian was laid to rest in the Wayne family cemetery—but not for long. Ra’s al Ghul stole his body, intent on reviving and returning him to the League of Assassins. The plot resulted in Damian’s body being taken to the hellish alternate dimension of Apokolips, and Bruce mounted a full-scale assault to retrieve and revive his son.

Damian was returned to life with a few added abilities. His resurrection gave him temporary powers like flight and incredible strength, but they faded over time. 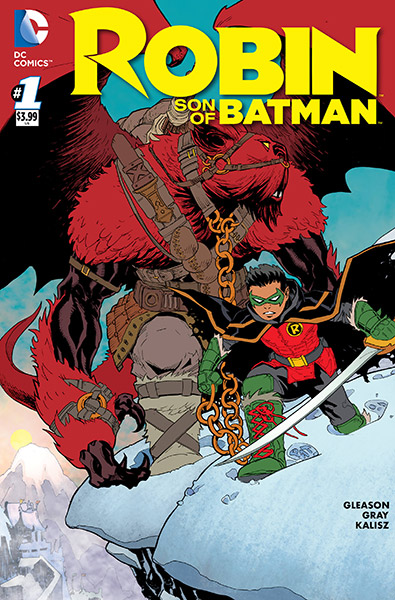 The Year of Blood (ROBIN: SON OF BATMAN)

Following the presumed death of Batman (in 2015’s “Endgame”), Damian left Gotham City. When he was a child, the League had forced him to participate in a ritual called the Year of Blood, in which he traveled the world and raided various relics and artifacts from arcane cults and cultures, doing whatever it took to complete his mission. Now Damian decided to go back and undo the harm he’d caused, returning what he’d stolen and fixing whatever he’d broken.

Along with Goliath, a monstrous bat hybrid, and Nobody, the orphaned daughter of a Super-Villain he'd fought alongside Batman back home in Gotham, Damian traveled the globe trying to absolve what he could of his tumultuous past. Eventually he was forced to return to Gotham when the Court of Owls sparked 2016’s ROBIN WAR.

Following 2016’s DC UNIVERSE REBIRTH #1, Damian appointed himself leader of the Teen Titans, into which he begrudgingly recruited Starfire, Beast Boy, Raven, Kid Flash and Aqualad. Despite his certainty that none of them were up to his standards as Super Heroes, he set about training the team.

When not with the Teen Titans, Damian fell into a tenuous friendship with Jon Kent, the son of Clark Kent and Lois Lane, who’d been training with his father to become Superboy. Though Jon’s bubbly personality was the opposite of Damian’s, the two worked together as an unofficial team (SUPER SONS, 2017-2018).

Animation:
• Batman: The Brave and the Bold