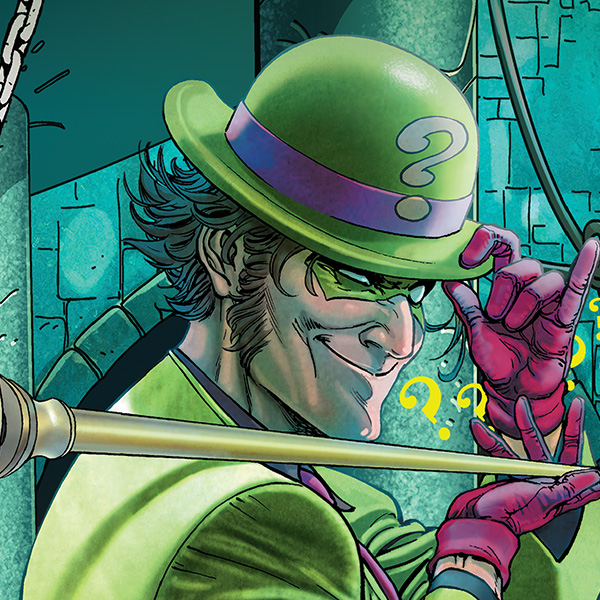 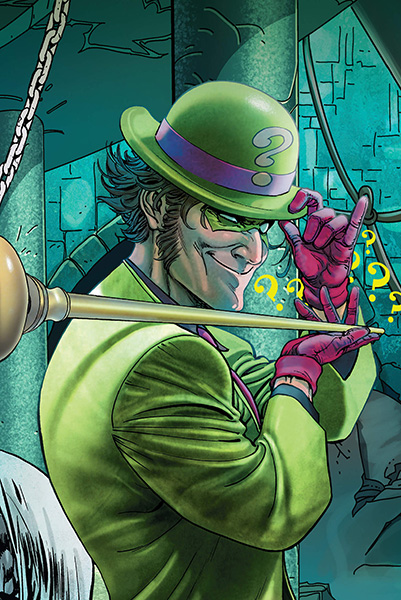 The most important thing to Edward Nygma is being recognized as the smartest person in the room. Even if he must kill for that recognition.

The most important thing to Edward Nygma is being recognized as the smartest person in the room. Even if he must kill for that recognition.

Not every costumed criminal in Gotham is in it for the money or the fame, some, like Edward Nygma aka the Riddler, just plain want to be recognized for what they truly are. In Eddie's case, that means finally getting his due as the smartest person the city has ever seen. And, well, if the pursuit of that title happens to lace his pockets with some money in the process, then, well, he'll just consider that a bonus.

Riddler's obsessions aren't all ego -- he really is one of the most clever villains around. Pathologically fixated on puzzles of all sorts, he spends his time planning elaborate heists and capers specifically designed to challenge the deductive skills of whoever attempts to catch him. So far, he's found the efforts of most everyone wanting -- that is, except for The Batman, who always seems to know just what his next step will be. Riddler's rivalry with Batman is more than just a criminal grudge match at this point, it's a matter of pride. 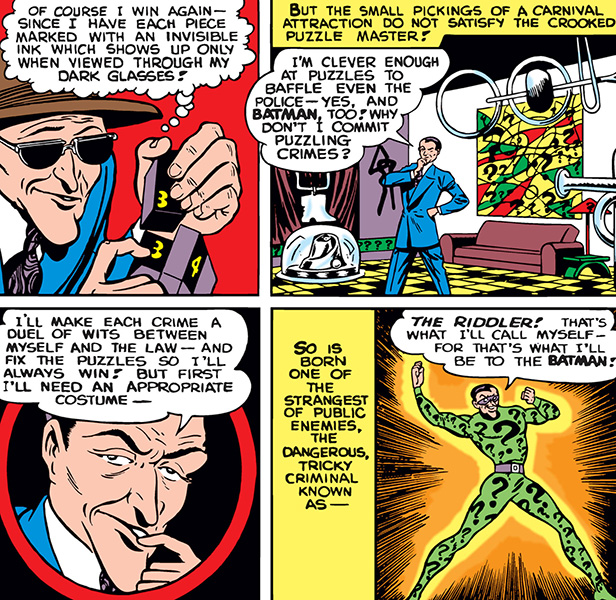 A former employee of Wayne Enterprises, Eddie Nygma rose through the ranks at the company despite a persistent frustration with the world around him, both inside his office and out in the city. To Eddie, Gotham just wasn't intelligent enough to understand or appreciate his brilliance -- and the ignorance of the population at large was more than just annoying, it was potentially deadly. With a childhood obsession with puzzles and riddles keeping him preoccupied, Eddie began concocting a scheme that would plunge all of Gotham into a survival-of-the-fittest scenario of his own design, only in his world, it would be the smartest who would survive.

Using a disastrous hurricane as cover, Eddie sprung his trap with the Wayne Enterprises power grid, sending the city into a devastating blackout. During this time, called the Zero Year, Eddie began crafting his persona as the Riddler for the first time where he began ruling over the post-apocalyptic Gotham with an iron fist, demanding that people solve his puzzles and answer his riddles if they wished to live.

Although Batman was successful in defeating him and reversing the effects of the Zero Year, Eddie had realized that his identity as the Riddler wasn't something he could easily leave behind. He maintained his new gimmick through multiple incarcerations in Arkham Asylum to become one of Batman's most persistent foes. 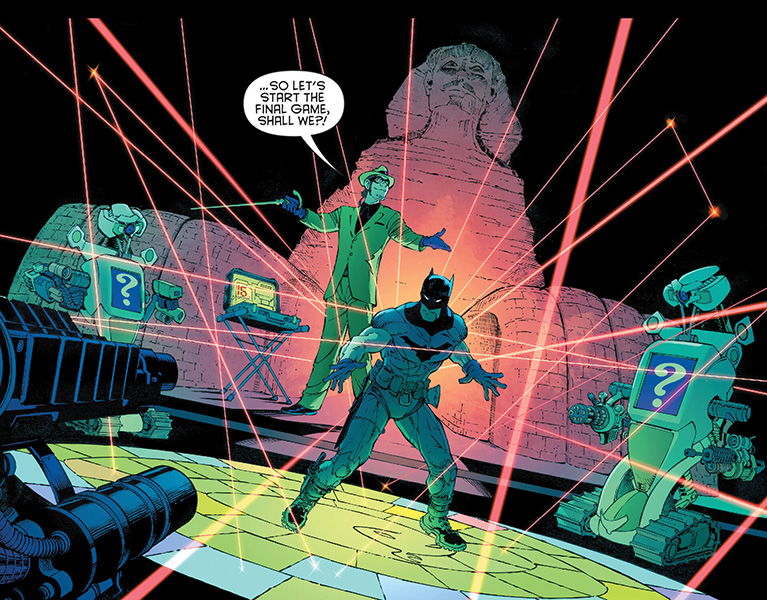 Eddie has no metahuman abilities, enhanced strength or healing factor. Instead, he relies entirely on his intellect to pull him through his entanglements with Gotham's various Super Heroes and the GCPD. His technical skills are also of note, allowing him to invent and construct complicated mechanisms and devices to help execute his plans, from puzzles to weapons. His IQ and skills of deduction are so high, in fact, that he has been called in on more than one occasion to act as a (frequently unwilling) assist for both Batman and the police when they find themselves up against a mystery they're having no luck solving. This is usually a last resort, however -- Eddie is as duplicitous as he is smart.

Despite his ego, Eddie is not above working with teams. He frequently utilizes a gang of henchmen to assist in his schemes, even if they do just wind up acting as cannon fodder when the Batman inevitably swings in. 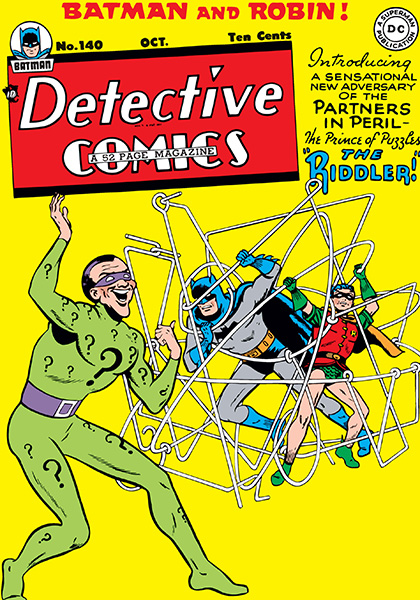 The Golden, Silver, and Bronze Ages

Eddie was introduced to Gotham as fairly standard costume criminal with a strange gimmick: the compulsive need to leave clues behind at every one of his crime scenes. He wore a green leotard covered in question marks and a purple domino mask, frequently designing capers with deadly traps designed specifically to thwart the Dynamic Duo.

This original incarnation persisted through much of the '40s and '50s, continuing on into the '60s with his first live-action adaptation in the 1966 BATMAN TV show (in which he was portrayed by actor Frank Gorshin) which eventually updated his costume from spandex to a green, question mark emblazoned suit.

During the early 90s, Eddie was given a fleshed out origin story (DETECTIVE COMICS ANNUAL #8) which established he became obsessed with solving puzzles as a very young child. As he grew up, he felt alienated from the general population which eventually drove him to commit his first crime. Over time, his fixation on puzzles only grew and his interest in building them into his crime scenes became all consuming, to the point where he earned the attention of Batman, who he believed was finally his intellectual rival.

Riddler's career as a criminal began taking a turn in the early 90s when he became interested in solving the mysteries of the occult. He was involved in the original summoning of the Bat demon, Barbatos, which would return to haunt Gotham again and again in later years ("Dark Knight, Dark City", 1990).

Later, Eddie transitioned away from the occult to the more mundane criminal circles and became an informant for mafia boss Carmine Falcone (BATMAN: THE LONG HALLOWEEN, 1995). 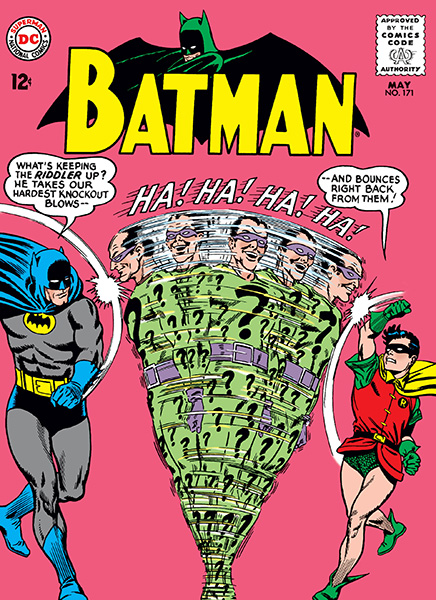 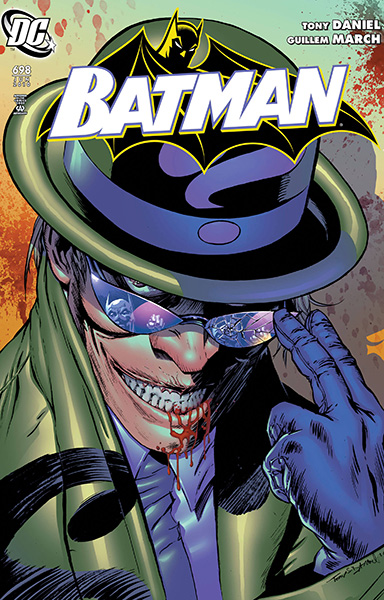 Eddie stepped directly into the spotlight as a major player in Batman: Hush (2003) when he was diagnosed with terminal brain cancer. Seeking any way to cure himself, he used one of Ra's al Ghul's Lazarus Pits, a plan which brings him directly into contact with Tommy Elliot, aka Hush, after it was revealed that Elliot's mother suffered from a similar disease.

Riddler and Hush began working together on Hush's scheme to gain revenge on his childhood friend, Bruce Wayne, by hatching a plan that Riddler almost immediately hijacked as his own, relying on his ability to manipulate and deceive various Gotham rogues. During this process, he correctly deduced that Bruce Wayne was Batman and hired Clayface to impersonate the deceased Jason Todd prior to Jason's resurrection.

Hush eventually retaliated against Riddler's usurping of his plan by attacking him on a rooftop. This, coupled with the vast majority of Gotham's criminal element realizing Eddie had played them, made the city unsafe for Riddler for a time and he slipped into hiding, becoming more brutal than he'd been in the past to survive. He updated his look, covered himself in question mark tattoos, and began seeking ways to avenge his image.

Later, Eddie was temporarily reformed after a head injury "cured" him of his obsessions and psychosis. He became a private consultant and investigator for the GCPD and various independent detectives around the city -- though not many believe that he was genuine in his new intentions.

Sure enough, Eddie's facade of rehabilitation began to slip when Dick Grayson, working as Batman after Bruce Wayne's "death" (FINAL CRISIS, 2009) began to suspect that he had been orchestrating his own mysteries to solve in order to get revenge on those who he believed had wronged him. Briefly, Eddie partnered up with a young woman named Enigma who claimed to be his daughter, but her actual parentage was never substantiated. Just before the continuity altering events of FLASHPOINT (2011), it was heavily implied that Eddie had murdered Enigma in cold blood ("Eye of the Beholder", 2011). 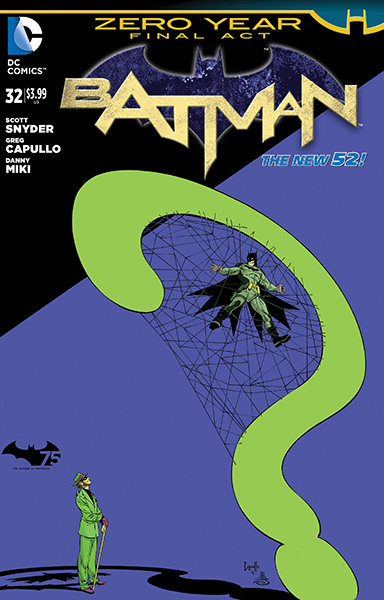 Following the Flashpoint, Riddler's personality and gimmick were left largely unchanged. He was regularly seen as an inmate of Arkham Asylum.

During 2014's "Zero Year" storyline, it was revealed that Eddie had been a disgruntled Wayne Enterprises employee who had risen through the ranks during Bruce Wayne's pre-Batman absence. However, upon Bruce's return to the company, Eddie was let go and began a slow spiral into madness and delusion that sent all of Gotham into a near-apocalyptic state. After triggering a city-wide blackout on the eve of a devastating hurricane, Eddie, now going by "Riddler" for the first time in this continuity, began a megalomaniacal crusade to make Gotham "smarter" by subjecting the desperate citizens to a nonstop onslaught of deadly tests and puzzles.

Ultimately, Riddler was stopped by Batman and sent away to Arkham Asylum. 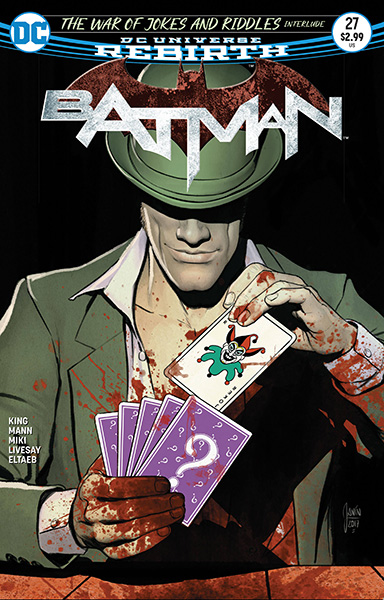 Following the events of 2016's DC Universe Rebirth #, a similar flashback event, 2017's "The War of Jokes and Riddles" was revealed to have taken place during Bruce's earliest years as Batman. Here, Riddler was shown to have been the leader in one side of a massive gang war with the other side lead by the Joker immediately following the events of "Zero Year."

As part of the war, Riddler recruited half of Gotham's criminal underworld to his side while Joker claimed the other. The fighting spilled out into the streets with Batman trying (and frequently failing) to mitigate the collateral damage. Briefly, Batman joined Riddler's side of the conflict, but ultimately betrayed him prior to the final confrontation, ensuring that both Riddler and Joker "lost" the fight.