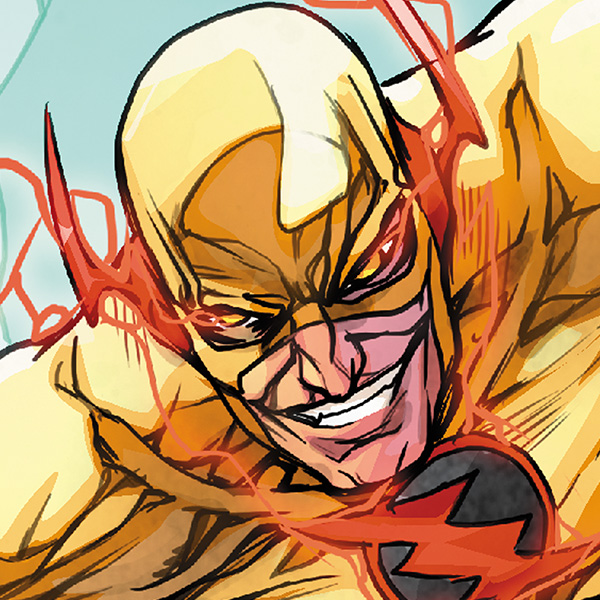 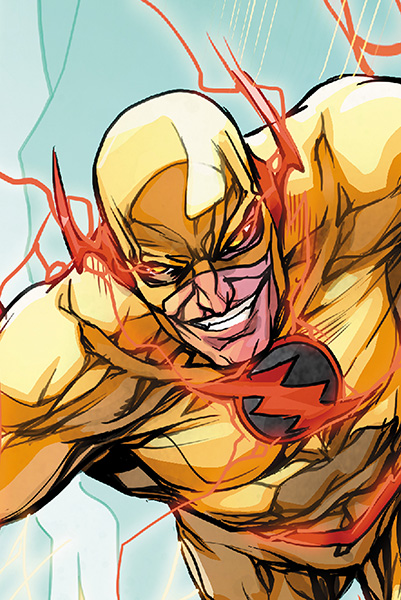 The name Reverse-Flash belongs to more than one evil speedster, each of whom believes The Flash wastes the potential of the Speed Force.

The name Reverse-Flash belongs to more than one evil speedster, each of whom believes The Flash wastes the potential of the Speed Force.

You can’t outrun the future. That’s what the Flash has learned each and every time the Reverse-Flash has raced back in time to battle him. Obsession is a destructive force, with the Reverse-Flash hounding and tormenting the Flash at every turn throughout history. But because their destinies are linked, the Reverse-Flash cannot kill the Flash without causing his own demise, though that doesn’t stop him from wanting to destroy everything and everyone the Flash cares about. What makes the Reverse-Flash so hell-bent on torturing the Flash? It isn’t a deep-seated hatred, but rather a warped desire to be loved by his favorite Super Hero.

Born in the 25th century, Eobard Thawne grew up idolizing the Flash. As he studied everything about his favorite hero, Thawne realized that he was destined to become the Flash’s greatest nemesis. The realization drove him mad, and he replicated the same chemical accident that gave the Flash his super-speed. The Reverse-Flash acquired most of the Flash’s powers and abilities but none of his compassion or heroism. With the power to travel through time, the Reverse-Flash made it his mission to destroy everything the Flash loved, and he stopped at nothing to taunt and torment the Super Hero. 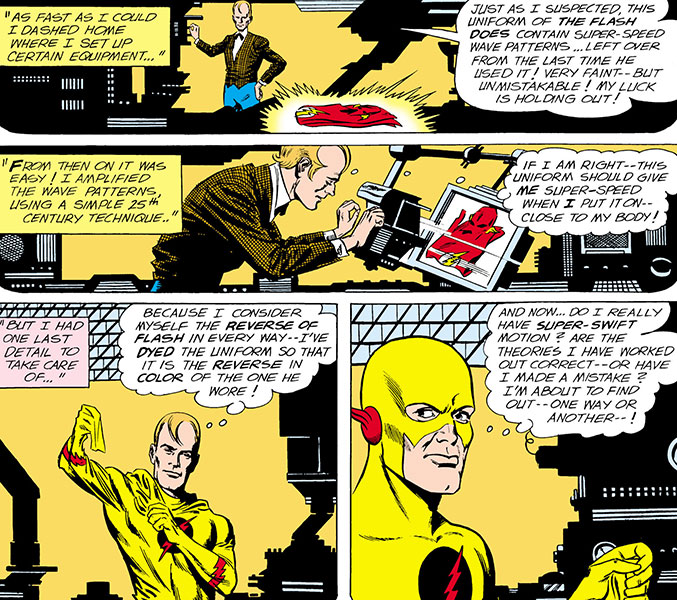 After a violent fight with his father, young Daniel West (the brother of Iris West) ran away from home and took up a life of crime. He was captured by the Flash and spent five years in jail. When he got out he returned to his criminal career and suffered an accident while driving a getaway car. He crashed into a monorail outfitted with a Speed Force battery. Daniel was impaled on a rail, which imbued him with Speed Force energy. When he discovered there were other speedsters like him, Daniel set out to destroy them one by one and steal their energy. His goal: to travel back in time to kill his father and change his destiny. But the Flash thwarted his plan, and the Reverse-Flash ended up behind bars in Belle Reve Prison. 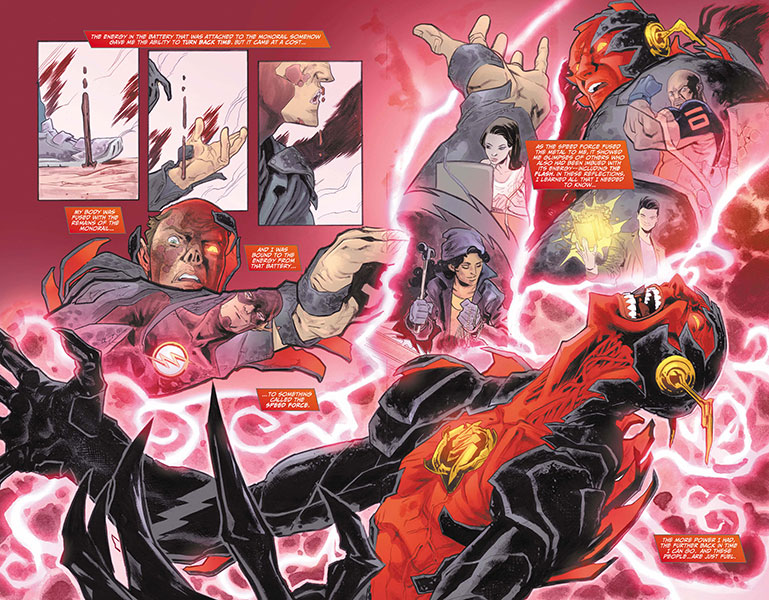 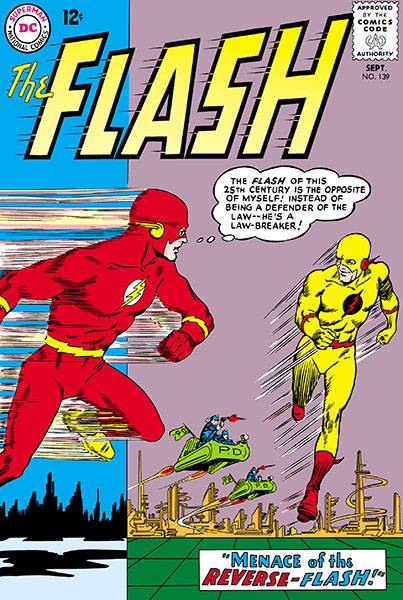 The original version of Eobard Thawne was a 25th-century mastermind who’d found the Flash’s costume in a time capsule. Using the technology of the future, he was able to absorb the Flash’s powers by wearing the costume, the colors of which he reversed. After committing a series of crimes (for which he dubbed himself “Professor Zoom”), he was apprehended by the Flash when the hero traveled into the future. He later exacted a terrible revenge by killing the Flash’s wife, Iris, as revealed in THE FLASH #283 (1980). In THE FLASH #324, Barry killed Thawne before he could kill another woman to whom Barry had become engaged, Fiona Webb.

In the wake of 1994’s five-issue limited series ZERO HOUR: CRISIS IN TIME, Barry Allen was revealed to be this version of Thawne’s great-uncle.

Following 2009’s reimagining of Thawne in THE FLASH: REBIRTH, 2011’s FLASHPOINT tie-in FLASHPOINT: REVERSE-FLASH #1 (“My Revenge”) traces the roots of Thawne’s obsession with the Flash. At first Eobard dreamt of being just like the Super Hero. But when they met in the future, Eobard realized they were destined to be enemies. Eobard vowed to destroy the Flash, so he traveled back to the day of the accident that imbued the Flash with the power of superhuman speed. The Reverse-Flash planned on killing the Flash, but he realized they were forever linked; the Reverse-Flash cannot exist if the Flash dies. Instead of destroying the Flash, the Reverse-Flash vowed to make the Flash’s life a living hell. He traveled back to the Flash’s childhood and stole his best friend—and then killed the Flash’s mother. 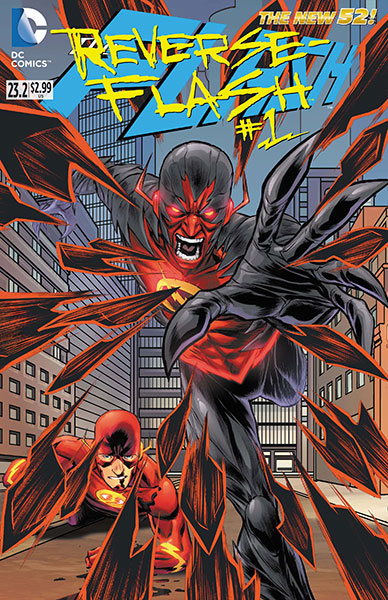 The origin of the New 52’s Reverse-Flash was revealed in THE FLASH #23.2 (2013), “Reverse-Flash.” Daniel West was driving a getaway car when he crashed into a monorail and the power of a Speed Force battery poured into his body. Daniel discovered he could move at lightning speed and travel through time. He went on a rampage, stealing the Speed Force from others like him and plotting a return to his childhood to kill his father. This, Daniel believed, would make everything right between him and his beloved sister, Iris, and give him a second chance at happiness. But when he returned to his past, he was confronted by his younger self and the Flash.