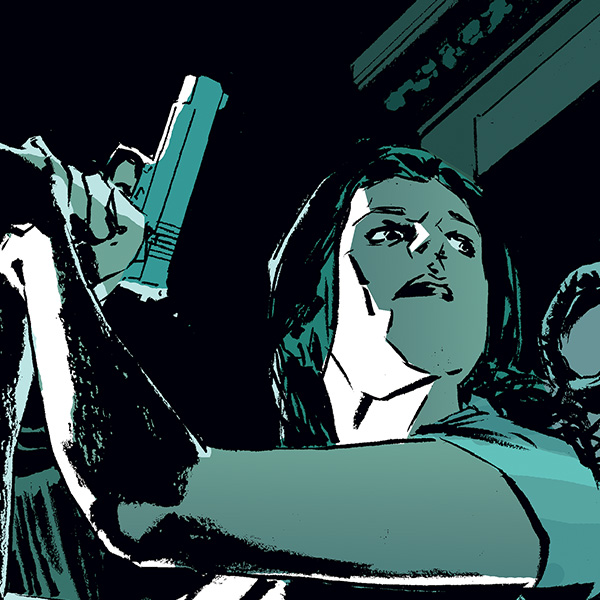 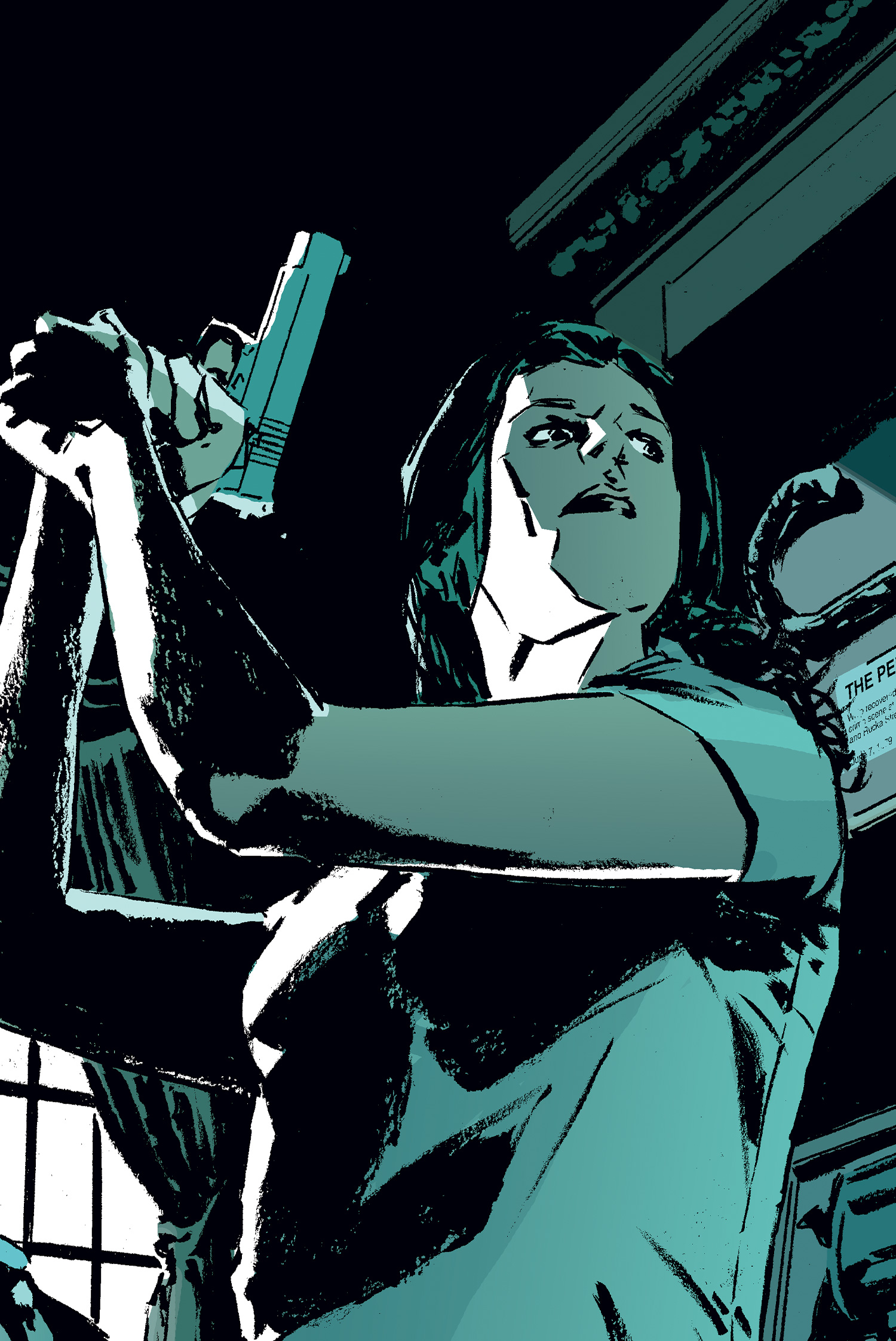 Detective Montoya was always one of Gotham’s finest police officers. But when a lifetime of service couldn’t give her the answers she needed, she became The Question.

Detective Montoya was always one of Gotham’s finest police officers. But when a lifetime of service couldn’t give her the answers she needed, she became The Question.

Renee Montoya was first introduced to the world in Batman: The Animated Series, as a morally strong, virtuous, and open-minded beat cop partner to the oafish and outspoken Harvey Bullock on the Gotham City Police Department. Whereas Bullock placed no faith in Batman’s capacity as protector of Gotham City, Montoya was willing to give him a chance to work alongside them, as long as their alliance continued to be productive. Through her early appearances, Renee Montoya earned the distinction of being one of the few police officers in Gotham City whom Batman could trust.

It was perhaps this cautious trust in masked operatives which eventually made Montoya a prime candidate for vigilantism herself… when she was approached to continue the work of the mysterious crime fighter known as The Question. 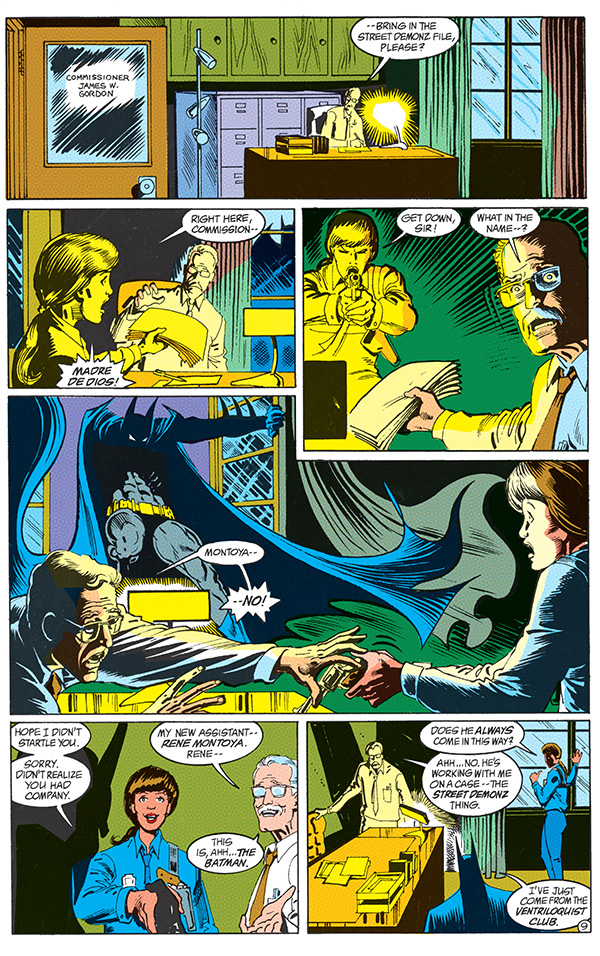 Born in America to Dominican immigrants, Renee Montoya was raised in a devoutly Catholic household with reverent respect to the tenets of law and order. Renee followed these instilled childhood beliefs into a role protecting the city which fostered her as a member of the GCPD. Renee’s unflappable dedication to her duty saw her steadily rise through the ranks of Gotham’s Finest, until (then retired) Commissioner Gordon had personally chosen her as a member of Maggie Sawyer’s elite Major Crimes Unit — a unit comprised solely of officers that Gordon knew for certain could be trusted… a rare enough qualification in Gotham City. 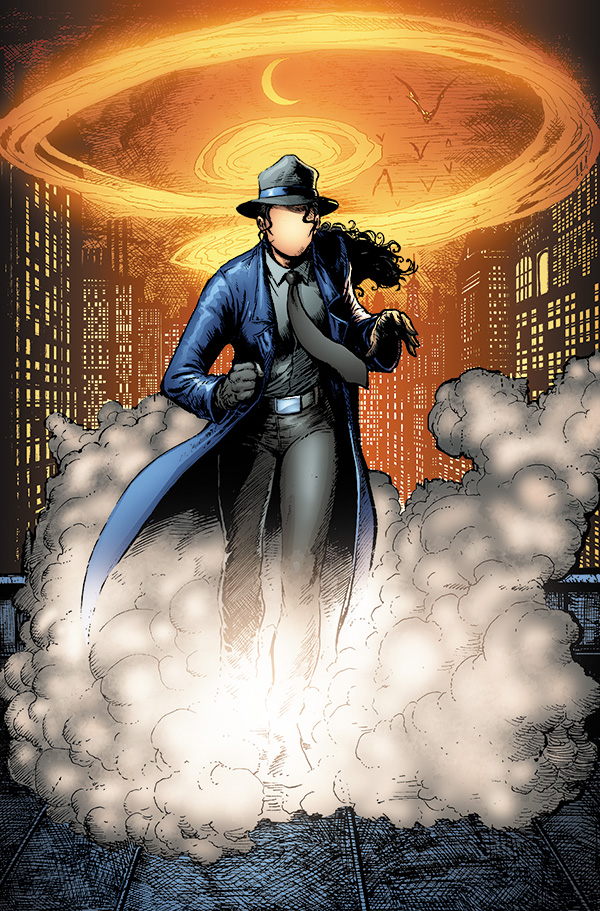 Renee Montoya is one of the most skilled and persistent detectives to ever wear a badge, and has been trained in combat by Richard Dragon, one of the world’s greatest martial artists, and his pupil, Vic Sage — the original Question. As The Question, Renee wears a pseudoderm mask which binds to her face with the use of a proprietary binary gas, rendering her impossible to identify in costume. 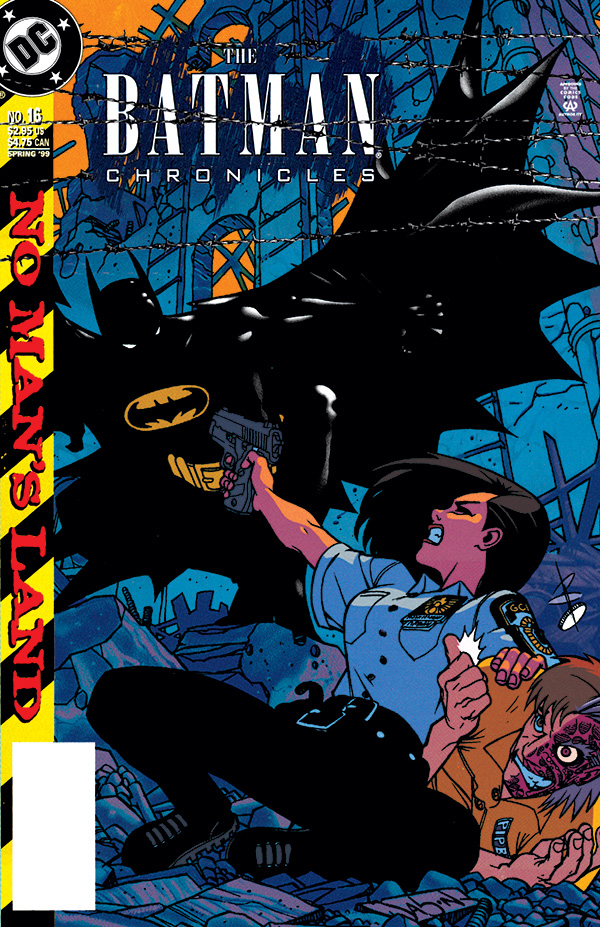 Although Renee Montoya had dutifully serve in the background as a stalwart officer of the law since 1992’s BATMAN #475, it was in the 2000 NO MAN’S LAND story arc where Renee truly began to stand out. With the city in shambles thanks to a deadly plague followed by a devastating earthquake, with aid completely cut off from the US government, and with Batman himself nowhere in sight, it was Renee who rose up to maintain her part to maintain order and assist those in need… all with the unlikely partnership of Two-Face, guided by an uncanny streak of lucky, good side facing coin tosses. Although their relationship was eventually soured by chance, Harvey Dent would never forget the time he spent by Montoya’s side, even growing to love her in his own twisted way. 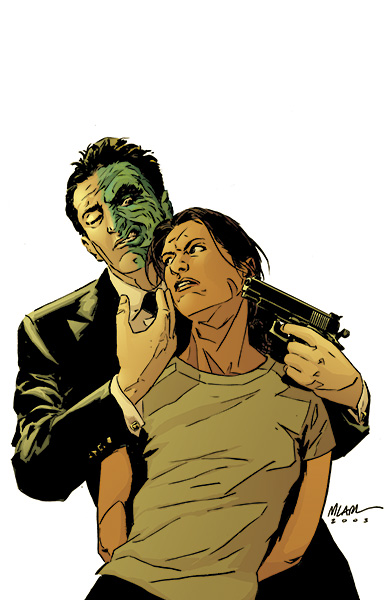 Montoya’s efforts to keep the peace in Gotham during and after the events of No Man’s Land earned her a spot on the illustrious Major Crimes Unit, with a new partner in Detective Crispus Allen and under the guidance of unit leader Maggie Sawyer.

Jealous of Montoya’s newfound success and wracked with fear that she had forgotten about him, Two-Face emerged once more in Montoya’s life to frame her for murder, and to reveal her most closely guarded secret — that Renee was a closeted lesbian, leading a romantic life in secret to keep her sexual identity hidden from friends and family. Though Renee was cleared of the murder charges, the damage of her malicious outing had been done, and Renee found herself no longer welcome in her family’s home. Maggie Sawyer, a lesbian herself, provided solace to Renee in this soul wrenching time, showing her that living life in the open as a gay woman could be the start of new possibilities. (GOTHAM CENTRAL #6-10, “Half a Life”)

Picking up the pieces of her life, Renee and Crispus went on to solve many of Gotham’s seediest crimes together… until when investigating the corrupt fellow officer Jim Corrigan, Jr, Corrigan shot Allen when he got too close to the truth, killing Montoya’s partner. Consumed by rage, Montoya nearly took justice into her own hands by killing Corrigan herself. Instead, she turned in her gun and her badge, and left Gotham Central behind her. (GOTHAM CENTRAL #28-30, 2005) 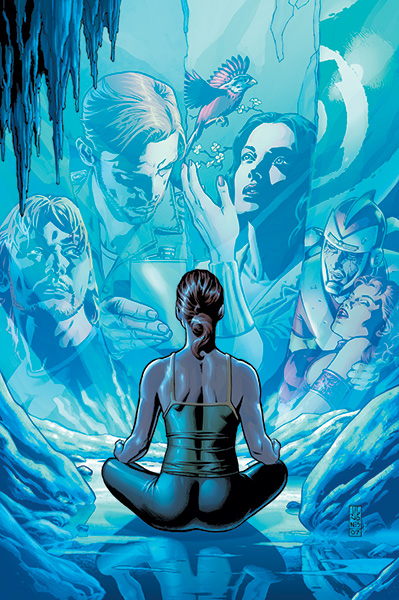 Lost in a spiral of guilt, shame, cheap booze, and available women, the newly unemployed Renee Montoya was at her lowest. But just as she had risen to the occasion when Batman disappeared during No Man’s Land, Renee would rise again during Batman’s year long absence after INFINITE CRISIS, as told in the year long 52 limited series. Renee found herself approached by The Question, the faceless vigilante of Hub City- perhaps the only city in America rifer with crime and corruption than Gotham. The Question enlisted Renee’s services as a private detective (unlicensed), aiding him in the pursuit of the elusive- and perhaps imagined- Cult of Crime, a secret cabal dedicated to sin and depravity for its own sake. The Question and Montoya’s search for the cult took them all over the world, from the nation of Kahndaq- where they saved the lives of Black Adam and his royal family from a terrorist attack- back into the arms of Renee’s former lover, Gotham socialite Kate Kane- who was now fighting crime herself, under the guise of Batwoman.

While The Question and Montoya made significant progress in routing the Cult, tracing it back to Intergang leaders Bruno “Ugly” Manheim and Whisper A’Daire, Renee discovered the truth of their partnership all too late: The Question’s health was quickly deteriorating, and he would soon be dead to lung cancer.

Renee did all she could for her friend, even taking him to the foothills of the restorative hidden city of Nanda Parbat in the Himalayan mountain range. But in the end, Vic Sage, the man who had been The Question, proved beyond saving. And all that was left for Montoya, his final ally and champion, was to don his featureless mask and continue the quest for truth in his name. Renee Montoya would become The Question. 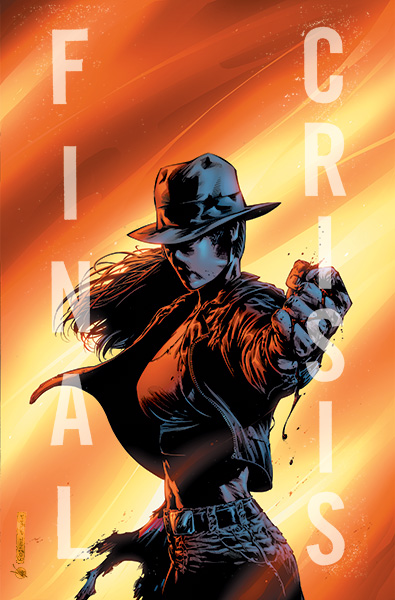 After the death of her friend and mentor, Renee Montoya dedicated her efforts as The Question to finishing his last case: closing the book on the Cult of Crime. To do so, Renee went deep undercover within the organization, and was nearly seduced by its many temptations in the process (CRIME BIBLE: THE FIVE LESSONS OF BLOOD, 2007). But Renee held firm, tracing the Cult’s origins all the way back to the figure of Cain spoken of reverently in the Cult’s Crime Bible — whose true identity all along was Vandal Savage. The Cult of Crime, Renee discovered, had been part of Darkseid’s own plans for the dominance of Earth during the FINAL CRISIS. But in a reunion with her late partner Crispus Allen, whom she discovered to be occupying the role of The Spectre, the two former Gotham cops helped beat back the forces of Darkseid and Savage alike, liberating the nearly omnipotent Spear of Destiny from their grasp (FINAL CRISIS: REVELATIONS, 2008). 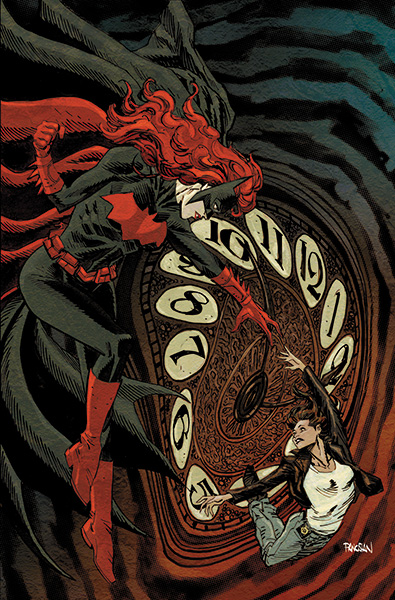 Briefly after the events of FLASHPOINT, Renee Montoya left Gotham City under mysterious circumstances, abandoning her relationship with Kate Kane. She returned years later in DETECTIVE COMICS #41, with the explanation that she had transferred to Blüdhaven for the interim. Montoya was welcomed back into the GCPD as Detective Bullock’s partner once more. Though Montoya was on uneasy terms with Kate at first, she would soon find herself in the role of Batwoman’s police liaison — and, after a fateful run-in with Clock King (BATWOMAN #17-18, 2018), in the role of her girlfriend once more.

But despite her long absence as The Question on the printed page, Renee Montoya had been continuing her vigilante career as an agent of Lois Lane — both on the case of the mysterious, secret agency destroying Leviathan, and the ominous death of Russian journalist Mariska Voronova. It was on this latter case that Renee would be reunited with her former friend and mentor, and the original Question, Vic Sage… although his unexplained return from death, which they both remember even after FLASHPOINT, has only raised more Questions.