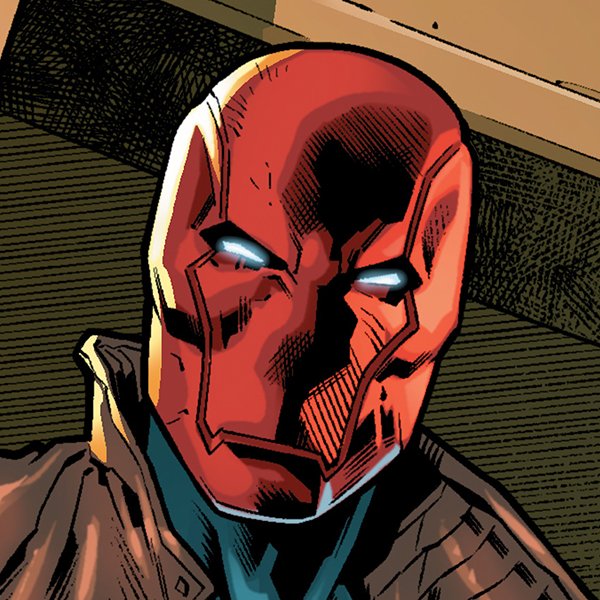 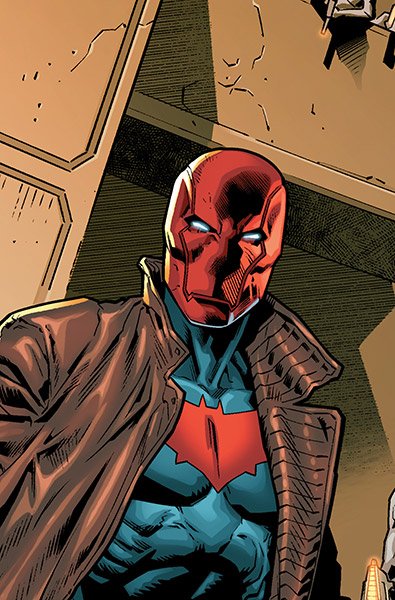 Former Robin Jason Todd parted ways with the Batman over their vastly different approaches to crimefighting, eventually founding his own team, the Outlaws.

Former Robin Jason Todd parted ways with the Batman over their vastly different approaches to crimefighting, eventually founding his own team, the Outlaws.

Death can be a strange thing for DC Super Heroes, especially when it doesn’t quite stick. Just ask Jason Todd. As Batman’s second Robin, Jason died at the hands of The Joker when he was just a child. But he returned to life with the help of a Lazarus Pit, and the literal warping of time and reality.

Unfortunately, Jason’s resurrection was far from a pleasant one. Traumatized by his own violent end, Jason returned to the world unhinged and bent on revenge. Not only for himself, but for everyone caught in the crossfire of the endless catch-and-release cycle of Gotham City’s Super-Villain underworld. He trained himself to be a killer and a mercenary, and took on a new identity and code name—the Red Hood—in order to strike his own brand of fear in Gotham’s criminals.

Over time, Jason learned to deal with his rage in a way that didn’t rack up a body count, and he made peace with the Batman and his fellow Super Heroes. But the bad blood between him and his adoptive family is ever ready to paint their city red once more. 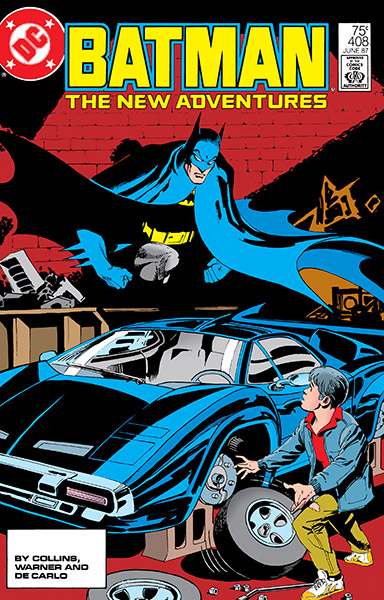 Growing up on the meanest streets of Gotham in and around Crime Alley, the young Jason’s primary focus was on survival. He learned how to lie, cheat and steal for food and shelter, no matter the cost. He even attempted to steal the wheels off the Batmobile when he found it parked and unattended one evening.

Unfortunately, Jason didn’t anticipate just how difficult it would be to steal from the Batman and was caught in the act. Rather than punish him for his attempted crime, however, Batman immediately took a liking to the boy, admiring his daring and resourcefulness.

Bruce took Jason in and trained him as his new Robin. Jason immediately took to the role, but his time as a sidekick was short-lived. Tragedy struck when Jason was brutally murdered by The Joker, sending shockwaves through the Batman Family.

Years later, Jason was brought back to life with the aid of Ra’s al Ghul’s Lazarus Pit. But his rage and betrayal over his murder—and the fact that The Joker never paid for his crimes—shattered his psyche. He reinvented himself as the Red Hood, the identity in which The Joker had begun his criminal career. As the Red Hood, Jason became a vigilante who would do what Batman couldn’t, preventing criminals from walking the streets by any means necessary, even if it meant becoming a murderer himself.

Like the majority of the Batman Family, Jason is a human with no metahuman abilities or powers. Instead, Jason has been trained to the peak of human strength, agility and endurance, and is an expert in multiple combat techniques and martial arts. He has access to and training in any number of weapons developed by Batman or the military.

Prior to 1985’s CRISIS ON INFINITE EARTHS, Jason Todd’s origin story was similar to that of his predecessor, Dick Grayson. The son of two circus performers, Jason traveled to Gotham with their show only to find himself suddenly orphaned when his parents were murdered by Killer Croc (DETECTIVE COMICS #526, 1983).

Both Dick Grayson and Bruce Wayne came to young Jason’s aid. And during his stay at Wayne Manor, Jason discovered the hidden passageway to the Batcave and deduced both his saviors’ identities. From a trunk full of old disguises, Jason crafted a costume of his own and sprang into action, believing he could help Batman and Robin solve the mystery surrounding his parents’ murders.

Rather than reprimand him, Dick and Bruce were inspired by Jason’s quick thinking and innate detective skills. When the dust settled, they both agreed Bruce should adopt Jason just as he had adopted Dick years ago. Busy with his responsibilities with the Teen Titans and convinced Jason had earned it, Dick then passed the mantle of Robin down to him. 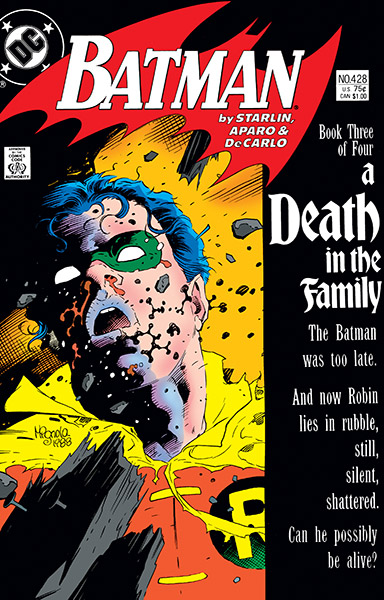 Following 1985’s CRISIS ON INFINITE EARTHS, Jason’s origin and backstory were rewritten, and his time spent as Robin was removed from continuity. He was reintroduced as a scrappy, streetwise orphan who made his living as a thief on the streets of Gotham. He was found by Batman attempting to jack the tires from the Batmobile while it was parked in Crime Alley (BATMAN #408, 1987).

Impressed by the boy’s audacity—as well as his later aid in bringing down a ring of underage criminals under the sway of the seemingly innocent school teacher Ma Gunn—Batman brought the young Jason on as the second Robin. This decision did not go over well with former Robin Dick Grayson, who learned Jason had replaced him after the fact, seeding a rocky relationship among the three crime-fighters.

As time went on, Batman worried about Jason’s tendency toward violence and his distaste for authority. His concerns came to a head when Jason allowed a criminal to fall to his death. This, along with Jason’s other reckless behavior, prompted Batman to remove him from his duties as Robin indefinitely.

Rather than accept his hiatus, Jason stormed off, determined to work on his own. Shortly thereafter, he discovered evidence that the woman he thought was his mother had actually adopted him and that his biological mother was still alive. This mystery took him out of Gotham and to the Middle East and Africa, following a trail of clues that had been left for him. Tragically, Jason would eventually be reunited with his mother only to find that she was a corrupt aid worker and the victim of blackmail by The Joker. At the end of the trail, Jason and his mother found themselves trapped in a warehouse, where The Joker beat Jason nearly to death with a crowbar before rigging the building to explode.

Sadly, Batman arrived too late, and Jason and his mother were killed in the blast.

In 2011’s “Hush” storyline, the first seeds for Jason’s return were planted. As part of a plot by Bruce’s childhood friend Tommy Elliot (a.k.a. Hush), the shape-shifting Super-Villain Clayface transformed himself into an older version of Jason to be revealed to Bruce. Bruce was able to see through the ruse, but found that Jason’s corpse was actually missing from its grave.

It was later revealed that Superboy-Prime’s punch into the fabric of reality (one of the events inciting 2006’s INFINITE CRISIS) had actually damaged the flow of space and time, and brought Jason back to life, unbeknownst to anyone in the Batman Family. Brain-damaged and nearly mute, Jason crawled from his grave and wandered the streets of Gotham until the police took him into medical custody. Unable to identify him, the medical team treated Jason as a John Doe.

After escaping from medical care, Jason lived on the streets, surviving on muscle memory. He was noticed by the henchmen of Talia al Ghul, who recognized the fighting style he employed. Talia then placed Jason into a Lazarus Pit to restore his damaged brain (BATMAN ANNUAL #25, 2006).

Jason found himself driven slightly mad by the Pit’s effects, and harbored a deep rage toward Batman, who’d seen him die and had not avenged him by killing The Joker. Disillusioned with Batman’s nonlethal methods, Jason began training himself as a killer, working for various terrorist organizations to learn their ways before slaughtering their operatives (RED HOOD: LOST DAYS, 2011).

When he was satisfied with his training, Jason returned to Gotham in a new guise, calling himself the Red Hood. He infiltrated and destabilized Gotham’s underground, using extreme measures to isolate and murder some of the most violent criminals in the city—and putting himself at odds with Batman. The two clashed a number of times before Jason removed his mask and revealed himself to Bruce (BATMAN: UNDER THE HOOD, 2006).

Their reunion was anything but amicable. Jason, unable to turn away from his new life as a murderous vigilante, refused to return to the Batman Family. And Bruce, unable to compromise or turn a blind eye to Jason’s violent methods, wouldn’t allow him to continue working in the city. The two remained on-again-off-again rivals for the next several years. 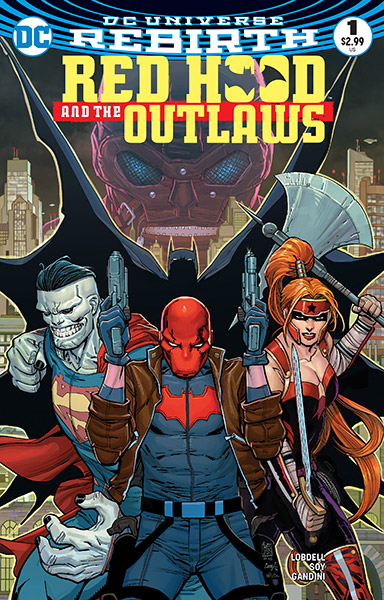 Following the continuity reboot of 2011’s FLASHPOINT, Jason’s backstory and history were slightly modified, becoming somewhat less violent. In this version of events, Jason was not brought back to life by Superboy-Prime, but by Talia al Ghul and the Lazarus Pit.

Rather than maintain his vendetta, Jason struck up a friendship with Roy Harper and Starfire, with whom he formed a team called the Outlaws (RED HOOD & THE OUTLAWS, 2011). Together, the three worked as part-time mercenaries while helping one another resolve their past traumas.

The trio dwindled down to two after Starfire moved to Key West, leaving Jason and Roy to work together as a duo. They formed a mercenary team and sold their skills to the highest bidders (RED HOOD/ARSENAL, 2015).

After DC UNIVERSE REBIRTH #1 (2016), Jason started a new iteration of his Outlaws team, this time joining forces with Bizarro and Artemis to form a “Dark Trinity,” after each of their respective Justice League counterparts—Batman, Superman and Wonder Woman. The team reluctantly fights for good. Or sometimes for profit (RED HOOD & THE OUTLAWS, #1-24).

But nothing lasts forever, and events soon conspired to throw Jason's new life into disarray once again. After being given an old letter from his father, Jason discovered that the Penguin had used his father, Willis Todd, as the fall guy for one of his schemes, a frame job that resulted in Willis being sentenced to life in prison, where he (seemingly) died. Furious, Jason returned to old, vengeful habits, seeking out Penguin and shooting out his eye in retribution for his father (RED HOOD & THE OUTLAWS #25).

That act was not without consequence. In an instant, Jason had shattered his fragile truce with Batman, rocketing quickly to the top of Gotham's most wanted list for attempted murder of the Penguin. Worse yet, a tragic technological accident caused by Bizarro's regressing intelligence was threatening to destroy the entire city… and in stopping it, Artemis and Bizarro were both flung into the multiverse, unable to return home. It would be not long after that Jason would learn that his friend Roy Harper had been killed. (RED HOOD: OUTLAW #27)

With the Outlaws shattered, Red Hood became an Outlaw all on his own. Alone and exiled from Gotham, Jason spent his recuperation continuing the investigation he and Roy had begun into the Underlife, a shadowy network of criminal organizations. (RED HOOD AND THE OUTLAWS ANNUAL #2, RED HOOD: OUTLAW #26-31) Eventually, however, encouraged by a mysterious new figure known as Wingman, Jason would return to Gotham to further his revenge on Penguin, forcing the infamous crime lord to watch as Jason took over the Iceberg Lounge and dismantled all that Cobblepot had built. After successfully forcing the Penguin to fly the coop and flee Gotham, Jason entrusted the running of the Iceberg Lounge to his friend Suzie Su and himself left town once more (RED HOOD: OUTLAW #32-36).

Now, having taken Lex Luthor up on an offer, the Red Hood leads a new team of Titans, to ends yet unknown.

Death in the Family