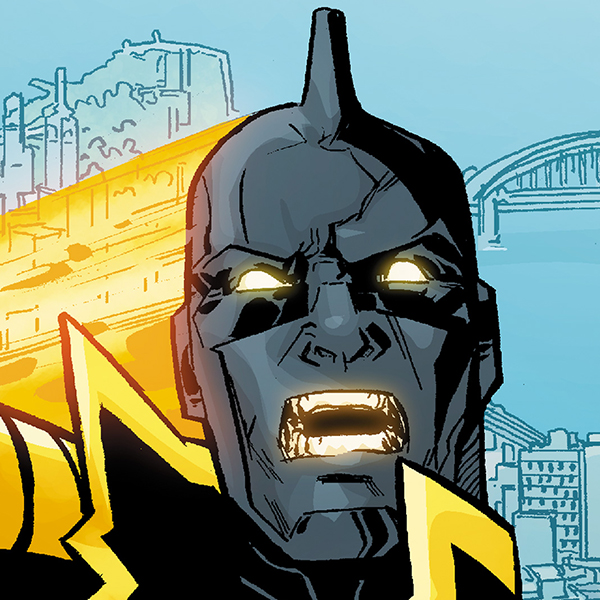 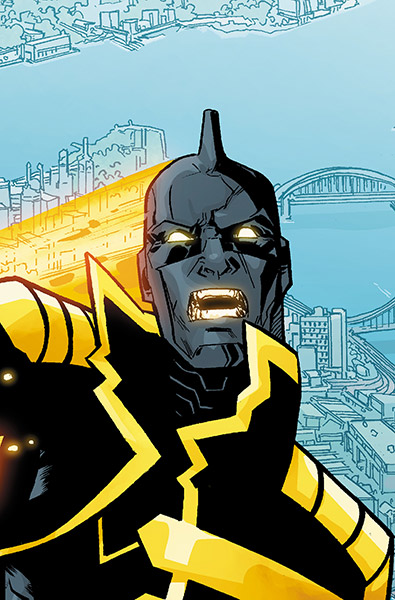 One of DC's longest-running heroes, who's borne many secret identities, The Ray has shined a bright light in the face of crime for almost eighty years.

One of DC's longest-running heroes, who's borne many secret identities, The Ray has shined a bright light in the face of crime for almost eighty years.

Once known in local legends as the “Night Boy,” Ray Terrill’s childhood was a mess of lies and misconceptions. As a young boy, Ray was told by his mother that exposure to sunlight would kill him. So he spent his early years locked in the dark of his home, with only a low-light television and his favorite comic books to keep him company.

However, after years of living in isolation, Ray began to challenge the rules set down by his mother. He started sneaking out of his house at night, only to discover that his light “allergy” wasn’t an allergy at all, but instead a fantastic superpower that allowed him to actually manipulate light.

With the ability to generate and control light energy, using it to build solid constructs and to fly, the Ray is a valuable, versatile Super Hero. The isolation he’s suffered in his past, however, makes him prone to crises of confidence and a reluctance to put himself on the line for others—something he’s had to overcome to step into his role in earnest. 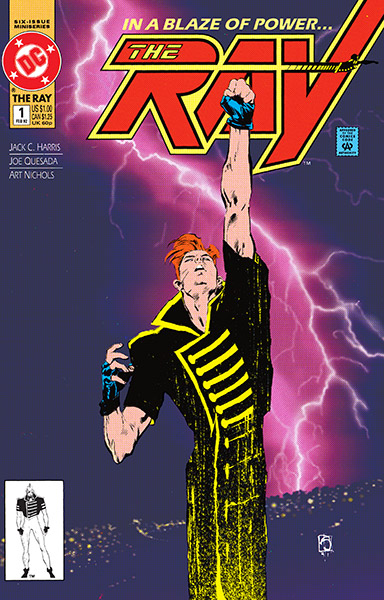 Growing up, Ray Terrill was a local legend—a boy who was completely allergic to sunlight, to the point that any contact with daylight might kill him. Called the “Night Boy” and endlessly whispered about in his neighborhood, Ray spent his childhood isolated and alone, homeschooled and kept inside behind blackout curtains—even his best friend, a young boy named Caden, was banned from the house after nearly exposing Ray to a camera flash.

Ray entered his teenage years slowly getting more and more frustrated with his circumstances until the need for rebellion finally took hold. Fed up and certain that the potential for reward was greater than the risk, Ray snuck out of his home at nighttime, finally able to move freely for the first time in his life. The light from the moon wasn’t enough to trigger any “reactions” in his body, and for the most part, things seemed to be going okay—great, even—for all it might have meant disaster.

Unfortunately, the calm didn’t last, and when Ray approached a group of teenagers standing outside a diner—his first attempt at connecting with anyone outside his closed-off world since Caden had been banned—Ray’s body began to react to the nearby streetlights. His skin began to “crack” away until he apparently exploded, terrifying the kids around him. But the accident was far from fatal, and in reality, Ray had just activated his latent abilities and effectively phased himself into a non-visible spectrum of light.

He quickly fought through his own panic and began to explore his newfound abilities, using the rest of the night to figure out exactly what had happened to him and, eventually, learn to harness his powers into a form that he could actually understand. 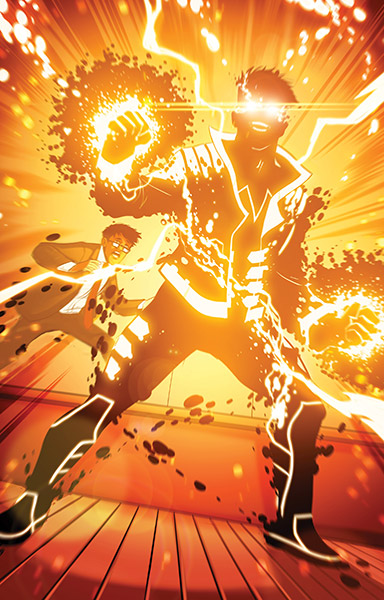 Ray’s metahuman abilities make him capable of absorbing light to create solid light-based constructs, fly and convert himself into pure light energy, making himself impervious to harm. He has accelerated healing and strength, and the ability to manipulate light to create illusions and make himself invisible. 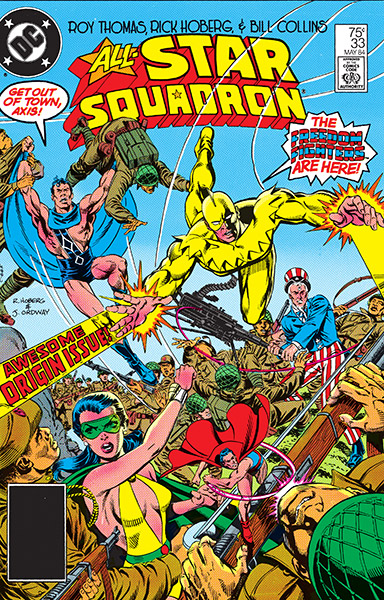 Langford “Happy” Terrill operated as the Ray after a scientist from an experimental branch of the government known as RONOL (Research on the Nature of Light) tricked him into interacting with a cosmic being known as the Light Entity.

Happy was granted light-based superpowers and joined the wartime team known as the Freedom Fighters. After the war, Happy attempted to settle down, but learned upon the birth of his first child, Joshua, that his abilities could be passed to offspring. Unable to control his own abilities, Joshua was placed in suspended animation at just 10 years old, and Happy’s marriage was shattered.

Later, he remarried and had a second son, whom he named Raymond. Ray began exhibiting abilities similar to Joshua’s, which prompted his father to fake his own child’s death and put Ray into the protective care of Happy’s brother. In order to prevent his son’s powers from manifesting further, Happy invented a fiction about his son being allergic to natural light.

Meanwhile, Happy went on to discover more about the nature of his own abilities, adopting a new code name, Neon, for himself.

After the death of his “father” (who was actually his uncle), Ray was finally able to activate his powers. In 1992, around the time of Superman’s death at the hands of Doomsday, Ray was recruited to active duty with the Justice League of America, where he served alongside Super Heroes like Batman, Aquaman, Hippolyta and Black Canary. He later went on to join the Justice League Task Force under the leadership of Martian Manhunter.

Following the disbanding of that team, Ray was moved to the JLA “reserve,” meaning he could be called in to assist with JLA activities should the situation call for it. While on reserve, he interacted with various other teams throughout the DC Universe, including Young Justice, the Justice Society of America and the modern incarnation of the Freedom Fighters.

The continuity-rebooting events of 2011’s FLASHPOINT introduced an all-new Ray, a Korean-American lifeguard named Lucien Gates. Lucien was struck by a particle beam, granting him metahuman abilities. Unlike the Rays that preceded him, Lucien’s light-based powers were far more restrictive, and grounded in real-world physics. He was able to transform himself into living light and fly, but only in a straight line like an actual ray of light. His ability to turn and change direction in his light-form was contingent upon striking reflective surfaces, similar to the way laser beams can be angled and moved with mirrors. 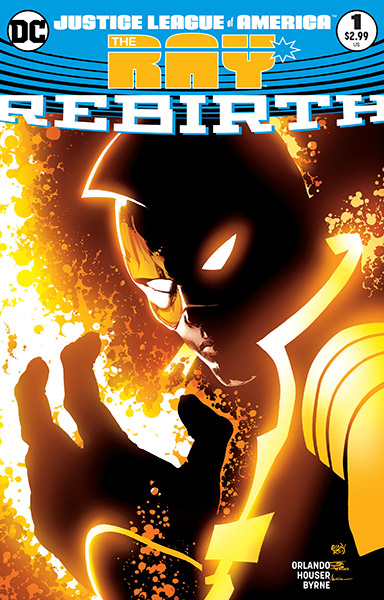 Following DC UNIVERSE REBIRTH #1 (2016), Ray Terrill was given a new origin story and returned to active duty with the Justice League of America. Similar to his previous origin, Ray was known as the “Night Boy” and raised to believe he was allergic to sunlight. He discovered the truth, however, not through his father, but after running away from home as a teenager.

Ray’s explosive entrance into the public eye and subsequent work as a local hero garnered the attention of the Super Hero community and, shockingly enough, of the Batman himself, who eventually approached Ray to join the newly created Justice League of America. Alongside Black Canary, the Atom, Killer Frost, Lobo and Vixen, Ray has begun working to protect the world from the more ground-level threats that the Justice League might lack perspective on.

Ray also spends his time both in and out of costume working to promote the ideals of equality and tolerance as an openly gay man.