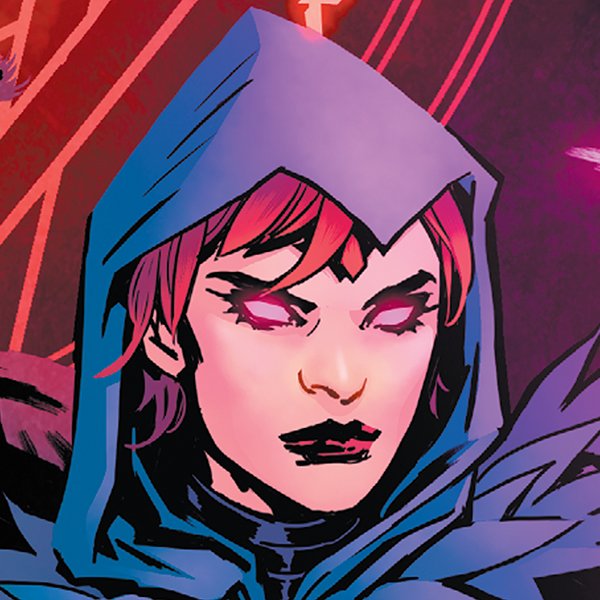 A founding member of the New Teen Titans, Raven, the Daughter of Darkness, fights for a world to which she fears she can never truly belong.

A founding member of the New Teen Titans, Raven, the Daughter of Darkness, fights for a world to which she fears she can never truly belong.

Families are never a walk in the park, but when your father is an actual, literal demon lord? Well, that’s a whole different story. And Raven would know. She’s got firsthand experience.

Born Rachel Roth to a human mother and a demonic father, Raven’s entire life has been a balancing act between the light and the darkness. Unwilling to succumb to her demonic heritage, she’s trained tirelessly to control and master her emotions, study the mystical arts and become a hero despite whatever destiny the demonic magic in her blood had intended for her. But demons are not so easily abated, and the persistent threat of her father constantly looms over her and whatever team of heroes she’s been a part of.

Reserved, distant and secretive, Raven’s never quite sure how close to let anyone get, or how much she can trust herself to maintain control. But those who do get close? They have a loyal and powerful friend in their corner for life...and sometimes beyond. 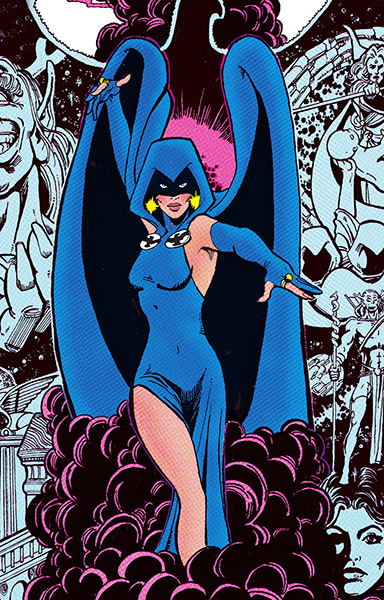 As she grew up in Gotham City, Raven’s mother Angela (later Arella) Roth fell in with a group of occultists who convinced her to participate in a ritual that would summon the demon lord Trigon to Earth. When Trigon did manifest, however, he took the form of a human man—not the monstrous, red giant she would later come to know as his true form. Arella was seduced by Trigon, married him and became pregnant with his child before he revealed the truth to her.

Horrified, Arella used the arcane teachings she’d learned to flee to a dimension between all forms of existence called Azarath. It was here that Raven was born. On Azarath, Raven was taken under the wing of a mystic named Azar who taught her to control her emotions in order to curb the energy in her bloodline. Azar’s theory was that any strong emotion—positive or negative—could potentially weaken Raven’s defenses and make her susceptible to Trigon’s influence.

But Trigon wasn’t so easily deceived. His looming threat would eventually force Raven to leave Azarath in search of ways to stop him once and for all, a process that would inspire her to become a Super Hero.

Under the teachings of Azar, Raven learned to become a powerful empath and mystic. By controlling her own emotions, she is able to reach out and read the emotions of others, obtaining a near-telepathic insight into their minds. This power comes at a cost, however, in that she’s not entirely able to ever disconnect from the people around her. Being around too many people with too many heightened emotions can be a risk, depending on the circumstances.

Raven’s also highly adept in other mystical arts, including the projection and manipulation of her “Soul-Self”—an energy she is able to cast out of her physical form. With her Soul-Self, Raven is able to use mystical abilities called “chaos magic,” hypnosis and limited telekinesis. She is also able to teleport herself and anyone in contact with her Soul-Self anywhere in space—occasionally including alternate realities or distant timelines.

When her Soul-Self is activated, Raven’s body transforms. Her skin becomes bright red and sets of glowing, orange eyes open on her forehead. In this form, Raven displays an even higher aptitude for chaos magic, as well as an increased physical strength and endurance—all at the cost of her control. In this form, Raven can be a pure destructive force. 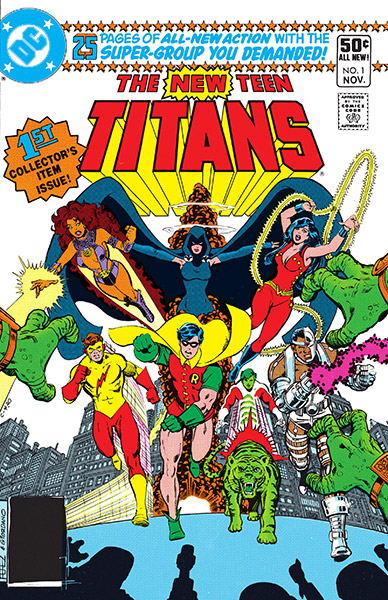 Raven was instrumental in the revival of the Teen Titans as a DC Super Hero team. When she learned through a vision that Trigon planned to invade and destroy Azarath, she traveled to Earth in search of heroes to help stop her father. Her first choice, for obvious reasons, was the Justice League. But Zatanna Zatara sensed her demonic ancestry immediately and raised suspicion about her motives. Desperate and with nowhere left to turn, Raven reached out to the former members of the Teen Titans and urged them to reform their group (NEW TEEN TITANS #1, 1980).

Even with the team working as a unit, Raven remained at arm’s length. She periodically returned to Azarath in secret to attempt to gather any intelligence about Trigon’s plans. Her success, however, was middling, and she was unable to keep her secret for long. Eventually the threat of Trigon would force Raven to confess her motivation in bringing the Titans together. Despite the confession and resulting feelings of betrayal, the team stuck together to face off against Trigon (NEW TEEN TITANS #4, 1981).

After Trigon was dealt with, Raven withdrew from the team’s spotlight. Even with her father out of the picture, she feared for her control—a fear that would prove legitimate in NEW TEEN TITANS #30 and #31 (1983), after she was kidnapped in a plot by the Brotherhood of Evil, prompting her demonic blood to take control. 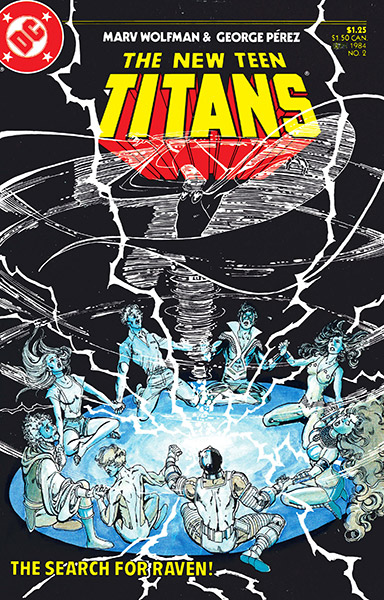 In 1984 the second iteration of NEW TEEN TITANS was launched, with a story arc, “Terror of Trigon,” that once again subjected Raven to the horrors of her father. Later, the continuity-shifting CRISIS ON INFINITE EARTHS (1985-1986) would find the Titans in even more chaotic shape, and Raven nowhere to be found.

It wasn’t until her mother, Arella, stepped in that Raven was recovered after the Crisis. In a weakened and vulnerable state, Raven had been kidnapped by the cult of Brother Blood and brainwashed into helping resurrect Trigon. Arella and Nightwing were both kidnapped in the process of trying to rescue her. But the rest of the Titans stopped Blood’s plans to resurrect the demon lord (NEW TEEN TITANS #27-31, 1987).

Trigon’s defeat gave Raven a new lease on life. She experimented with real, unfiltered emotions for the first time (NEW TEEN TITANS #39, 1988). But the tranquility was short-lived. In NEW TITANS #71 (1990), the “Titans Hunt” storyline began, resulting in Raven being kidnapped yet again; this time by the Wildebeest Society, possessed by lost souls from Azarath and hell-bent on resurrecting Trigon.

The fight was brutal and costly. It left Raven’s natural body corrupted and possessed by an evil alter ego and her “good” self trapped in spirit form. This “good” Raven would occasionally intervene in the machinations of the physical world, but was largely separated from her friends and comrades. 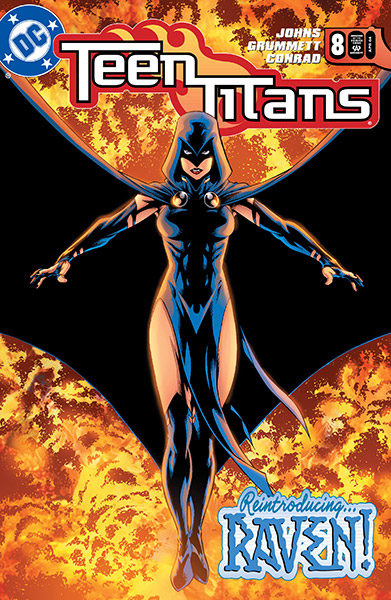 It was through another plot of Brother Blood and his cult that Raven was forced to regain corporeal form. Resurrected but implanted into a considerably younger human body, Raven was given a secret identity for the first time—the human alias Rachel Roth—and rejoined the newly reformed Teen Titans. Yet a lot had happened since Raven had been disembodied, and this team was not the group she’d worked so closely with before. Instead, it consisted of a younger generation of sidekicks who’d stepped up in the time she had been away.

But there were still some familiar faces around. Her old friends Cyborg, Starfire and Beast Boy had remained with the new team to act as mentors, and were able to help Raven gain a foothold in the new status quo. She remained with this incarnation of the team for several years, until the events of INFINITE CRISIS (2005-2006) pushed her to leave temporarily and attempt to live a normal life as a teen—a story told retroactively in the limited series RAVEN (2016-2017).

This attempt at normalcy was disrupted by Trigon yet again—or rather, by Trigon’s other children. The appearance of her demonic half-brothers forced Raven to band together with her former New Teen Titans cohorts Nightwing, Donna Troy, Starfire, Beast Boy and Cyborg to avert catastrophe.

Raven’s status quo was only partially reconfigured after the continuity-rebooting events of FLASHPOINT (2011). She was reintroduced as the daughter of Trigon, captured by the Phantom Stranger and turned over to her father to be raised as his “Black Bird of Terror.”

Later, Raven confronted the Teen Titans as an adversary (TEEN TITANS #16, 2013), but wound up betraying her father and joining the team as a hero. She remained with them until a devastating encounter with the villain Harvest forced the group to disband prior to DC UNIVERSE REBIRTH #1. 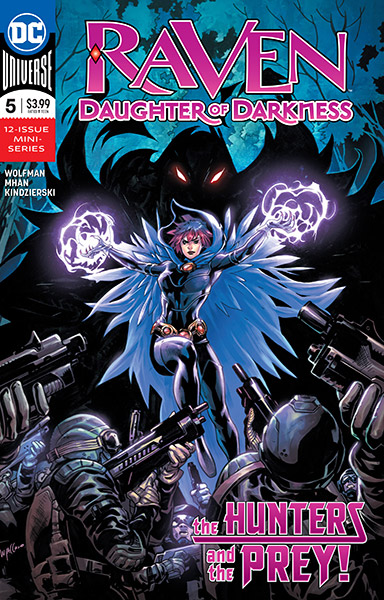 The events of Rebirth would prompt Damian Wayne, the fourth Robin, to reform the Teen Titans. Raven was among the first Super Heroes Damian recruited, after he found her trying again to live her life as a normal teenager, with lukewarm results.

Under Damian’s hypercritical eye, Raven reconnected with Beast Boy and Starfire, alongside the new Kid Flash and Aqualad, as the Teen Titans started fresh.