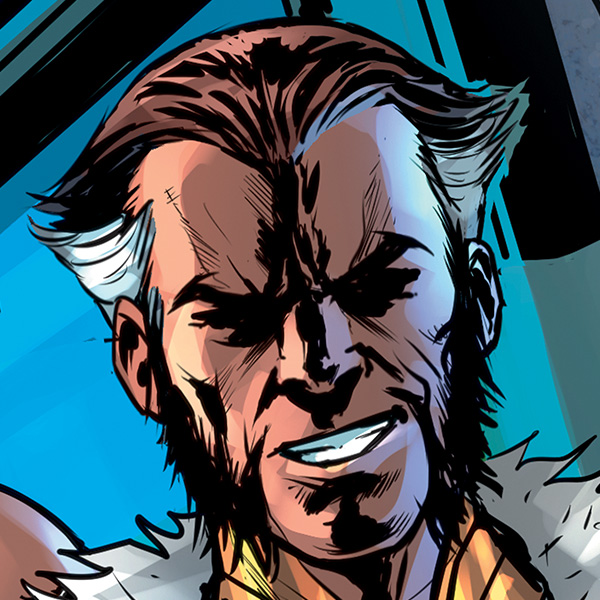 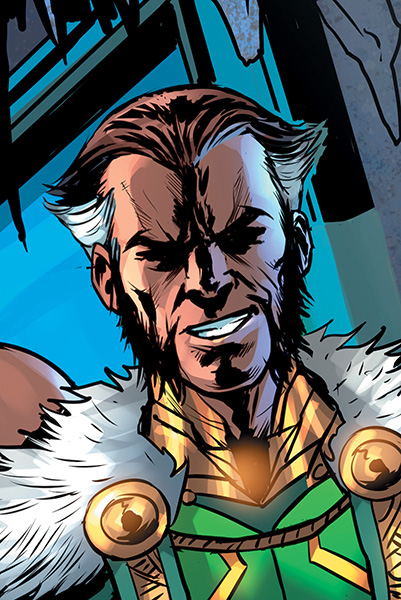 Leader of the League of Assassins and sworn enemy of the Batman, Ra's al-Ghul, a.k.a. The Demon's Head, seeks to purify the earth, no matter the lives it costs.

Leader of the League of Assassins and sworn enemy of the Batman, Ra's al-Ghul, a.k.a. The Demon's Head, seeks to purify the earth, no matter the lives it costs.

Batman has many foes, many of whom are wildly theatrical urban criminals. But Ra’s al Ghul is a Super-Villain of a different caliber. Hundreds of years old, Ra’s—which translates from Arabic as “the Demon’s Head”—is leader of the League of Assassins. He was born over 600 years ago, but thanks to repeated exposure to the mystical Lazarus Pits, he’s extended his lifespan many times over.

A dangerous idealist, Ra’s believes the perfect ecological balance can only be achieved by getting rid of a large portion of the human population. To this end, he's orchestrated numerous attempts at genocide, bringing him into direct conflict with the Batman.

Despite his obvious enmity for Batman, Ra’s sees him as a worthy adversary. For years he tried to have Batman wed his daughter Talia. And although he learned Batman’s secret identity before their first meeting, he refuses to reveal it out of respect for the man he simply refers to as “Detective.” Now the two are bound by blood, as Bruce Wayne and Talia’s son Damian is the grandson of Ra’s al Ghul. But regardless of their familial connection, Batman knows Ra’s is never to be underestimated or trusted. He remains one of the greatest threats the DC Universe has ever known.

The man who would be known as Ra’s al Ghul was born over six centuries ago, to a tribe of nomads somewhere in the Arabian desert. Interested in science and the study of nature, Ra’s left his tribe and went to live in a city, where he became a doctor and married a woman named Sora, whom he has described as the great love of his life.

It was during this time that Ra’s discovered the secret of the life-extending Lazarus Pits, and he saved a dying prince by lowering him into one. Although the pit revived the prince, it temporarily drove him insane, and he strangled Sora to death. The local king, father of the mad prince, refused to acknowledge his son’s act, and instead blamed Ra’s, whom he sentenced to a slow and torturous death in a cage, alongside Sora’s corpse.

Ra’s, however, was set free by the son of an elderly woman whom he had treated as a doctor, and whose suffering he had eased in her final days. Ra’s then set forth to find the nomadic tribe he was born into, and convinced his uncle, by then the leader of the tribe, to help him in his quest for revenge. He used scientific knowledge centuries ahead of his time to create a virus, one that infected the young prince. When the king begged Ra’s to heal his son once more, Ra’s killed them both, and he and his tribe razed the city to the ground, killing all of its inhabitants. Shortly thereafter, Ra’s declared himself “the Demon’s Head,” after desecrating the altar of the ancient Egyptian demon-god Bisu. 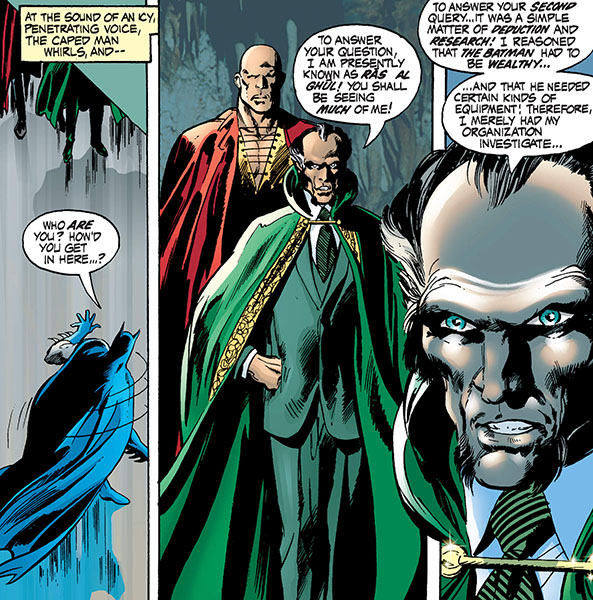 Over the next several hundred years Ra’s traveled the globe, mastering various forms of combat. He kept the existence of the Lazarus Pits a secret, and built a vast organization that he called “the Demon,” after his own sobriquet. This organization had many branches, most famously the League of Assassins, also known as “the Demon’s Fang.”

Eventually Ra’s came across a place called Infinity Island in the Indian Ocean, which had a Lazarus Pit of its own. After conquering the island’s inhabitants, he made it his base of operations, and used its Pits to continue extending his life. One day his island, which he’d thought was unknown to the rest of the world, was bought by billionaire Bruce Wayne. Determined to acquire Wayne’s business empire, Ra’s discovered that Wayne was in fact the Batman.

Ra’s created an elaborate ruse to see if Batman was worthy of his daughter Talia’s hand in marriage, and to be his heir. He faked Talia’s kidnapping, and used it as a test of Batman’s intellect and skills. Batman solved the puzzle, impressing Ra’s with his ingenuity. Though he was attracted to Talia, upon learning of Ra’s al Ghul’s criminal empire he rejected the idea of marrying her.

Ra’s has since come into conflict with Batman many times over the years. Often during these confrontations, Ra’s has appeared to die—only to cheat death once more, thanks to the Lazarus Pits. 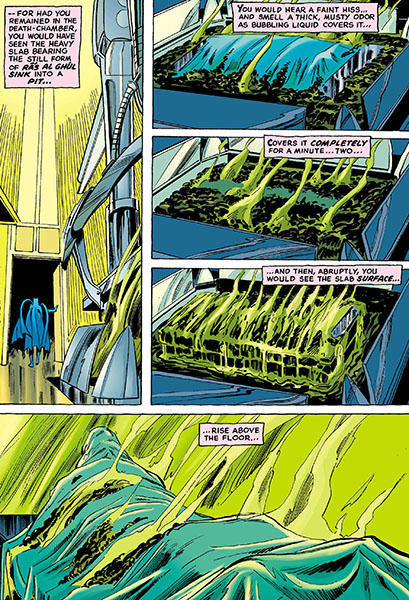 Ra’s al Ghul has accumulated a vast wealth of knowledge over the centuries, including various forms of physical combat, especially the martial arts. He’s also an expert swordsman, nearly unmatched in the world. With his genius-level intellect, Ra’s has become an expert in all the known sciences, as well as an astute detective.

But Ra’s al Ghul’s greatest asset is his use and control of the Lazarus Pits, ancient wells that grant him the ability to achieve a longer-than-natural lifespan every time he bathes in one, as well as enhanced speed, strength, stamina and durability. An unfortunate side effect of using the Pits is temporary insanity, with the possibility of prolonged mental illness from extended exposure. Ra’s also possesses a vast knowledge of mysticism and magic, which he used to transfer his consciousness into another body when his original form had died. 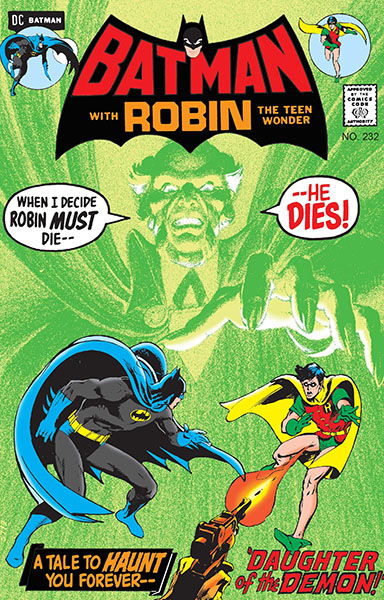 Ra’s al Ghul first appeared in 1971. In his first appearance, a group of mysterious kidnappers targeted both Batman’s partner Robin, who was then Dick Grayson, and Talia al Ghul, Ra’s’ daughter. Ra’s and his manservant Ubu approached Batman about joining forces to solve the kidnapping, and in doing so informed him that they knew his true identity of Bruce Wayne.

After following every clue and lead, Batman discovered that the kidnappings were in fact staged by Ra’s, in order to see if Batman was a great enough detective to figure it out and therefore be worthy of marrying his daughter. When Batman rejected this offer, despite having real feelings toward Talia, it began an acrimonious relationship between the two men that continues to this day.

After many conflicts over the years, Ra’s al Ghul came close to his goal of ridding the Earth of the bulk of humanity. His organization released a deadly virus called the Ebola Gulf, or “the Clench,” in Batman’s home of Gotham City. Eventually Batman discovered a cure for the virus, and then discovered that it was Ra’s al Ghul who was responsible for it.

As Batman traveled all over the world in an effort to prevent other outbreaks of the virus, Ra’s teamed up with the man who broke Batman’s back, the criminal known as Bane. It was Ra’s’ hope that Bane could marry Talia and become his new heir. But Talia loathed Bane. Batman eventually discovered a way to completely defeat the Clench virus thanks to an ancient artifact called the “Wheel of Plagues.” This artifact had given Ra’s the knowledge he needed to help create the disease. Although defeated once more by his dreaded adversary, Ra’s al Ghul nevertheless again evaded being brought to justice. 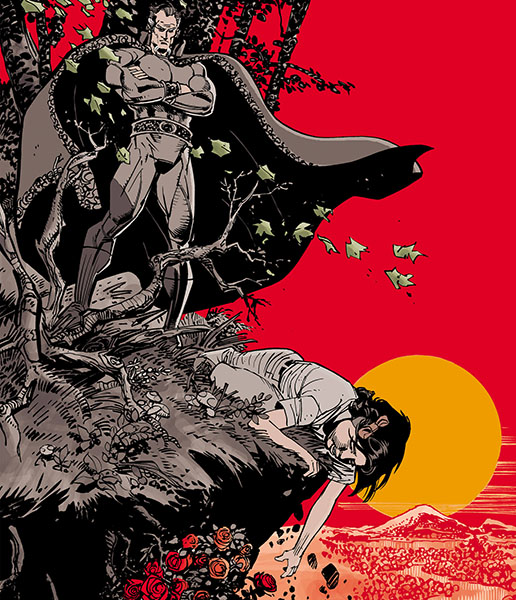 Although Ra’s’ beloved daughter Talia was well known to his friends and enemies, he had another child, Nyssa Raatko, whom he had abandoned during World War II. Bitter her whole life toward Ra’s, she began an elaborate plot to destroy her father, which forced Ra’s to call a truce with the Batman. Ra’s made a deal to allow Batman access to a Lazarus Pit to give him superior strength in order to fight Nyssa and her subordinates, while also giving Batman access to a serum that allowed him to make contact with the spirit world and see his parents. Nyssa contacted her sister Talia, and then kidnapped and brainwashed her. Ra’s seemingly died (again), and Nyssa and Talia became the dual heads of the Demon, taking over Ra’s’ vast empire.

After Ra’s’ death, his daughter Talia revealed to Batman that she had borne him a son, Damian Wayne, who would end up becoming the fourth young man to go by the name Robin. After some time Ra’s al Ghul returned. It was revealed that his consciousness had survived his death, and he’d transferred it to a new host body. That body, however, was dying, and he needed to be transferred to another, even more youthful one—his own grandson, Damian. Although Damian avoided being overtaken by the mind of his grandfather, Ra’s found a way to transfer his consciousness into the body of the White Ghost, the code name for his estranged, albino son, Dusan. 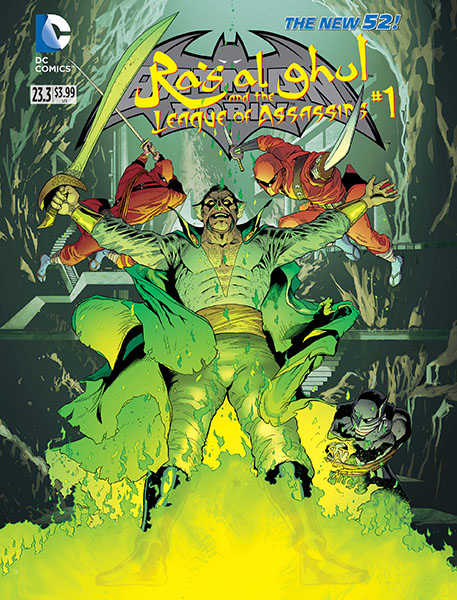 In the DC Universe that was reimagined following the events of 2011’s FLASHPOINT, Ra’s al Ghul was still the founder of the League of Assassins. But in this new reality, Ra’s was also part of an organization that went by the name “the Untitled.” Ra’s al Ghul built a city, Eth’Alth’Eban, over the Untitled’s Well of Sins, which was the very first Lazarus Pit. Through the Well, Ra’s managed to create his own Pit, which was how he had managed to exist for hundreds of years.

In the Rebirth era, it was revealed that Ra’s al Ghul had created an offshoot group from the League of Assassins, which he called the League of Shadows. To lead this second deadly team, Ra’s appointed the cunning Lady Shiva. But once Lady Shiva found out about Ra’s’ genocidal purpose for the League of Shadows, she turned against him. When Lady Shiva came to Gotham City with the Shadows, Ra’s met with Batman, apparently trying to help him take them down, although it was later revealed that Ra’s had made a deal with Shiva, in exchange for Batman. Although he didn’t get his hands on the Bat, Ra’s is still at large, formulating his next plan for global genocide.