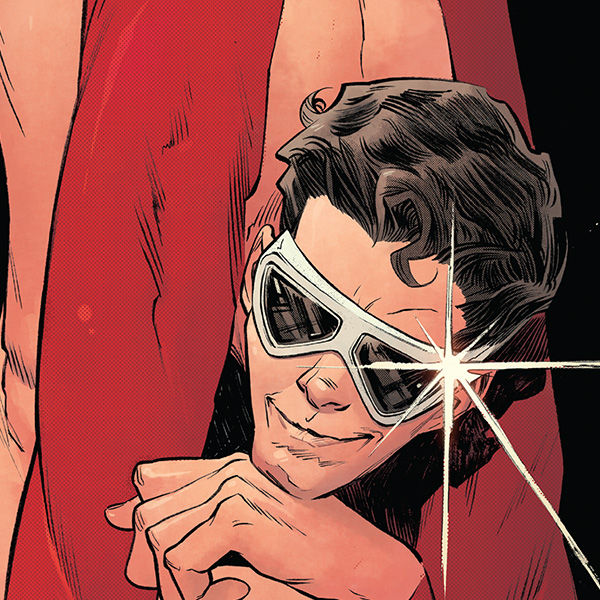 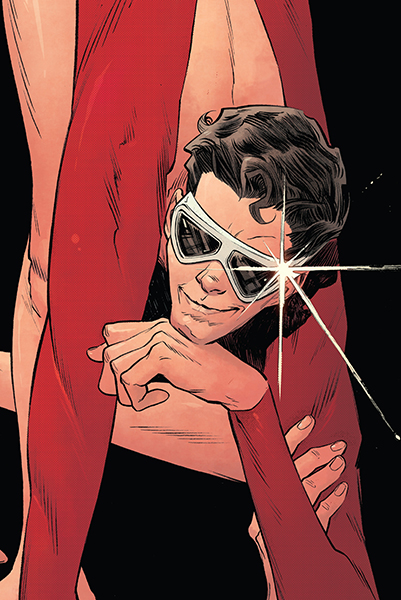 Eel O'Brian abandoned a life of crime when an accident rendered him the world's most pliable policeman, the fantastic elastic avenger Plastic Man.

Eel O'Brian abandoned a life of crime when an accident rendered him the world's most pliable policeman, the fantastic elastic avenger Plastic Man.

The DC Universe’s oddest Super Hero started his life as a dyed-in-the-wool pinstriped criminal, who used his ability to take the shape of literally anything to become the wacky Pliable Paladin—Plastic Man! His powers of malleability and shape-changing let him become practically anything: a lamp, a rug, a dog. Be careful: he could even be the living room sofa you’re sitting on!

To reflect Plas’s wacky powers, he has an equally odd sense of humor and always bounces back with puns. It’s on display whether he’s fighting one of his oddball enemies, or trying to get a laugh out of his fellow superheroes. His background as a former denizen of the  underworld gives him a unique insight into solving crime, and he is effective as both a detective and undercover agent. He really is the “weirdo” when hanging out with his fellow Super Heroes or Justice League members, but they recognize how that quality gives him a distinctive perspective—even if it is a stretch.

Plastic Man may have the weirdest powers this side of the Multiverse, and a quirky personality to match, but he also has one of the biggest hearts of all the Super Heroes—and he doesn’t even have to inflate it with his super powers!

During a heist on a chemical plant, criminal “Eel” O’Brian was shot in the arm by a night watchman, and then got doused in a mystery chemical. The heist went further south when, abandoned by his cohorts, “Eel” wandered away from the city, and passed out at the foot of a mountain. A nameless monk saved “Eel” to give him a second chance at life. Stretching his arms in bed, “Eel” makes a shocking discovery: he can stretch his body parts like rubber, and can even sculpt his features like putty. Using this ability to change his form, he becomes the Super Hero Plastic Man, and vows to use his newfound second chance to good use fighting crime.

After taking in his old gang, Plastic Man eventually abandons his “Eel” O’Brian identity while fighting crime and becoming an outstanding (albeit pliable) citizen. He teams up with Woozy Winks, a reforming pick-pocket, and the two embark on countless adventures against the weirdest the world has to offer.

Ironically, this most inimitable of Super Heroes uses his power to imitate anything and surprise his quarry. Whether he’s a desk, chair, or household pet, Plas always retains the trademark red and yellow band of his distinctive costume. 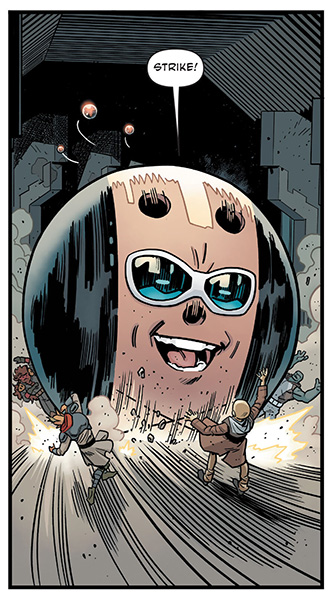 Plastic Man has the ability to alter and shape his body into whatever form he wants, thanks to a combination of malleability, elasticity, and total body control. He can stretch his body and skin outwards and become flat as a pancake, or even condense his body mass to seemingly shrink down into a portable size. His ability also lets him grow to ginormous proportions, and dwarf even the largest opponents.

Plas also stretches his legs out to great lengths, allowing him to make a long-legged run across city blocks.

His rubbery nature also allows bullets and projectiles to bounce off him, rendering him seemingly invulnerable. Because of this mastery, he can also resculpt his face and form, allowing him to convincingly go undercover. The downside is his inability to change color, leaving each object he forms to have the same color scheme and design as his stretchable costume.

Plas also seems to not age, and its highly possible he could outlive all of the other DC Universe Super Heroes. This may also be from his regenerative abilities, which allow him to reform body parts and even internal organs.

Perhaps Plastic Man’s greatest ability is his keen deductive mind: Thanks to his former life as a criminal, Plas knows how one thinks, and uses it to his advantage while solving crime or (with his shapeshifting ability) going undercover.

Plas is susceptible to intense heat and cold, as well as some chemicals. 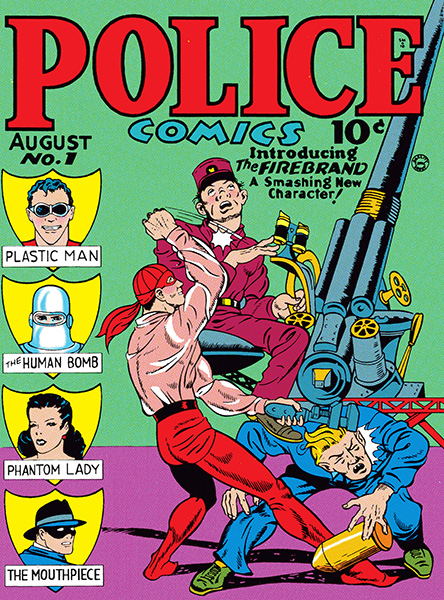 Plastic Man was introduced in POLICE COMICS #1, where he starts the story as “Eel” O’Brian, and gains his super powers during a heist gone wrong. After meeting and teaming up with his sidekick and pal Woozy Winks, Plas faces off against a bevy of weirdo villains. It doesn’t take long for Plas to enjoy his new life as a crimefighter, working hard to stop the weirdest of bad guys. 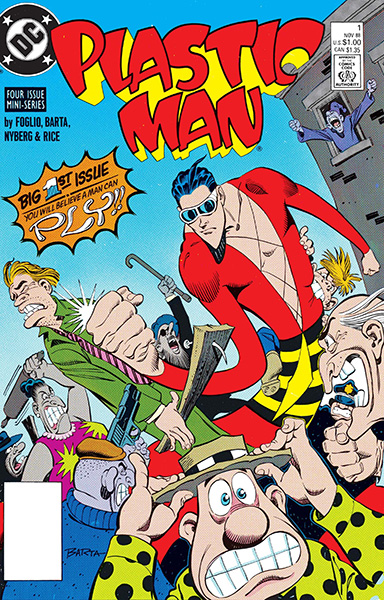 Following the events of 1985-1986's CRISIS ON INFINITE EARTHS, the DC universe's history was rebooted. Eel O’Brian still gained his powers in a heist gone wrong, but now wandered the streets afterwards as a shape-shifting “monster”. It was only when O’Brian met newly released mental patient Woozy Winks that his life turned around. Deciding off a coin toss, “Eel” decided to become a DC Super Hero and use his powers for good. 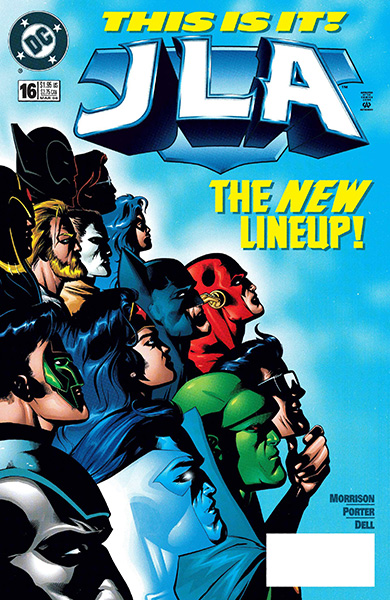 Plastic Man is recruited into the Justice League by Batman, and proves himself a formidable team member, in spite of his crazy puns and off-beat humor. Plas proves a dependable and regular member of the JLA, and faces off against foes such as Ra’s al Ghul and Dr. Polaris. He does hold the distinction of nearly getting a beat-down when he posed as Big Barda’s new red dress.

Plastic Man is stranded thousands of years in the past during a mission, where he becomes frozen and shattered, his body parts scattered across the ocean floor. When he is recovered and restored in the present day by the JLA, after 3,000 years of trying to piece back together, Plastic Man leaves the JLA to focus on his personal life. Blocking Plastic Man from his mind, he continues life as “Ralph Johns”. Plas also reveals he is a father, to a son named Luke. During his JLA membership, Plastic Man comes to terms with his estranged son, who at one point turns to the gang life.

When the JLA are faced with a mentally unstable J’onn Jonzz, Batman appeals to Ralph Johns and brings his Plastic Man side out. Immune to the Martian’s telepathic control, Plastic Man is able to stop J’onn -- and save the world. 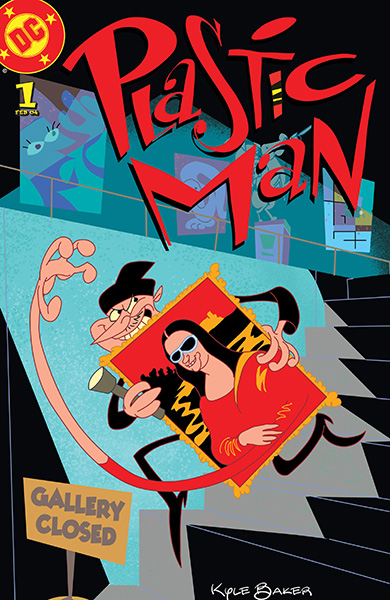 In his own comic series, existing outside of main DC continuity, Plastic Man is an FBI agent not only tasked with hunting down “Eel” O’Brian, but must also contend with a new partner, Agent Morgan! Plas’s past life is discovered, and he goes on the run from the law.

Plas clears it up with the law, becomes an agent once more, and has a roster of wacky adventures, from time travel to adopting a teenage vampire girl named Edwina.

Plastic Man comes to the aid of his son, now operating as Offspring, during the One Year Later storyline. Plas continues as a superhero, facing off against JLA villain Prometheus, who injures Plas with a chemical injection. The Pliable Paladin is unable to shift without suffering great pain; this remains through the events of Blackest Night, where Plas’s heart is literally torn out of his chest by the Black Lantern version of Vibe. Plas recovers and is soon back on his rubbery feet, with his condition either cured or in remission.

“Eel” O’Brian is re-introduced in 2014's JUSTICE LEAGUE #25. When the Earth-3 version of Batman, the villainous Owlman, breaks up a gangland meeting in a factory, “Eel” is shot and heavily doused in toxic chemicals, which turn him into a pile of goo. 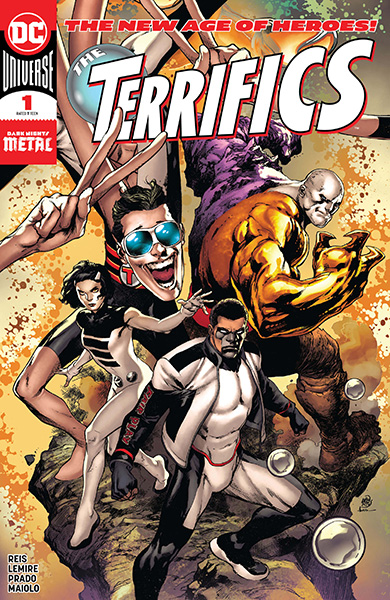 During 2017's DARK DAYS: THE FORGE #1, Batman brings Plastic Man, kept in containment in the shape of an egg, planning to release him to help with his mission against Barbatos and the Dark Multiverse.

After the events of Metal, Plastic Man becomes a member of The Terrifics, a quartet of unlikely Super Heroes, led by Mr. Terrific and with Metamorpho and Phantom Girl. Plas starts the first issue still in egg form, but eventually gets back to his old rubbery self.